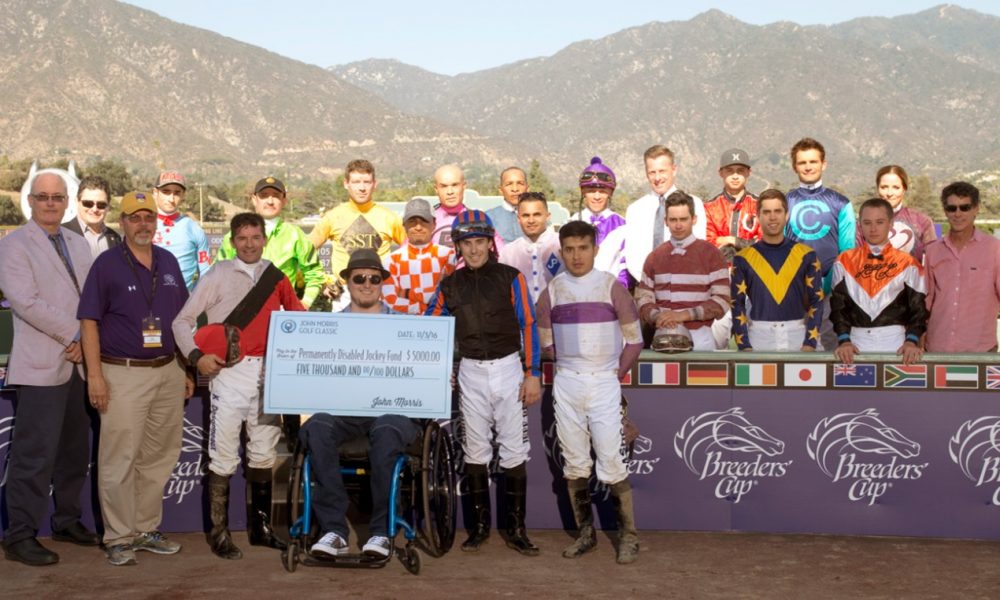 Today we’d like to introduce you to Joe Morris of The Stronach Group.

Joe, can you briefly walk us through your story – how you started and how you got to where you are today.
Welllll….It goes back many, many years, on a very cold day, in the state of Maine. I was born into horse racing. I grew up on a horse farm. The Norton Farm (my mother’s maiden name), a Standardbred operation, is the longest continually run farm, by the same family, in the state of Maine. We had about 90 horses, 30 in racing at all times and the rest part of the breeding operation on top of that.

So that’s where I started, at the age of 12, walking horses, jogging horses, cleaning stalls, etc. I continued to work on the farm and even paid my way through college. I learned quickly that I liked heating in the winter and having air conditioning in the summer and knew I wouldn’t be getting either of those things working on the backstretch of a track or on the farm so, I got a Business and Finance Degree (from the University of Maine in Orono) and when I got out of college I went to work for the Sullivan Family.

The Sullivan Family owned the Hinsdale Racetrack, which was a Harness racing track and also a Greyhound racing track. They also owned Sullivan Brothers printers and their cousins owned the Patriots. I was at Hinsdale for a time and at 23 was the youngest associate judge in Harness racing, which was a first. I went on to Foxborough Racetrack and at 24 was assistant general manager and at 25 was the general manager of a track just 20 miles from Boston. I ran that track and that’s when we started simulcasting. So we were able to offer our fans simulcasting of the Breeders’ Cup, the Kentucky Derby, etc. and when I went back to Hinsdale, we became one of the first track’s to do multi-track simulcasting. Through that, I got to know other tracks throughout the country and the different breeds, namely Thoroughbreds as well.

My kids were going through school around the time I left Hinsdale, a very small town, so at the end of the 1990’s I decided we should move back to Maine, to our big family, and didn’t really know what I was going to do from there.

I ended up going to work for EquiSource, which was owned by the NTRA (National Thoroughbred Racing Association) and Churchill (Downs, where the Kentucky Derby is run each year) and that turned into NTRA Purchasing which was based in Maine, so I was able to stay there and ran that company.

It was based on group sales and sponsorships for the Thoroughbred industry. We sold the John Deere deal, the Dodge deal and that company grew to the point that I had to move to Lexington, KY since I was there a few weeks out of every month anyway and traveling the rest of the month. From 2002 to the middle of 2007, we were able to grow EquiSource from a 9 million dollar product sales company to a 117 million dollar company. Those were companies that sponsored horse racing and we expanded that to include Quarter Horses, the National Equestrian Federation, the United States Trotting Association, Equine Canada, etc. and that broadened the scope of where and who we were selling our horse products to.

Our sponsors were John Deere, Dodge, FedEx, Net Jets and all were tied to the Breeders’ Cup World Championships. Breeders’ Cup sponsorships at that time were around 14 million and the product sales we were doing were 117 million and brought in over a million to the NTRA so…all in all it was a really good run and helped bring in some national companies and brands to the industry.

When NTRA and the Breeders’ Cup split, it presented an opportunity for me to go into the publishing business. I went to work for BowTie Publishing (a pet publisher) and they had Thoroughbred Times, one of two weekly magazines for horse racing plus Thoroughbred Today, which was a digital daily. They also had a stallion registry and Horse Illustrated, which was the largest all-breed, all-discipline horse magazine in the country and others, including a youth horse related magazine.

I left that company in 2011 and came to The Stronach Group, working across all the properties (Santa Anita Park, Gulfstream Park in Hallandale, Fl, The Maryland Jockey Club – Pimlico Racecourse in Baltimore, Golden Gate Fields in Berkeley, CA, and Portland Meadows in Oregon) selling sponsorships and helping the tracks where it made sense. The general manager of Golden Gate quit during my time and I actually ran Golden Gate for a bit as well.

I was recruited by the Thoroughbred Owner’s of California and moved from San Francisco to the LA area to be the president of the organization, which I did for about two and a half years. I was then asked to come back to The Stronach Group and asked to lead the West Coast Operations on the day to day side of things. The two years I had done with The Stronach Group before, I had liked. I liked the senior management and liked the company, so it was a very easy decision. It was a perfect fit for me to come back.

Alright – so let’s talk business. Tell us about (The Stronach Group owned) Santa Anita Park – Los Angeles Turf Club – what should we know?
We’re known for Entertainment. Yes, we have and we offer Live Thoroughbred Horse Racing but really, we’re an entertainment business. We offer a day, an event, an experience. On any big day, we have a multitude of different experiences that you can partake in as a fan whether you’re an established and dedicated regular or you’re an absolute newbie. From Trackside beer festivals, infield concerts, a luxury loving day in our Chandelier Room and/or newly renovated suites, our Turf Terrace restaurant, etc.

We offer more than just one way to sit, to see and to experience everything that is Horse Racing and we do it in a way that is unlike any other track in the country.

I’m most proud of our people putting on the show. The employees and the backstretch workers, who get the least amount of recognition. Horses are an eight day a week job. I know there are only seven days but it’s an eight day a week job. Doesn’t matter what the weather is like, doesn’t matter how you feel, those horses need to be taken care of and I’m so proud of the people that do that. Here at Santa Anita, we do that at the absolute highest level in the country. There is no higher level of racing than what we provide right here and the owners are the same way. Our jockeys, our trainers, our backstretch workers are all the operating at the highest level, every day.

I’m also proudest of what The Stronach Group and Keith Brackpool have done on this side, the grandstand/business side here at Santa Anita. This track is going into its 83rd year and it was getting a little tired a few years ago. Keith has done a masterful job of making this property relevant again to the LA market and has renovated areas to launch this structure and this property into the next 83 years.

He has listened to the wants and the needs of those looking for an experience in the LA market. We fit into other offerings now. We are relevant, we are competitive. Whether you want to compare us to baseball, football, soccer, art, museums….You come here and it’s historic. The land is historic, the racing is historic, the architecture is historic. That’s a joint effort from the ownership of the track, to the management, down to the core of our employees that work here each and every day. I’m very proud of that whole group because it’s a best in class.