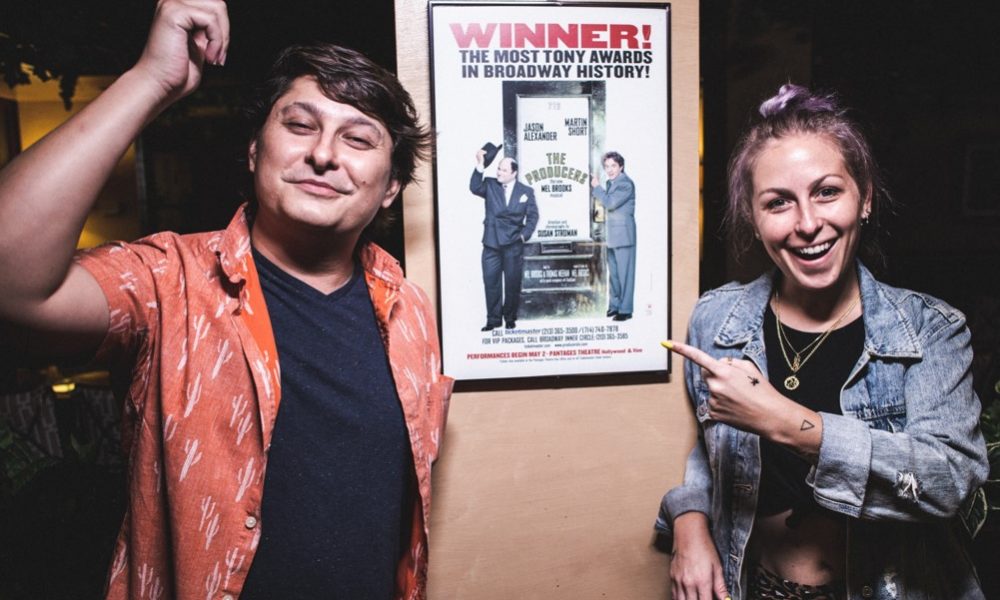 Today we’d like to introduce you to Jessica Mulder.

Jessica, before we jump into specific questions about your work, why don’t you give us some details about you and your story.
I was born and raised in Curaçao (a Dutch Caribbean island) until I was about nine years old before moving to Fort Lauderdale, Florida with my mother and brother after our parents got divorced. Once I graduated high school I went to college at UCF in Orlando, where I didn’t really know what I wanted to do with my life but not going to college wasn’t an option to my parents.

After I graduated, I was trying to find work under my women’s studies/criminal justice degree but wasn’t really finding much, and even if I did I still wasn’t really sure what I wanted to do. A friend of mine at the time just started an internship in NYC and told me I should just move up there and share her room with her since I wasn’t doing anything else worthwhile. Instead of move back home, I took the offer and up and moved to New York with about $500, a suitcase and a laptop.

Once I got to NY, I got several part-time jobs, serving/bartending, working as an intern at an art gallery, and canvassing for NARAL (which was the WORST considering it was winter and getting the door slammed in your face 100 times a night in 20 degree weather is not a fun time). Once I was there I had the urge to try stand up comedy (I had joined the comedy club in college but was always too scared to go to any meetings), I mentioned it to a good friend of mine and she encouraged me.

After testing my really crappy material on a couple of my friends in my apartment (horrifying), I started going to open mics regularly. I was still pretty aimless even though I loved comedy, I just never thought it was something I would pursue seriously, especially given that my family was more business-oriented and things like that were considered more of a hobby than an actual career.

I stayed in New York working in entertainment, honing my graphic design skills (something I always had fun doing) and working odd jobs here and there for about five years until deciding I wanted to get out of the cold and move to Los Angeles. My boyfriend at the time was interested in moving also but had some family health issues to deal with first, so we decided to move to Pennsylvania together for a few months and help out, save money and then keep trucking over to LA.

Going to your first few open mics can be hard, but I imagine it laid the path forward to help you get to where you are today?  Has it been an easy path overall and if not, what were the challenges you’ve had to overcome?
Definitely not a smooth road. Aside from the typical insecurities of wanting to “make it” in entertainment and feeling insignificant in the grand scheme of things, sharing an air mattress for several months until having a falling out with that friend and sleeping on more floors until I got my own place, my short pit stop in Pennsylvania that was supposed to last about three months or so turned into three years when the health issues we were dealing with got worse.

His sister was fighting Hodgkins Lymphoma and it was such a rough situation to be in. I was living in someone else’s parents’ house, sleeping down the hall from someone who was dying but didn’t know it because she was also special needs and wouldn’t be able to understand. It took a lot of emotional energy and was a struggle to pretend things were okay when you just knew they weren’t.

The relationship wasn’t going well either, my life in stand up and entertainment in LA was on hold, and I just didn’t have the energy to try and make something happen in Pennsylvania because frankly, nothing was funny to me at the time and I was very depressed. I was struggling with panic attacks and depression and just thinking, what am I doing with my life? Do I even want the things I wanted before? I just was not happy, but at the same point, I felt bad leaving the situation and people I cared about just because I couldn’t handle it. So I stuck it out, and eventually, his sister died, which although horrible and sad, it was bittersweet because finally, we could move on with our lives.

Things were looking up, quality of life got better, and he proposed to me and I accepted. We got married and used the money we saved and got as gifts from the wedding to move to LA. I felt like I could now finally start my life, got offered a full-time job with the company I was doing freelance design for just in time to move to LA, so it seemed like everything was finally falling into place. That was until I got divorced about a year into living in LA.

I won’t get into TOO much detail on this, but it was bad. I started going to therapy, since I was very depressed again and felt super lost, questioning all my decisions and what I was even doing in Los Angeles in the first place. I ended up needing to get away from the relationship completely during that time and put an ocean between us by moving to Holland for six weeks. I rented someone’s art studio that she turned into a quasi-studio apartment for me and worked remotely from there as I practiced my Dutch and just cleared my head. I knew a little bit from when I was little living in Curaçao, but mostly lost the language and it always bothered me. Despite the depression following me to Europe, I had an amazing experience over there and…even though I incurred a lot of debt, that trip was one of the best decisions I ever made.

When I came back, I moved out within a week and felt like….FINALLY…NOW I can actually do what I came here to do. But then, I had a mental break down (as you do), and really needed to spend a couple of months recuperating from the past year. I kept seeing my therapist, and then one day I was having some annoying issues going on with my ex and the whole divorce paper process in LA (they make you wait six months to finalize it in case you change your mind, which was driving me NUTS because I just wanted the whole thing to be over), so I wrote a joke about it and found the closest open mic to try it out which was a place called Karma Lounge.

Karma Lounge would then become my sort of comedy home base, I started hosting a weekly open mic thereafter I filled in for another comic and Igor, the owner, offered me a chance to do one on my own. He said if it went well, I could do it every week. After the first show went well, I got to do a weekly residency which I did for about a year until the place went out of business. Although it was defeating to lose something that I had spent a year working on, during that time I had built up my material, had been growing a great community of comedians, and ended up starting a new weekly show/open mic at the Hollywood Hotel.

Getting a weekly residency where one didn’t exist until you stepped up is definitely inspiring. We’d love to hear more about your work. What are you currently focused on and what else should we know?
I host a weekly stand up comedy show/open mic every Tuesday at the Hollywood Hotel called Hollywood Nights. After a couple months of running it myself, I asked one of my best comic friends Landon Hughes to start hosting with me (I had been trying to get him to do something with me for over a year and he finally agreed!). Adding Landon to the mix made the show SO much better.

Aside from sharing the workload, we work so well together, and in a world where open mics are supposed to be terrible and boring and nobody wants to hang out, I think we’ve done a really great job of making it a supportive (yet not easy by any stretch) room where we enjoy performing there every week, and it’s really been a positive staple in my life. We’re always coming up with new ways to spice things up, whether it’s a theme show where people have to do a minute of a certain material, having a costume party or hiring a photographer to take good photos of people performing (mine are the worst).

We recently started hiring Andrew Max Levy and he’s AMAZING, it’s given a lot more cred to the photos which you can see in this article (all photos I’ve included are his work). It’s been a blast and I’m really glad that I have the ability to do this every week (shout out to Jonny at Hollywood Hotel for letting us do any crazy idea we come up with).

I also recently started my own podcast with my other comic friend Nick Kaminsky. I’d been on some other podcasts and although I liked doing them, I just didn’t have a good enough idea that I wanted to run with until recently. I had always joked that my first special would be called “The Hard Way” because that’s how I learn everything, so it was just natural to make the podcast about that. I wanted to do something real and authentic where people could have the opportunity to tell true stories about their lives and just vent the frustration of making stupid mistakes but still powering through and not giving up in the end, and so far it’s going great.

We’ve recorded six episodes of The Hard Way Pod so far and are recording a new one each week. Each episode is framed under a “Don’t” — like “Don’t Sh*t Where You Eat” (Episode 3) and Nick and I bring on a guest and we all tell a story (or a few short ones) where we made the mistake and what we learned from the situation. It’s been hilarious and therapeutic at the same time.

Other than those main projects, I work as a Creative Director for a consulting company in South Florida and do nearly all the graphic design for them as well as our clients because it’s a small company. My design and editing skills have come in super handy with making show fliers and all the technical and graphic aspects of the podcast. Who would’ve thought I would accidentally teach myself a valuable skill while at college getting a degree for something completely different…just because I liked it. Let’s face it I was never gonna be a lawyer.

Is there a characteristic or quality that you feel is essential to success?
I’d say the characteristic most important to my success is my work ethic and determination. Despite being “a creative,” I’m super organized and kind of a workaholic.

If I have an idea or a goal, I have to do it, and I will figure out every detail and just make sure it gets done or I won’t be able to sleep or relax until I do. It’s definitely a big part of any success I have, but I could stand to release some of the control to my partners in crime at times since I tend to take on more than I should. 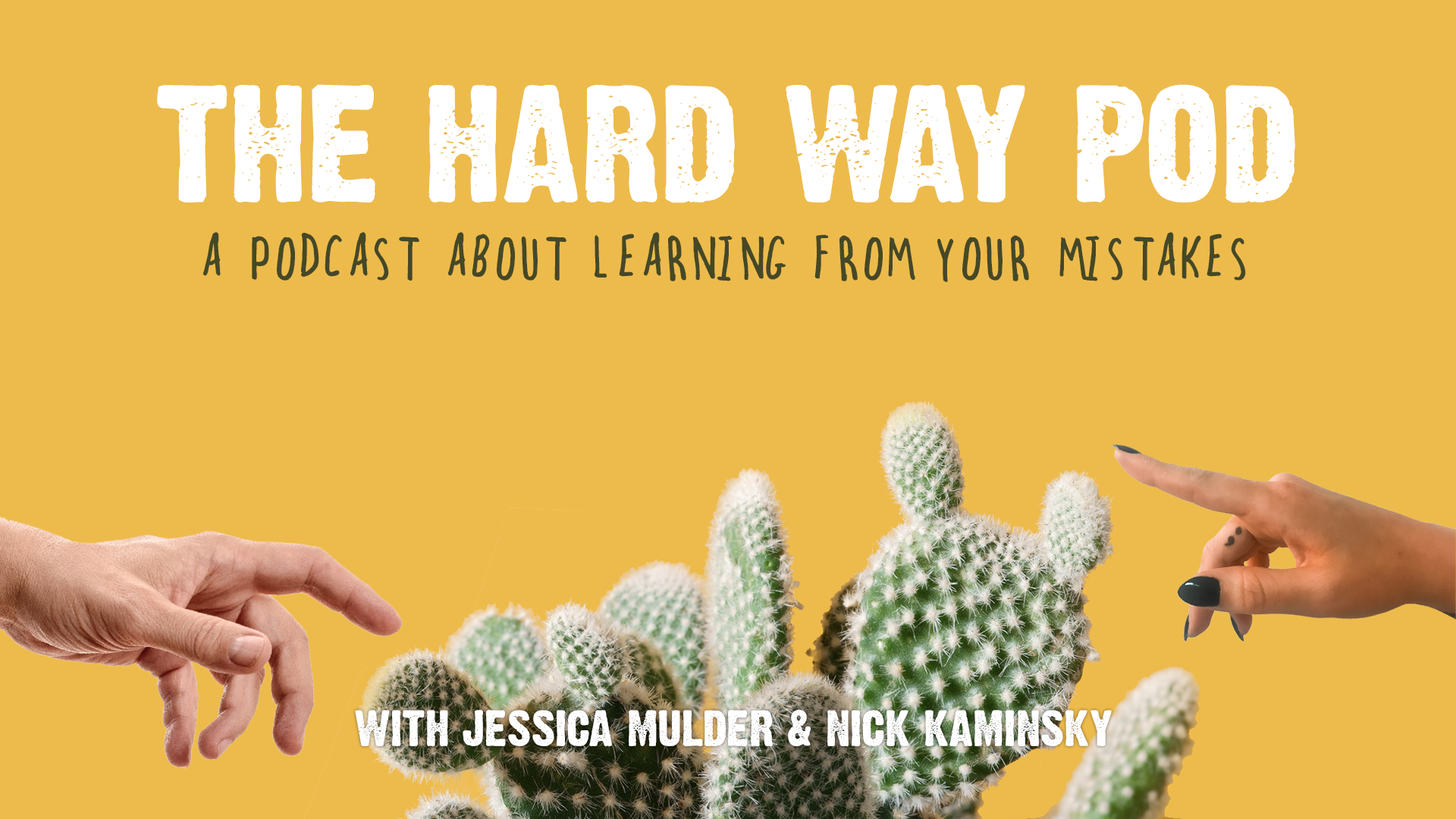 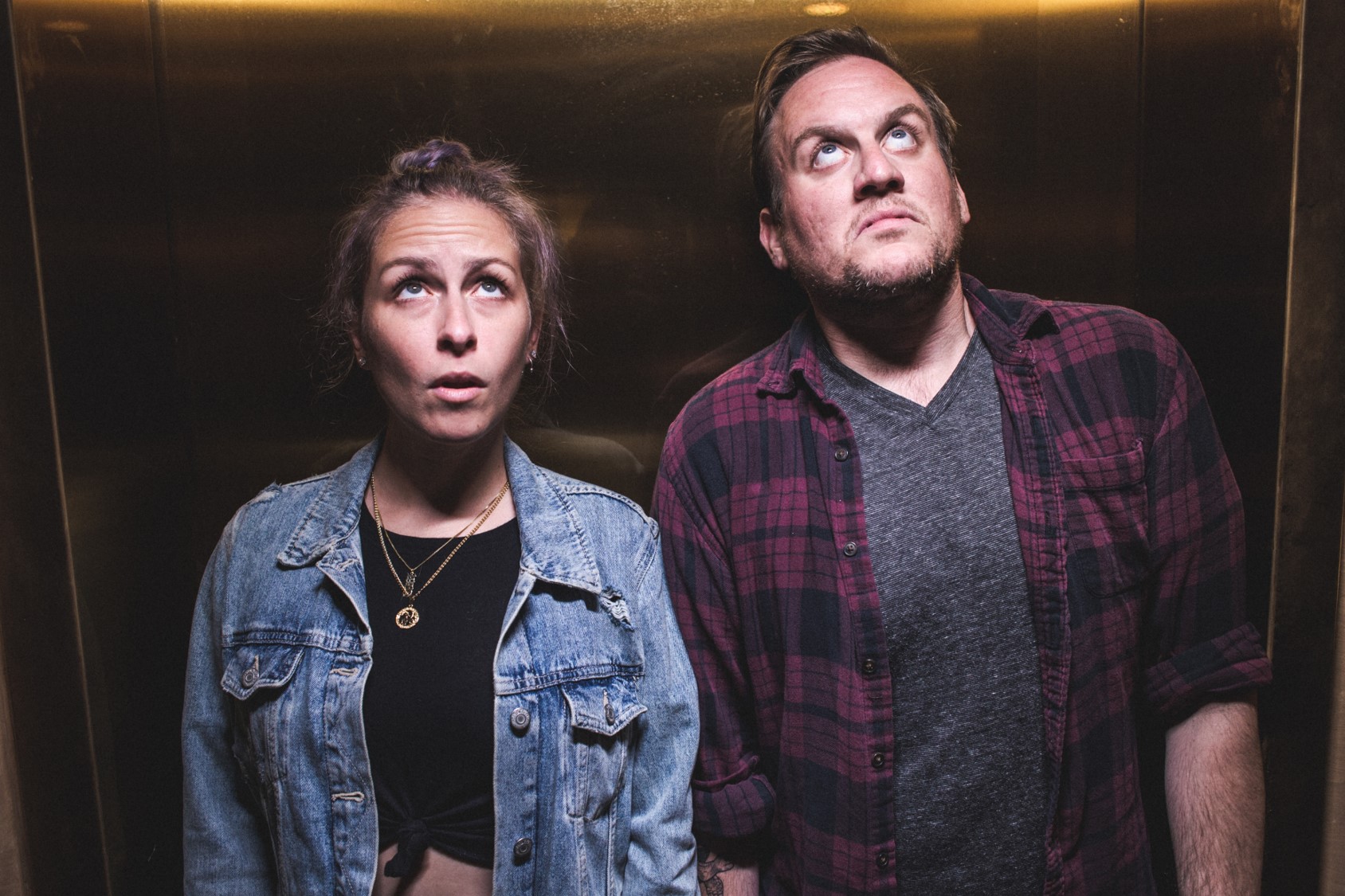 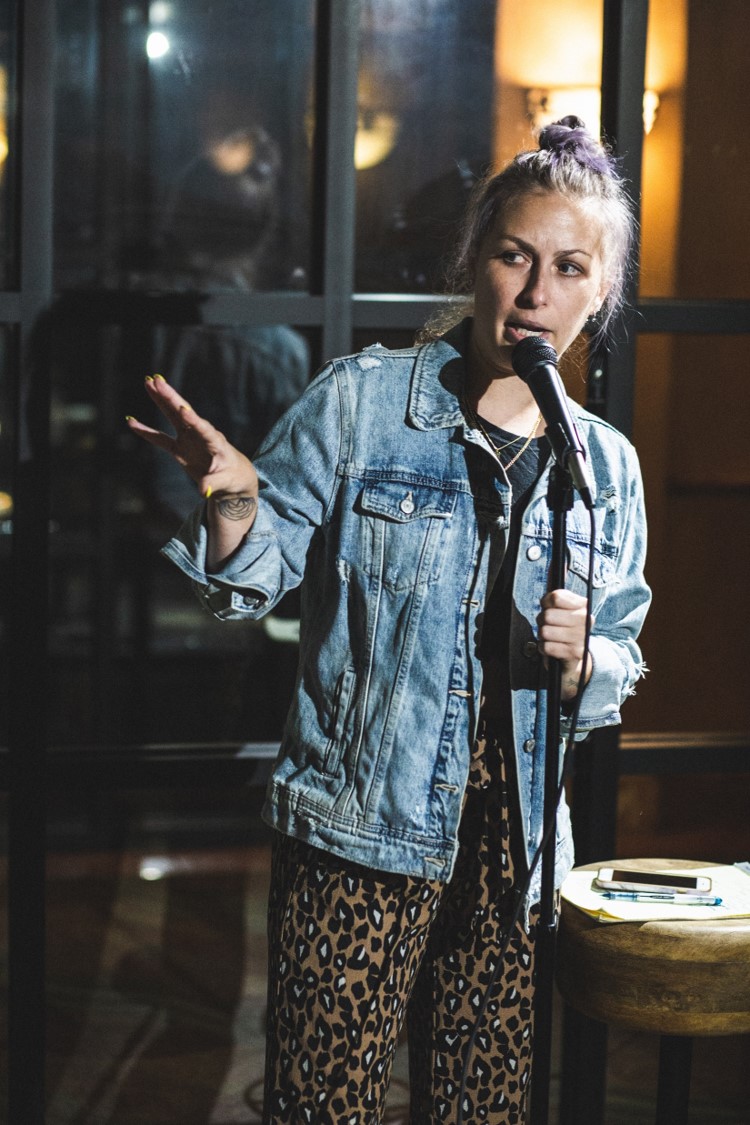 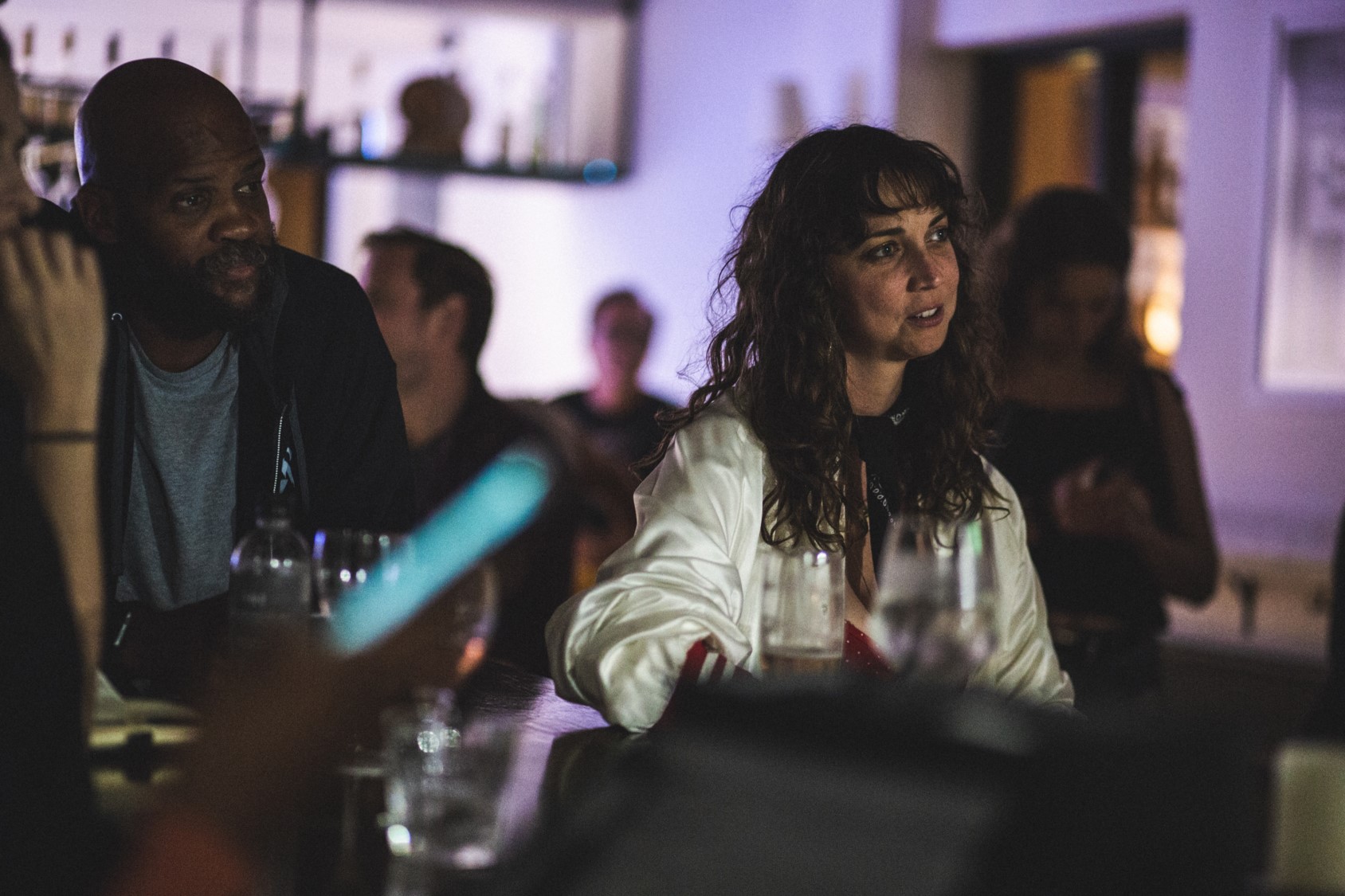 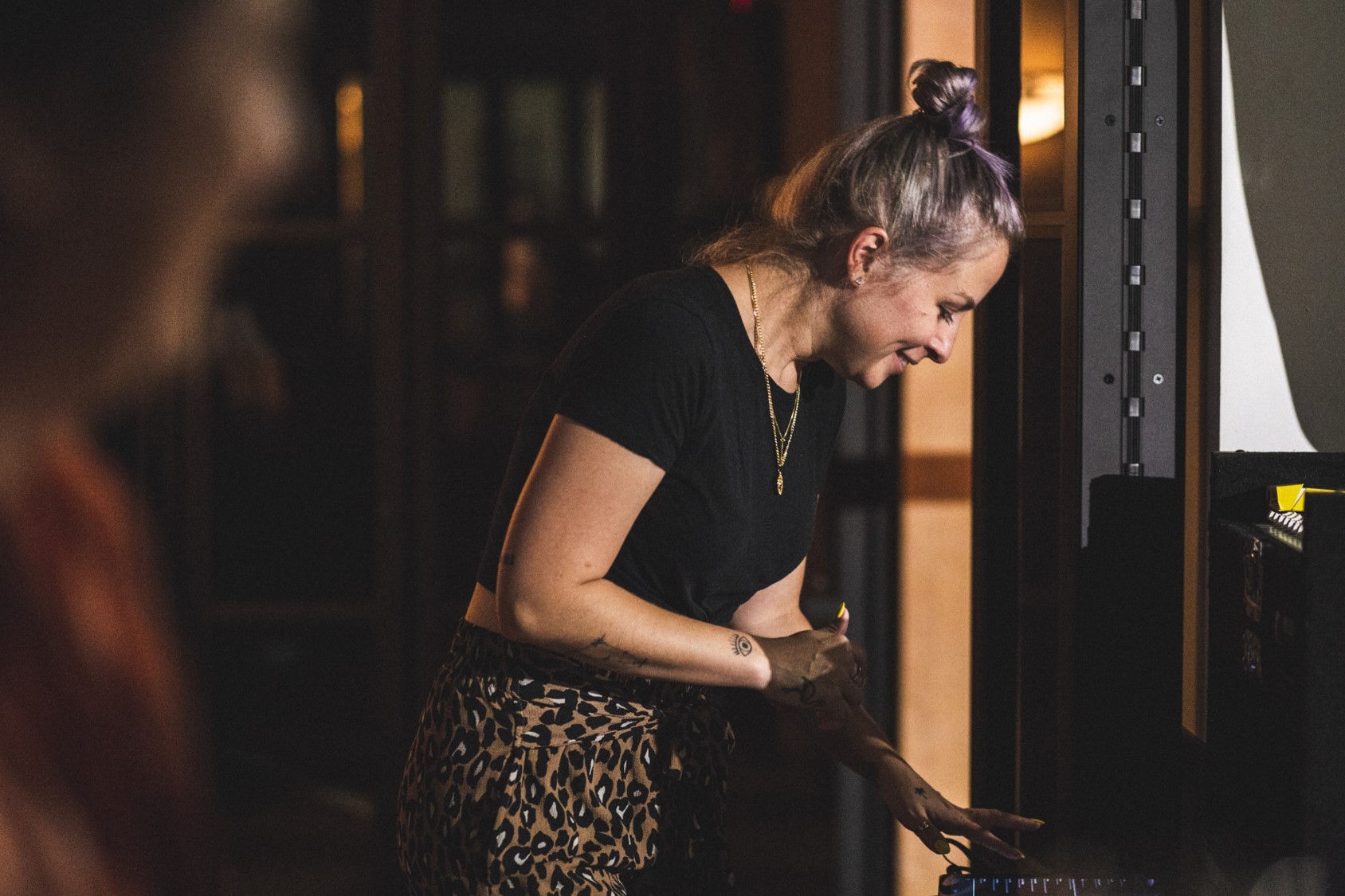 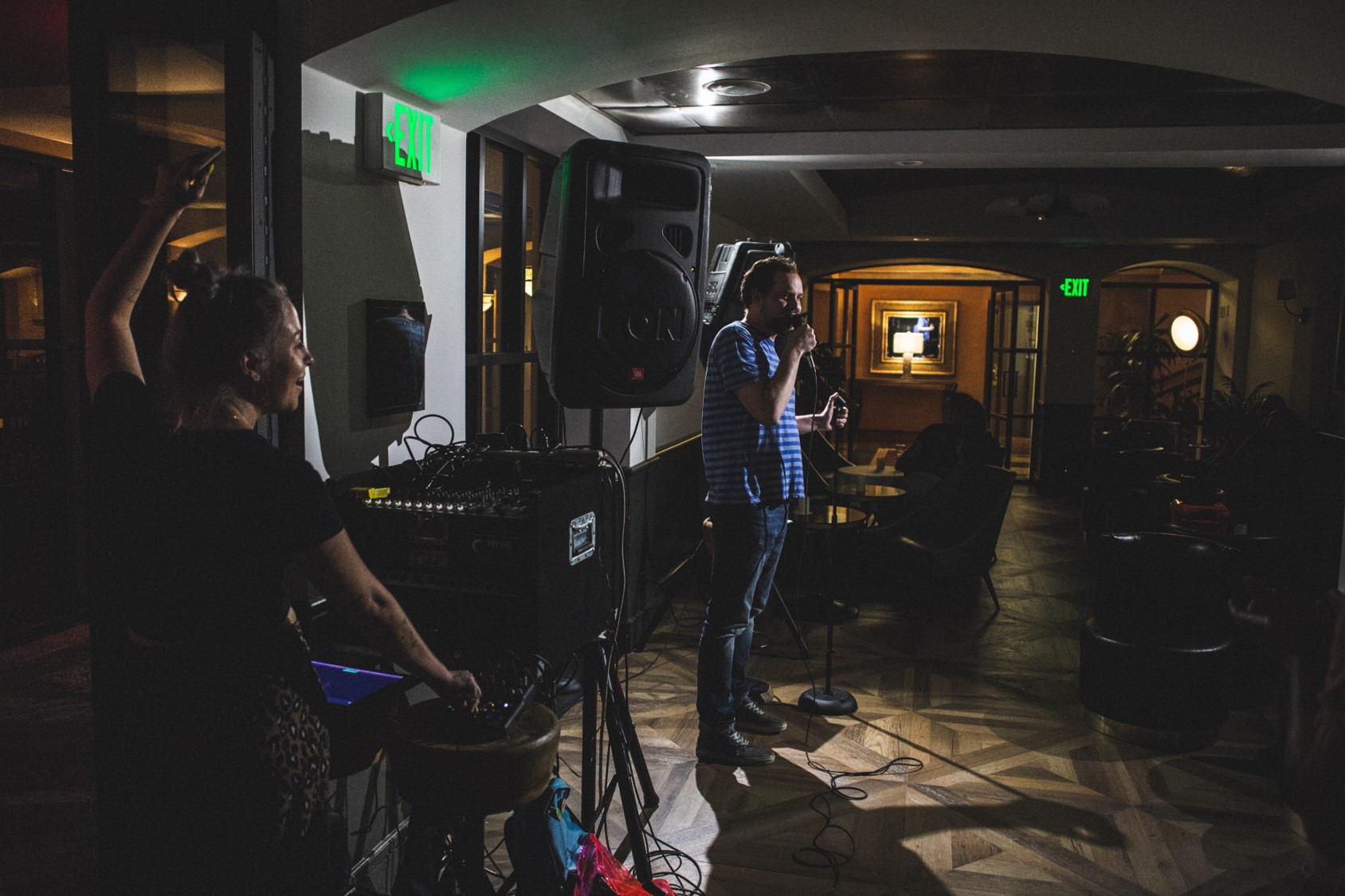 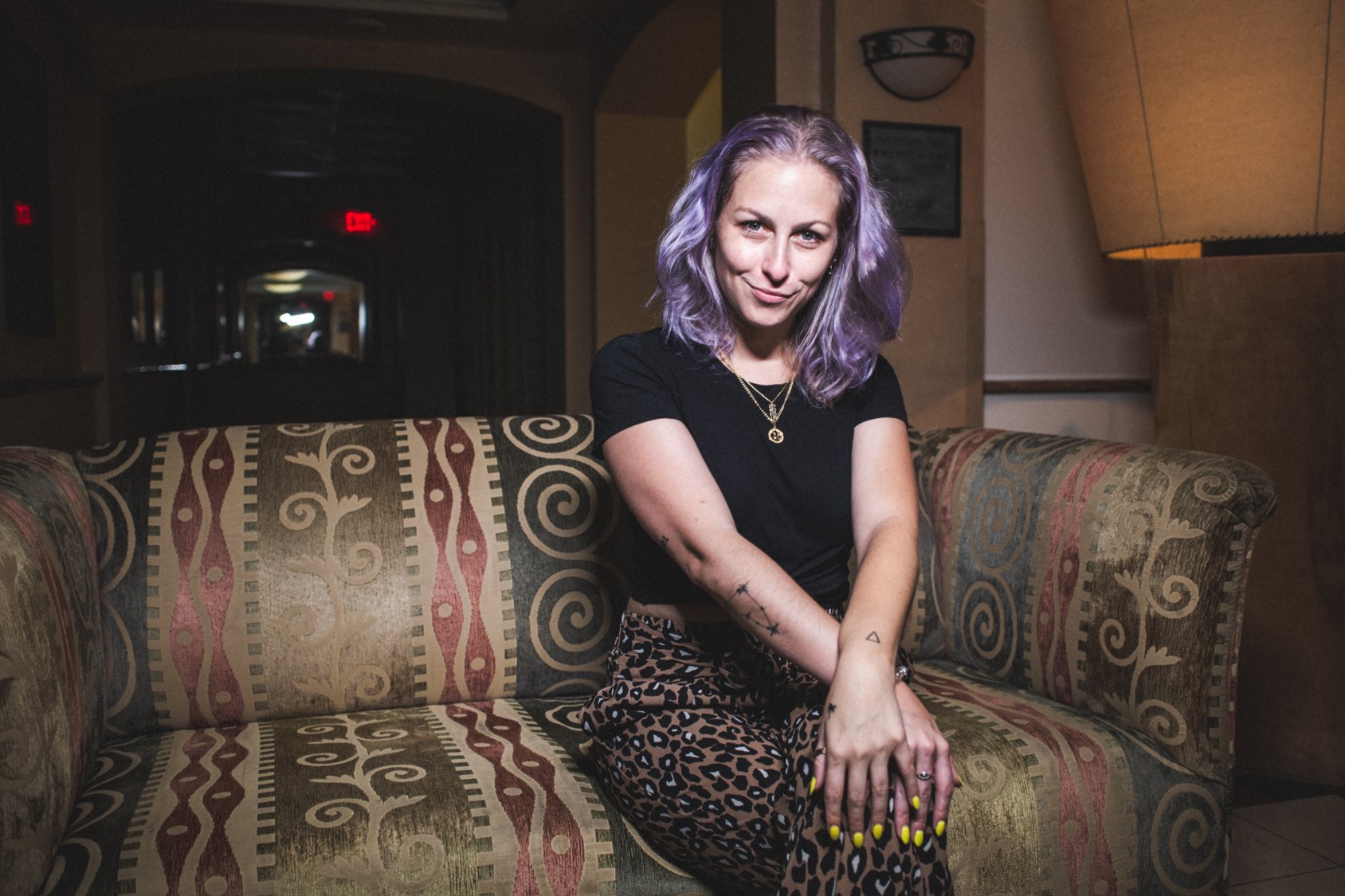 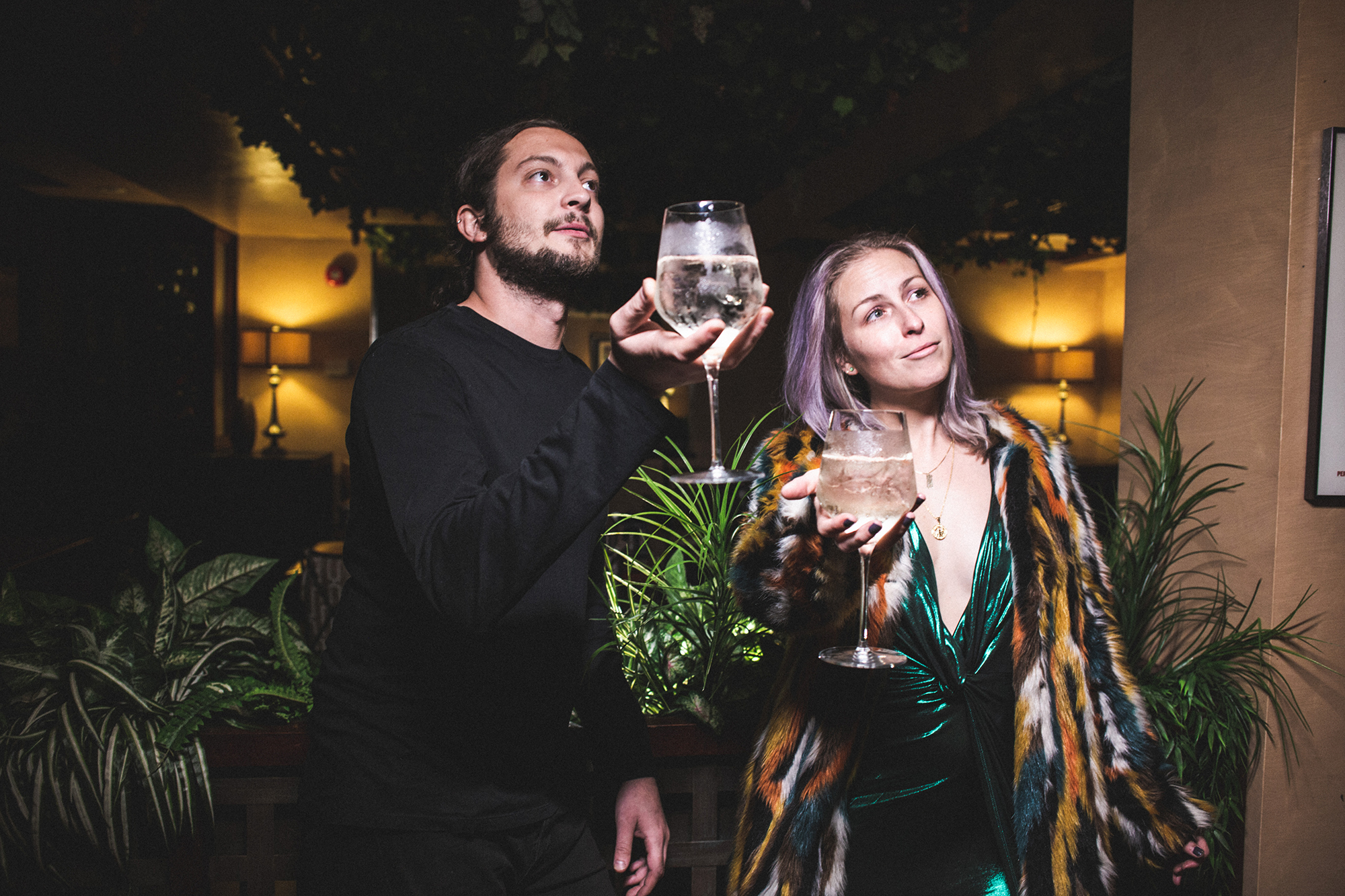 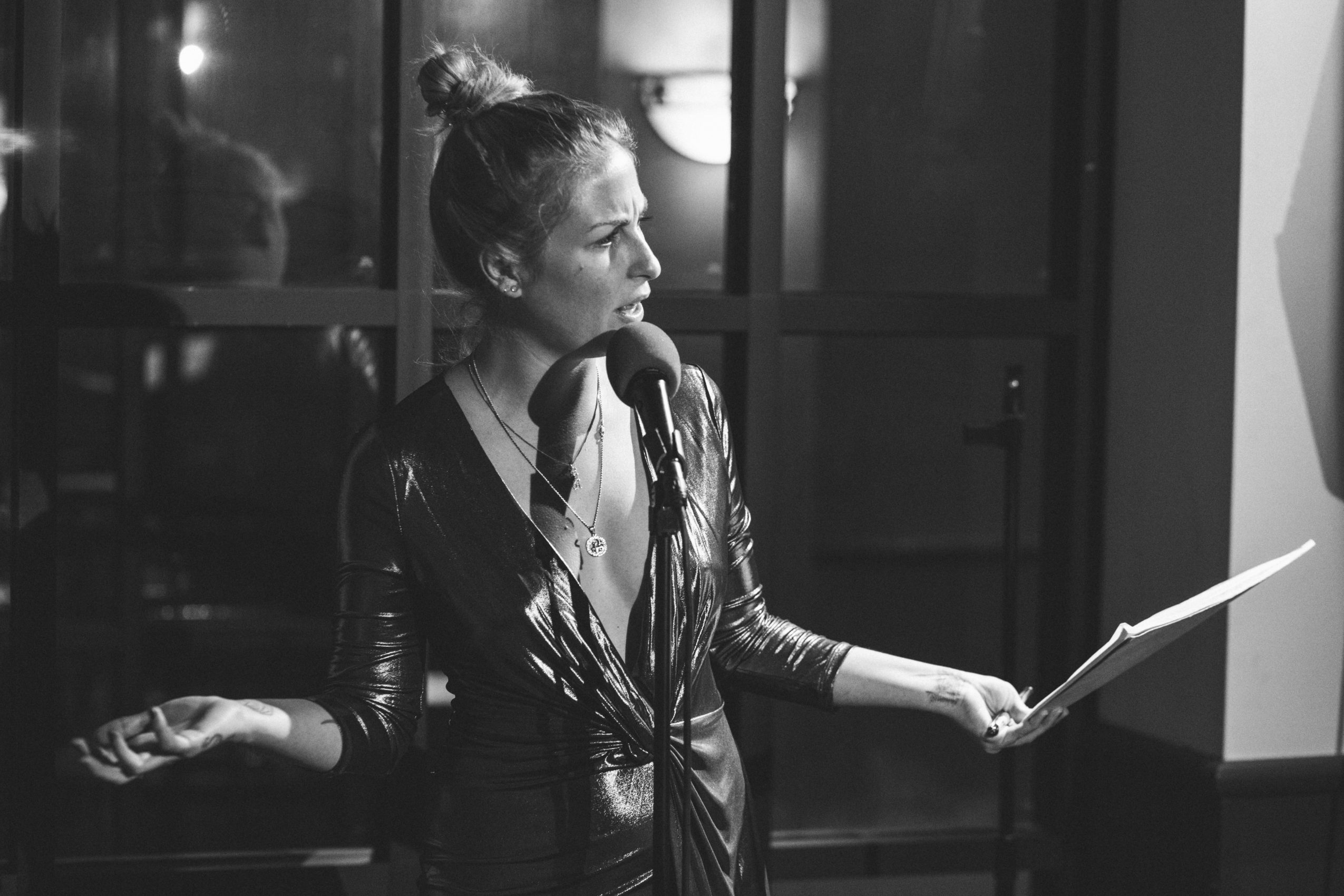 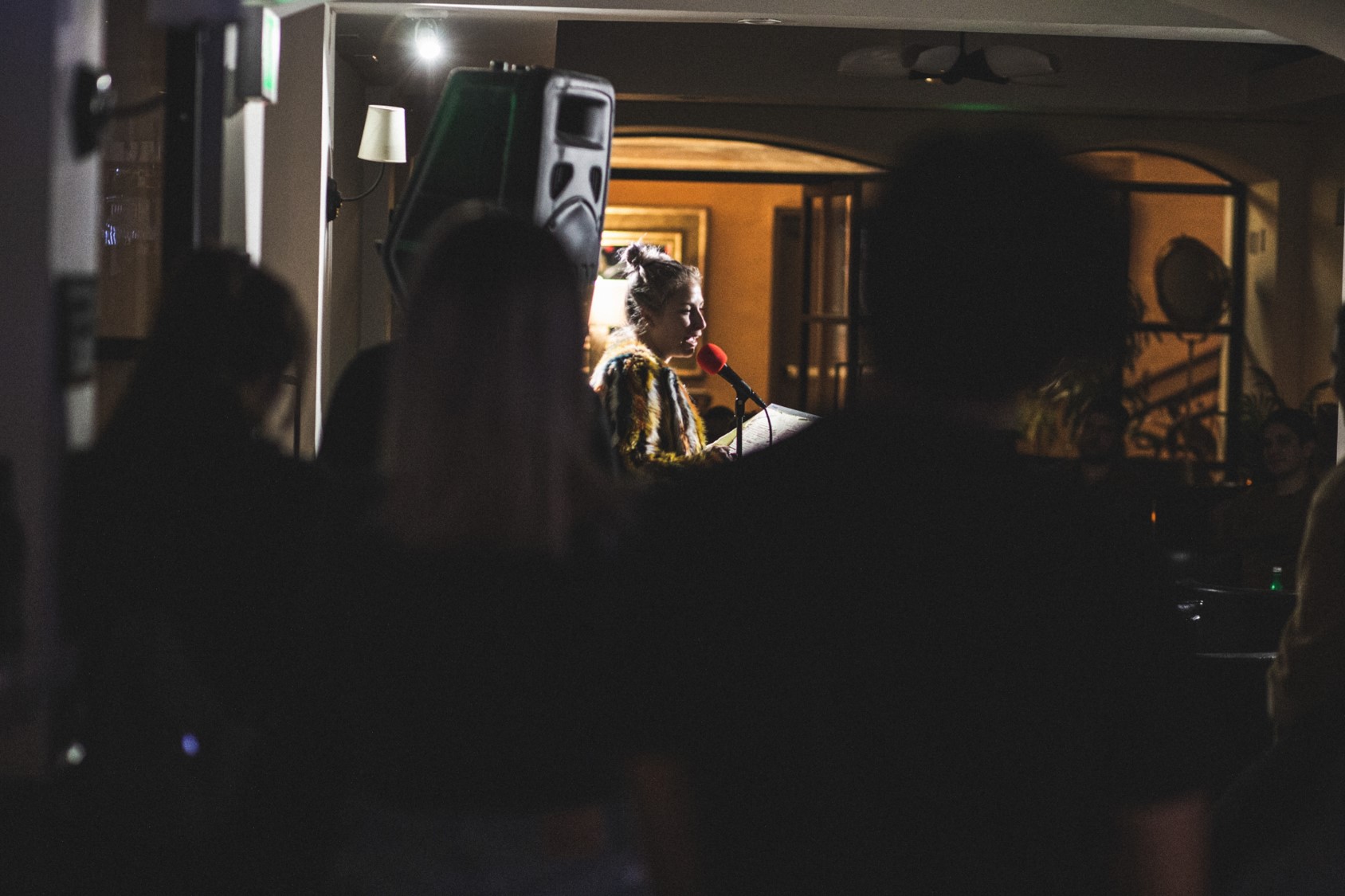 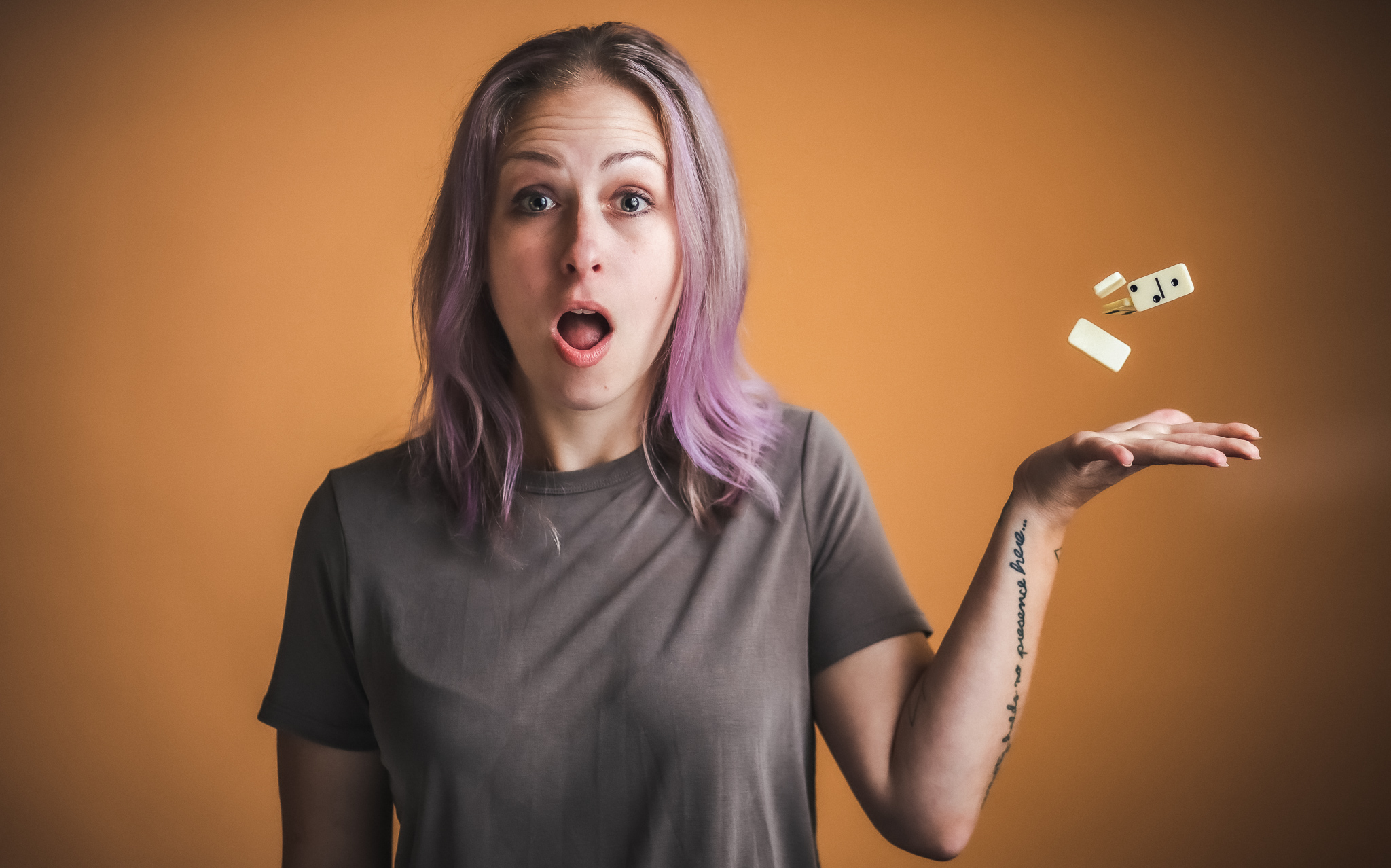