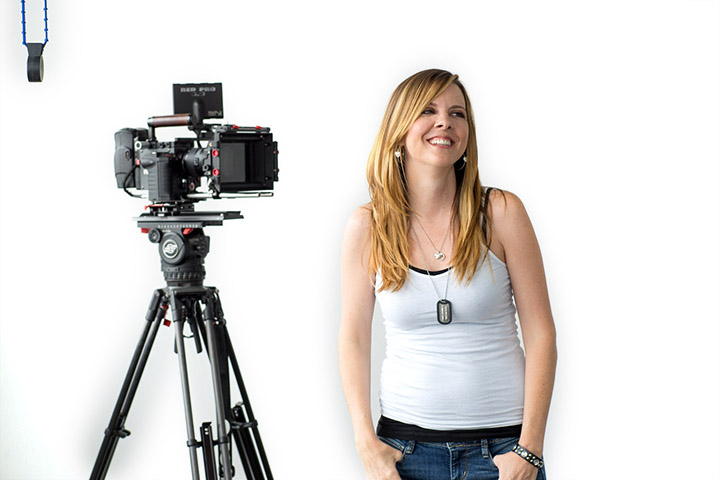 Today we’d like to introduce you to Jenn Page.

So, before we jump into specific questions about the business, why don’t you give us some details about you and your story.
It’s difficult to find the starting point to “how you started,” as it could have begun as a child bossing my cousins, sister, or friends around to make videos on a VHS camera back in the small town of Cahokia, Illinois. Maybe it started when I was going to college surrounded by corn, having my first taste of being part of a theatre family at Southern Illinois University Edwardsville. I was an actor then, and not a very good one; however, I still got cast in my first professional play in St. Louis before I even finished collecting my diploma. Maybe it started when I spent two outstanding years in New York City. There I realized I wasn’t a terrible actress; I was just meant for film and TV, and not stage. However, in NYC no matter what I auditioned for I booked it, stage or screen, it didn’t matter.

I moved to Hollywood in 2001. The land of dreams. The land of everyone else moving here to pursue their career as an actor. The land of “Why can’t I even get an audition?!?!?”

In 2003, I took a class with this fiery red-headed woman who made actors work their careers like a business, and not like…well, actors. Actors spend all of their time asking to be cast (sending headshots, auditioning, etc.), but she made me see that I could have more control over my career. That flipped a switch inside my brain. I decided to start a production company so I could produce work for myself. People weren’t really doing that back then. It was pre-digital revolution so not everyone had a camera and an editing system. My first act, after getting other actor friends to come on board to produce stuff for themselves too, was to create a film festival. We shot five short films over five weekends and then put them up in a small theater for a standing room-only crowd and a pretty decent industry panel. After that, projects slowly started to come in and quickly fell apart, mostly due to too many cooks trying to run the kitchen. I left that company and formed my very own first production company, Luminave Flims. My goal was to make films for women, by women, about women.

After that I had produced a number of things and then in 2007 I decided to pick up my camera (we had now reached the start of the digital revolution) and film a little music video. I fell in love. I fell in love with storytelling. I immediately co-wrote a short film called “Pubert,” cast the funniest kids, and we set out with just me and a sound guy to make the entire short film. Working with the kids, bringing out the best performances, choosing how the story would be told, I fell in love. I knew I had finally found my passion: directing.

From there I made one more piece for me to star in, a romantic comedy web series. I found through that process that I was more in love with creating the moments as a director than living the moments as an actor. Every time a shot worked as envisioned I would jump up and down and yell with joy. I had never felt that as an actor. And with that, I never acted again, and a director was truly born.

At this point I was working for Disney. I earned a weekly paycheck and got to work on some cool projects, so why would I ever leave? Other than I felt I was losing my soul because it wasn’t where I was meant to be. I even started to see a therapist at one point because I was becoming so depressed. Then something magical happened. In 2009 Disney laid off thousands of workers, and I was one of them. At the time, it felt like the worst thing that could ever happen to me. How would I pay rent?! However, the universe wasn’t done pushing me out of the coop yet. Not even two weeks after leaving Disney, I lost control of my motorcycle and I went down. I broke my wrist in so many places that they had to glue me together again (fortunately for me, I had better doctors than Humpty Dumpty). I was at the lowest point of my life. I had no job. I was in the worst pain of my life, hooked up to a morphine drip, and I had no clue what was going to happen after I left the hospital. Then I realized the magic.

I found out that I would get disability for a certain amount of time. Thus, I had some breathing room to figure it all out. In that moment, I decided I would do anything to make money as a filmmaker, determined to never work in an office again. Once I was healed I filmed reel scenes for actors, EPK packages for small indie bands, birthday parties for two-year-olds. It sounds like the worst way to make a living, but I was loving it. I was in control. I was the producer, director, editor. I was creating the stories, creating the look, bringing out performances. It wasn’t long before I got my first break. I got to be the videographer for a Hans Zimmer interview being done by a German TV station. Wait, what?! I get to get paid to do what I love AND film an iconic figure that I admire?!? What is this life?! There is no going back after you get that opportunity.

This past year I formed my latest production company, Heart on Fire Productions. The mission? Create high quality content and do everything in our power to make the client, the talent, and the crew feel like rock stars. I strongly believe that it doesn’t matter the medium we are working in–feature films, music videos, corporate videos or beyond–we are the luckiest people in the world getting to do what we do. Our work and our work ethic should reflect that.

Overall, has it been relatively smooth? If not, what were some of the struggles along the way?
No matter what business you are in, I don’t think it’s possible not to have struggles along the way. Even if you have every resource imaginable, there will still be issues you deal with on the journey. I, however, have yet to have all the resources needed, and that may be the biggest hurdle I’ve yet to overcome.

It’s never stopped me, not having resources. I’ve been lucky to have the most wonderful people surround me. When we have a project, whoever is on board, works themselves to exhaustion to make it happen. In the film industry, everyone is always looking for money. I once heard Ron Howard on the radio saying it’s not easy to fund his films. RON HOWARD! Even today, gearing up for my 100th-something project which will be my sixth feature film, we have still only raised a mere fraction of the money we need to make the film.

There’s countless stories I could tell of the work it took to build a production company; more importantly, building my reputation of being trustworthy to clients. To get hired in this town people must trust you and like you, maybe even more than liking your work (although, your work better be stellar!). I’ve worked with producers and clients who have made the sweetest, calmest people become emotional wrecks. I’ve worked with many producers or clients who hire me and my team to do the work, but along the way you realize they can’t give up control or trust anyone so they end up sabotaging their own project. The personalities in Hollywood are unique to say the least. There are so many factors that can make a project go south: ego, fear, inexperience, etc. It’s been my job on the journey to either remain the level-headed calm one, or put people around me who can be that calm level-headed person. I always want the person who hired me to feel special and appreciated, because they are, but sometimes there’s nothing you can do to make them happy. In those cases, you just do the best work you can and move on.

Please tell us about Heart on Fire Productions.
Heart on Fire Productions is a full-service production company helping clients from script to screen. We are a driven group of professionals who are enthusiastic about helping our clients’ projects reach their full potential. One of the things that sets us apart from many companies is we really focus on the client’s end goal. It’s less about what we think would be cool to make, and more about what does the client want to see happen when the project is completed? Do they want to go to festivals? Do they want the video to go viral? Do they want to sell more product? Do they want to get press? One of the first things we ever do with a client, before talking concept, is talk about their ultimate goal. After that we work with their budget to figure out how to create the most unique, high-quality product that will make a lasting impression.

The bulk of our work is in either films or music… or films with music! From short films to features we’ve helped people realize their dreams, even when they thought it would never be possible for one reason or another. I’m probably most proud that we’ve been able to do that for people. Furthermore, the films we’ve made have won numerous awards and received distribution. We’ve done quite a bit of work for Billboard artists as well. Music video and EPK packages seem to be one of the top reasons we are hired. We were even lucky enough to be hired by camera giant Blackmagic Design recently to create a package for them. That was a fun one because we got to have free reign to shoot the Panic at the Disco concert. We felt like rock stars ourselves!

If you had to go back in time and start over, would you have done anything differently?
It’s taken over 20 years just to get to this point in my career. I’m still growing in the industry. However, if I did go back any number of years, there are plenty of things I would have done differently. I would have done work as an intern when I was still in school. I would have been more patient with people who maybe didn’t deserve it but still should have gotten it. I definitely would have built up the courage to tell Ron Howard how much I admire him that one time when no one else was around and I was too scared to speak. Honestly, though, I don’t know what I would have changed. Maybe I wouldn’t have found my passion as a producer/director if I did anything differently when I was first starting. Maybe I’d already be making studio movies by now if I did something different, but maybe I would have screwed that up before I learned lessons I needed to learn. Everything happens for a reason, even the sucky bits; they make the happy bits that much sweeter.