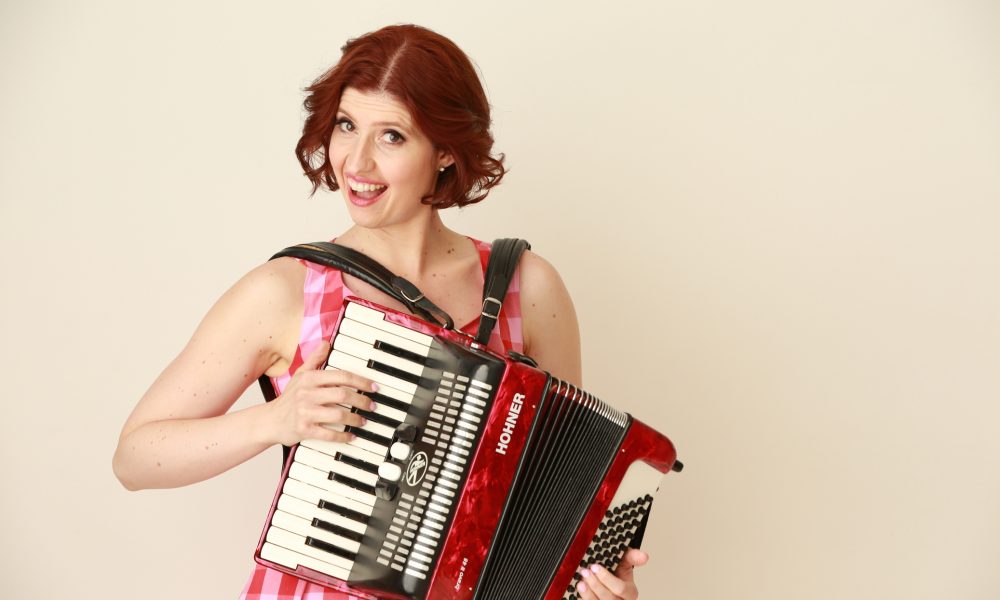 Today we’d like to introduce you to Jen Eden.

Jen, let’s start with your story. We’d love to hear how you got started and how the journey has been so far.
I’m an actor, improviser, writer and musician. I grew up in Albuquerque, NM, and studied theatre at Eastern New Mexico University. Upon completing my degree in Acting, I moved to New York City, where I continued studying theatre, voice, and dance. I performed musical theatre off-Broadway, regionally and on tour, and also learned to play an additional 13 instruments to add to my existing three. I trained at Broadway Dance Center, Jen Waldman Studio, and most recently, the Upright Citizen’s Brigade. In July of 2017, I moved to Los Angeles to begin pursuing a career in film and television. I immediately began studying with Lesly Kahn and continued my study at the Upright Citizen’s Brigade. I completed the core program at UCB and was accepted into the Advanced Study program. I’m in involved in several groups, but primarily I perform musical improv, which is a lovely combination of all my skills. I’m also currently part of a national ad campaign for The Container Store.

We’re always bombarded by how great it is to pursue your passion, etc. – but we’ve spoken with enough people to know that it’s not always easy. Overall, would you say things have been easy for you?
It has definitely been a long road. Sometimes, I wonder why I didn’t move immediately to Los Angeles from New Mexico. Truthfully, my time in New York was invaluable. I started out as an acting major and picked up singing in college. I had never sung in a choir before or done a musical, but I was so in love with the form, and singing came naturally to me. I had grown up playing piano, oboe, and flute, so music was already very much a part of my life. I had such a wonderful time studying voice, and when I took my first trip to NYC in college I was so overtaken by the beauty and the energy of the city I knew I had to live there. I truly had no idea what I was in for. I trained so hard. I loved singing and acting so much, but dancing was always difficult. I had not grown up dancing at all. I became a work-study at Broadway Dance Center. I took sometimes 10 classes a week. I was working at BB King’s restaurant till 4 am most nights, and getting up early for auditions.

Since I was not in Actor’s Equity, there were no appointments, so I would get to auditions, sometimes as early as 5:30 am. Sometimes, I didn’t even go home after work. Working and living in NYC was an incredible grind. I rarely slept and was constantly on the go. Any time I wasn’t in acting class, dance class or at a voice lesson, I was at an audition or working. I didn’t have free time, but I loved every moment. It started to dawn on me that because I had gone to school for acting at a small school that didn’t have a showcase I was at a huge disadvantage. People didn’t know my school, and they were unwilling to give me a chance. I was having great small successes. I booked the very first audition I walked into. It took them two weeks to cast me, and I said to myself “Finally!” I had no idea that most professional actors are doing well if they book one show per year. I did consistently book work, but every time I did I had to dig into my savings or go into debt to take the acting jobs.

At one point in my career, I was living in a 5th-floor walk-up in Inwood (for the non-New Yorkers, that’s all the way at 211th street in Manhattan, even above Harlem!) and my apartment building was right above the A train. Every night, when I came home, I would walk up four flights from the train to the street and then five flights to my apartment. I was also working in a restaurant that had stairs, working out five days a week, dancing constantly, and during that time I tore my a ligament in my left knee. It was extremely painful. I had to quit training completely and I was devastated. I couldn’t work, dance or workout. I was told that I might never dance again. It was a really hard blow. I did recover but was never able to dance at the level I had been. I was booking more work as an actor-musician, and I made my Off-Broadway debut in 2013 and finally joined Actor’s Equity. I was so happy and so proud. Still, I was only being paid $375 a week to perform seven shows. Everyone was extremely talented, we had Tony winners in the cast, and we were all making the same money. Theatre is something that I love, and it’s a form that everyone does for love, for sure.

In 2015, I started working with Chicago City Limits in New York City doing fully improvised musicals and short form improv. It felt like coming home. I had done tons of improv in high school and college and I missed it so much. I was so busy training to be on Broadway I forgot about something I was good at that I loved so much. So, I started performing in shows, and then in 2016, I started taking classes at UCB and I was absolutely hooked. What an incredible community. I also started writing a pilot around this time and shooting some original videos. I realized that I had maybe been trying to fit a round peg into a square hole. While I know I am an extremely gifted vocalist and actor, there really never was a place for me on Broadway. As much as I wanted to believe it, I was not a chorus girl since I was never a great dancer (despite training), and while I am a hilarious and quirky lead, there aren’t a ton of shows that call for that type of a leading lady. The ones who did need that sort of a lead would go with a well-established name.

Around this time, I took a trip to Los Angeles and realized I was meant to be here. I didn’t have to give up music, but it was time to take my career to the next level. I know that Broadway will always be there. Going to open calls without an agent and hoping to break in as a “nobody” was a fruitless grind. Writing and filming characters, studying comedy, and performing musical improv was giving me so much joy, it seemed like the absolute right move to make coming to Los Angeles. So far, it’s actually been SO EASY. I love it so much, and I’m happy to say that I signed with an agent and a manager within the first six months. After signing with my commercial agent, I’ve already booked three commercials! Next step is getting a theatrical agent and joining SAG.

So, as you know, we’re impressed with Jen Eden – tell our readers more, for example, what you’re most proud of as a company and what sets you apart from others.
I am an actor, improviser, writer and musician. I am my own business. I specialize in musical comedy. For now, you may have seen me around Los Angeles performing with one of my amazing improv teams: The Music Store (fully improvised musicals where we also play our own accompaniment) or Pitch, Please! (fully improvised acapella musicals) or perhaps as my Russian Character, Yelena, whom only plays pop songs on the accordion. I am also currently starring in a National Ad campaign for The Container Store. I think that being a classically trained actor, a serious improv performer, a professional singer, a composer and a writer who also plays 16 instruments is pretty special, and that sets me apart from others.

So, what’s next? Any big plans?
I’ve only just tapped into the possibilities here in Los Angeles. I’m currently working on a few fun projects for my reel, and I can’t wait to put them out there! Looking forward to taking meetings, so I can sign with my perfect theatrical agent, so we can start breaking down all the doors and I can book tons of work in TV and Film. 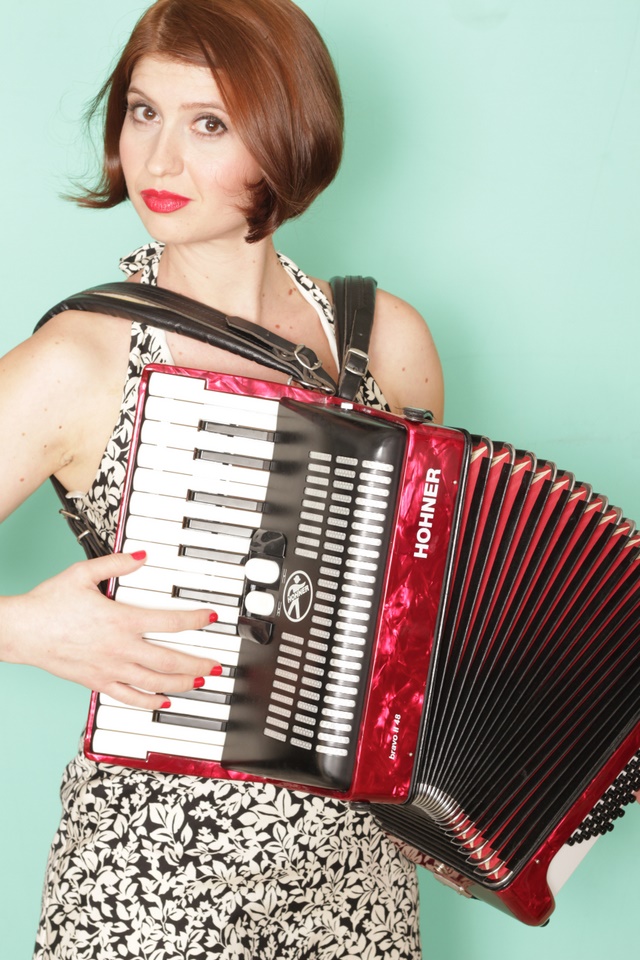 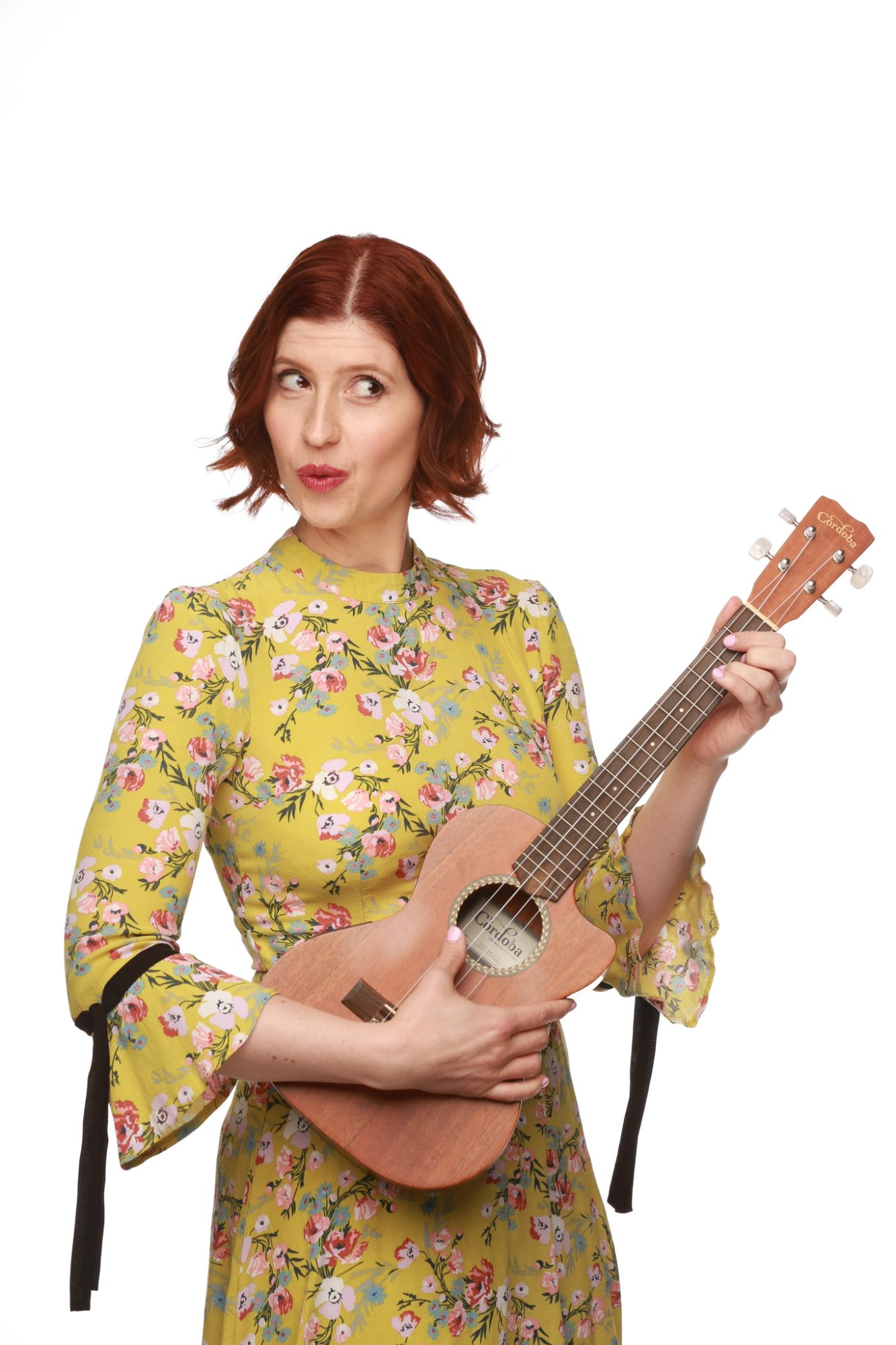 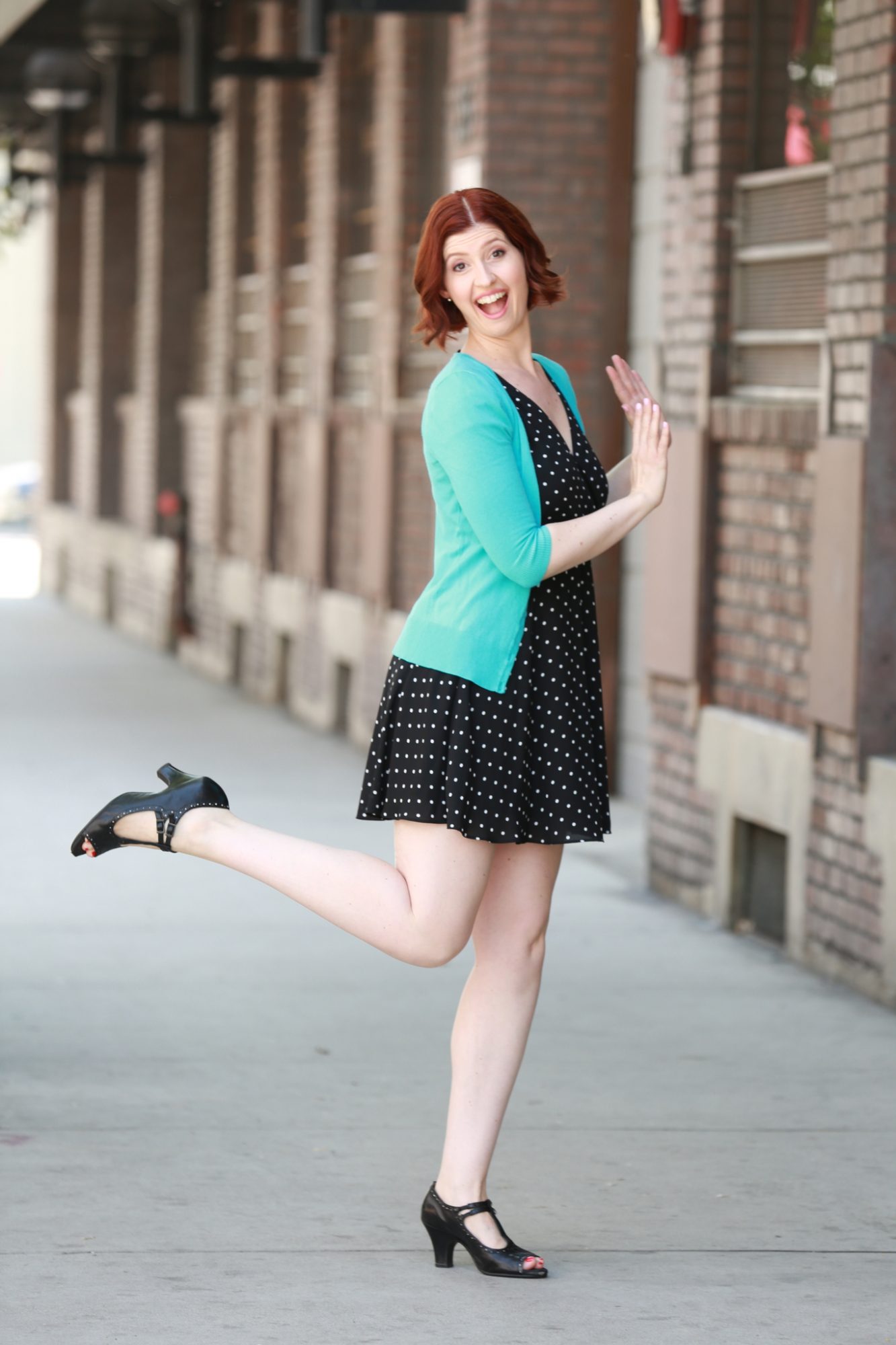 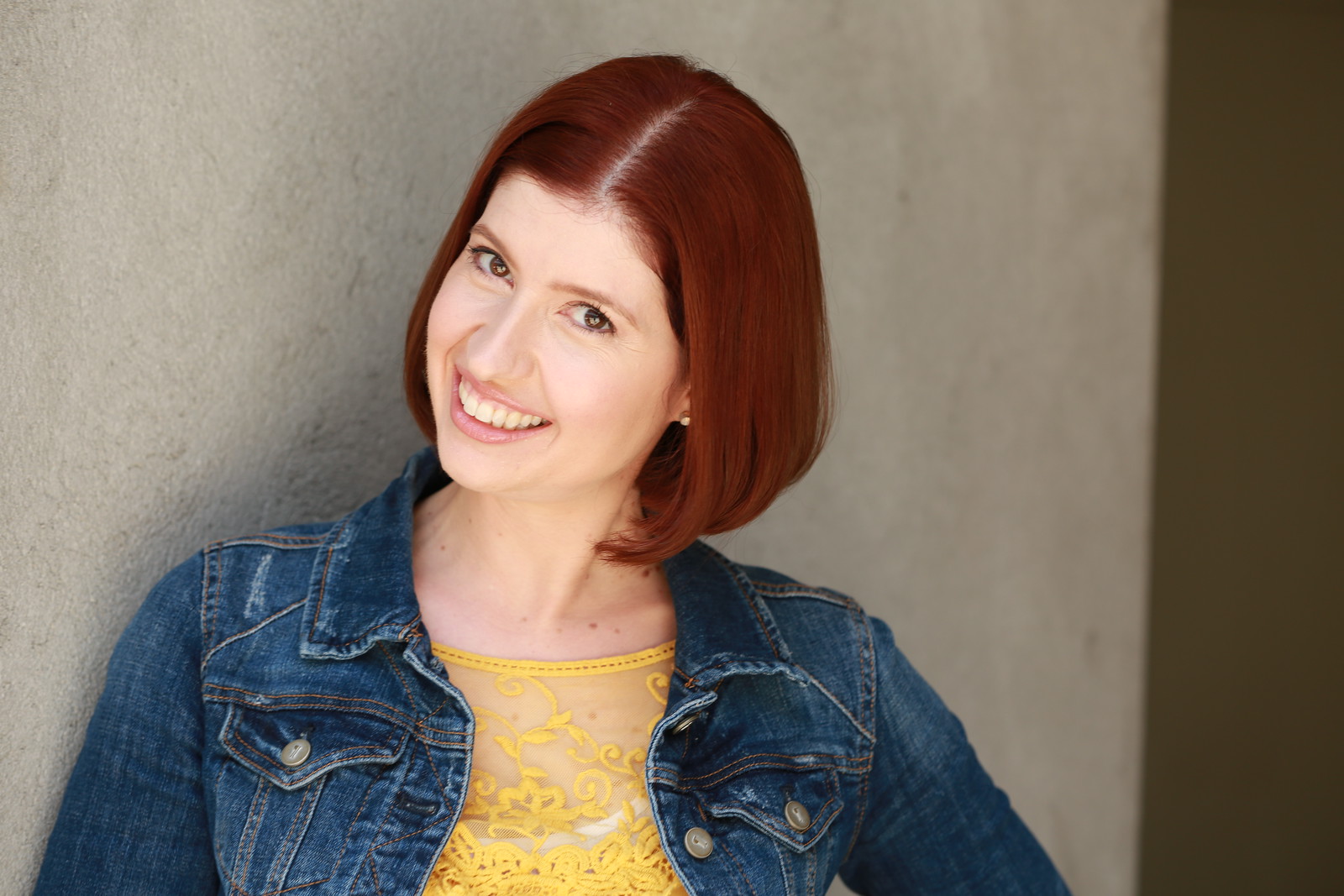 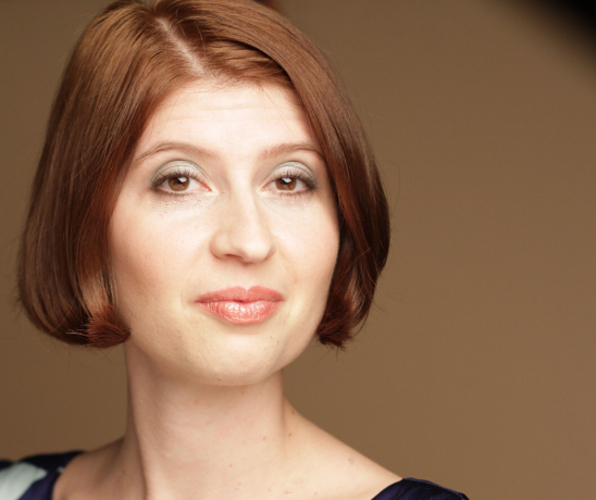 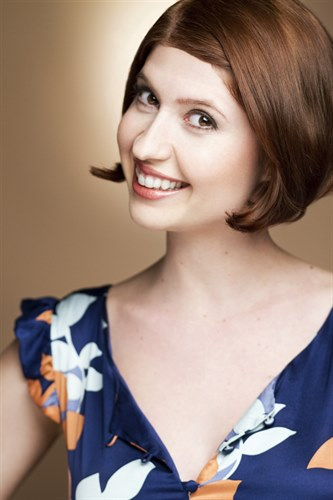