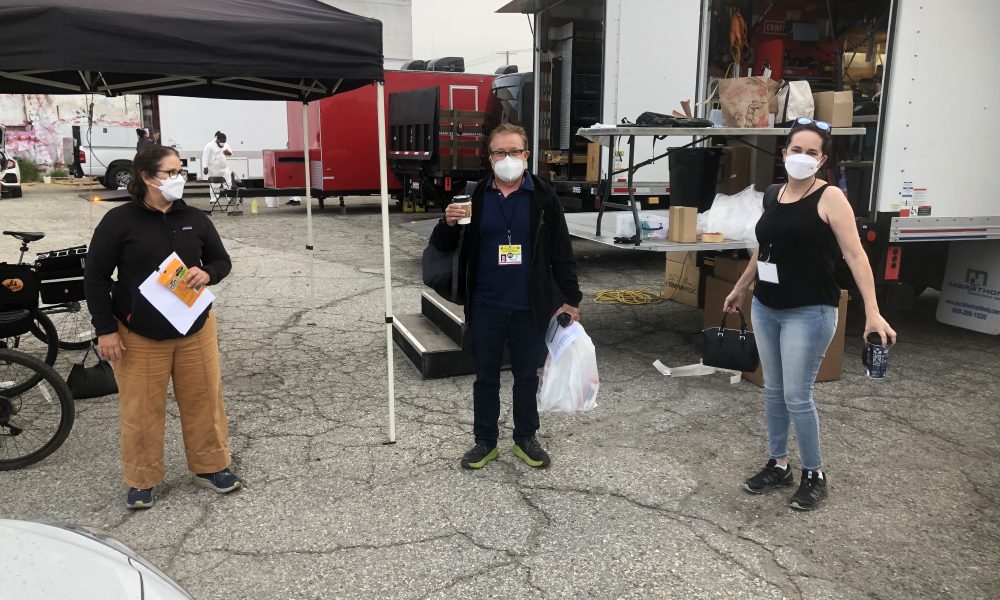 Today we’d like to introduce you to Jeanette Volturno.

So, before we jump into specific questions, why don’t you give us some details about you and your story.
I attended High School in Culver City. Back then, the Studio there was MGM. We used to get a group of us together to walk over to the lot, pick out a hand-painted backdrop, and carry it all the way back to the school to hang and decorate for the school dances. Even back then, I was Producing. When I was at UCLA, I went to lunch on the MGM turned to SONY lot. I was working as an assistant accountant and putting myself through school. Being young and ambitious, I asked a lot of questions at that lunch. It wasn’t meant to be an interview, we were just visiting one of my friend’s colleagues. After the lunch, I got a call from her offering me a job and training to be a visual effects coordinator for the Visual Effects division called Sony Imageworks. Jumping on the offer, I took the job. Two years later, I was headhunted to move to London and help open a Visual Effects company for Tony and Ridley Scott, called Mill Film. While working in Europe, I helped produce a short film which ended up going to the Venice Film Festival. That gave me the calling card I needed to move back to LA, raise some money, and open a production company. From there, it was all about learning how to develop, how to sell, self distribute (before the internet), and physically produce.

One day we got a call to do some additional photography on a little film called PARANORMAL ACTIVITY. We took a handful of friends and spent the next few weeks filming little pieces for Dreamworks (who owned the film at the time). That’s where I met Jason Blum. He came down for one of the shoots we were doing. I like to refer to it as the “chocolate and peanut butter” moment. He asked me why I wasn’t working for the Studios and I told him that I loved the European way of filmmaking where it’s all about the director’s vision. He said, yeah, I get that but it’s too difficult to get distribution without a studio. I said, wouldn’t it be great to produce low budget films that give directors control and are distributed through a studio. 13 years later, seven franchises, and over 65 films, that was a hell of a run. I’ve now set up CatchLight with four amazing partners; Rick A. Osako, Marcei Brown, Jessica Malanaphy and Jason Clark. All of them are powerhouse producers! We’re developing and producing projects that are in the PG to PG13 multigenerational viewing space and we’re partnering to produce with other companies. Marcei and I also have a business that we started a few years ago called Crewvie! Which is a global, inclusion, database. The Entertainment Industry Foundation has just engaged us to be the official database to several of the large Hollywood Studios. And let’s not forget the podcast we have called the Catch A Break Podcast! I was taking so many coffee’s with kids and answering their questions that I figured it was easier for me to do this podcast, otherwise I would find myself over-caffeinated and way behind in my work!

Has it been a smooth road?
Nothing is ever a straight road. Life will continue to give you challenges and sometimes the same challenges over and over until we learn what we’re supposed to learn. With every challenge, I always tried to take those lessons and apply it to other situations. For example, it’s not easy being in a business that is mainly freelance. There were a few times where I had to take a loan from my parents just to eat. I wish that, as a teen, I knew more about money and the energy of it. I’ve since learned to think about it differently and to have a healthy relationship with it; how to manage money and save for a rainy day. I’m trying to instill these lessons in my kids and the next generation that we’re mentoring at CatchLight. Once you have that secure foundation, you’re better able to recognize opportunities when they present themselves. It’s that knowing, that 6th sense of which direction to go in.

Please tell us about CatchLight Films.
CatchLight is all about creating content that entertains audiences of all ages. We’re a group of five friends who came together to form this production company to support storytellers on every level. We believe in fostering talent, growing relationships and taking care of the people we work with. And because we take care of our people, we have an amazing network of artists, vendors, executives and other contacts who allow us to produce quality content for a price.

We are really nimble as a company. We look at each project and adapt the production plan to fit its specific needs. And we excel at delivering these projects within contained amounts of time and resources which allows us to get projects made even in these challenging times.

Our slate is comprised of diverse and relatable stories told by artists we believe in. We are focused on All Audience entertainment because families are voracious viewers and we see an opportunity in producing budget-conscious content for them.

We’re also building an arm to our company called NUMBER 1 RULE. Number1Rule is all about hiring, managing, and promoting under-represented behind-the-camera craftspeople, paving the way for more equitable representation in the entertainment industry. It’s all about creating community, embracing diversity and overcoming barriers through education, mentorship and successive employment. It’s a great complement to the content side of the company as we strive to include a broader cross-section of voices both behind and in front of the camera. We want to train underrepresented (minority, women, disabled, veteran, systems impacted) craftspeople and then hire them on our productions.

And continuing on the theme of supporting diversity on film sets, Crewvie is a unique, global database that allows people to list themselves how they want to be known. You can put all sorts of info in there if you want. All your social media, your reel, if you speak another language, do you have a passport, own any equipment for rent, what’s your gender, race, are you a veteran, LGBTQ, what you’re aspiring to be so people can search under that if they want to take on a person to mentor, and on and on and on! So many things to search by! We wanted to create this platform so that film professionals at every level can find each other and figure out ways to collaborate.

Between CatchLight, Crewvie, The Catch A Break Podcast and Number 1 Rule, we know we can create great projects, open doors to find new people, teach, and give back to the next generation. Plus we’re having a ball doing it together as friends!

How do you think the industry will change over the next decade?
Before COVID (BC), I used to say that eventually we’re going to stop saying TV, Film, episodic, etc… the idea being that people would start to say things like long-form, short-form, series, one off. To me, they are all different mediums to create within. Like an artist choosing to paint with watercolors vs oils. It depends on what we want something to look like. Little did I know that it would change so quickly! We happen to be the first Film crew to shoot a feature film in partial lockdown, all on location, in Los Angeles. What we’ve learned from this is that for the next several months, it will take smaller, nimble teams to get this industry back up and running. Some of the larger, more complicated shows (Film or TV) will have a harder time due to the amount of people and logistics. The strain and stress of this pandemic is everywhere. It’s beyond challenging to wear a mask all day and do physical work. It hurts your face and ears, it fogs up your glasses… Sets used to be a place for close teamwork.

Now we’re all separated into our pods with our departments, we have to move slower to think differently about touching something, moving something, it really does a number on your head. Our industry is resilient and we are all working hard to share information with each other and figure it out. We know people want to be entertained and are consuming media at rates that we are finding difficult to keep up with producing for. I’m inspired by all the new technology and innovation that the creatives in our industry are developing. Like they say, “the show must go on”! 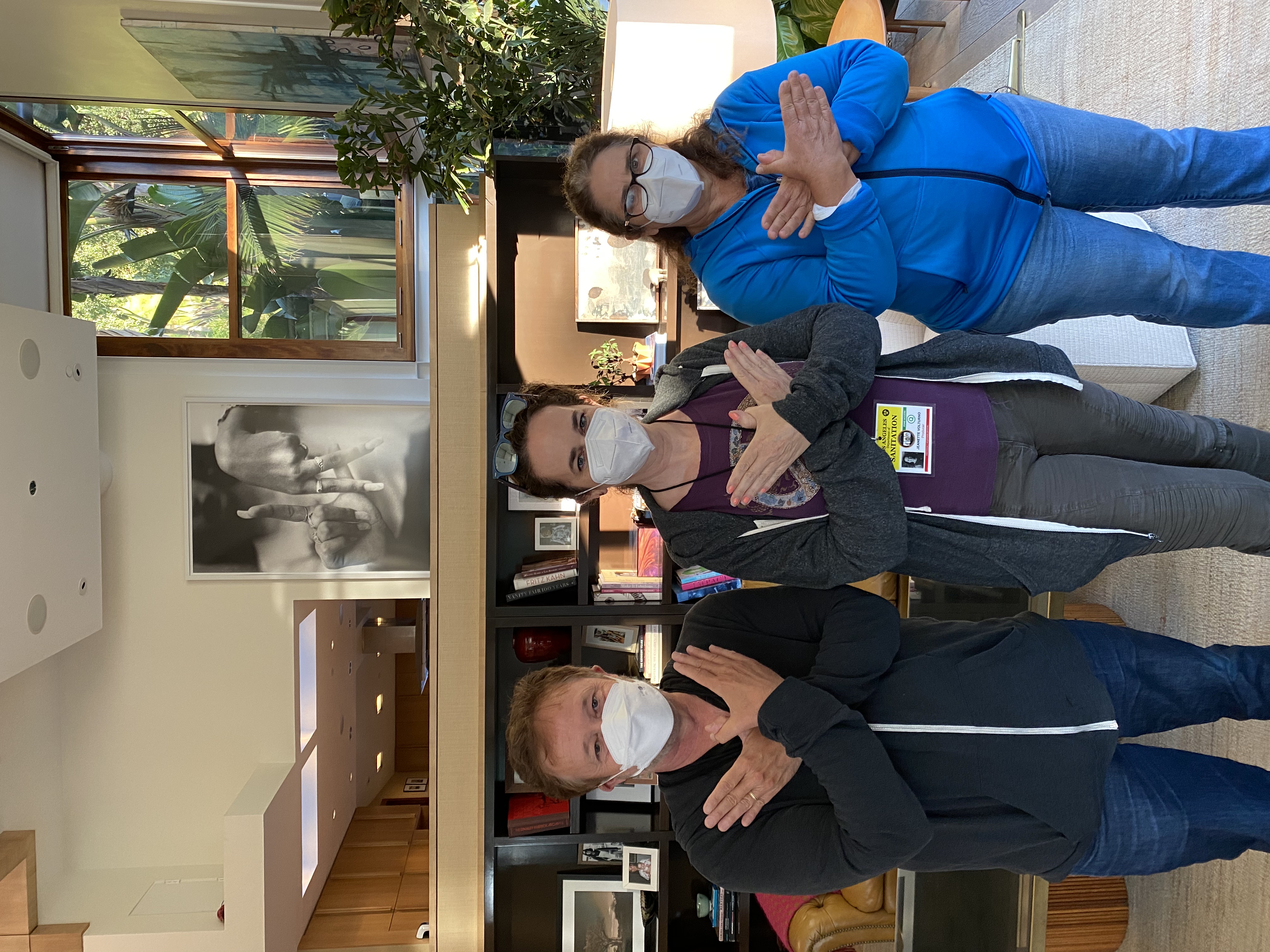 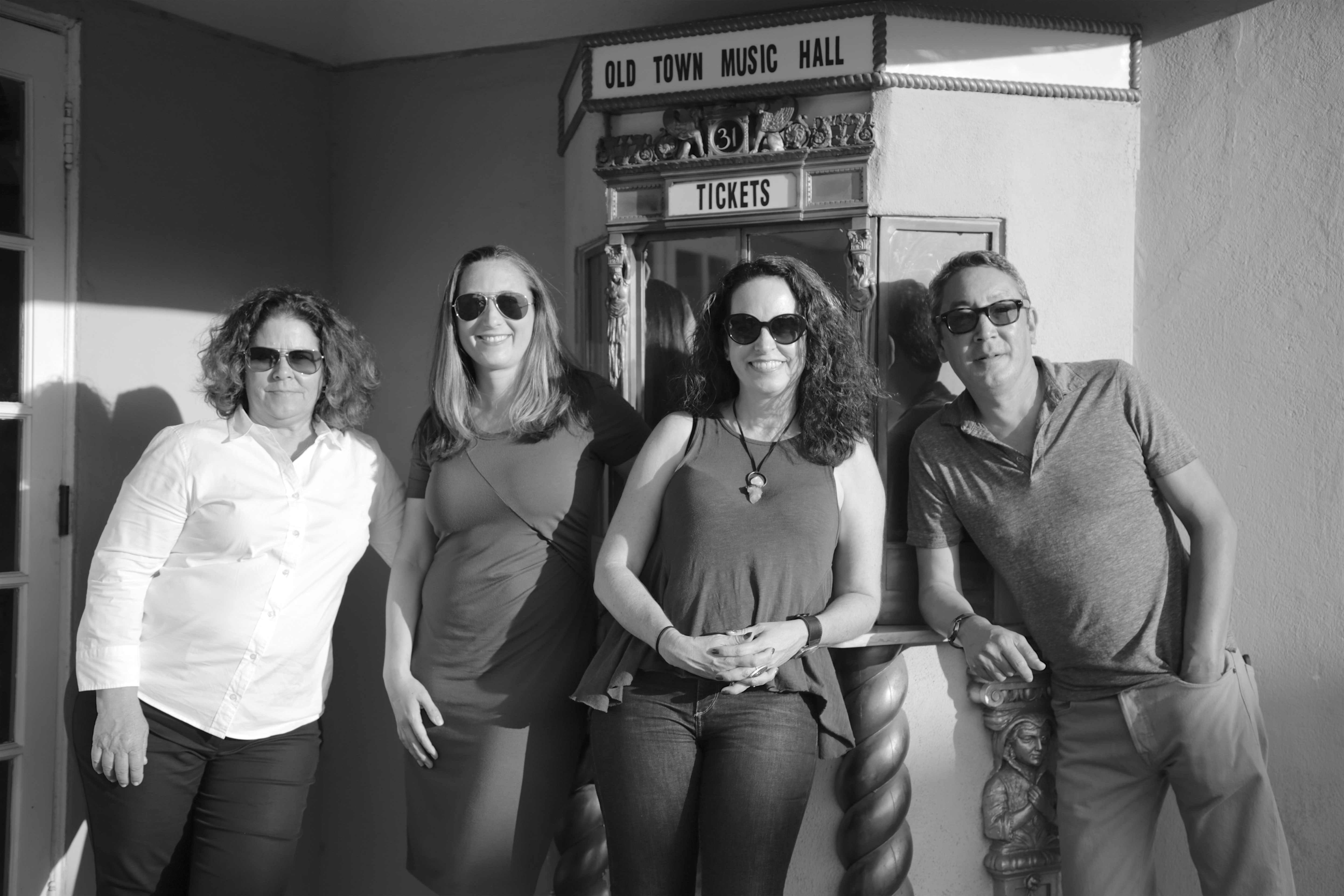 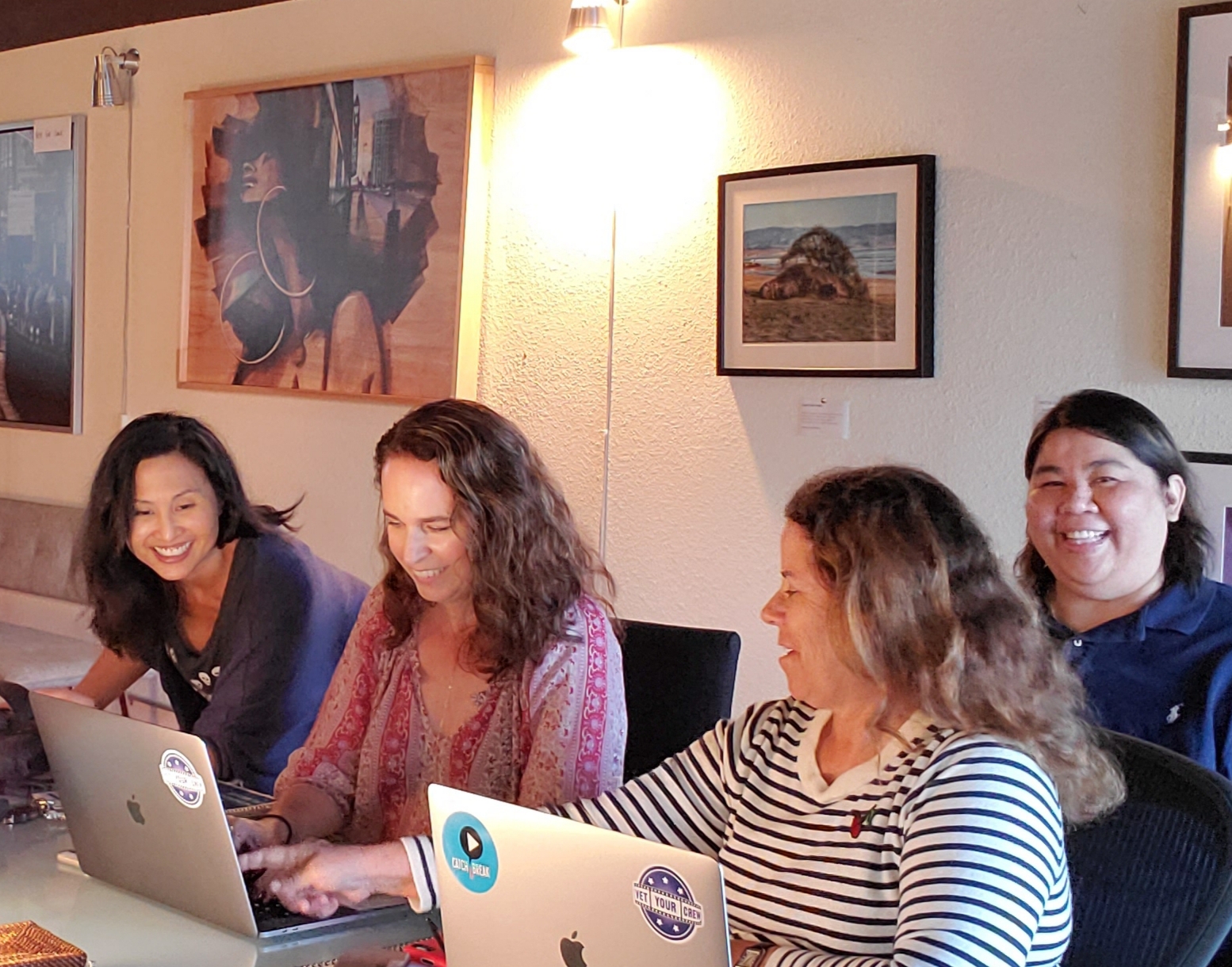 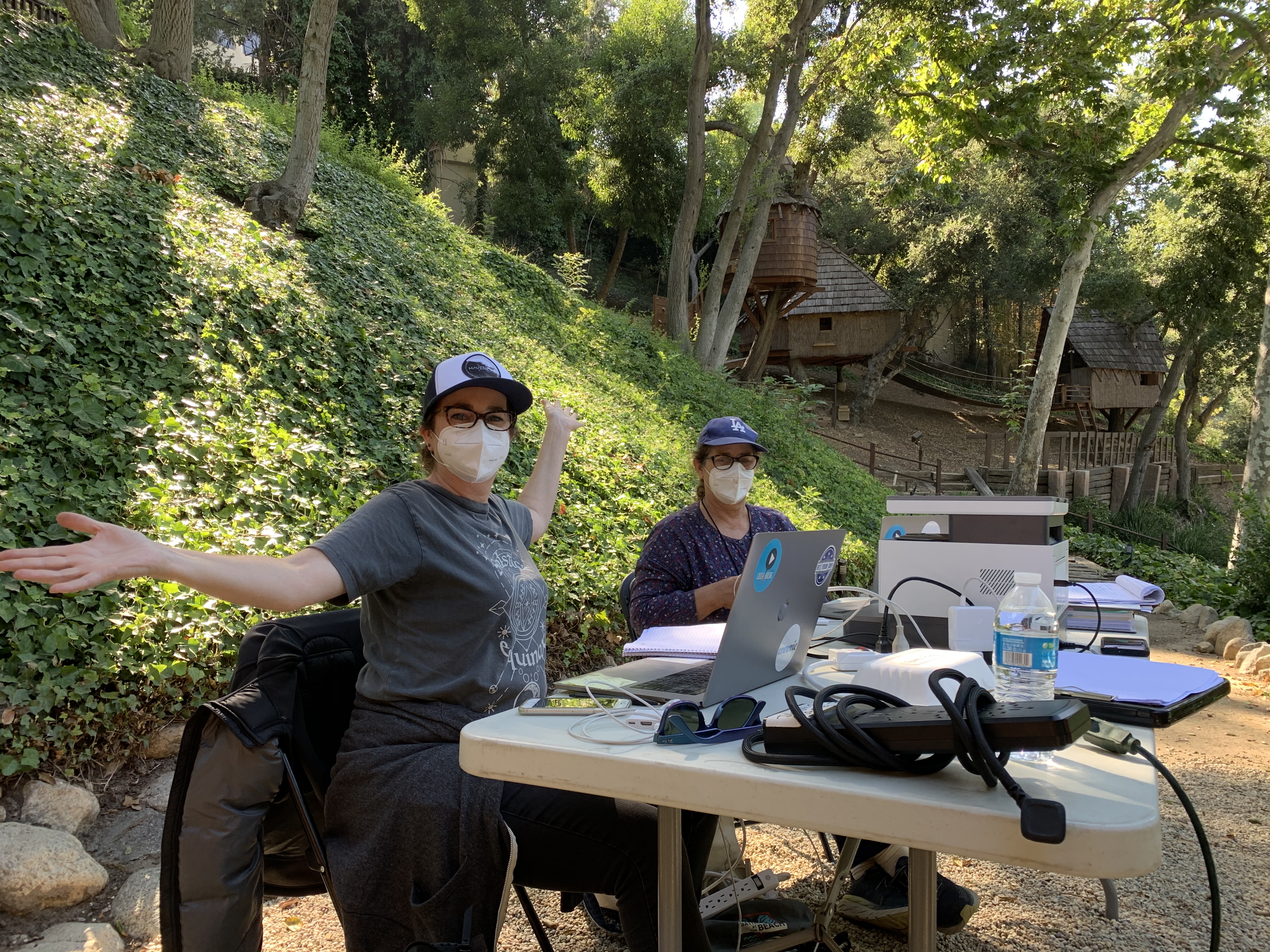