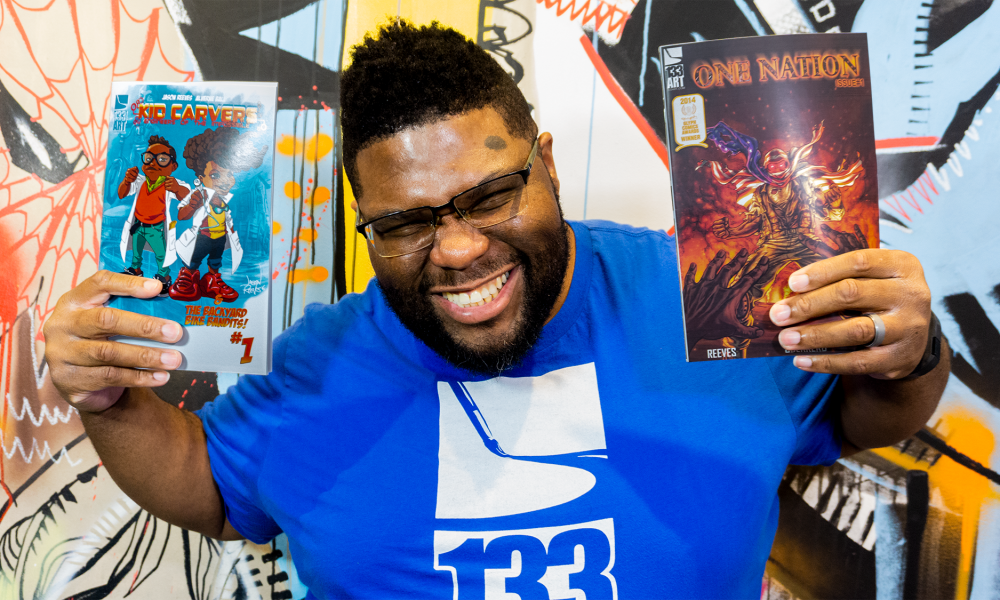 Today we’d like to introduce you to Jason Reeves.

Thanks for sharing your story with us Jason. So, let’s start at the beginning and we can move on from there.
I grew up in New Orleans, LA and I was always interested in being an artist. I’ve bee drawing since I was three yrs. old and all through my childhood the kitchen table was my studio. My friend Mark, an older kid in the neighborhood introduced me to my first comics, I remember being knocked off my feet by X-Men Classic, the reprints of the Chris Claremont stories. It’s not that I hadn’t been into superheroes my whole life, I loved Superman cartoons and Star Wars, but those were fleeting. One Saturday morning was over or you left the theater back in the day, who knows when you’d be able to see those things again. With comics, you had all the stories and images forever, the idea of collecting them and reading them over and over really resonated with me. It still does.

And every spare second after I flipped through Mark’s old comics was spent trying to make my own comics. I’d trace pages from the comics I bought using poses and action scenes to write my own stories with DC and Marvel characters and soon I was designing my own original characters. All heroes, mostly white though. Through high school I was known as that ‘dude that always be drawing’ and in my junior and senior years, I attended the New Orleans Center for Creative Arts (NOCCA). I loved going to school for drawing, although I don’t really think my teachers appreciated the heroic comic style art I loved so much I did OK.

After graduation, it was hard to pursue a career in any art much less comics. The avenues weren’t really clear and there just wasn’t enough money for college, so for a long time, I just worked menial jobs. Still, I was always drawing, always creating. Something was bugging me as I grew into an adult, I was still collecting comics and starting to attend comic conventions, there we a ton of Black comic fans that I knew but very few Black characters in comics. And even fewer Black creators. As my anxiousness for characters that looked like me to star in my favorite medium grew I made a decision not to wait on the industry to fill my need. I decided to create my own comics. Just like I did at my mom’s kitchen table.

The difference now is I would put my focus on stories of my own characters, Black heroes that related to the world in a way that wasn’t being portrayed in the comics I consumed. That’s how 133art was born. It took several years to create our first comic starring a Black lead: OneNation. Deacon Taylor, a young army recruit’s unit gets ambushed in the Middle East. Unknown to all but himself, Deacon has been hiding superhuman abilities, abilities that he has no choice but to reveal to save his fellow soldiers. As the world bears witness to its first superhero, Deacon’s life begins to spiral out of control and soon he finds out he isn’t the only person gifted with powers.

In 2005, Hurricane Katrina happened. I lost everything. Not that there was much keeping me in New Orleans anyway, I lived and I was in a rut job-wise. Almost two weeks prior I attended my first San Diego Comic-Con. It was huge for me. It’s in a lot of ways the Mecca for comics, a concentrated immersion of comic culture for anyone who loves, collects and wants to work in comics. It was my first, and it was amazing. But that not what was special about that SDCC. Not for me. For me, I met one of my best friends and one of the folks that would help me change my life, my mentor Lee Moyer. Lee is an illustrator, one of the best, and when he had heard about Hurricane Katrina he called me.

We barely knew one another at the time, at the con we had joked about us hanging out if I ever visited Portland (where he lived) and him teaching me some Photoshop tricks. At the time I was struggling trying to use this ‘new program’ that all the artists were talking about. Anyway, he hardly knew me and still, he wanted to help, he invited me to stay with him and his wife in Portland. I went. They set up a room for me, he set up a workspace for me in his office, and it was like an illustrator boot camp. I watched him work everyday, illustrating book covers, theater posters, card games, he negotiated contracts, met with clients, we went to live drawing classes, he introduced me to other illustrators (a lot of comics guys too), and yes he kicked my butt until I learned Photoshop. Those seven months in Portland was like college for me.

I went home in 2006. I was determined to make this stop in New Orleans only a pit stop. I worked a job, started a vending machine business, and 133art all at the same time. In Portland, I had made a few connections and had done a few jobs as a freelance illustrator, and I was determined to continue my career. A year later I had saved up enough money to move to Los Angeles, CA. And in California 133art grew. A few years later OneNation #1 was close to being finished and we (I was married by then) were trying to figure out how to get it printed for distribution.

My brilliant wife and business partner wasn’t too happy with the cost of printing, in order save any money you had to print copies in bulk (Either in the high hundreds or thousands and print-on-demand was still too expensive) and we were just learning to sell comics. We didn’t want to print a thousand comics that we couldn’t move, so she had an idea: Why don’t we buy a printer and do it ourselves. We invested about $1800 dollars bought a refurbished HP laser printer, a paper folder, and a saddle-stitch machine (stapler), and learned to print comics. That was 2012. By 2016 133art had created 3 comic titles: OneNation, F-00 Fighters, and Kid Carvers, spanning 11 comics. We had done several freelance projects from comics to fantasy concept design, to funeral planners. And we had opened up another wing of the company that focuses on affordable comic printing for other creators like me: 133art Printing.

Its been a learning process, juggling the creative aspects of the job, which I am more gifted in, with the business side, which I’ve gone through great pains to learn. Trial and error have become close companions but we make it work.

Overall, has it been relatively smooth? If not, what were some of the struggles along the way?
In the Power theme song 50 says: ‘I never took a straight path nowhere…’ that’s 133art. From loosing everything in Katrina to having to teach myself sales, marketing, and printing, its been a challenge. I’m still learning all of it. You don’t just wake up one day and start collecting clients for freelance or printing jobs. It’s a constant process of putting yourself and your work out there. Cultivation of networking opportunities, and pivoting when the plays you make aren’t working to your advantage.

One of the biggest struggles is finding your audience, a struggle that’s an issue for not just 133art but the indie comics industry as a whole. When I started out I knew I wanted to create content with Black leads, Black heroes but who are the people that want to purchase that kind of content. Where to find them. Over the years I’ve found some on social media which are my biggest marketing tool. Facebook, Twitter, Instagram, Peep game Comics (an e-commerce website dedicated to Black-themed comic books.), my website 133art.com, have been my go-to places.

And more recently my peers have begun to create spaces where we can draw some of these folks in, to sell our wares to them in person: Black Indie Comic Conventions. MECCA Con in Detroit, Black Comix Day in San Diego, Black Comics Arts Festival in San Francisco, Sol-Con in Ohio, the Black Comics Fest and the Black Comics Collective in New York. Wider distribution into bookstores and comic shops are the next nut we need to crack. That’s the thing about building something like this up from scratch, you gotta go one step at a time.

We’d love to hear more about your art.
133art Publishing is a Los Angeles based comic book imprint, which is a fancy way of saying we publish comic books. Our studio is comprised of a small, revolving group of freelance professionals who are frequent collaborators on several of our comic projects, Sometimes you will find me as lead artist on a project as is the case with OneNation and Kid Carvers. Or we hire freelance artists to take on some of the work, like with RET: CON one of our newest comic titles.

We also fund several of our comic projects through crowdfunding on platforms like Kickstarter, and we have two coming up in January and February of 2020: Changa’s Safari and The Crossing.

I’m proud of a few things at 133art, I’m pleased that we can be so versatile and switch from creation to physical production. Comics is the only career I’ve ever wanted to be in and I’m excited to have a hand in it from conception to physical product, for myself as well as my clients. I think that is at least one of the things that set us apart, we understand the scope of the comic creation process. I’m also proud of our flagship comic OneNation, which has three Glyph Awards under its belt. You don’t necessarily set out to be ‘award-winning’ but the recognition does give you a feeling of validation for the work that you do.

If you had to go back in time and start over, would you have done anything differently?
Ha! A few things: I would’ve saved more money, I would have learned to code, and I would have finished the first volume of the OneNation series in full!