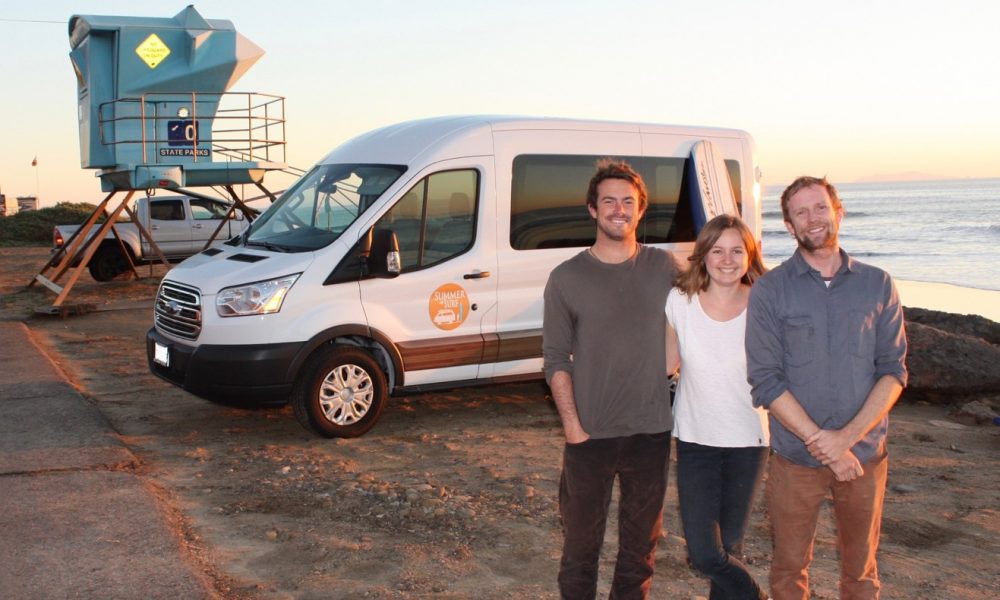 Today we’d like to introduce you to Jamie Morrison.

So, before we jump into specific questions about the business, why don’t you give us some details about you and your story.
A lot of little things led up to the creation of Summer of Surf. After graduating from UC Berkeley (my major was interdisciplinary studies with a focus on sustainability, design, and community) I pursued several ventures with close friends, including a cooperative/farm in Santa Cruz and a Surfboard retail business, both of which had some bite but didn’t quite pan out. I always knew I wanted to create my own business and be my own boss, the problem was my interests stretched far and wide and it has always been difficult for me to narrow my focus and tone down my aspirations. It was clear that I was going to create something, but what that something was going to be really came from the two most important people to the creation of Summer of Surf, my Girlfriend Dominga Opazo and my close friend Garrett Wax.

Garrett had planted the original seed four years prior to the beginning of Summer of Surf while we were working together at the Altadena Country Club. I was the head lifeguard/pool supervisor and he was one of the main lifeguards. We quickly became friends and on our days off we would head down to Trestles to catch some waves which further solidified our friendship. I soon learned that he was doing something quite interesting, he had been taking local kids, families he was close to, 1 to 3 at a time to the not so local beach and providing ocean safety and surf instruction. 3 years later shortly after meeting my girlfriend Dominga, I followed her advice and traveled to her home country of Chile to work for her uncle who started one of the first surf camps in Chile. After coming back from that trip and with summer around the corner, it was pretty clear that taking kids to the beach was what we, my girlfriend and I, would be doing summer 2013. With her support, the 7 passenger seating of my vintage Toyota surf van, the trust of the parents and kids I had gotten to know from the country club, and the support of local family members and friends, summer 2013 was a big success. Word quickly spread and by August we were booked solid. The small pilot program that was meant to test the waters, worked! From there we knew we had a business. We called it Summer of Surf because while surfing was a part of it, being in the ocean, in the surf, was what we felt to be the most important.

We grew by word of mouth through developing trust and working to create a safe and fun environment. It was always important to grow the program slowly so that we could maintain that safe environment. To date we have put out only a couple of small ads, relying almost entirely on word of mouth.

In 2015, we welcomed Garrett to the Team, the man that planted the original seed had finished college and was more than ready to join the fun and has recently become a partner as well as head of operations.

At Summer of Surf, we believe that Summer should be spent outside, that outdoor education is becoming increasingly important, that physical activity, developing a positive relationship with your body, and immersing yourself in natural settings is crucial to mental and physical health.We also feel strongly that growth is challenging but can also be a lot of fun, which is why we encourage kids to push past their comfort zone in a supportive and safe environment.

We consider ourselves to be a beach camp, we offer surfing, but the beach has a lot more to offer than that, like boogie boarding, swimming, sand castles, sand soccer, frisbee and much more. We want to make this program as accessible as possible, we currently provide many discounts and scholarships and plan to continue to expand that part of the business as we grow.

Has it been a smooth road?
The road has been surprisingly smooth. The Pasadena and Altadena community has been very supportive, parents seem to value the service. We’ve had parents who’ve been with us for four years and have really helped spread the word and shape the program. At the end of the day, you want to feel like you’re doing everything you can to keep kids as safe as possible. There’s a lot of weight in that, I would say that’s where most of the struggle is. That’s why we only have the best counselors and keep the smallest counselor to kid ratios.

So, as you know, we’re impressed with Summer of Surf – tell our readers more, for example what you’re most proud of as a company and what sets you apart from others.
We are a Beach Camp. Our name is Summer of Surf but it’s kind of a play on words, the word surf itself refers to ocean waves that break upon the shore, you can ride those waves on a surfboard, a boogie board, a hand plane, or with your body. We want to kids to have fun, be active, and spend time at the beach, for us, that’s what summer is all about. We grew up in the Pasadena/ Altadena area and are one of the few surfers from that area. We know the time commitment and difficulty getting to the beach from the San Gabriel Valley and wanted to provide access to kids who love the beach as much as us. We’re the only ones who do it, it takes a lot of different skill to bring it all together, that’s something we’re proud of.

Let’s touch on your thoughts about our city – what do you like the most and least?
I like the history, culture, and diversity, it’s hard to find places that have a lot of history in California as these places have only been around for so long. I like the museums, old shops and old Town! It’s a classy place which I like and dislike at the same time. I don’t like snobbery and exclusivity but I like the feeling of history and culture. I could also go for more proximity to the beach or at least less traffic!