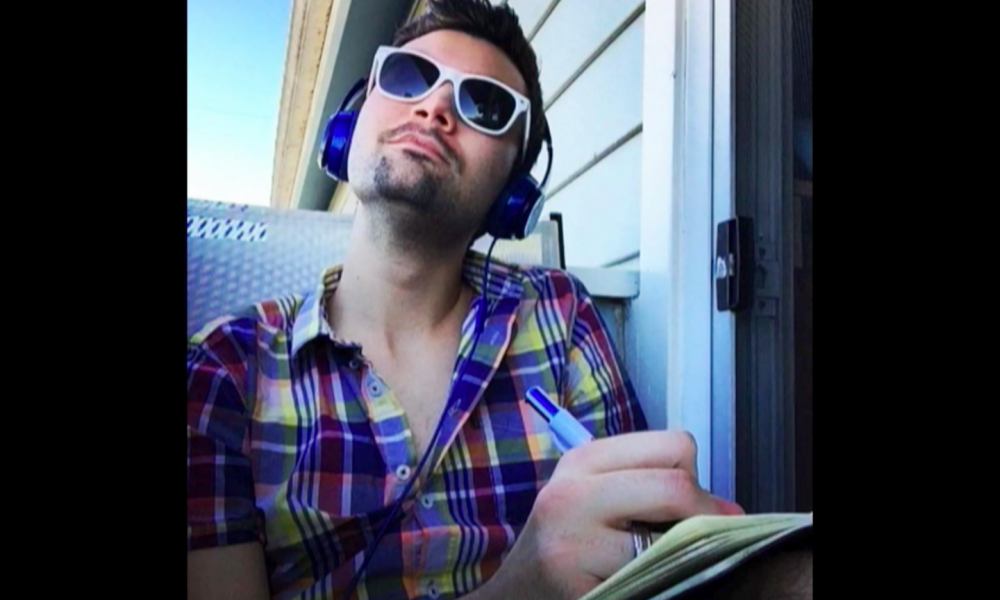 Today we’d like to introduce you to Jackson Church.

Jackson, let’s start with your story. We’d love to hear how you got started and how the journey has been so far.
It all started on my family’s Christmas tree farm in the Monterey Bay area. At a young age, my grandmother strongly encouraged me to study piano but due to my stubborn independence, I rarely practiced my scales and composition pieces. I sight-read and faked my way through a year of lessons before calling it quits. But the music bug didn’t stay in hibernation for long… At the age of thirteen, escalating family issues influenced me to move out of the house and into an abandoned cabin on the farm, which was built by my great-grandfather in 1915. I turned back to music as a creative outlet and picked up piano lessons again and taught myself how to play the guitar. It wasn’t long until the 100-year-old cabin became my favorite getaway and first studio space. That’s when I fell in love and have been hooked on music ever since.

I privately wrote songs for two years to cope with my frustrations before mustering up the courage to share them with my friends and family. It wasn’t until then that I decided to further explore this newfound passion. So I decided to make the move to Hollywood after graduation and attend the renowned school of contemporary music, Musicians Institute. But the college preparatory school wasn’t fond of me not attending an accredited university, resulting in an intervention with the music director, school dean, college counselor, and most of my family and friends encouraging me to take the more traditional path. To prove my dedication, I worked every available shift at a local coffee shop and did manual labor work on the farm in order to save up enough money to help fund my move to Los Angeles.

Since then, my music has been licensed and synced for film, television, and visual media projects internationally in countries like Japan, UK, and France. I’ve contributed original music to non-profit organizations and worked with various producers on writing projects for film/TV, major label artists, and several up-and-coming artists. Recently, I was the semi-finalist in the international competition Song of the Year for my self-written and produced song “Waiting for You,” which also received an honorable mention in USA Songwriting Competition, whose collective recipients include Meghan Trainor, American Authors, and Matthew Koma. Today, I continue to work out of my home studio on recording, writing, and production work for various artists and projects in the LA area.

Overall, has it been relatively smooth? If not, what were some of the struggles along the way?
The biggest struggle that I had to face while making the decision to have a career in music was acceptance. It’s something that I believe every one of us has to deal with at one point or another. But it’s especially difficult when making a career decision as a teenager. It’s a lot for anyone to handle when almost everyone you know is trying to encourage you to have a “back up plan” or make music a side hobby instead.

I remember coming home one day from school and seeing stacks of papers on my desk of outlines with other “secure” career opportunities that my mom felt I should be considering instead. Or another time when my voice coach and school music director explained to me that I may not be cut out for the music industry due to how extremely competitive it is. Of course, everyone who was pressuring me to reconsider was doing it for my best interest. But as difficult as the conversations were, the pressure only made me want it even more. It’s not because I had something to “prove,” it just helped me and others realize how serious I truly was about my music. I was never so sure about something before until I was faced with the reality of rejection — I knew I had to do it.

I’m a dreamer and a believer. I was the kid who believed (and still does) in magic. I knew I had a talent and given my work ethic, I believed that I would succeed if I just didn’t give up. So that’s exactly what I did, I stuck to my guns and my gut, kept my eyes on the prize, and kept going.

Jackson Church Music – what should we know? What do you guys do best? What sets you apart from the competition?
As a freelance music producer and songwriter, I constantly find myself working on some of the most interesting projects that I never thought I would get involved with. From engineering audio books to licensing music for visual media outlets to creating a production company, it all keeps my work interesting and challenging. Every day is different and honestly, I wouldn’t have it any other way.

I’m known as a top-line songwriter and producer in the industry. That means I excel at creating catchy melodies. So most of my clients come to me for my ability to write a memorable hook or produce an interesting and unique sounding instrumental for their song. To me, the most fascinating part of music is how certain tunes can get stuck in your head for days at a time. So that’s what I aim to do — get my tunes stuck in other people’s heads!

What I’m particularly excited for right now is a new project that I’m currently developing with my writing partner, Eleni. This summer, we are launching our official production team under the name UNSIGNED. We will be releasing singles that are produced and written in house, not as artists per say, but as finished examples of the production quality that our team can create.

Unsigned music has come a long way, especially in the last five years with artists winning Grammy’s who aren’t represented by a major label or YouTube singers who hit stardom by sharing videos of cover songs and original material online. So the idea is that under the name UNSIGNED we can be more easily discovered by artists or music industry executives in hopes to have more opportunities to work with new or developed talent that we believe in.

What is “success” or “successful” for you?
I believe that success is not something you pursue; it’s something you attract by the person you become. So to me, success is about personal development and becoming a better version of yourself every day. That’s why I’m always educating myself through books or articles to become a better person overall. I’m the type of person that likes to set high goals and challenge myself to achieve them. So the way I track my own success is not only by hitting these goals and crossing them off my list, but more importantly, by evaluating and learning from any mistakes that I made along the way.