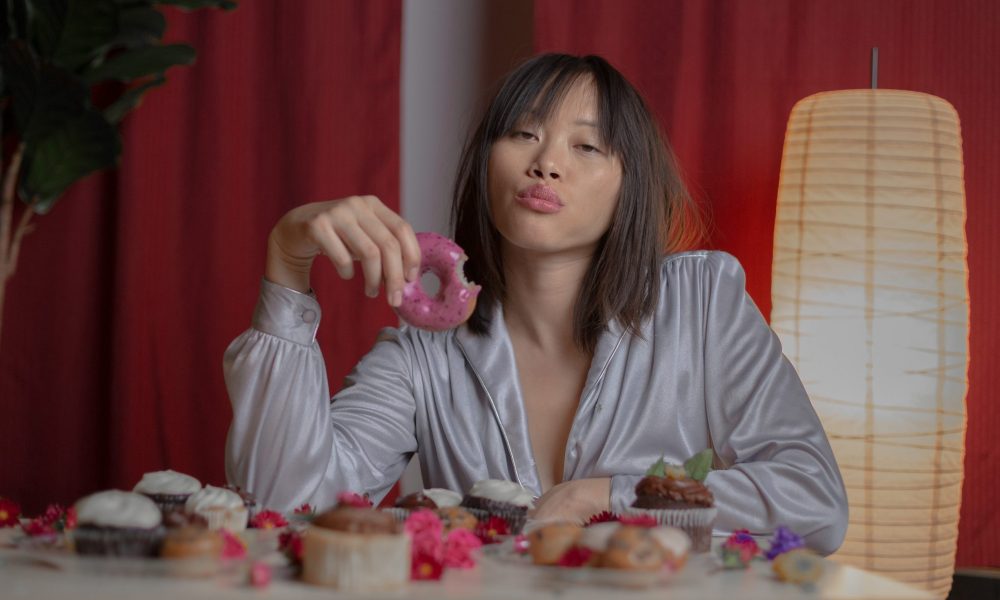 Today we’d like to introduce you to Jackie Ho.

Thanks for sharing your story with us Jackie. So, let’s start at the beginning and we can move on from there.
It started with a nap on a Sunday in early April of 2014. I remember bouncing off the futon in the living room and into the kitchen. I had been craving something sweet all week, eyeing this recipe to make vegan mango bread. I had all of the ingredients: whole wheat pastry flour, cane sugar, sea salt, baking soda, baking powder, cardamom (my favorite because it’s so fragrant), flaxseed meal (this one hit me strangely, like what the heck was that?), and, of course, one really, really ripe mango as its star. Guess which one I forgot? The star. Without it, my bread was completely shot.

Granted, I had a mango. I didn’t display any patience in waiting for it to soften, however. They say that love is the secret, which I firmly believe, but it’s only a big part of it. For the recipe to complete itself, you need an infinite amount of patience with the bake, with yourself, with life. Love. Patience is the key. I wish that had incorporated itself thoroughly in my decision-making when I first started dating the same time I started baking. My ex-boyfriend of four years broke up with me and I had to learn how to fall in love all over again. I had failed romances in LA that took me to NYC and back again. More failed attempts at relationships including a spectacularly toxic one in business. I’m still learning as a matter of fact with as much compassion as possible as well. I don’t have a brick and mortar, but my reputation precedes me.

Patience brought me here today. It took me almost six years to bake myself to love again. So I suppose this is really my story: I bake because I love. I bake vegan, gluten-free sweets to not only rebel against the traditional use of milk, butter, and eggs, but also the ways of romance where the guy is supposed to chase the girl. I’m always the initiator as opposed to the responder, the baker rather than the consumer. I often questioned whether taking out the “meat” of the matters inevitably took out their “soul” so much that to substitute it with “false” ingredients (false hope and expectations) was to fill a void in my heart with unfulfilling connections. But no, it was deeper than that. I had to innovate to create a fuller, more whole sense of self after breaking my heart so many times. And we’ve all been there, haven’t we? Throughout my life, I’ve been self-sufficient. With baking, I began teaching myself until life took the chalkboard with further instructions.

It’s “a truth universally acknowledged,” as Jane Austen would say, that everyone loves an epic hero’s journey, a love story pastry-piped with hope and dreams. I’ve pivoted as much as Ross Geller in Season 3 of Friends back to my truest love: writing. I’m currently writing a cookbook for the heart. The soul.

Great, so let’s dig a little deeper into the story – has it been an easy path overall and if not, what were the challenges you’ve had to overcome?
With the aforementioned, you can say it’s been as smooth as rocky road chocolate.

I uprooted my entire life from LA to a bigger city I had never been to before and only read about in Wikipedia and rough Googling. I went blindly to New York City with only two suitcases and a carry-on. Oh, and of course, a small whisk as my totem of sanity. I often look back to that time in my life and think: Wow, I really did that. I loved that flagrant disregard for anyone else’s desires but my own. That sugar rush.

Like any hero’s adventure, it didn’t come without its troubles. I found myself bouncing from place to place with no clear vision on where to settle and that was mentally distracting. I went from East to West Harlem to Fort Greene to Williamsburg to Chelsea to finally, Astoria. I procured two serving jobs in a Japanese restaurant and a well-known venue in Times Square; I doubled on shifts in one job if I wasn’t working the other, but all the days I was working back to back in the dead of my first east coast winter, carrying cold, hard cash in my pockets. I was bone-tired. But somehow, I trudged through the snow and sleet and slippery subway stations. I got to know New York intimately not only through living its hustle, but also eating through it. I had a whole cache of establishments known for their famous treats: Levain Bakery for their cookies, Serendipity 3 for their frozen hot chocolate, Little Cupcake Bake Shop for their Brooklyn Blackout Cake, Cafe Lalo for their affogato. The mad scientist within me buzzed with excitement to convert each thing I loved to veganism and gluten-free-ism.

There’s also something to be said about the New York Hustle, which sounds like a pop-and-lock dance move. It gave me gumption. It gave me grit. No flour, no pearl kind of experience. Because, once you’ve earned that feeling, you keep it with you always. And I accumulated it, nacre after nacre, disappointment after disappointment in love, which did sidetrack me from refining my professional goals. (Dating is different in New York than it is in LA, but only slightly. I think the generational ennui and transiency still sweeps every metropolis, lending the air of casual relationships a harder edge to fall from. I still have hope regardless for everyone.) I couldn’t escape the irrationality of multiple failed connections. So I baked. The grocery stores were my therapist’s office. The kitchen, my confessional of sins and sweets.

Further, I thought I had wanted to get into the business of baking strictly for business. But I couldn’t find the heart of it anymore, the “why,” so I’m in the phase of re-evaluating what my business looks like, especially after having to bootstrap for so long, taking on small batch orders, spending more than I was profiting. So far, it’s turning out to be, unsurprisingly, the business of love, of storytelling. It’s the start of something new from something old. Something raw.

Please tell us about Model Baker.
I’m known as “Model Baker.” It’s just me, the sole proprietor, the freelance caterer, the private chef, the recipe developer. It came from my Instagram handle, actually, which amuses me every time I think about it. Totally unintentional until it made more sense as the years baked on.

I’ve been modeling in LA since 2012. Without delving deep into fitness and nutrition, I wouldn’t have found baking and a deeper appreciation for health and wellness. My baking journey coincided with the rise of veganism and the gluten-free lifestyle so the availability of resources and interest in healthier treats gave my business a boost with small batch orders and then a few large party catering gigs. I’ve also been sought out for consulting and recipe development for startup companies. I thoroughly enjoyed those aspects of my job because I got to share the process with someone as passionate as I was about their products and vision. I’m a critical analyst and I love getting down to the nitty-gritty.

I specialize in vegan, gluten-free treats, but what I’m most proud of are my cookies. I have a signature lemon coconut cookie that friends have told me years later how it’s been embedded deeply in their gastronomical memories. That is my baby. I gave birth to her in New York City during the most historical blizzard to date, the coldest winter I’ve ever experienced with a CPA who was a doppelganger of Keanu Reeves.

Honestly, every recipe I have tested and tasted with friends and family is made from scratch unless it’s a wild flavor profile that requires assistance from premade ingredients such as vegan, gluten-free marshmallows. (Shout out to those because I’ve made real marshmallows in a commercial kitchen and it’s not an easy feat.) The best part is that all of them have a story behind them. Without their histories, there wouldn’t be that mysterious x-factor that lingers on your tastebuds and your soul for days.

Do you look back particularly fondly on any memories from childhood?
Catching all the caterpillars around my apartment complex because I wanted to see them crystallize into butterflies. I was fearless. Girls weren’t supposed to be into creepy, crawly bugs. But I’ve loved that theme of transformation throughout my life. Baking is the same thing. 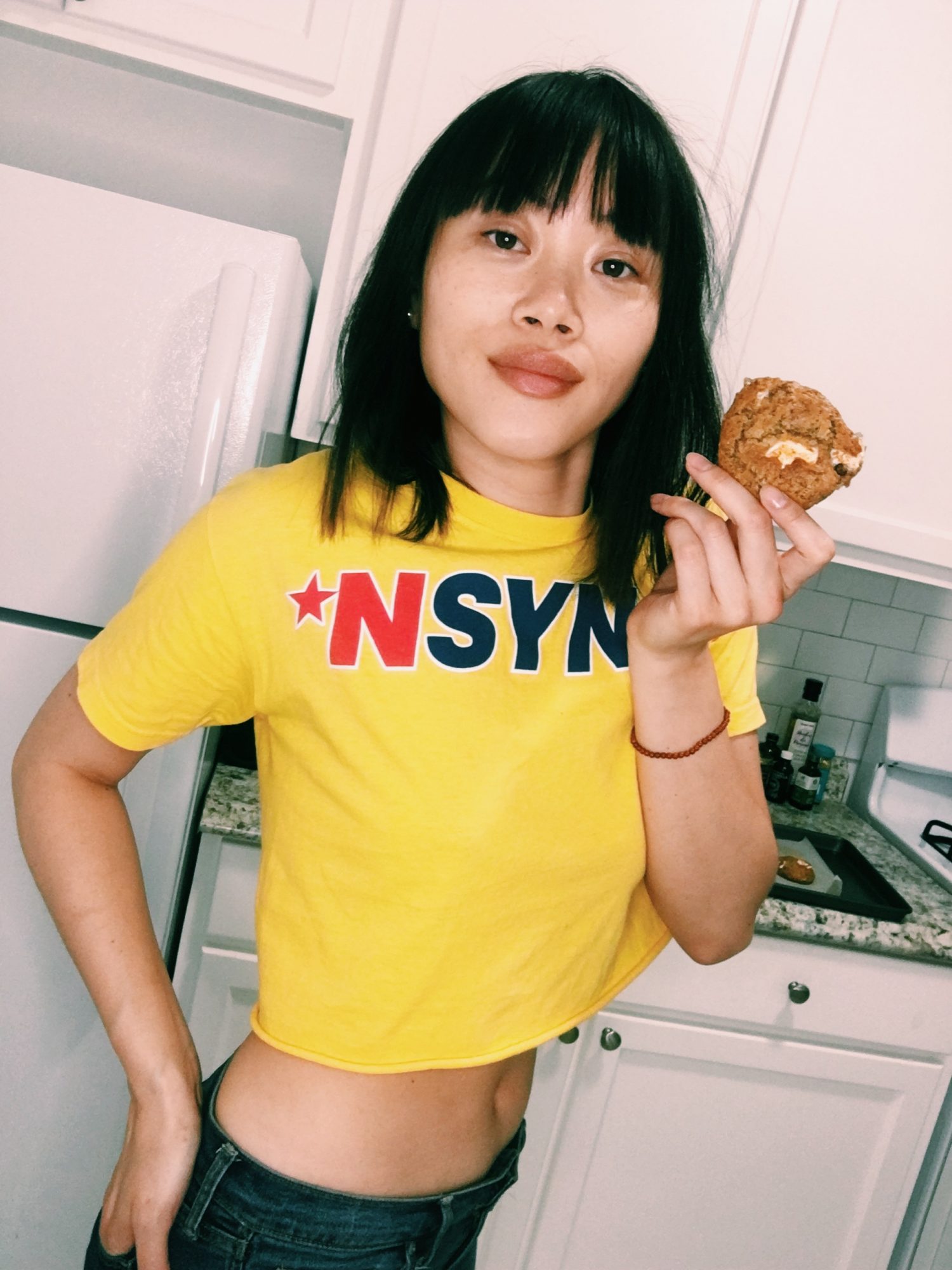 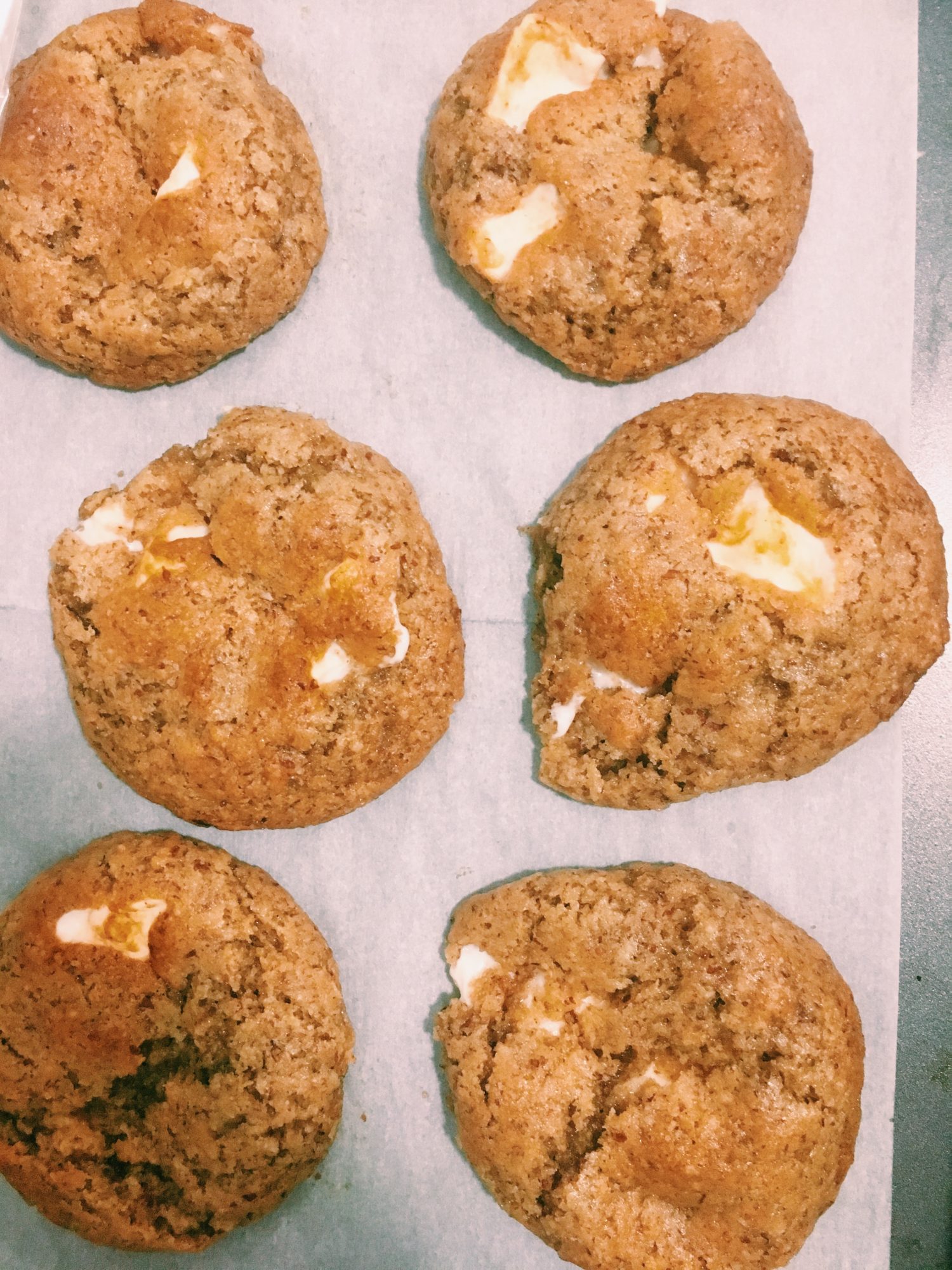 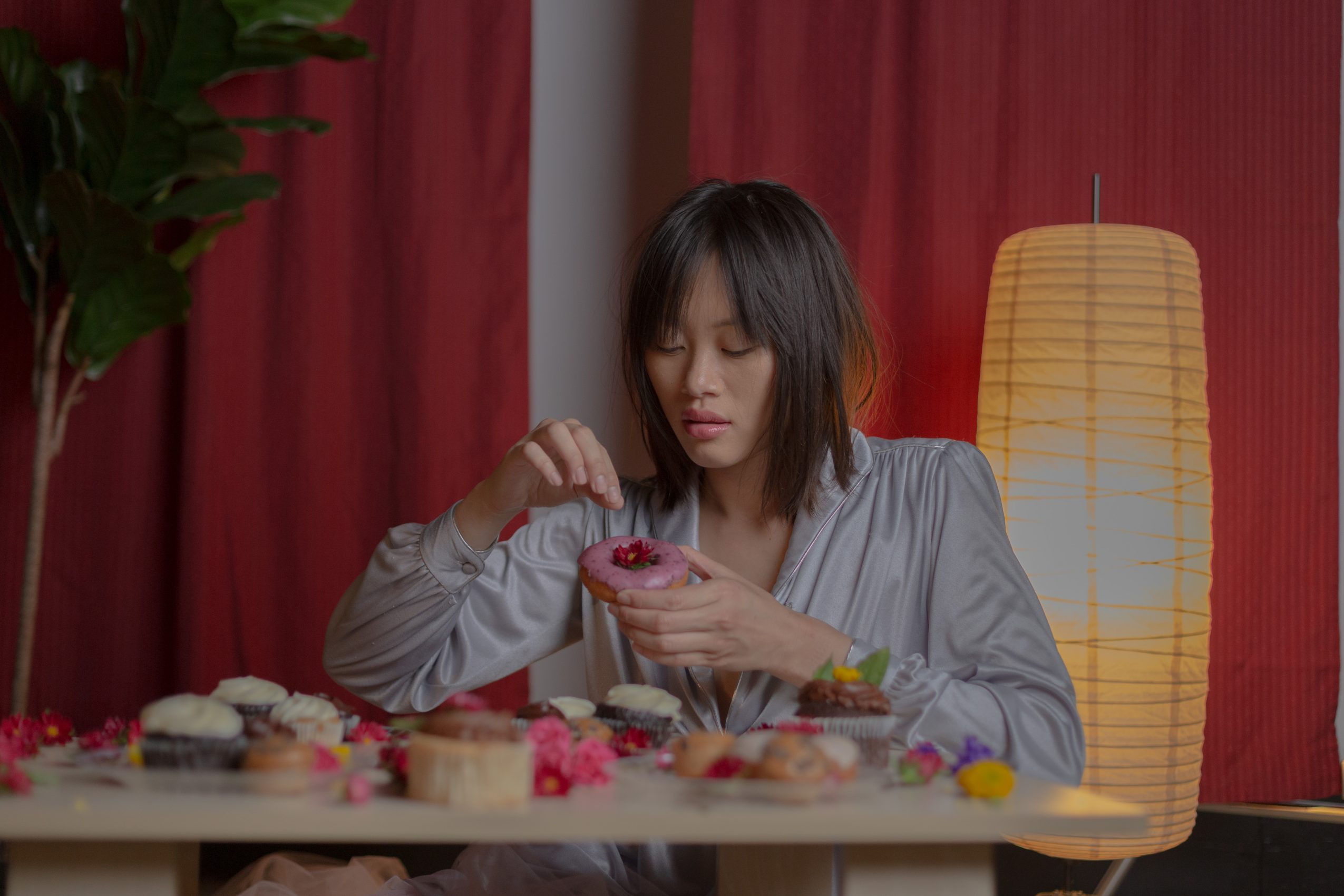 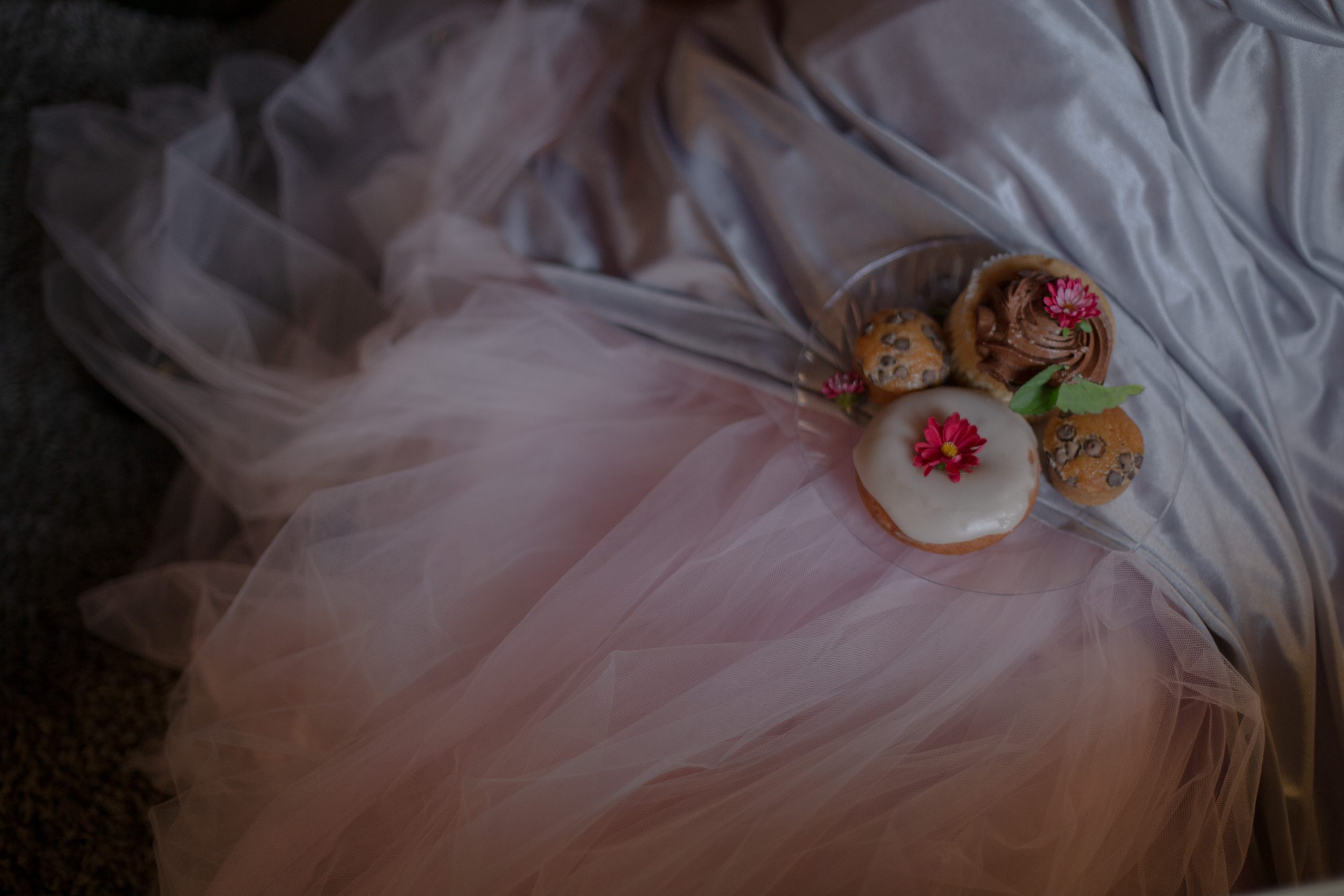