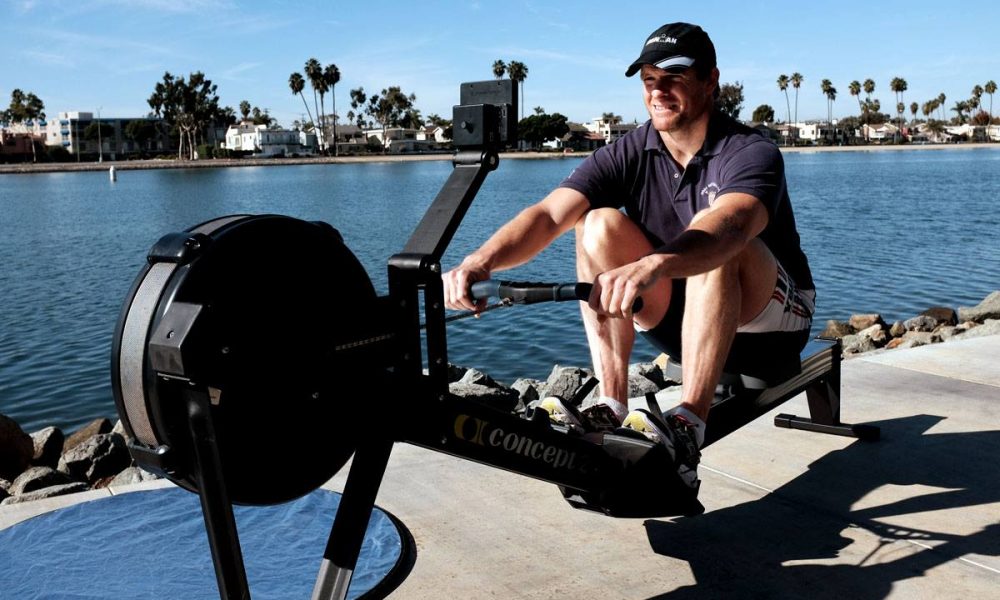 Today we’d like to introduce you to Jack Nunn.

So, before we jump into specific questions about the business, why don’t you give us some details about you and your story.
My father, John Nunn, is an Olympian who won the bronze medal in Rowing in 1968, at the Mexico City Olympic Games, and he was the U.S. Olympic Men’s team rowing coach in 1976, Montreal Olympic Games. He got us all interested in sports growing up. I have four older sisters, and he coached all of our teams: soccer, baseball, softball and ice hockey. Both of my grandfathers played professional football and my great-grandfather was a rower at Columbia University in the early 1900s. I guess you could say it’s in my genetic makeup to be destined to be an athlete and or rower. Since I can remember I have always wanted to either make the Olympic team and or compete and finish a full Ironman.

About 10 year ago, I started Roworx Fitness in Long Beach as I was burned out of training on my own with the US National Rowing Team and decided to create an Indoor Rowing program for the masses in which everyone can learn and get in the best shape of their lives with Indoor Rowing Classes. The rest is history….

In 2008, one of my best friends suggested that we train for our first Ironman together. I immediately said yes and signed up for my first Ironman in Nice, France. I would later find out that it was– and still is–one of the most grueling Ironman courses in the world. The bike portion of that particular Ironman travels 112 miles through the Pyrenees Mountains, which was insanely hard, especially since it was 95 degrees on race day. Upon completing Ironman France, I was hungry for more and knew that it was just the start of another chapter of fitness in my life. Since 2008 I have gone on to finish 9 full Ironman’s, 6 half Ironman’s, and over 100 various triathlons around the world. Along with managing and teaching classes at Roworx I have created a Triathlon coaching program called Triworx in 2016 in which I offer personalized training and coaching plans for any endurance and or triathlon event. I am also a sponsored triathlete led by Red Ace Organics Beets, Rudy Project, and MG Sport Magnesium.

Great, so let’s dig a little deeper into the story – has it been an easy path overall and if not, what were the challenges you’ve had to overcome?
Like any fitness business owner it’s always up to you to keep the classes going and the energy up so that everyone can get the best possible experience. Over the past 15 years of being involved in the fitness industry, I would have to say the most important aspects are consistency, time, patience, and determination. Hiring a great staff and keeping your fellow instructors happy is a must. You have to hold yourself accountable and take responsibility when it’s your own business and learn to put your ego aside while putting the customer first.

Please tell us about Roworx Fitness.
At Roworx Fitness we specialize in leading 1 hour indoor rowing classes with spectacular views of the water and sunsets while overlooking Marine Stadium in Long Beach. Marine Stadium is a California historical landmark in which it was the site of the 1932 Los Angeles Olympic Games Rowing venue. Rowing classes are on fire at exercise studios around the country as it is a full-body workout, low impact workout that burns up to 800 calories per hour. Central to the Roworx philosophy is our focus on teaching an efficient, safe, and effective rowing stroke. Anyone can get a workout by moving back and forth on a rowing machine but the difference us at Roworx you will learn to use the machines the way Olympic rowers do. You will maximize your efficiency, protect your back from injury, create more power, burn more calories, and see results sooner. Each class, from beginner to advanced, begins with a warm-up, interval H.I.I.T. training segments, consistent rowing segments, specific rowing drills, squats, pushups, weights, and some short intense 500 meter pieces to conclude the class as well as proper stretching. Anyone can do try rowing as it works 86% of the total muscles throughout the body and instructors will make sure that you are consistently maintaining good technique. We also offer some foundation classes for new rowers who would like some extra focus on the basics of the rowing stroke.

I’m most proud that Roworx Fitness has been in business for over 10 years and I get to do what I love every single day. Our camaraderie is probably the best aspect of Roworx Fitness as everyone is there to help and support each other and we really have the best members in any fitness center I’ve ever seen. When I coached the Loyola Marymount Men’s Varsity Rowing Team last year one of my proudest moments was having the team captain come up to me and tell me I was the best coach he has every had and that he believed I have a calling for the sport of coaching rowing at any University.

What sets Roworx apart from other fitness centers is the ‘Multi-Million Dollar View.’ We have a panoramic view of the water in Marine Stadium so you really never get bored or find yourself looking at the clock during class as it flies by while getting the best heart pumping workout of your life. All of our instructors have past rowing experience in college and are passionate about rowing and making sure every student is getting the most out of each workout. I have personally been coached by some of the best rowing coaches in the country if not the world. My father, John Nunn, is one of only a handful of American Olympians to have won an Olympic medal in rowing (1968 Mexico Olympic Games Rowing Athlete Medalist) as well as being an Olympic Coach (1976 Montreal Olympic Games Rowing Coach). My collegiate coach at Berkeley, Steve Gladstone, just won his 13th record breaking National Championship with Yale this past month. My US National Team coach, Mike Teti, won a silver medal as an athlete and a gold medal as the coach of the 2004 Men’s Olympic Rowing Eight in Athens. I have had many more famous rowing coaches over my 20-year rowing span and I apply all of this knowledge during each and every one of my Roworx Indoor Rowing Classes in Long Beach.

Do you look back particularly fondly on any memories from childhood?
I would have to say it has to be when I was 15 years old and came home to tell my father I was no longer going to play and was going to quit both baseball and soccer varsity teams. My father was sitting down in the kitchen and he told me that I would have to get a part time job or find something else to do. I immediately replied and said what about joining the junior rowing team in Long Beach. My father immediately leaped out of the chair and ran upstairs to call the high school rowing coach and the rest is history. My father was ecstatic and in that moment the sport of rowing would change my life forever and make me the person I am today. Since then I was recruited to Cal Berkeley with a full scholarship while winning 3 National Championships and 4 PAC-10 Championships. Since graduating college, I have traveled to England, Japan, New Zealand, Australia, Italy, Austria, Germany, Canada, and all over the U.S. for various rowing events. My proudest achievement would have to be winning the silver medal at the world championship with the US National Team in 2001. I worked incredibly hard for six straight years of rowing and won my first international medal continuing down the road to one step closer to making it to the Olympics. The feeling of being one of the best athletes in the world in my sport was amazing while having my father watching the race.