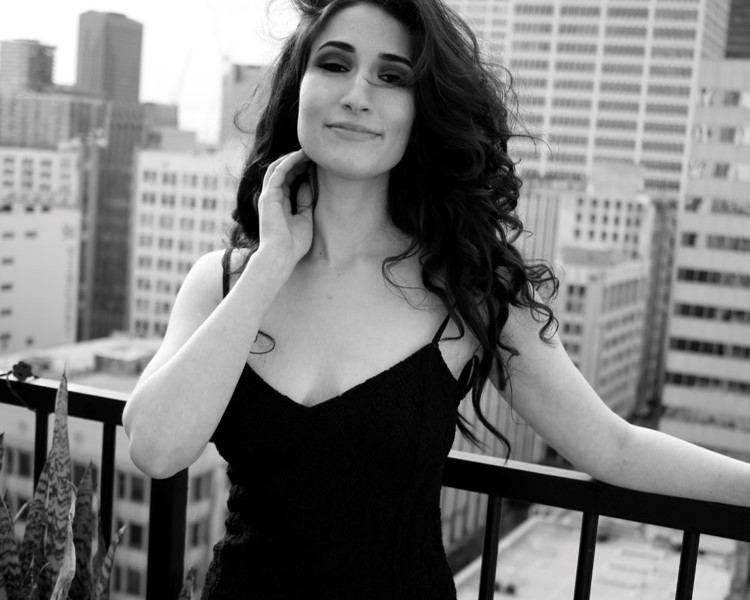 Today we’d like to introduce you to the beautiful and talented Madelin Adena Smith.

Madelin Adena, please share your story with us. How did you get to where you are today?
I never saw myself being a makeup artist. Instead, my career grew out of one last attempt to support myself as a novelist. For the majority of my life, writing was my sole medium for self-expression, the only safe space I could find in a childhood that was markedly zipped up, bleak and lonely. The irony of this, however, rests in the fact that what we miss out on in life we often overcompensate for elsewhere, and that’s exactly what I did: in the absence of magic and color, I made my own. I wrote my own adventures.

Several years later, after living in both Switzerland and France and graduating from an Ivy League University in New York City, I was still determined to make it as a writer, come what may. While my friends went on to work at prestigious firms and corporations with proper paychecks and 401Ks , I proceeded to work as a dishwasher, babysitter, copywriter, astrologer (which I’m actually trained for), life coach (which I’m also certified for from NYU), pro blogger, website builder, and operations manager for an aphrodisiac-based cooking school. To say I looked like the black sheep in the flock of pinstripe suits would be an understatement. I would cringe when people would ask me, “So what do you do for a living?”.

While I was in between leases, I decided to stay with my mother, who had just moved to New York and left her career as a celebrity business manager to venture into fashion, vintage jewelry specifically. On the day she was interviewing models for her upcoming lookbook shoot with both the stylist and photographer, I retreated to the coffee shop to write for a few hours, only to receive a frantic call from her later that afternoon asking me how quickly I could be back at the apartment. The moment I stepped into the door–sweaty and wondering where the fire was–I was accosted with a velvet dress, diamante necklaces, red lipstick, and heels while the photographer exclaimed I was just who he had in a mind and proceeded with an impromptu photo shoot. One week later, the former overweight girl with the bad haircut, braces, and the can’t-miss-it-if-you-tried chest is suddenly the swan model. As I sat in the makeup chair chatting away with the artist, Kaarin Lanyi, who is now my mentor, it suddenly occurred to me how much I know about makeup. Having spent years as the overlooked, misunderstood artist in the Bridget Jonesesque physique, I often toiled over my face with powders, lotions, potions in an attempt to make people see me. Not my chest. Me. I wore massive earrings, dramatic eyeshadow– anything to keep people focused on my face. Whether it was for my mother’s line or not, being the model for a jewelry line felt like the ultimate manifestation of multiple passions that had been brewing behind the scenes, unbeknownst to me even, for years. Unlike novel writing, where I could work on a project for 2 years without feeling any closer to expressing something people could digest and understand, modeling was instantly expressive, creativity passing through me and captured right there and then. The immediacy of this excited me. The environment of set life excited me. The way a 5-minute touch-up and change of scenery could completely transform the character and story excited me. At 5’4, I knew a life of modeling was a stretch, but makeup was something I could do. I think I applied for a job at a makeup counter that very week.

Since that first job, many things have changed. I moved to Los Angeles. I got hired and fired. An assisting job I moved here for fell through. Still, through all of the ups and downs, I kept going, borrowing the stamina and perseverance needed for novel-writing to convince myself that eventually, with the right combination of stubbornness, style, and sheer will power, things would work out. And they have. I’ve since ventured into painting and, for the first time in my life, finally feel like I have something tangible to show for myself, that there is zero discrepancy between what is on my face and what’s behind it.

Has it been a smooth road?
The nature of the industry can feel bipolar at times. One month you’re so busy you’re a walking zombie, the next month you wonder if you will ever work again. In the latter of those moments, it’s easy to question everything–the path you have chosen, your abilities, your creativity at all. But that’s a rabbit hole not even Alice should go down. For when the call inevitably arrives–because the call always arrives– with a job so big you are sure it is out of your league, you have to be ready not to get in your own way. So many people, I have realized with time, are not afraid of failure but of success. We have all failed so many times it is pedestrian at this point. But success? Your own personal brand of success? That takes chutzpah as my grandfather would have said. That takes innovation and cleverness. That takes clear decision-making and forward motion with no backward turns. Success means zero self-doubt. It means disappointing all the people who had other visions for you and making peace with the fact that they’ll be unhappy with you. To me, that is the greatest challenge, getting out of your own way. The rest–the money, the hiring, the firing–is just details.

Any predictions for the industry over the next few years?
Despite my love of black eyeliner and fashion, on the day-to-day on the street, I am hoping for a return to fresh faces and Victorian-esque skin. Whether that happens or not, I don’t know, but I think I do shock some of my clients when I show up with nothing and they learn that I wear no makeup 90% of the time. To that, I can only bring in my literary motto, that ‘context is everything’, and hope that the industry as a whole begins to embrace that. Apart from that wish, I see technology playing a much larger role in the development of makeup. The company I consult for, Matchco, for example, is a precursor of what I believe is to come.

What has been the primary challenge you’ve faced?
Time. I’m not the fastest. I love what I do and sometimes just love to get lost in my work and treat it like a portrait that continuously evolves and takes shape. Unfortunately, more often than not you just have to get a face on and beat the clock.

What advice do you wish to give to those thinking about pursuing a path similar to yours?
Don’t be afraid to reach out to people–online, in coffee shops, on networking sites, or via social media. Ask to collaborate and build connections, preferably with those who don’t necessarily do the same thing you do. It’s good to know a wide network of photographers, stylists, hairdressers, producers, art directors etc. Yes, it is important to cast your net wide, but most importantly, make friends in the industry and not just with the aim of using them to get you somewhere as is often the case in LA. Just make genuine connections and look out for each other.