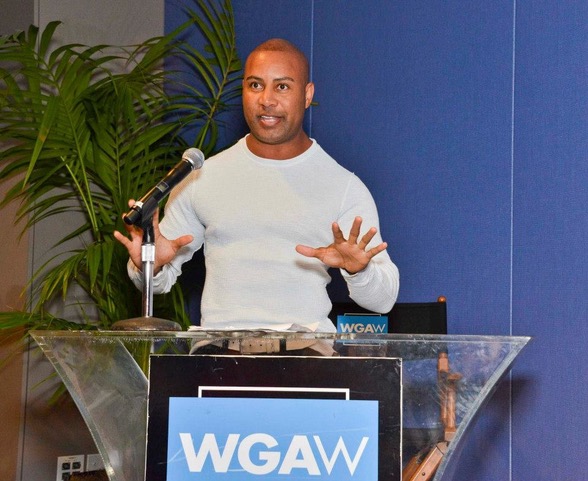 Today we’d like to introduce you to Hilliard Guess.

Hi Hilliard, it’s an honor to have you on the platform. Thanks for taking the time to share your story with us – to start maybe you can share some of your backstory with our readers?
I was born in Detroit, Michigan — youngest of five, Military Brat in a family everyone called The Cosby Show in the ghetto. You see, we moved out west to East Palo Alto/Menlo Park California when I was around seven years old in the late 70s. At the time, our city was on the list as one of the most unsafe places to live in America and even later become the background/set piece for the movie “Dangerous Minds” (my family had no idea what we were getting into, we just saw black folks, a church my parents loved and that was enough for them) despite the obstacles, violence and terror that surrounded us.. we still had lots of love.

Soon, being the underdog/outsider that I am, I was drawn to the downtown Punk Rock Scene and was part of that second wave of kids (some of us Afro Punks), and co-founded the Palo Alto Rudeboy’s. For many years we ruled the town; at first we were six, smart-dressed black cats in 60s shark-skin suits, Pork Pie Hats and Doc Martin Boots. Eventually, the gang spread across the Bay and we’d have guys and girls of every race rocking the 60s style, listening to SKA/Reggae/R&B, 2Tone music, riding vintage scooters and teaming up to beat down Nazi Skinheads in Mosh Pits at Fishbone Concerts or Rocky Horror Picture Show midnight screenings on the strip.

I would later move to San Francisco in the 90s to pursue my acting/dancing career and soon found myself in dance class five days a week and landing featured spots in music videos, commercials, touring and even booked some cool acting roles on TV series shooting in SF at the time. But LA was calling to me, so I moved in the mid-90s with a focus on acting until the early 2000’s when I said yes to assist an award-winning producer on a major film. It was there that I learned many tricks of a successful producer that, years later, payed off when, after the long strike of 2007-08, I got the urge to produce my own projects and be my own boss.

I call myself an “old soul,” ‘cuz, I mean, it’s no wonder, with nearly 40 screenplays under my belt, more than half of them are historic, bio pics dealing with somebody being terrorized in the gritty, underdog, murder-death-kill world.

I spent over ten years producing in the indie lane building a strong career for myself that’s made me invaluable on a set, in a room and from script to post to screen. I’ve produced over two dozen TV pilots, films, digital series and music documentaries through my production company Hilldog Productions. I was featured in the iTunes book “The Top 100 Indie Writers in The World” and currently moderate/host the WGAW 3rd & Fairfax Podcast and Screenwriter’s Rant Room.

I’ve written on shows such as The Russo Bros SYFY series DEADLY CLASS and was EP of the upcoming digital anthology series TICKER (we just won Best Series at 2021 Amsterdam Int. FF). I’m also an assignment writer and together with partner Pamela Azmi-Andrew, we’ve been creating film/TV series and pitches/scripts for some top producers and companies in town. The two of us pegged ourselves “Mental Duet” — a dangerous writing/producing team with the skills to pay the bills.

I have a slate of projects in development and am repped by Matt Baldovsky (UTA) and Rashidi Hendrix (Metallic Ent) and have turned myself into a powerful voice for Diversity and Inclusion in Hollywood — thanks to the beautiful work we’re doing on the WGAW Committee of Black Writers — a special shout out to my co-chair Michelle Amor and vice chair Bianca Samms.

I also serve as co-chair WGAW The Education Committee and am also a member of the LGBTQ+, Latinx and Genre Committees. My own deep, personal connection and drive to produce high-quality film and TV are changing how Hollywood is representing diversity in all aspects of production.

Alright, so let’s dig a little deeper into the story – has it been an easy path overall and if not, what were the challenges you’ve had to overcome?
It’s always a struggle when you’re an indie producer. You’re always trying to find money for a project or being forced to accept a writing assignment for well under your usual quote. It comes with the territory.

My biggest issue these days is I’ve been off of my last staffing job on a network series for three years. Hollywood doesn’t take into account that those three years were filled with development rooms, producing indie projects and coming close to selling on many TV/Film projects. Instead, one has to argue why three years have went by without another full-time staffing job. Well, it’s simple. It was on purpose. I was trying to pivot but have gotten burnt as of recently and feel now’s the time to get back to something more steady. I’m truly grateful for all I’ve learned developing under some horrible If-Come Deals that can drag on for over a year if you let them. But I feel so much further than other writers in my predicament. I feel like I have the ammunition I need to land where I’m supposed to be and hopefully, I won’t have to go too far backwards.

Appreciate you sharing that. What else should we know about what you do?
I am a screenwriter, producer, director and podcaster. In that order to be exact.

I’m becoming known for being a “fixer.” Someone who can come in and do a rewrite in record time that can help a company garner stars on a film. I guess I know what actors are looking for and know how to hit those kinds of visual moments that might get them excited enough to want to play a role. I also am a hired producer, coming in to help a production come in under budget in the knick of time as I manage to oversee a project to its finish line.

What separates me is my perspective on the world. I study human behavior, anticipate problems and I also love history. I think of myself as a Vampire ‘cuz I feel like I’ve been here before and in particular, I must have been “bitten” and “turned” sometime after the Civil War. I’m kidding of course, but it’d be hella cool if it were true. My ability to put words on a page with a fast-paced and new-age feel makes my scripts interesting. I’m always thinking about where we are in the story and always try to have rise-and-fall to keep my reader filled with “curiosity.” Enough curiosity in a script can make something a page-turner!

Before we go, is there anything else you can share with us?
My office is on The Lot Studios in WEHO.

My hubby and I have a garage full (five to be exact) of 60s Vintage Italian Vespa & Lambretta Scooters.

I still am into the Rudeboy scene and ride my scooters several days a week.

I’m coming up on twenty years with my hubby Scott A. Campbell. We were married six years ago on October 26, 2015 on our 14th anniversary — it will be our 20th year next month.

We have two beautiful puppies: Malibu and Venice. 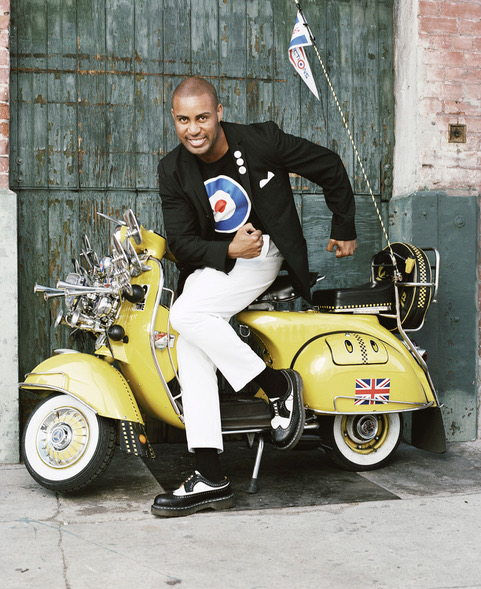 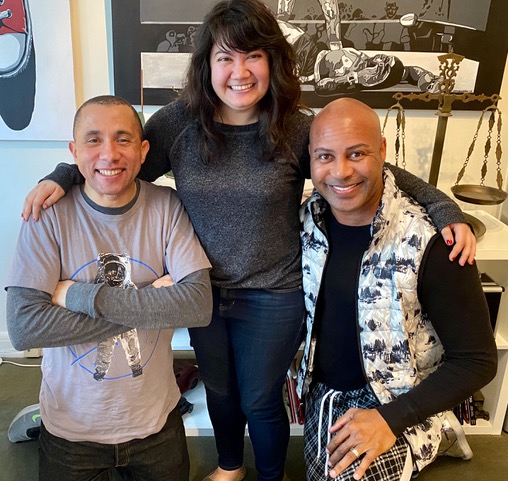 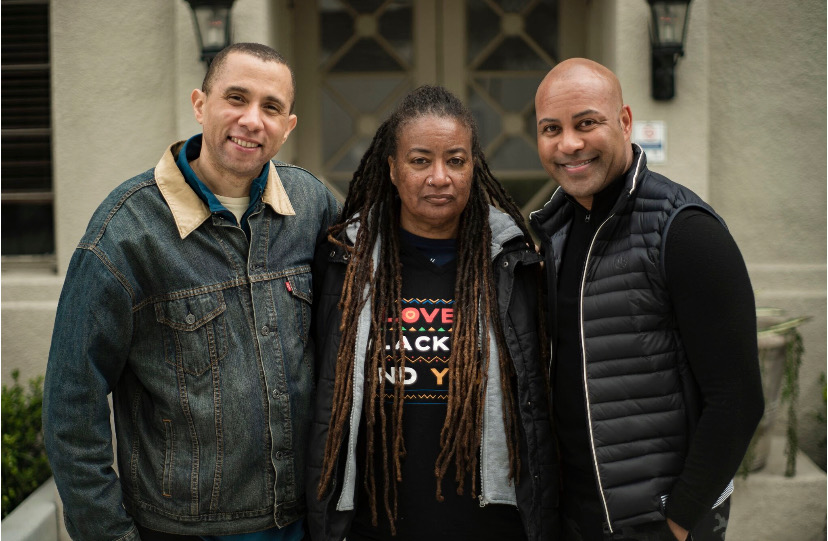 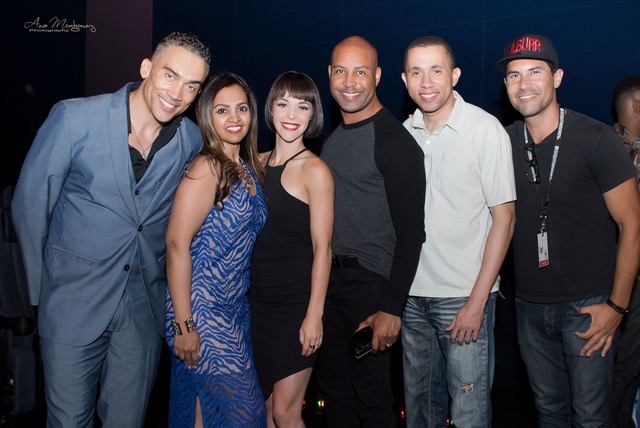 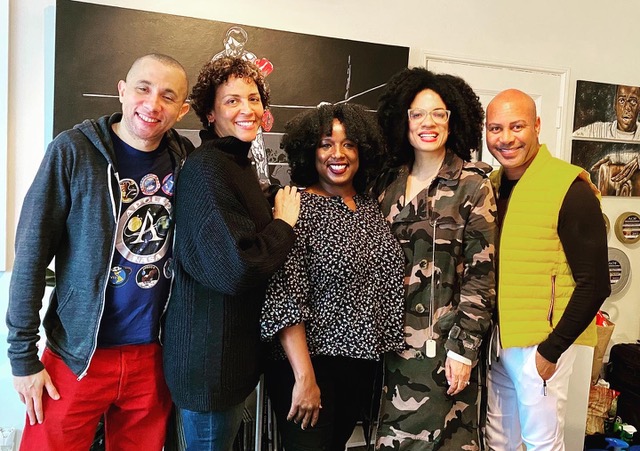 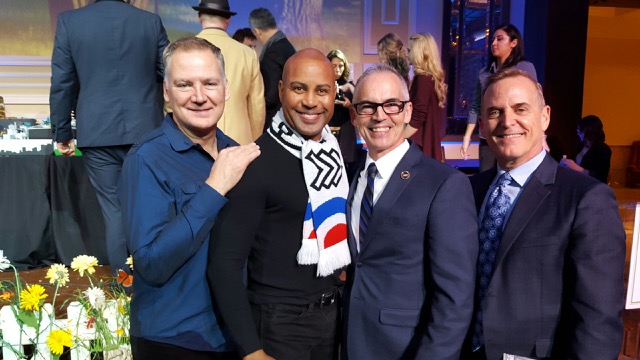