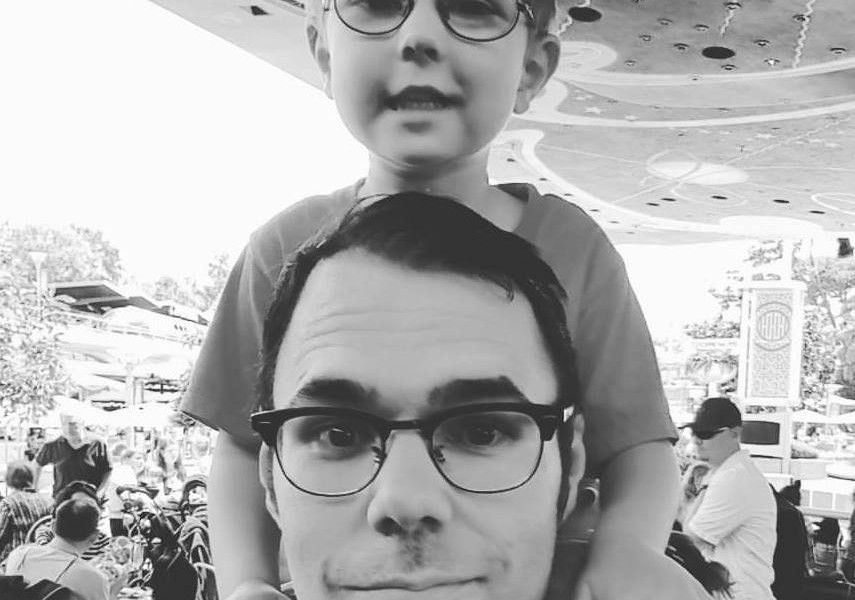 Today we’d like to introduce you to George Ricciardella.

George, please share your story with us. How did you get to where you are today?
I didn’t get into art school. I’ve been drawing since I was 6 and just kept doing it. I moved from New Jersey to Los Angeles in 2003, having never been here before. It became home quickly. The people. The mood. The heart of Los Angeles speaks to artists. It always has. I worked professionally in film and television for a decade and then the two things happened to me that essentially draws a line across the path of my life. I had a son and I got sober. Both were life altering and one was, sadly, a lot easier done than the other. Things got dark with my addiction for a while and something had to change. So, I changed. With the help of a few like-minded people, I continue to change. Something else changed too: my purpose as an artist. Nowadays, for me, I try to use my art to help people. Whether that’s exorcising something within myself that others can relate to, or providing candid and honest experience as a father, an addict and a human being. It’s lead to, what I consider, some of the best work of my life. I keep a post it above my desk that says: “Funny. Touching. Honest” It’s what I strive for in my work now and most aspects of my life. Looking back, I’d say I could not have had a more ideal past and really look forward to what’s to come.

Has it been a smooth road?
There are the typical problems and bumps that I believe every artist faces at some point: money (or lack thereof), the want for notoriety, personal satisfaction and the like. These were present, and still are, typically depending on my own level of insecurity. For me, the biggest obstacle were the self-imposed ones. The decisions I’d make that were easier at the time or the bridge I’d burn in favor of a shiny new one that appeared. Things like that are, again, common factors in the life of lots of people that come to LA to (on some level) “make it”. As stated before, I’m an addict in recovery. I’ve been sober since November 12, 2013. Before that though, there was a stretch of years in which I paid no service to my art and only to my addiction. These were some of the dark times I eluded to. Times in which I started becoming a hollowed out version of myself. I truly believe that each of those times was necessary to get me to where I am now, and I like the hell out of where I am now.

Another huge bump in the road was the acceptance that, as a father, the priority of how I spend my time or even how much of that free time exists is going to change. And it has, dramatically. However, it’s also provided me with a new perspective on things. Being a father has provided me with a joy that enables me to see my life as much broader than I used to. Some of my bigger projects have been put on hold, but I no longer feel this hurried nature to living that I once did. I will have the time for everything.

So, what’s next? Any big plans?
I don’t feel as old as I once did. I think I lived a lot of my earlier life with this idea that I’m gonna have to get things done quickly or else. I don’t feel that way anymore. Right now, primarily I’m a father. We are expecting our second son in a few months, after losing a daughter at birth nearly a year ago.

I’ve got ambitions, and certainly dreams. I see a book in the not too distant future, collecting some of my experience as a father and an artist. I’ve got comic book concepts I’ve self-published before, that I’d like to take a more professional route with this time. I’m not seeking top of the mountain happiness anymore. I’m pretty satisfied with being content while also staying creative.

Let’s go backward a bit – can you tell us about the most trying time in your career?
In 2012 I had self-published a comic called The Pine Box. I was touring conventions up and down the west coast and doing well. Interest was generated and I was getting calls and booking meetings. Then I found out my wife was pregnant and I put the brakes on everything. Not only that, but my drinking increased exponentially. I had checked out. Rather than embracing change, I had decided that my professional life was over. That my creative life was over, and therefore my LIFE was over.

It took me a few years of doing things the way I wanted to before I could see through the fog. Eventually I knew that I was standing still and everyone else was growing and moving on. It scared me enough to ask for help. Since getting that help, my art has never been better. I’ve never been better.

What about “Wow-moments” – any moments that stick out? Any moments when you felt like you had made it?
These moments usually come in the kind words of strangers that have seen my work. Typically, I can provide a level of self-comfort about my art but when some one says to me: “That was amazing” or relates a story in which something I wrote helped them….that’s when I feel like I’m right where I need to be, doing what I’m supposed to be doing. Those are amazing moments. It’s like the veil gets lifted and I can see “The Plan”, or at least a piece of it.