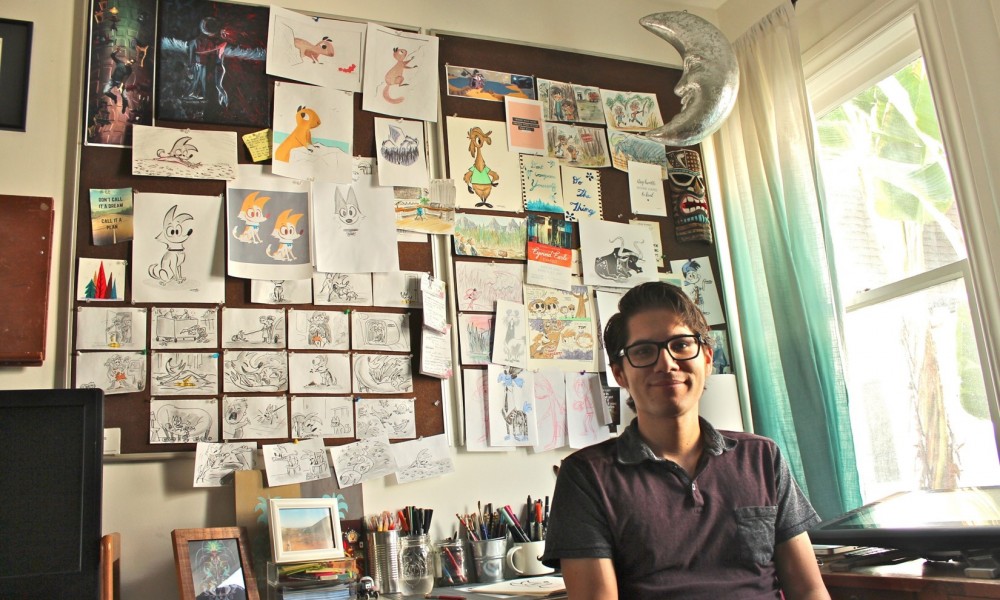 Today we’d like to introduce you to Ricardo De Los Angeles.

Ricardo, please share your story with us. How did you get to where you are today?
I was born in Los Angeles and raised up the coast in Lompoc, California, a beautiful little town where I spent my early childhood years drawing and obsessing over Disney animated films. One day, I saw the making of ‘The Lion King’ and I thought, “People draw these movies!? I want to do that!” I was about 10 years old when I specifically decided I wanted to be a Disney Animator.

That led me to CalArts. While there, I picked up a love for caricature drawing. One summer between school, my Pops encouraged me to put my education to work and make some money for myself. ‘You should draw caricatures at the Swap-Meet, ” he suggested. “Uh, Pops, no one goes to the swap meet to buy caricatures.” I seriously doubted myself and was worried I wouldn’t get any customers. Lo and behold, it was a success. $50 for five hours! Woot! Who knew? people liked getting their picture drawn while shopping thrifty! I was charging very low when I started out, but in later years I raised my rates as I gained more experience. At the end of my senior year at CalArts, I was turned down for animation internship at Disney. This was my dream. Now, what? I stayed home for about a year and a half to catch my breath from school, work on my art, and spend time with my parents and siblings. Then my student loan creditors started callin’ and the stress jumpstarted me into action. A few Craigslist searches later, I landed a job at the L.A. Zoo drawing caricatures, so I drove from Lompoc to L.A. on the weekends and crashed on a friend’s couch. Around that same time, a friend who was interning at Disney Consumer Products gave me a tour and mentioned an internship opening up. I was hesitant, again doubting I had a chance, but eventually said yes, and she forwarded my name. This time around, I got in. Those seven months I grew a lot; I was on my own, eventually got off my friend’s couch and got a room in Echo Park, networked at Disney, and developed my skills and confidence.

Post Disney internship, I couldn’t find consistent work to sustain myself. I went broke, so I regrettably moved back with my parents. I felt like a failure at first but with their encouragement and support, I saw it as a fresh start. I Craigslist searched again and got a job doing caricature promotions on Samsung’s Galaxy note phone on weekends at the Beverly Hills Mall. I moved back to L.A., this time staying in Pasadena on another friend’s couch. A few weeks into this gig, I landed a job with an ad agency in L.A. as an Illustrator. For 2 months I drew Monday – Friday at the ad agency, and Saturday & Sunday I drew caricatures on a phone. Let’s just say I needed ice on my shoulders most days. It was worth it, though, because I saved enough money to move into a room in Alhambra, where I lived for the next 3 years.

After those jobs, I became more intentional with my art and career. I did a lot of odd art jobs, you could say, like logos, character designs, some animation, some freelance for Disney Consumer Products, and of course, caricature gigs. Caricatures was my primary source of income at this time, which I loved because it allowed me to travel to Los Angeles’ diverse locations and venues, and got to draw for a living. In 2012, I went to the International Society of Caricature Artists convention. For one week, about a hundred caricature artists gather in one big ballroom and draw each other. Then, they post their work on a wall and compete in different categories. I never intended to win anything, I just went because it was a new experience and wanted to be inspired by everyone’s talent. I thank Robert, the owner of the caricature booth at the L.A. Zoo, who recommended I go at least once. I developed my love for black and white ink drawing. I ended up traveling with some friends I made to the East Coast for a few weeks, drawing caricatures from Fair to Fair. I got to see parts of the country that I would never have dreamed of. During the tour, I made the connection correlation between caricature and character design. When I drew caricatures, I was in essence, designing a character on the spot. At that point, I had decided that I would pursue character design in the animation industry and beyond.

When I got back, I was contacted for a job as animator at a video game company in Santa Clarita. I spent five months there I until I was contacted by the creative VP at Disney Consumer Products, asking me if I was still in L.A. and interested in a character artist position. I couldn’t believe it! To be honest, I said no at first, because I didn’t feel right quitting my current job for another job(a first for me). To my family and girlfriend’s disbelief, they patiently convinced me of all the pros of taking the Disney job. In the end, reason won! It was a good decision. I resigned from the game animator job as professionally as possible and they were totally encouraging about my future prospects.

I’ve been at Disney for two and a half years now, and have done character art for the Disney Stores, which include properties like ‘The Good Dinosaur’, ‘Zootopia’ and ‘Moana.’ My time there has flown by, which to me means I’m kept pretty busy, but I like that. I get to work on creative projects with super talented people. I’m constantly experimenting and looking into past Disney art for inspiration and study, and try to live up to what’s come before while also having my own voice. It’s always exciting to see art I worked on, sitting on a shelf at the Disney Store. I can’t believe it sometimes.

I’m creatively restless, so I have to be doing something new every now in then or I’ll get bored and stagnant, which is why personal projects are great! Currently, my wife and I are developing a children’s book about our dogs and too many others to name. I’ll also be starting an online art store soon and am trying to get out to art conventions and gallery shows and be involved in the creative community.

Has it been a smooth road?
One of the biggest obstacles was my debilitating self-doubt. Thoughts like, “I’m not good enough,” or “I don’t deserve that job,” persisted in my mind. At CalArts, being surrounded by massive talent on a daily basis, intimidated me as much as it inspired me. I compared myself too often and even today, I will go thru spells of self-doubt. I’m grateful to have friends and family that will encourage me and motivate me and inspire me. Taking breaks and spending quality time with family helps me to recharge and get perspective, My wife is a big motivator, her being a creative herself. We motivate and challenge each other to do good work and to pursue our goals.

Aside from struggling to have a steady income over the years, keeping up with my skills and staying competitive was really hard. I couldn’t stop drawing if I wanted to get the kinds of jobs I wanted, and I don’t ever want to stop. Art is a life long journey and I’m so glad I get to be on it!

What is the most difficult part of what you do?
Hmm..,.to not become complacent in my art and work. This requires constant drawing practice, experimenting, and growing in areas that need growth. I try to have personal projects outside of my day job that fulfills another part of me artistically. When I’m in ruts, I seek inspiration in art books, podcasts, or go sketch at a coffee shop with my wife Lisa. Or doing something that requires no drawing, like hiking, traveling or watch a new movie or show. My brain needs
variety or else it will get bored and complacent, and that will pour into my work.

And also staying organized! That’s an eternal struggle for me haha. Luckily my wife Lisa is a well-tuned organizational machine, so she helps me out a lot!

What are you striving for, what criteria or markers have you set as indicators of success?
I’m constantly having an internal debate about this! I’ve tried to focus on my goals at hand, crossing them off my list, and moving on to the next.

In terms of art and storytelling: Listening to that creative urge and not suppressing it. Another is connecting with an audience through my work. When they have an emotional connection to it, it’s a wonderful moment. But overall, keeping your word, achieving goals, staying diligent, growing personally and creatively, and being kind to people are markers I strive for. Who knows, I may add more to the list!

So, what should we be on the lookout for, what’s next in store for you?
At the moment I’m being pro-active about participating at art conventions (CTN Animation Expo, ComicCon, etc.) and getting my art out there and meeting new people. My wife Lisa has been really encouraging, she is the best, by the way, just super supportive. I’m going to be in an upcoming show at the Awesome Coffee Shop L.A. November 11 at 8pm. It’s coffee-themed art, which I think is rad cause I love both!

Lisa and I are juggling ideas for children’s books and picture books. One of our ideas is the story of how we came to adopt our dogs, told through their perspective. I’m also developing a picture book about my adventures in Yosemite.

Lastly, I’m in the process of opening up an online art shop and sell prints, books and perhaps other merch like fun art mugs and stationary in the future. I’m also itching to get back into making animation videos and have considered teaching to share with others. I’m really excited for the future and continuing to a live creative life, cheesy I know, but I love being an artist!