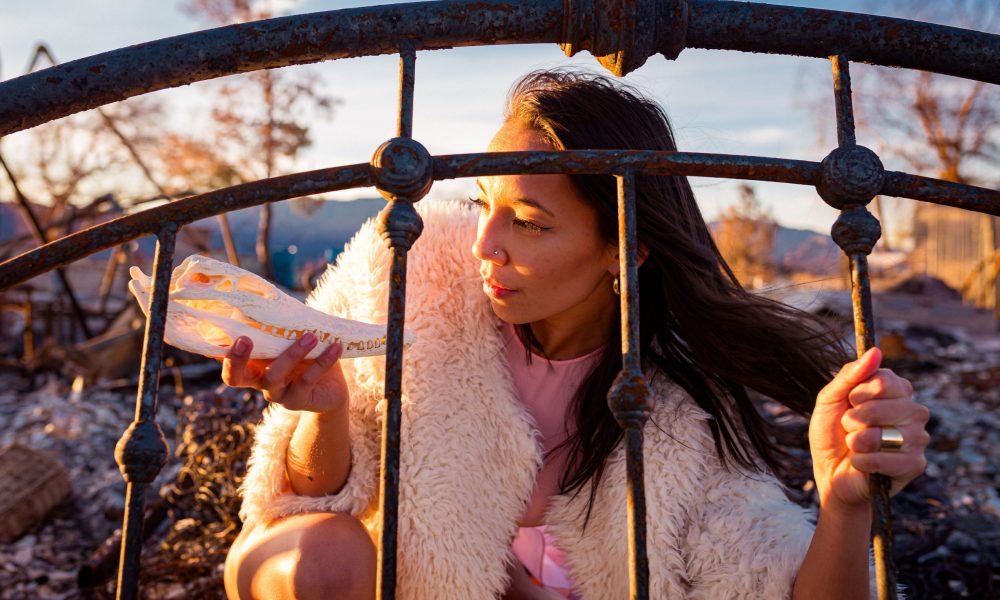 Today we’d like to introduce you to Frankie Tan.

Frankie, let’s start with your story. We’d love to hear how you got started and how the journey has been so far.
I began dancing before I could walk, and begged my mom for ballet lessons pretty much as soon as I knew what they were. So in some ways, I started then when I was three. But I began dancing professionally as a teenager- I was paid to do a few productions when I was 14 or 15 and got a trainee contract with Los Angeles Ballet when I was 17, but a few months in I was badly injured and in a boot for six months. I didn’t know anything outside of the ballet world at the time- everything I’d done to prepare me for adult life was under the assumption I’d be a professional ballerina. I really thought I’d never dance again. I went home to the Bay Area and was partying a lot, raving, and writing a lot. I lived in Barcelona for a little while and wrote about everything I experienced there, working in nightlife and hanging out with a bunch of ex-pats. I was incredibly smart and thought I might pivot into writing, but I missed moving my body and slowly got back into yoga, then ballet class again. I auditioned for a bunch of companies but didn’t make it, and then at the last audition of the season, I was accepted on scholarship to Alonzo King Lines Ballet’s trainee program.

At the time, I still had to work full time to pay for food and housing while I was at Lines, even though I was also in school dancing seven to nine hours a day. I’d become deeply enamored with electronic music and underground nightlife, and I worked Wednesday through Sunday as a gogo dancer at clubs all over San Francisco. On the weekends, I taught ballet in the mornings, then would often dance at day parties in the Castro (the queer district of SF) and nights at clubs & concerts, then after-hours till 5am. I started getting contracts to perform at music & art festivals as well, and I realized there was a whole world that had never seen ballet before. Sometimes I’d freestyle, gogo-style, but what I really loved was the creative license, the ability to make and perform whatever I wanted. I’d never had that freedom before. My first festival was Lightning in a Bottle, and my friend Auberon, who I knew from Supperclub, had brought me on to perform pointe in her circusy stage show. I had people coming up to me afterward saying they’d always wanted to see a real ballerina but had never had the chance, and I thought, this is what I want to do. Classical ballet has such barriers to entry around class, race, etc., not only with its dancers but with the audience too, and I saw festivals as a way to bridge that gap and create accessibility. I kept that in mind as I finished my two and half year program at Lines, but as I struggled in the last couple of months before graduation, I was diagnosed with PTSD.

After I graduated, I began teaching full time and continued working all the clubs in SF. I started doing more specialized performances, less gogo and a little more choreography, I did pointe for the Tutu Tuesday party, and got more invested in the festival world. My fusion burlesque troupe, the Mothers of Pearl, was creating tons of choreo in different genres; dancehall, burlesque, heels, contemporary. We featured with a few local bands, including our dear friends Planet Booty, and toured to a ton of festivals together. I also won a grant from HerForest, Electric Forest’s program empowering women & nonbinary artists, and went to EF by myself to showcase a contemporary ballet piece I’d choreographed. I connected deeply with Karolina Lux and her band Sepiatonic (who I’d already met while on tour with MOP) while I was there, as well as the Poetry Brothel, New York Poetry Society’s immersive literary & performance art cabaret. Sepiatonic invited me to tour with them, and I created a special pointe burlesque piece for their circus show- I did a ton of other choreo as well, and int he process learned bellydancing from Karolina Lux, pioneer of the NeoBellydance style. I broke my tailbone onstage on that tour but it was totally worth it!

I started traveling to LA to work- doing different gigs here and there and eventually moved here after I was invited to live in an enormous artist warehouse. I’d been training aerial, which I learned as one of our cross-training classes at Lines, and I was able to have a rig in my new warehouse and train all the time. I reconnected with the Poetry Brothel in Los Angeles (although they have chapters all over the world), and became a resident & touring “poetry of the flesh” (dance & aerial) performer with them. It was a fantastic opportunity to make deeply moving and meaningful burlesque pieces, I made new work for every show- I created pieces about my relationship to religion, my experience of gender, sexual assault, my breakup, a ballet-burlesque spoof on the Nutcracker, even a piece where I wore a dress made of CVS receipts to comment on consumerism. It became a way to heal myself and understand my trauma, and I started calling it post-burlesque: moving past just the art of tease and into the artistry of vulnerability. Burlesque is such a great medium to address heady topics; they can become really fun and palatable, or you can make them sultry and give them weight. I started revisiting writing as well, I’d written masses of poetry in my time away from dance, and the Poetry Brothel reminded me how much I love it. I recently started reading for the Brothel as a poet as well as performing as a dancer.

I continued working in nightlife here in LA, as well as event entertainment in general. I joined gender fluid drag-burlesque troupe QWN (Quintessential Wonder Nasty) and began clowning with the Fungineers, and I got excited about the opportunity to perform aerial more seriously. I realized a dream of working with the Ultra Angels, the dancers of Ultra Music Festival, and performed in Miami with them as an aerialist- I’d never been so high in the air before and it was awesome! I was traveling and performing almost every week, and I started getting more interested in the production side of things- at this point, I’d managed a few different performance troupes, and worked in sound design a bit as well. I knew I had the skills to create and lead, and I love how live events bring people together and allow people to be receptive to others’ experiences. I had a couple of opportunities to produce different events last year, including my wonderful friend Madam Gandhi’s 30th birthday party, and I realized this was the ultimate way to not only create a platform for my own voice but to uplift other artists and give them a space to be heard as well.

I created Freemaidens, a femme-centered arts collective, to provide a platform for radically vulnerable visual & performance art. I reached out to nine femme and female artists that I admired and asked them if they wanted to make a piece for my show. They were mostly performers, but all different mediums: dance, painting, burlesque, drag, multimedia projection & theatrical movement. I gave them the prompt: How do we as femmes feel bound/constrained? What are the ways we are holding ourselves back? How do we disempower other women, and how can we contribute to their freedom? The pieces they created were powerful, thoughtful, riveting, and unfailingly vulnerable. We held it at the warehouse and our team totally transformed the space; it became an immersive show with a storyline, where each performer had their own area, and the audience traveled through the space or pivoted to face each performance as the show went on.

It was then that I realized the real mission of my work: examining the function of trauma in interpersonal experience, and creating art that heals the artist & the audience simultaneously. I’m dedicated to that mission. Since shelter in place started, I’ve created new work and performed it online, most recently a piece in honour of Asian American Heritage Month, and I dance on my rooftop (to the delight of my neighbors) every single day. I write and perform poetry, for the Poetry Brothel and PSNY, as well as various online open mics, and I’m working on a redaction poetry project for exhibition. I was also invited to make a sculptural mask for a gallery exhibition in Austin, and even though sculpture isn’t typically my medium, I created a beautiful piece out of live flowers and resin, and entered my first gallery show! I’m brainstorming another Freemaidens show as well.

We’re always bombarded by how great it is to pursue your passion, etc – but we’ve spoken with enough people to know that it’s not always easy. Overall, would you say things have been easy for you?
There have been a lot of challenges- from my first serious injury to having to work full-time while in dance school full-time, to understanding and working through PTSD and its related traumas. I think that all of these things, though, not only made me stronger but informed my work and my mission. Healing and accessibility are both so important to me in my work, and those ideas have definitely been reinforced by the struggles I faced.

We’d love to hear more about your work and what you are currently focused on. What else should we know?
I am primarily a dancer/aerial dancer & choreographer, but what sets me apart is the unapologetic vulnerability that I put into my work. I don’t shy away from difficult or tender topics, or even dress them up too much when I create art around them. I think I’ve embodied so many different mediums and styles, but I am really proud that I ask the difficult questions, and do it in a way that’s still compassionate and takes care of the audience, as well as the performers. Often as a performer when I was asked to “go there”, there wasn’t a lot of thought given to how that might affect me after the show, revisiting something traumatic or challenging. I try to be patient and kind with myself and artists and still find that raw authenticity with them.

Has luck played a meaningful role in your life and business?
I don’t think luck has played a role. I don’t really think about luck, things just happen, and you decide what to do from there. That’s the excitement of creation. 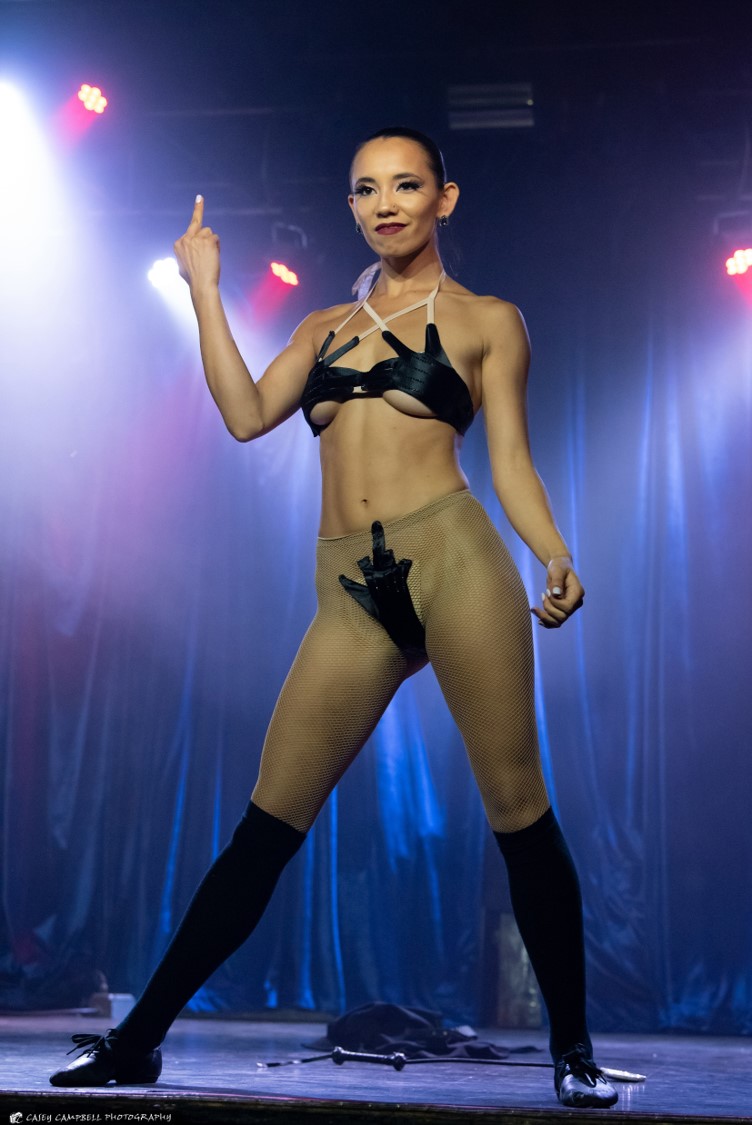 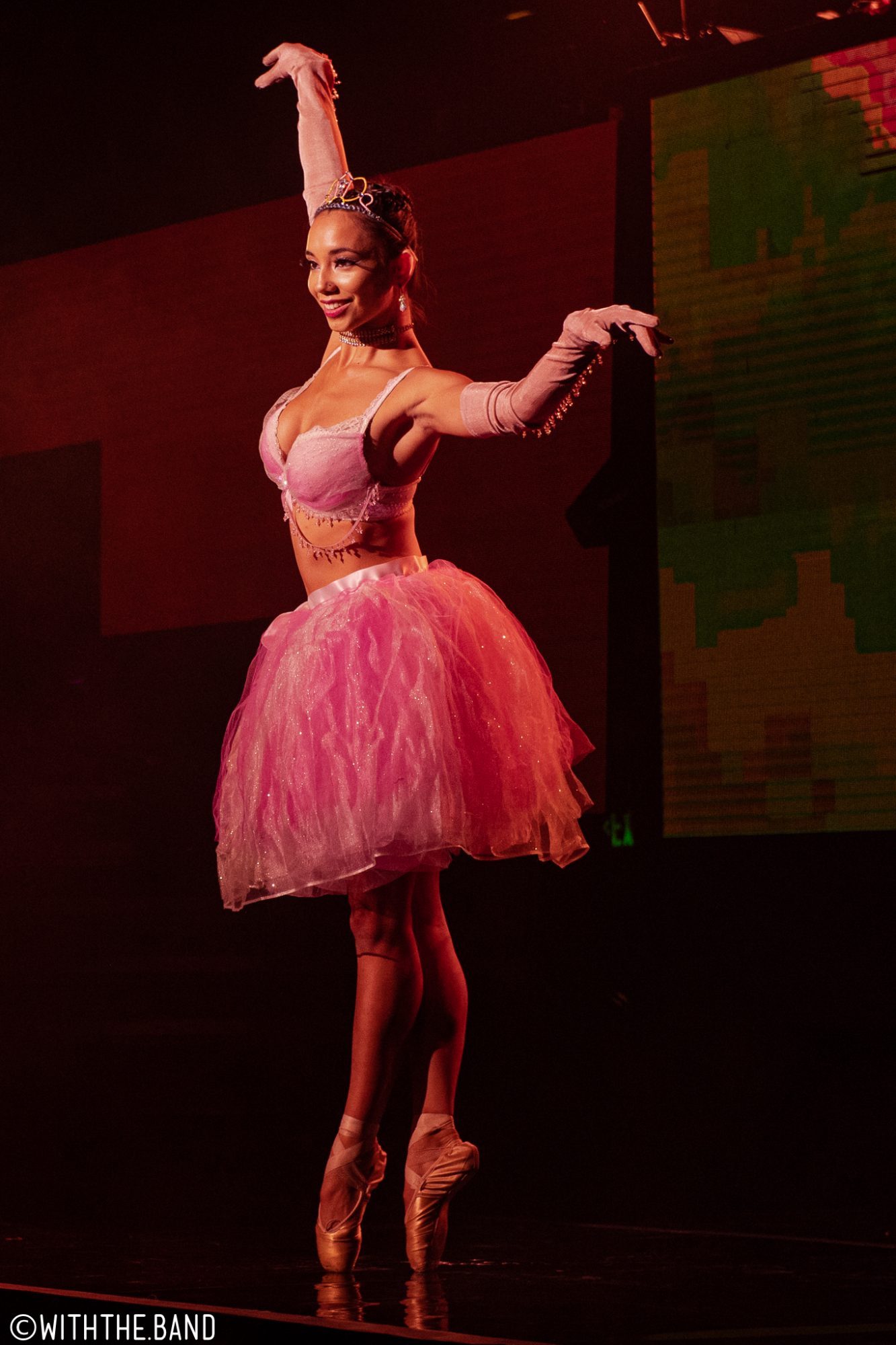 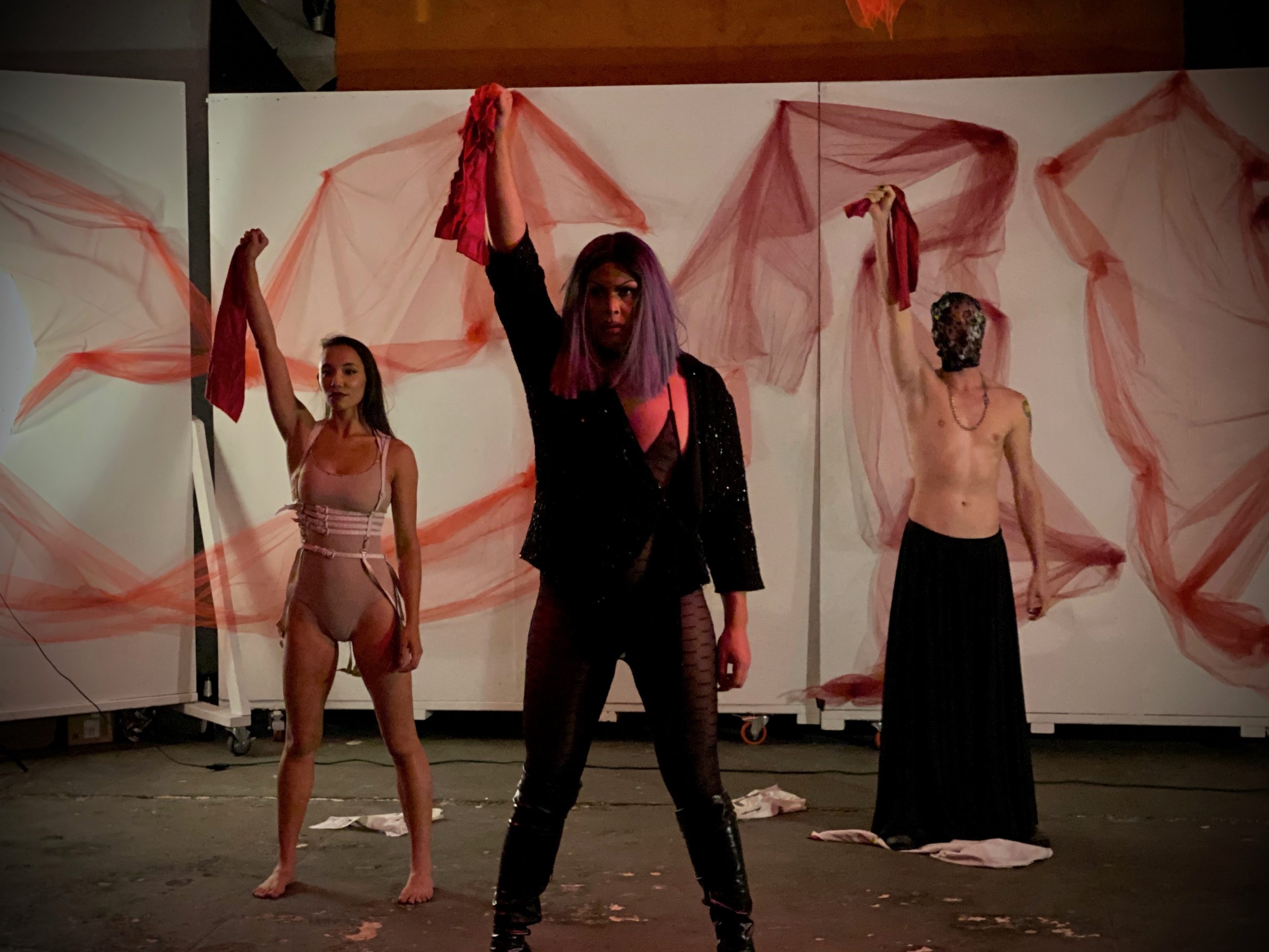 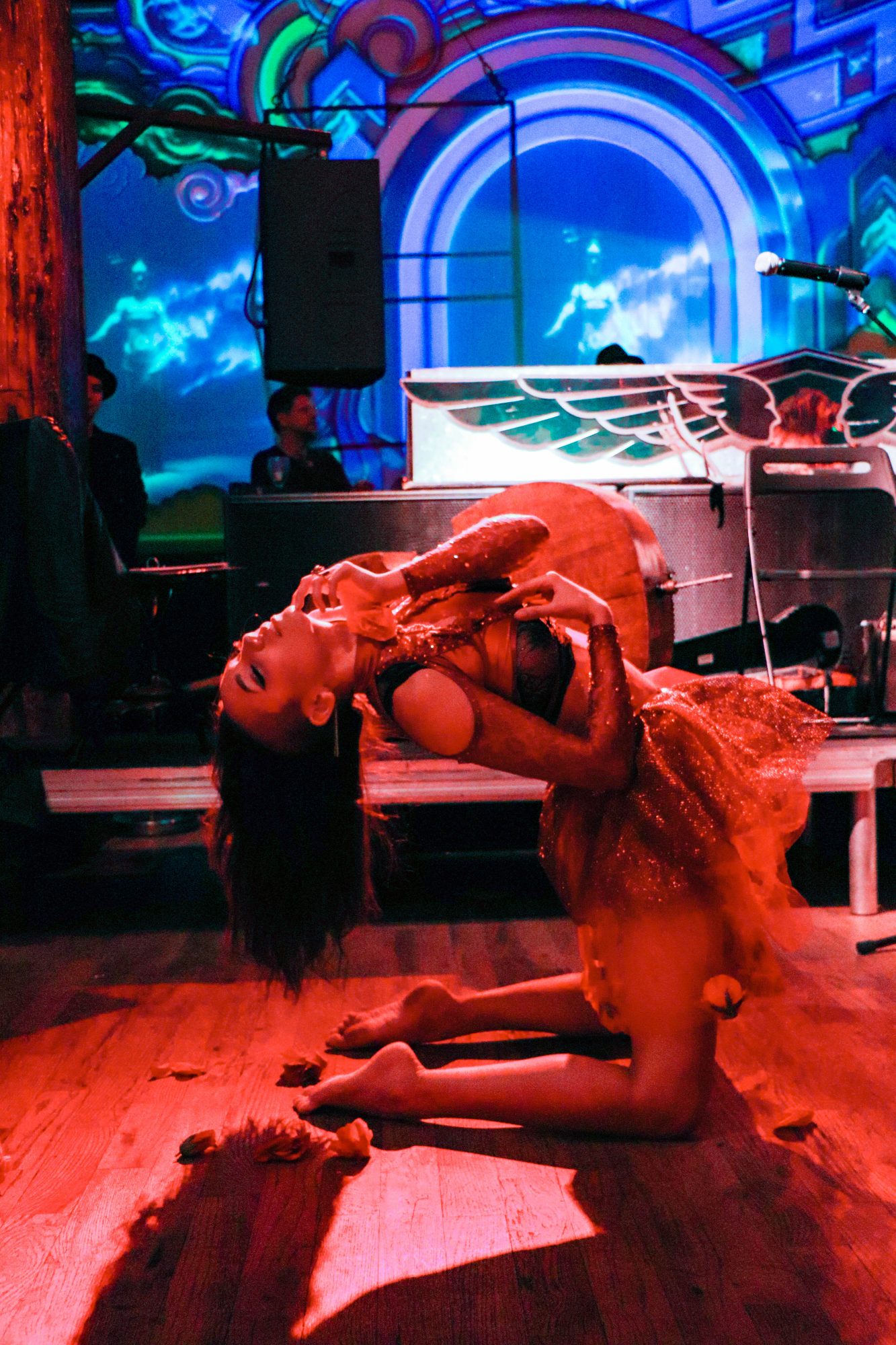 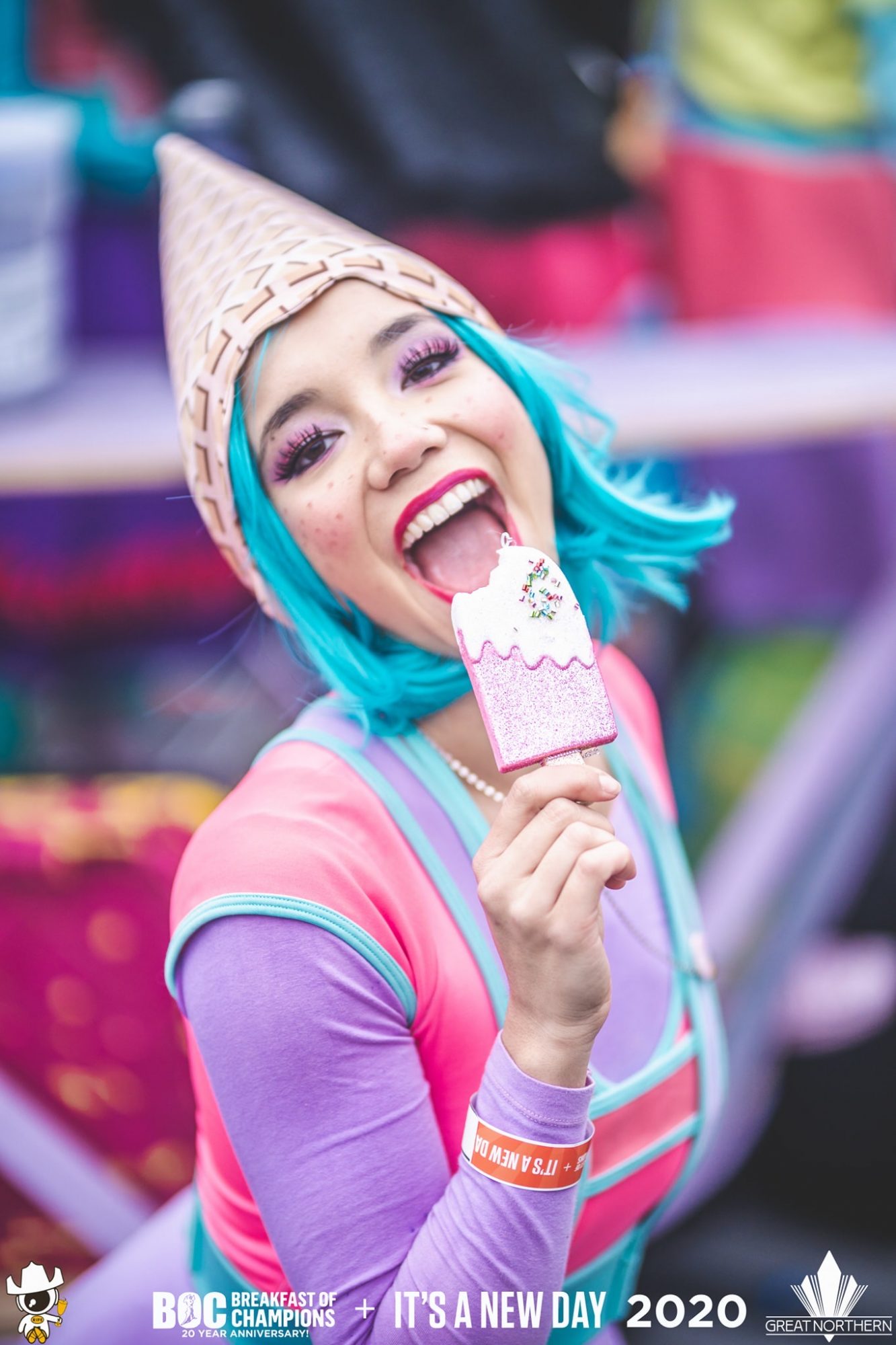 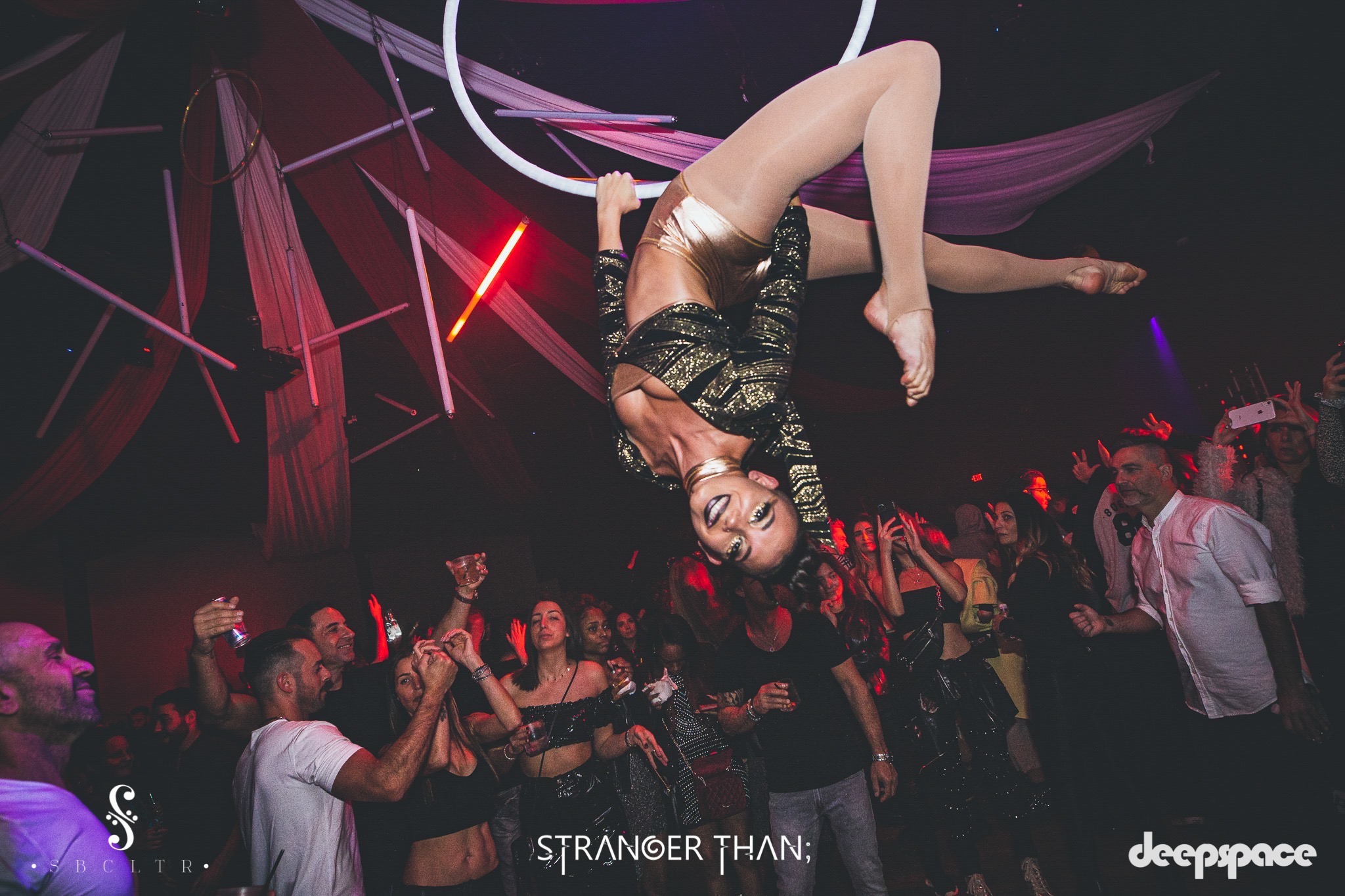 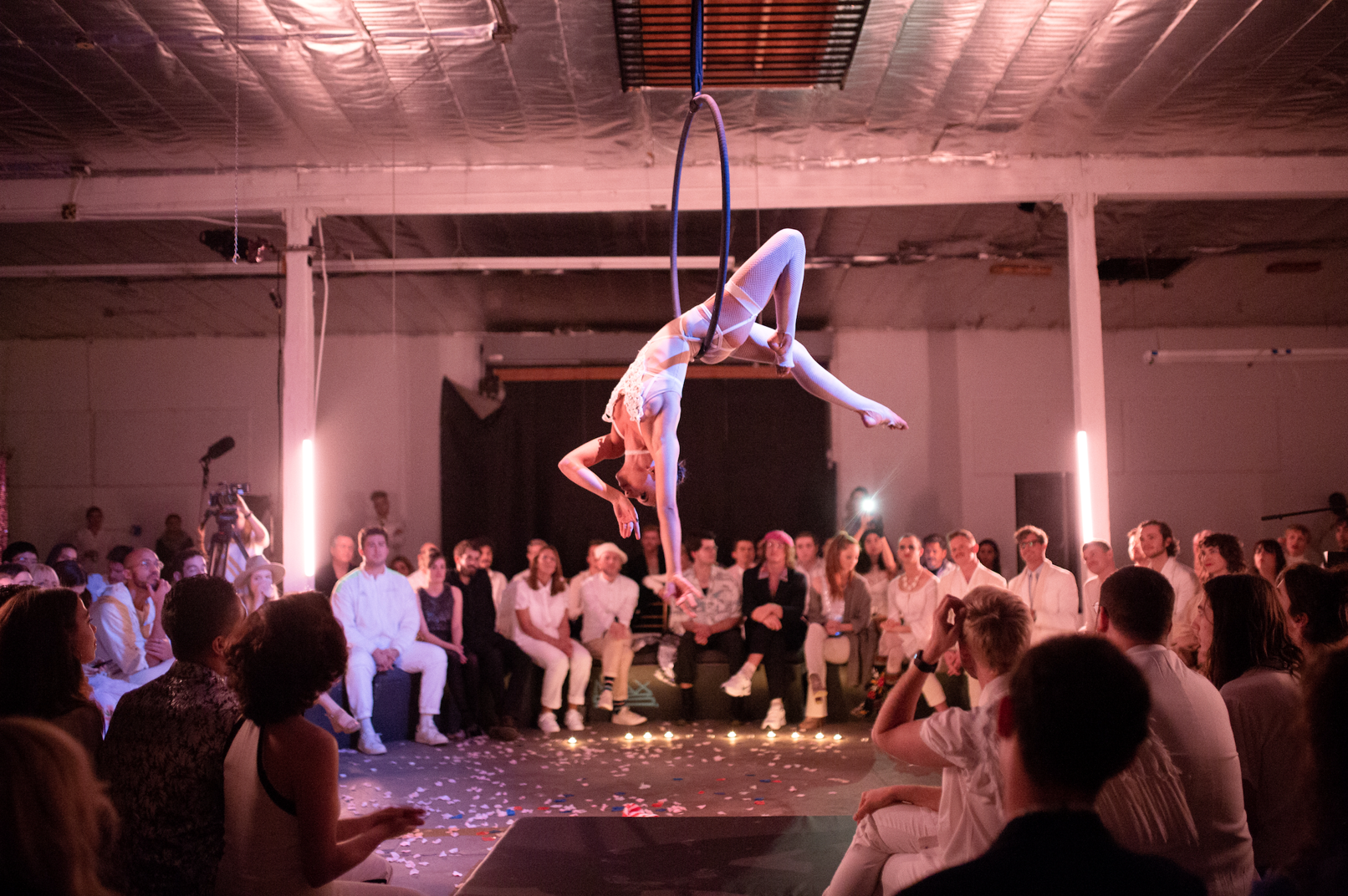 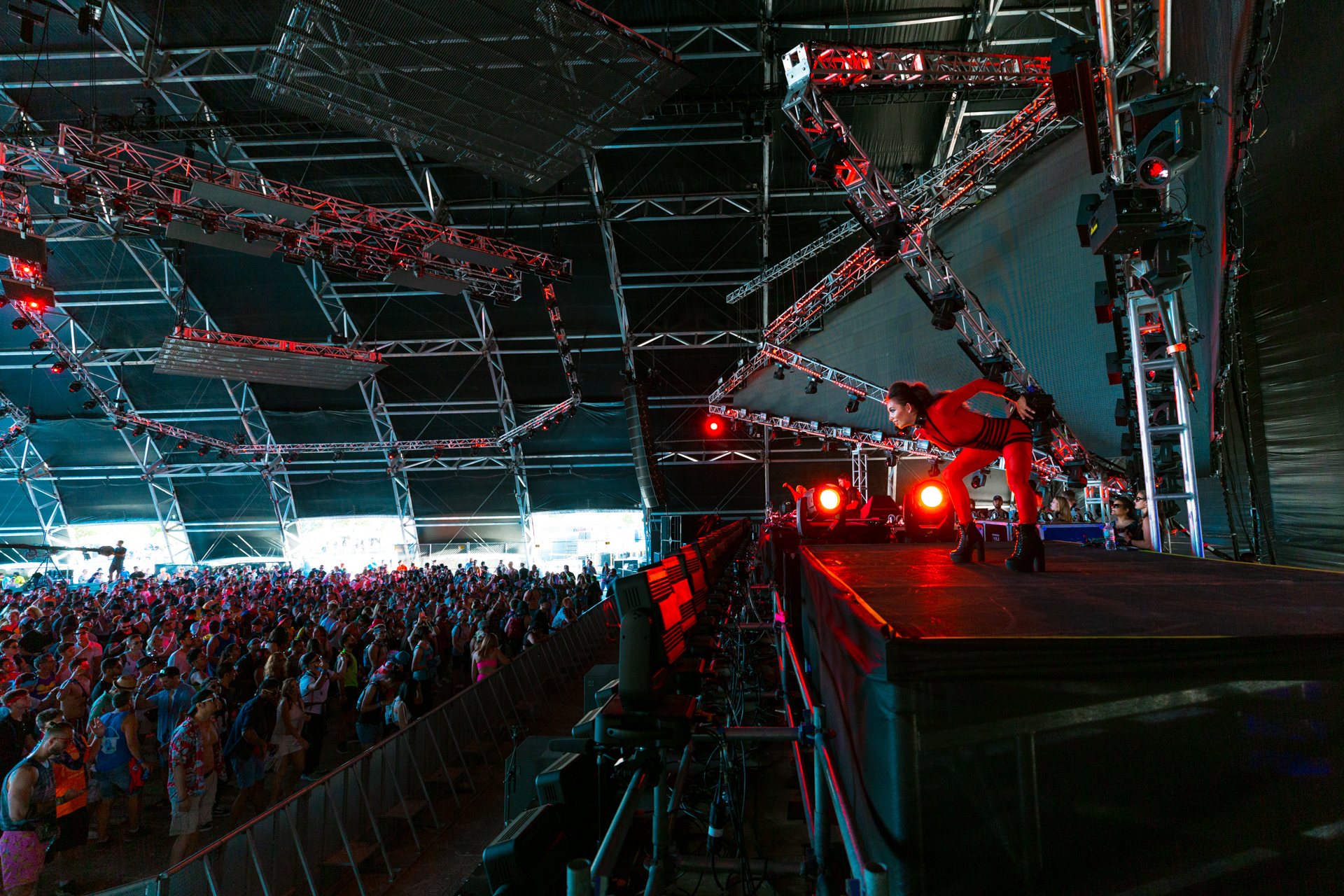