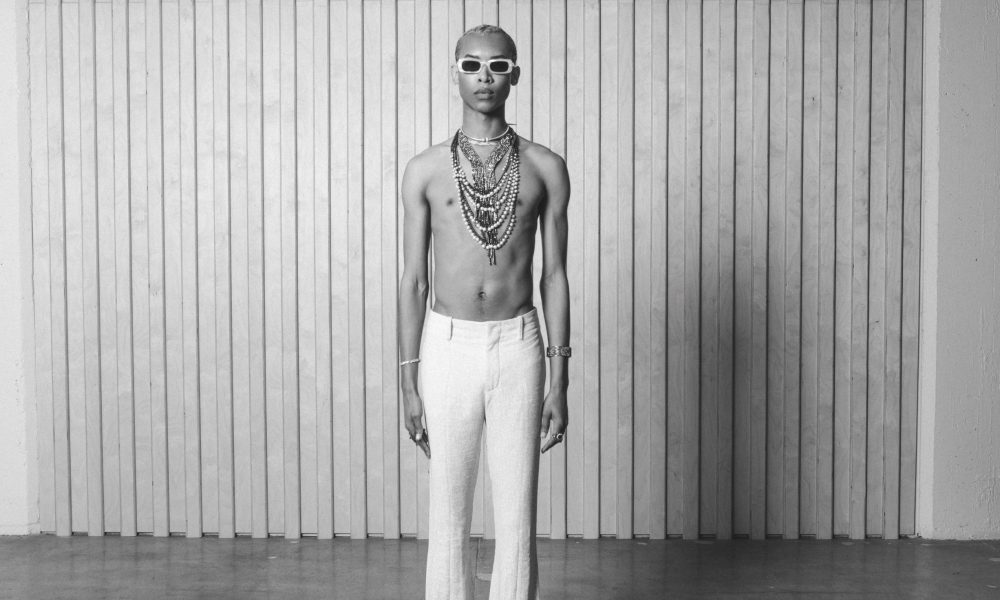 Today we’d like to introduce you to Ferrick Moore.

Hi Ferrick, can you start by introducing yourself? We’d love to learn more about how you got to where you are today?
It’s honestly a lot but briefly without telling you all my business, it all started when I went to college, starting in 2017. Hopefully, that “went” doesn’t confuse anyone now, I am still in school; unfortunately (I didn’t do all them damn years to stop but quite frankly, I am over it and I just want my degree). I am sure I can speak for most that college was definitely a significant stepping stone to where I’m at now. The passion, the drive and the “me” would of probably took a little longer to bloom if it wasn’t for the next chapter to my life….he course I learned a lot about myself and my true passions, along with my set goals of life.

Born and raised in Sacramento, California, I couldn’t wait to get “out”. I just knew I wanted something different, lively, warm and kinda spontaneous like me. I ended up going to my second choice, a university located in Southern California in the big OC (Orange County); specifically Irvine. I don’t want to give up the name of the school yet just because I don’t owe that institution anything till I get my degree. Plus, I don’t want those “school is life, end all, be all, that’s success all” students to make their trauma-induced, icebreaker neurons to quiver when they hear about where I go because it really doesn’t matter to anyone but me. Again, I just wanted to escape my hometown to something new and something I can unravel myself in. At the time, I thought I was making the best decision for myself and today, more than ever, I am starting to realize it was, and in the most corniest way, my destiny. I haven’t felt this happy to just be myself and see so many others so open-minded and ready to try new things, experimenting with life. My start at school, I was never in Irvine physically during my freshman year. Literally, on move-in day my oldest sister, Kiyah, who I reconnected with once I moved to SoCal took me to San Diego and I couldn’t have felt more alive.

My major at the time was Biological Sciences in pursuit of becoming a Diagnostic Radiologist. Like, that is still the goal but I am confident to say I only see the older version of myself doing that; with salt and pepper hair, a little more wiser, has seen the world in my youth. That’s what I see for myself in the future. Because when the years went on and on, from my campus to the streets, going back and fourth on the 405 to Malibu to San Diego, I fell deeper and deeper in love with LA and also modeling. Creating art is one thing but also being that one crucial piece of telling a story in a fragmented snapshot of raw, transparent film. People would always ask me what I wanted to do but I would give them the rehearsed version so they would mind their business, but as soon as people I never met before started asking me if I was a model, a switch flipped. I’ve always in the back of my mind had an interest in photography for one but also taking pictures. Looking back at it now, there was only one lingering reason why I didn’t want to try to get into modeling. Back in high school, this one amateur school photographer had told me she wouldn’t take picture of me because she didn’t think I was worth taking a picture of. Whew! that hurt the hell out my feelings and I took that with me for a while. Until again, people would ask me all the time did I model?

My friend Karra, I would never forget, had then introduced me to the Lightworks Society in Orange County. Now, this was October 2019 I believe and the Lightworks Society would have these huge meet ups with photographers and models to kind of meet, network and practice on each other. That was my first time really ever, really stepping and working my face up in front of professional digital cameras. Absolutely, zero experience and honestly just winging most of it. It was so cool though, there were people of all experience levels to types of markets each individual was from. It was truly a safe learning environment for everyone to just create and that was my start as a model.

Fast-forward to the next year or the closing of that year, I guess (honestly, I don’t have that much of a good recollection of time because things just happened so fast along with Covid making an irreversible impact on your lives today but I’ll get into that later) Many of those same photographers from the meets ended up asking me to participate in collaborations with them on their own personal pieces which was very exciting. Again, we were all learning and still getting the hang of our own skills but being able to be in a small more intimate environment for personal (I don’t know if that’s the best word) but their own projects is magical. The vision that these photographers have that now I had to encompass and try to invoke was a test but a test I finally was forth-willingly wanted to take! Passion is definitely the word for what I was feeling on certain sets or where ever I would shoot at with these photographers.

I continued to sharpen my skills and connect with different photographers but at the time, I didn’t expect as much recognition from again, these random people asking me if I modeled or not. I started to do more research to even have a better answer for these people that would ask me’ “Yes, I am a freelance model looking to later become signed to then work editorial and runway in the primary focus of androgynous, gender fluid, feminine clothing.” I know what I want at this point but a few events happen in my life that just made me feel like nothing was worth it anymore.

The biggest snowball effect to why I felt like I was knock off track was when my great aunt passed away in December 2020. I never really lost anyone let alone anyone close to me as family till she passed. There are three women in this world I absolutely owe my life to in this world and that’s my mom, my grandma and my Aunty Dot. That confidence that alludes from my photos now is because of her. The reason I don’t let anyone but myself define me is because of her because at the end of the day, and she told me this, “…Nobody knows me better than I do!”

So due to a lot of emotional stress and mourning of my aunt, I took a break from some projects but not all. I definitely had more to prove and narrowed my focus to what I thought would make me proud as well as my aunt. The only thing is, I was also still in school while all this was going on and let me not forget to mention, I was five to six hours from my family at the time while in the tight mist of the pandemic where everything was on lockdown. I started to steer away from schoolwork because it was becoming a little unbearable. If that wasn’t bad enough, I was struggling a lot financially and my dorm-style, on campus/off-campus (technically) apartment was infested with gnats. I personally felt like I was being tormented. I knew what I wanted for a very long time and as soon as I built my own pathway towards it, someone starts picking up the stepping stones behind me, I felt completely lost. At this point, things were getting a bit unbearable and the city of Irvine; just the location itself wasn’t helpful for its lack of diversity and scarceness of inspiration, I turned to moving to LA permanently.

I set to move to LA and things were definitely up in the beginning. I thought I found the perfect roommate, I had some projects set aside and planned out once I actually moved there and things were at least better because I was utilizing our campuses therapy trial sessions at school (shout out to my Black therapist!). But you know, obvious things don’t get easy if you’re really living. The perfect roommate thing fell through and I needed to find housing urgently. Luckily, I was able to find something pretty quick yet temporary. Again, emphasis of the temporary because the last thing I know, I was back in my hometown of Sacramento having my family members tell me I did not fail because I am back home. But nothing anyone could say could make me feel like I didn’t take a lifetime or two-step back from my purpose.

Only a week went by and I got my butt on the Amtrak and moved in with my best-friend from high school in Oakland, CA in pursuit of continuing my networking and building my portfolio and creating while stacking enough to move back to LA. A day could not pass without me missing where I loved to be most and most people couldn’t understand why I b*tch and moaned about not being in LA. I grew up a second time in LA. I learned so much and being in the sun and only being a drive away from the beach was something I couldn’t honestly live without. So I continued to keep my headed down and do what I was supposed to do to get back to where I once was, I am back in LA now and so grateful for all the friends and family that let me know what I was doing for me was valid and supportive. I just moved in on April 1st but I have projects planned later and many goals to unlock. I totally understand things happen for a reason and I will be the reason I shine better than ever. Because I know me.

We all face challenges, but looking back would you describe it as a relatively smooth road?
Quickly, from top to bottom; my great aunt passing, school, housing insecurities, worse breakup ever (LA’s Black gay dating scene is a mess).

Appreciate you sharing that. What else should we know about what you do?
I currently a freelance model as of right now but my goal is to soon be signed with a major agency or at least be scouted to diverge into the editorial and runway industry of modeling for mediums that subject androgynous, gender fluid, feminine fashion.

I specialize in breaking boundaries in the fashion world and making my own path to creating on the degree that means the most to me.

I am most proud of Kingsey Gbadegesin posting a photo I did with Malik Dupree in Queens, NY. It was the recognition I felt like I deserved.

We’d love to hear about any fond memories you have from when you were growing up?
I am blessed to say I have a lot. One thing my parents did was made sure I had a cute lil childhood. But my favorite would have to be going out to eat at the Rainforest Cafe with my mom and eating off her plate because I never ate off the kid’s menu. He would always have me try new foods and different places with her. So did my dad but it’s all about the gurls! 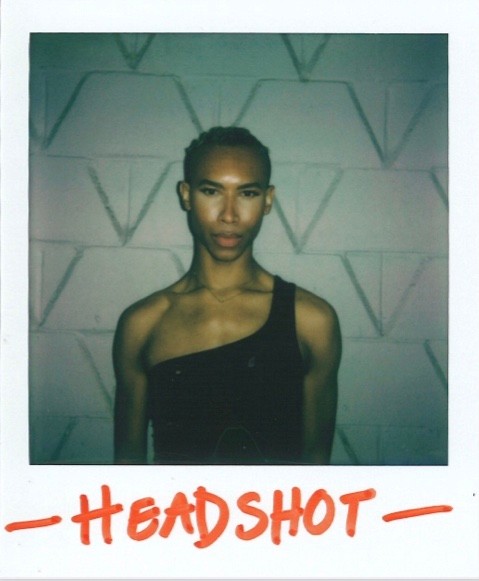 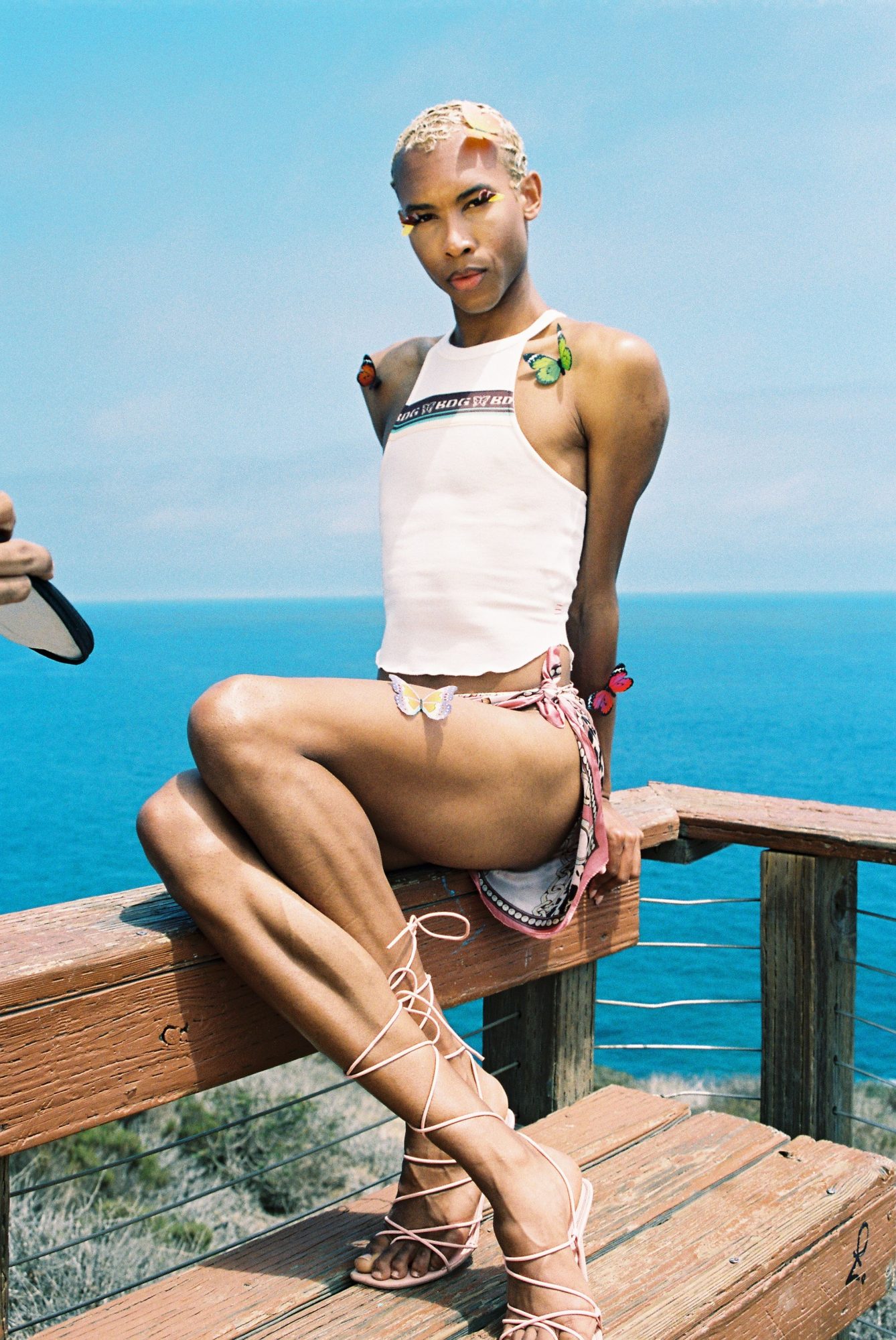 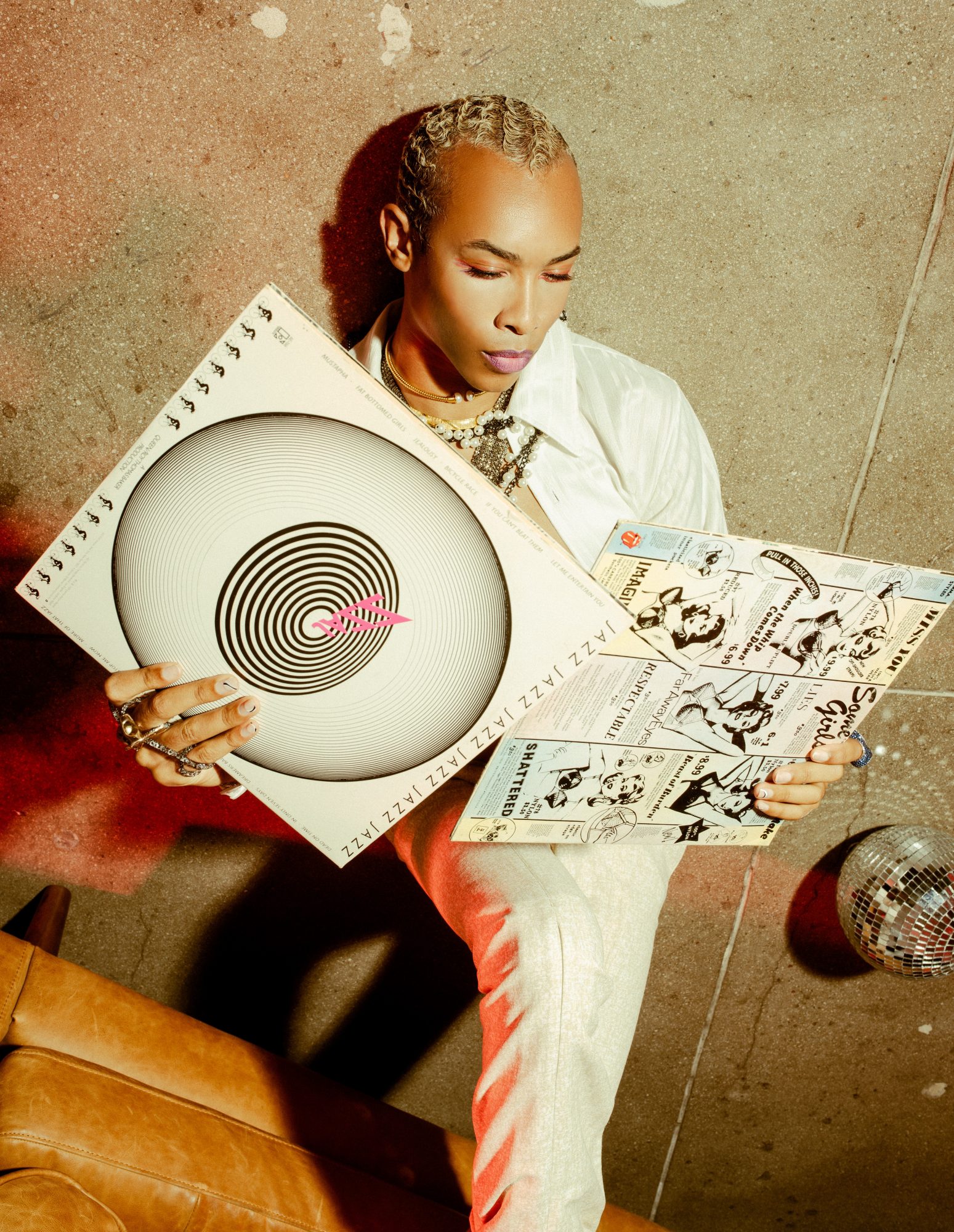 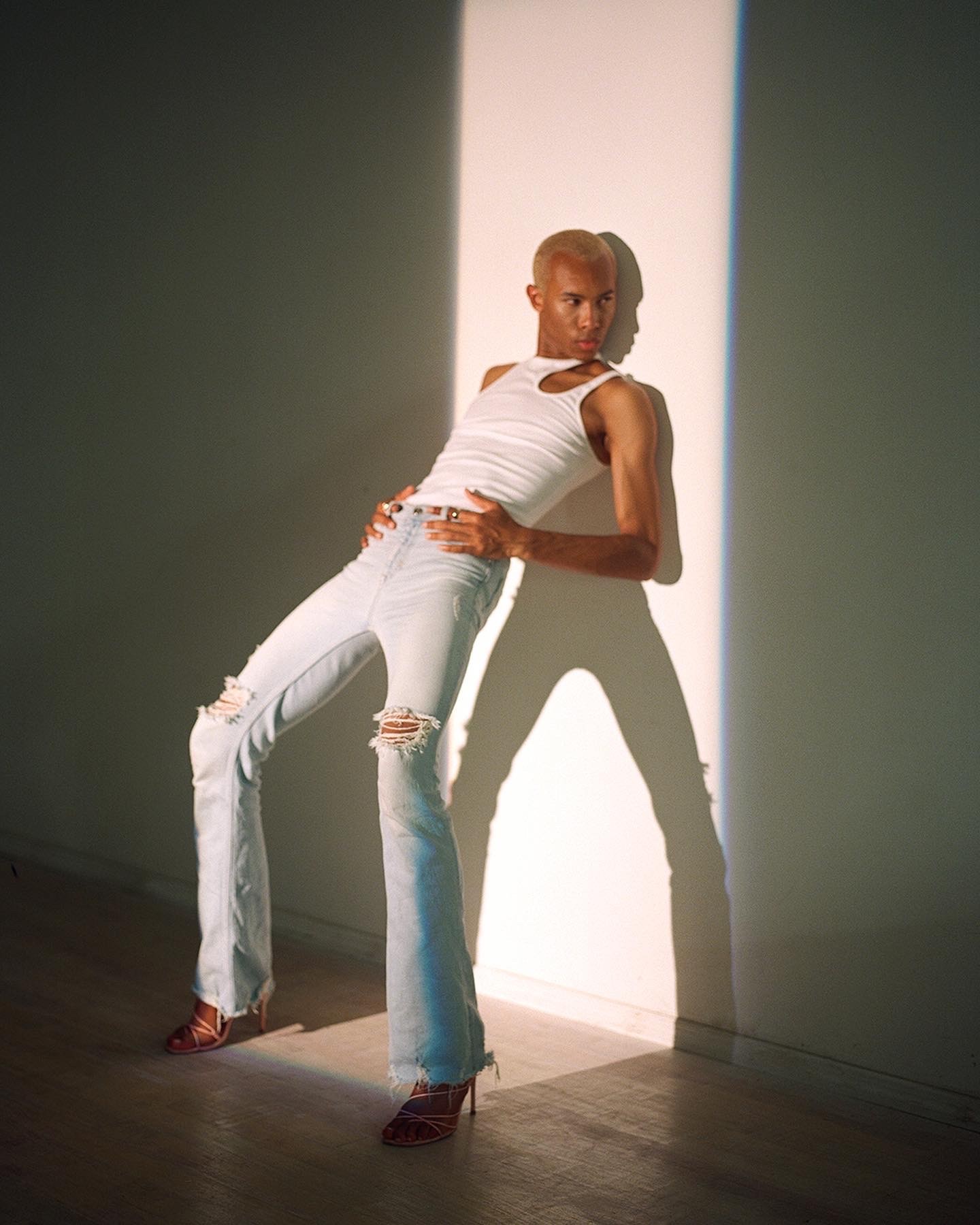