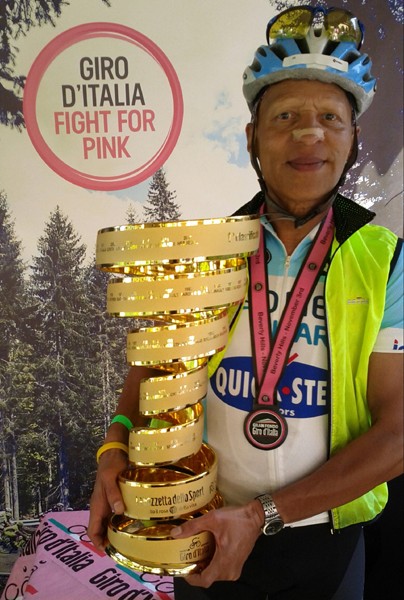 Today we’d like to introduce you to Sam Strain.  Below you’ll find edited excerpts of our interview with Sam.

Can you briefly walk us through your story – how you started and how you got to where you are today.

I was badly injured. 3 major surgeries. Got fat. Hated life. Gave up. Boring. The past was the past. I took hold of the future and started riding a bicycle. Rode the L.A Marathon 17 times in a row. Bought a bike, then another, and then another. I used to amateur GS race skiing and that was pretty cool so the whole speed thing got my attention. I bought faster road bikes and started training. I started going to the gym almost every day and started putting in some real effort to make myself faster. The gym offered me a job to become a personal trainer and the rest is a story too long to tell.

Smooth, rough, who cares. It’s the now that matters. Fitness and the fit life is a struggle unto itself. It’s a one sided relationship and you have to do all the work. You have to bring high quality, make sacrifices, do the work, be dedicated, consistent and THEN reap the rewards. You back off the work and fitness will back off of you. With growth, there is always struggle, but the victories, which are very few are well worth it all.

I’m in the process of changing my body fat %.  On July 16th of last year I had surgery for a double hernia.  I was not allowed to work out or ride my bike for months.  It’s been a year and I’m just getting back to the bike on a regular basis.  I gained some fat weight and my % went up to 22%.  I plan on taking it back down to 10%.  I plan on doing this in one month.

In 1995 I was involved in a horrible accident and almost lost my left hand.  After several surgeries I still have the hand but only have 60% use out of it.  Depressed, I gave up on life.  Wouldn’t talk to anyone and did not want to be seen by anyone.  My only new friend was the pizza delivery man.  My neighbor’s wife came over one day after not seeing me for quite a while and said she would not leave until I let her in.  She’s very persistent.  I would not open the door, but she would not go away.  My hand was swollen like a puffer fish and was a hideous color with pins sticking out of it.  Finally after her continuous knocking I finally opened the door a little bit and she forced her way in.

I was a mess.  I couldn’t even take a bath without help.  Another friend/neighbor’s wife would come by now and then to help me bathe and would shop for healthy food and do stuff but I told her to stop coming.  Anyway, the neighbor that forced her way in demanded that I come over for dinner when she saw the pizza box’s stacked up.  We argued as I told her I wasn’t coming and to please leave as I did not want any sympathy or help.  She wouldn’t leave and I gave in.  I cleaned up as best I could and went over to get it over with.  During the meal I noticed a bike that was leaning against the wall, and I asked her husband who was riding it, and he said no one.

I don’t know why, but I asked them could I borrow it and they said yes.  I tried riding it, but it was difficult with one hand, and it caused a lot of pain in my injured hand.  I looked at the bike for quite a while and was determined to ride it pain or no pain.  That bike saved my emotional life.  It took months for me to be able to ride around the block one time, and then one night while doing therapy I saw a commercial about the L.A. Marathon bike ride and that was it.  I now had a challenge and purpose to pour my efforts into.  In the past I had played amateur tennis and ski raced so I needed something like this desperately.  I called a friend and asked him to ride with me and the rest is history.

I went back to the gym and started working harder in therapy as the left hand was still a problem.  I couldn’t use it on the bike without a lot of pain and discomfort.  When the time came for the ride I was ready.  I had rehabbed my hand so I could get some use out of it, the pins were removed, the swelling had gone down, the pain was still there, but off I went.  I did the ride and it went well as I finished it and did not crash.  I bought the bike from my neighbors and kept riding.  I bought another bike and started riding/racing with my new bike friends.  I bought another bike that was more race profile.  Two years ago I did my first century (100 miles) ride.  I now have another full race bike that a client gave me.  As a result of my time and dedication in the gym I decided I needed another challenge so I did the Body for Life contest.  I started skiing again.  Then one day while at the gym, the general manager asked me if I wanted a job as a personal trainer.  I said no thanks, and it turned into a running joke.  Every day I went in he asked me again, and again, and again, and finally one day I said okay I’ll give it a try.

I worked for Bally’s for 5 years and became a top level elite trainer.  I needed more growth so I left and became independent.  I’m 14 years into it now and hope to continue to develop my craft.  Thanks to everyone that helped me and believed in my when I doubted myself.  Now I help others and nurture their belief in themselves.