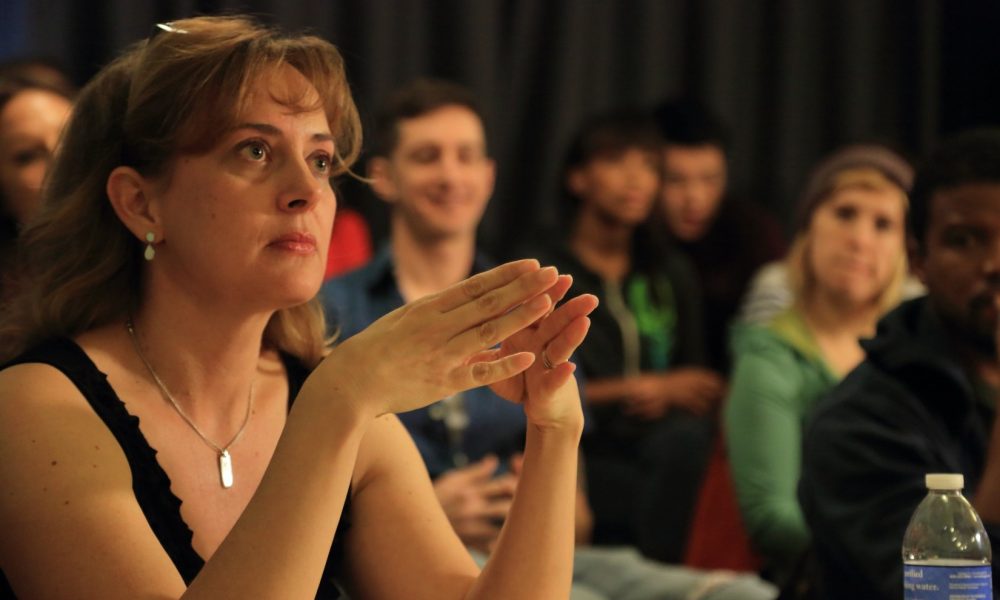 Today we’d like to introduce you to Elizabeth Mestnik.

So, before we jump into specific questions about the business, why don’t you give us some details about you and your story.
I had been acting since I was a child. At the age of 18, I went to Meadows School of the Arts to get my BFA in Acting. While I was there, one of our guest instructors, Eve Roberts came back from a Meisner Technique Workshop in New York City with Bill Esper. She raved about it – about how even after working as a professional actress for 30+ years, she said it profoundly changed her sense of truth and expanded her range – even now. That stuck with me, so after I graduated and worked as a professional actor for a few years…I decided there were still parts of my training that were missing. I wasn’t completely confident in my process. I still felt that often I was doing all the work, but still crossing my fingers hoping that the muse would strike. So, I found out that Bill Esper was now the head of Acting at Rutgers University’s Mason Gross School of the Arts. I flew to Chicago to audition for him, got accepted and in the Fall of 1992 packed up my Chevy Spectrum and drove from Denver to New Brunswick New Jersey to start my 3 year MFA program. I fell in love with the technique – with the feeling of really working out the creative muscles and getting into “actor shape”.

While I was at Rutgers I was fortunate enough to be invited to teach as well, I taught speech for the actor, acting and even theatre history… and this is when I discovered my love for guiding others in this work. I truly never envisioned becoming an acting teacher or opening my own studio. But I did enjoy the teaching I did at Rutgers, and I knew I was good at it.

After graduating – I moved into New York City, started hitting the pavement like all other aspiring actors do. What started to happen was that I started coaching actors on the side. My manager would often refer other clients to me to prepare them for auditions, so between my acting jobs I started teaching more and more. By the time, I moved to Los Angeles in 1999 my career had me moving more towards directing and teaching than acting. My first directing job out here was directing Ed Asner and Fred Savage in a new play called Wendell and Ben at the old Tiffany Theatre on Sunset Blvd. What a thrill to work with such seasoned actors (though this was Fred’s first play), and I realized I really did love helping actors actualize the characters, clarify the story and develop their instruments.

I began teaching acting at Chapman University and directing some of their plays while at the same time teaching for an independent studio who hired me to develop their Meisner Technique Program. After about a year at this studio, I realized that I really couldn’t continue to teach this technique under their business model. See, the Meisner Technique requires pretty small classes so that every student gets enough time with the exercises. I was finding myself frustrated when the students weren’t growing because the class had too many students – sometimes as many as 26 or 27 in a 3 hours’ class. I kept finding myself going over time just to get the students the hands-on work. When the director of the studio gave me a stop watch and told me that each student would get 6 minutes – I just knew – I couldn’t teach there anymore. About a month after I left, one of the students contacted me, asking for me to come back, but I knew that wasn’t an option.

Another month went by – I was still driving 40 miles one way to Orange for my Chapman University classes, and that same student called again saying that he had 12 students who wanted to continue the Meisner work with me, and that they had found a space to do it.

Thus, The Elizabeth Mestnik Acting Studio was born LOL. That was in February of 2001. 1 teacher, 12 students in a rented space on Santa Monica Blvd. I left my university job and 16 years later we still have small classes – just a lot more of them. It was a big leap of faith in a city with many very established acting studios, but I thought the New York style training I offered would be attractive to some of the actors out here. There were many times in those early years where I fretted over getting enough students to sustain a class. Especially a long-term class like our Meisner program which takes 9 months to complete. My first year offering a full Meisner program I started with 12 students and 6 graduated. But every time I thought about giving up I could not think of something that I would rather do or anything I was more suited to. I knew I was good at this and my students really encouraged me to keep going. Every year we grew a little more and I would ask the theater where I rented space for more and more time to offer classes. Eventually in 2006 they offered me a space to have all to myself – freeing me up to teach and coach whenever I wanted… and that is when we really took off.

Our studio really grew up in Hollywood – moving from Santa Monica Blvd to Melrose in 2011 – and past year we moved to the Studio City/North Hollywood area so that we could add an extra classroom and enjoy the luxury of a parking lot! Now I have 7 other faculty members – with the core of the school based on traditional Meisner Technique classes, but we have also developed a Beginning Technique Series for people who want to seriously explore acting but are not ready for the intense challenge or commitment of our 2-Year Professional Meisner Training Program. We have Scene Study for more seasoned actors, Shakespeare, On-Camera Technique, Voice, Speech and just added Musical Theatre to the schedule. So, we went from that one class of 12 meeting 2 times a week – to 8 different classes being held weekly.

We’re always bombarded by how great it is to pursue your passion, etc. – but we’ve spoken with enough people to know that it’s not always easy. Overall, would you say things have been easy for you?
I trained and had experience as an actress, director and teacher. So, for me the hardest thing was learning the business side of things. I call myself a reluctant business woman. Fortunately, my business grew slowly over time so I could afford to “learn as I went.” For me the hardest part is staying on top of promoting my school. The internet, and search engine optimization… how to make sure people know about the school when there are so many schools to choose from. This was particularly hard when I was the new kid on the block – trying to promote what we had to offer in the face of some very long established studios. Every time I would add a new class I would worry about whether it would fill up – would I have enough students to pay my rent on the space – and if I got that – then would I have enough to make gas money. Fortunately for me word of mouth back then really helped. We eventually found that there was a desire from Los Angeles actors for a challenging New York Style of actor training…and we started to get the reputation for the place to go for serious actors. The recession also was a tough time… up until 2009 we continually grew…slowly, but there was always growth.

The recession hit us very hard…because it hit young adults very hard. Many of the jobs aspiring actors do to pay their bills and support their training suffered during those years. People stopped dining out as much – so all my students who waited tables were really struggling just to pay their rent – let alone invest in their training. Some whose parents had been helping them could no longer count on that. Entry level positions were tight, so finding any type of job was a struggle. My mantra at the time was “survive now…thrive later”. We just had to maintain where we were and fortunately our enrollment stayed steady. It just didn’t grow at the same pace it had in the past and for a few years our demographic changed. A silver lining to that time though was the number of people mid-career who unfortunately were laid off because of the recession took the time to think about what they had always wanted to do and thought “I want to take an acting class. I’ve always have been interested in this but haven’t had the time or the energy and now I do.” Our beginning classes received a great infusion of new energy and diverse experiences

We’d love to hear more about your business.
We are a professional actor training studio offering professional level training developed around The Meisner Technique. Our reputation is for producing exciting and spontaneous actors with reliable acting technique. We have been ranked L.A.’s top acting program by both CBS and Backstage and offer classes in The Meisner Technique, Voice, Speech, Shakespeare, Singing, On-Camera Acting, Commercials as well as series of Beginning Acting classes for those who are just beginning this journey.

Our faculty is top notch, and that comes not just from their incredible training and professional experience, but from their real investments in each student. One thing that sets us apart is that we are comparatively small. In all of our classes combined I think we have only about 120 students. So, we really do know our students Our instructors have very individualized relationships with each person- which can help us create the right training plan for each student. Students get an entire team of teachers when they join EMAS.

We are also a very traditional Meisner Training Program. We are very faithful to the syllabus I learned from William Esper the head teacher of Sanford Meisner’s Neighborhood Playhouse in New York City for over 14 years. We have a reputation for being tough – but supportive – and I think that is what actors need to really reach their potential and compete in this industry.

What were you like growing up?
I was a super out-going kid growing up. And I pretty much was acting since I could speak. My sister who is 10 years older than me would write little plays for me even before I entered kindergarten. I blame this all on her! But my big break was playing the bluebird with the broken wing in the elementary Christmas play. Crazily enough I still remember my song! And I never remember a time when I wasn’t performing. School plays, community theatre, show choirs, ballet recitals etc.

We were also a big sports family so when I wasn’t at a rehearsal I was probably at one of my brother’s baseball games – or at soccer practice or at a Denver Broncos game (back then we had 2 season tickets and we had to fight for our chance to go). I am still a huge Broncos fan. Just ask my students about my innumerable sports analogies.

In high school, I really dedicated myself to our drama department and knew I wanted to pursue acting full time once I graduated. I guess I was a “theater nerd”, but I didn’t feel like that. At our school a lot of the most popular kids did drama. It was a great place to be – I learned so much beyond just the craft of acting. I learned about working with others – true collaboration, I became confident in presenting myself to others and grew a deeper empathy for others by playing different characters. I also learned about losing…as we don’t always get cast in the role we want. All of those were a great foundation for me to build upon.