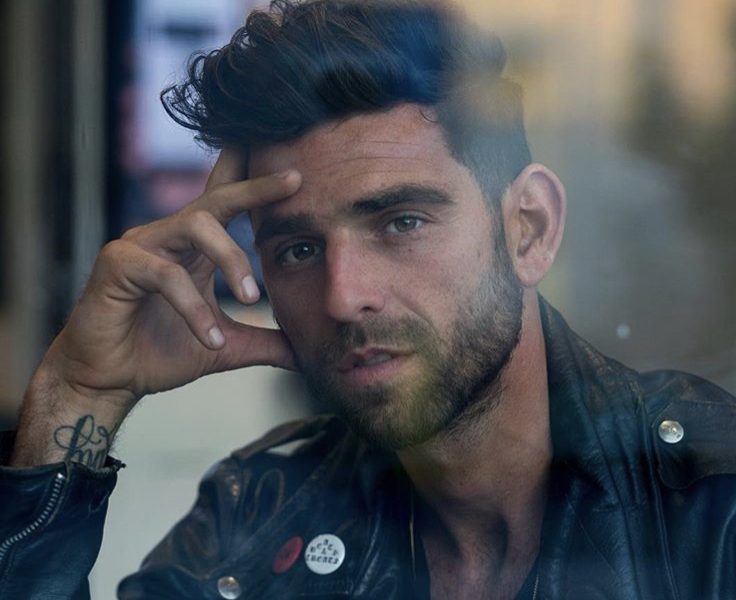 Today we’d like to introduce you to David “Kid David” Shreibman.

David, please share your story with us. How did you get to where you are today?
Growing up it was pretty hard NOT to become an artist. My mom was a Ballet and Jazz dancer and father a Pantomime. I started dancing at a very young age, at three years old impersonating Michael Jackson was a regular thing. Every day I would watch my Mom choreograph in the living room wondering If I would ever do ballet. But I wasn’t into that.

I was a jock with my mind set on being a professional Soccer Player I was in love with the sport. One day I saw the movie ” Breakin” probably on VH1 or something and saw this little kid jump out of a trash can and start spinning on his head. The kid looked probably five years old and I related to this little afro’d kid killing it. This was the first time I saw breakdancing and the seed was planted.

Over the next couple of years, I would see Breakdancing In music videos and on TV and kept seeing the movie BREAKIN on those sick days. I told my mom I wanted to BREAKDANCE and if she could help find a teacher. At the time my mom was teaching Ballet and Jazz at a number of Studios in The Bay Area. She started asking around and finally found someone teaching a Breakdancing class.

At this time I was around ten years old, and I signed up for my first Breaking class. I was still in Love with soccer with my mind set on going pro, but this dance bug was just getting started. Over the next two years, I would go to class one day a week, and I quickly showed promise and learned fast. By 13, I was already looking up local Breakdance Competitions and entered my first one in San Francisco.

This was 2003, I made it to the semi-finals and was the youngest kid by a long shot. This got me a lot of attention in the Bay Area dance scene, and it was obvious I had something going on. Over the next two years, I became more in Love with the dance. Soccer was going great, but high school was coming, and kids were getting big. At 15, getting ready to go to high school, I made the choice to stop playing soccer and go into Breaking full force.

I started practicing like a friend, everyday all day… If I was at school, I was dancing. Even at school finding time to practice whenever I could. By the end of freshman year, I was a solidified Name in the Bay area Breakdancing scene winning numerous competitions and getting the attention of Legendary San Francisco crew ” Renegades.” After joining the Renegades and getting taught and mentored by some of the worlds legendary dancers, this took me to the next level.

During this time YOUTUBE was created, and I now had a platform to share my moves with the world. I started to travel around the country saving up my money to fly myself to competitions and was winning a lot while really starting to build a name in the worldwide Breaking scene. By 2007, I was invited to compete in Paris representing the USA in a worldwide competition. We won, and I was clearly one of the standouts.

After this, it was a wrap. My name was flying around the global scene, and I was being invited to a different event in a different country every weekend. There was a lot of talent, but I was a bit different. My approach and style was different than most clearly focusing on Musicality and style and not just difficult moves. This let me stand out and innovate a style that was copied for generations after.

By 2009, I had won numerous world championships and continued to prove as an innovator in the dance, competing, judging and winning competitions all over the world. I had clearly solidified my name in the scene, but I wanted more. So I moved to Hollywood where some friends were doing movies commercials and TV.

When I got to LA, things happened fast. I met the choreographers that were working on everything and quickly started to make my mark in Hollywood. My first big job was like a dance double in the Dance franchise “STEP UP.” From there, things took off. From movies to commercials to TV I was working a ton and building relationships in the Industry dance scene while still competing and winning worldwide.

Since then, I have continued to inspire the Breaking scene worldwide competing Judging and teaching around the world. I have danced with many artists including Chris Brown, Justin Bieber, Taylor Swift, Miley Cyrus, Tinashe, Gwen Stefani and many more… I have been in more than 11 Feature films, Performed at every award show, done tons of commercials and been lucky enough to step into Acting and modeling through dance.

I never thought Breaking would take me to where I am now, but I am grateful for the Journey and can’t wait to see what is next.

Has it been a smooth road?
I have been Lucky enough to have had a pretty smooth road, but of course, there have been struggles o along the way. The hardest thing to do was balance the competitive presence in the Breakdance scene while Hustling and staying relevant in Hollywood.

Many Bboys that move to Hollywood fall off while focusing on auditioning and making it in the industry. But I managed to do both pretty well. I also had a very bad knee injury in 2005 at a very important time in my dance growth. I couldn’t dance for almost a year and thought about quitting.

After getting a knee operation in 2006 and realizing that it didn’t even fix the problem with my ACL I had to reinvent my style a bit and kept it moving. I almost quit at the time and I’m very thankful I didn’t.

So, as you know, we’re impressed with KID DAVID – tell our readers more, for example, what you’re most proud of as a company and what sets you apart from others.
In dance, I was always known for Originality, Musicality, and style. I was one of the first breakdancers competing on a world stage that made the DANCE and MUSIC a focus more then just moves. Mix that with innovation and moves that had never been done, and it was a serious recipe.

As far as my business, making it a breakdancer and self-employed personality means you have to Hustle in many different ways. From Motion capture on Video games, Choreographing movies, starring in Reality shows, going on tours with Artists, Acting, Modeling and even making my own Clothing line I have managed to make my own lane.

Let’s touch on your thoughts about our city – what do you like the most and least?
What I like best is the California lifestyle and landscape. I have always been very connected to nature and being outside and no better place then Cali. Growing up snowboarding, skating, hiking while being able to be in Major cities where ART and music were thriving was key to shaping who I am.

As far as LA is concerned, I love the Ocean. The waves here are great, and I can surf in the morning and be shooting at some Major studio in the evening. There is so much you can do in LA creatively, and you’re surrounded by so much talent.

What I could do without is the dog eat dog rat race mentality. Also, the fake aura around Hollywood is disgusting. I miss genuine real people with no agenda. But I guess it’s the BIz. If you know yourself and have tough skin, you can do anything you dream of here. 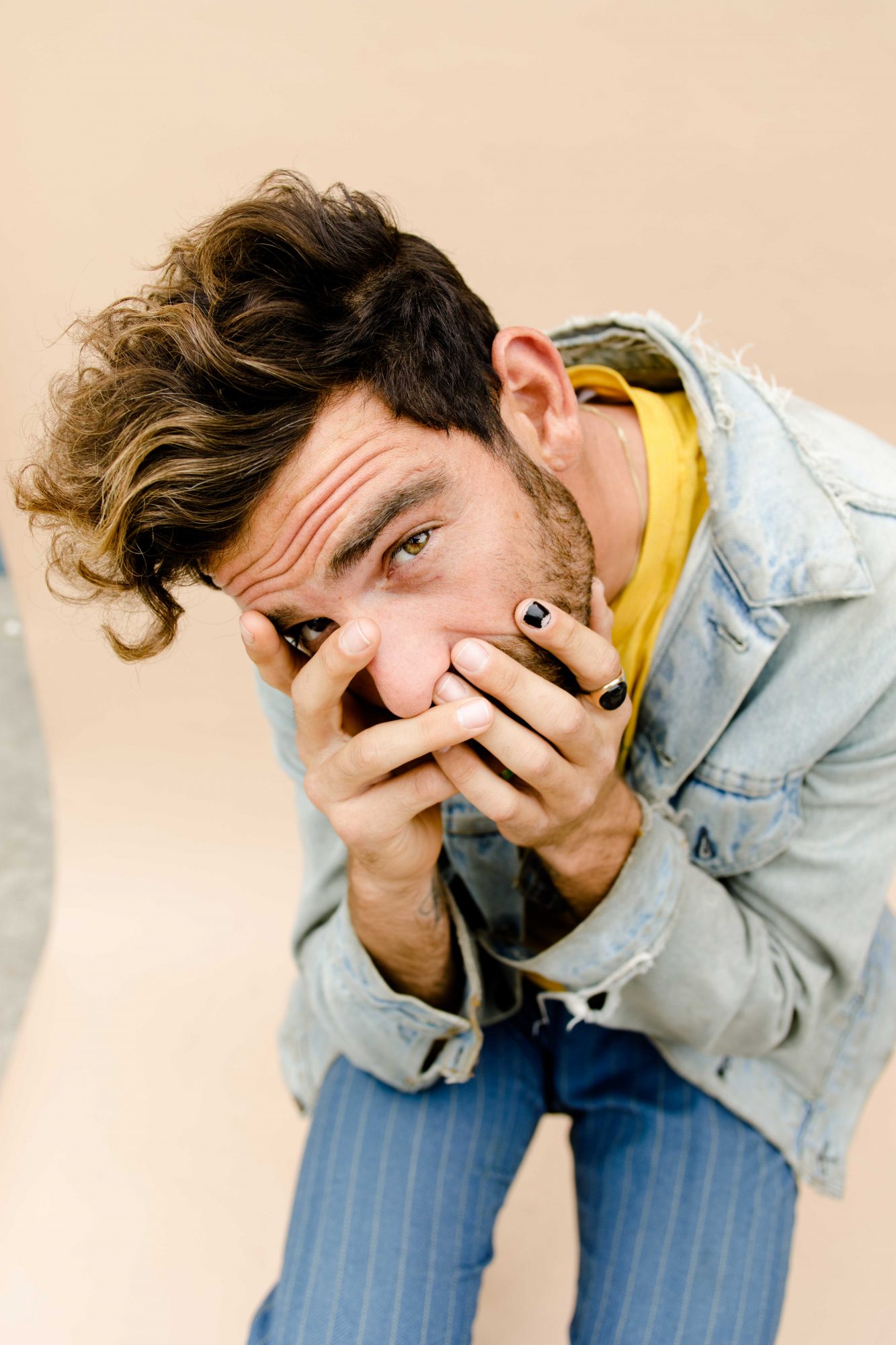 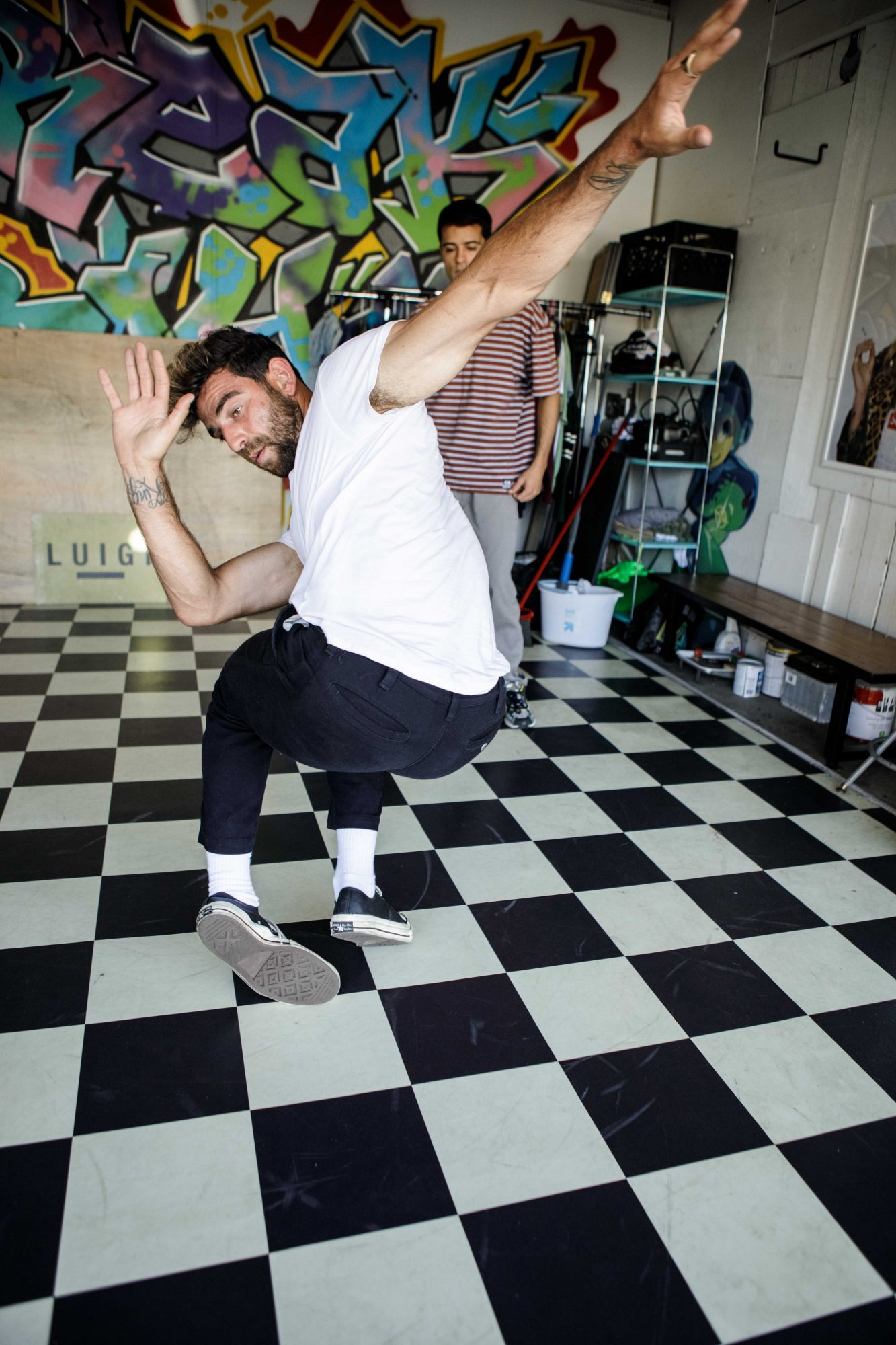 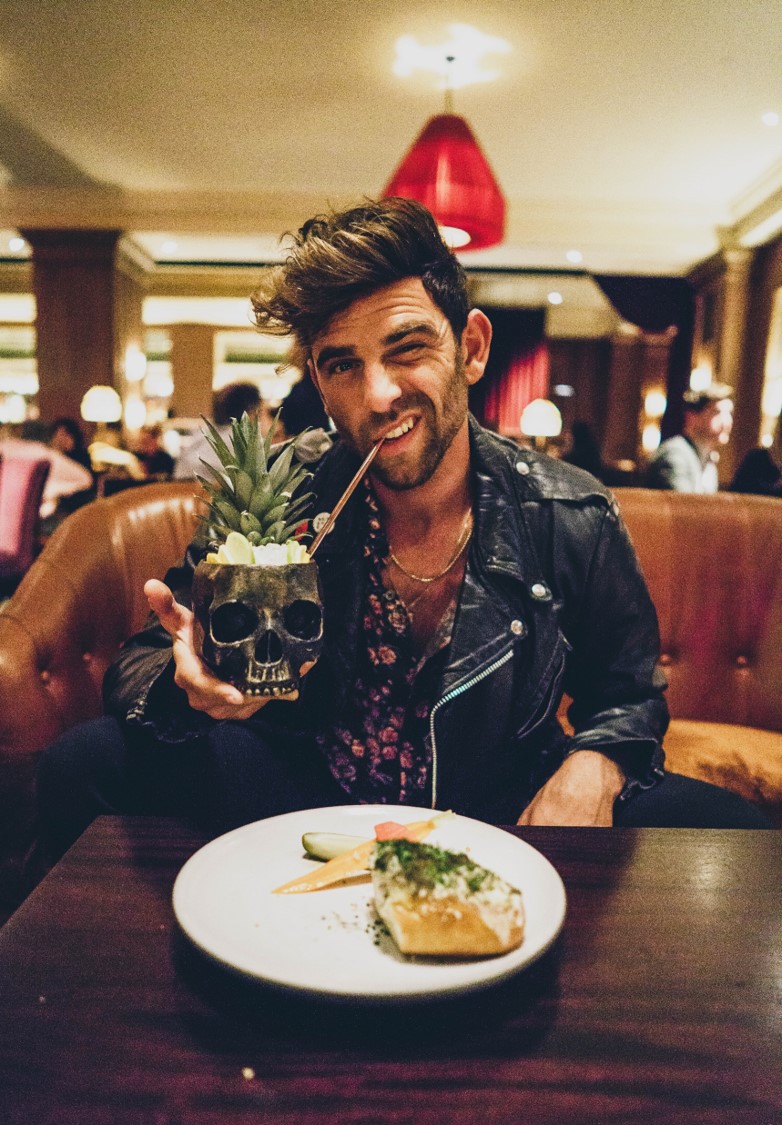 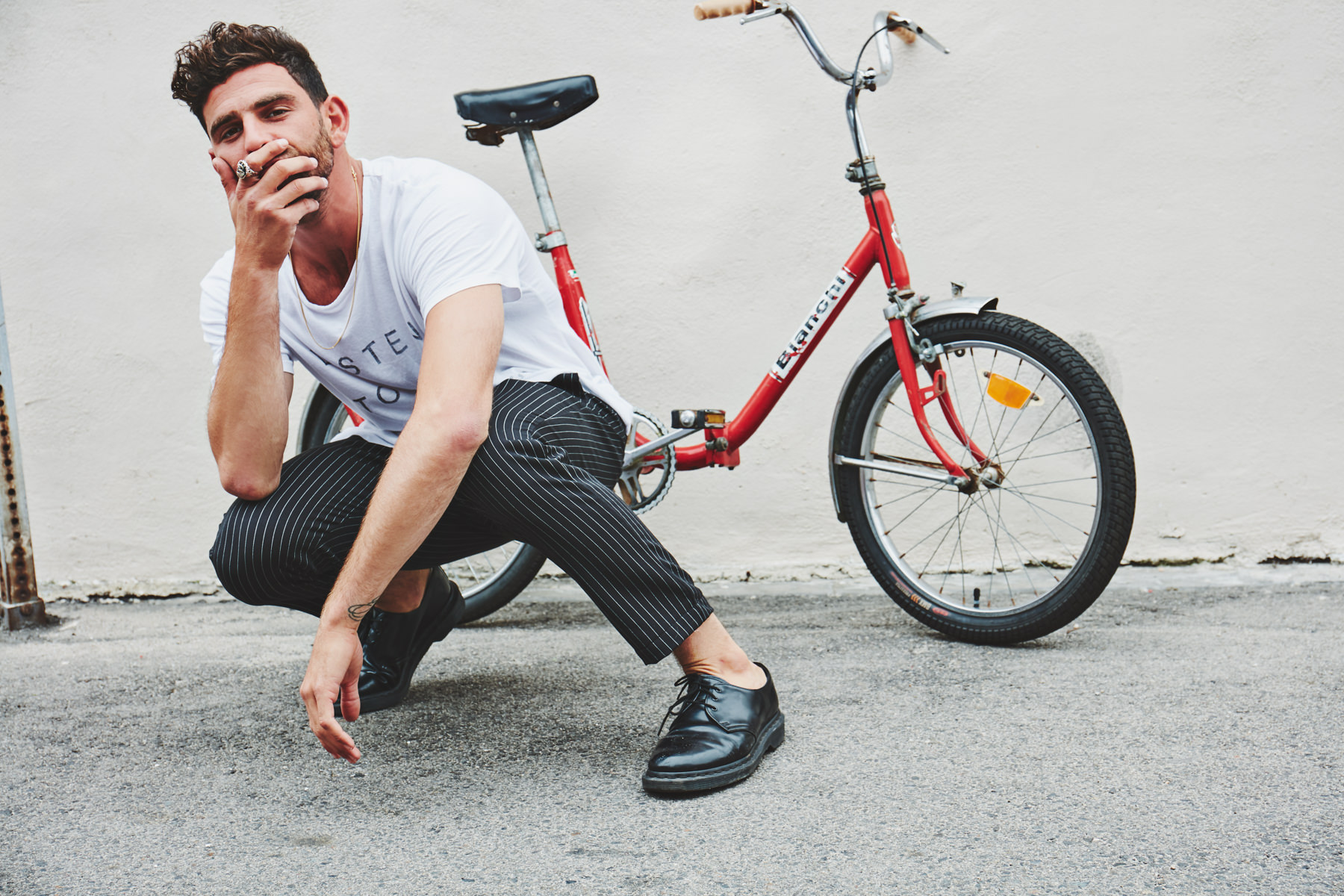 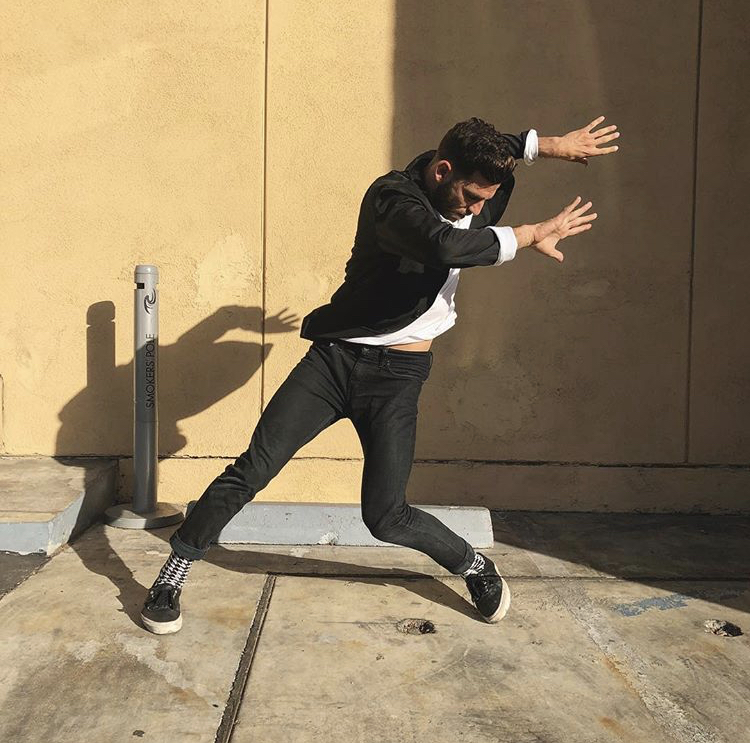