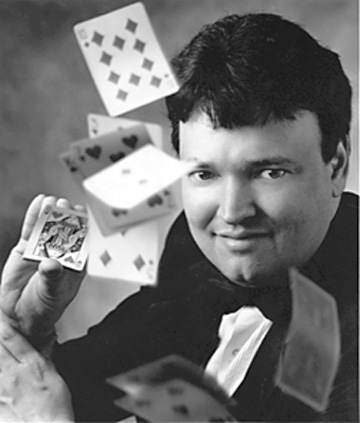 Today we’d like to introduce you to David Neubauer.

So, before we jump into specific questions about the business, why don’t you give us some details about you and your story.
As a young boy I was interested in magic, but like most magicians, the bug really bit at age 12. For my birthday that year, a neighbor gave me a magic set that her son had had. Half the pieces were missing and there were no directions, but that did it. I had to figure out how to make it all work. There was no Internet and I didn’t know anyone else doing magic, but that was the jumping off point. I was extremely shy at the time and magic helped me come out of my shell.

After college, I went after performing full-time. I performed in the finale of Barry Manilow’s “Manilow on Broadway” Tour, entertained the celebrities backstage at Comic Relief, several Jim Thorpe Awards, American Music Awards, at lot’s of industry wrap parties, performed in shows with Dick Van Dyke, Mac Davis, Pattie LaBelle, Ty Herndon, John Michael Montgomery, Frank Calliendo and more and have performed for ton’s of celebrities (lot’s of photos with them on my website).

We’re always bombarded by how great it is to pursue your passion, etc – but we’ve spoken with enough people to know that it’s not always easy. Overall, would you say things have been easy for you?
For the most part it has been a smooth road, some of the challenges are that some magicians starting out copy parts of the bios and customer quotes from established professionals, changing a few words here and there, and claiming that they performed on shows and for folks they didn’t (and in some instances could not have). However, that seems to be lessening.

So, as you know, we’re impressed with David Neubauer – Magic to Blow Your Mind! – tell our readers more, for example what you’re most proud of as a company and what sets you apart from others.
I provide magical entertainment at homes, businesses, and venues throughout LA and beyond.

My specialties are my “Strolling” (or walk-around/table-hopping) Close-Up Magic, and my Stage show. Though mostly known for my playing card magic, my shows include mind-reading, as well as money magic, ropes, rings and an assortment of other things.

I’m most proud of the reactions I get from the guests and the raves I get from the hosts or producers. Around 90% of my performances are repeat bookings or from personal recommendations from people who have seen my shows.

What sets me apart from the others? Sometimes I get booked because they have a new magician each year – I’ve been lucky in that just about all of those become steady clients, they never go to another performer. I even have a few clients that move their event so I can be there! Another thing that sets me apart is that folks know what they will get: the maximum entertainment possible!

So, what’s next? Any big plans?
I’m constantly coming up with new magic and ways to improve the effects that I actually perform. This last year included being the Magic Technical Advisor for the TV series “Jane The Virgin” – and we were able to work it out so it did not interfere with my regular shows. I’d like to expand the consulting, especially on-set, Working with the cast and crew was a lot of work, but great fun!.