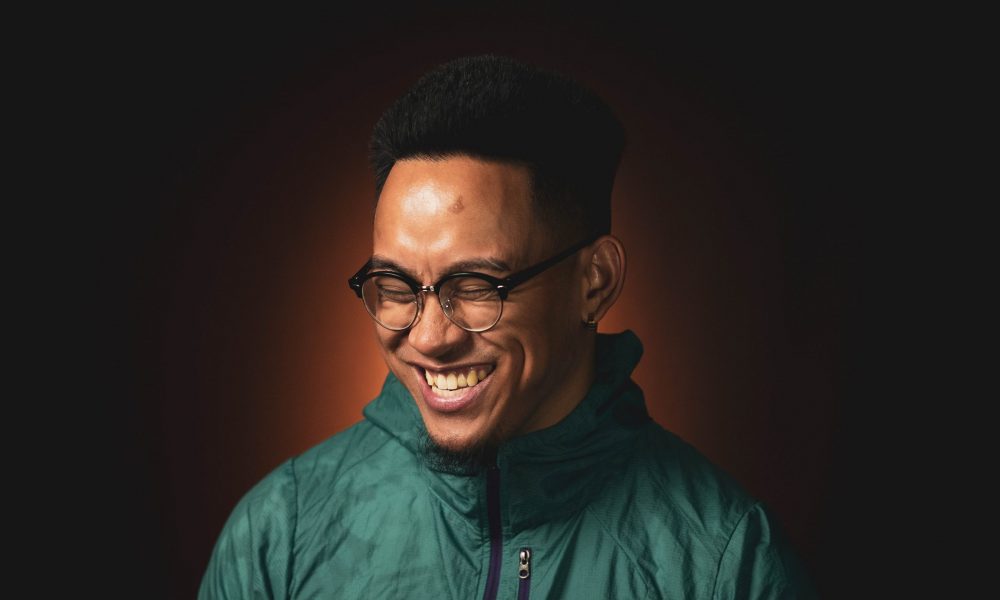 Today we’d like to introduce you to David Galvan.

David, can you briefly walk us through your story – how you started and how you got to where you are today.
I am a pianist/composer, and I was born and raised in Southern California. I have played the piano since I was five, and next year it’s going to be crazy to say that I’ve played the piano for 20 years. Growing up, I remember I would find the sheet music for all types of music online – from video games to pop songs – and I would just sit at the piano and learn them for fun. Then, I would post covers of the songs on YouTube – with my most-watched video being at 93K views. Tracking back to the beginning though, there are a lot of musical genes in my family. My mom is a singer – and a lot of her siblings are also singers, and my dad was a musician. Whenever I would go to parties with my family, my dad would always tell me “bring your piano books just in case they have a piano there so you can play for everybody.” Surely enough, there would always be some type of way for me to play whatever pieces I was working on for our family and friends. I would take part in annual piano competitions with the Accordion Federation of North America, and it wasn’t until I would bring home First Prize in my categories each year that my parents realized I should pursue music. I’m grateful for my parents’ constant reminder to practice daily because if it wasn’t for them, I don’t think I’d be where I am today.

Fast forward to today – I am now about to finish my Bachelor of Music in Piano Performance from the Bob Cole Conservatory of Music at California State University, Long Beach. I have accompanied multiple choirs at different schools and churches. I play for auditions and in orchestra pits for different musicals. I have been the Music Director for a couple of shows, and I have composed for both dance companies and cultural events. Every now and then, I will play keyboard in different jam sessions around LA. Currently, I am working on releasing multiple singles on streaming platforms like Spotify and Apple Music, and soon, I will be working on a full LP!

We’re always bombarded by how great it is to pursue your passion, etc. – but we’ve spoken with enough people to know that it’s not always easy. Overall, would you say things have been easy for you?
There has definitely been a fair amount of struggles. I was a premature baby born at six months. I only weighed 1 lb. and 18 oz. My parents didn’t think that I was going to make it, and they said I had to stay in the NICU for three months with a respiratory system hooked to my body. When I got home, they said a therapist would always come to make sure that I was developing well. My mom said I would never talk; if the therapist would ask me something like “Where’s the square?” I would just point to it but not say a word.

As a kid, when I would always have to practice piano, there were definitely times where I wanted to quit lessons because I would be stressed out from practicing for a competition or I just wanted to go out and play with other kids or play video games. There was even a time where I was taking piano lessons from 2 separate teachers in one day. I know that if I quit lessons as a kid and gave up then, I would never have accomplished all the things I have done today.

When it came to decide what I wanted to do after I graduated high school, I actually doubted if I wanted to do music as my career. I knew that it was a risky move and especially as a Filipino-American, a lot of Filipinos end up being nurses, engineers, or anything that’s not in the arts. I was scared at the time, so I tried to major in Accounting because my sister told me that it was stable. After about a year of taking business classes, I realized that it wasn’t for me. I switched to music and made one of the best decisions of my life.

I think that as a Filipino-American, it was also scary to pursue music as a career because you don’t see many Asian-Americans in the music industry nor support for Asian-Americans in the arts. It’s also why I always try to support all of my other friends pursuing the arts in whatever shows they are in or what they hold because I know what it’s like to prepare for a show and not have as much support as you wish you had. Growing up, I was able to see some of my musical inspirations that looked like me on YouTube doing the same thing that I was trying to do – artists like AJ Rafael, Jeremy Passion, Gabe Bondoc. It was so inspiring to see other Filipino-Americans who were also playing the piano and composing songs that it pushed me to know that I could also be successful in music. Now I hope, one day, to also be a leader in the arts representing Filipino-Americans.

Today, I think some of the challenges that I find with being a musician is trying to make the living work. Some days not knowing when a check will come in the mail, trying to keep up with bills when you have an off-season with work. The amount of work definitely fluctuates. Demand for gigs will go up one day and then for the next few weeks be slow, so I always have to be on my feet. It can be hard when I see my other friends who have normal 40-hour jobs have normal paydays, but I know that one day all of my hard work in music will pay off, and God will bless me throughout all of these obstacles.

Seeing where I am now, I know God gave me the chance to live; I know that I have a purpose, and that it is music.

We’d love to hear more about your work and what you are currently focused on. What else should we know?
GALVN is a new side of me that I haven’t been able to share with the world until now. Before GALVN, my friends knew me as “David, the guy who plays piano” but what I now want people to know me as is “GALVN / David Galvan, the great songwriter/composer.”

I just released my debut single, “Moon” back in October of 2018 and it was honestly scary because I have never released my original music to the public unless it was a piano instrumental and I didn’t know how people would react. I actually wrote it at 2am in a practice room at CSULB for my girlfriend. My first single ended up getting placed on an official Spotify playlist and around 25,000 streams so far. I know that not too many people release their first single and get that much support with not even having a fan base so I have definitely been blessed and I can’t wait to share what else is in store to the world.

What people can expect to hear from GALVN is not just one genre of music but multiple genres that have inspired me growing up from having both a Classical background and also playing different jazz pieces. Listeners can expect to hear orchestral / piano pieces, R&B pieces, New Wave, and just different types of music that I feel will set me apart from others because I will be able to do it all proudly.

I think that it is important to follow your passion and follow your dreams because you only have one life to live so it’s best to do what will make you happy in the end. I am glad that I am able to pursue my passion in music and share my talents with the world.

Has luck played a meaningful role in your life and business?
Luck has played a lot of different roles in my life as a musician. For my first Musical Director job, I was able to work with the closing cast of Aladdin: A Musical Spectacular from Disney’s California Adventure in their closing cabaret, “Agrabah Jingleball” at the Rockwell Table and Stage in LA. I got this opportunity because one of my good friends who I met through my piano teacher’s Accordion Jazz Ensemble “D&G Ensemble”, was related to one of the cast members looking for a pianist. Without taking lessons from my piano teacher and being in that ensemble, I would have never gotten that gig.

I have also been lucky to book my first audition pianist gig through my good friend, AJ Rafael. He was music directing a production of “Thoroughly Modern Millie” at Performance Riverside and he needed a pianist to sightread and I shot my shot to see if I could do it. Through this gig, I was able to play both the auditions and in the orchestra pit for my first musical production, and it has also lead to more auditions/orchestra pit gigs.

Another lucky gig I got was when I met a friend, Rey Tabuyo, at a party with my cousins and he needed a band to help him perform at the Belasco Theater in LA because he was opening up for Eric Bellinger and Ginuwine. That was definitely one of the most fun gigs I’ve played to date!

On the other side of luck, in preparation for my Senior Recital at CSULB, two weeks before the recital, I tore my tendon in my finger while I was practicing. I’m currently not able to play piano for two months while it heals up, so I had to postpone my Senior Recital for next semester. The doctor says that if my finger still isn’t healed when I go back, they have to perform surgery, so I am praying that I don’t have to do that, and I get a full recovery! 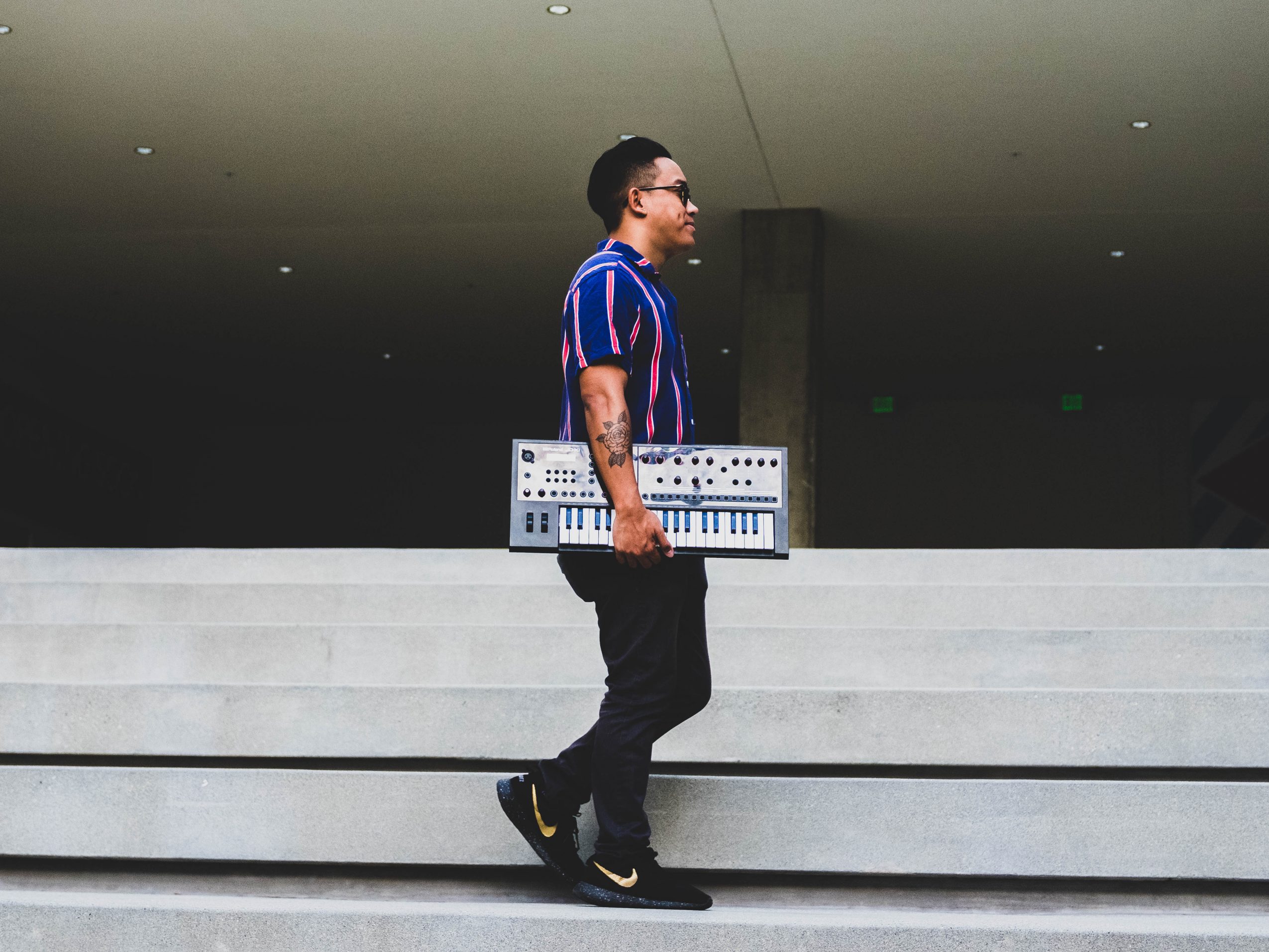 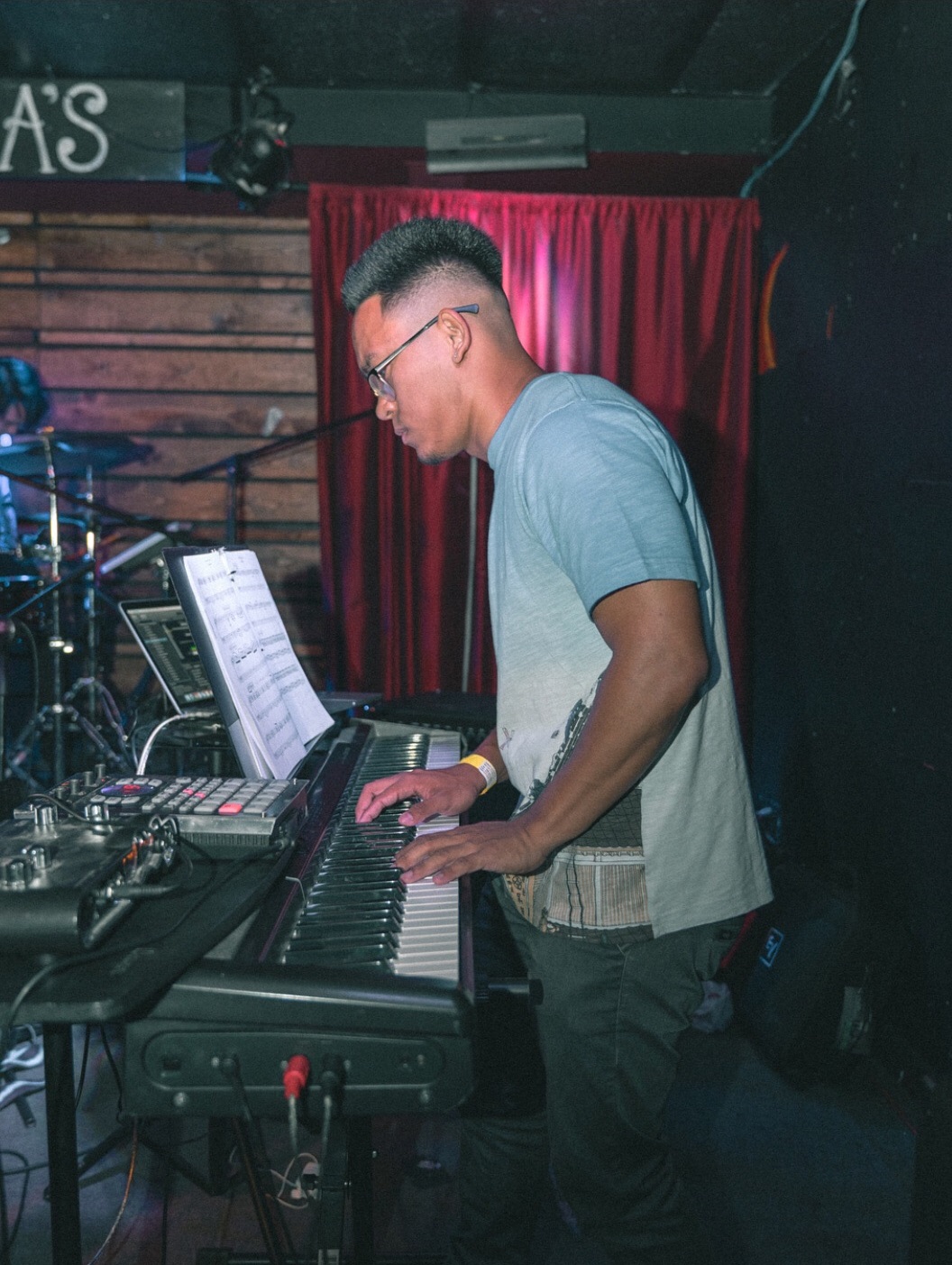 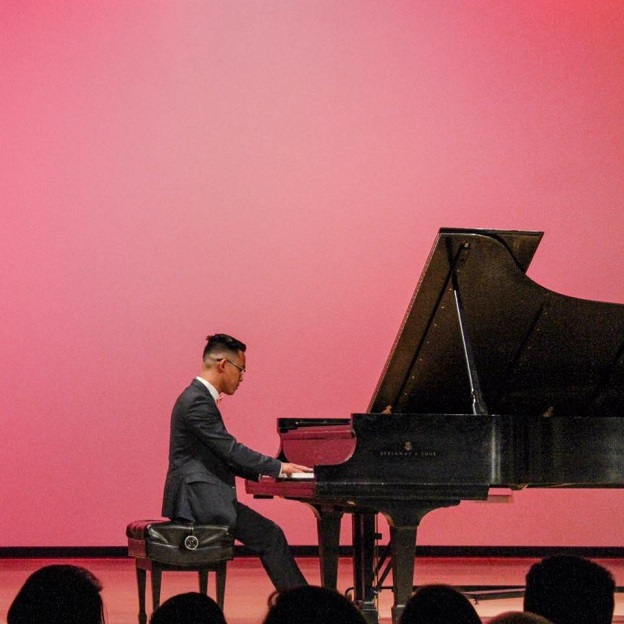 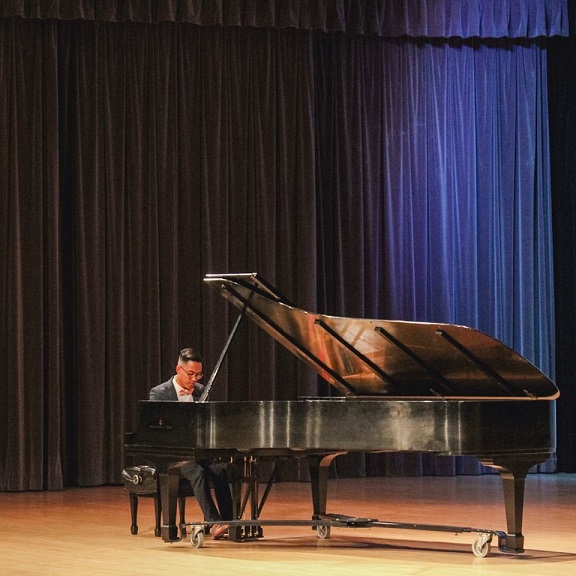 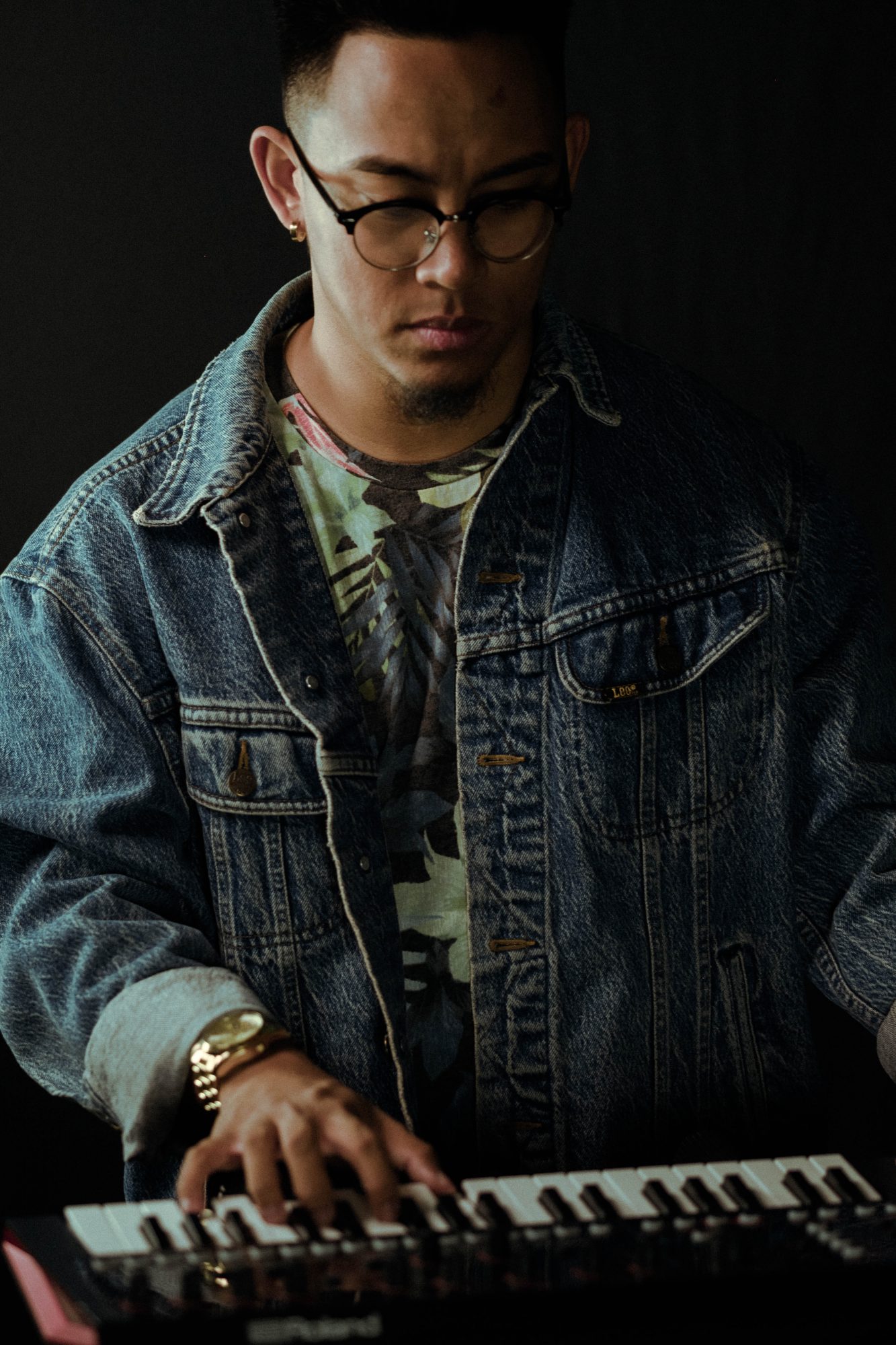 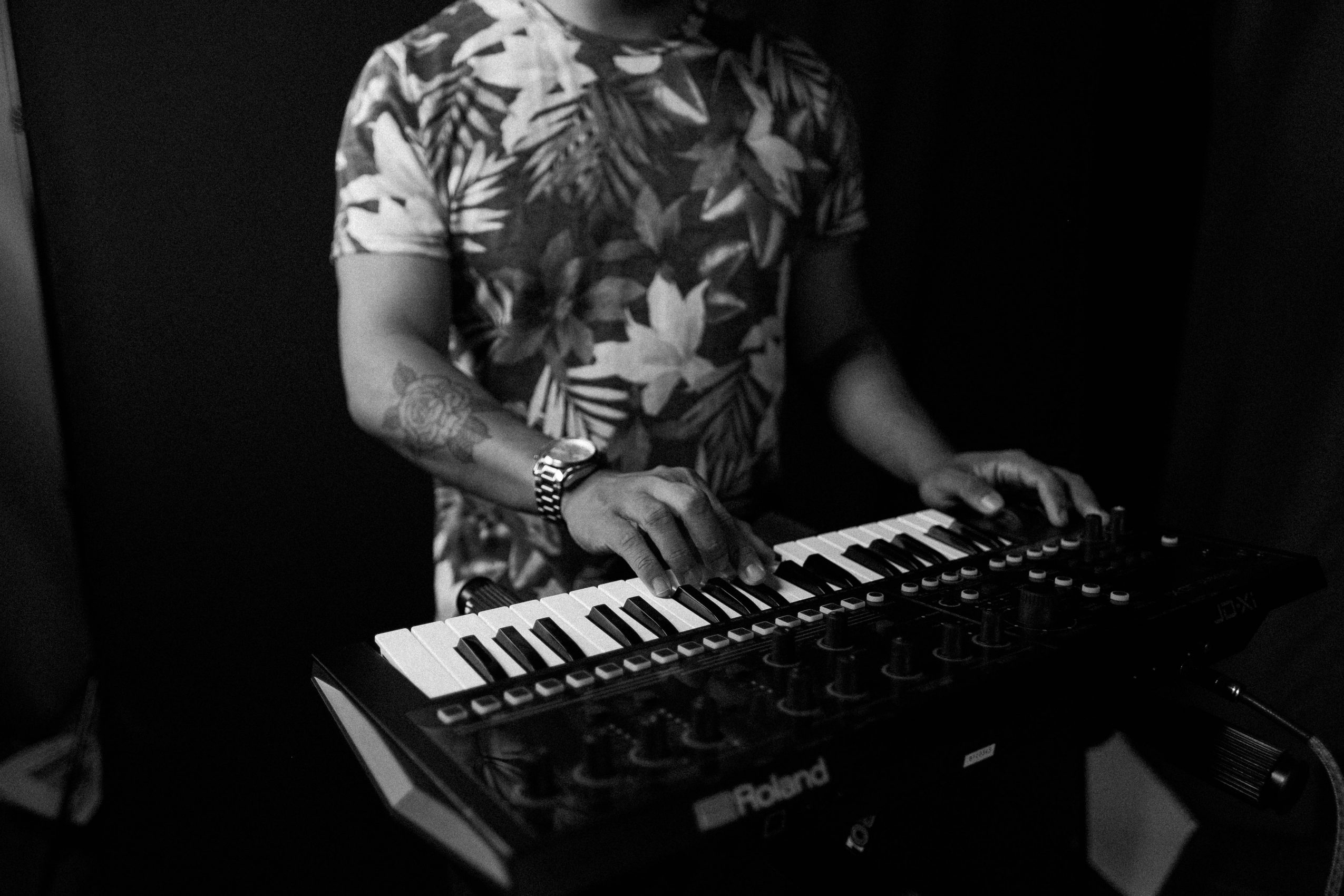 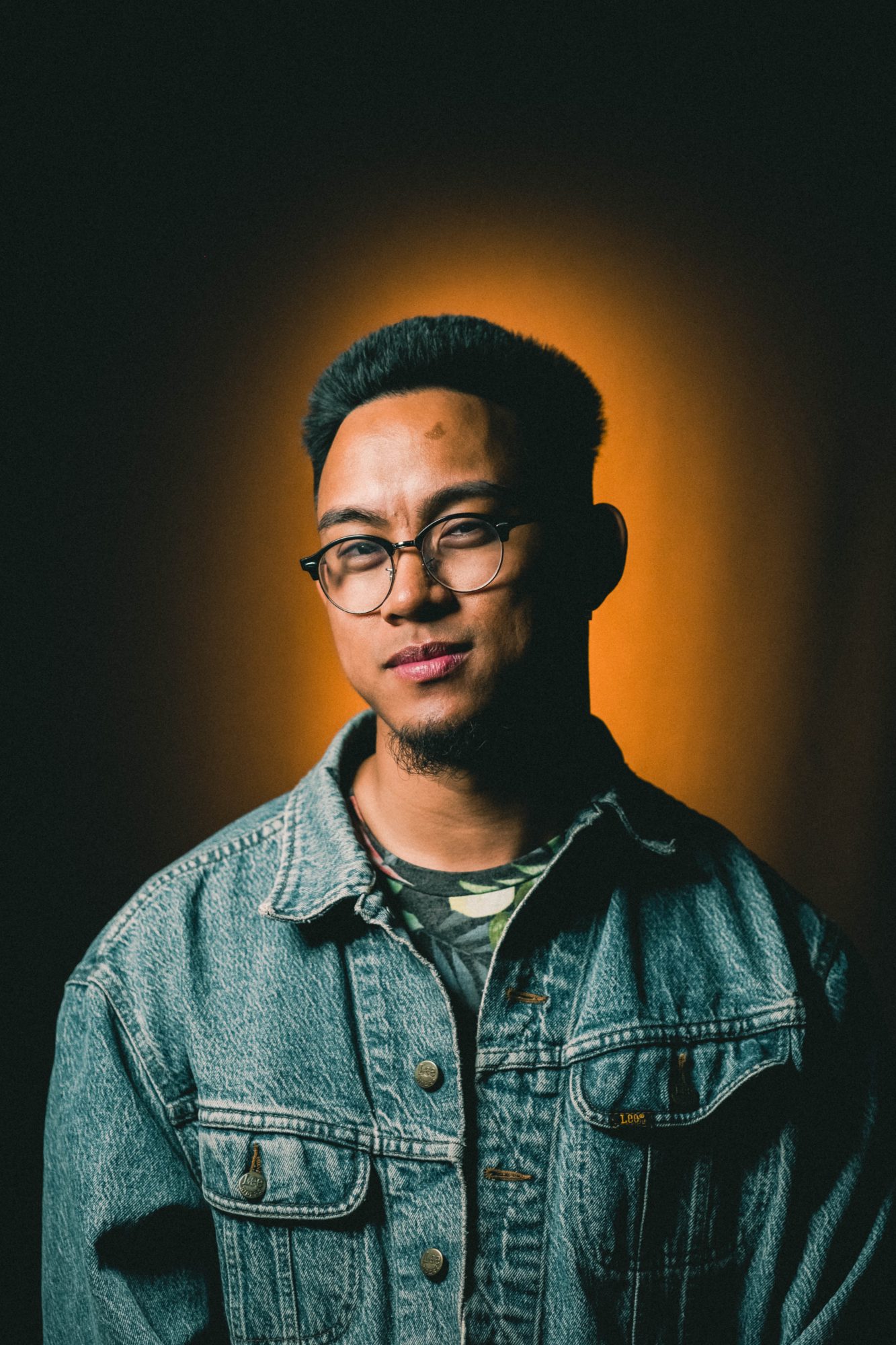