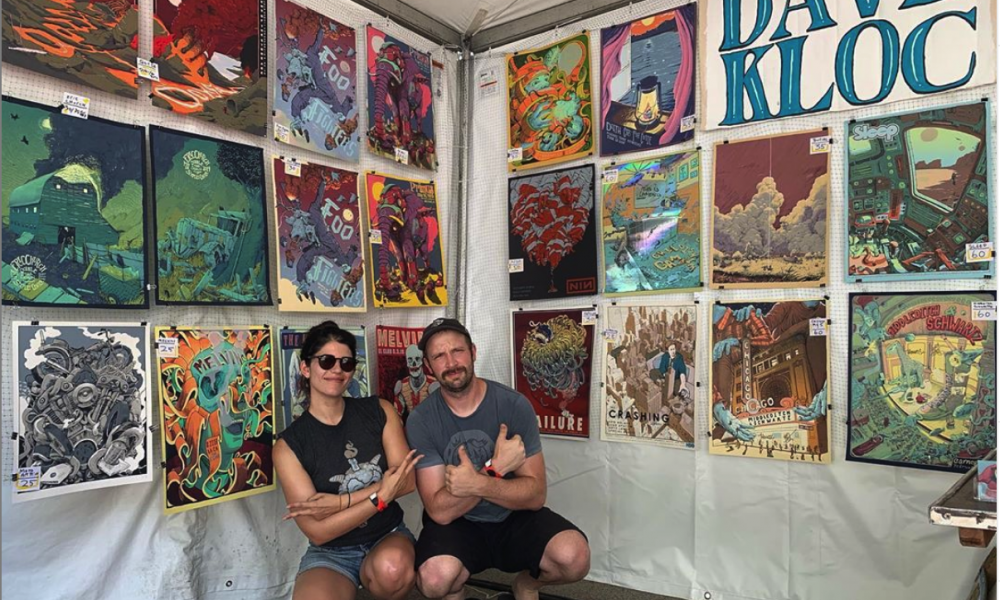 Today we’d like to introduce you to Dave Kloc.

Dave, let’s start with your story. We’d love to hear how you got started and how the journey has been so far.
Oh boy… I got into art school (University of Michigan) after a gap-year-apprenticeship painting hockey goalie masks in Worcester, MA. I studied performance art and illustration for four years and then moved to LA after my band in Michigan broke up and I realized my hatred of winter was going to outweigh my reasons to stay put. I came to LA with intentions to write (and had a potential job lined up) but the week I was in my car heading west, the writer’s strike happened and my job went away. I then took up touring with bands as a tour manager/merch guy. I did that for about three years – in which I got to somehow get paid to go to around 20 countries and have the time of my life. While I was home between tours, I met a screenprinter who taught me the ropes while I helped him tidy up and pull prints at his shop. When touring wound down I was taken to a weekly comedy show that was starting up – and I suggested to the host that he should have posters for the shows, he asked if I’d do it – so I started! I did a poster every week for six years, ending in 2016, and continued on doing band posters. Now in 2020, I’ve done probably 450 posters for different events/bands/comedians and most importantly a poster for Bernie Sanders. That’s it!

Overall, has it been relatively smooth? If not, what were some of the struggles along the way?
On paper it would seem it was smooth – but for many years, I was working for free or next to nothing. There was a lot of “can of corn or can of black beans” for dinner plus salt if I felt adventurous. I didn’t find an overlap between my confidence asking for more money and my work being good enough to ask for that much until probably 2015 when I was able to start eating properly. At that time, I was living in a loft above my print shop – inhaling fumes and chemicals from the printing inks, so while I ate better, I was also developing Reactive Airway Disease – which doctors call RAD!

We’d love to hear more about your work and what you are currently focused on. What else should we know?
My company is just me, in my garage or at my kitchen table. I make band posters. It really couldn’t be much more simple, I make something that someone else gets to sell for a lot, and as long as they make money off the posters – I will continue to be able to make them. I usually get paid IN POSTERS so the impetus to make them look pretty is there. I’m most proud of being able to do this full-time. For many years I was doing this in the margins of my time working another job / dealing with “life” so to make the jump to doing this 100% of the time (with my “life” elements having been VASTLY improved in that time) has been rewarding and satisfying to say the least. It is not lost on me how lucky I am to be able to call this a career.

Any shoutouts? Who else deserves credit in this story – who has played a meaningful role?
The guy who I mentioned earlier who taught me to print, is Damon Robinson who ran NOMAD Art Compound in Frog Town, I wouldn’t be anywhere near printing without him. Same with Matt Johnson – who helped me get my posters off the ground when the comedy show (The Meltdown with Jonah and Kumail) took off. And then the folks who ran that show, Jonah Ray, Emily Gordon, Kumail Nanjiani and the owner of Meltdown Comics – Gaston Dominguez-Letelier, they were all extremely generous and gave me the opportunity to design/print and sell posters every week which gave me a portfolio and practice to turn this into a job once the show ended. And currently – everyone who takes a chance letting me make posters for their shows and certainly I can’t forget my wonderful girlfriend, Alexis who helps me in almost every aspect right up to holding the pen for me. I show her each step and get used of her great eye and knack for color. In reality – this is a job where if people weren’t really nice and helpful, I wouldn’t be anywhere, so my list of thank you’s would be longer than my fingers could type without turning to dust. 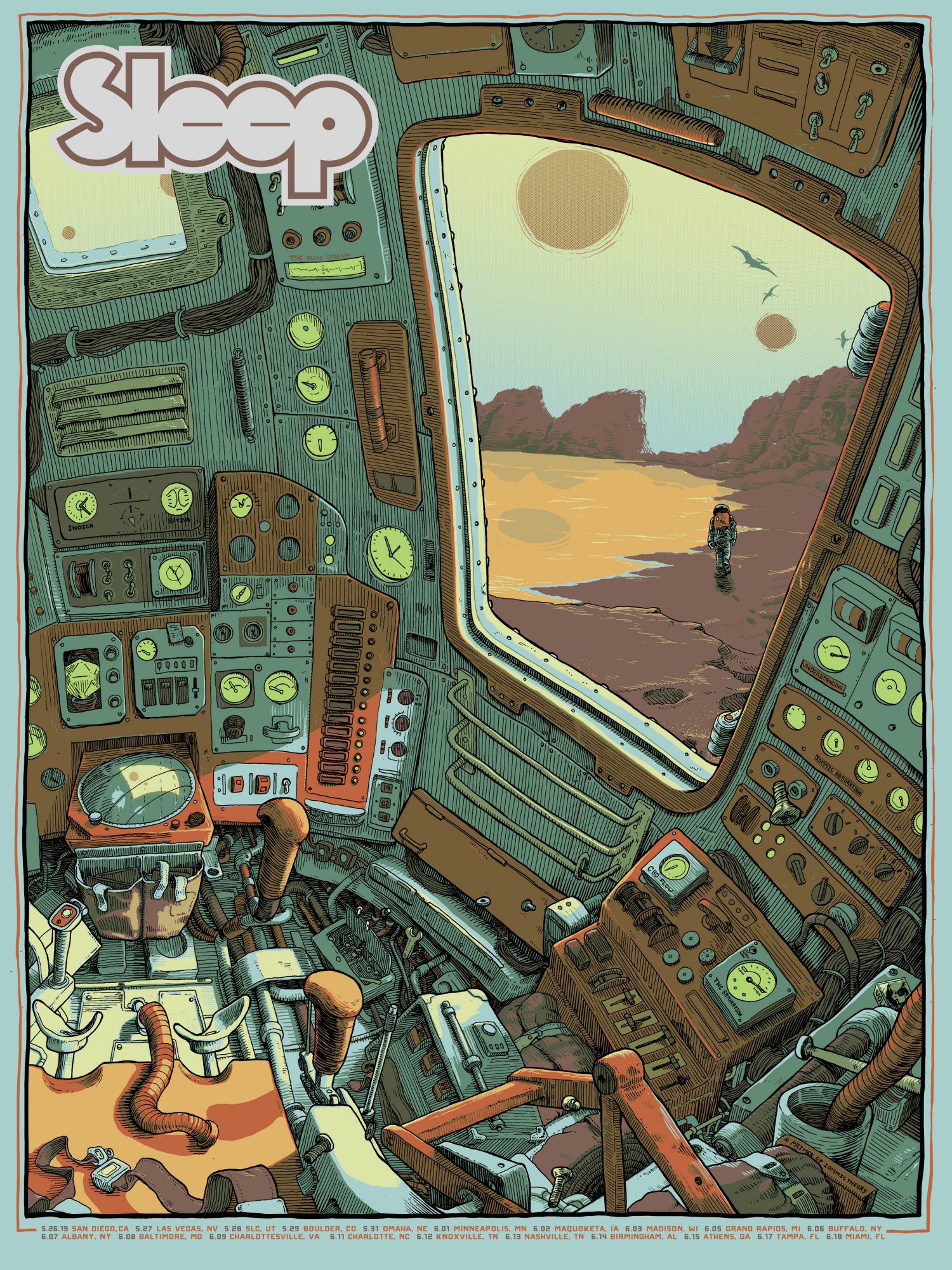 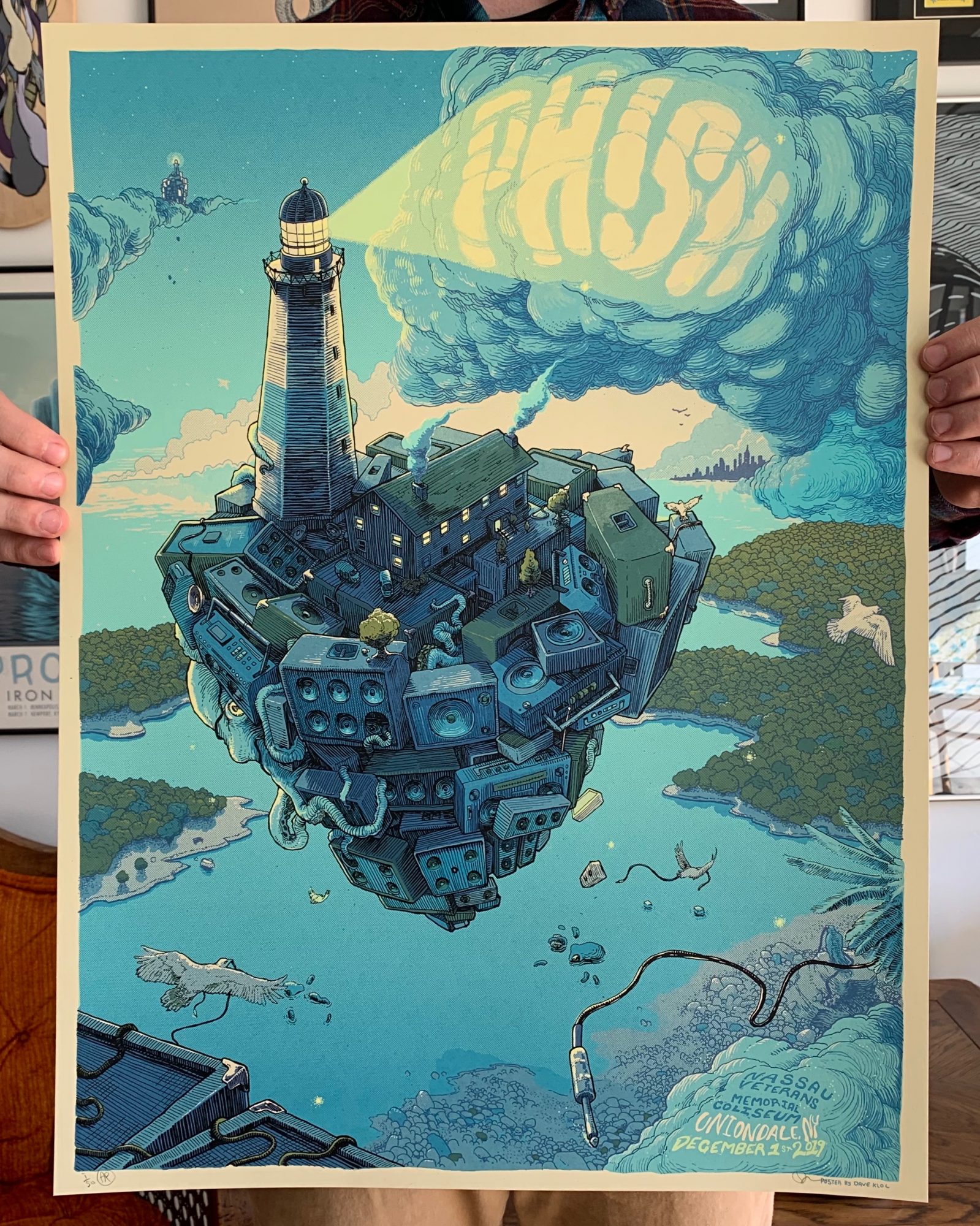 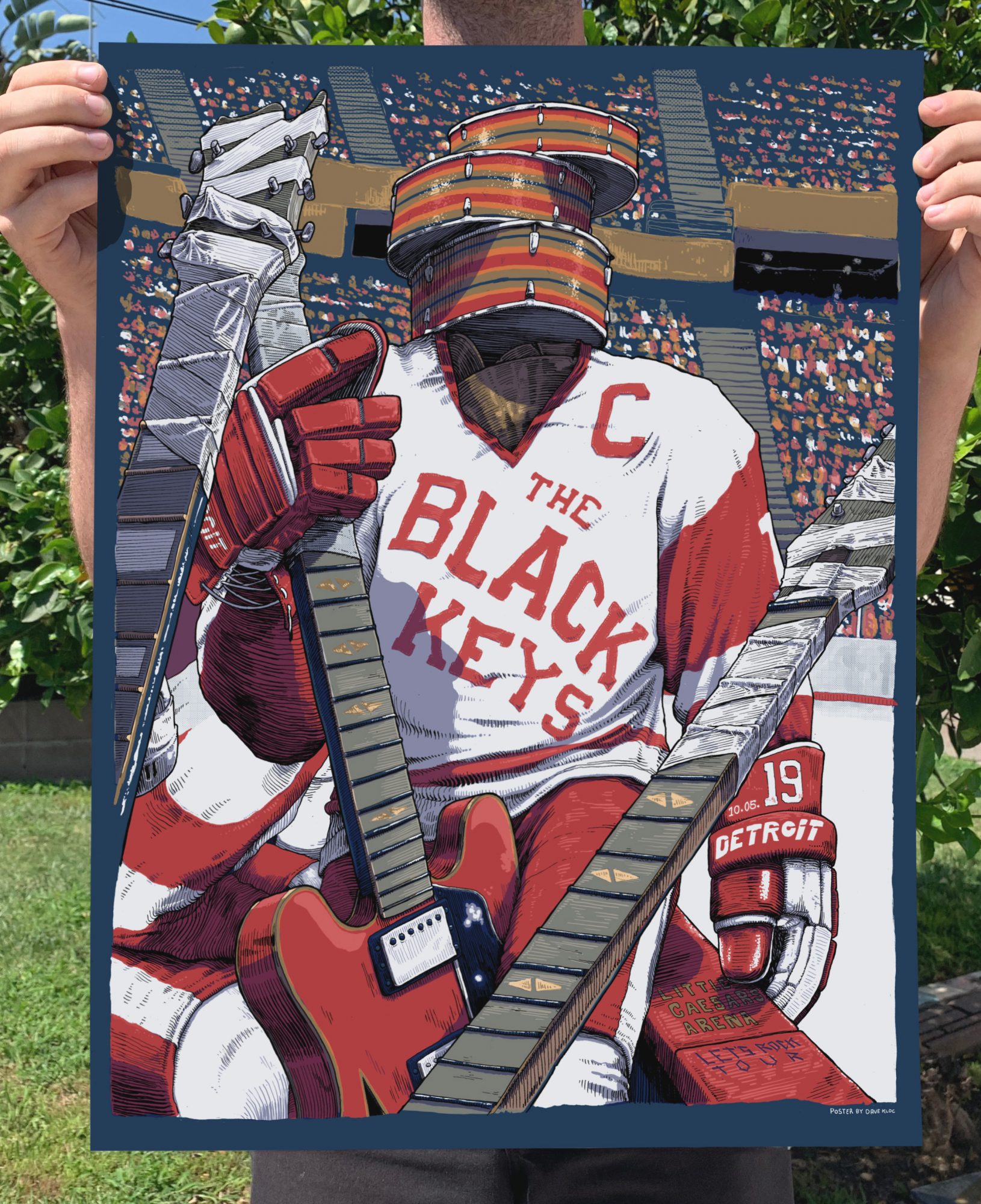 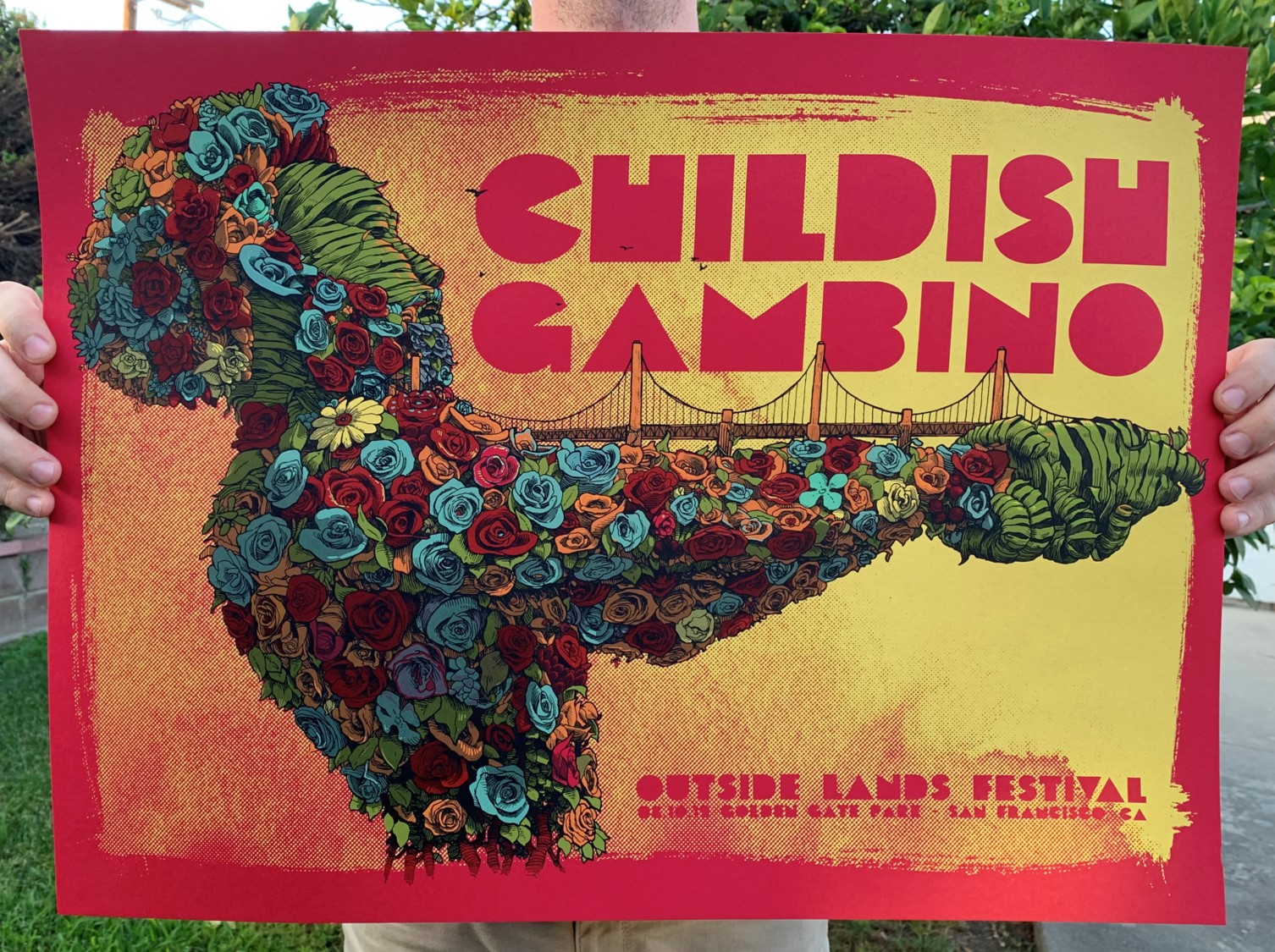 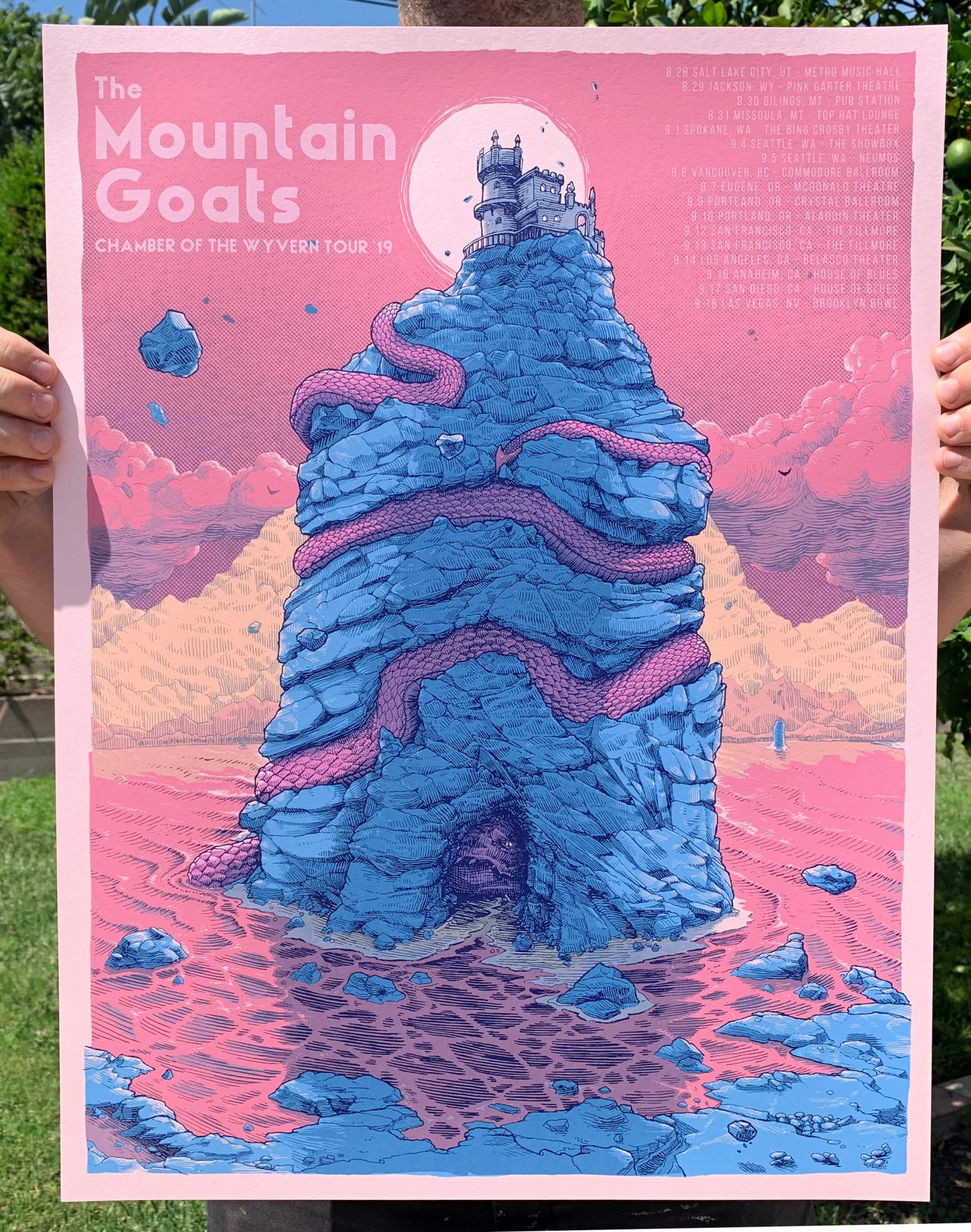