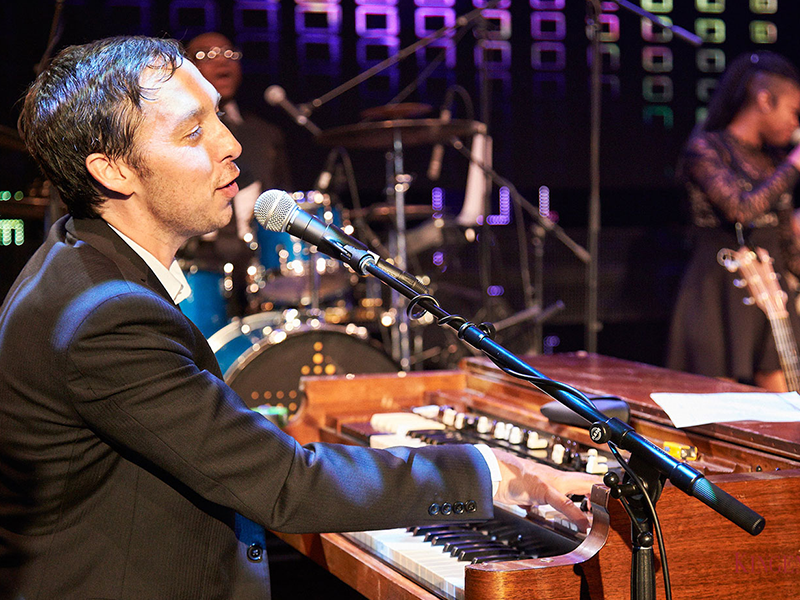 Today we’d like to introduce you to Danny Chaimson.

Danny, can you briefly walk us through your story – how you started and how you got to where you are today.
I grew up in the suburbs of Chicago, and moved to LA to pursue music as a full time touring musician. Over the course of the next ten years I got to work with many different incredible artists – from Kelis and Solange, to Mike Posner, O.A.R., Jem, Orgone, and Shwayze, before getting signed to an Indie label deal for my own stuff in 2009. My debut (and only) album as Danny Chaimson & the 11th Hour saw some nice success. We licensed songs to NBC’s Parenthood, had a song on the soundtrack to The Lincoln Lawyer, started getting airplay on KCRW’s ‘Morning Becomes Eclectic.’ Then right after 2010 SXSW, when LA Weekly named me their discovery moment of the festival (alongside some great company), I came back to Chicago, sold-out a show, and then never played again in that capacity. I had already decided to move back to Chicago and start what I considered to be the first genuinely cool wedding band- The Gold Coast All Stars.

Backing up, I got married at the Bel Air Bay Club in LA in 2009 – and after searching through all of the ‘top’ wedding band choices in LA, I truly couldn’t imagine any of them playing at my wedding. I asked my Father-in-Law to allow me to put together a band from scratch of my touring friends in LA, to play what I thought would be really cool to hear at a wedding. The music turned out to exceed all of our guests’ tough expectations. The blueprint was a band made up of the best original artists around (with lots of different singers just hitting stuff in their wheelhouse (one female =Aretha to Rhianna, other female = Stevie Nicks to Taylor Swift, acoustic guitar/singer = John Lennon to Lumineers, one guy’s singing ranged from Stevie Wonder to R Kelly, another guy singing Joe Cocker to Ray Lamontagne, a rapper doing Biggie to Kanye, and so on), which became the foundation for the band in Chicago. Right away it filled the niche of an option for people who were having really nice high-end weddings and who truly wanted the music to be incredible – with genuine artistry, star power and a concert-like energy- while never being cheesy. The response was overwhelming, and after bringing the concept back to LA 2 years ago when we started The Golden Coast All Stars, the response has been the same.

Great, so let’s dig a little deeper into the story – has it been an easy path overall and if not, what were the challenges you’ve had to overcome?
In Chicago the wedding market is extremely competitive, and although it’s a big town, word travels really fast – both good and bad. Growing up there, I knew this would be something I could take advantage of, and it proved to be true. It was a bit difficult being a total outsider coming into a tight knit wedding scene of planners and such. The first wedding I ever played was when I started The Gold Coast All Stars – so I was as much an outsider as I could be. Ultimately this worked to my advantage too, because I didn’t have any preconceived notions of what you were supposed to do as a wedding band. I was just going off of all of the weddings I had attended as a guest, and really trying to do the opposite of all the things I saw that made me cringe as a musician.

When we launched The Golden Coast All Stars in LA, I knew the music would be incredible. I had kept in touch with all of my former LA touring buddies over the years, who now were looking to stay in town more, and was able to handpick a group of incredible talent. My good friend, Ethan Phillips – who was the original bass player for Fitz & the Tantrums, was the perfect choice to head up the day-to-day stuff for the band. I had him come watch what we did with the Chicago bands, and then we had a few weeks of rehearsals to incorporate all of the song choices, cool mashups, and arrangements I did with the Chicago bands. Our first gig was at the TSE conference (a big national conference for the event industry) in Anaheim in 2015 and the band has never looked back.

LA is a bit different than Chicago as far as the word spreading quickly though. Weddings tend to happen more in a vacuum here, since there’s so many couples getting married with roots elsewhere. There aren’t 20 moms talking in the beauty shop the next day about how fabulous the band was last night, like there are in the Chicago suburbs. So, we’ve had to work harder to make ourselves known to the venues themselves, the planners, and other means to get our name out there. The good thing is that every event we play is like a 3-4 hour commercial for what we do.

Is there a characteristic or quality that you feel is essential to success?
I think being successful is really about finding a niche with something that you’re good at, and by starting Gold Coast Events, I was really able to do that. When I started actualizing the ideas for my wedding bands, I was drawing on what worked in concert setting – drawing off of experiences like playing Bonnaroo, the Fillmore, the Wiltern, etc. instead of drawing on playing in some cheesy wedding band. Being in touch with the music that people getting married actually listen to was key. I knew what to do with a Talking Heads song just as much as I knew what to do with a Jay Z song and I knew that there were so many cooler older songs that should be played at weddings that weren’t. There was so much in the catalogs of Stevie Wonder, James Brown, Sly & The Family Stone that people love, that you’d never hear at weddings. We’ve been able to bring that to life.

What separates us from any other wedding/event band anywhere, is that fact that we take the best collection of original artists and let them each shine in this group setting. Most wedding bands vocalists’ have great vocalists, but they tend to come from musical theater type backgrounds. I wanted the guys headlining Hotel Cafe and The Roxy. Most wedding bands’ musicians are good, but they’re more music teacher type guys – I wanted the guys that have toured the country playing in front of tens of thousands of people, who knew how to put on a show. Most people remark at the end of one of our weddings/events, that they feel like they’ve just been to the most amazing concert ever with all of their family and friends.

After personally leaving the original performing side of music (I still produce and write for major artists) I was wondering if playing weddings would be fulfilling. I’ve been really pleasantly surprised at how fun it’s been – there weirdly isn’t that big of a difference in playing a bunch of great songs for a wild wedding crowd, than there is playing original music at a sold out show. They’re both great in their own ways- it’s just nice that I get to sleep in my own bed every night now, and play with my daughters every morning.

What have been some of your proudest moments?
My pre-wedding days had a lot of proud moments – playing on Jay Leno with O.A.R., playing venues like Wembley Arena in London, The Gorge in Washington, and Bonnaroo, getting to open for one of Etta James’ last shows at the Wiltern as my first big show as Danny Chaimson & The 11th Hour.

Since starting Gold Coast Events, it’s truly been an honor to be a huge part of one of the most important days of people’s lives – week after week. It’s something I really take seriously, and it’s a blessing to be around so much positivity and joy. We’ve gotten to do some amazing things – we’ve rocked a 500 person wedding in Indio, CA at the Coachella grounds – which won the national high-end wedding of the year at the 2015 TSE conference. We’ve been flown to Maui for corporate parties, flown to Colorado for one of the nation’s first marijuana themed weddings, featured in the NY Times, flown to play The Alamo Dome in San Antonio for 40,000 people at USAA’s annual Holiday party.

It’s also really cool to have The Golden Coast All Stars killing it in Southern California now. It was a real full circle moment to be able to come back out here and establish such an amazing band after the success of the Gold Coast All Stars and The Chicago Players.