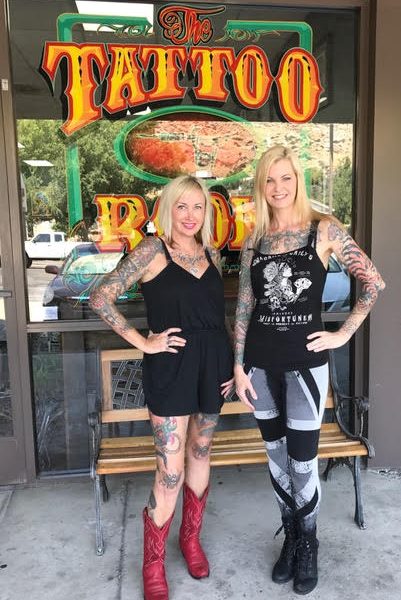 Today we’d like to introduce you to Danielle Oberosler and Heather Sinn.

Danielle and Heather, please share your story with us.
We both started tattooing more than 20 years ago, which is a story in and of itself. We worked together in 1998 and remained friends throughout our careers. I opened The Tattoo Room in 2004 and after years of pleading, Heather joined me as partner in 2012. Heather and I work hard to run a very professional tattoo shop. If you know our industry, then you understand the difficulties we face. But, we feel that just being a professional put us ahead of most of the competition who don’t show up to work on time, or close early, and are not prepared to work when they are there. “Be a professional” is our mantra. Our customers appreciate it

Great, so let’s dig a little deeper into the story – has it been an easy path overall and if not, what were the challenges you’ve had to overcome?
When we started tattooing, there weren’t very many female tattooers. Heather feels that the biggest struggle for her has been working as a female in a male dominated field, like the time she was asking for an apprenticeship and the tattooer threatened to physically throw her out of his shop saying, “We don’t want women in this industry!” When we aren’t wanted in the workplace, co-workers can be really mean in a tattoo shop. Like meaner than average. But my experience was different.

Needless to say, we worked in different shops and different states for parts of our careers. But, I felt like tattoo shops wanted a woman in the shop because they realized that half their clients were women.

Not to say I didn’t have the horrible workplace experience, but I worked with guys who poisoned each other and set each other on fire as a joke. So, I couldn’t take it personally as a man/woman conflict when the whole place was a boiling hostile environment. Not to mention all the times I was threatened by customers. Can’t even count on one hand.

Aside from my rough apprenticeship, the hardest part for me was opening The Tattoo Room. There were numerous public hearing meetings to try and open initially in Newhall. Which isn’t even an awesome place. But even though we won all the votes from city council to open, the mayor vetoed it! So, I opened in Granada Hills, and after 4 years I was cited for being illegally zoned. Even though tattooing could be in the area zoned for commercial endeavors, there was a special committee that decided tattooing wasn’t allowed in Granada Hills back in the 80’s. It was expensive to make the initial location, and then put in all the plumbing and remodeling for the 2nd location. I ended up in debt, and sued a little bit. But here we are. I think the stigma of tattooing has made it hard to open a shop.

The Tattoo Room – what should we know? What do you guys do best? What sets you apart from the competition?
We do custom tattoos. Which means that we don’t have flash to choose designs from, we draw everything. We want to know that every day we did the best we could for our customers. We not only considered what they want today, but what they’ll still be happy with in 10 or 20 years. Because we know what’s a fad, and how skin ages, and how ink spreads. We don’t specialize in any one style, we do almost every style of tattoo you can think of. And if we know we can’t, then we refer you to someone who can. That sets us apart from others who don’t know their limitations and will attempt things outside their skill set, or the possibilities of skin in general.

We’ve tattooed more than 20 years each and have seen our own work as it’s aged. So, where some young kid has his theories about tattooing, we have our facts. Our experience sets us apart.

What moment in your career do you look back most fondly on?
Heather and I have both won awards at tattoo conventions, been featured in tattoo magazines and books, and even been cover girls for tattoo magazines which have all been proud moments. Our shop won the Reader’s Choice award for Best Tattoo Shop in East Ventura County for 4 years in a row, and we were proud of that. But my proudest moment was when I tattooed my mom. I had always told her that when I opened my own shop, she was going to get my first tattoo. Instead of a groundbreaking ceremony, we called it a “skinbreaking” ceremony. My mom got her first and only tattoo, and the $1 bill is on my station for good luck. Heather’s proudest moment is when I asked her to be my partner. It was the first time she felt respected in our industry. It was a very validating feeling