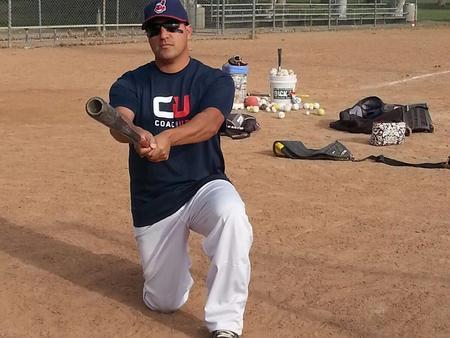 Today we’d like to introduce you to Daniel Flores.

Big Leaguer Baseball is owned by former pro baseball player Daniel J. Flores. Daniel is a 29-year veteran baseball player who still plays. Daniel has been coaching for over 20 years – he’s coached high school baseball, kid summer camps, junior teams overseas, baseball clinics, and countless hours of private instruction. Big Leaguer Baseball started 3 years ago when Daniel realized that he really wanted to keep his focus on individual player attention and small groups. Daniel has been passing on his knowledge to kids for decades and he spends every day learning more and more about the sport he loves and anything new that’s been introduced so that he can pass that on to his students, He’s trained with Tom House who was featured in the Disney Movie Million Dollar Arm. Tom dubbed Daniel “Legend” after Daniel breezed through a Tom House workout that even had a future hall of Famer and NFL Quarterback Tom Brady exacerbated. Daniel gets rave reviews from all clients, some of which include kids and grandkids of other former professional players. He also boasts one of the highest counts of 5-star reviews in the nation.

Overall, has it been relatively smooth? If not, what were some of the struggles along the way?
I tore my ACL and MCL when I was 23 years old which put a damper on my MLB career and although I still played professionally after that in Mexico and overseas, it just wasn’t the same. But I learned from that and now spend the first half of all my lessons teaching kids proper warm ups and injury prevention. Back in the day private coaching wasn’t what is today, Kids are starting much younger now – the majority of my clients are in the 6 to 10-year-old range for baseball and softball because as everyone now knows, it’s better to start your kids young.

Please tell us about Big Leaguer Baseball.
Big Leaguer Baseball specialized in the 5 tools of baseball/softball for position players and proper mechanics and arm care for pitchers and position players. I’m known for drastically increasing the athlete’s performance in as little as 1 lesson. I’m most proud of the number of athletes I have helped through my company and plan to help so many more. What sets me apart from other coaches is that I train alongside the athlete, I still play baseball and am one of the best hitters and pitchers in the league.

If you had to go back in time and start over, would you have done anything differently?
If I could do things over, I would have had my parents hire me a private coach from the day I was born, lol. I’ve been working with my 1-year-old son on his game and he can already throw a baseball over 4 feet. He has the game in him because we started from day 1.