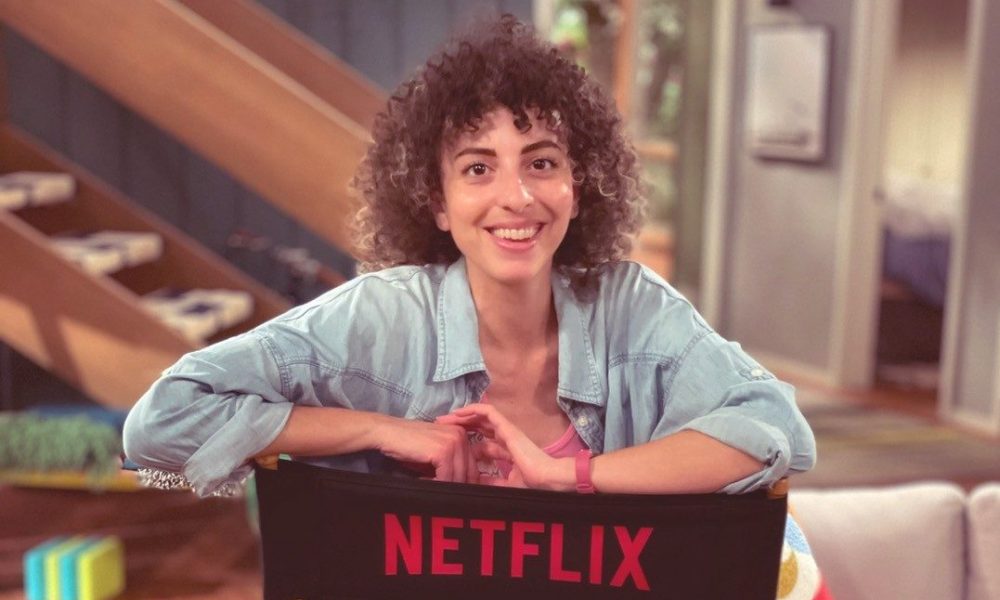 Today we’d like to introduce you to Cristina Fanti.

Hi Cristina, so excited to have you on the platform. So before we get into questions about your work-life, maybe you can bring our readers up to speed on your story and how you got to where you are today?
Well, I start in Rome, Italy. As early as any of my first memories, I watch Back To The Future, on the floor of our living room, and I’m like, zapped from the heavens. There’s certainly humans who are responsible for making this thing that is sending me on whirlwindy adventures without ever moving, I think. Whatever that job is called, that is what I’m doing. I have never not been that person since. I studied film in college in Rome but never really stepped away from that idea that most of the movies I grew to love were made in this one place and that it made sense to be there for me. So when I graduated, I packed a bag, alright two, and flew to Los Angeles for a very specific workshop in a very specific craft that I had discovered in one of my college classes and that I had bonded with profoundly, Script Supervising. Turns out, I was really good at it. The grind was tough, but somehow a lot of pieces started falling into place like this was meant to be. In under two years, I had worked on enough projects that I was able to join the Union, and as the projects grew bigger so did the conviction that I had made the right decision. I had the best Script Supervising teacher, and I always tell her I owe her everything, but also my passion for this industry and my conviction in achieving this idea of making films for other kids to dream about has really set a high bar for me to give my all every day. And that I have done.

The more time I spent in Hollywood, the more I realized people get used to the lifestyle, and I made a promise to myself very early on that I will never allow myself to be jaded of any of it. I left my family and my land that I love for this chance and it is only worth it if I am in its full-body, heart and soul. I celebrate ten years of moving to Los Angeles this year. Just last month, I shot my 150th episode of television on top of 20+ feature films I’ve worked on throughout the years. Earlier in the year, I was also invited to join the Television Academy and became a juror for the 73rd Emmy Awards. It is an incredible achievement I am extremely proud of. Being a first-time Emmy voter, such a prestigious, world-renowned award, on the 10th year anniversary of stepping out to follow my dreams is the best way to celebrate. And also an unbelievable milestone to round up to the next chapter, proving that there is something big truly worth pursuing out here for me.

Can you talk to us a bit about the challenges and lessons you’ve learned along the way. Looking back would you say it’s been easy or smooth in retrospect?
If you’ve ever watched a behind the scene featurette for anything, you will probably have heard someone complain about the long hours. Filmmaking is a very demanding and physical profession. First of all, our regular workday is 12 hours, plus an extra 30 to 60 minute lunch break and your commute to work each way. That is excluding overtime, and we go on overtime often. Gotta get that shot! Also, very early call times can follow a full night shoot, one day you may start your 12 hour shift at 6am, the next at 6 pm. It’s very disorienting. With very little math, it’s easy to see that we don’t get a lot of rest, time for our families, or self-care. And our bodies start refusing to cooperate very early on. Most people stand all day, sometimes under the burning desert sun for hours, without a bathroom break or a bottle of water nearby.

On busy days I’ve only been able to use the restroom once at lunch (that’s 6 hours after the day starts) more often than I care to remember. And by restroom, I mean a porta potty, but sometimes it’s a bush, you know, whatever is closest. If you get to sit because your craft requires writing, like me, you don’t have a desk and an ergonomic office chair, you grab a director’s chair (very uncomfortable seats if you’ve never tried one!) and hunch over the best surface you can find for the next 12 hours. If you’re lucky, you’ll have some picnic tables to eat your lunch, otherwise you sit on the floor where you can. A film set first thing in the morning is a slew of people comparing notes on just how much back pain they’re in! It is a struggle and definitely a source of concern. And a very relevant topic these days. Our great entertainment Unions are in the process of negotiating for more reasonable rest periods in the industry as a whole.

In addition, most times we’re not aware of what our schedules will be like until a few days beforehand, and even then something could go wrong on set that day so we have to stay longer to make up for it. Not having time to take care of the most basic life needs is definitely a setback of this career. Doctor’s appointments, friends’ birthdays, any kind of planned events, sometimes even showers, are hard to wrangle. It’s a draining, alienating job, you really have to love what you do to keep going. And thankfully, I do.

Appreciate you sharing that. What else should we know about what you do?
Script Supervising is a tough cookie to explain. But it always gives me great pride and joy because it is arguably one of the most important professions in filmmaking. The easiest way to describe it is by separating what we do into two categories. Note-taking and continuity. Let’s start with continuity. You may or may not know that a movie is shot out of order, most of the scheduling is based on location. If we’re on a certain set that one day we’re going to shoot all scenes that take place in that set throughout the film, regardless of whether they are at the beginning, middle or end of the story. That’s when costumes, props, hair and make up all have to match seamlessly with the scene that comes before or after, which will be shot at a different location and therefore a few days or weeks from now.

Script Supervisors are in charge of making sure all departments are on the same page and we constantly double-check all aspects of the scene as the day goes along to make sure everything is as it should be. I cannot tell you how many times a person drinks a sip of water in between takes and leaves a bottle in the middle of the set. And now with covid, there’s even masks popping out everywhere. Remember the coffee cup in that banquet scene in Game of Thrones? In addition throughout a film there may be some key objects or concepts that carry through from beginning to end, and we track those and all the logic behind them, before and during production in a breakdown of the script. Think of the One Ring with Frodo. During the film as we’re going from scene to scene, where is the ring? Is it around his neck? Has he put it in his pocket in the previous scene? Did Gollum not steal it on page 9? Who has it now? All those questions come to me, and I have to have the answers.

Also, there’s the more widely known aspect of reminding the actors with which hand they’re holding what from take to take, or on what line they started sipping that delicious empty cup of tea. And if an actor forgets a line during a take we’re the ones feeding it to them. No one else. That is a sacred rule of filmmaking!

The second aspect is note-taking. We are the eyes and ears of editors, who are often not on set, as they are at their editing bays cutting the footage. As the scenes go along, we draw lines on the script which function as a road map for the post-production team to find what they need to assemble the film. I write all sorts of interesting things in there for them. Please use this take because someone left a coffee cup on the banquet table in the previous one!

Without my notes a film would be extremely hard to assemble, and it would take forever.

Because we are the keeper of all the knowledge of the film, past, present and future, everybody needs us. We work with all departments, cast, executives. Directors will often not move on from something until they have confirmed with us that we got everything we needed and everything matched and is usable towards the final edit. It is a very demanding job but very rewarding, as there truly isn’t another person that is so entrenched in the artistry of the filmmaking process besides the director. Directors and Script Supervisors are a band of brothers.

What I’m the most proud of is that in ten years, I went from a hopeful student fresh off a plane from Italy to working with Chuck Lorre, the most prolific TV producer and creator, for the second season in a row, with his entire production team telling me that I am the most sought after Script Supervisor in the business and they will never work without me again.

When you’re able to sit next to and create with icons like Jimmy Burrows, what else is there to be proud of you know? I was in my room in Rome when I was watching all the episodes of Friends that he directed, and now I get to advise him on whether he has all the pieces of the puzzle he needs to make his tv magic. Having directors like Phill Lewis and Pam Fryman say they have never worked with anyone so knowledgeable and that makes their job so easy are really moments that help me make good to that promise I made myself all those years ago. How can I be ever jaded by this?

What sets me apart, and I quote, is my extraordinary talent and filmmaking knowledge and my killer outfits. I am Italian after all!

We’d love to hear about any fond memories you have from when you were growing up?
Watching Back to The Future on our living room floor of course! It’s opened this incredible path for me to do amazing things that I could have never imagined. Thank you Doc Brown for showing me what my future held <3 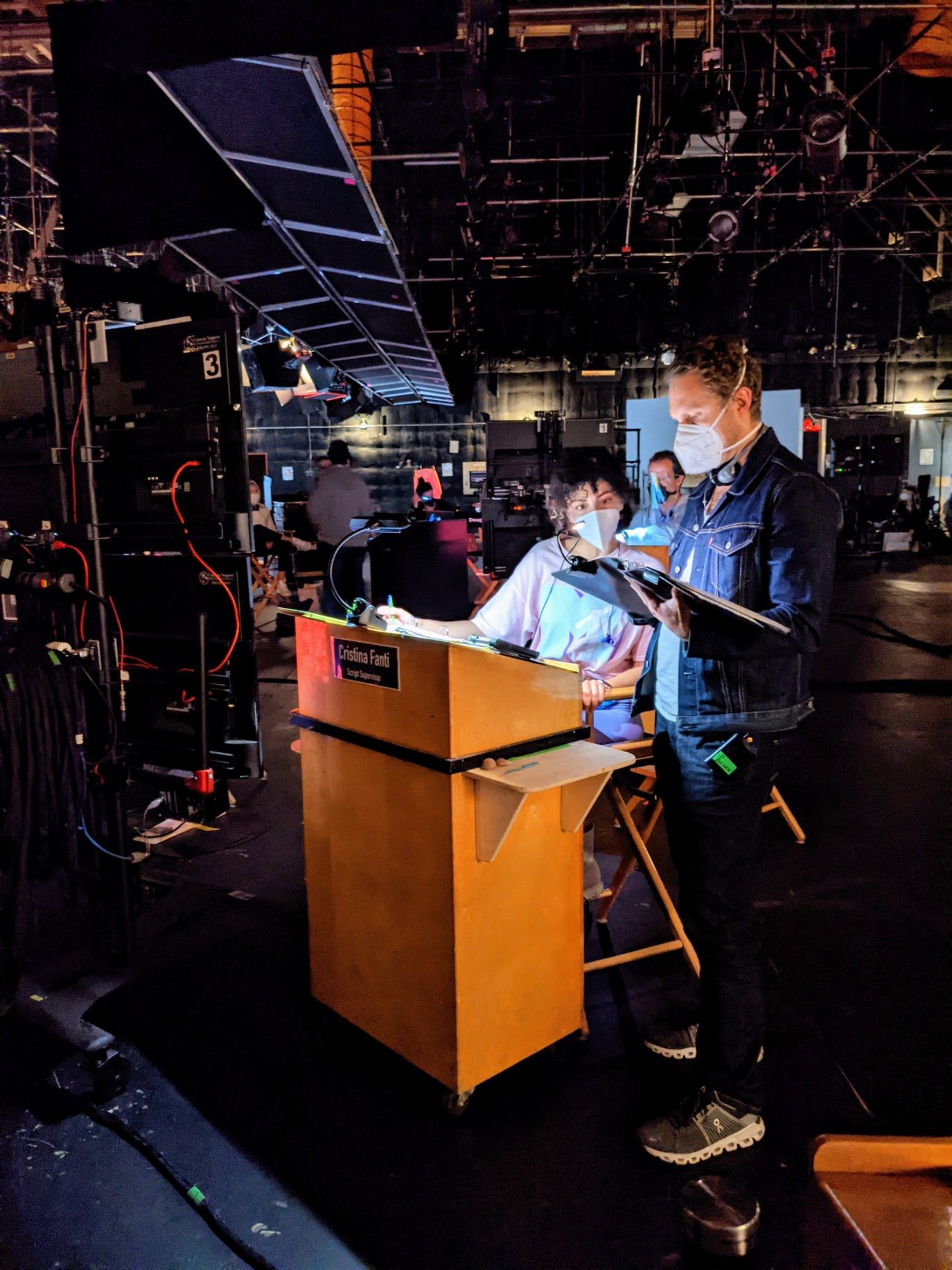 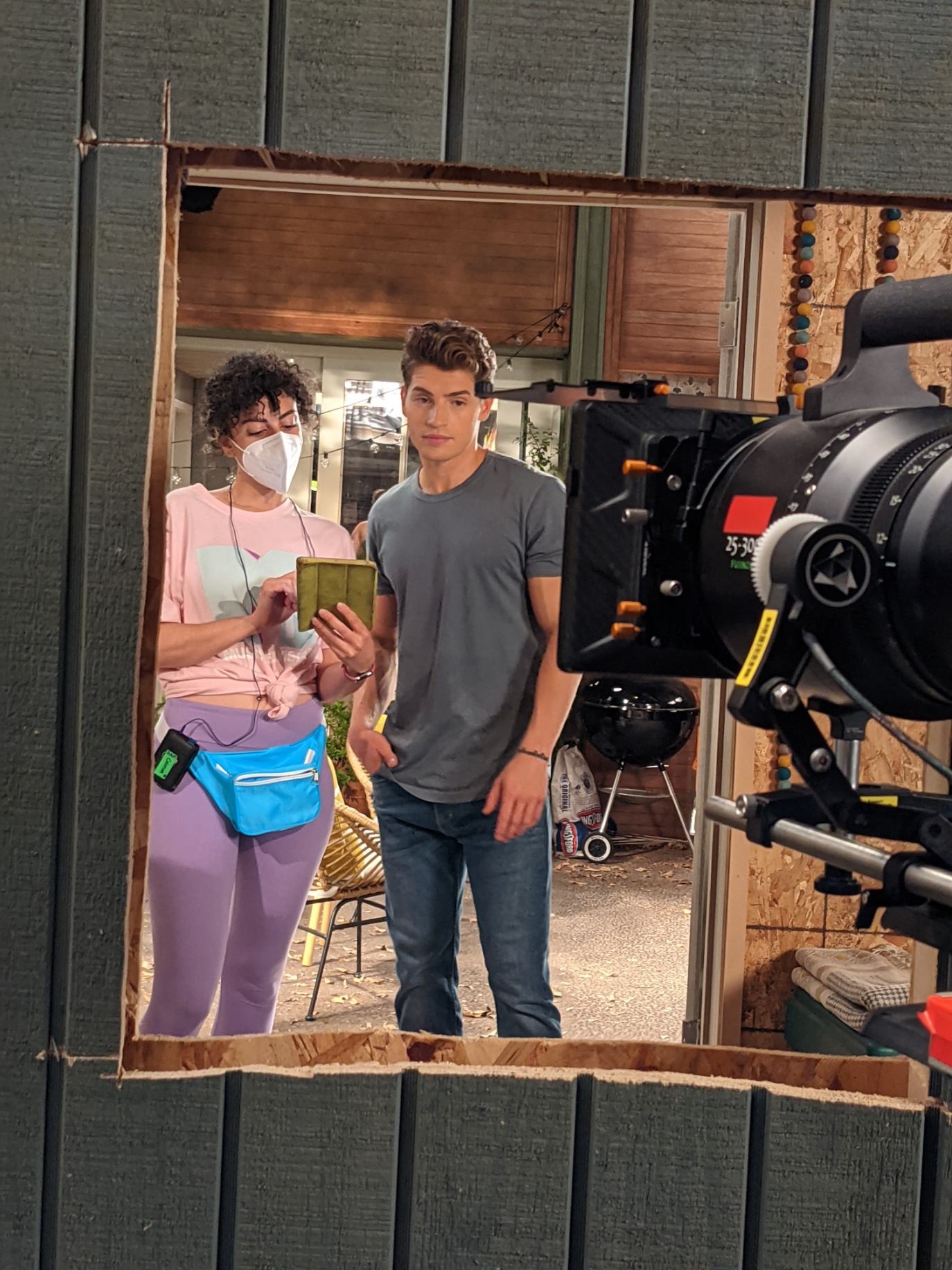 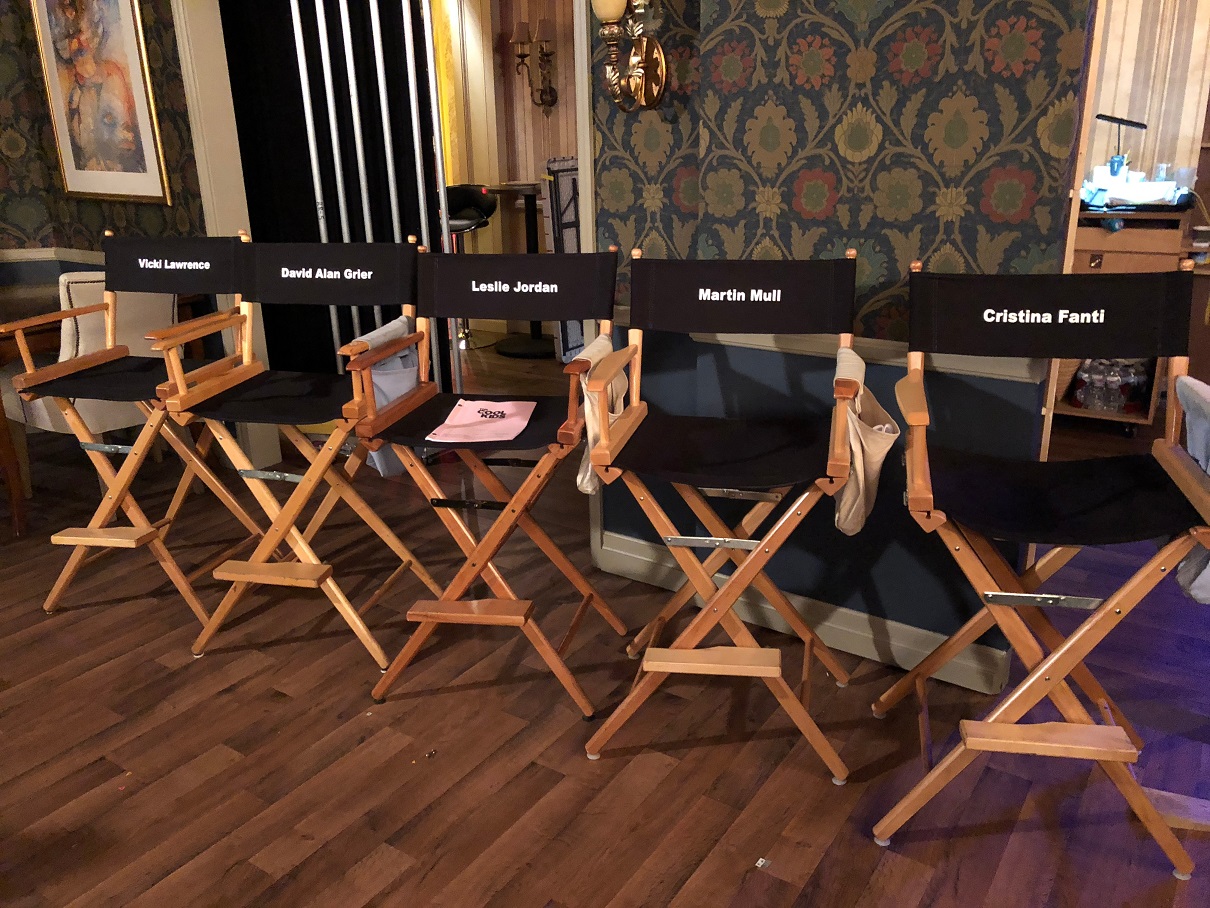 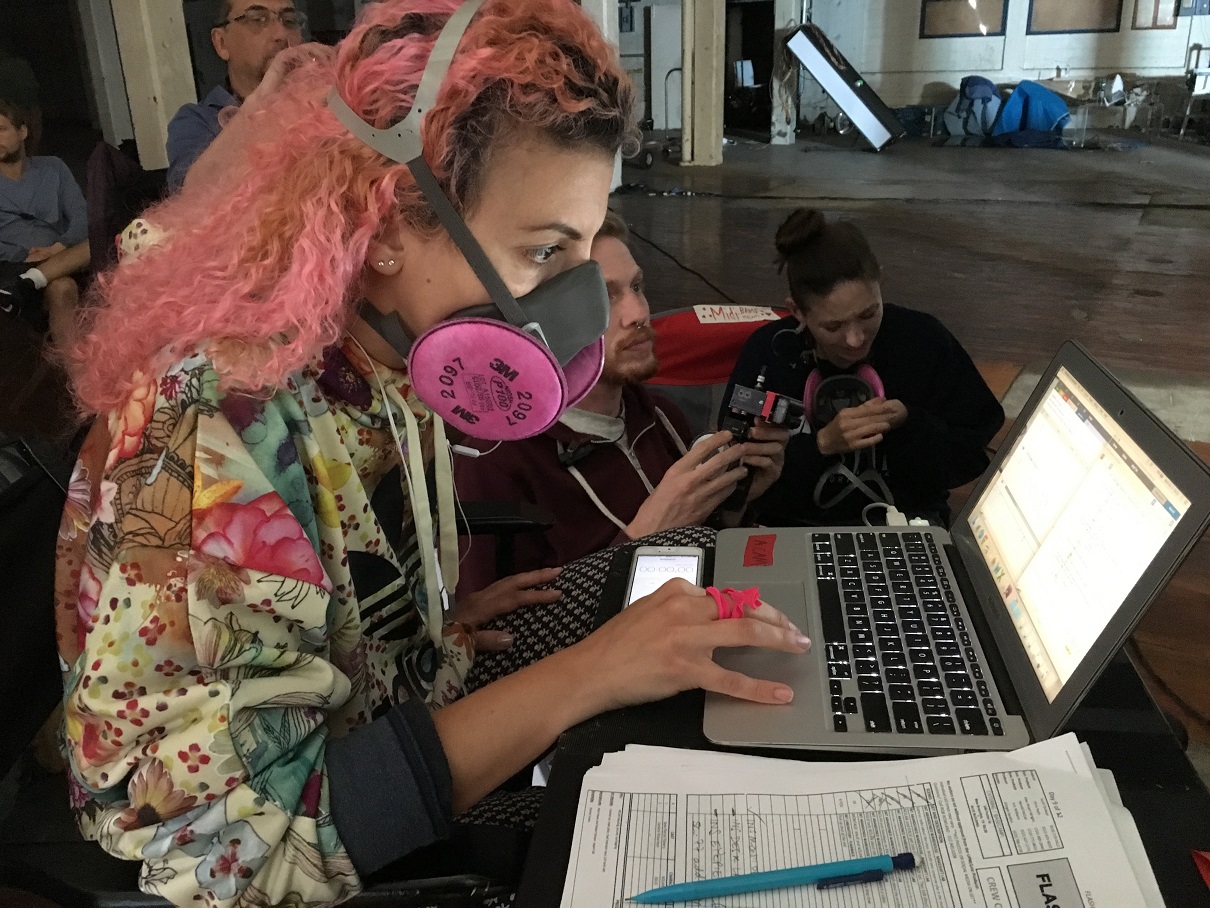 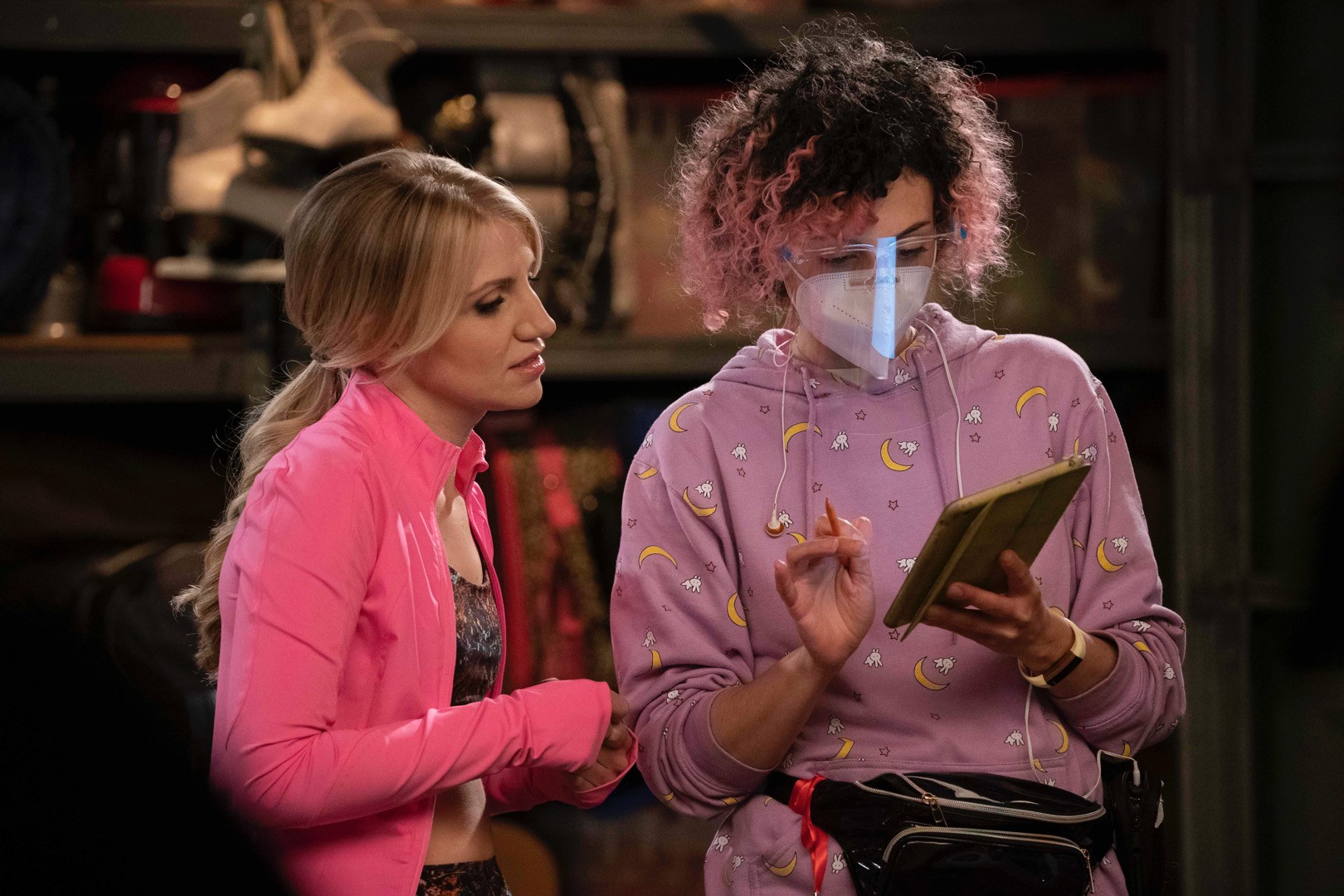