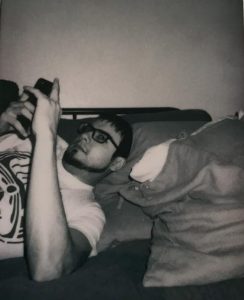 Today we’d like to introduce you to Corey Kleinsasser.

So, before we jump into specific questions, why don’t you give us some details about you and your story.
I have always had a passion for writing and music and always wanted to combine the two. I went to school for journalism and have always had a knack for writing in general. All throughout my college years, I was going to shows all over Southern California for artists that I knew and loved.

Then, for one class at the school I was attending, Cal Poly Pomona, I took a class where we had to create blogs and write on one specific subject the entire quarter. We had to pitch our teacher at the end of the first week and she had to approve our content subject. I was already planning on attending various concerts, at least one to two every week that quarter and the rest is history. Someone the previous quarter had the name “Concert Schutff” or some other deliberate misspelling of “Stuff” and I knew even if I had the correct spelling, it wouldn’t be such an exciting name. So I figured “Crap” is good enough to be an attention grabber, and yet again, the rest of that is history.

When people first hear the title of the website, “ConcertCrap.com” it is always a vocal double take. “What did you say?”, “What is it called?”. I’ve heard it plenty since it’s inception more than six years ago now, and love that the name has stuck.

After the class ended, I knew I wanted to continue running with it and I did. I combined my knowledge and love for music and just continued to push posts month after month, week after week, day after day. I even started interviewing artists and musicians I know and love from some of my favorite bands. All I did at the start was email them and ask. Most were into the idea or just say a polite “No”. It was definitely difficult at the beginning, but not as difficult as you may think. One of the first few bands I interviewed was one of my favorite hardcore bands, Stick to Your Guns, based out of Orange County.

I even had the opportunity of interviewing my favorite band in the world, well the drummer of my favorite band of all time, Thrice. I interviewed Riley Breckenridge during the band’s hiatus from Thrice a few years ago about his side project at the time, Puig Destroyer. I talked to him over the phone about that project, our love for baseball, the Anaheim/Los Angeles Angels, and even when Thrice would be returning.

I have interviewed countless bands and musicians since then including: Fit For a King, Beartooth, Escape The Fate, Nonpoint, War of Ages, Young Guns, Red Sun Rising, and countless others.

One of my Concert Crap interview highlights is interviewing 19, yes “19”, artists and bands a few years ago at the Vans Warped Tour in Pomona on that single day. I had no idea what I was in store for that day but I pounded out all of those in about a 6-hour frame. Needless to say, is that I had no idea what to expect when I filled out the application but I was so glad that I did it.

Last year I was able to interview Sid Wilson, AKA Sid The 3rd from Slipknot about his solo album. Concert Crap was the ONLY outlet who interviewed him for that release last year, which is also pretty damn cool to think about. I spoke to him on camera for more than 2 1/2 hours on his album, his early days in music, his love for Transformers, cannabis, and tons of other things. It was definitely one of my proudest moments for the website.

I also run ALL of the social media accounts by myself on Instagram, Facebook, Twitter. Those three accounts combined have more than 45,000 collective followers and I grew all of those organically, never once paying for an ad. I am proud to have grown a small school project into a website and social media people know and can trust in the music industry.

Overall, has it been relatively smooth? If not, what were some of the struggles along the way?
There surprisingly haven’t been too many struggles. People in the music industry are very open and very nice and everyone knows each other. I haven’t come into too many obstacles.

People have been very open and helpful in the industry. I thought it was going to be a lot more difficult but it has been very easy. It just takes a lot of time and dedication to doing what I do.

Concert Crap – what should we know? What do you guys do best? What sets you apart from the competition?
We specialize in music coverage of all kinds. We cover live shows, festivals, tours, etc. We post news about tours, shows, have interviews with bands and individuals in the industry. We post engaging and sometimes funny and exclusive content others may not have.

I feel like we are set apart from the rest because we have a large number of contributors to our website, where people have a strong skill to put the best content out there. It takes hours to cover events and more hours to push out the content and I am proud as hell of all of them because I know the time and effort it takes to push out something that you love and want others to marvel at.

I also think what sets us apart is that I am very open when it comes to creating content. I don’t want to be the same old music blog doing the same thing every other site is doing. That is why I will sometimes pitch my team and event representatives of being as creative as possible when it comes to coverage. Because if we’re not different and unique, we’re all boring and the same. Be different, be unique, be fun, be engaging, be you. You want to stand out from the rest and have people remember you the next time they want coverage for something.

What is “success” or “successful” for you?
I define success as doing what you love and not having anyone tell you otherwise. If you are at a position where you can freely state what you want and have others take you seriously, you have made it in life and made it within yourself.

Push that success not only onto yourself but onto others as well and be successful on a team.