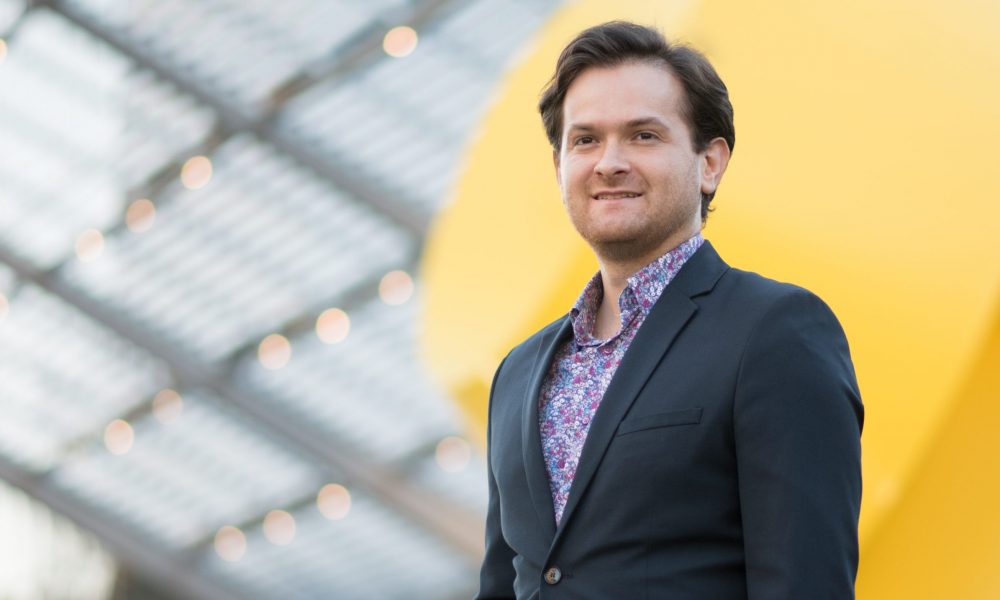 Today we’d like to introduce you to Cristian Coldea.

So, before we jump into specific questions about the business, why don’t you give us some details about you and your story.
I’ve always been artistic – I still remember drawing at the age of 3-4 with my grandma, and basking in the admiration of adults who said my work was far above my years. I’m sure everyone’s family says that. But in my case, they saved my artwork to this day — and I gotta say, I really was good.

I was “discovered” by my art professor in middle school and he pushed me to go to a visual arts high school. This was back in Romania in 2001, where I was born a few years before the fall of Communism. The high school prepared me to attend a university — not only in the area of fine arts but all the liberal arts and sciences, as well. I really loved sculpting, but ironically, I am allergic to dust. So I was compelled to move into a much cleaner artistic environment, and I chose graphic design. In Romania, especially back then, the focus was on hand-drawing using the classical techniques from the 16th and 17th century, learning calligraphy, and using a printing press like in the 1400s.  Practicing the sequence of design and printing techniques from those early centuries was like a walk down history lane — before being “officially” introduced to computer-based graphic design. Of course, I had been toying with computers since they first came on the market in Romania as I was entering my teen years.

During my undergrad, I continued in graphic design, eventually earning a Bachelor of Fine Arts, with an emphasis in Drawing, Painting, and Printmaking. During this time, I landed a scholarship in Vilnius, Lithuania. In 2009 I began my Master’s degree in Drawing, Painting and Printmaking. Traveling through Poland, Hungary, Slovakia and eventually returning back to Romania made me realize the opportunities for me in Eastern Bloc countries would be very limited. A year later, I visited my sister in the U.S., she was studying for her MBA. I realized, like so many other artistic entrepreneurs before me, that THIS was the land of opportunity. In 2007, I went back to Romania to finish my Master’s degree, and then returned to the U.S. in 2010.

At the end of 2010, Daniel Druhora, a student at USC School of Cinematic Arts, was working on a film about Romania, “Elie’s Overcoat”. It’s the story of his wife’s grandfather, who helped hundreds of Jews escape from Nazi-occupied Romania, enabling them to avoid deportation to concentration camps. Daniel needed someone to help deliver the story, someone who could not only gather historical information, but also had the skills to illustrate and visually present the project, so I became involved with the film. I even got wardrobe to be donated to the project. That’s basically how I ended up in LA, working in the film industry. It was the first project where I was directly involved in the production of a movie, from the screenwriting, to pre-production, then post-production including editing, color-correction and voice-overs, and finally screening. One project led to another, then another, over the course of 5 years.

This was a pivotal time in the LA film industry as digital movie-making technologies were quickly reducing the cost of producing a movie. Back in the day, you not only needed a large and costly crew — a camera and lighting department, a sound department, an arts department and so on — but super-expensive cameras and other equipment. If you wanted to own a production company, barriers to entry were high. But as technology has brought these costs down, if you have talent and skill, and a great story to tell, you can really make an impact now. Which is exactly what I wanted to do.

A series of great projects over 5 years provided the experience that fueled my passion and vision for storytelling. And that’s how I made the decision to start my own company.

Overall, has it been relatively smooth? If not, what were some of the struggles along the way?
1. First, learning the culture. I spoke English fluently when I first arrived in 2007 (in Romania, we started learning English in the 2nd grade and I went to an English-language university where I also studied political science for a year). But learning all the nuances, the allusions — that came quickly once I became part of the film scene in LA. Working on film sets with production crews, actors, film writers, directors and producers over a series of long days and weeks was a real accelerator. So were all the stimulating conversations that followed in diners and coffee shops in the wee hours of the morning after a long night of shooting — such as at Verve Coffee in West Hollywood, Blue Bottle in Beverly Hills, or Intelligentsia Coffee in Silver Lake. What a great bunch of people!

2. Deciding what to FOCUS on. When you come to LA initially, you come with a big idea of what you want to be. An actor. A writer. A director. For me, it was to be an ILLUSTRATOR or animator. I started in the art department, because that’s what I knew. I was a storyboard artist, and I even painted the poster for the movie Elie’s Overcoat and a few other short films. Then, through experience you find yourself changing. I’m a very social person and was constantly craning my neck to learn every other person’s craft, during breaks and after hours. I was always communicating with other crewmembers, to learn the business. I remember on one set, a film DP (Director of Photography) finally saying to me, “Just focus on your own craft. Don’t try to know too much about other people’s jobs.” I realized that I’m not a guy who wants to be put in a box. I don’t like to just specialize in a narrow field. I like to know EVERYTHING. To DO everything. Once you learn everyone’s job, it becomes easy to hire the right people and to manage a crew well.

3. I won’t even mention getting funded, because that’s the same story for every creative type, isn’t it?! Making contacts has always come easy to me. I feel very blessed in that sense. People seem drawn to the opportunities I create. Even when I decide to do something just for fun, simply to experiment or keep my creative instincts sharp — such as my video “Powerful” with ballerina Nikiya Palombi, shot in front of iconic LA landmarks like the Disney Concert Hall, Griffith Observatory, Santa Monica Pier, the Korean Bell of Friendship, and LACMA’s Urban Lights. https://www.youtube.com/watch?v=Agi_K39O0Do

Please tell us about Coldea Productions.
I help businesses tell their stories. I enable clients and companies to brand themselves, to FIND their unique, compelling story — and then TELL that story in a way that is authentic and captures the heart of their audience Not just their wallet.

My team and I do this by offering a suite of service options, ranging from conceptual design to final production, from script development and photography, to videography, editing and post-production delivery.

Currently, our biggest clients are in the financial services industry, real estate, medical services, and manufacturing. For example, in financial services, our clients range from UBS to the Association of Certified Fraud Examiners, for whom we tend to focus on commercials, client presentation videos, and corporate training. We tell the stories of premier medical service providers, from brain and spine specialists to hospital systems like St. Joseph. We’ve filmed pop bands like Maroon 5, offering aerial/drone photography and videos. Earlier this year, we became a preferred vendor for USC (University of Southern California).

We make it a point to quickly learn about each client’s industry, as well as their specific products and services, so our team can truly deliver on our central promise: “WE BRING YOUR BUSINESS STORY TO LIFE”.

If you had to go back in time and start over, would you have done anything differently?
1. It’s important to know who you are, and what you’re good at. Know your strengths — which also will guide you when you need to bring in a specialist for the team, or partner with an expert in a particular niche.

3. Keep an open mind, and an open heart. Don’t assume you know it all. When you keep your borders open, it’s true that you risk getting hurt — but you also get tremendous experience and valuable insights. Even if you receive an insult, learn how to filter it so you can get some value from it … because there’s a grain of truth there. People don’t always know how to express themselves well, so you must learn to understand where he or she is coming from, to see what he’s seeing.

4. It’s up to you how you choose to process the information that comes to you, and how you choose to respond to it. Learn to take the good from every situation and carry that forward, while leaving any negativity behind. To be happy and positive is a CHOICE we need to make every day. This is how you shape your character, and in a sense your character becomes your destiny.

5. You don’t need to land every deal in order to be successful. It’s important to wait for the RIGHT clients. It is better to say no in some cases, and point them to someone else who might be right for their budget, than to accept an opportunity that you sense might not be an ideal fit.

Image Credit:
All photos are property of Coldea Productions