Meet Clint Foley of Up Next Productions 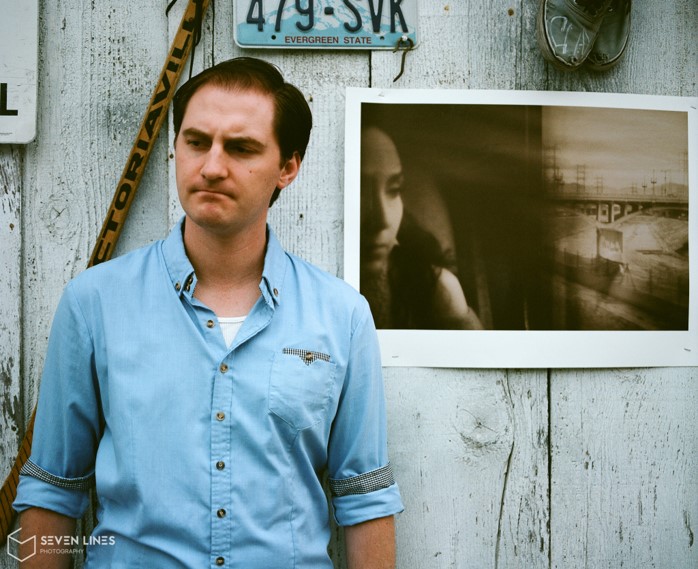 Today we’d like to introduce you to Clint Foley.

Clint, let’s start with your story. We’d love to hear how you got started and how the journey has been so far.
To start at the VERY beginning, I stumbled into acting through a Valentine’s Day play in kindergarten, in which I played the roguish Knave of Hearts at the center of the dramatic conflict. When that show closed (i.e., nap time), and ever since, I’ve been fortunate enough to let my interests lead me down different paths and ultimately to whatever causes the most joy.

In school, I was simultaneously in metalworking, varsity cheerleading, choir, and drama, so at the very least you could say my passions were varied. I chose to enroll as an “Arts – Undeclared” major at the University of California, Irvine, without having a long-term plan or even a dedicated field of study.

Luckily, most straightforward questions have a straightforward answer, so I had to chat with myself and check in with what I enjoyed the most: How can I do more dramatic acting? Well since I’m already at school, I’ll become a drama major. How can I get involved in more shows?

Since the classes are available, I’ll expand my technical knowledge of stagecraft. How can I continue working with my talented friends and peers? I’ll become a director and hire great people. I had never imagined a plan like that, but it happened anyway. I was enjoying the work, the people, and how I was spending my time. So school came to an end, and after a handful of wonderful shows and memories, I had to check in with myself again:

Now that I’ve graduated, how can I keep doing this? Well… I overthought that last question for a few too many years, and over a few too many part-time jobs. I had stopped letting joy lead me. I had planted myself in a pot that was too small, where all I could do was wait for nutrients to come to me while I dreamed of joy, all while my roots were withering. It took too long for me to answer my own question:

How can I keep doing this? Well, my knowledge hasn’t gone anywhere, my talented friends are still working, and I definitely don’t have fewer resources than when I started college, so I’ve just got do the thing! So I did a couple of things! I interned with Center Theatre Group and developed engaging and interactive lobbies for audiences of the Kirk Douglas Theater.

I assisted for two of Orange County’s most-renowned showcases of live entertainment: South Coast Repertory and Chance Theater. I gathered some friends into a performing clown troupe and put on shows that I guarantee no one was expecting. And I finally returned to one of my joys: directing theater. Over the last two years, that particular passion has compelled me to create a new theatrical company: Up Next Productions.

Up Next Productions began humbly as a handful of meetings over coffee with old schoolmates. We wanted to keep working on productions together like we had at UC Irvine, but the chances of all auditioning for one single show AND all being cast were slim. The simplest solution was to take out that chance and put up a show ourselves.

Our first project as an unofficial company was a staged reading of the musical “I Love You Because,” and although the audiences were mainly our extremely supportive friends, family, and agents, we were eager for more opportunities to collaborate.

I found that opportunity at Chance Theater’s 2018 Chance-a-Thon, a two-day fundraising festival in which local artists can raise money to perform whatever their heart desires, and audiences can “marathon” their support of the theater by watching all the performances! With nothing to lose and charity on our side, I wrote a Dungeons & Dragons parody musical called “Chances & Chalices.”

It was a success: we raised money for the theater, we sang our little hearts out, and our audiences had nothing to compare it to so they couldn’t help but love seeing something so different! With a fun experience behind us and a desire to keep working together, the wheels kept turning for our team and I once again decided to follow my joy.

So here I am today: I’ve got a musical opening later this month, I’ve become a business owner, and I don’t want to stop anytime soon. Last year I wouldn’t have imagined any of this actually happening, but I’ve learned my lesson about overthinking.

We’re always bombarded by how great it is to pursue your passion, etc. – but we’ve spoken with enough people to know that it’s not always easy. Overall, would you say things have been easy for you?
For someone who doesn’t have to do manual labor for a living and has the luxury of pontificating over artistic choices, yes, it has been a smooth road. I’m thankful that I’m in a situation where I can have any theatrical opportunities at all, with a supportive family and network of friends and peers to rely on.

With that said, working in theater does not have to be a struggle. Things can be surprising, especially if you decide to just go out into the world and make your projects happen like I did, but no obstacle should be insurmountable. On my current project for example, simply the amount of money required to put on a minimalist fully-staged production was a surprise.

Whatever challenges I’ve faced, the most important fact is that the show goes on, regardless of the difficulties surrounding it. If I simply ask myself “What is necessary for the production to happen?” and meet those criteria, then my goal is already met. Theater is live and sometimes impromptu, which is why audiences continually choose it over TV or film. My personal reasoning then is that the production process can be just as flexible.

In fact, it has to be, to make up for the slings and arrows of outrageous misfortune that life tends to throw at you when you’re succeeding. Other companies whose goals may be financial or tangential to the production may see canceling the show as an acceptable loss. But I don’t accept that. The show will play, audiences will enjoy themselves, and most importantly, the artists will have their chance to showcase their work.

So back to the financial surprise. Because I believe in the team that I’ve asked to join me and Up Next Productions, I made some personal sacrifices to ensure that our actors and production staff can show off their expertise to the world without ever having to worry about whether they will or won’t have that opportunity. I am dedicated to building a foundation for future artists and for the fantastic people working with me now, even if that means I’ve got to go without more often than with. But again, that just fondly reminds me of college.

Up Next Productions is still looking for support if anyone is willing. The most important thing to know is that our first production IS happening, but with additional funding, we can improve the production and set groundwork for the company down the line. We’ve established a GoFundMe that will last through this production and into future projects.

This company is still new and doesn’t have a subscriber base to equal Center Theatre Group yet, but when it does, I’ll let you know. Until then, this is one way to support us between productions: www.gofundme.com/upnextproductions.

So, as you know, we’re impressed with Up Next Productions – tell our readers more, for example, what you’re most proud of as a company and what sets you apart from others.
Up Next Productions was officially established in February 2019 as a logical answer to a couple of logical questions: a company is required in order to produce certain shows and rent certain venues, so we made one! But I got to thinking that there is something more I can do than just provide opportunities for talented artists I know. Every household name you can think of had to start from somewhere. Whether they have been blessed with wealth or family connections or not, artists need an opportunity to be seen, and some unimaginably gifted artists never receive that chance.

Up Next Productions was created as a canvas for experienced but unsung artists to showcase their craft to the professional community. As an individual, I’ve been fortunate to have received support in seeking out my joy, but that is not the case for everyone. I’ve made a point to negate obstacles when I encounter them, and if there’s a way to support up-and-coming actors, technicians, musicians, and artists who could be just one step away from greatness, Up Next Productions will clear the way for them to succeed.

We would not be sad to collaborate on only one single production with an artist before they’re whisked away by the studios or Broadway; we’d be grateful to have witnessed their skill firsthand. Whether you’re fresh out of school with only a degree and a dream, or you’ve won an Academy Award but want to broaden your range, Up Next Productions wants to work with you!

So, what’s next? Any big plans?
For the immediate future, my first official show under Up Next Productions is [title of show], playing March 29-April 6!

This musical, based on the real-life events of the show’s creators, is the perfect choice of show for us to display our hard work as a company up to this point. It’s a unique piece of theater because it documents its own creation and points focus at some difficult questions like censorship and business vs. artistic expression, while also being hilarious for anyone who’s ever seen a high school production of “Annie.”

After that, well, you know I’m hesitant to make too many concrete plans, but we will have more theatrical productions coming later this year and next year! But what else we do really depends on what sorts of artists want to join forces with us: music, film, original works, or maybe more interactive media like escape rooms or video games are all interests of mine that may take the lead someday.

But for now, the future I’m most excited for is who Up Next Productions will meet and what work we’ll create together! You can always look forward to something Up Next! 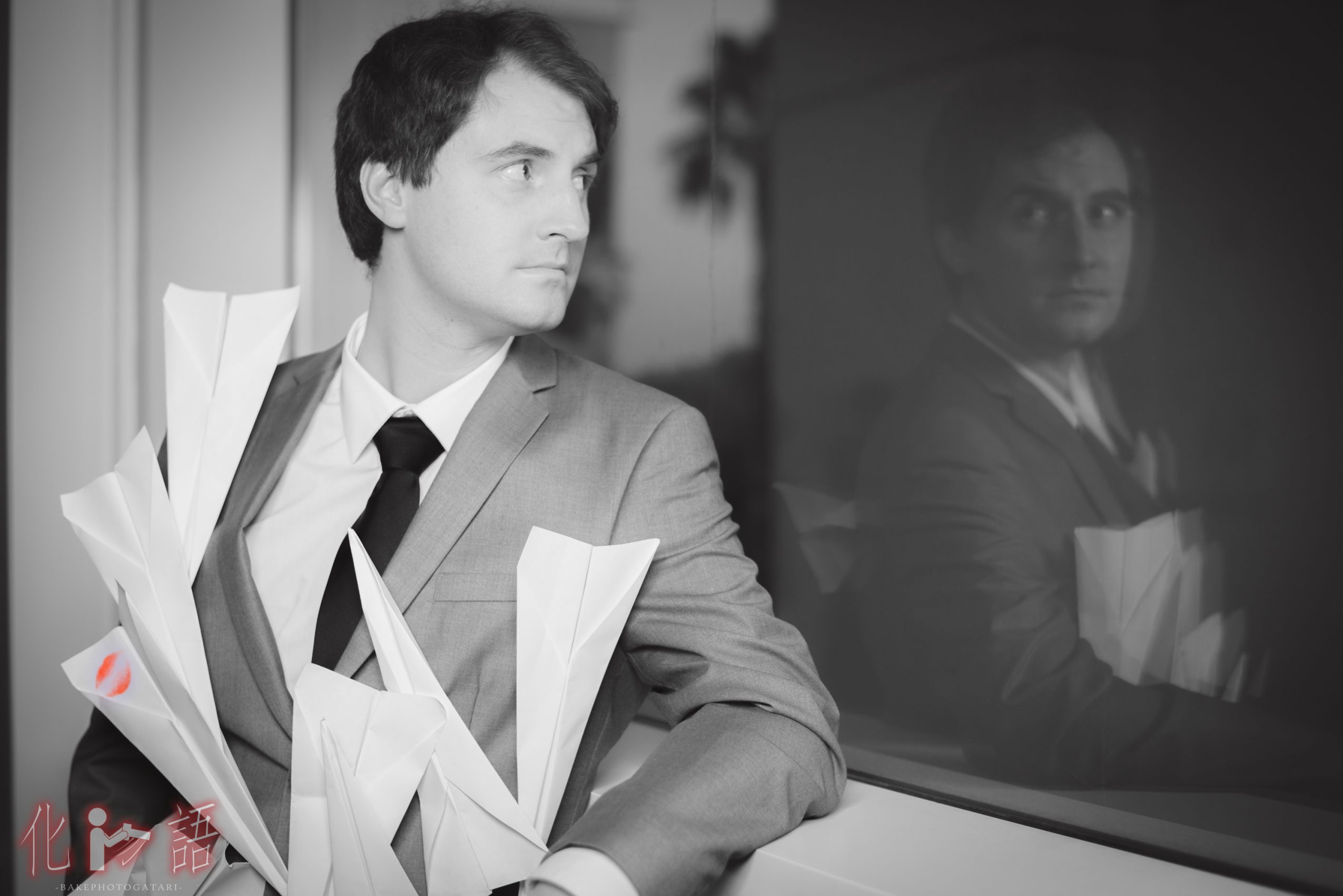 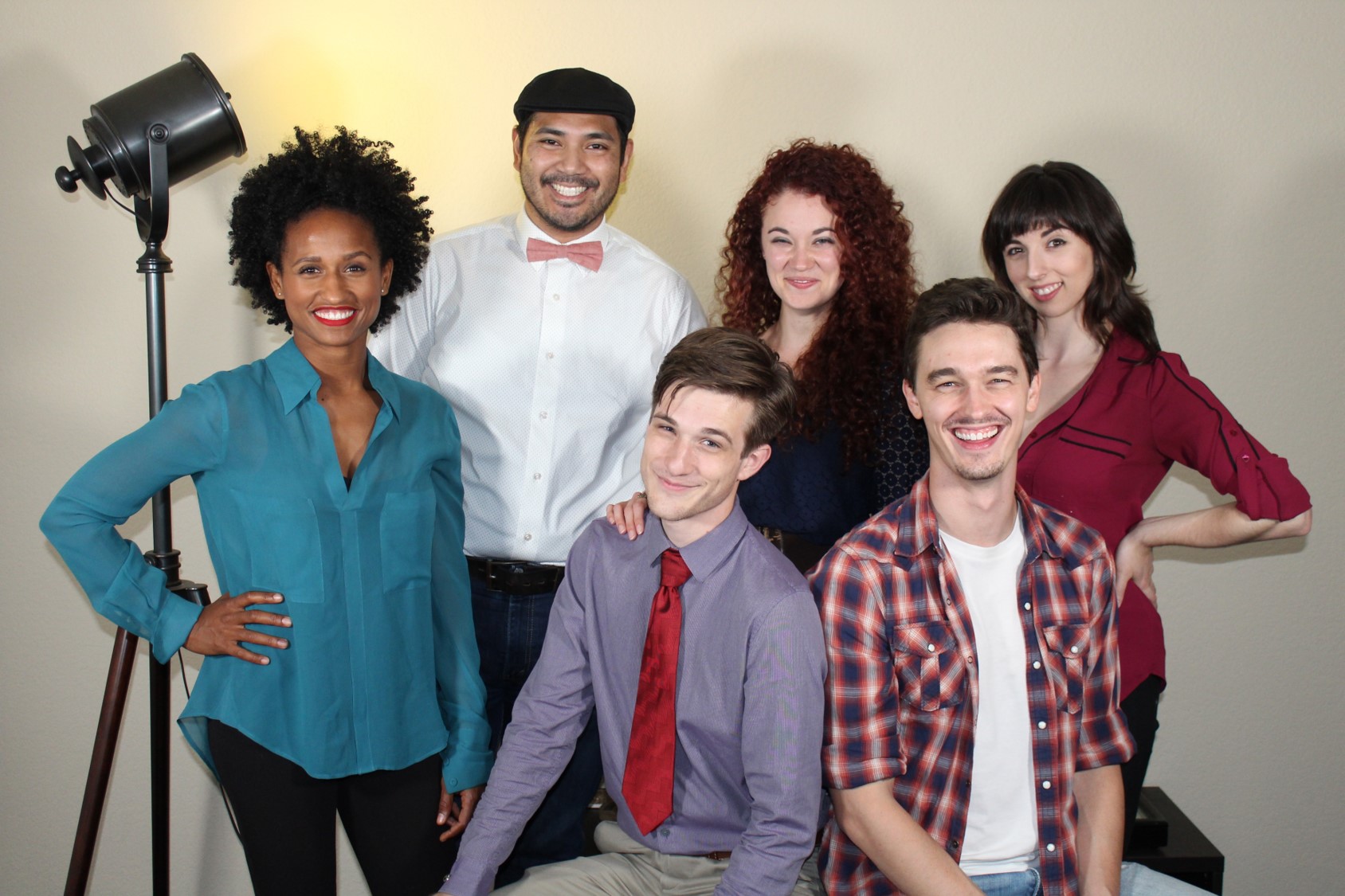 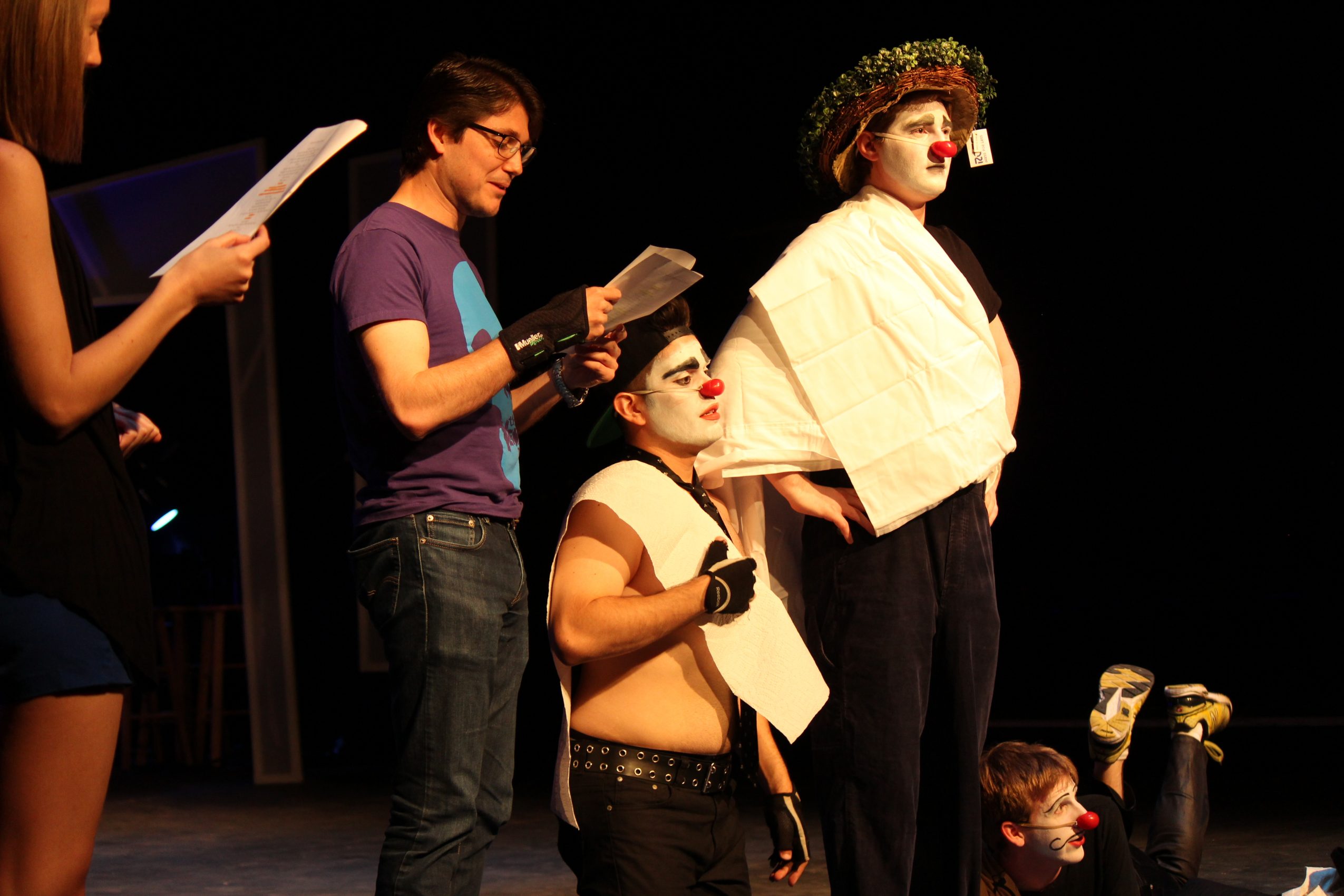 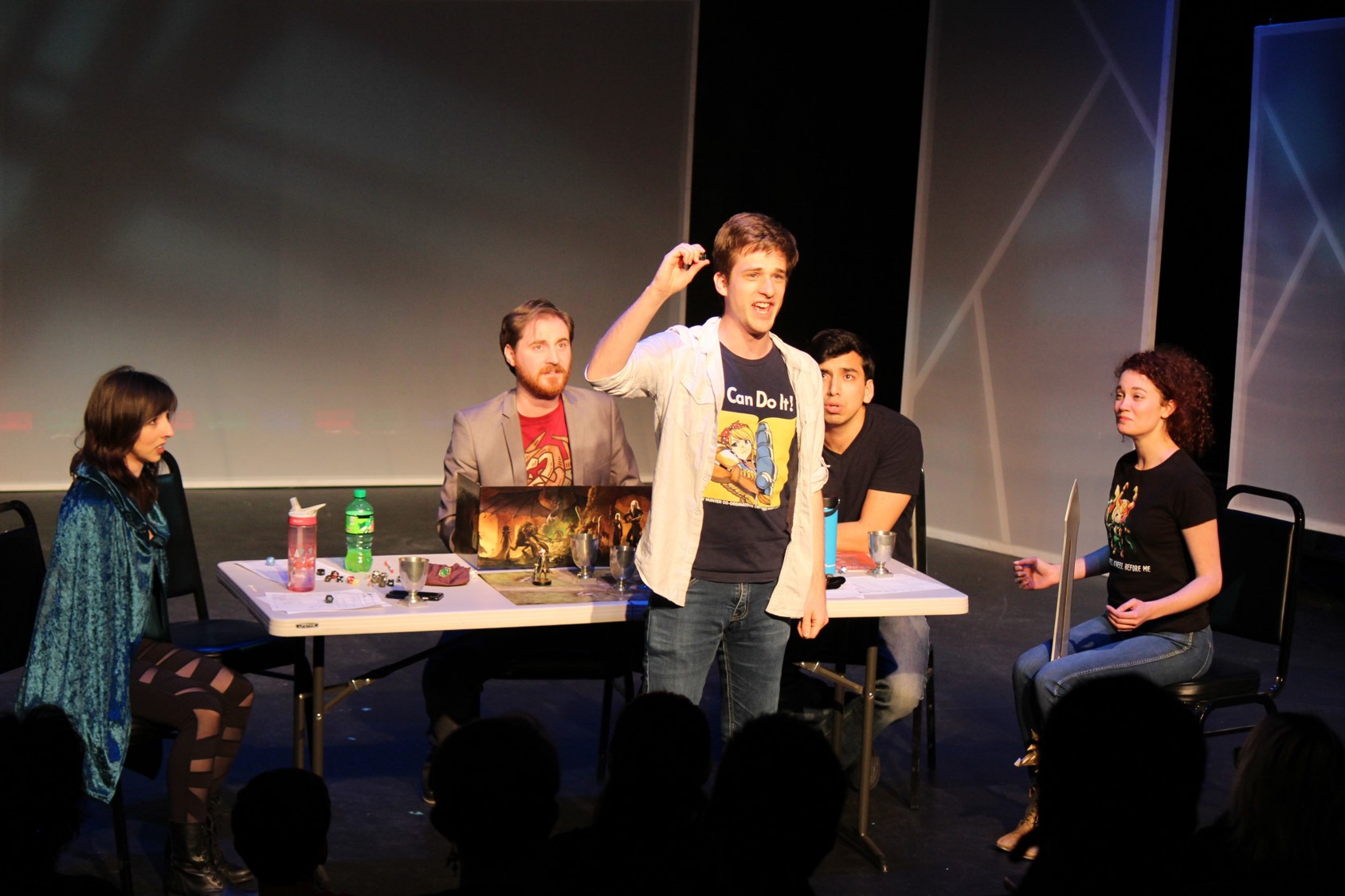 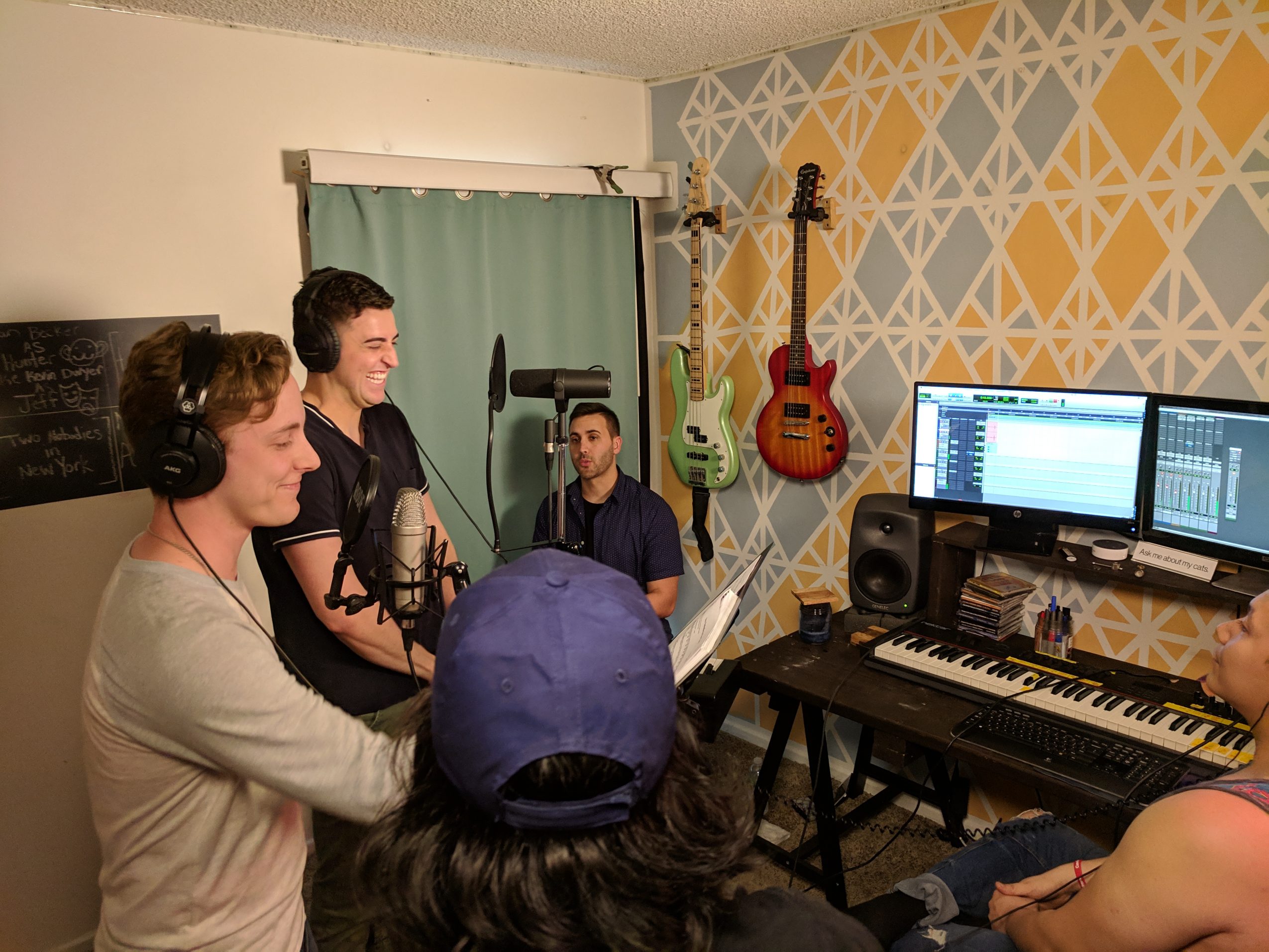 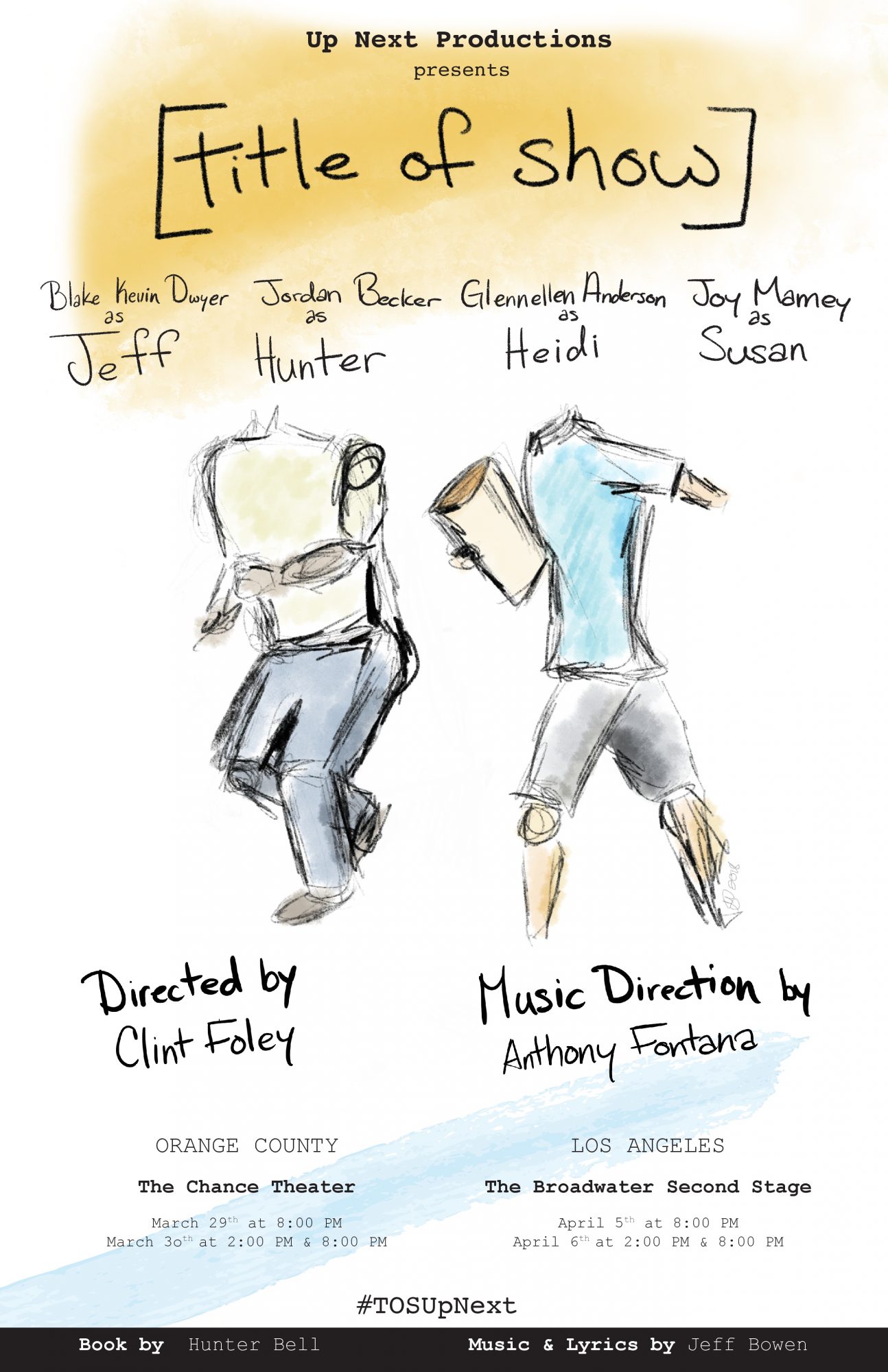