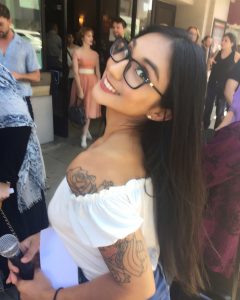 Today we’d like to introduce you to Cindy Kennedy-Gomez.

So, before we jump into specific questions about the business, why don’t you give us some details about you and your story.
Hi, my current name is Cindy Kennedy-Gomez but I was born Cindy Lopez. My family and I started like a lot of immigrant families. My parents came to the US at a young age, met and had 2 daughters.

My sister is older than me, so I remember her as the “lucky one” who would be able to go with my dad while pulling her red wagon filled with oranges to help my dad sell them on the street. As a family, we would also go to the beach and dig in trash cans for cans to sell so we can get extra money. At the time, I thought it was all fun and games. Not realizing that the reality of it was the opposite for my parents. But they never showed weakness and did everything they could for us. Having a television in our home was a luxury for us.

As a little girl seeing kids as old as I was at the time on television was the most fascinating thing to me. I was also fascinated with the singer Selena. My father would play the accordion and I would dance and sing her songs here at home or at family parties. I loved how she connected with her audience and how she touched peoples lives through her music/talent. Taking peoples worries away for a 2-3 min time span. I knew I didn’t have the greatest voice so I knew singing wasn’t for me.

As I watched TV, I wondered how can I be one of them? How can I connect with people and make a difference just like these people on TV are doing for me? So I did some research and quickly found an acting school/talent agency. My parents made an appointment for me to audition in front of the agent one day after school. I took photos and played a couple of roles they requested and I was in! It was the best day of my life. Soon after my mom would take me to auditions but shortly after the school closed permanently.

As a kid, I felt like my world was over and knew that things happened for a reason. But I knew deep down inside that one day I would again try to do it again. As a young adult, I started researching again and I was lucky to meet someone very dear to me who quickly helped me make a name for me in the pin-up world. I started modeling and then went on to co-host a show for her. It was amazing! I had so much fun meeting and talking to people and helping people that wanted what I had at the time. I’m all about helping and connecting with people.

While in the process, I had just had my first born son. It became very challenging for me to be a full-time mommy especially because I wasn’t ready to be a mom. So between my child, a full-time job and doing my modeling/hosting on the side I broke down and put myself aside because it wasn’t about me anymore. Once again, I told myself I will get back into this life again; once my son was older.

Years later, I was back in the industry but this time son was in it too! It was amazing because both my son and I share the same love for this industry. As my son got older he wanted to have a sibling so I put myself to the side again and we welcomed a beautiful little girl into our lives. So now I was a full-time mommy to two kids and one was an actor. I would take him and see how excited he was every time he booked a job and saw himself on TV. I was such a proud mommy. I thought to myself again about my dream but by this time I felt my “Biological Clock” was ticking.

I sunk into a great depression not because my life wasn’t great because it was. But because I never accomplished what I wanted for myself as a human being. I knew I wasn’t a young, hot, size 0-4 girl so I didn’t want to do modeling anymore. I was still open to hosting and maybe getting into the TV Production/Broadcasting industry. So I did some research again and asked my family for support and started school At the Academy of TV Production and Broadcasting.

A couple of months into school I learned so much from what I would say is one of the best Instructors ever!! Another instructor at the same school asked if I could help him at an event one day. I went with him and connected/networked with others while I was there (with no intentions other than just helping him), and it took off from there. I just happened to meet the right people at the right time and place. It all happened so fast.

I graduated from school with behind-the-scenes experience to now learning more and more on-camera hosting. I am thankful for everyone who has helped me along the way.

From the outlets, I’ve worked with and currently am to the wonderful hosts I’ve met along the way. I only hope to continue to learn more and more and help those around me and connect with people. And of course, to remain humble throughout this journey! I get a lot of messages on social media, via email, and on the phone about others who want to pursue this path.

I pride myself and I know I’ve answered them all and have been giving any feedback that can help them prosper in life as those who have helped me along the way. But I can’t emphasize how much this wouldn’t be possible without my family and their support. I love them all so much and I want them to know that they inspire me by just being them.

We’re always bombarded by how great it is to pursue your passion, etc. – but we’ve spoken with enough people to know that it’s not always easy. Overall, would you say things have been easy for you?
This has been the bumpiest road ever! As a mom, with two kids I don’t have the same flexibility as someone with no kids. I have to arrange my life according to my kids and their needs, not the other way around. I’ve lost amazing opportunities because of it. I’ve been offered amazing jobs out-of-town, but I know I can’t because of my circumstances. At first, I’m not going to lie I would cry and say to myself what can’t I? Why can’t I be selfish? And I would see these other girls with no worries in the world book them.

It would affect me, but I knew that everything happens for a reason, so I had to learn to let it go. In this industry, most of the women are somewhat younger than me. So I feel that I have to keep up with them physically. It’s exhausting at times. But I’ve learned that I’m still booking these jobs just as I am. I really want to help others that feel the same way! I want to bring awareness to everyone. I want to help them be “the voice” for them. I was the one you made fun of once type of girl.

When I was young, I was made fun of because I was too thin. I was known as the skeleton from the science lab or a walking x-ray. I was hairy, so I was also considered a man because I had a mustache. Most of my females friends were fully developed by age 12 while I stayed looking like an 8-year-old. Now as I’m older and became a mom, I get criticized for my curves! Now I’m too curvey. So I know what its like to be made fun of both skinny or curvey. I also struggle with panic attacks/anxiety.

A lot of the times I put a lot of pressure on myself and have panic attacks in the middle of the night because I’m worried that I’m going to mess up and they aren’t going to want to work with me anymore. I wake up in cold sweats and walk around my neighborhood for hours in the middle of the night. I cry on my way home from work or sometimes on my way there because I fear I’m not as good as everyone else. At the end of the day, I’m thankful and learn from everything that I’ve been though and everyone that know or met.

When one door closes, another one opens. If not right away, eventually it will. There’s a quote that I live by that I’d love to share with you. It’s helped me so much. I read it every time I feel threatened, worried or uneasy. “BE THANKFUL FOR CLOSED DOORS, DETOURS, AND ROADBLOCKS; THEY PROTECT YOU FROM PATHS, AND PLACES NOT MEANT FOR YOU.”

We’d love to hear more about what you do.
I am a reporter, journalist, producer, news (as of recently) and media personality. I would say my specialty would be an entertainment correspondent. I also model and act every now and then. I feel what sets me apart from others is my physical appearance because of my half-sleeved arm tattoo and my voice. My tattoo at first was a big disadvantage and would cause me to lose certain jobs.

I’ve always been obsessed with the entertainment industry, and I feel that it’s meant for me because so far its been the one to accept me for my tattoo. It actually helps me be me. I don’t have act, cover or be anyone else. People love my tattoo. They know me as the girl with the cool tattoo that delivers entertainment news to us. The feedback is amazing, and when I use my prescription glasses, it helps me even more. I’m like a cool nerd girl, and I love it!

My voice is raspy. It almost sounds like I’d smoked cigarettes my whole life when in fact, I’ve never ever smoked a cigarette in my life. But when people hear my voice they know it’s me without even looking, Its kinda cool! I have a distinguished voice, and I’m learning to like it more and more!

Has luck played a meaningful role in your life and business?
Both good luck and bad luck play a part in my life and success. When something bad happens, it pours of bad luck but with time it fixes itself, and I see that as good luck. 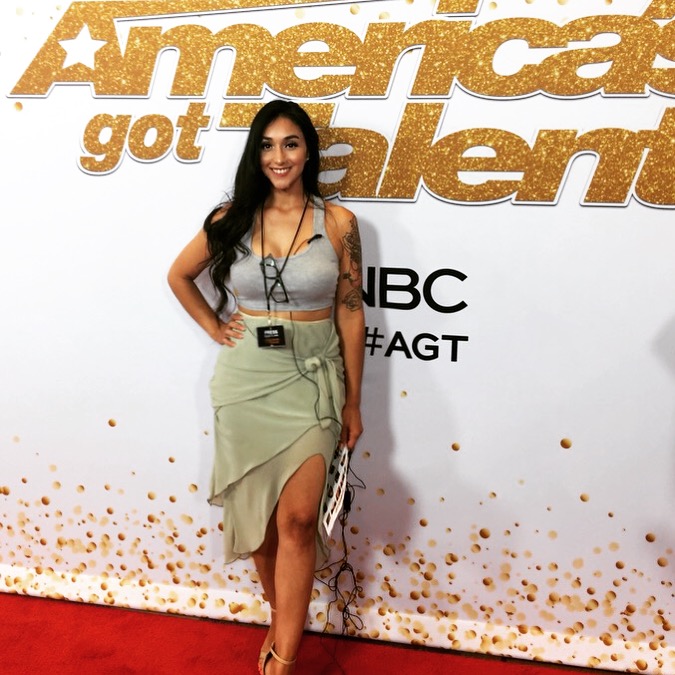 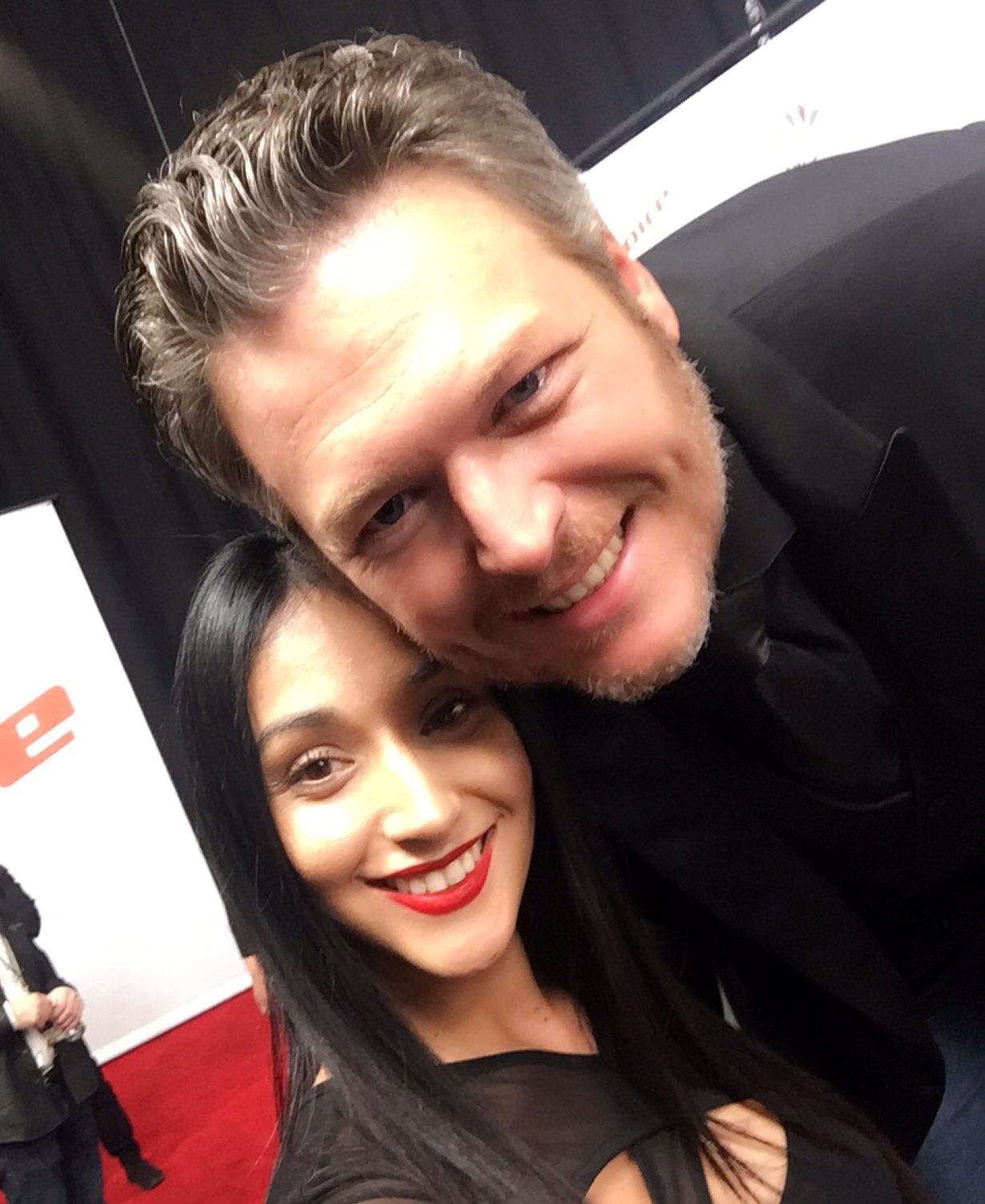 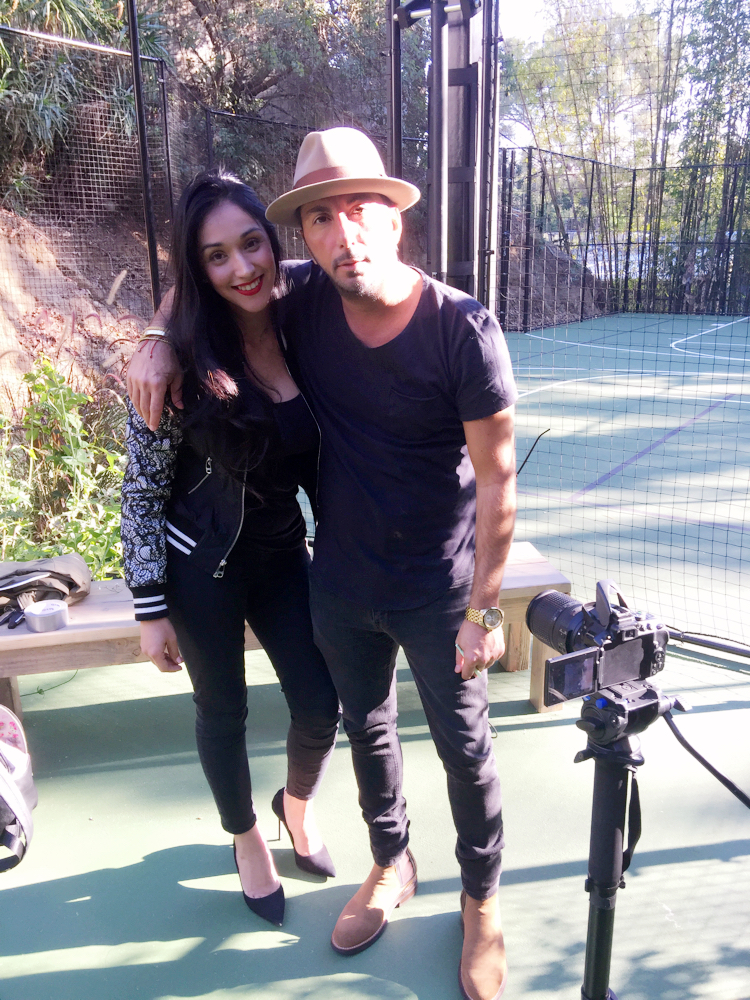 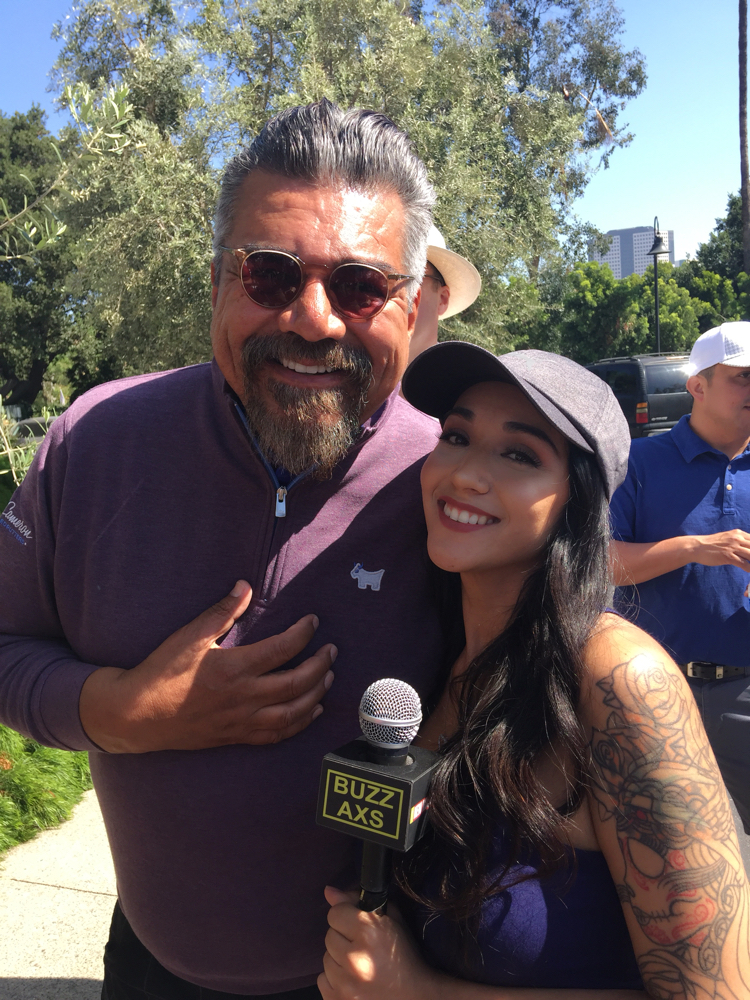 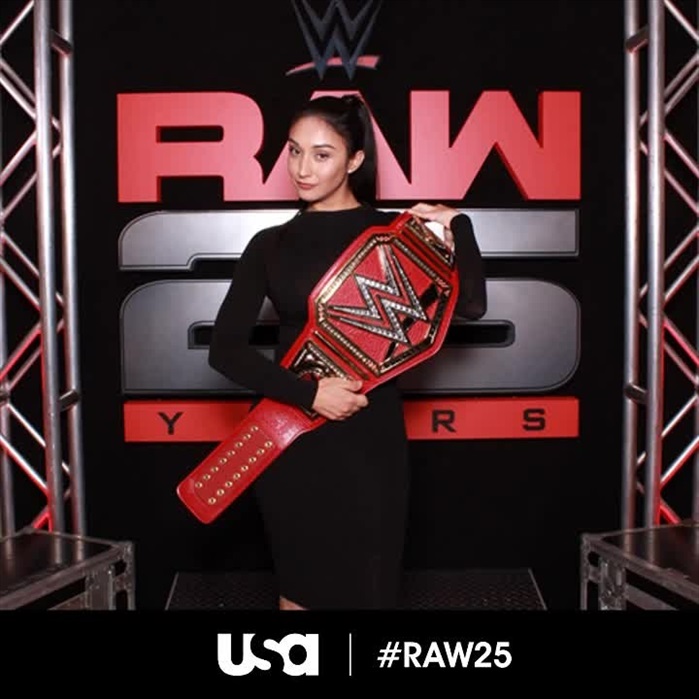 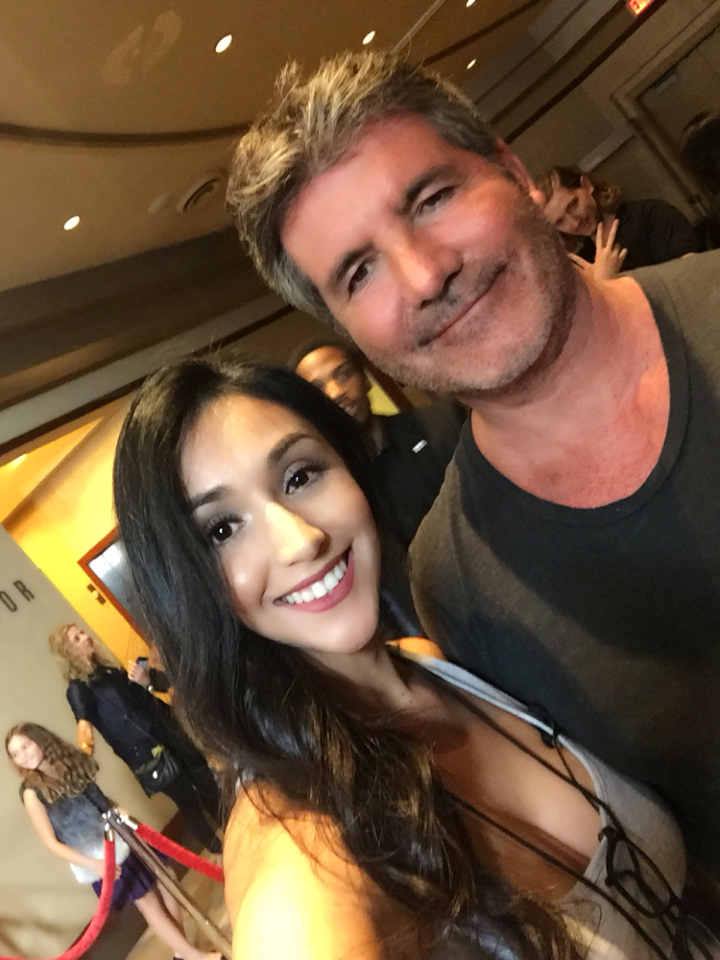 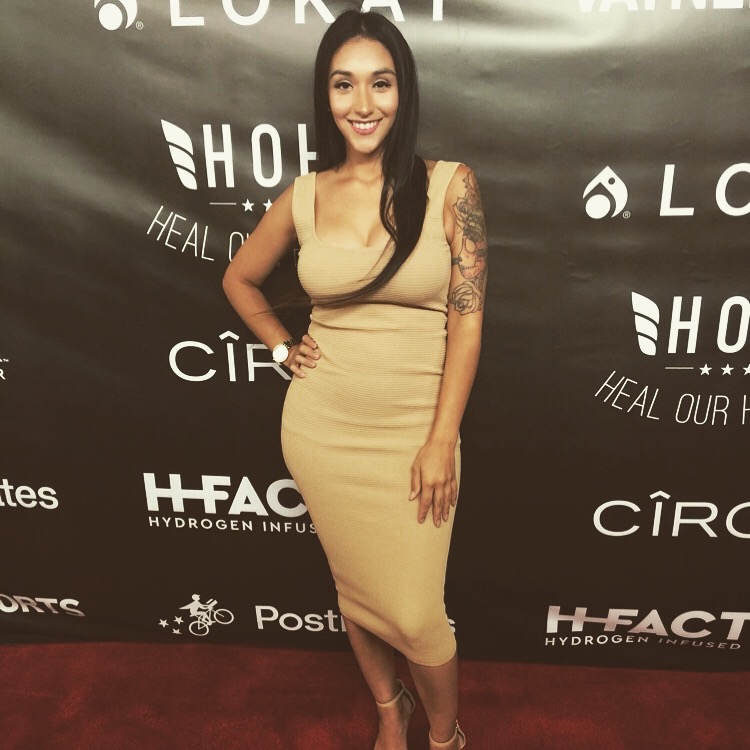 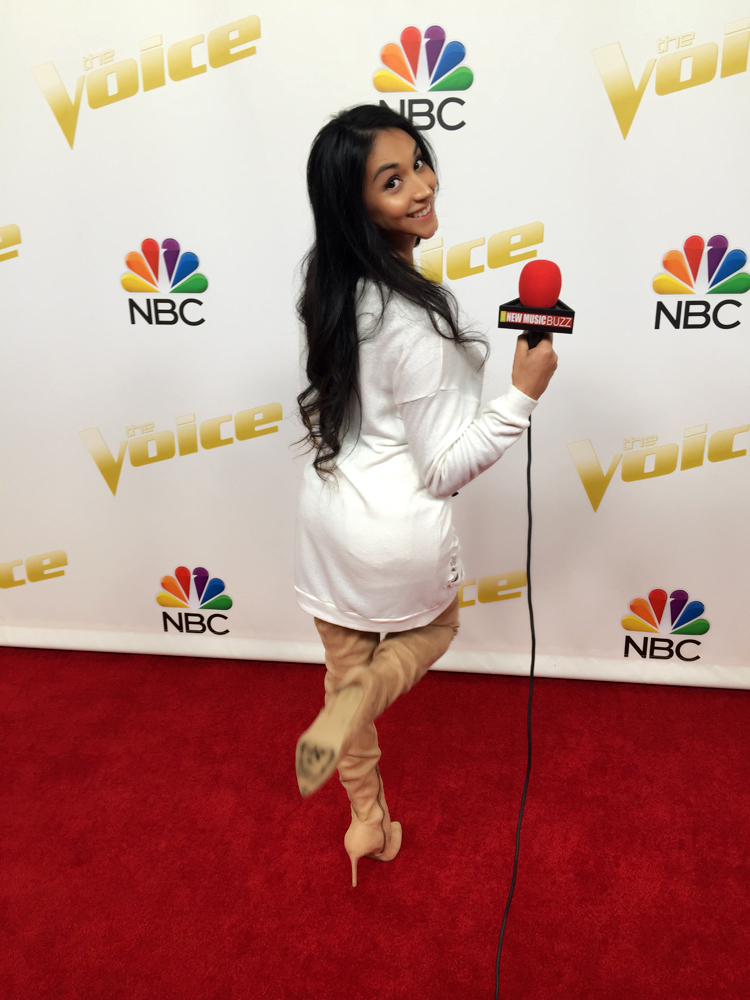