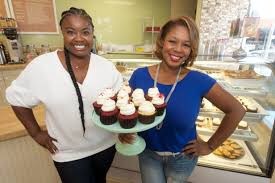 Today we’d like to introduce you to Catarah Coleman and Shoneji Robison.

Thanks for sharing your story with us Catarah and Shoneji. So, let’s start at the beginning and we can move on from there.
It all started with a craving, I was fairly new to Los Angeles and getting back for the holidays in Florida was too expensive. When it became too difficult to find my favorite southern desserts I started to call back home for recipes. One of my favorites was banana pudding and I would take it to events at church and with friends. Soon after I begin to receive special requests for my famous banana pudding. After dozens of episodes of the Big Idea with Donny Deutsch on MSNBC and encouragement from friends, I (Catarah) founded Southern Girl Desserts in June 2007.

As fate would have it, on the other side of town fellow Floridian and FAMU graduate Shoneji Robison had plans to start her own bakery. It was the suggestion of a mutual friend and Delta Sigma Theta Sorority sister that we meet to discuss a partnership. Just 30 minutes after meeting we agreed to become business partners and 10 years later we are still baking up sweet dreams!!

Our journey has had its ups and downs. Our first store was in a small café on Pico Boulevard in in 2010 and where we received our first call to appear on Cupcake Wars and HGTV. We soon moved a few blocks East where we shared a space with a small card and gift shop. There we competed for the second time on Cupcake Wars and made it to the last round, but didn’t win. It wasn’t until we opened our current location at the Baldwin Hills Crenshaw Plaza in May 2012. Over the past five years, we’ve been blessed. We finally won Cupcake Wars after our third appearance, we were invited to Sydney Australia in 2015 to represent the U.S. in the Cake, Bake and Sweets Show, we’ve made several appearances on Dr. Oz and as a result spent a week in Italy learning how to bake healthy desserts. We owe everything to our faith in God and countless support from friends, family and our loyal customers.

Has it been a smooth road?
Being in business is rewarding but it’s also one of the hardest things we’ve ever done. Nothing worth having is easy and this business has proven that. Like any other business the challenges come and go. For us the initial challenge was garnering capital to sustain and grow our business. We tried traditional banks and by this time the resources from savings accounts, 401K, parents and friends had been depleted. We were introduced to “alternative” loans back in 2012 and for four years we struggled with high interest rates, cash flow issues and huge loan balances we struggled to pay back. Today, we are wiser and thankful that we were able to climb out of a financial trap that could’ve closed our business down. It was the help of Opportunity Fund, a community centered loan company that helped us escape with our business intact.

All business owners can relate to the insurmountable time a growing business requires. Balance was an issue for the both of us. Having to maintain a demanding business, friendships and romantic relationships was a struggle, but we eventually figured out our groove.

Another obstacle along the way was growing so quickly from a two person business to having over 20 employees. Neither one of us attended business school and have learned everything from making mistakes. Some huge and some small, but we took each mishap as a learning opportunity to improve. To this day, use each day to better ourselves and our business.

We’d love to hear more about your business.
Founded in 2007, Southern Girl Desserts is co-owned by Catarah Coleman and Shoneji Robison, who combined their family recipes to create a Southern cupcake and dessert arsenal. “The ultimate compliment to us is when our customers say, ‘This is better than my mama’s,’” Coleman says. “Our focus and background set us apart from other bakeries—we’re a shop with Southern ideals and Southern recipes.” The self-proclaimed “Dessert Divas” bake from scratch based upon traditional flavors and home-style techniques, offering cupcakes made from the heart. They also create one-of-a-kind cakes, puddings, cookies, pies, and candy at their bakery in the Baldwin Hills Crenshaw Plaza in Los Angeles. “We pride ourselves on turning real ingredients into distinct and comforting ‘delectables,’” says Robison. “Everything is made with love, and we never cut corners cut.”

Both Coleman and Robison were raised in Florida and attended Florida A&M University, but did not meet until they relocated to the West Coast and were introduced by a fellow Delta Sigma Theta sorority sister. Coleman noticed that the City of Angels was in need of some Southern hospitality and flair, and what better way to showcase the flavors she grew up with than through a Southern-focused bakery. Six months after the launch of Southern Girl Desserts, Robison, an actress, joined as co-owner, bringing in a matching love for baking and a hearty list of potential celebrity clientele. The Dessert Divas worked together to build a successful business based upon the baking and the hospitality of their childhood. “We want to remind our guests of all the great flavors found in the South,” Robison explains. “We’re just two Southern girls who love to bake, and we want to share that love with others.”

The women pride themselves on their time-honored recipes, learned through many years of home-cooking. Most recipes are family-inspired, but plenty flavor combinations are dreamed up by the Dessert Divas themselves. “I have countless napkins, receipts, and scraps that I jot down recipes on when inspiration strikes,” Robison admits. “I think to myself, as long as I write this down, I can make it happen.”

Coleman and Robison received national recognition when they competed on and won Food Network’s “Cupcake Wars.” The women were bestowed with a $10,000 prize and the opportunity to cater the Chicago Toy and Game Fair, a black tie gala. The women are also featured for their celebrity dessert catering on E! Network’s “L.A. Sugar, and recently introduced new plant-based desserts called “NewtriGirl”: The healthy Southern Girl. It’s another layer to their amazing baked goods that they learned while being featured on the Dr. Oz Show. “It goes to show time and time again that our comfort-food desserts with Southern inspirations are a winning combination,” Coleman says.

Currently, the southern girl’s “Southern Savvy” episodes can be found on Amazon and Cooking Panda’s website.

Veggie and Turkey Quiche is served every weekday, among other tarts and pies. For convenience, guests can utilize the bakery’s curbside pickup service – pay ahead of time and park in designated parking spots to pick up their order without waiting, and can call 323.293.2253 to place orders and inquire about daily stock.

Southern Girl Desserts can help celebrate a sweet new arrival with distinct baby shower dessert concepts, or toast a new bride with customizable bridal shower treats. For weddings, Coleman and Robison create personalized wedding cakes, as well as cupcakes displays, individual cakes for each table, groom cakes, and Southern-inspired wedding pies, as well as offer custom designed serving tables. “These are some of the most important moments in peoples’ lives,” Robison says. “We give parties that extra ‘ump’ by devoting a team of planners and bakers to each event.” For other celebrations, such as corporate gatherings or birthdays, Southern Girl Desserts customizes cakes with logos and other personalized decorations. Consultations available.

Is our city a good place to do what you do?
Los Angeles is a great place to start a business because it is one of the most challenging places. We sit back now and think about how we started a business in a city where there was ample competition. In 2007 cupcake and dessert shops were popping up all over the city. Plus, the cost to run a business in California wasn’t the most affordable location to lay our foundation. But what we will say is it taught us how to survive in a city that could chew you up and spit you out without a second thought. Over the years we’ve seen so many bakeries come and go because it’s just not easy. Out of all those things, this city has had our back. Because we took a path all our own and started bakery that wasn’t limited to cupcakes and honored our southern roots, we knew we were on the right track very early in our business. We didn’t look to replicate the business model or menu of similar companies, we stayed in our lane and did what we knew best, southern inspired desserts!

We’d definitely recommend Los Angeles to launch a new business. It’s not the easiest place, but the value of the lessons learned, relationships forged and thrill of surviving year after year is priceless and worth it. Los Angeles is also full of resources to help new and growing businesses win! Organizations such as Pacific Coast Regional and Vermont Slauson Economic Development Center have guided our company in and out of bad times and are the angels that keep small business thriving in Los Angeles.

Finally, Los Angeles is unique that it has a large percentage of influential and celebrity residents. At any point a producer for a television show or even your favorite celebrity can walk through the door and change the trajectory of your business and your life. That doesn’t happen everywhere, but in La La Land anything goes.