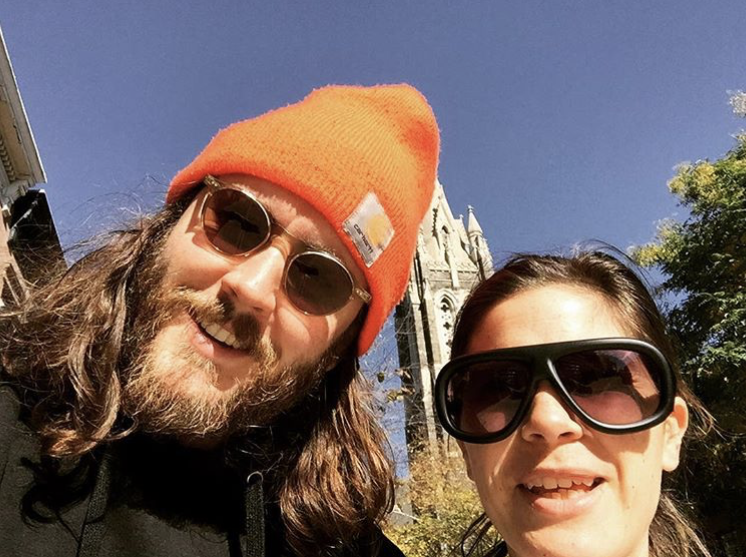 Today we’d like to introduce you to Carmen Grande and Nate Heller.

So, before we jump into specific questions about the business, why don’t you give us some details about you and your story.
Carmen is a clothing designer and occasional costumer for films, and Nate is a film composer and musician.

Nate: We’ve been together since 2002, so in a lot of ways we’ve grown into our creative careers together. I got my start working in music playing in bands around southern California, touring a lot and figuring out how to produce the music along the way (it’s cheaper!) When Marielle Heller, my older sister, was directing her first film, The Diary of a Teenage Girl (2015), she gave me a shot at writing a single to accompany the film. I was enamored with the graphic novel the movie was based on, and I wrote a song that ended up working really well with the film. Mari and the producers liked what I did enough to give me a shot at composing, a job for which I was ill-prepared, un-trained, and very enthusiastic. Turns out, the collaborative aspects of making music for film are similar to what I’d been doing, and my instincts for the work are pretty strong. The movie ended up being a big hit at Sundance. Since then, I’ve continued to produce pop music, but I’ve really found my footing as a composer. I’ve worked on short films, documentaries, indies and big budget films. I recently wrapped up production on a Nicole Holofcenter-produced indie feature called Sophie Jones, and my third film with Mari, the upcoming Tom Hanks-as-Mr. Rogers film, A Beautiful Day In the Neighborhood.

Carmen: I’ve always had a strong sense of style and desire to make things, which morphed into more of an obsession after I attending pattern making school, Apparel Arts, which was in SF at the time (now in Oakland). Preferring to learn on the job, I apprenticed under bespoke bridal designer, Suzanne Hanley, practicing couture sewing and design techniques. Around that same time, I also worked on Diary (it was a family affair) as costume designer, where my love for vintage collecting could finally be put to good use. After moving to New York, I split my time between fashion and film, freelancing as a technical designer between film projects. Since moving to LA, I’ve focused more on costume making and custom requests, as well as developing a ready-to-wear clothing line with quality and sustainability at top of mind.

Overall, has it been relatively smooth? If not, what were some of the struggles along the way?
Carmen: I’m constantly struggling to figure out my next move. I continually evaluate why I am doing the work that I am and whether or not it’s taking me in the right direction or closer to my goals. I am also a Pisces, so I’m inclined to switch up my focus pretty frequently. In practice, this means I haven’t always followed a linear career path and that definitely makes things hard sometimes.

Nate: For me it’s been a medium bumpy road, just in terms of adjusting my metrics for success along the way. I spent many years pushing for a career as a producer and performer in bands. At our peak, my most successful band, Wendy Darling, had a record deal in Japan (lol), a manager and major booking agents. But in the late 00’s the model of being in a band and trying to gain exposure by touring every other week didn’t feel like it was paying off, and the band fizzled. I continued to collaborate with friends and had a few cool song placements in TV or film and original song-writing opportunities. All that helped to keep me loose and kept my creative muscles in shape, so when the opportunity to do Diary came along, I felt that it was worth a try at least. The success of the film and the kind words about the music in the press gave me a swell of confidence. But, the very next movie I booked ended up changing musical direction drastically in the edit, and I got fired. So there are swings to this work. But composers and film editors are the most dispensable roles in a film-making process (in post at least), so it does happen a lot. In fact, the next feature I got (Circus Kid) was a project where the original composer had done some good work, but it wasn’t enough. I ended up taking the job, but also encouraging producers to keep some of the score they had, allow me to replace a few cues and to embellish some of the existing music. This experience helped me get my juice back and reminded me that being flexible but honest feels like the only way for me to exist in this field. On a personal level, learning to be fluid with the work, and adjusting my expectations in terms of what I need from it has been key to sustaining myself so far.

We’d love to hear more about your work and what you are currently focused on. What else should we know?
Carmen: I’m a clothing and costume designer as well as a technical designer for apparel. I specialize in evening and special occasion dresses, from bridal to red carpet. I am super excited about my latest costume design work for OGhosthaze’s new music video, “Strange Luuv,” which comes out in November. In addition, I will be launching my own ready-to-wear clothing line this coming Spring.

Nate: As a composer, a lot of the work I’ve done has naturally sort of fallen into two categories – stuff that’s very ethereal and sort of whimsical (often done in a more digital format), and more kind of jazz combo as score performed with live musicians. On Diary, Circus Kid, and Sophie Jones, the work I did was definitely in the more textural, ambient realm. I think I’m good at working with a subtle touch and letting the film do more of the heavy lifting, in terms of storytelling. It’s rare that I want the music to make you feel something you aren’t already feeling from the film – I’m focused on helping the director tell her story without the music being heavy-handed. The more jazz-based scores I’ve created sort of happened for similar reasons – because the world of the film called for it. Can You Ever Forgive Me? is set in 1990’s NYC, and was asking for a sort of classic, New York jazz sound – this was the world that the main character, Lee, lived in and what she loved. So we used that character’s love affair with the old NY as a jumping-off point for the score. On A Beautiful Day In the Neighborhood, similarly, there were reasons to take the score in a jazzy direction. Fred’s band leaded, Johnny Costa, was an incredible jazz improvisor. So in addition to dutifully recreating the music from the show, I was inspired to weave elements of the original show music into the score but also had the opportunity to embellish the work with a 31 piece orchestra. It was fun being able to go so big with it!

Any shoutouts? Who else deserves credit in this story – who has played a meaningful role?
For both of us family has played a big role in our success, starting with our parents supporting our creativity and educational growth from a young age. As adults, our siblings have been collaborators – Mari gave us both our first movie jobs; Carmen’s older brother Montag has offered his perspective from working in the fashion industry for many years. Howard Paar, who was the music supervisor on Diary has become a friend and mentor. Having family or friends who work in these industries and who can offer their perspective has been invaluable for both of us. There seem to be so many secrets you have learn through trial and error – whether it’s trying and failing at something, coming to understand how the product actually gets made, where the money comes from. Shit like that is daunting when you’re new! Having people to help us navigate has been a blessing.

We also lean on each other for support. We are a family, we have a baby, and we both work jobs that that demand stretches of intense, sometimes emotionally consuming work. So we juggle, and we prioritize carefully, and our workflow kind of has to go in waves. When Nate’s in crunch time with scoring deadlines, Carmen does what she can to support and keep the family happy and balanced. When she’s up against a deadline, Nate puts in more work on the household and family matters so she can focus on the task at hand. It’s a challenge starting a family with as two freelancers, but we are doing our best to make it work. 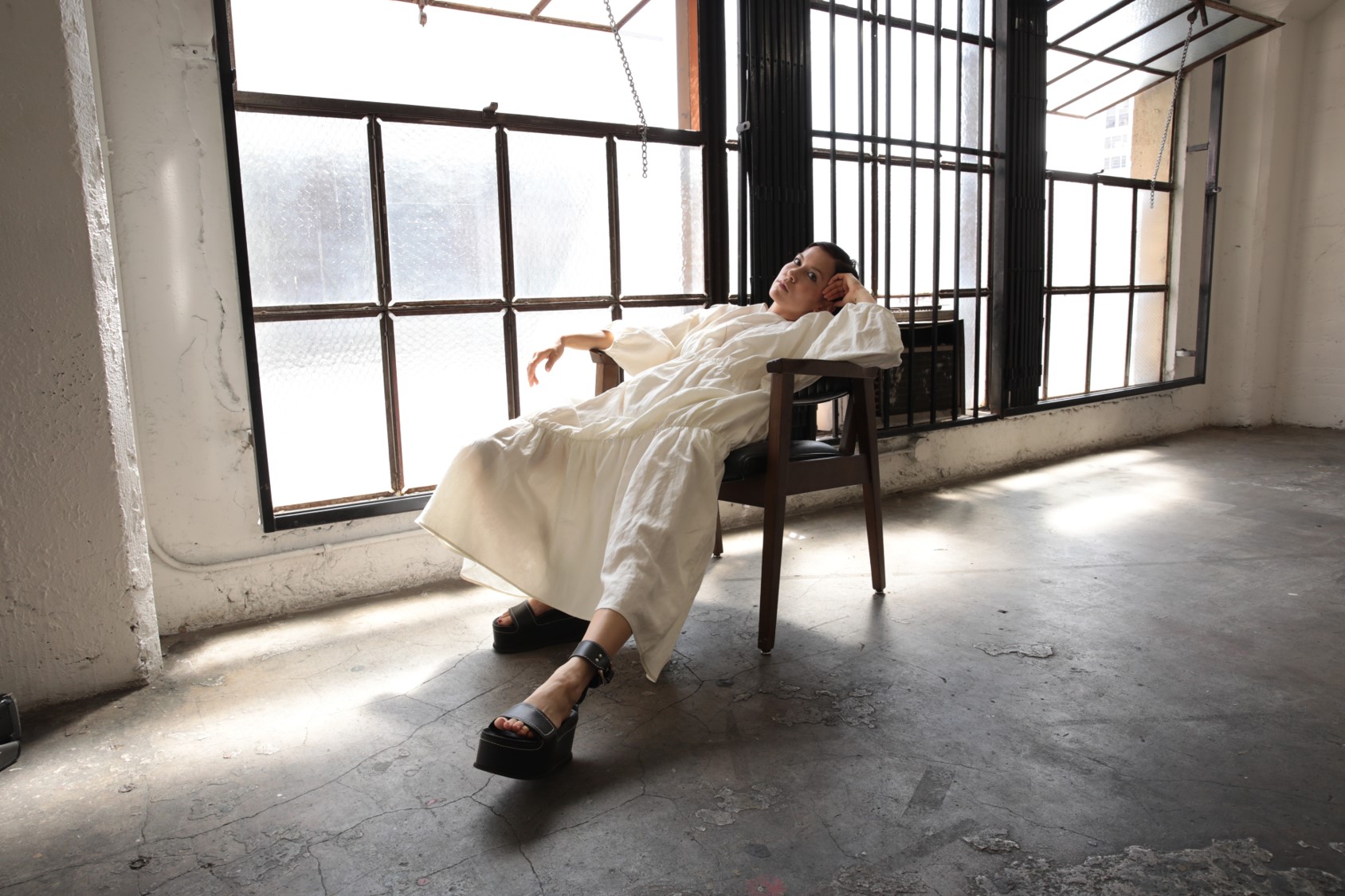 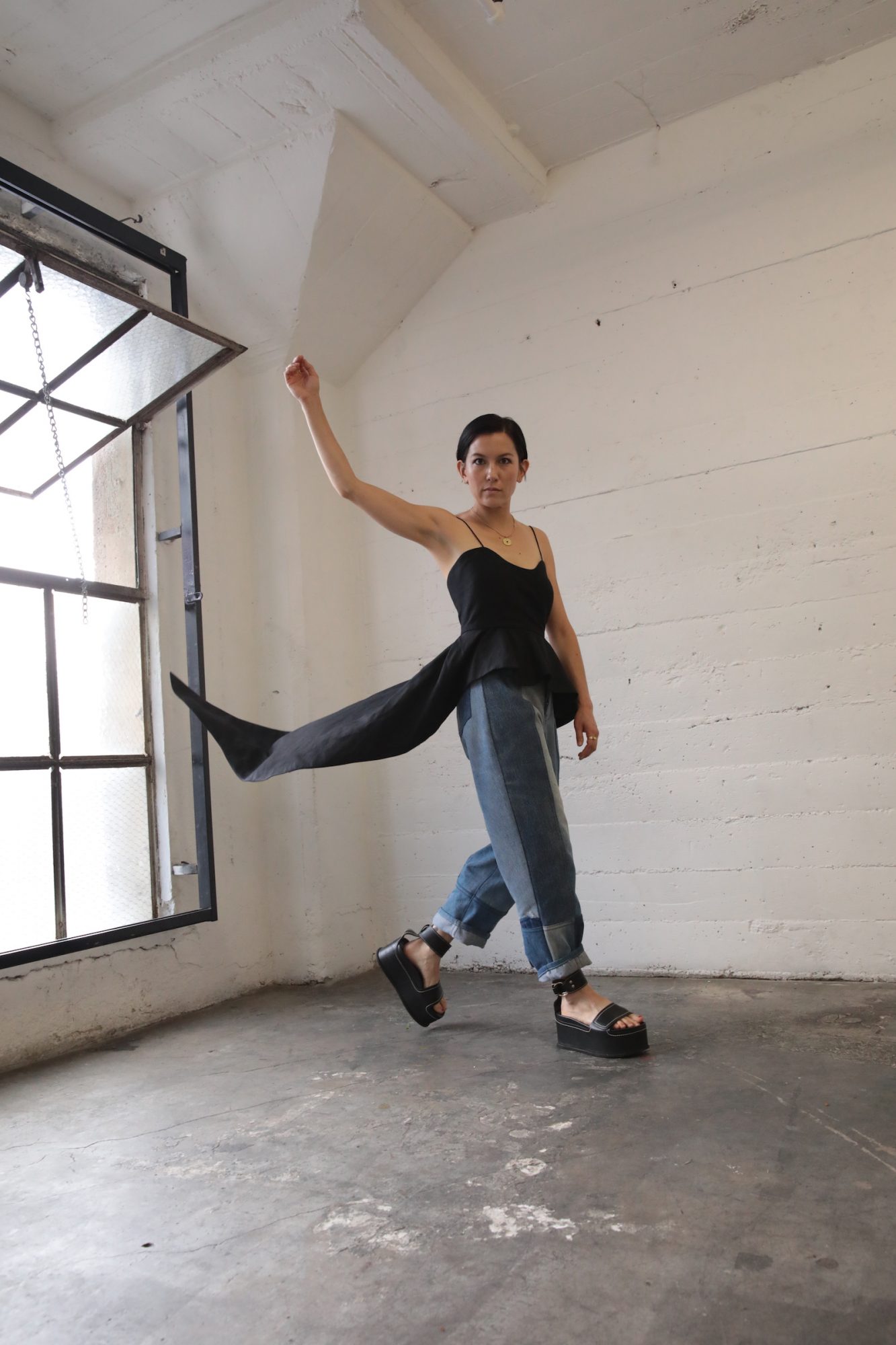 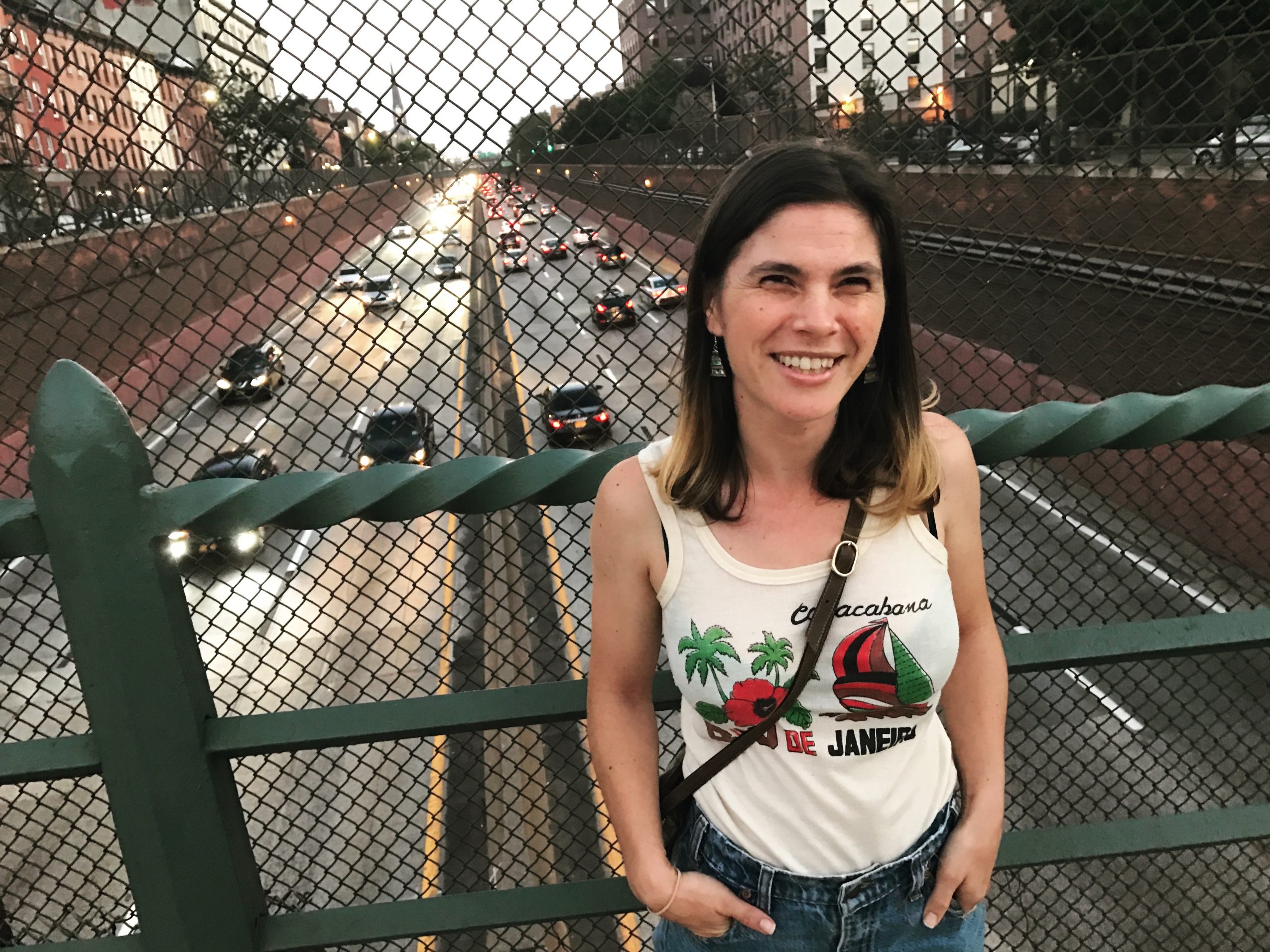 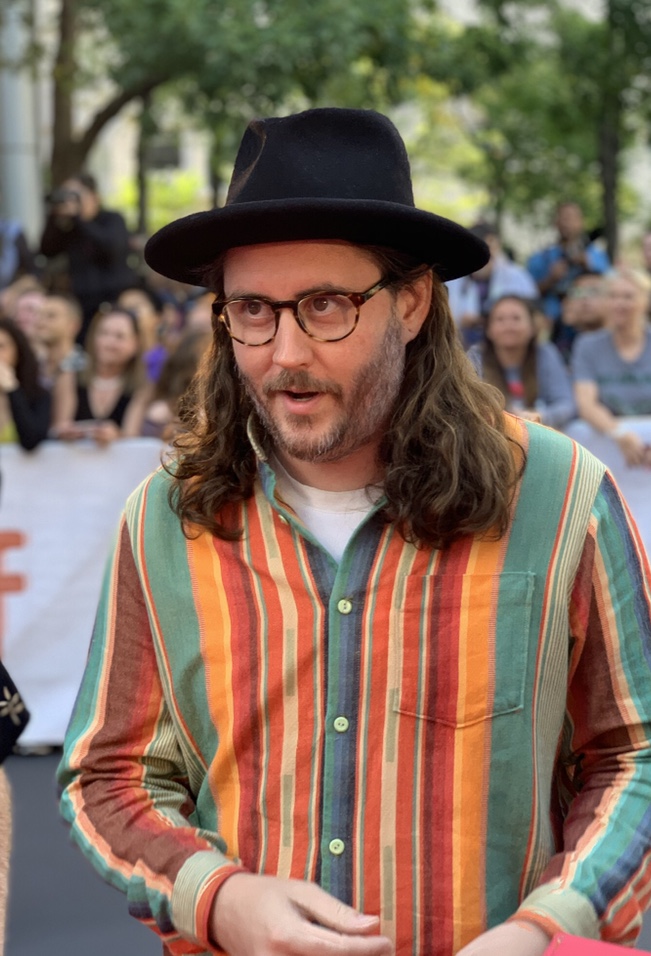