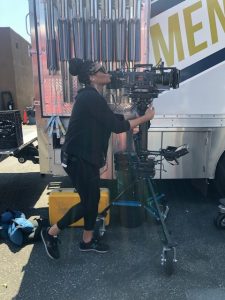 Today we’d like to introduce you to Camille Murray.

Camille, let’s start with your story. We’d love to hear how you got started and how the journey has been so far.
I heard a powerful sermon once. The speaker asked, “what would you do if money wasn’t an issue? If you could wake up everyday and do your hobby or do what you love…what would that be? You should find out what it is you love to do and go after that…pursue that.” So that’s what I decided to do. I will never forget this day…I went back to school to study film on October 1, 2007.

I started out at the Art Institute of Atlanta to pursue a bachelor’s degree in Film and Video. The very next day I met the film director, Leslie Small, at a church function in Atlanta. We started talking about film and he told me about a movie he wrote and shot. I told him I just started film school the day before and talked to him about my goals. He replied, “well, the first day you started film school you entered the film industry”. I asked him if he would mentor me and teach me about the film industry and to my surprise he said, “absolutely”.

We exchanged information but I waited to call him because I didn’t want to bug him and I wasn’t sure if he was 100% serious or legit about helping me. He called me the next day and asked why I hadn’t called him yet. I told him I didn’t want to keep bugging him, he replied bluntly, “do you want to do film or not”, I said “yes” and then he invited me to a movie he was working on with Ciara, the singer, they were shooting at the Rialto in downtown Atlanta. The day after he invited me to shadow him while he was directing a stand up special for the comedian Eddie Griffin. Those two experiences showed me that I really wanted to work in this industry and learn everything I could about this business. Shortly after that, doors started opening for me.

I excelled my first year of film school and had a 4.0 gpa and qualified for the Georgia Hope Scholarship. The Art Institute was pricy so I decided to transfer to Georgia State University to finish out my schooling. The Hope scholarship covered all my tuition. After graduating from GSU, I went to Full Sail University to pursue my master’s in New Media Journalism.

I started out working camera by volunteering at my church in the television ministry and I was getting trained by some of the best camera people in the industry. At that time, I don’t think I realized how fortunate I was to be surrounded by the people I was serving with. This ministry had already won Emmys for their broadcast. Some of the people who trained me worked in the film and TV industry as camera operators for CNN, reality TV shows and for the big local news stations in Atlanta. I was thoroughly trained in shooting live television, concerts, speeches and plays, etc.

I fell in love with working camera and the technique of storytelling. The directors in the ministry trained me on the importance of capturing beautiful shots and making sure you are not shooting distractions so you won’t lose the viewer. They pushed me out of my comfort zone and threw me in situations to force me to grow as a camera operator. Through their training, I found my passion and a love for storytelling. I also thought it was pretty cool for a woman to be behind the camera, especially a woman of color, in a field that is dominated by men.

We’re always bombarded by how great it is to pursue your passion, etc – but we’ve spoken with enough people to know that it’s not always easy. Overall, would you say things have been easy for you?
No, it has definitely not been a smooth road. I’ve had a lot of ups and downs in my career, especially while I was finishing up at GSU. I ran out of money and had capped out with the Hope Scholarship and I didn’t have enough money for my final year of school. I was also still volunteering on the TV ministry, sometimes twice a week for two to four hours at a time. Also, during this time, Leslie was directing a lot of the Shaquille O’Neal All Star Comedy Jams. He would invite me to come and work camera or fill any position he needed assistance with. I never wanted to miss an opportunity with Leslie because I learned so much and made good connects while working. I was just tired as hell and felt like I was all over the place but I knew I had to keep pushing. Eventually, I received some type of hardship loan and was able to finish school on time and graduate.

The downside for me, while being in school and trying to work film gigs, was that I couldn’t say yes to every opportunity. And after you say no to people a couple of times, because of your school schedule, they eventually stop calling because they know you’ll most likely be busy. I think that kind of hurt my career in Atlanta in the beginning. I got gigs here and there but not consistently enough to do film full time after I graduated.

Thank God for Leslie! I would call him and see if he had anything I could help out on and when he did he would invite me out to work. On some gigs, I would assist the 2nd Unit Director and help cover the behind-the-scenes footage of the comedy shows we were filming. That’s what I did when Leslie invited me to work on Kevin Hart’s Laugh At My Pain. These opportunities were a blessing because it helped me build my resume. I loved hanging out with Leslie because I was also able to sit in on meetings with him and listen to what he would talk about with producers, directors and DPs. I learned a lot about the industry, from pre-production to post-production.

So, as you know, we’re impressed with Sicily Camille Productions – tell our readers more, for example what you’re most proud of as a company and what sets you apart from others.
I made a decision a few years ago to move to Los Angeles and pursue my dreams so I started preparing for that move. It took me a while but eventually I made the move out here last year, fall of 2018. Before I moved, the first thing I did was incorporate my production company, Sicily Camille Productions. I know banks like to see that you have been incorporated for at least two years when applying for a business loan. I didn’t want to wait for things to start happening for me; I wanted to be ready when the opportunity came so I started setting things up business-wise to prepare myself for that.

I have a desire to tell stories that will set people free, people who may be living in bondage in their minds. I don’t want to make fluff films, but instead, movies that will inspire people to figure out their purpose in life. I, myself, also learn a lot from others people’s journeys and life stories. I believe you can set people free from some of the things that they’ve been dealing with for years when you share your truth with them. I am in the beginning stages of my company and I know that it will take a lot of hard work and sacrifices and I am ready for all there is to come!

A have a couple of projects that I have in the works and I am super excited about them. My attorney is coaching me and showing what I need to do to close deals and be prepared when I go into meetings. One thing that I am most proud of as a company is the fact that I will get to hire more women. I would really love to train women on how to work camera and teach them what I have learned. I am constantly studying my craft and trying to improve myself. Since I moved to California, I reconnected with an awesome DP, Keith Smith. I met Keith through Leslie Small years ago when I first started film school back in 2007. Keith trained under Oliver Stone and now I get to learn from him about being a camera operator and how things really work on film sets.

One thing that I love about Keith is that he loves to teach and he is eager to show you everything that he knows. He also hires women to operate camera for him, and for me, that’s a game changer. I believe when you have men like, Leslie and Keith, who give opportunities to women, especially women of color, it really changes the dynamic of a production in a powerful way. Working on films when the camera crew consists of mostly women is a mind-blowing experience for me. I want every woman who desires to walk the path I did to have that same experience. I believe that my production company will be able to provide that experience for women and that is what will set me apart from others.

So, what’s next? Any big plans?
My plan for the future is to learn, learn, learn as much as I can and build healthy relationships in this industry. I want to emerge myself in the business side of film and get these projects off the ground and completed. I just want to do my passion and fulfill my destiny. 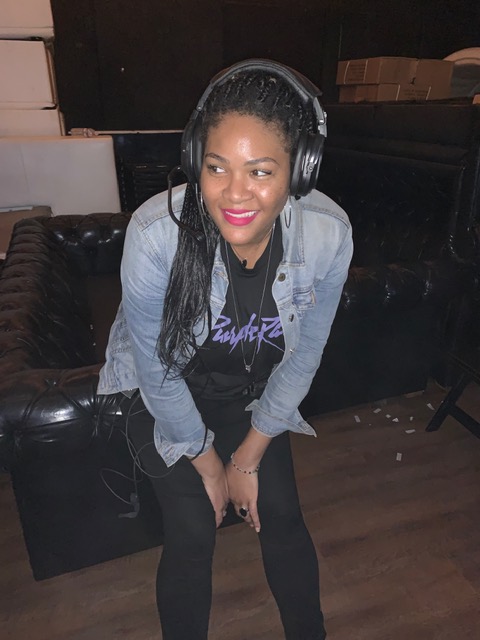 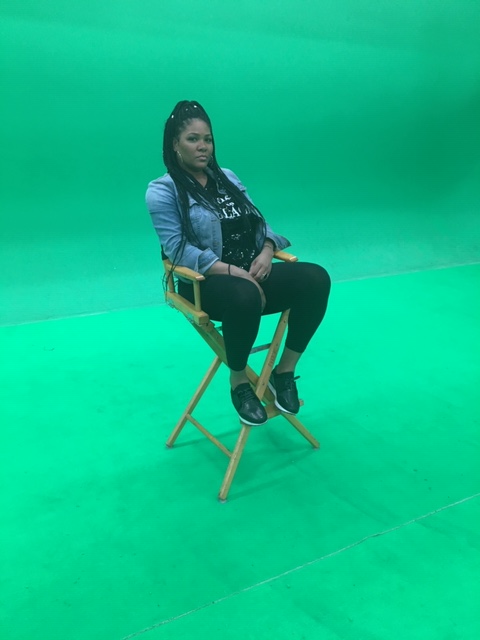 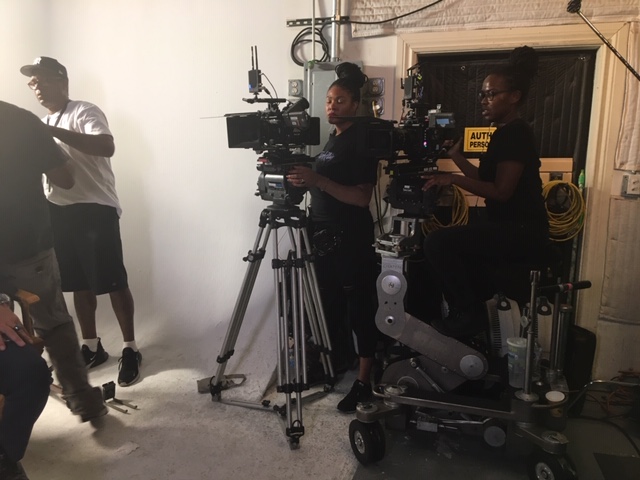 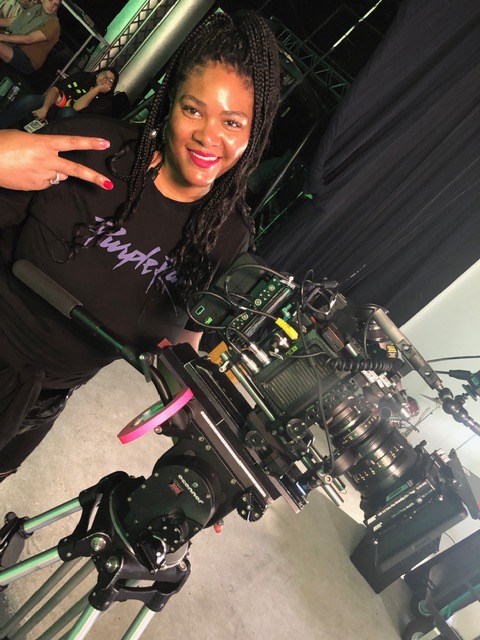 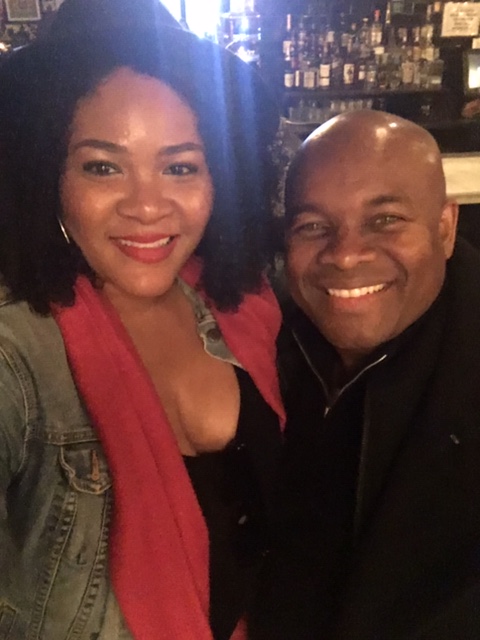 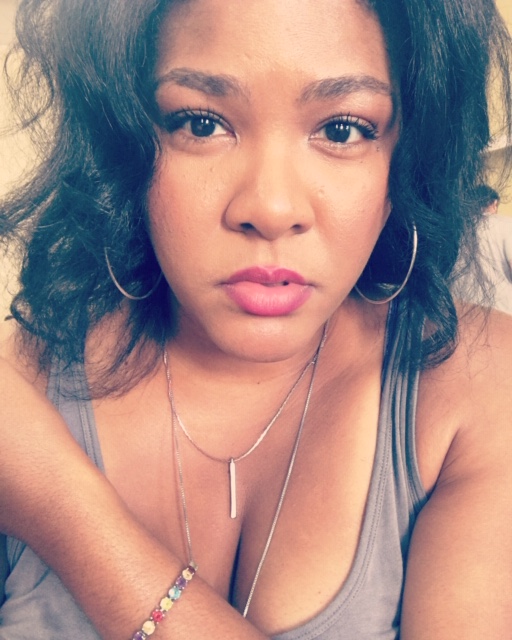 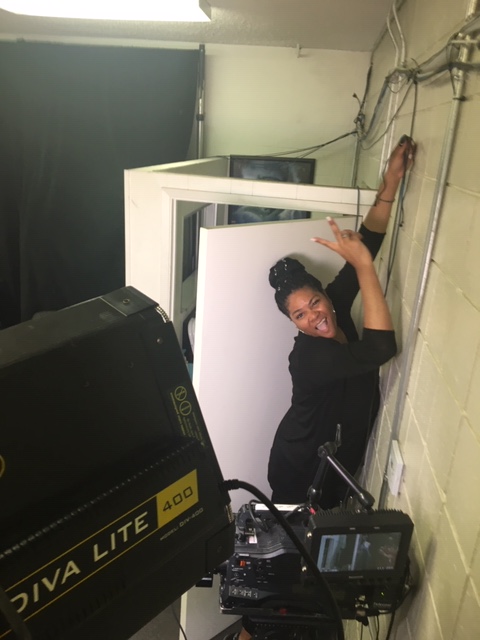