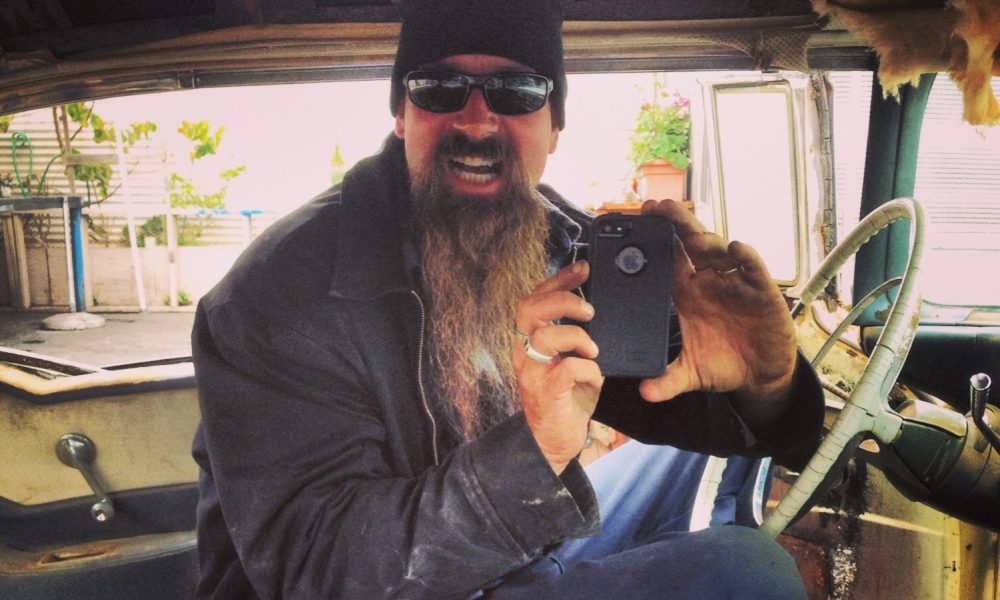 Today we’d like to introduce you to Brother JD.

Thanks for sharing your story with us Brother JD. So, let’s start at the beginning and we can move on from there.
I came to Los Angeles back in 1988 to pursue my electric bass playin’, rock star dreams. After touring with a band across the states behind some MTV airplay, I actually lived those young visions I had. After meetin’ my future wife on Venice Beach, our growing family deserved a bit more cash flow than my music income provided. I decided to go back to school and study my other passion…building cool cars and motorsickles.

During my studies, I landed a steady gig at a local west side car dealership. While working there and providing for my family, I never stopped playin’ my big bad bass in gigs around the L.A. club scene. I would also buy, fix up and sell cool rides on the side as a way to bring in extra cash. These rolling works of art and my music were just all part of my soul’s attempt at expression. In 2009 I decided to blend all of these artistic expressions into one business. The list I wrote down was simple. My business had to involve music and video production, cool cars, trucks and bikes, had to be good for the community, spiritually positive, and had to have a great logo. “El Rey’s Garage” was born in my own backyard right here in Venice Beach.

After being frustrated with the high dollar builds I saw on TV car shows, my wife and I decided to create our own backyard style TV show where I would be the builder and host. I would not only show how we do things in the hood on a super low budget, but I’d also get to put my music all over the footage. We posted a video of my kids and I building a ’67 Riviera in my tiny, open air, Venice backyard shop. Our cool little footage was somehow seen by a production company in New York City. They actually contacted me to produce a television show about my low buck operation. That collaboration created the TV show “TURN & BURN” which still airs on the Discovery Channel and their affiliate networks worldwide. From that experience, I learned how quality TV was made and attempted to repeat what we had done in the past. El Rey’s has now grown into a full-blown production company where my little operation is no longer in my back yard. We now operate out of the same shop we are known for worldwide located at 8741 Venice Blvd, Los Angeles 90034. Our latest TV show is called “WRENCH WARS” which airs on Monday nights on MAVTV, (The motorsports network – channel 214 on DirecTV). When we’re not producing television, or our “AMERICANA RADIO” podcast, you can still find me wrenchin’ on cool cars, trucks and Harleys at the shop. And last, if I’m not involved in TV, Radio, or this custom car culture, I can still be found thumpin’ that ol’ Fender bass in clubs around town. That my friends, is what El Rey’s Garage is all about, Custom Americana Culture at its finest!!

Great, so let’s dig a little deeper into the story – has it been an easy path overall and if not, what were the challenges you’ve had to overcome?
It has not always been a smooth road. When you create and produce TV shows that actually air on television, you tend to believe that the money will come pouring in.

Ladies and gentlemen, that is not always the case!! Although we do ok, we continue our climb up the entertainment ladder. Success is a lot of fun, but a great deal of work and sacrifice goes into it no doubt. In this business of ours, we continue to try to out-do what we’ve done in the past, stay true to our souls and yet stay relevant to our fans and future fans. I also have to give a huge shout out to my other, better half. She is the reason behind all of El Rey’s success. She is the one that prods me into bettering myself not only spiritually, but technically during productions and basically steers me clear of anything that would generally be “un-cool!!” She is the gauge on which I base all of our business decisions. She is my best friend, my girlfriend, my business partner and my wife. It has been a challenge on us to give up our comfy day jobs to pursue our actual dreams. But one thing I can tell you, it has brought us closer than ever and the stresses make the achievements even sweeter!!

Please tell us about El Rey’s Garage.
El Rey’s Garage is a place of creation. We specialize in creating rolling works of art in the forms of custom cars, trucks and motorsickles (no, I did not misspell that). When not creating these rides, we are heavily involved in the production of television shows, radio programs and music. What we are most proud of as a company is our current TV show called WRENCH WARS which airs on MAVTV.

Do you look back particularly fondly on any memories from childhood?
My favorite memory from childhood would be creating bicycles from different bikes we had around the neighborhood. I was the guy with the tools and all of the kids in the neighborhood would come my way when their bikes needed repair. I also really liked ridin’ dirt bikes and go-carts through the woods and around the hood!!