Meet Brian Keneipp of The Aetherius Society in Hollywood 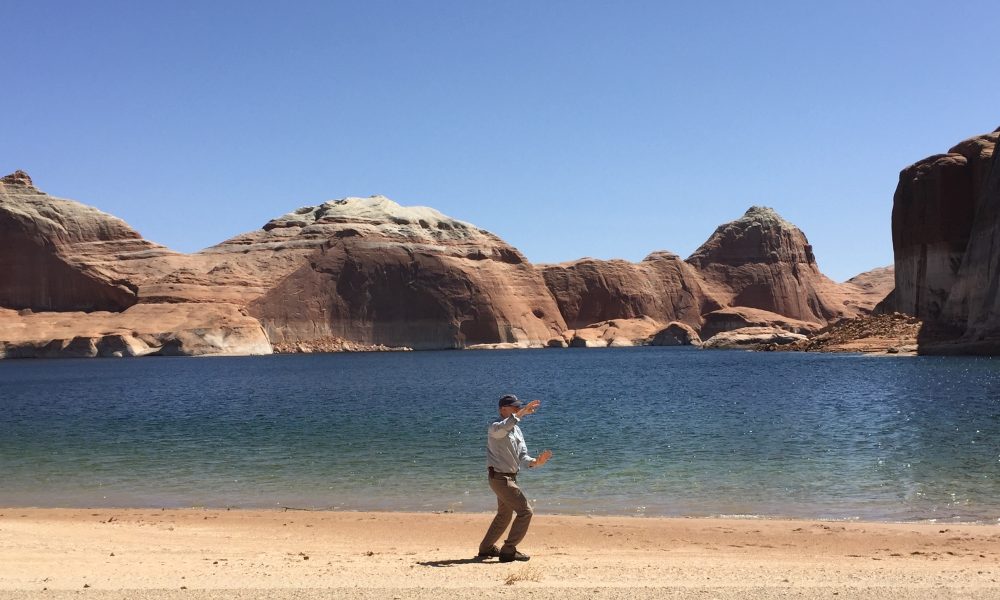 Today we’d like to introduce you to Brian Keneipp.

Brian, let’s start with your story. We’d love to hear how you got started and how the journey has been so far.
My journey started when I took my gap year between high school and college to explore Central America. My parents were amazing to ok this solo trip of mine. I saved up to buy a very used Volkswagen bug which I spent many weekends fixing up before driving it off. During this trip, I had a pivotal experience which proved to me there was an underlying Spiritual power behind the scenes.

The story goes as follows. One day, I somehow had neglected to check the gas gauge, which was unlike me. The sun was setting. I had no idea where I was except, I was on my way to a remote southern portion of Costa Rica and I was literally in the middle of nowhere.There was no cellphone or GPS in the car for navigation back then. No towns, facilities or gas stations had been seen for miles. The car was still running so far. I knew that this part of the world was very dangerous, especially so for an 18-year old gringo alone in a car at night. My girl-friend had given me a copy of the Bible before I left for my trip and she went off to college. All of a sudden, I remember a passage I had recently read in the New Testament where this Master explained how to pray. Then I found myself praying for the first time trying to follow the instructions of the Master Jesus. These instructions included you have to have absolute faith in what you are praying for in order for that to manifest. Needless to say, this was an immense struggle for a logic-centered scientific-minded 18-year old, yet I persevered.

As I approached the top of a long gentle hill, the gas cut out. But my momentum carried me over the crest where I looked out and saw again a landscape with nothing on it, except at the base of this hill I was on – a lone gas station. I was holding my breath and the momentum just barely got me to a rolling stop at the pump in the gas station! To say I was freaked out would be an understatement. That experience left a lasting impression on me and I certainly do not ever question again whether prayer works.

The next turning point for me happened the following year when I started my program as a pre-med student in Illinois. After I took a metaphysics and para-psychology free-school class presented by a Member of The Aetherius Society, I was intrigued and decided to learn more about this little known organization. At that time, I was familiar with certain works from various traditions but not at all with this organization. Soon after I read the book, The Nine Freedoms, which is one of the most significant teachings in The Aetherius Society, my life was forever changed. There simply was no other book like that. This metaphysical treatise outlines the journey that everyone has to go through regardless of their race, faith or creed. I had some interesting experiences that confirmed the validity of what I learned in the book.

It became apparent to me that I could be of much greater help to the world as a whole by devoting my time to help The Aetherius Society in its Missions for World Peace, Global Healing and Collective Spiritual Awakening. Thus, I quit school the following year and moved out to Hollywood, California to offer my assistance at the Headquarters as well as to be in the presence of a Spiritual Master, Dr. George King. You may have read what it is like to be with a Master at an ashram from reading Yogananda’s book “Autobiography of a Yogi”. However, my experience being at the Headquarters with Dr. King, which you can look at as a New Age ashram, was very different, yet the discipline and intensity was very much present.

I learned the ropes and settled into my new environment. Outside of this Spiritual community, I had to deal with the initial shock from taking a rather low-end corporate job to support myself so that I could stay in Hollywood to be a Staff Member, which is an unpaid volunteer position. I remained steadfast and clawed my way up the corporate ladder until I was asked to work full-time at The Aetherius Society 9 years later by Dr. King. This was a moment I had hoped would happen one day.

With no hesitation, I left my by that time well paid outside position at AT&T. I eventually rose to be at his side. I was one of his few close Personal Aides during the last 10 years of his life. That included living with him and being on call 24/7. Dr. King was a very practical Master and recognized the urgency in doing something to help correct the imbalance in world karma. He viewed his organization as a Spiritual Commando Force. In order to grow and be of use to the world in the best manner possible, an aspirant must apply oneself, exercising considerable discipline and demonstrating a willingness to make personal sacrifices in order to be able to bring about the needed change in oneself so that they can be of greater help to transform our world. Until his passing in 1997, I was privileged to see and help Dr. King in ways I could not have dreamed of as I arrived from the long road-trip to Hollywood from my college in Illinois in my VW in 1978.

I have been in my current position as the Executive Director of the American Headquarters since 2004 and Bishop, since 2010. If I could choose again, I would have made the same decision to move away from my family, friends, schooling and the career to be a doctor in order to be of service to the world through The Aetherius Society.

Has it been a smooth road?
One early struggle was with my dad. He was furious that I gave up what he considered to be a bright future as a doctor to lay down my life for a rather unknown organization in the name of spirituality and the desire to save the world. I understood he meant well and was concerned, but that did not make it any easier. I remember one time when I had gone home to IL for a visit, I was in my bedroom doing some Spiritual practices. Then I heard my Dad’s outburst after finding out from my Mom what I was doing, “I do not want any meditation crap in my house!” Eventually, my Dad did come around to become supportive of my decision after he realized that I was still the same person and he had not lost me to this organization and he visited me often in Los Angeles as one of his branch offices was in Pasadena.

On the work front, I had to re-adjust to a new environment and find a way to support myself from being a pre-med to someone starting out at the lowest end of a totem pole in our materialistic world. Surely you must have heard of other dropouts who made a difference in our world like Steve Jobs. Lol I experimented being a teller but my Gemini brain was not cut out for that. I would round up or down when counting coins. I am wired to focus on the big picture. I had a few odd jobs before I finally got myself planted at AT&T and moved up the corporate ladder. For a while, it was a lesson in humility for me when I had to work with Managers who could be amazingly petty. Dr. George King taught that every job we do is a yogic practice. It takes the right attitude and commitment to complete every task to the best of one’s ability and so I strove to be the best I could be at my outside job, and did eventually get to a very nice space there.

We’d love to hear more about the organization.
The Aetherius Society is an international Spiritual Brotherhood, started in England in 1955 by Master of Yoga Dr. George King who was an early contactee from the 1950s. Our organization is a registered 501(c)(3) non-profit, religious, scientific and educational corporation, established in California in 1960. We are the world’s oldest UFO organization which is still active with a focus on the spiritual aspects of UFO. We are dedicated to help raise individual and global consciousness as well as bring healing not just to individuals and humanity as a whole, but also to the Mother Earth.

Our spiritual path, now called King Yoga to honor Dr. King, is a path of global healing and personal growth. The path comprises of three main aspects: Truth through the Cosmic Teachings delivered through advanced Masters from beyond Earth through Dr. King as a medium as well as Dr. King himself and the esoteric teachings from the traditions on Earth; Advancement through simple yet potent Spiritual practices including prayer, mantra and pranayama; and Selfless Service, which is the most important of the three. Individuals are empowered with unique tools through King Yoga so that they are equipped to help the world as well as themselves especially in these days.

What sets this path apart from others is that King Yoga is first and foremost designed to help humanity as a whole rather than the individual. It is for spiritual aspirants who are serious about doing something to help bring balance to world karma though actions. Yet paradoxically, this is the quickest way you can evolve yourself as well.

Is our city a good place to do what you do?
First of all, there probably is not another non-profit business like ours and there is a lot of need for our service. However, if you are talking about a base for a spiritual organization, yes, it is. Los Angeles is very diverse and eclectic in terms of spiritual beliefs. In these days on Earth, the most important work to be done spiritually is not for yourself in isolation but to help others in conjunction with yourself done in the clatter.

The following is an illustration of one of the ways we help the world, which is probably the simplest yet most potent way one can make an impact. Our Headquarters is one of several centers worldwide which offer a unique way for anyone to join in to invoke spiritual energy using mantra and prayer, where this energy is stored in a crystalline radionic battery. The stored energy is part of an energy reserve which is released to the world in times of world crises including the current Covid-19 pandemic. We would encourage any like-minded individuals to join us. By joining together, the energy output is potentized exponentially which is well known.

Since 2009, we have been organizing a large interfaith event called World Peace Pilgrimage on a sacred mountain called Mt. Baldy. The LA Times published an article about that. Every year we are having an average of 100 people from different faiths all joining together often over a few locations on the mountain performing different rituals to bring greater light and peace to our world. It is a very inspiring event! 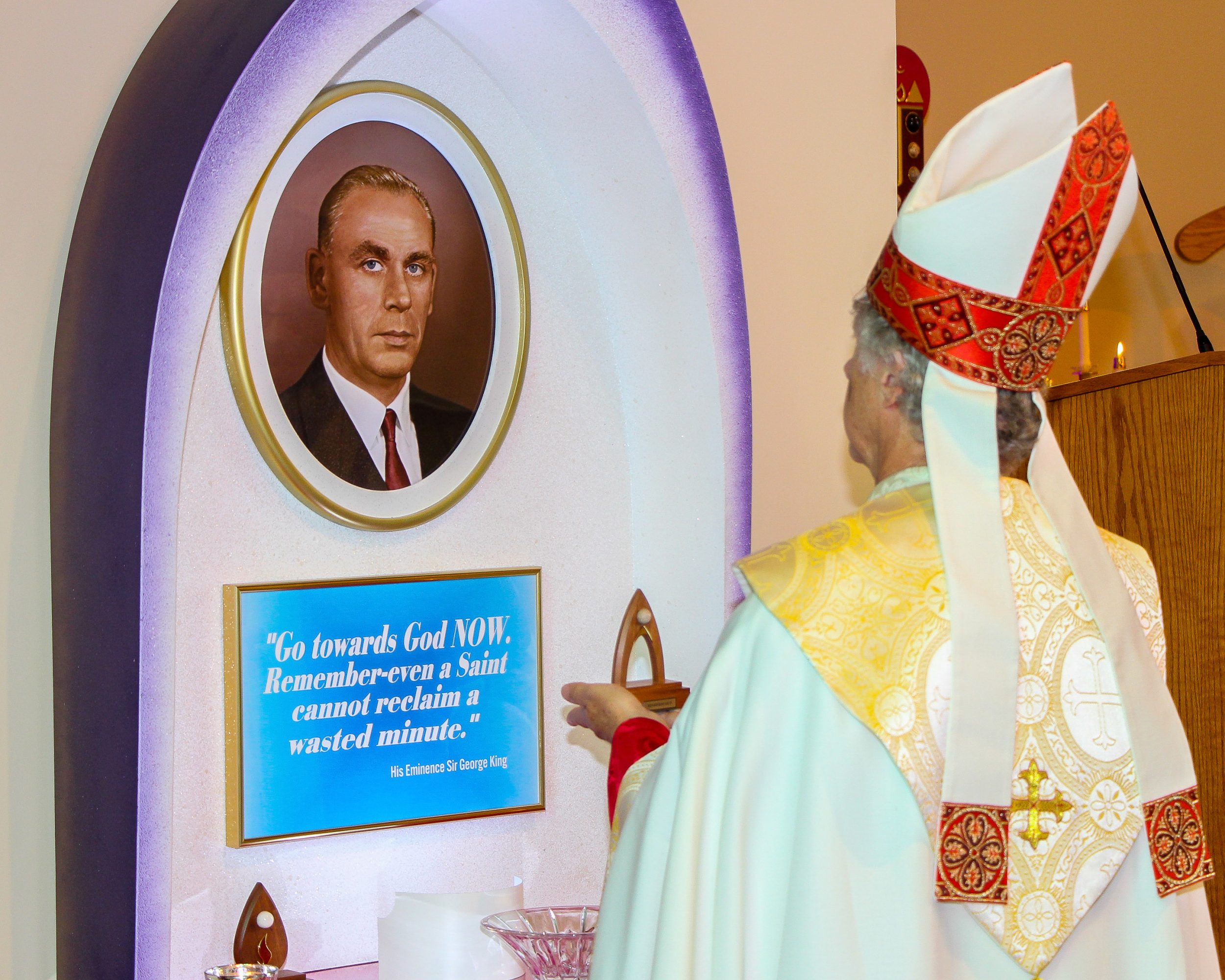 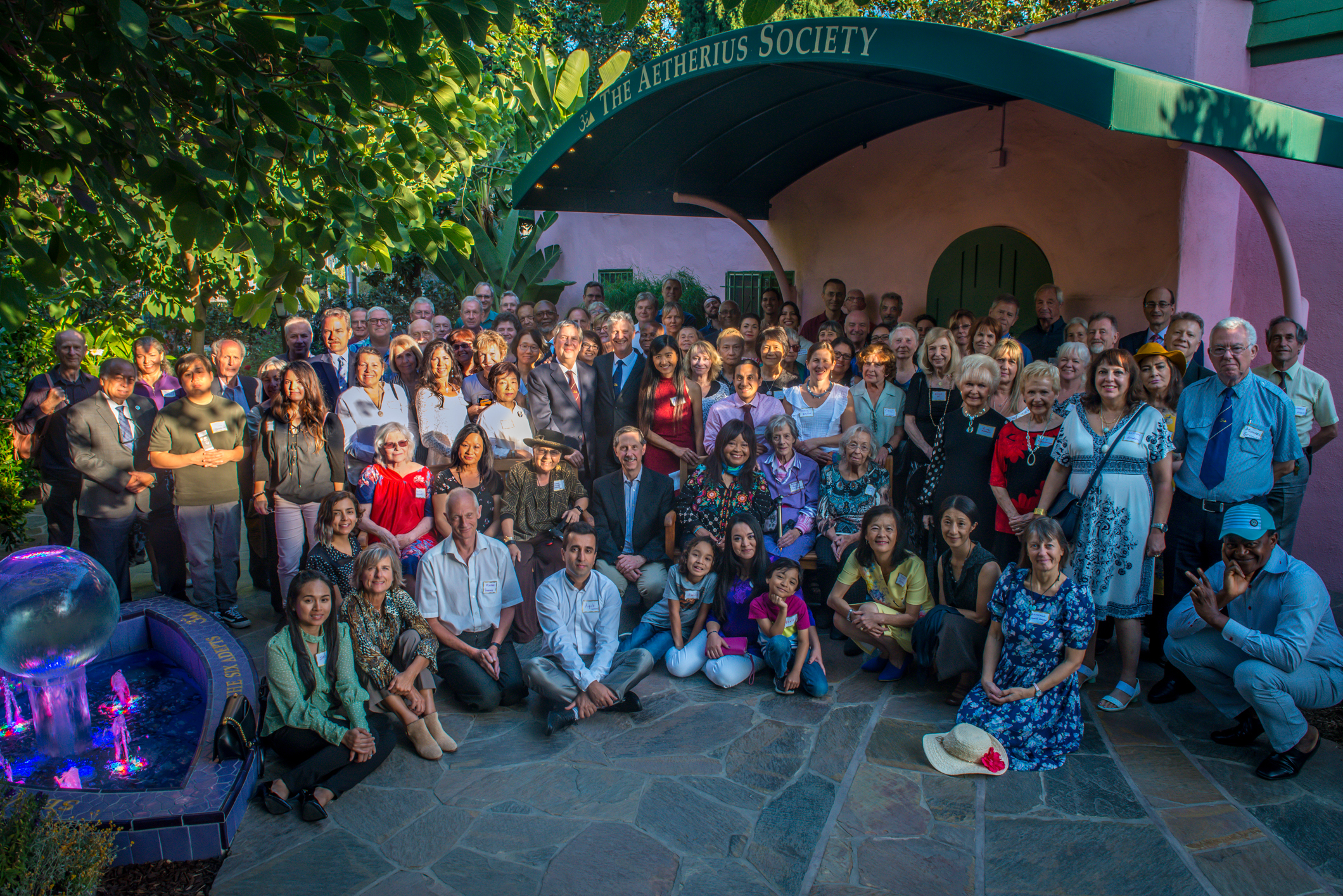 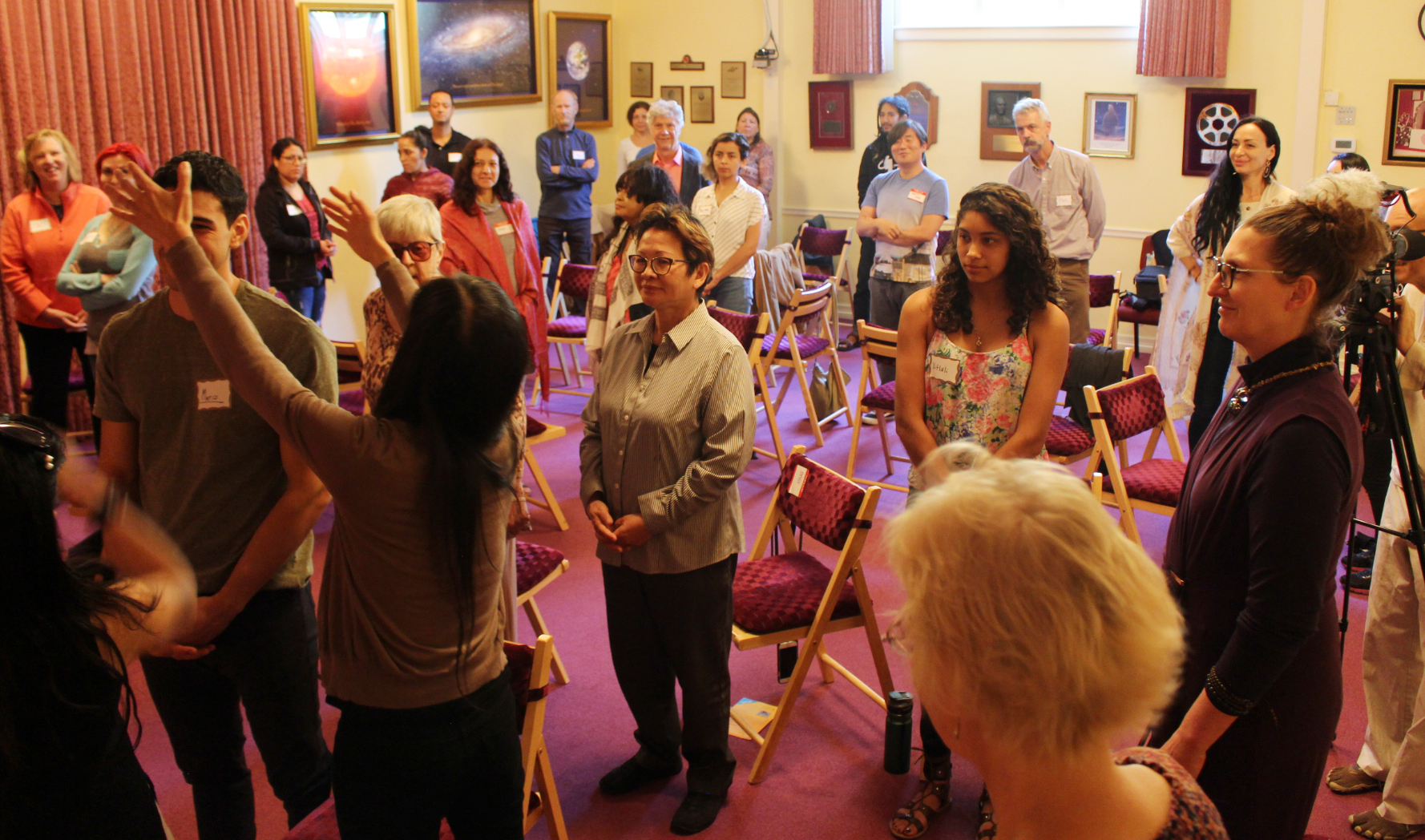 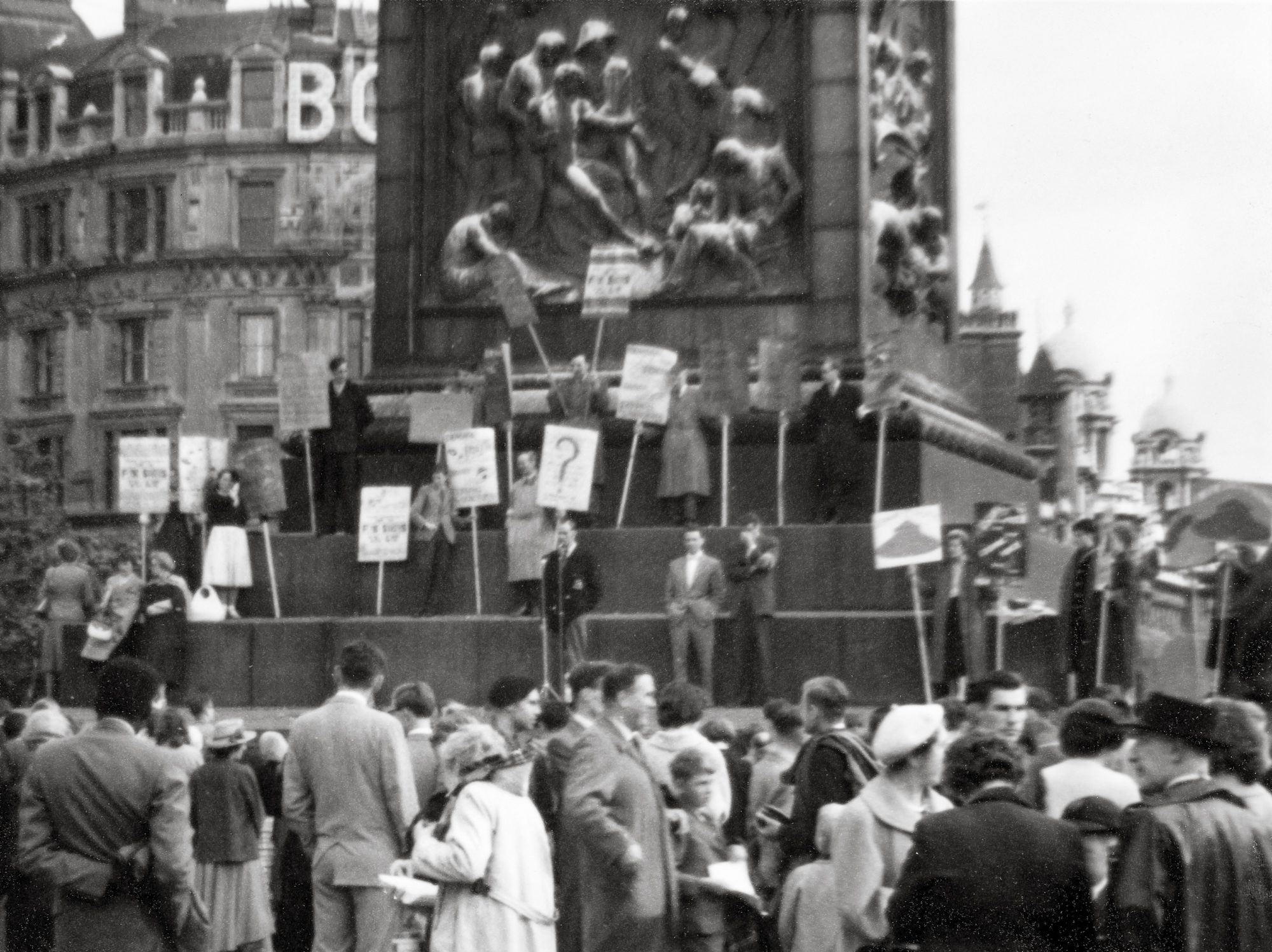 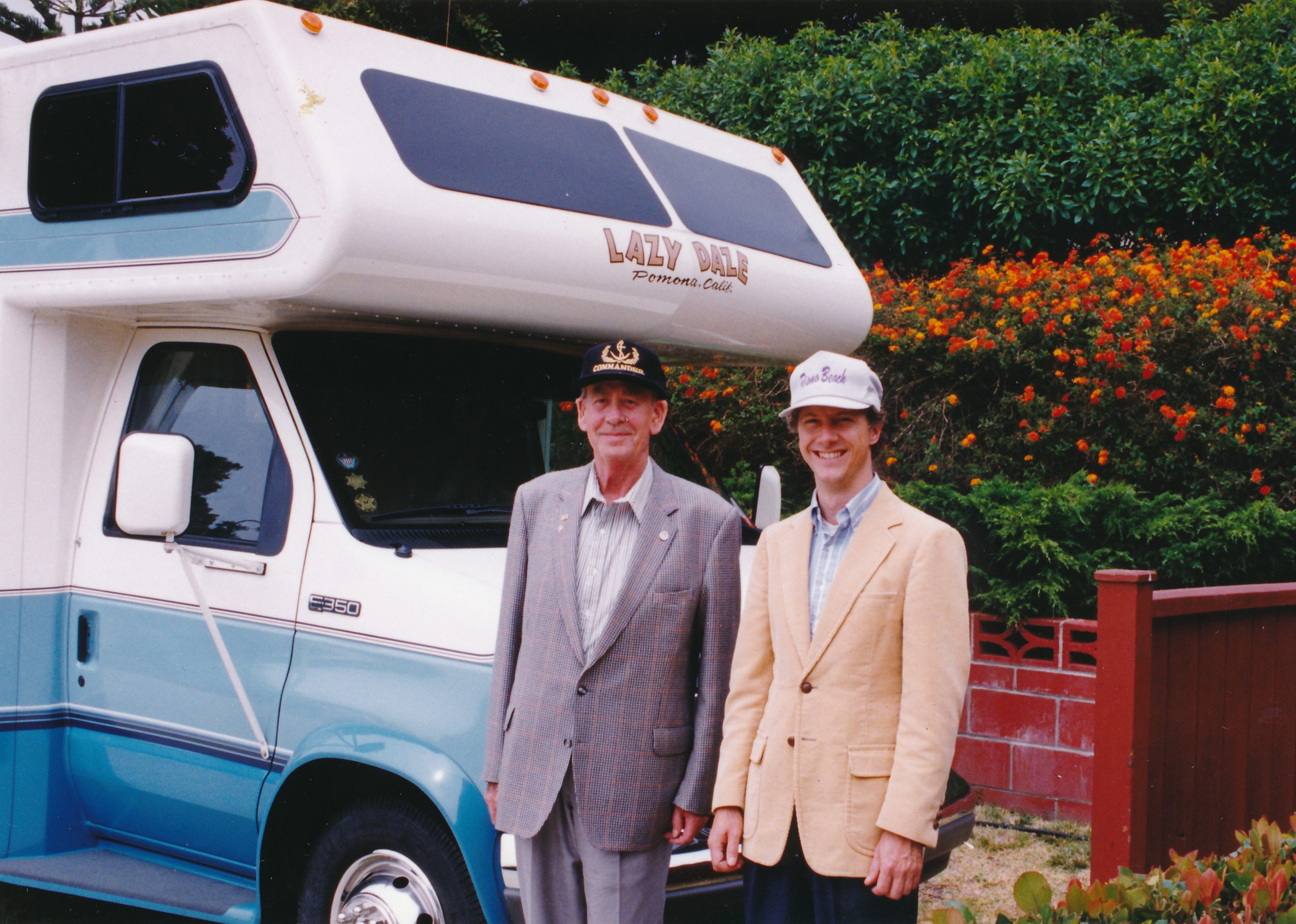 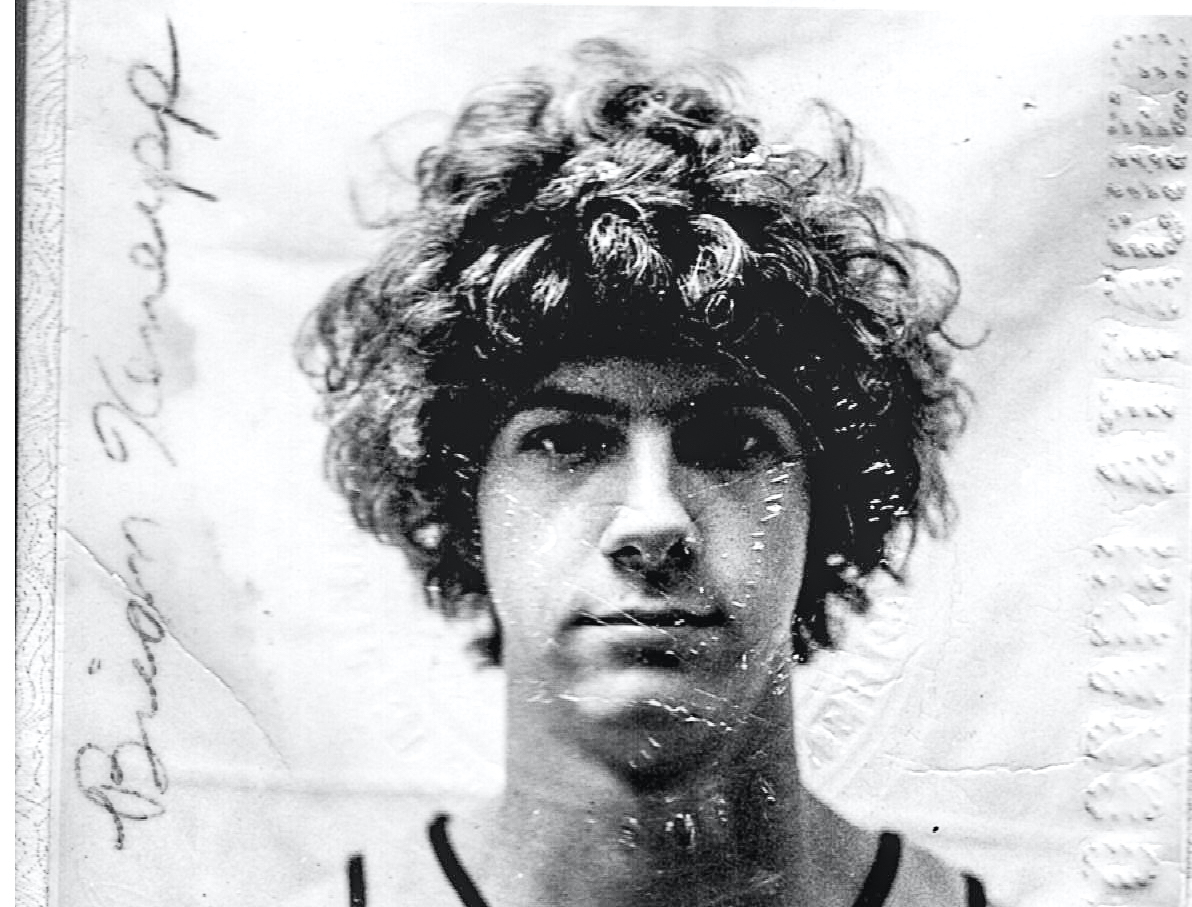 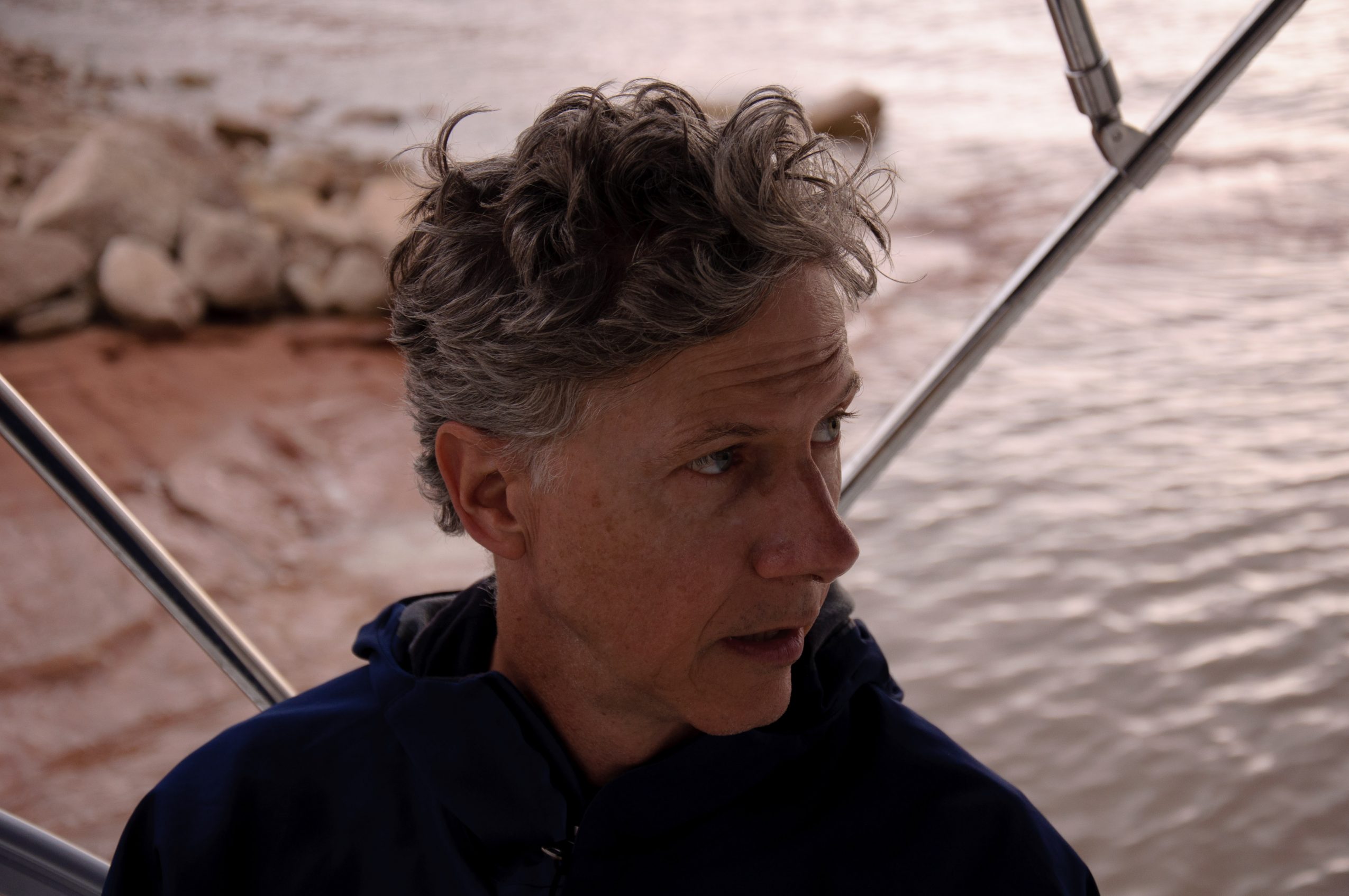 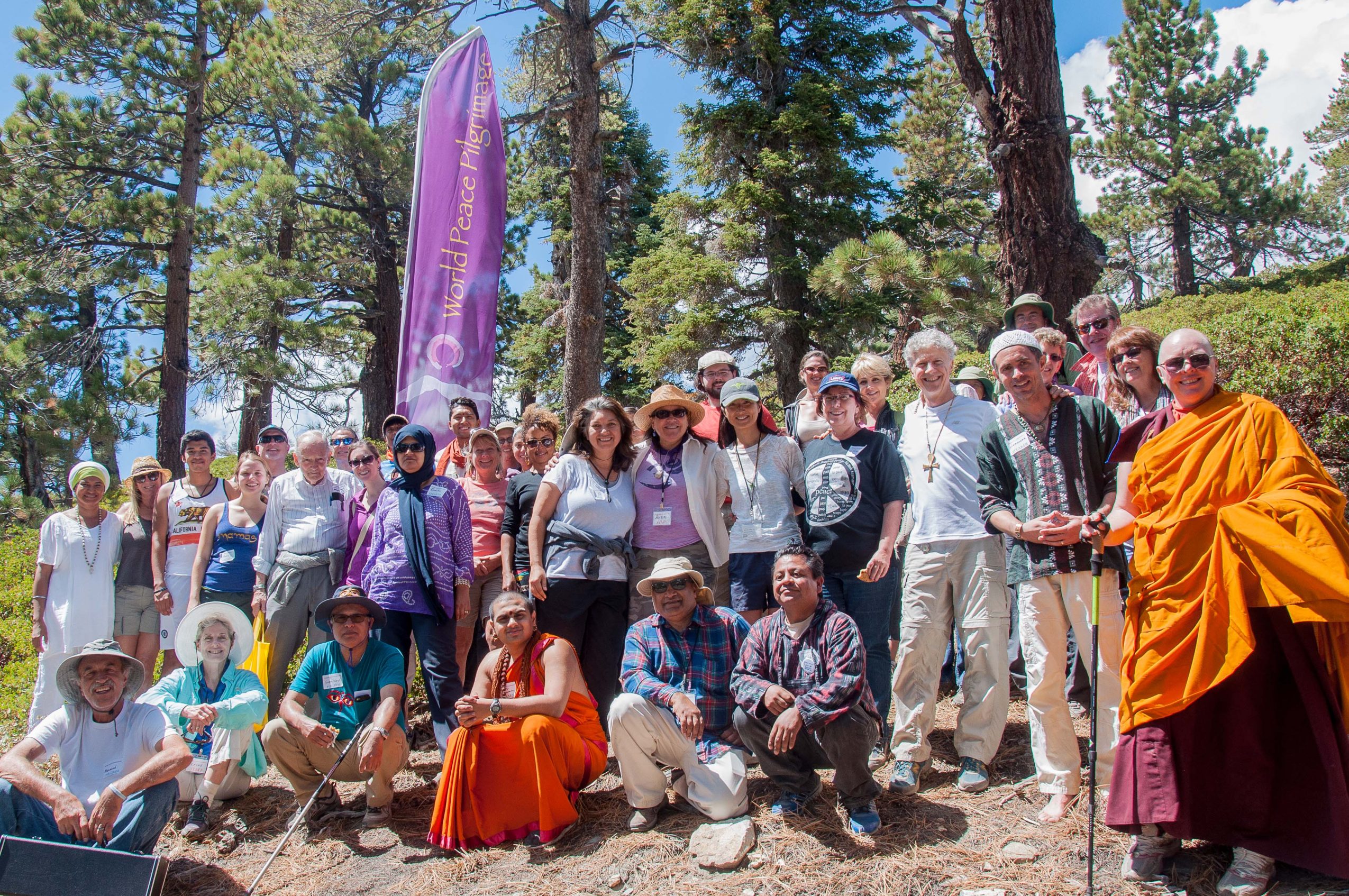 Image Credit:
The photos showing more than one person would have a credit belonging to “The Aetherius Society”. Other than that, the credit info would be “Brian Keneipp”.