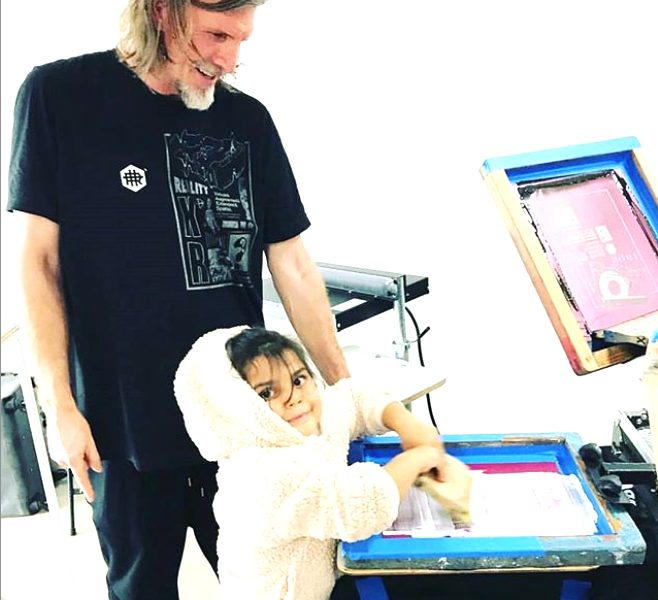 Today we’d like to introduce you to Brandy Flower.

Thanks for sharing your story with us Brandy. So, let’s start at the beginning, and we can move on from there.
Hit+Run was founded by me and my college friend Mike Crivello in 2005. We first met in art classes at Cal State Fullerton around 1992. Mike was into hip-hop, and I was a rocker who worked at a record store in Tustin called TOP 10. We made mixtapes for each other, where he introduced me to Freestyle Fellowship, Fat Jack and the LA underground, I turned him on to The Velvet Underground, Nirvana & more.

Mike graduated and went on to start a couple of limited-edition clothing and t-shirt lines (Subtitle, Footlong Development) while I moved to LA and worked as an Art Director for Sony Music from 1996-2005. I bought a small silkscreen set-up in 2001 to teach myself how to screenprint in my small West LA apartment. Mike was the very first friend who came over to experiment with it, and over the years many friends & musicians rolled through to get unique items made and even learn for themselves.

In Summer of 2005, a friend asked me to haul my equipment out of my kitchen for the first time and print at her backyard bbq. I invited Mike & some friends but did all of the printing myself for over 6 hours for an endless line of guests. Most folks brought a blank tee to print on, then chose from the over 20 different screens I brought, to combine and place wherever they wanted to make a one-of-a-kind shirt right before their eyes.

Needless to say, by the end of it, my back hurt so bad and told myself that I definitely didn’t wanna do that again. The next day Mike called me and expressed how awesome it was to see the entire party revolving around the silkscreen fun, then said we should start a company and do it at more parties. I shot down the idea then and a couple more times until I finally conceded and so we planned the first Hit+Run in Long Beach (where Mike was living at the time) for Saturday, November 12th, 2005 at The Blue Nile Cafe during an Art Walk weekend celebration.

At the time, Mike had his own press, and I had my kitchen table-top version, so each of us set up apart but offered up our unique combination of art & fashion experience for a few dozen friends, loved ones and future partners. Mike & I each made a unique screen, plus invited Enik, Motion, and Freedom to contribute art. The evening was fun for all (although I recall that I lost my wallet!), so Mark “frosty” McNeill, founder of dublab (also in attendance for #1) invited us to bring our mobile screenprinting project to a vinyl record fair he was hosting at The Virgil in East LA in early December. We printed out on the sidewalk, and it was a wild time.

All during this time, I was still working for Sony, but in January 2006 they offered me a job in NYC or be fired. I decided not to move, so that’s when we became even more focused on Hit+Run. We piggybacked our live printing every month or so at clubs like the Virgil with musician friends and dublab alum Daedelus, Damon Aaron, and Kutmah.

After around the 6th event, a marketing company reached out wondering if we could take the show on the road and print at parties for Red Stripe in New York, Miami, Boston, Chicago, San Francisco & LA over the summer. We packed everything on a palette and shipped it all over the country that very hot summer, and learned many things. After the tour we decided that we needed to become more streamline and start getting more professional with things, such a creating a rate sheet, budget list and more.

Any time a friend was hosting something fun in LA we offered up our services to come out for free and compliment the fun. We’d try to sell shirts but often gave almost all of them away, or even print the shirt, dress, or jacket right off someones back! From there, it started growing to a point where other alcohol and car companies began hiring us every month or so. Then twice per month and we started meeting more and more people who wanted to help out and learn.

The H+R Crew was born with more hands to do more work. We invented something unique, and it became a phenomenon as we then traveled to London, Tokyo, Melbourne and other destinations all over the United States on the regular. We flew everywhere, then decided to start permanent Crews internationally, following with more in the US and now have ten permanent teams all over the map with over 60 Crew. We’ve inspired screenprinters and artists all over the world to bring their gear out of the studio and into the public forum to share our unique magic.

In turn, we’ve inspired the public with our do it yourself method of t-shirt making. Some said we’ve reinvented the concert t-shirt, and it might be true. We’ve brought art into places (a rooftop, a boat, the side of a mountain, in a church, on a farm, the top of the World Trade center, conventions, Ted Talks, bar mitzvahs, and more) where it wasn’t so easy to have something happen. We’ve infused the creative spirit into every shirt and made a happy art memory with each guest that I hope they carry for a lifetime.

Overall, has it been relatively smooth? If not, what were some of the struggles along the way?
Mike & I invented the concept and playing field for live screenprinting, and there was no handbook, rules, guide, examples or anything to learn from nor base our journey upon.

We’ve made zillions of mistakes but have persevered through, learning and getting better each day. It was hard, frustrating & confusing, at times plus got competitive & challenging with every year. Together we rose to each occasion.

Mike & I invented the world’s first small portable six-arm silkscreen press that is our magic tool we took all over the world, leading the way and innovating the game. We are both artists, not trained businessmen, so it has definitely been challenging to hold our own in corporate America and stand up for artistic respect, while still providing a service.

Please tell us about HIT+RUN.
We created Live Screenprinting, which is now a common place feature at events all over the world. Nowadays it’s almost an equally commonplace fixture as the DJ or an open bar at a party… our participation & long lines often rival those in popularity.

We screenprint t-shirts, tote bags, posters and more, all the while our service falls under the corporate banner of “experiential marketing.” Not only is each guest given a free personally customized souvenir to take home, but gets to interact in the process, creating a positive deep-rooted unique memory of the experience that they can tell their friends, all empowered by the process of art.

Screenprinting is an old process that goes back to China around 800AD. Parts have changed, but the concept is the same. Most people have a screenprinted t-shirt or poster in their possession but never thought about how it was made. Bringing this process out of the warehouse or studio and in front of people’s eyes has ignited their respect of this vintage art form.

We truly love screenprinting and what we do and love sharing it with the public as well. It often comes off as a type of magic when the image suddenly appears on each garment, amazing guests, young and old, no matter when in the world we might be.

If you had to go back in time and start over, would you have done anything differently?
There is much to be done, but not many regrets. Each day we keep pushing to the light and have grown each year by leaps and bounds in overall business plus knowledge of what we are and where we need to go. 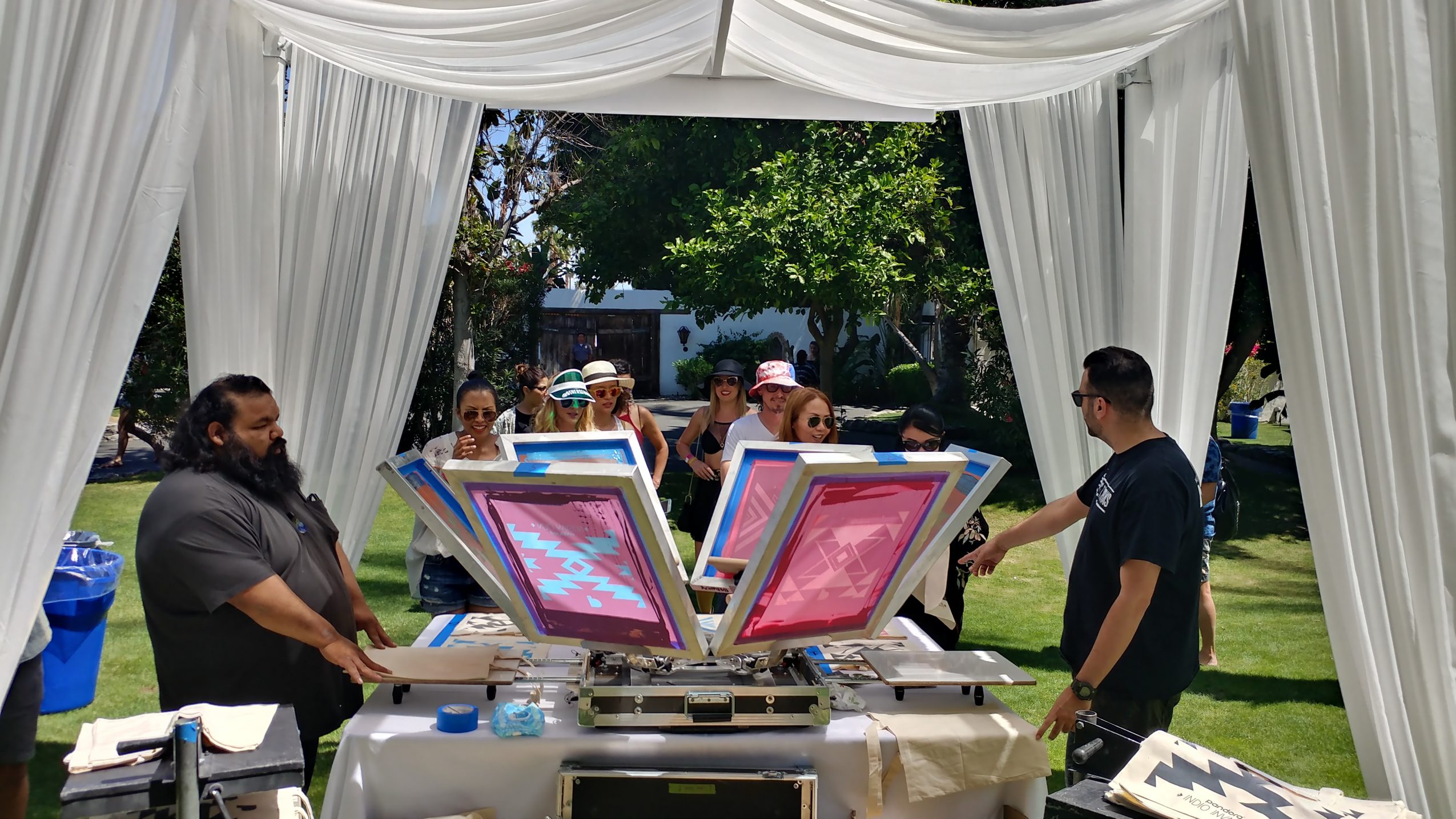 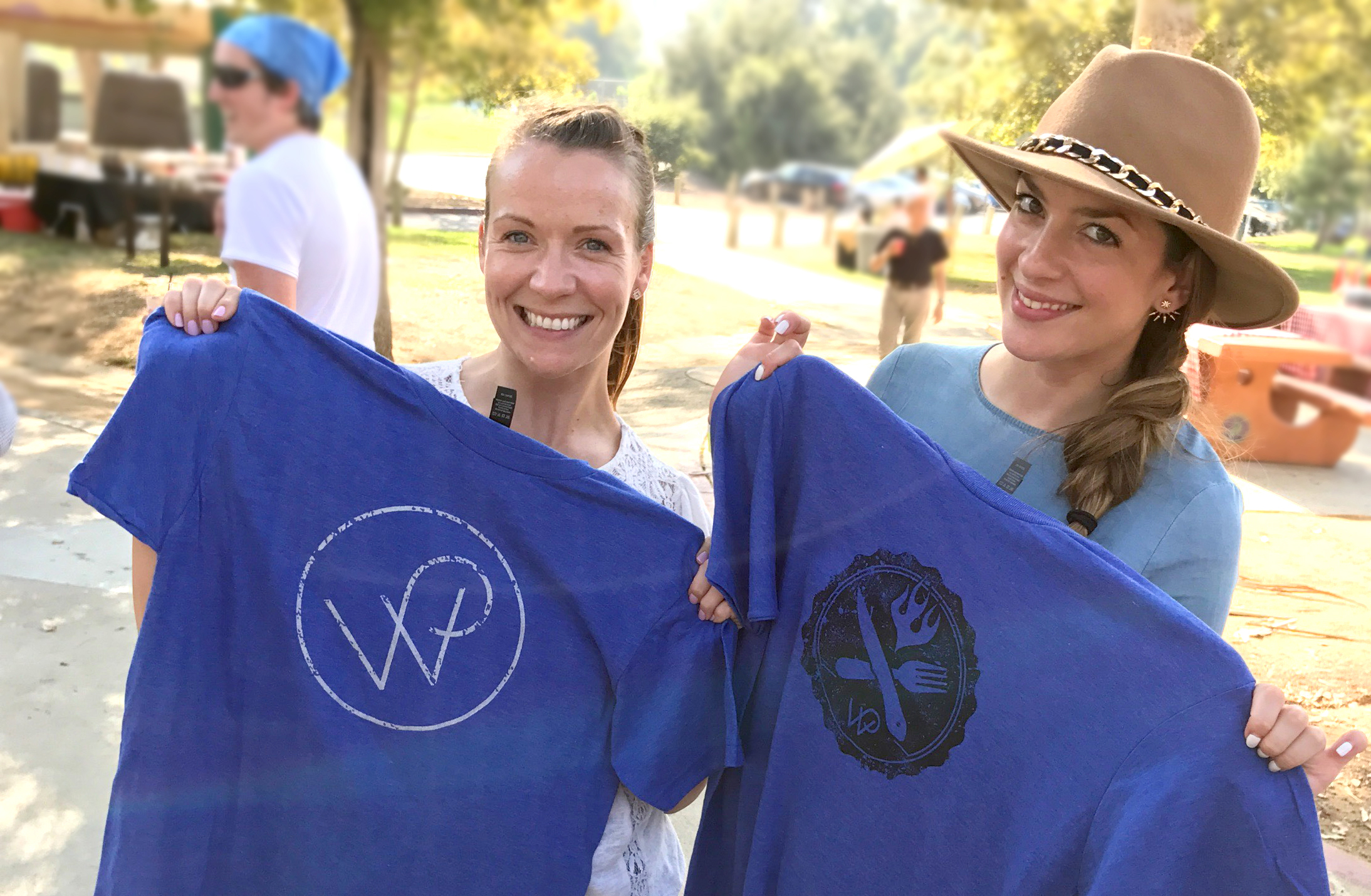 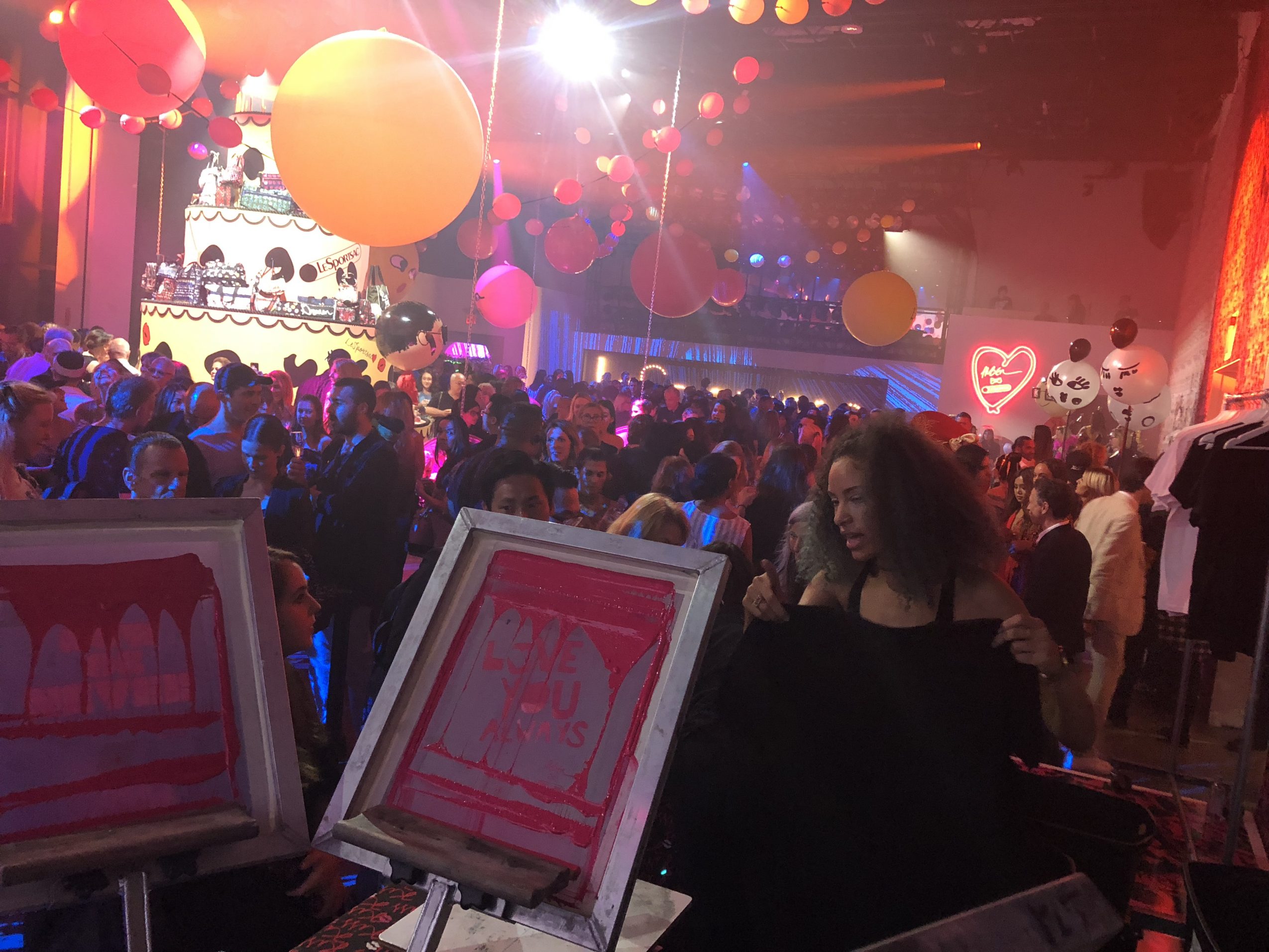 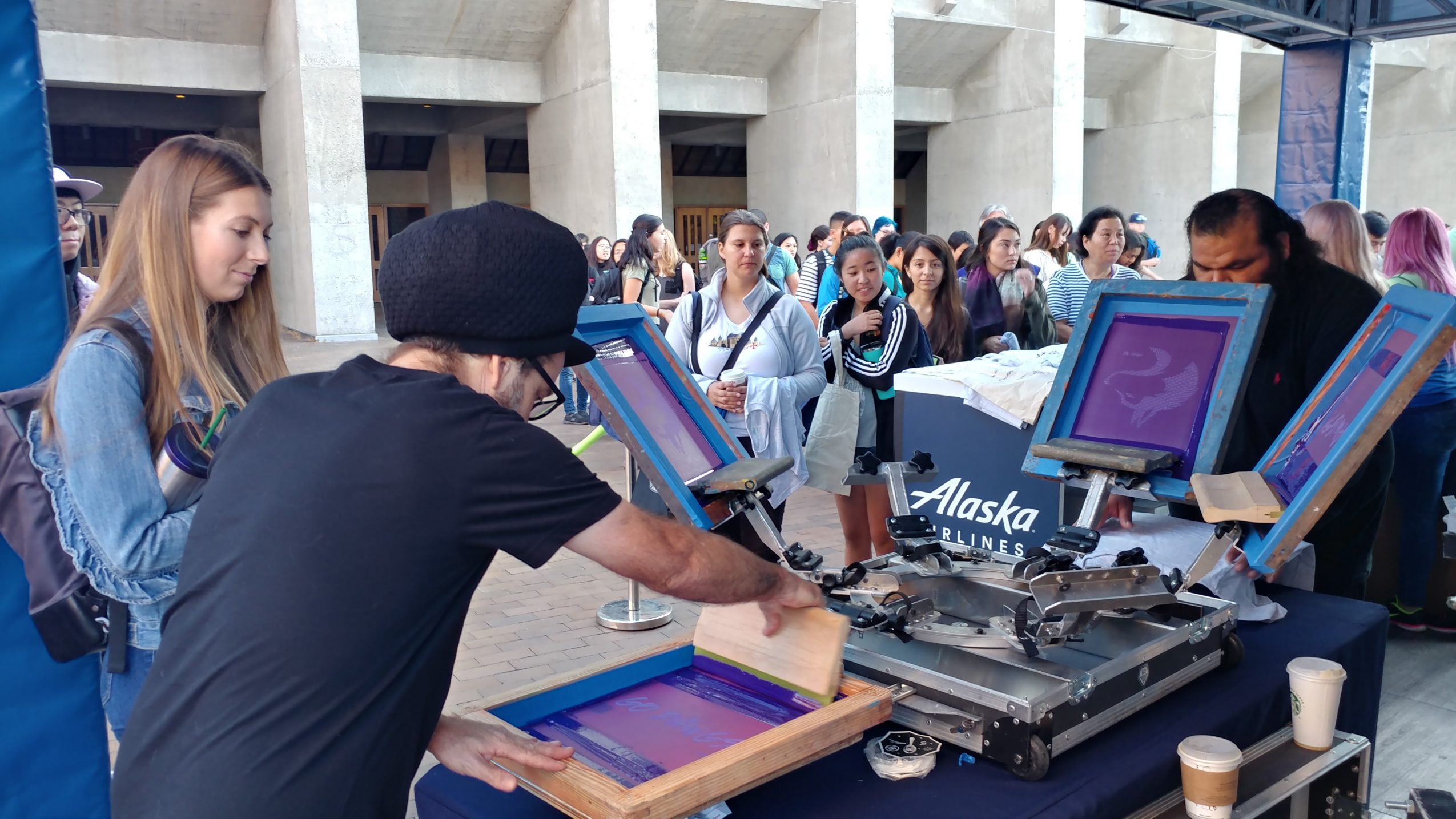 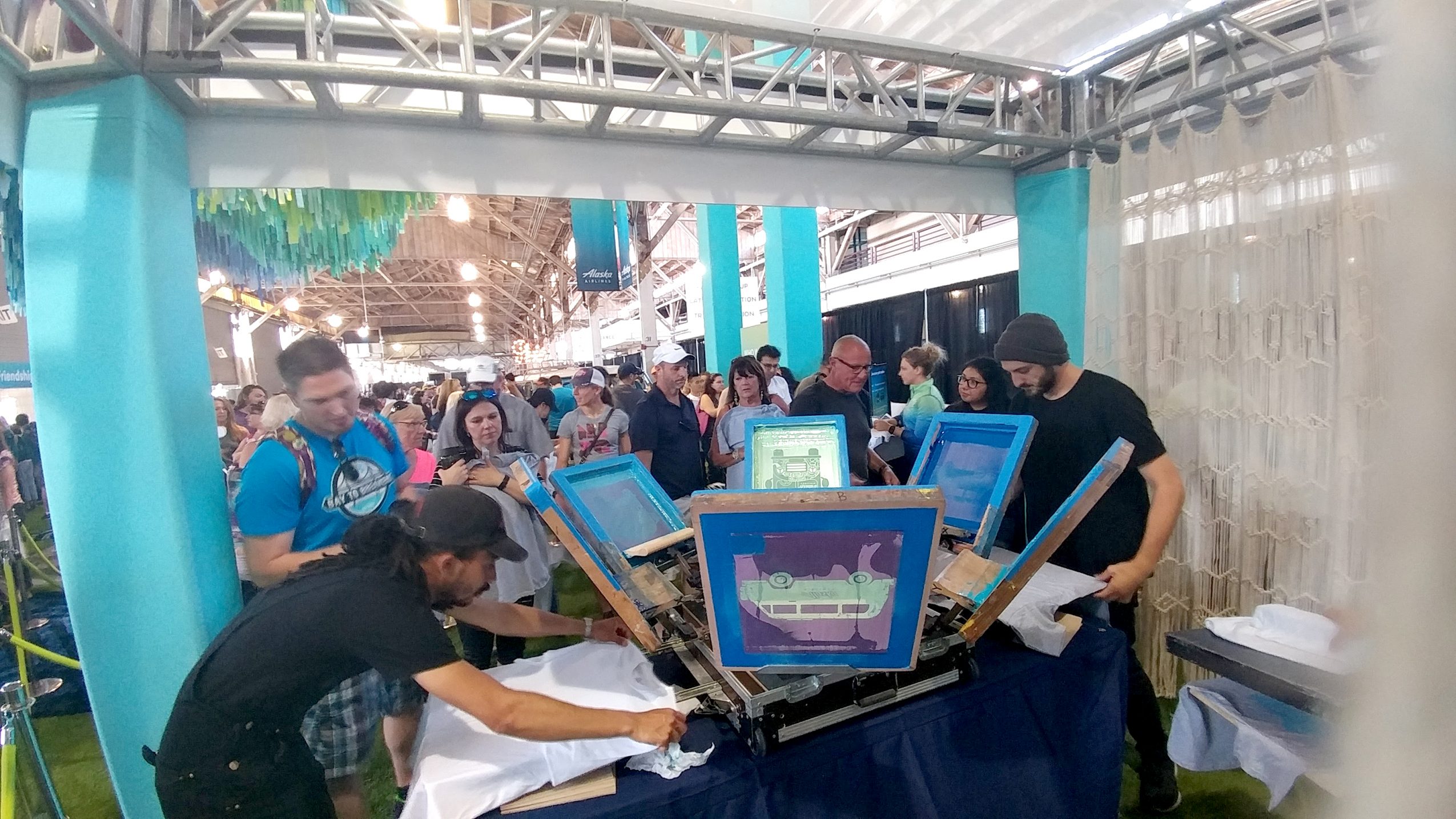 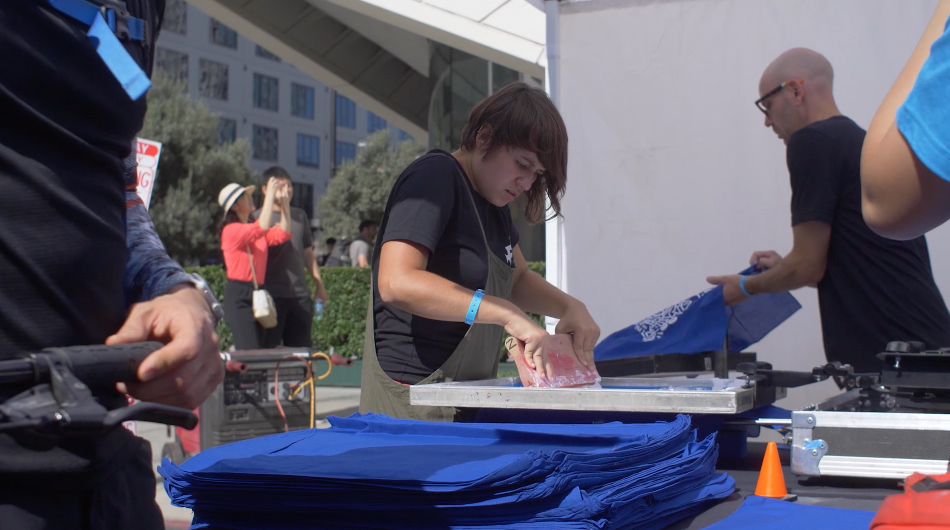 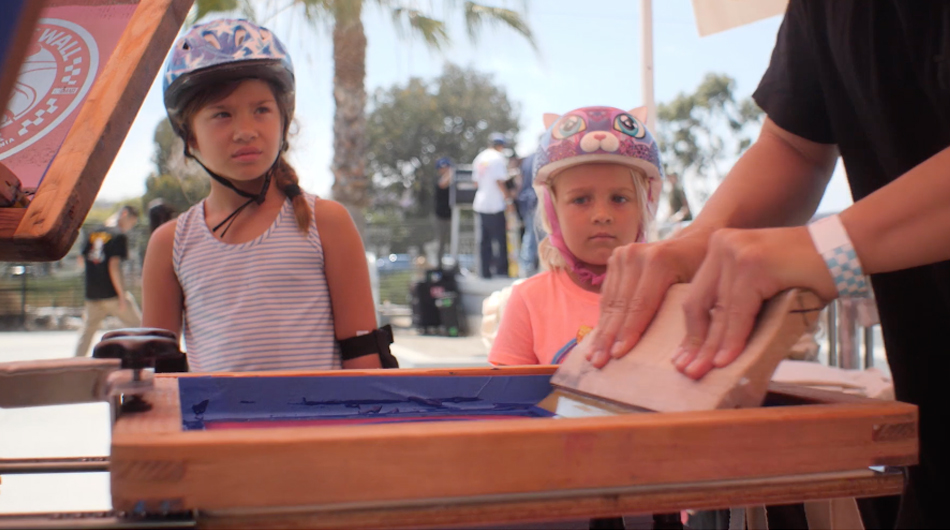 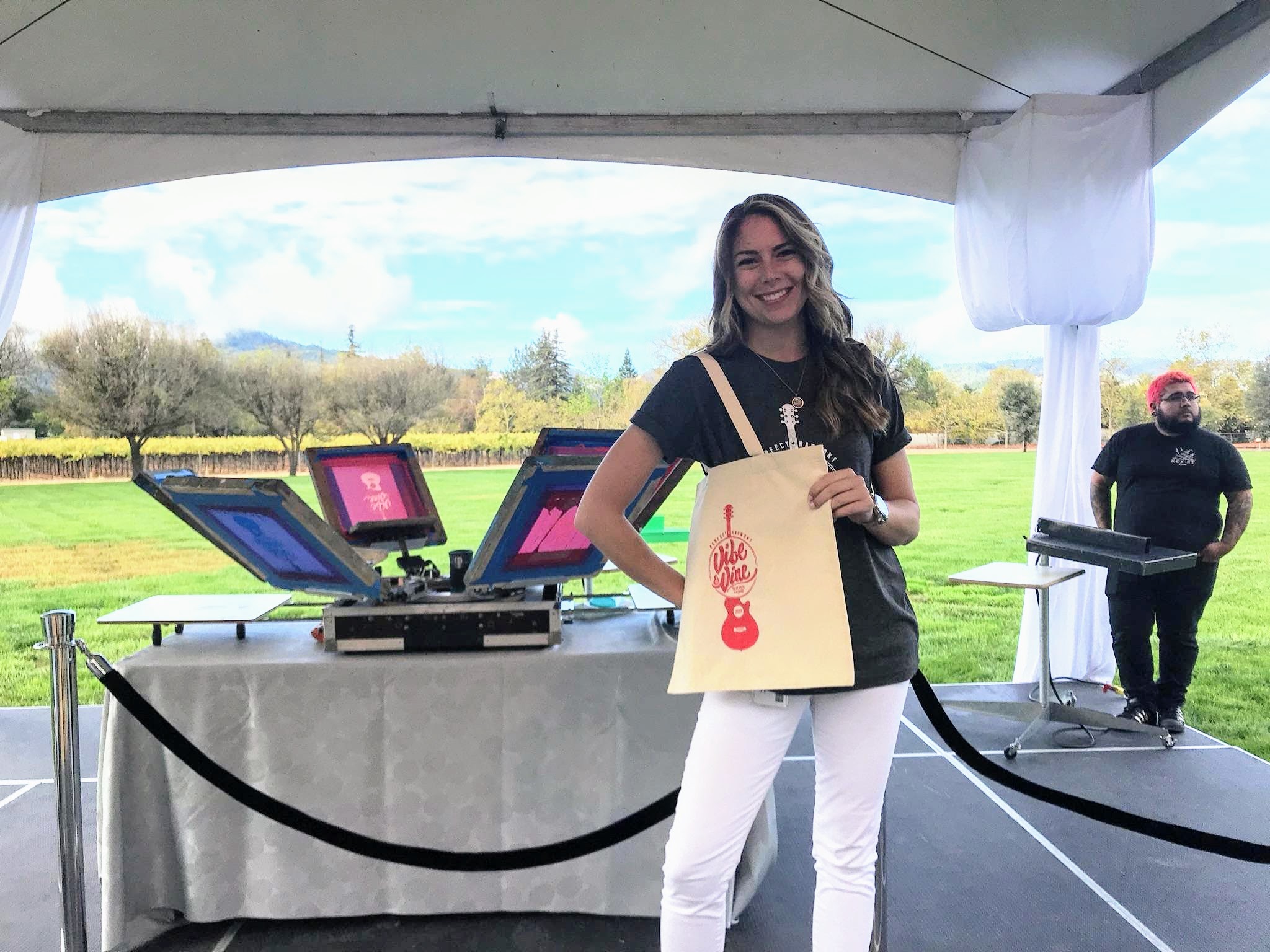