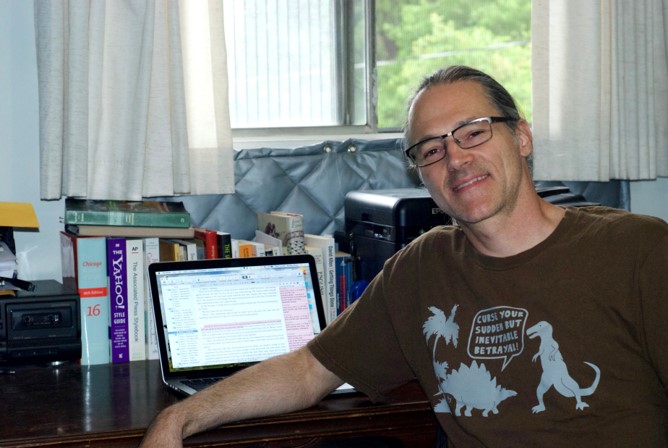 Today we’d like to introduce you to Brad C. Wilcox a.k.a. Tristram Lowe.

Brad, can you briefly walk us through your story – how you started and how you got to where you are today.
The first story I can remember writing was about a haunted house. I believe this was in first grade. I wrote it in one of those Big Chief tablets in careful but nonetheless messy and smeared pencil. It was an adventure wherein some spooky adversaries had to be overcome. Today, I essentially write the same kinds of things.

In my heart, I’ve always been a writer. And in spite of my many artistic endeavors (or perhaps, distractions) over the years, writing is what I always come back to. I think in the beginning, I didn’t have the confidence to pursue a career as a writer, so I went in other directions.

Out of high school, I went to the Colorado Institute of Art in Denver, because the only thing I thought I was any good at was drawing. But I wanted to draw monsters and fantasy figures; so creating ads didn’t work for me. Six months later, I left, saved some money working for my parents and decided to be an actor.

I moved to Los Angeles to attend the American Academy of Dramatic Arts, where I fell in love with acting. And over the next couple of years, I got better at it. I did some short films and theatre, eventually earning my Equity card. But in the middle of that, I took a left turn, and did what any easily distracted creative type would do — I started a band.

One band led to other bands and solo projects. I wrote a ton of songs — the lyrics were always the most important thing. I recorded a couple of albums and played clubs all over Hollywood and the Valley. It was a blast. But at some point, the love of playing got overshadowed by the unlikelihood of ever having a music career. So I moved on.

But I still wasn’t ready to be a writer, I guess because I turned back to acting. I did more theatre, film, and TV, this time earning my SAG card. I currently still act, but primarily in voiceover. I have narrated about a dozen audiobooks, and have performed in a few audio drama podcasts. I love reading audiobooks because I get to tell people a story. All of my distractions have that in common: I get to be a storyteller.

Throughout all of this, I had many “day jobs” but one, in particular, I have to mention because it has been amazing and transformational. I was a fencing coach. With my love of fantasy fiction, sword fighting is right up my alley and the lessons there alone are life-changing, but teaching it is an experience that changed me even more dramatically, and I will always treasure that time. My students mean the world to me.

Therefore it was a very difficult decision to walk away from teaching and focus my time on a writing career. But I had to own up to and embrace what I really love. I jumped in headfirst, finally granting some freedom to the multitudes of ideas, characters, and epic musings in my head. Some of them have been with me for decades, and I am finally putting them on paper.

I chose to write under the pen name, Tristram Lowe, because there is already a published author named Brad Wilcox, and because I wanted something unique (my website is the first thing to come up in a Google search) and something with a personal meaning to me (Tristram was a Cornish knight in the Arthurian tales, and I have Cornish heritage). The drawback is that some people find it difficult to spell or pronounce.

The reason I became a publisher was primarily to publish my books. I learned that the vast majority of traditionally published authors still have to have a day job. I don’t want one of those. I’d rather earn a much larger piece of a smaller pie. This means a hell of a lot more work, however, as I’m in charge of every aspect of publishing: all the business stuff, marketing, cover design, and so on. I would always rather be writing, but I still find being a publisher a rewarding challenge.

And, although I haven’t done so yet, I am excited to one day publish other authors’ works as well. Once I get my own books selling well, I plan to open the doors to submissions.

Has it been a smooth road?
I’m really just getting started as an author/publisher, so I’m still learning. There were struggles in the beginning that I wasn’t prepared for, such as formatting the manuscript for print. I had no idea there so many different kinds of PDFs.

Writing the book is its own challenge, and then understanding that most of the writing process is editing what you already wrote. Getting the first draft finished before you start editing is crucial.

And of course, I had dreams of putting out my first book and having it be wildly successful, but that is a rare lightning strike and it didn’t happen. So I spent far too much time banging my head against the computer trying to figure out how to sell more books. And while I had some success with ads, I’ve spent more there than I’ve earned. So I’m learning where to put my focus. And right now I am focusing on writing, so I have more “product” — I hate to call it that, but as a publisher, I have to see that side. And I have no shortage of stories to tell, so it works out well for me. With more books out, I’ll be able to attract more readers. Readers love series, as do I, especially in the fantasy genre, and my book Headless, is an urban fantasy. I’m currently in the fifth draft of the sequel, which is called No Promises Large Enough, and I’m planning for a late summer release. The series is called The Ghost and the Mask.

I’m also just about ready to release a children’s picture book called The Wrong Monster, under my kid’s imprint, MAK!. That has been a learning process too, as dealing with illustrations is a bit more intensive than text. Images on the computer don’t always look the same in print.

As I learn what works and what doesn’t, I’m taking notes so that when I do take on other authors, I’ll have a system in place that will get things running smoothly from the beginning and get them some healthy sales too.

So let’s switch gears a bit and go into the Mortimer & Ambrose story. Tell us more about the business.
My business, first and foremost, is my writing, and Mortimer & Ambrose was born from that. As a writer, as Tristram Lowe, I write stories from the viewpoint of underdogs and overlooked heroes. I have no interest in reading about perfect protagonists who are great at everything they attempt and who overcome adversity with ease. Real people are flawed. They screw up, make bad decisions, and aren’t always loved and respected by everyone. But real people can still be heroes. So even though my novels do have fantastic elements and supernatural powers, they come with some baggage. And I think that makes them far more interesting.

As a publisher, with Mortimer & Ambrose, I plan to publish fantasy in all its incarnations, from epic quests to magical realism and everything in between. But I am very discerning, even with my own works. I will not publish anything of my own that hasn’t been thoroughly picked over by my team of beta readers and my own editor.

I got a five-star review from Portland Book Review for my first book, and of course I put a quote from it right on the cover: “Tristram Lowe’s novel, Headless, is a captivating mystery with just the right touch of paranormal.” That was really nice to get. So I guess I’m doing something right.

I will not publish any fantasy book that hits my desk. I want something that moves and excites me, something that makes me want to ignore all my other responsibilities while I devour it. But that said, if I see a big enough spark, I’ll work with authors to make it into some stone-melting dragon breath.

I will also never publish a book that has not been thoroughly edited. And the look and feel of a book is very important to me. It’s much more than just a stack of paper with words. I care about the design elements and layout and spend a great deal of time on those things as well. I want Mortimer & Ambrose to be associated with quality in all aspects.

Lastly, I aim to change how writers get paid. Currently Mortimer & Ambrose has no budget for advances. I hope there is some day, but either way, small publishers have to take a chance and spend money upfront on unknown authors. So they have to recoup that money before the writer sees a dime. This makes perfect sense. But I want to pay the writer from book one. By being extremely choosy with what I publish and with a system of royalty payout that I’m devising, I believe I’ll be able to do this and recoup my losses along the way.

It’s important to me that writers I publish have a great journey in their career. So often writers are thrilled to get picked up, but then they never see a royalty check and it becomes a huge letdown. I want writers to get a check the very first month.

How do you think the industry will change over the next decade?
People always want a good story. And I think we’re a long way away from the novel-writing machines in Orwell’s 1984. So we’re going to need writers. And writers need to be published.

But there are some changes that have already started that I think will continue to grow. For one, there are lot more minority, women, and LGBT writers getting recognition, and I think that is fantastic. For too long, their voices have not been heard. I think this scares a lot of white men (of which I am one), but I embrace it as an overdue turning of the wheel. Ultimately, I look forward to it all balancing out, but right now, we need to give voice to those who’ve been ignored and marginalized.

I think audio is going to continue to grow, and of course, Mortimer & Ambrose produces audiobooks too. My years of acting came in handy when recording the narration for Headless.

As technology expands exponentially, so do the ways we can consume stories. With VR, AR, and AI getting more prevalent, I think we’ll see even newer ways to “read” come our way soon. But at its core, it will stay essentially the same. Stories have been told verbally for millennia, and the written word isn’t going anywhere, though the device you read or listen on will certainly evolve. 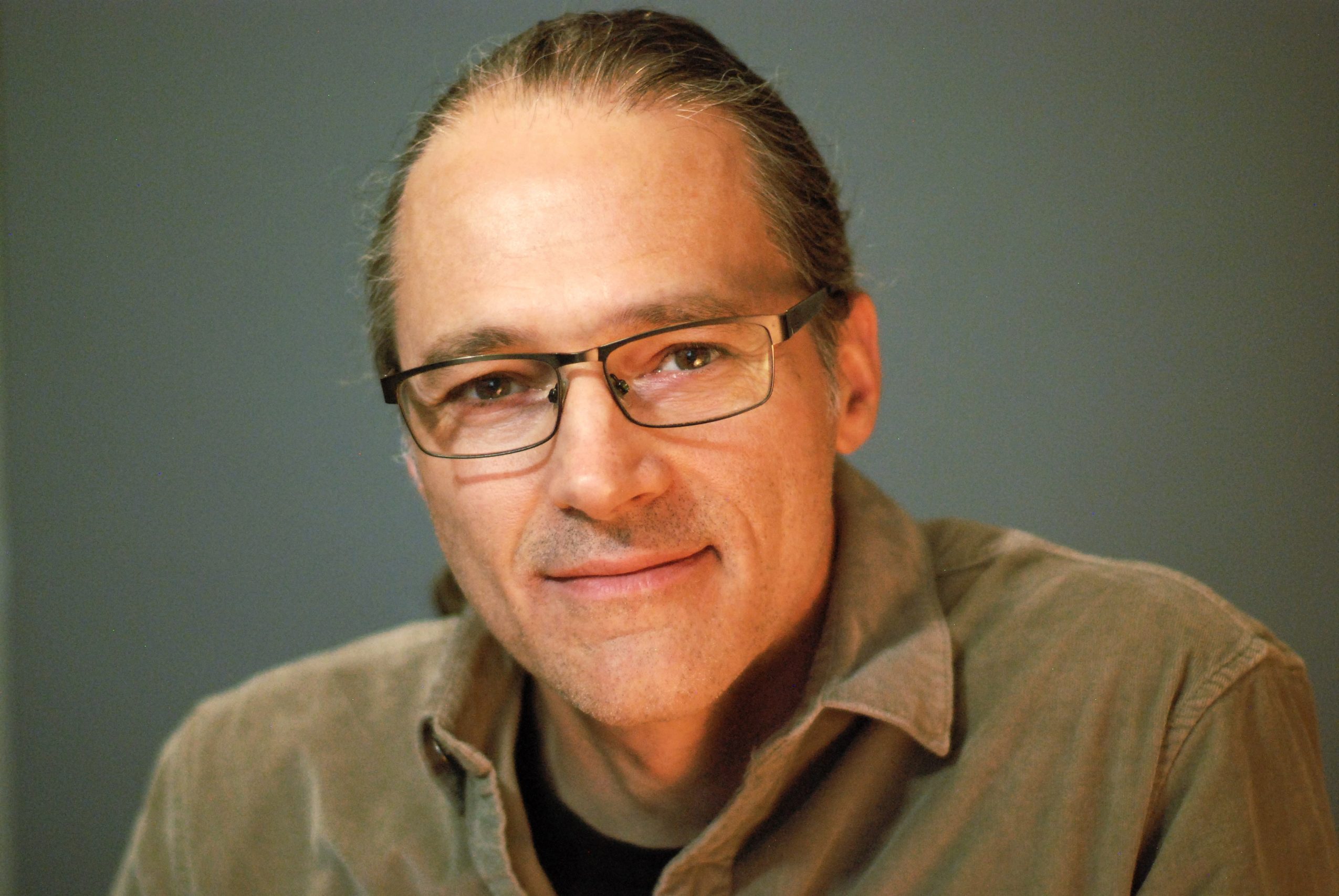 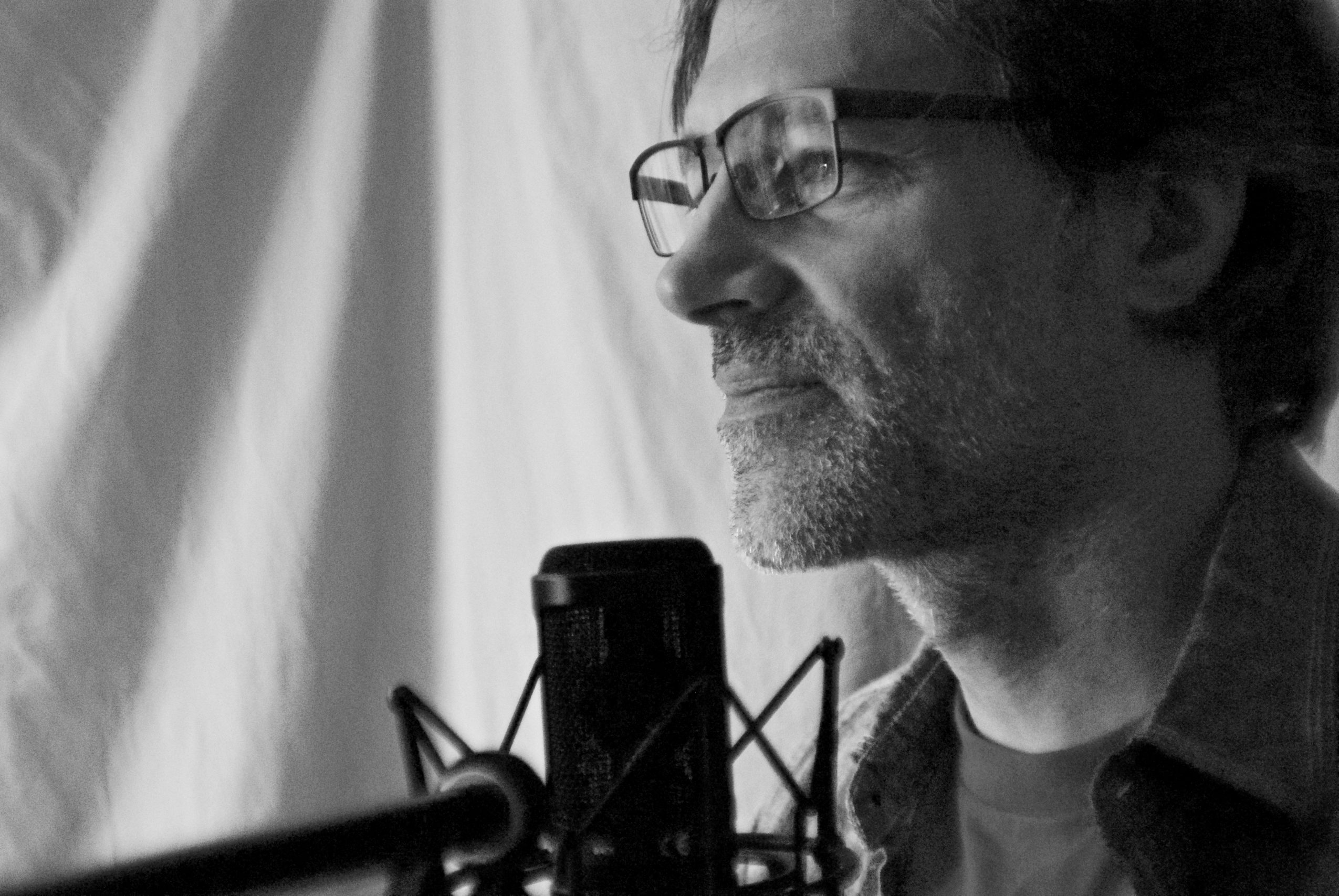 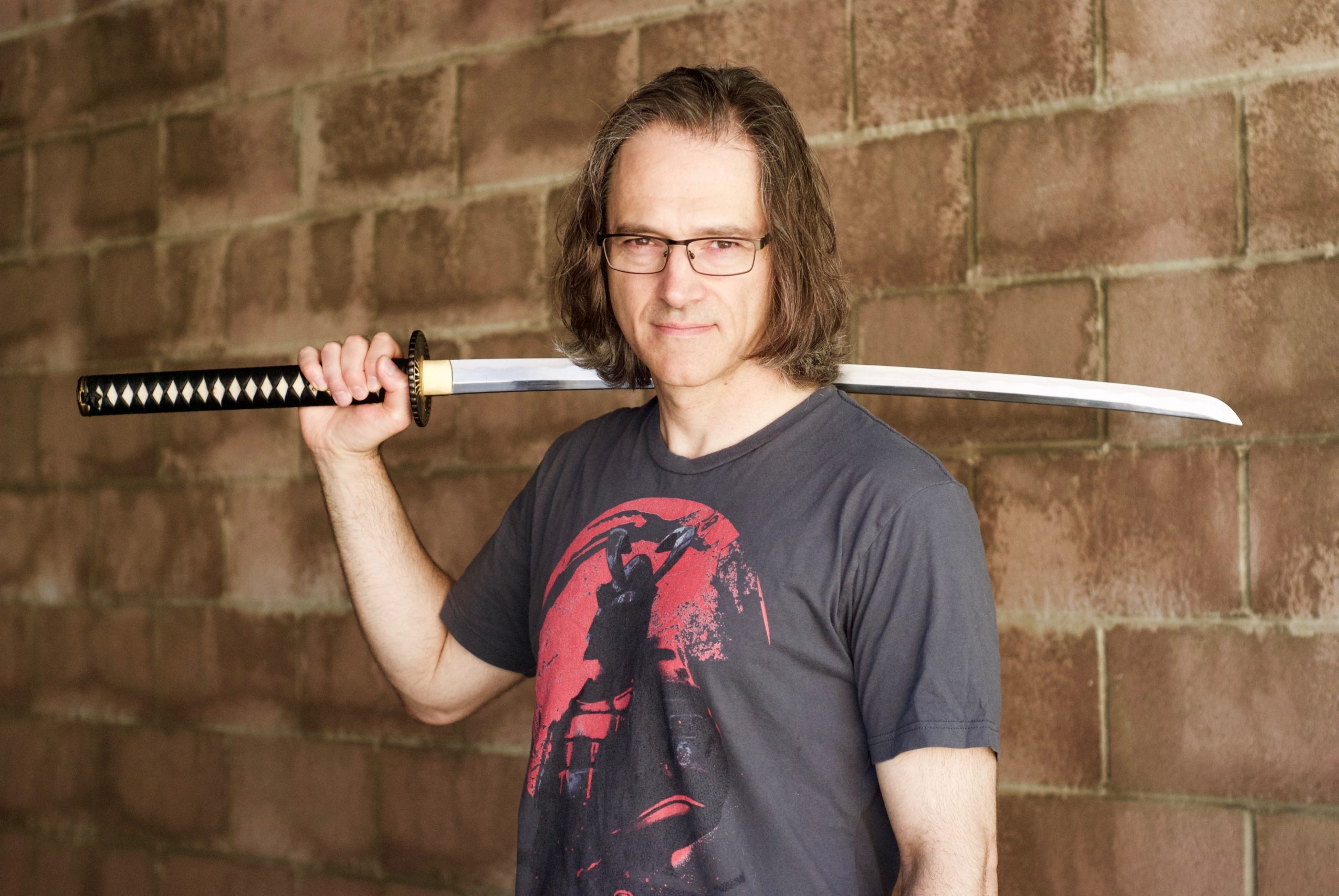 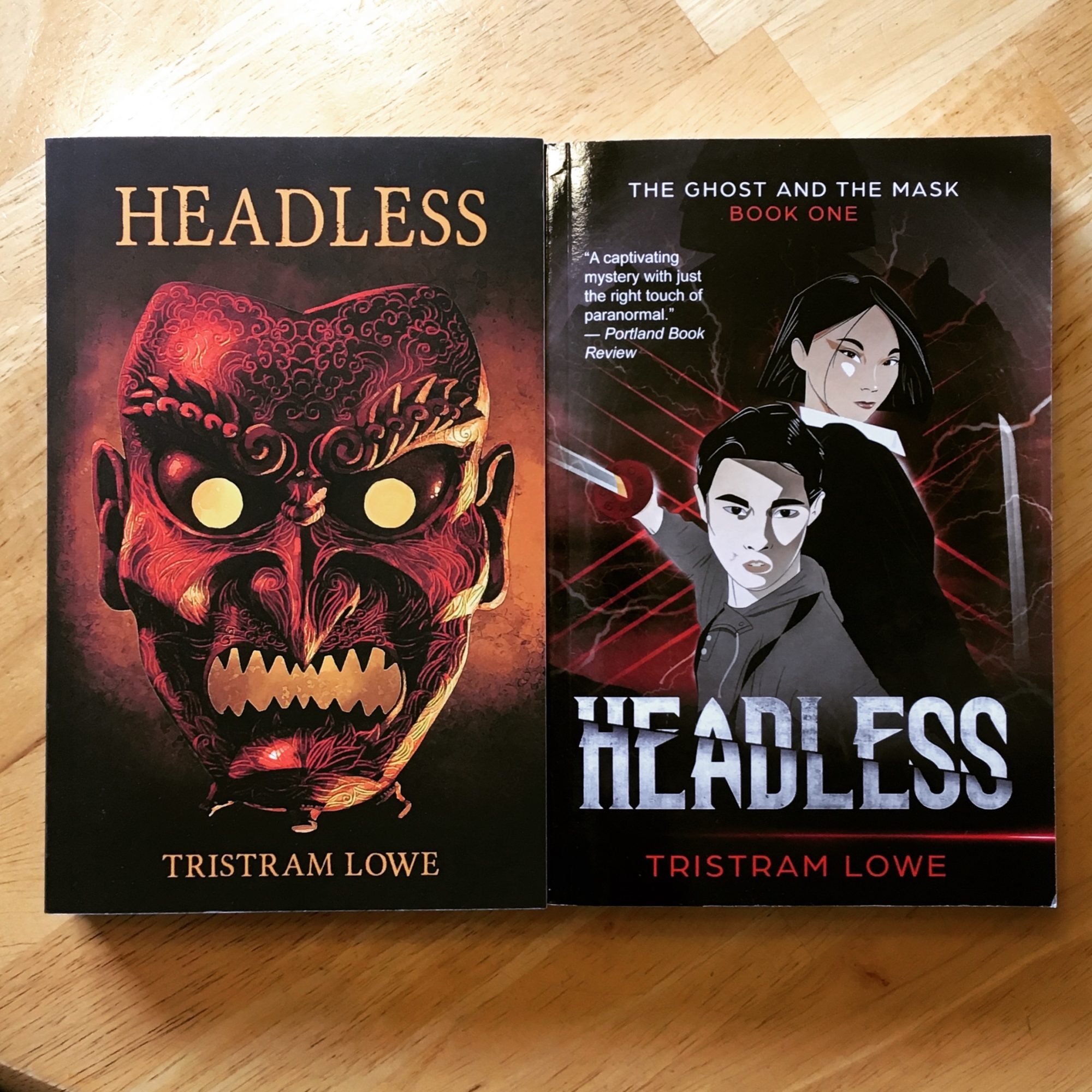 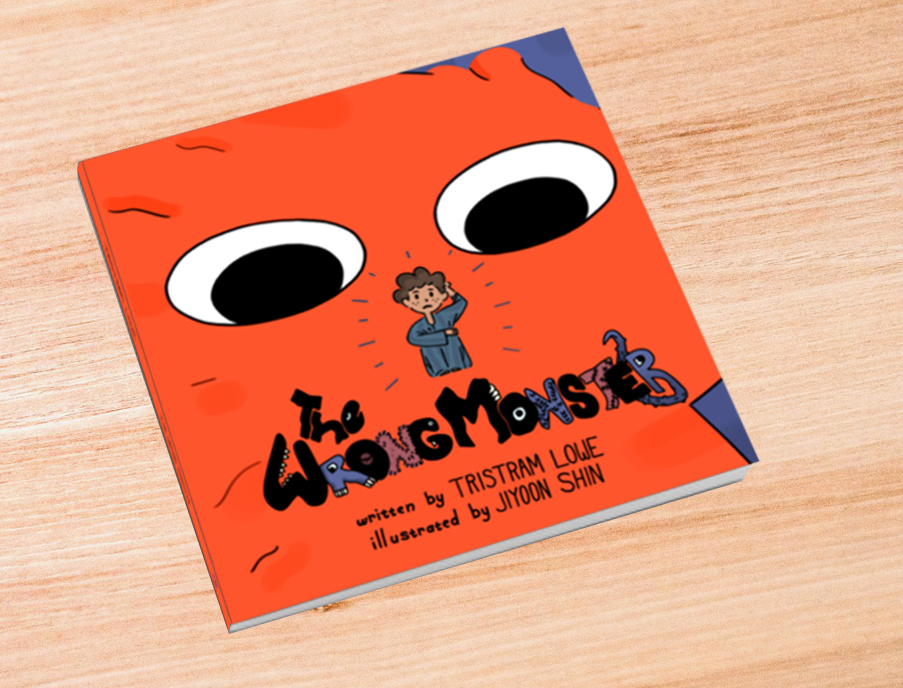