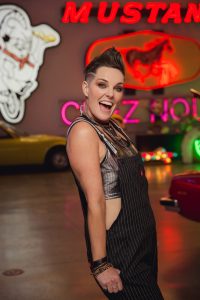 Today we’d like to introduce you to Bowie Jane.

So, before we jump into specific questions, why don’t you give us some details about you and your story.
I’m an Australian who has lived in Los Angeles for six years and I’m loving it!

I was living a very secret double life until my story was exposed by the Daily Mail in the UK which was crazy at the time – I was front page of every major paper in the UK and on every radio show. My double life is that I’m a criminal trial attorney having worked in money laundering and tax fraud but am also a professional DJ singer-songwriter! Basically, I would work as a lawyer during the day, then rip off my conservative clothes and get on stage at night. The lawyers didn’t know I was a singer and the musicians didn’t know I was a lawyer.

Once my story became public knowledge around the world, I quit the law and am now a full-time musician.

I’ve been performing since I was a kid and started out in musical theater and madrigal groups believe it or not! I think that’s where I first fell in love with harmonies. I then really wanted to be in a band so started doing acoustic duo work and then moved into the band arena, started songwriting and then releasing in the UK and touring. For so many years, I was gigging 5-7 gigs a week which I absolutely loved and gave me my performing chops. I love revving up a crowd!

Because I was releasing a heap of dance music and had top 10 charting songs in the UK, I started DJing my gigs with live vocals which has been awesome. I now do mostly strict DJ gigs and focus predominantly on house and tech house.

We’re always bombarded by how great it is to pursue your passion, etc – but we’ve spoken with enough people to know that it’s not always easy. Overall, would you say things have been easy for you?
The hardest part has been moving to another country and starting with no contacts. It’s like starting from scratch again even though you have had a huge amount of success in another country. Moving to another country means obtaining work visas (this is extremely difficult in the USA), finding a place to live (nearly impossible without a credit history), earning money, learning the city and then finding your music scene.

I wouldn’t change it for the world but it’s definitely a hard slog and very expensive but I’m really proud of how established I feel now in the USA and how grateful I am to have had these opportunities.

We’d love to hear more about your work and what you are currently focused on. What else should we know?
I’m a DJ who works predominantly in the house/tech house scene. I recently worked with the Toolroom Records Academy to enable me to produce on Ableton which has been amazing for the creative process. I work mostly with my awesome music producer and songwriting partner, Jason Bond. He has an incredible ear and amazing work ethic so it’s great to have him as a partner.

In quarantine, I started a radio show with my co-host, Jess Bowen, on LA-based radio station Idobi Radio (5 million listeners), called Babes Behind the Beats. We record a weekly radio show interviewing amazing females working in the music industry. It’s been fascinating to interview females both behind the scenes and on stage in relation to their journey getting them to where they are today. So far, we have had guests such as Cassadee Pope, Amanda Davis (Janelle Monae), Inaya Day (Mousse T), Esjay Jones (Krewella), Mandy (Misterwives), DJ Carly Wilford, Kiiara, Patty Anne Miller (Beyoncé), Eva Gardner (Pink), Chrissy Costanza, Tessa Violet, Tatiana de Maria, Mona Tavakoli (Jason Mraz), Vicky Hamilton (Guns n Roses) and a heap more!

Because we both haven’t had gigs due to COVID quarantine, it’s been so so fun and we can’t wait to continue this show for a long time.

In relation to my DJing, I absolutely can not wait to get back on stage. I was booked to perform at Dodgers Stadium in June but I am just not sure if the gig is going ahead…so we will wait and see! Otherwise, I can’t wait to see what pops up when things reopen.