Meet Brittani Graves of The Bite in South Bay 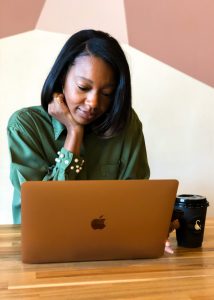 Today we’d like to introduce you to Brittani Graves.

Brittani, can you briefly walk us through your story – how you started and how you got to where you are today.
The idea for The Bite came in the summer of 2016 when a group of friends and I were feeling discouraged after the shooting of Philando Castile. We wanted to find a way to redirect the negative energy we were feeling into something productive and beneficial for the Black community.

In the three or so meetings we had, we discussed the importance of awareness and how not being properly informed about what’s happening to and around us impacts us in a very tangible way. This applies to knowing who we are voting for, understanding what policies are on the brink of passage, and even what issues are brewing in our communities that we should take a stand for.

There were a few potential barriers that we saw as to why Black millennials might not be as politically engaged as we’d like them to be: (1) they didn’t have time, (2) the news wasn’t communicated in a culturally relevant way, and (3) sometimes it was just too confusing.

As a collective, we all agreed that we were on to something, but that was where the discussions ended. The remnants of those conversations nagged me for years thereafter. I often toyed with the idea of starting something but would get discouraged after sharing my thoughts with others who didn’t see the potential or the need.

It wasn’t until I quit my job in New York and moved back to LA that I finally built up the courage to believe in the possibility myself and start small. With my first few emails, I was literally only writing to 2-3 friends.

Overall, has it been relatively smooth? If not, what were some of the struggles along the way?
The biggest struggle I’ve had thus far has been my own hesitation. Each time I’ve decided to step out on faith, though, I’ve opened myself up to tremendous growth.

Whenever I feel nervous to take a particular move, I often talk to those closest to me and I also have a conversation with myself. If I feel like taking an action would lead to progress, I do it scared. This has worked for me time and again with The Bite.

Alright – so let’s talk business. Tell us about The Bite – what should we know?
The Bite is a weekly email digest for Black millennials and Gen Z’ers. It delivers the previous week’s news in US politics, social justice, and Black culture in 5 minutes or less. Its tone is playful, sarcastic, and culturally relevant. The format is brief and digestible. It is not meant to be an authority on any topic and because of that, it aggregates news from around the web. I am learning about what’s happening in the world as my audience does the same, so in a way, it’s the output of the news that I ingest week in and week out.

I am most proud of delivering something that is useful and fulfilling to my target audience. If someone tells me that they learned something new or was finally able to grasp something that had previously gone over their head, I know I’m doing my job.

What sets The Bite apart is its focus on breaking down the political sphere for the Black community. It is not the only newsletter that talks politics, but very few speak directly to Black people in our unique language and tone. It is also not the only Black media brand, but many of those report more on social or cultural issues. The Bite hits a sweet spot.

Any shoutouts? Who else deserves credit in this story – who has played a meaningful role?
I constantly give credit to the original group of 4 or 5 friends who accepted the invite to my apartment and opened up at a time in which we all felt powerless. Our honesty about what our community needed and how we can be of service to the people we represent was truly the seed.

I wouldn’t have been able to get this far without my family and friends. Each and every one of them has listened to my ideas, connected me with a new resource, or simply told me to keep pushing.

I also give credit to the job that I quit in 2018. I really struggled with working in an industry that I personally felt had no positive impact on everyday people. Had I stayed, I wouldn’t have taken the time to think about what I wanted and The Bite would still just be an idea.

Lastly, I thank my hometown of Compton and South Central Los Angeles as a whole. I made the decision to finally pursue this idea while sitting in the bedroom I grew up in and a big part of my motivation is the possibility of providing a tool that can educate and empower the communities of color that raised me.