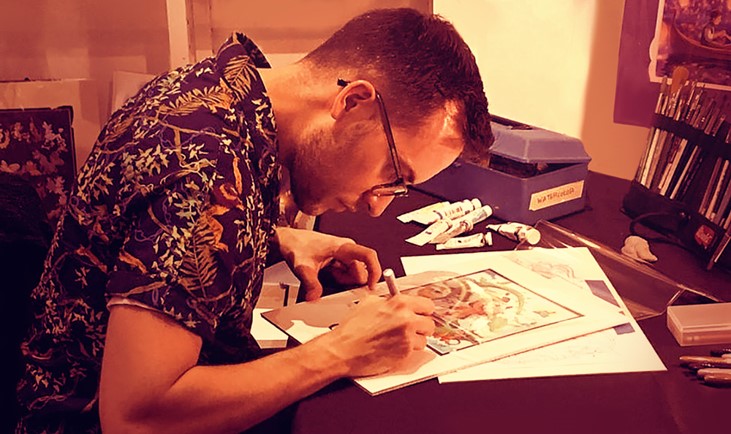 Today we’d like to introduce you to Bill Robinson.

So, before we jump into specific questions about the business, why don’t you give us some details about you and your story.
I grew up in rural western Massachusetts – and when I say rural, I mean my high school was in the middle of a cornfield, a graveyard, and a turkey farm. It was the kind of place where a kid could wander and have time to be bored. The ’90s have this magical charm about them when I look back; it was a time where technology came just far enough that my friends and I had a video camera to play with, but no way to upload embarrassing footage to YouTube or Instagram.

When I wasn’t making movies or animations as a child, I was putting on magic shows and epic hour-long marionette performances in middle school. My interests eventually led me to film school at Rochester Institute of Technology. I studied CG animation and developed a love for concept art, character design, and illustration. They have this wonderful curriculum that allows their students to really try a little bit of everything. I shot (and cut!) 16mm film by hand, edited on old VHS decks, and animated in 2D, stop motion, and CG.

We had to produce an entire film (live action or animated) every year, often more than one film. I wish I could go back and tell myself how lucky I was to have that time to myself to create whatever I wanted. Unfortunately, some faculty had a real disdain for LA and didn’t make it sound like a good option for a lot of us. After school, I ended up in San Francisco, where I toiled in the mines of social/mobile gaming for years.

I learned a lot in those years, and took advantage of every opportunity to take classes, network, and glean what I could from some very talented coworkers. I started freelancing as a children’s book illustrator, which I fell in love with. I’ve now illustrated over fifteen stories for kids, including books for Disney, Dreamworks, Henson, and Random House.

After close to 10 years in the Bay, my wife and I finally made the move to Los Angeles and have never been happier. Here in LA, I’ve had the chance to jump into the animation industry, working as a designer at ReelFX, Sony, Disney Jr, and my current position at Dreamworks TV. I continue to freelance in the kidlit world, as well as do illustration for the WonderGround Gallery in Disneyland.

Overall, has it been relatively smooth? If not, what were some of the struggles along the way?
I knew from a young age that I wanted art to be at the center of whatever career I pursued. When I was a kid it was really hard to figure out what exactly that career would be – growing up outside of Southern CA I had no connection to the film industry, or idea how people got started in it. I didn’t hear about CalArts (the most famous animation school in the world) until I was halfway through college!

These days kids can reach out to their art heroes on Twitter or IG and hear back in a matter of minutes, getting answers to all sorts of questions they have about a career or a portfolio or other advice. I was very lucky to have extremely supportive parents, who were willing to send me to art school and who believed in me no matter what.

As I was just getting started out of school, I hit a major roadblock when I was diagnosed with Crohn’s disease in 2009. Crohn’s is an inflammatory bowel disorder (it’s as bad as it sounds) that involves fatigue, nausea, diarrhea, and can quickly spiral into complications involving serious surgery and insanely expensive drugs delivered on a chemo ward. You really don’t appreciate your health until it’s gone. It was a wakeup call in terms of my diet and stress levels.

Every artist I know is a workaholic, and there is a deep sense of guilt when we are not working. We all have to remember to take time to simply enjoy life – get out in the world while you still can, talk to your friends, enjoy a good meal, see a movie. These things may seem simple, but they keep us sane. I am happy to say that with some major modifications to my diet and lifestyle I am in remission ten years later and doing well.

The other thing that a lot of artists (myself included) seem to struggle with is comparing yourself to others. I’m sure this can’t be limited to artists, but social media has changed the way we see ourselves in the world. It used to be that someone could be “the best” at something in their group of 100 people that they actively knew in their life, and that was just great.

Now, we no longer compare ourselves to our little group of 100 friends, we look to the entire world – to thousands and thousands of incredibly talented folks that are pumping Instagram full of masterpieces every minute. It’s easy to feel overwhelmed and inadequate when you are bombarding yourself with that kind of content all day, every day. Stop following all artists and go look at some puppies and cooking videos. You’ll feel better, I promise.

Flimflammery – what should we know? What do you guys do best? What sets you apart from the competition?
I started Flimflammery in 2009 when I really got into the art/comic convention scene.

I also self-publish some of my own children’s book work, as well as work with larger publishers. I like to explore childhood memories, often combining an idyllic scene with a slightly darker vibe that seems to be lurking just below the surface. I feel like so much of childhood is filled with fun and fear, and that rollercoaster of emotion is what I remember most about being a kid.

There are so many groups and events and shows happening every week that it can be hard to keep up with! I enjoy taking part in group shows when I can, often with Gallery Nucleus in Alhambra. I love that there is a real community of artists here, and many of them are absolute legends that might just happen to live in your area.

I’m a huge Disneyland nerd and recently found out I live down the street from multiple Imagineers – we didn’t have that where I grew up by the cornfield and the graveyard.

People complain about the usual LA problems – the traffic, the sprawl, the unbearable summer heatwaves. For me, the hardest part has been dealing with FOMO (Fear of Missing Out). I have a 1.5-year-old daughter, and my life has gone through a lot of changes recently.

I feel like in a lot of other places I could focus more on just being a dad, but out here there is still a lot of pressure to network, be present, and participate in the community. It’s a good problem to have. 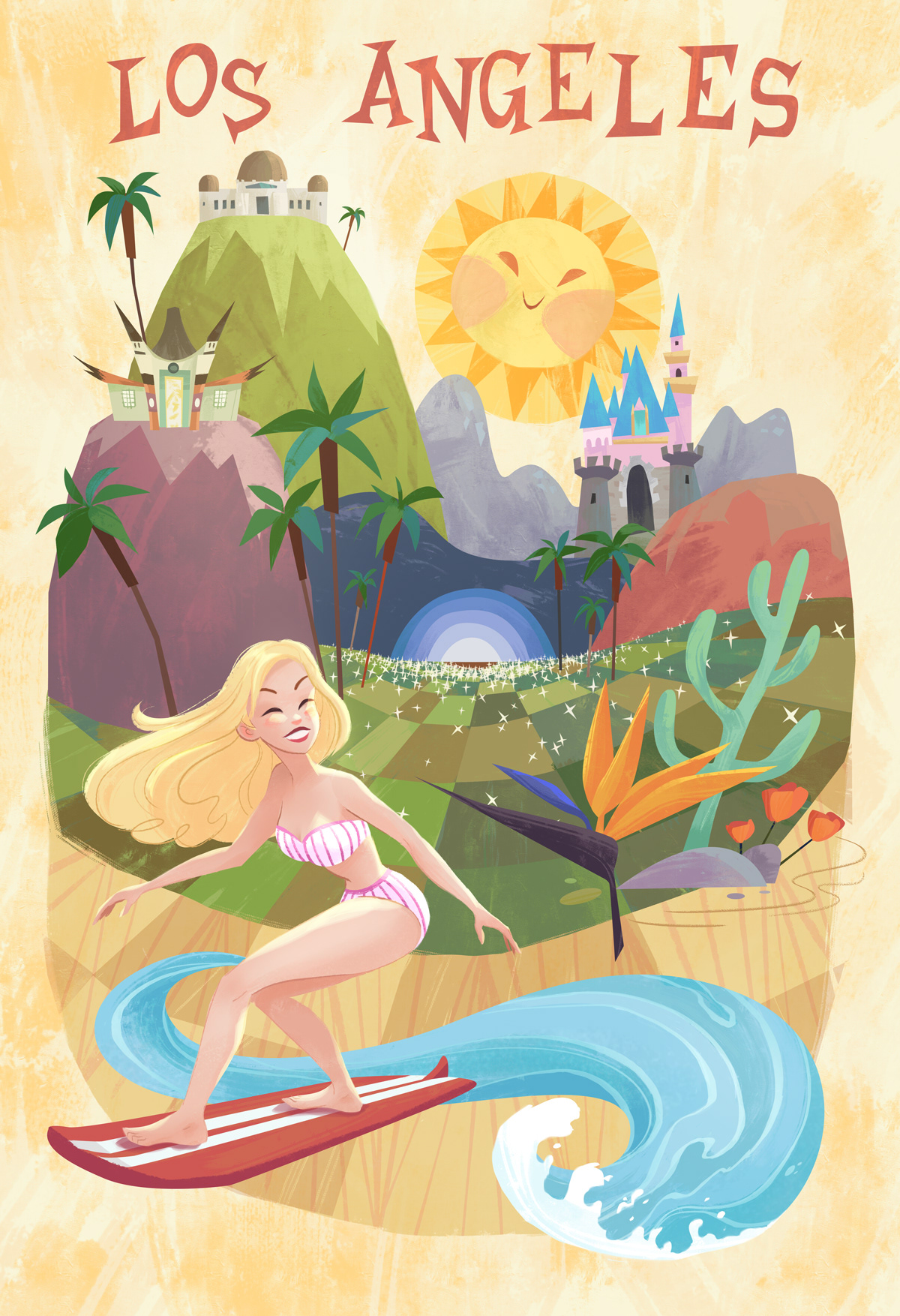 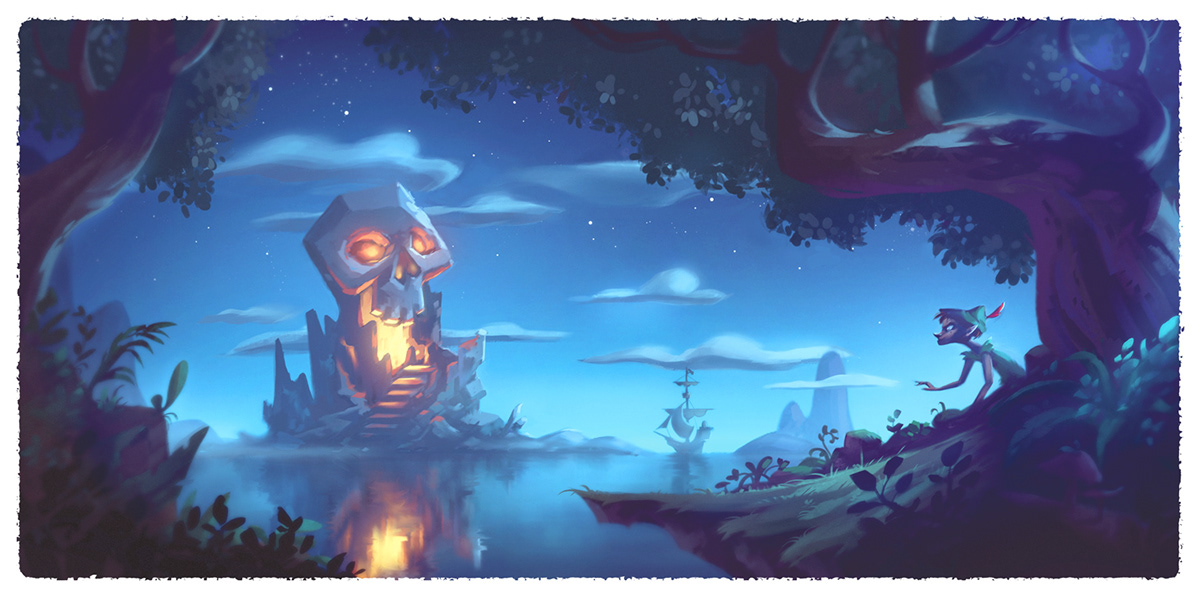 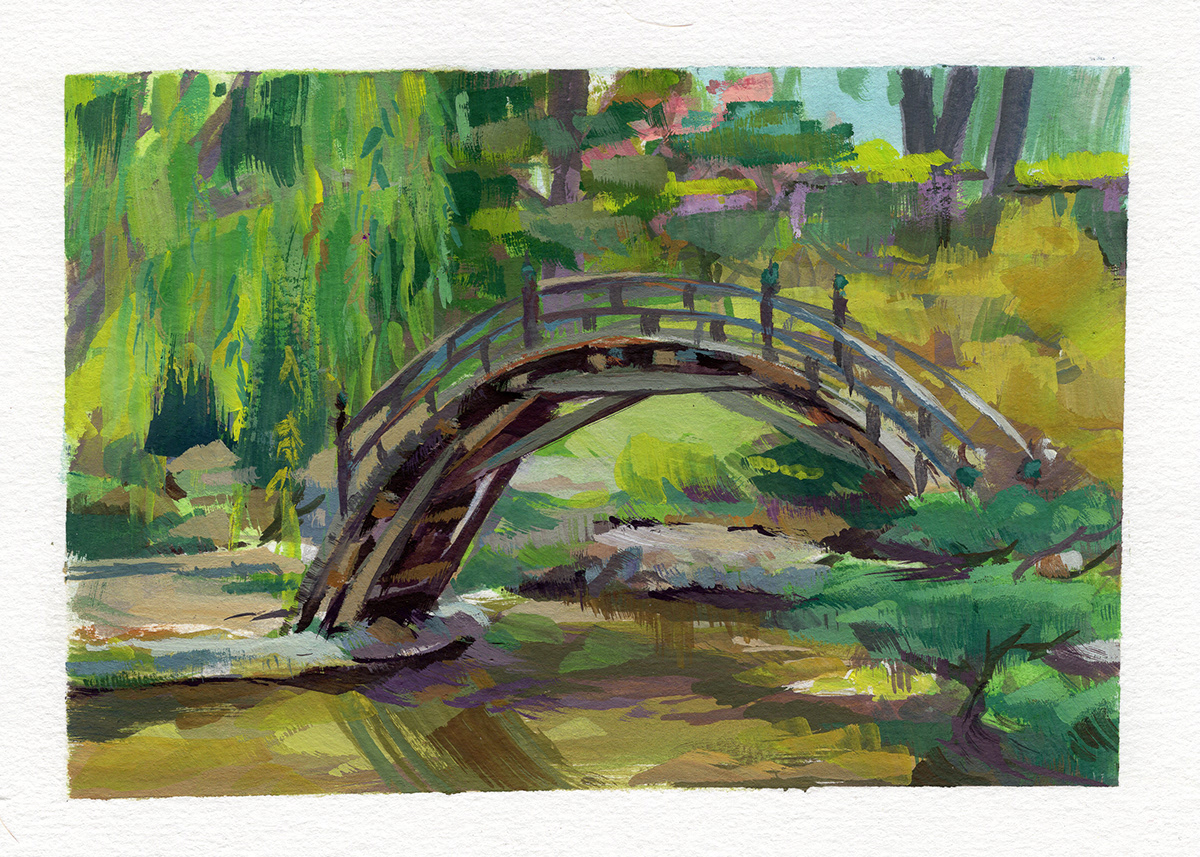 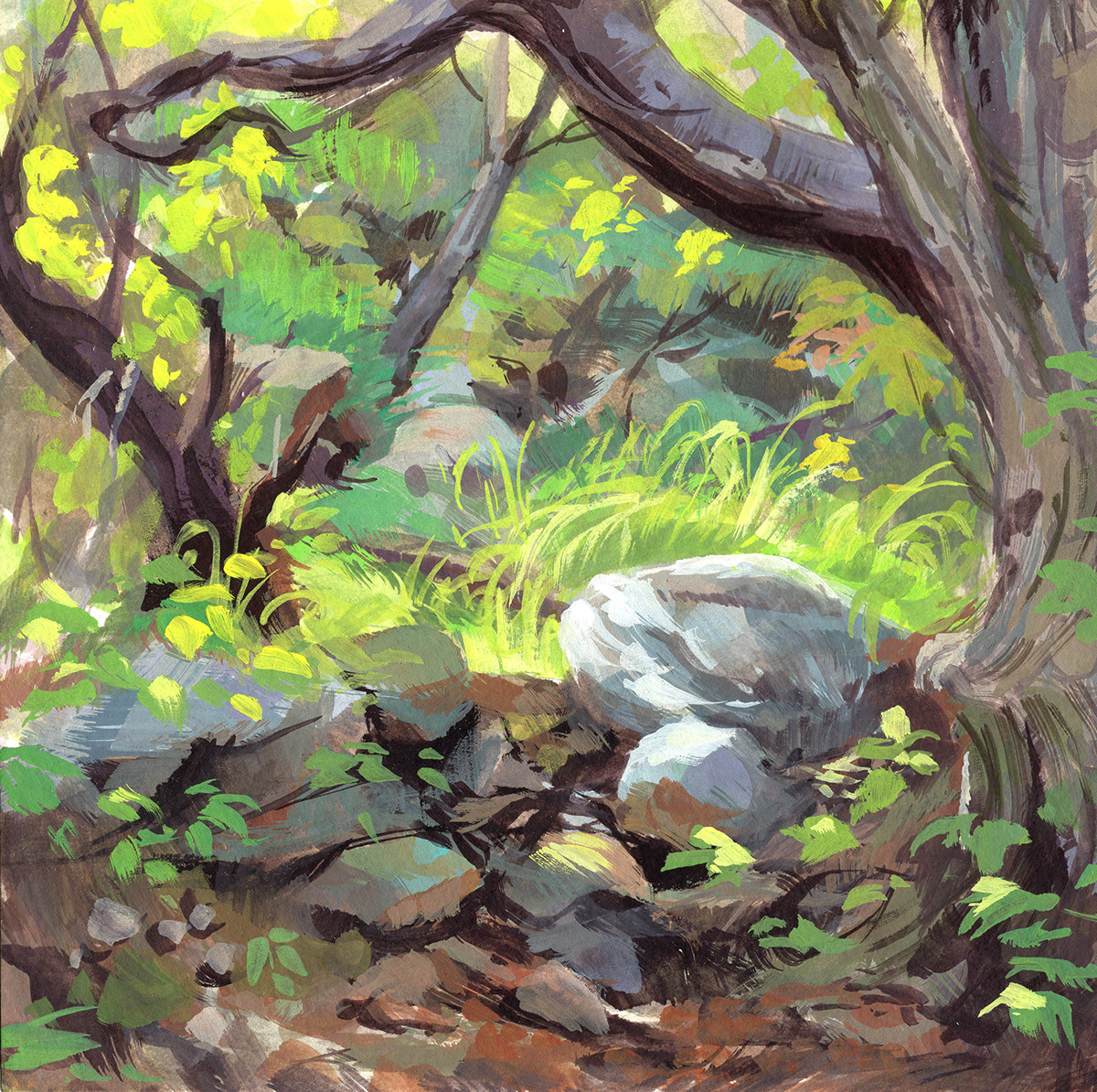 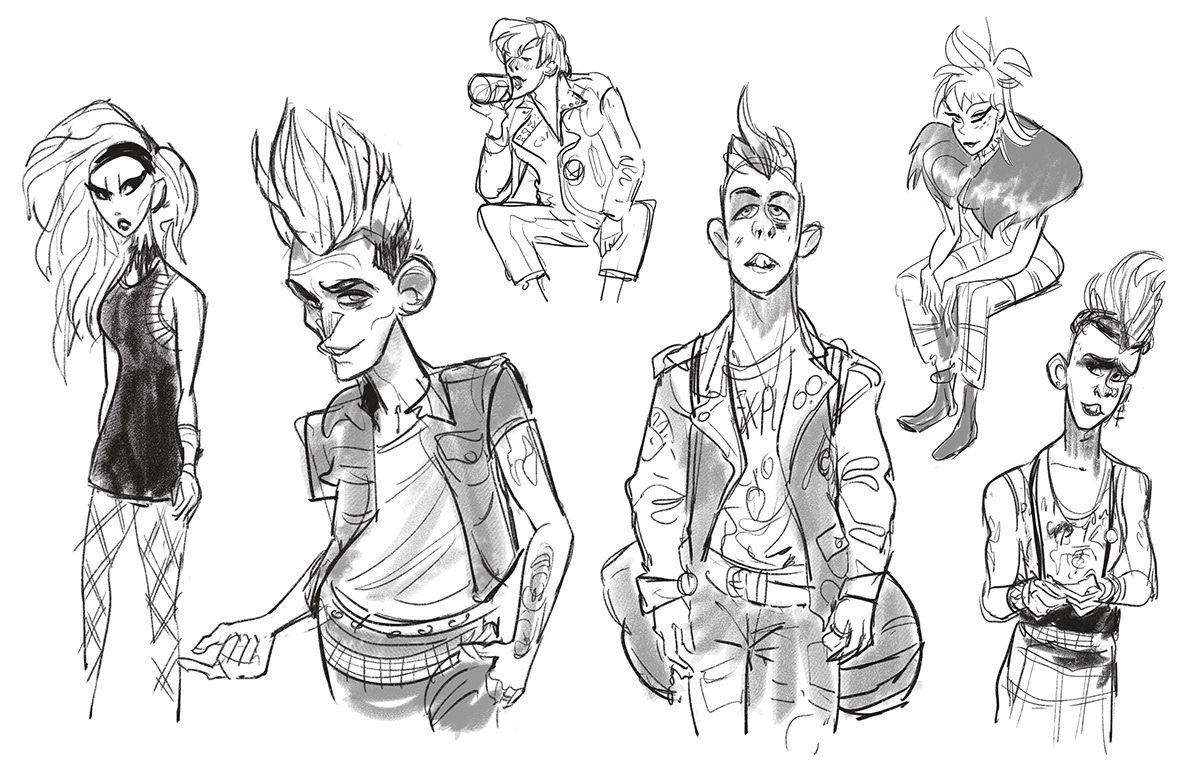