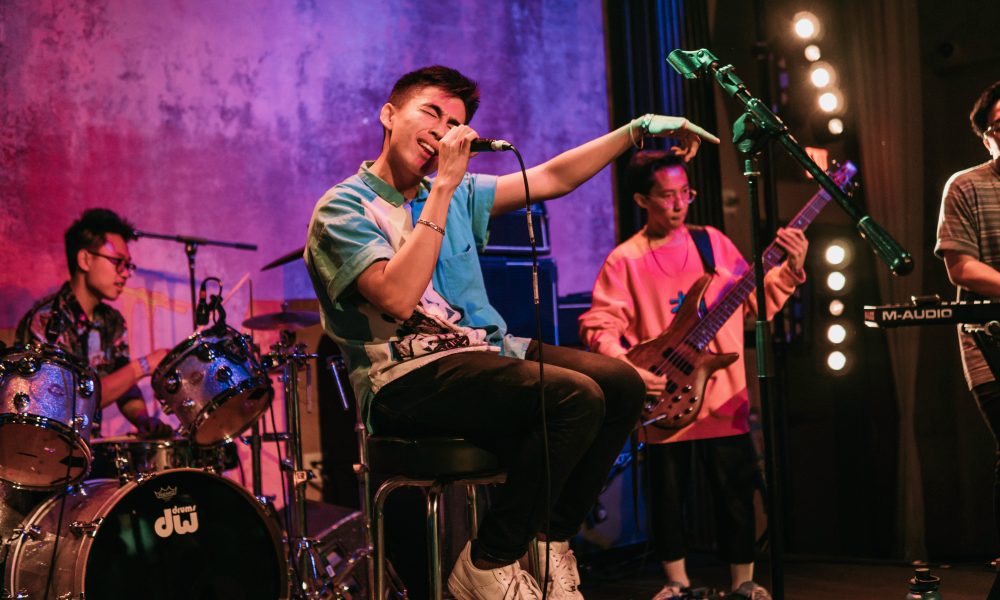 Today we’d like to introduce you to Benzer Joey Uy.

Benzer Joey, can you briefly walk us through your story – how you started and how you got to where you are today.
I am a music artist from Rowland Heights, CA and I am the son of Filipino immigrants. My love for music really spans back to them, listening to classic Filipino singers such as Rey Valera, Basil Valdez, VST & Company and much more on a Saturday morning cleaning and doing chores around the house. Growing up, my dad still had all his physical CDs and would play them on car rides wherever we went. I’ve always been exposed to music from a young age whether it be singing in church choir, doing karaoke at your typical Filipino party, or performing in show choir in high school. It was also during the end of high school where I started expanding my music taste as I was really into “oldies” that really shaped the American sound from the 1950s onward. African American artists such as The Platters, The Temptations, Michael Jackson, Stevie Wonder, and A Tribe Called Quest really inspired me to understand music and how they put their soul into their music was what really made me love them and music just in general. As I expanded my taste for more modern music, I found influences in artists such as Mac Ayres, Devin Morrison, Anderson .Paak and Frank Ocean to name a few. There was just something about their music that drove me to want to create music for myself.

It was around my second year of college where I got an iPad and learned to produce using my first DAW, being GarageBand on iOS. Some friends and I got together and would just create tracks to rap and write to and even performed one of the songs at a little event on campus. But those fun times spawned something deep. Listening to music made me feel something and evoked certain types of emotion when listening to a particular genre. I believe that God gave us music to express ourselves where sometimes words alone could not. I wanted to emulate that certain feeling when creating and listening to even my own music so that outside listeners could genuinely feel and understand me as well.

Presently, I have released an EP titled ONE and a few singles under my belt with the help of other talented musicians as well as one of my good friends, Eric Reyes who has helped mix and produce my records. I currently am working on my art page titled ARTFORM626 in which I highlight artists from the 626 area regardless of their art medium because of how much hidden talent there is in my area. Lastly, I am finishing up my second EP titled Deuce which is set to release September 18, 2020 so stay tuned!

Great, so let’s dig a little deeper into the story – has it been an easy path overall and if not, what were the challenges you’ve had to overcome?
To be completely honest with you, I can’t really say that I’ve had crazy hardships in my life. My music journey has been smooth so far, hardest thing maybe being I didn’t get the amount of listens I wanted in a certain month (which is NOTHING compared to the big picture of life). I did not have to struggle to pay rent, didn’t have to sleep on a friend’s couch, and didn’t have to work tirelessly just so I could eat. To those stories of other artists and regular people I have read that mirror said circumstances, I highly commend their drive and work ethic to pursue their passion. It is inspiring to see people grind and create a living sharing their music and to not forget their roots. I’ve been blessed with what God has given me with loving and supportive parents and friends that genuinely support my work. Most struggles are mostly in my mind, things that are transient and will come to pass. Whether it be getting heartbroken, thinking my music isn’t good enough, anxiety about the future, or maybe not getting the job I want, I still appreciate this life and want to create music that people can relate and vibe to. I hope to one day help people on a bigger scale whether it be through a foundation or charity to help those who struggle with depression and anxiety.

Can you give our readers some background on your music?
In terms of sound, as I said, I draw a lot of influence from soul, R&B, funk, sometimes even pop. I think what sets my sound apart is that I really like to blend 90s Hip Hop with smooth R&B (whether it be modern or classic). I love the way how drum kits have those piercing hits on the hi-hats and the pops on the snares in hip hop, definitely attribute my ear for that with A Tribe Called Quest records. I also like putting my friends on my records. I love how Mac Ayres includes his friends on all his projects and gives credit to where its due and that’s something I take inspiration from. As someone who is an independent artist, no one really is truly “independent” except for a select few wherein they market themselves, they create their own videos, create their own artwork, photography, licensing, mix, master their own work, and the list goes on. TEAMWORK MAKES THE DREAM WORK. I am blessed to be in the city where I am and have such talented people who surround me and are amazing at what they do.

What moment in your career do you look back most fondly on?
The proudest moment of my career has to be a show that I played which was at the House of Blues Anaheim in the Parish Room. It was the first show that I ever played my own music, and in front of a crowd as well. It definitely was not a new experience, as I was in show choir in high school. This performance also was not my best to be quite honest. Sound levels of the instruments were a bit too loud in contrast to my voice as told by many of my friends in the audience. Also, the computer that my friend was using for his midi controller would not work for 10 minutes but we finally got it to work and it sounded great. All in all, even with all the obstacles involved, this was a good step for me to just experience what it was like on stage performing my own original work alongside my friends who helped accompany me with drums, guitar, piano, and bass. It was also an eye-opener to see all the people who came to support my music and my friends on stage with me. This pushed me to create more and reach for the stars in the music industry as there is much opportunity just being where we are geographically and just having all the resources I have around me in my friends. 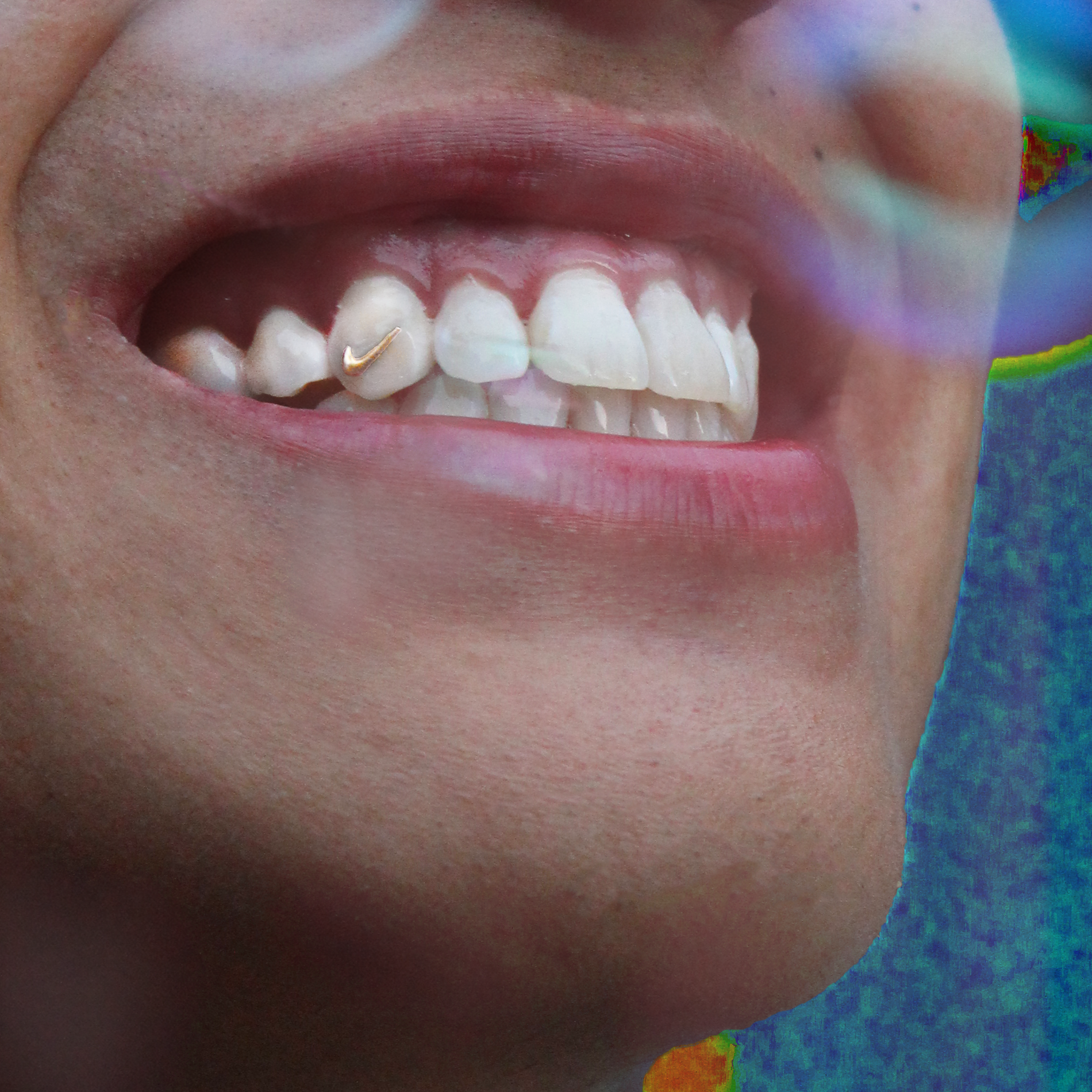 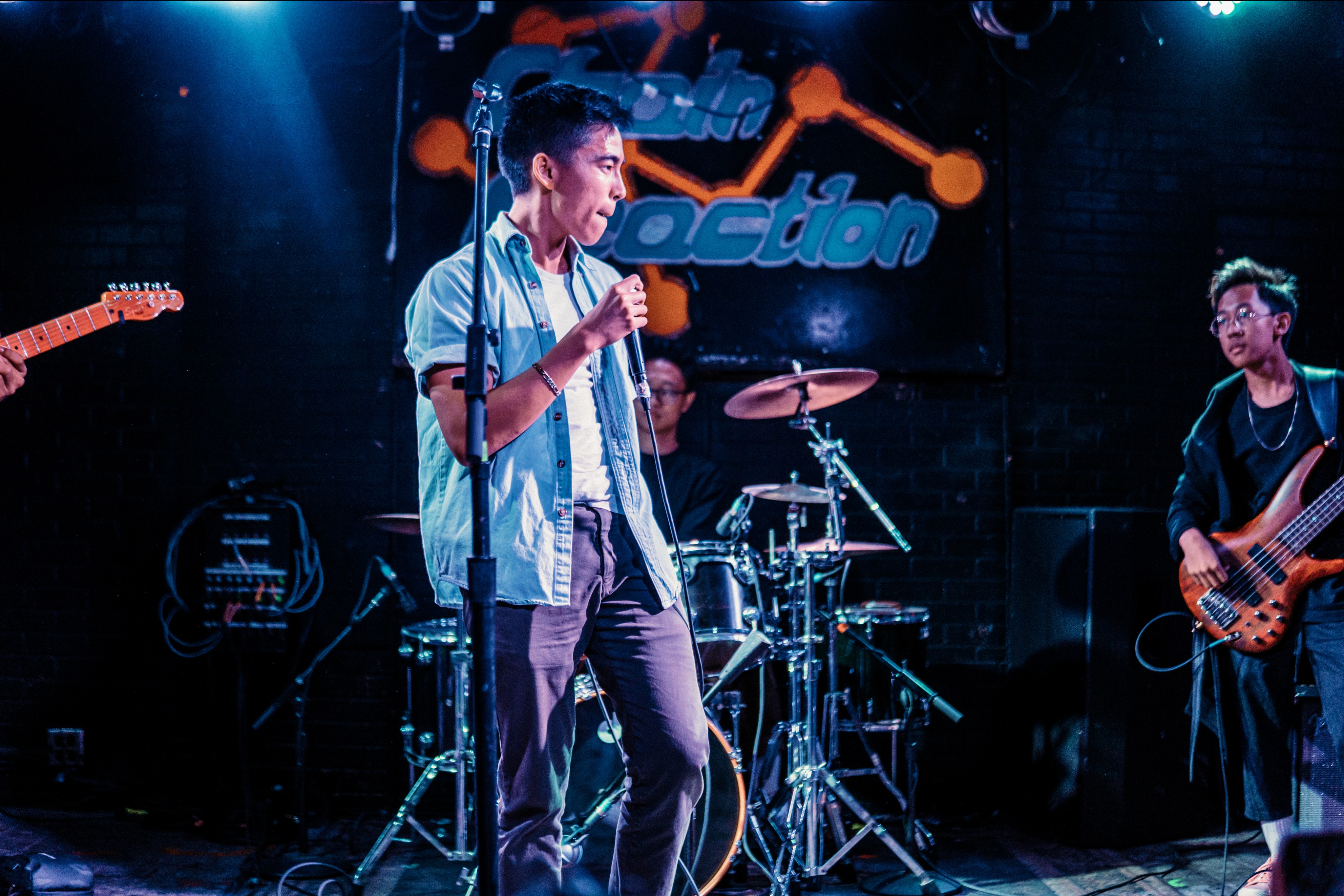 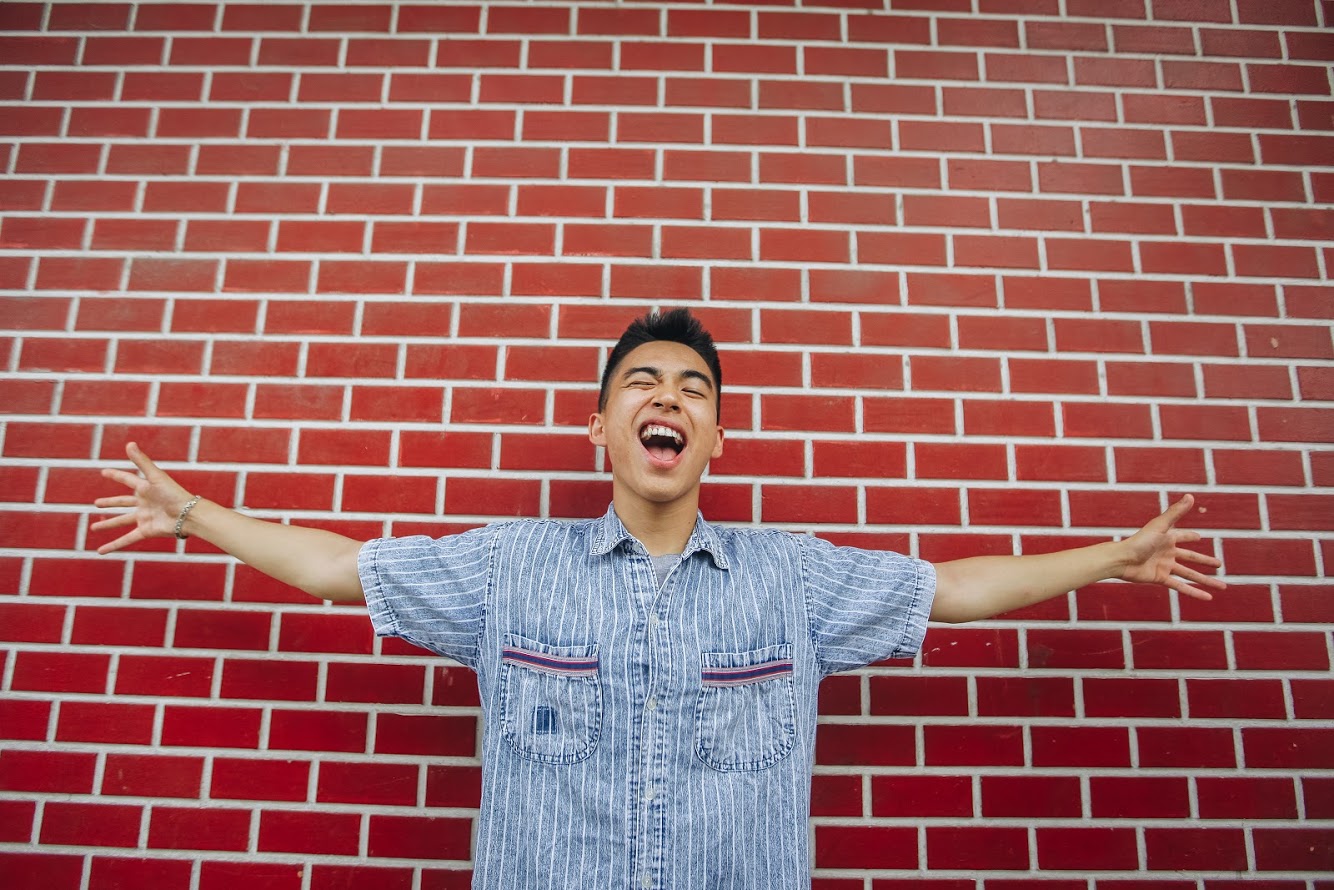 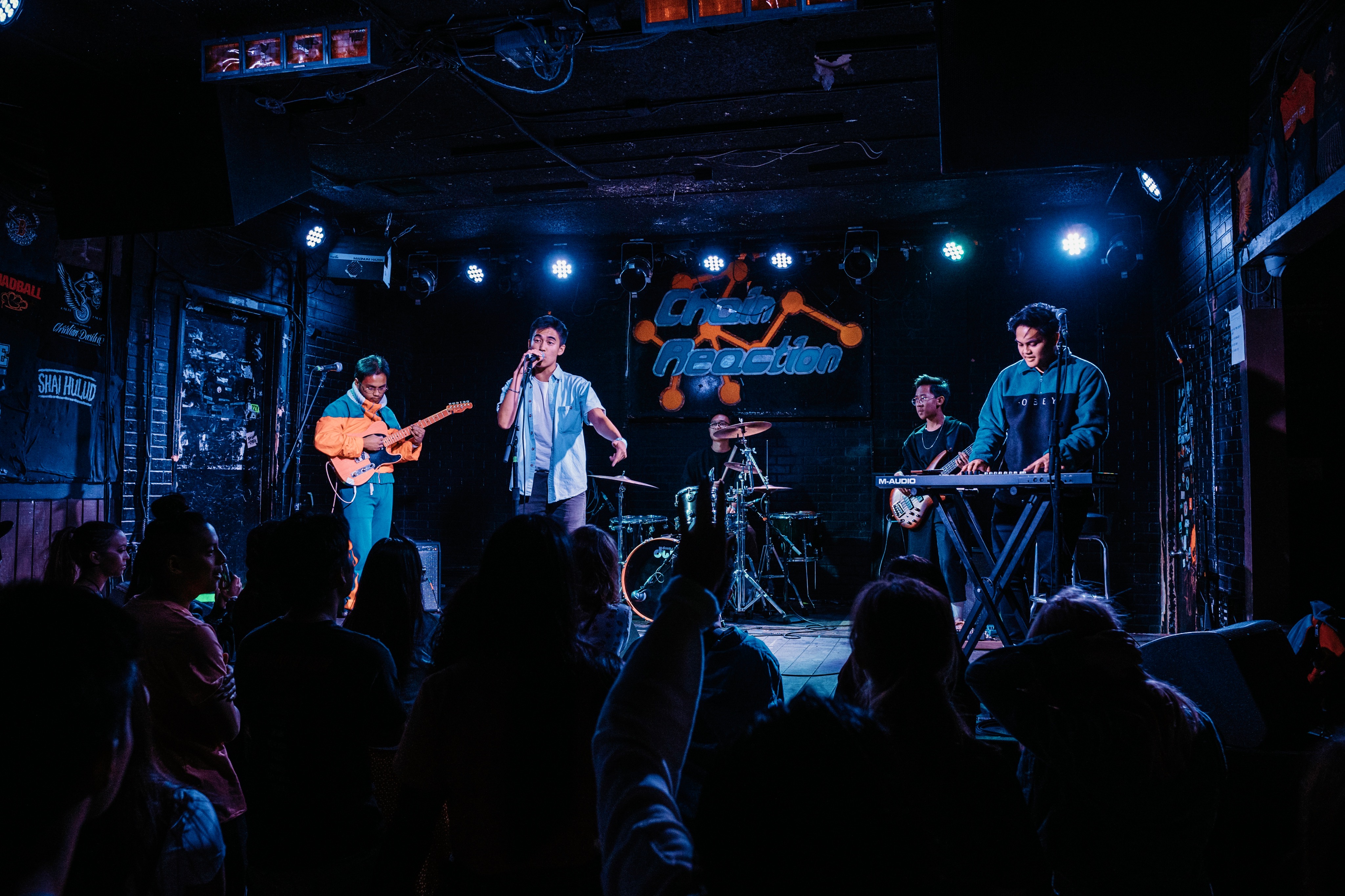 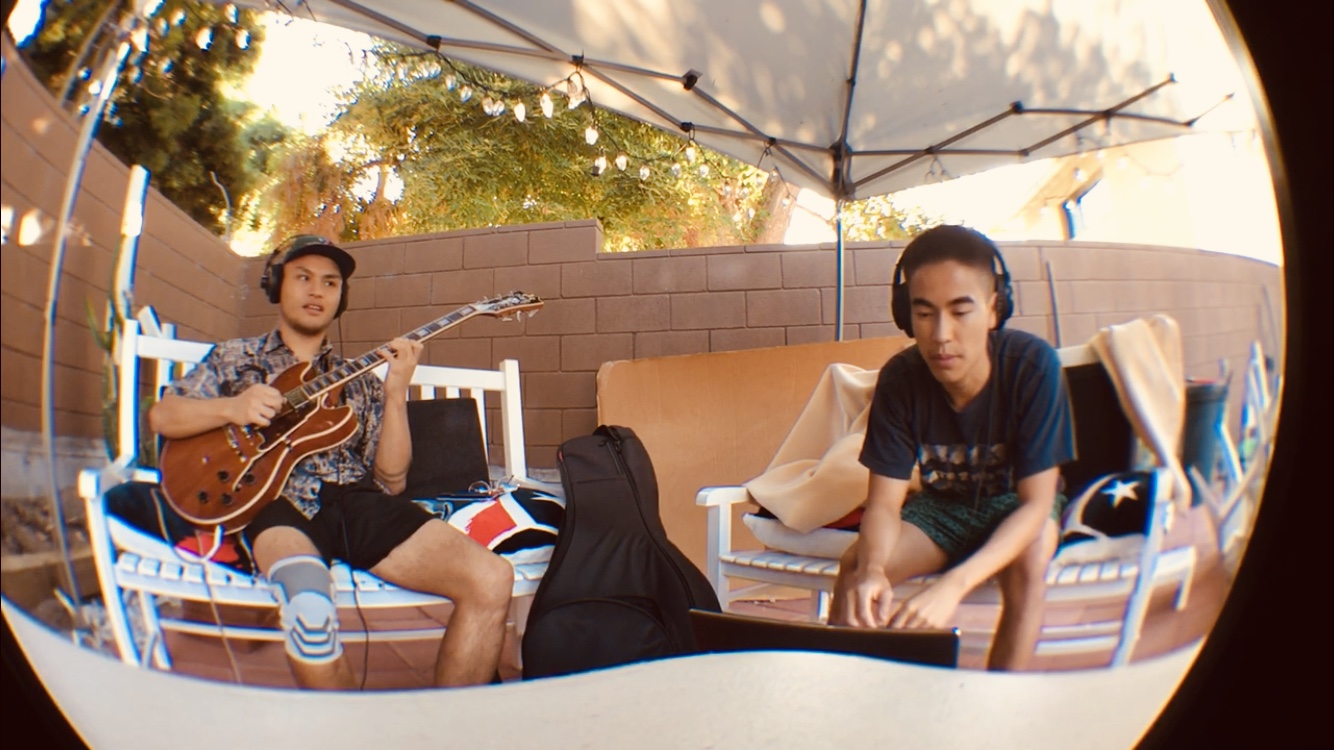