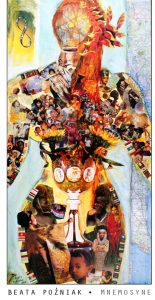 Today we’d like to introduce you to Beata Poźniak.

Beata, please share your story with us. How did you get to where you are today?
As a voiceover actress you can hear me as the voice of Skarlet, a badass in the newly released video game “Mortal Kombat 11”. On screen you might remember me from playing Gary Oldman’s wife, Marina Oswald in Oliver Stone’s Oscar-nominated film “JFK” and then possibly from playing the first female President of the World in the SCI-FI series “Babylon 5.” I really cherish that role, since it was and still is such a rare opportunity, not only in the real world to be a female President of a country, but also on screen for an (immigrant) actress to be a female leader, a badass woman like that. I also love comedy and can be funny!

My natural accent does it for me. No acting, 🙂 lol. I was on “Mad About You” playing Helen Hunt’s and Paul Reiser’s maid who happens to be an artist too. Not many people know that in real life I paint too. I love that the producers and writers had fun with the storyline and retitled the episode as “Maid About You.” Another fascinating badass character was based on true facts during the 1917 Russian Revolution, Irene, a revolutionary overthrowing the Russian government in George Lucas’s “Young Indiana Jones: Russian Revolution 1917.”

We shot this project in Prague, one of the most beautiful cities in the world. Playing a double agent working for the CIA and Mossad on the hit Paramount TV series “JAG” was a little unnerving since I come from Poland, a country that had Soviet-induced international isolation. On “Melrose Place” I played Dr. Katya Fielding a single mom marrying a gay character, who becomes a father to my child.

I have also narrated documentaries such as, “The Officer’s Wife” about the mass murder of Polish officers in the Katyń Forrest and co-narrated with Michael York and John Savage “Freedom from Despair,” a film about communism, which unexpectedly won several Awards and received an honorable mention in the US Congress. People who have seen this film or lived under that system like me might learn or get a deeper look what our life during those times have looked like.

We’re always bombarded by how great it is to pursue your passion, etc. – but we’ve spoken with enough people to know that it’s not always easy. Overall, would you say things have been easy for you?
I was the only child, and at age two my father escaped the country, suddenly nowhere to be found. Since we were abandoned, overnight my Mother had to figure out how to get a job, feed me, pay all the bills herself and then try to educate me. These were very hard times for us. I do remember living on food rations and from time to time eating meals made by kind neighbors.

At age 25, I got to the United States. Although already as an adult with a Masters Degree in Arts and Film I had to start from zero again. Learn the language. Make new friends, which was challenging since I didn’t go to school in the US. I was just one of over a million immigrants that come here annually – that had to suddenly find a new way of living, find a new identity. It is very different when you transplant a young, “baby” tree or a mature, grown-up tree (like me) to new soil. I was eager to learn, had different jobs, not knowing what will happen tomorrow.

People around me kept telling me that I was driven and willing to work overtime and also take jobs that no one else would want. My breakthrough? One day I received an unexpected email from a well-known publisher, Random House. They asked if I’d be interested in narrating one of their new titles, which was the history of Catherine the Great. I was in disbelief… to narrate an audiobook in English?! This never happens. An immigrant, a non-native English actor reading an audiobook in English? Never.

When reading the email, I thought a friend was playing a joke. I called the number in the email and spoke to the producer. She said that instead of having a native-English speaker read a Russian story, pretending to do an Eastern-European accent, she wanted to have “the real deal.” She was after the authenticity. And that is how my first English audiobook “The Winter Palace: A Novel of Catherine the Great” was born. It was a 19-hour audiobook, in which I proudly made use of my European background and brought to life the 78 characters and their colorful accents.

These included the imperious German, Catherine, the clever and charming Polish maid, Barbara, and the devious Russian foreign minister, Betzhuvev, or the proper British ambassador, Sir Charles. After embodying one of the most intriguing women in history, I was asked to do the follow-up and read another 19-hour story, “Empress of the Night: A Novel of Catherine the Great.”

Then I was offered to read and play Dr. Shetyngard in a teen romance/adventure/sci-fi thriller, “The Illuminae Files,” by Amie Kaufman and Jay Kristoff. This was the biggest production that Random House had ever taken on. It took six months and over twenty actors. It was so beautifully done that it won AUDIE Award (an Oscar for audiobooks). I realized I entered a world I never would have dreamed of, if it hadn’t been for the Random House producer with a unique vision, that was committed to doing things differently. After that, I co-narrated “The Tsar of Love and Techno” by Anthony Maara.

This was selected as one of the Top Five Best Audiobooks of the Year by The Washington Post. I could have never, even in my wildest dreams, imagined all of that. I will be forever grateful to people that took a chance on me, and for discovering something that I didn’t even know I was capable of. The publisher really transformed my life, showing me that something seemingly impossible could become a reality. The producer paved the way for many other producers and publishers to be open and inclusive.

So, as you know, we’re impressed with Discordia Global Media – tell our readers more, for example, what you’re most proud of and what sets you apart from others.
The most proud thing I have done is to have met and found women that are inspirational — giving voice to the immigrants, who came here for a safer life. In searching for my new self, for my new identity, I wanted to find other immigrants, women from different walks of life that could serve as a positive role model. I met so many extraordinary immigrant women, from Ghana to Japan that words can’t even describe how uplifting their stories were. Therefore, in 1994, I spearheaded the introduction of the first bill in the history of the U.S. Congress (H.J. Res. 316) to recognize International Women’s Day in the United States. I wanted to celebrate the diversity of this great country.

It was humbling to receive an official recognition from the Los Angeles City Council, the Mayor of Los Angeles and Congress who commended for my efforts and vision in creating International Women’s Day. But what meant most to me was that my Mom burst into tears when I sent her copies of those letters. She was so moved and happy, she observed that her sacrifice and efforts as a single Mom injecting hope into both of us worked out, especially given the fact that often people expected that I’d be given to an orphanage.

To commemorate the introduction of the first bill, I painted “Mnemosyne – International Women’s Day” – an art piece that celebrates and depicts a community of all races of the world in a female form. It evokes the achievements of women along with their struggle for peace and equality in the face of discrimination and war. https://www.amazon.com/March-International-Womens-Day-Print/dp/B00KVVCJAM

So, what’s next? Any big plans?
Performing Sona Van’s extraordinary work at the GRAMMY Museum LA LIVE. “Libretto for the Desert” – poetry dedicated to the victims of genocide and war. Her work was translated into more than twenty languages . The author’s parents and grandparents were driven into exile due to the Armenian Genocide. I am so deeply honored to be able to share this emotional and unforgettable piece of writing. An audiobook “Libretto for the Desert” narrated by me was just released by Skyboat Media and Blackstone Publishing. https://www.amazon.com/Libretto-Desert-Sona-Van/dp/1982665394/ref=sr_1_1?qid=1556986052&refinements=p_27%3ASona+Van&s=books&sr=1-1&text=Sona+Van 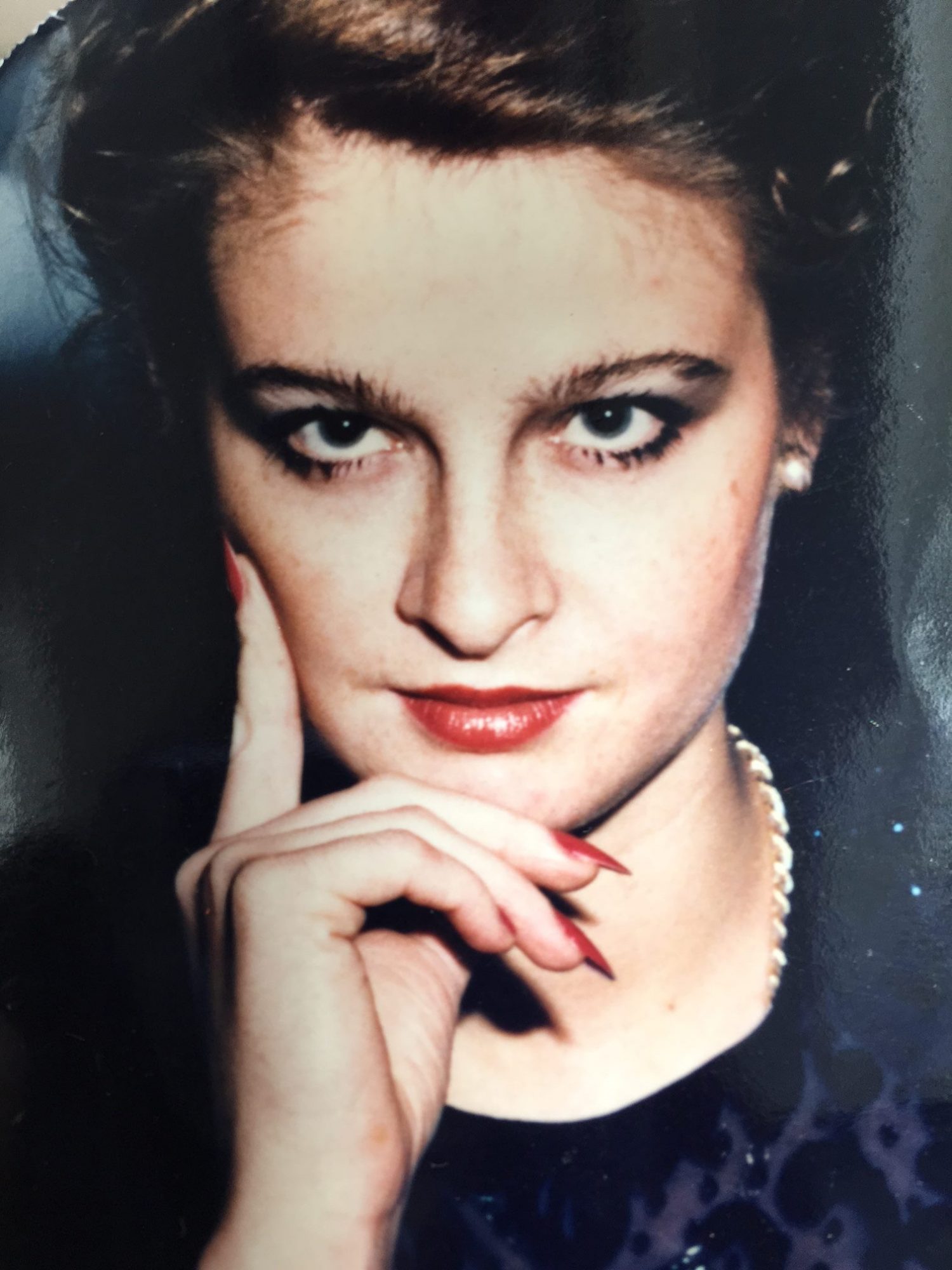 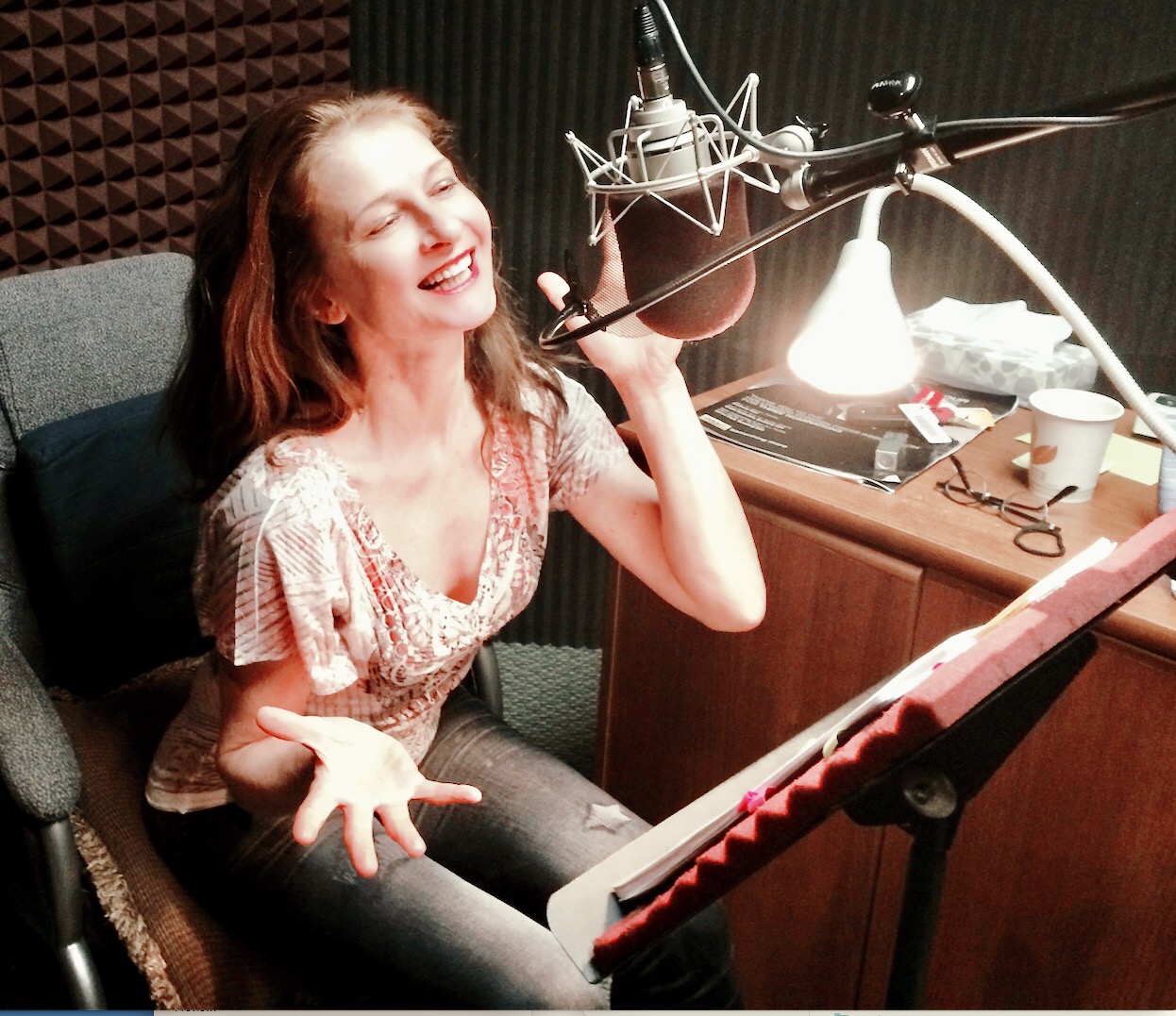 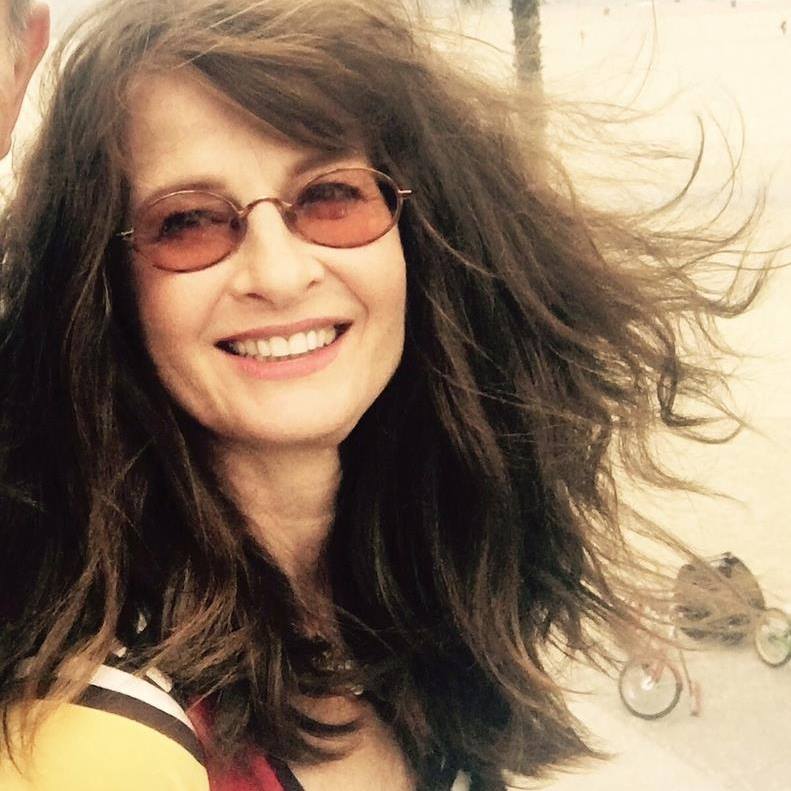 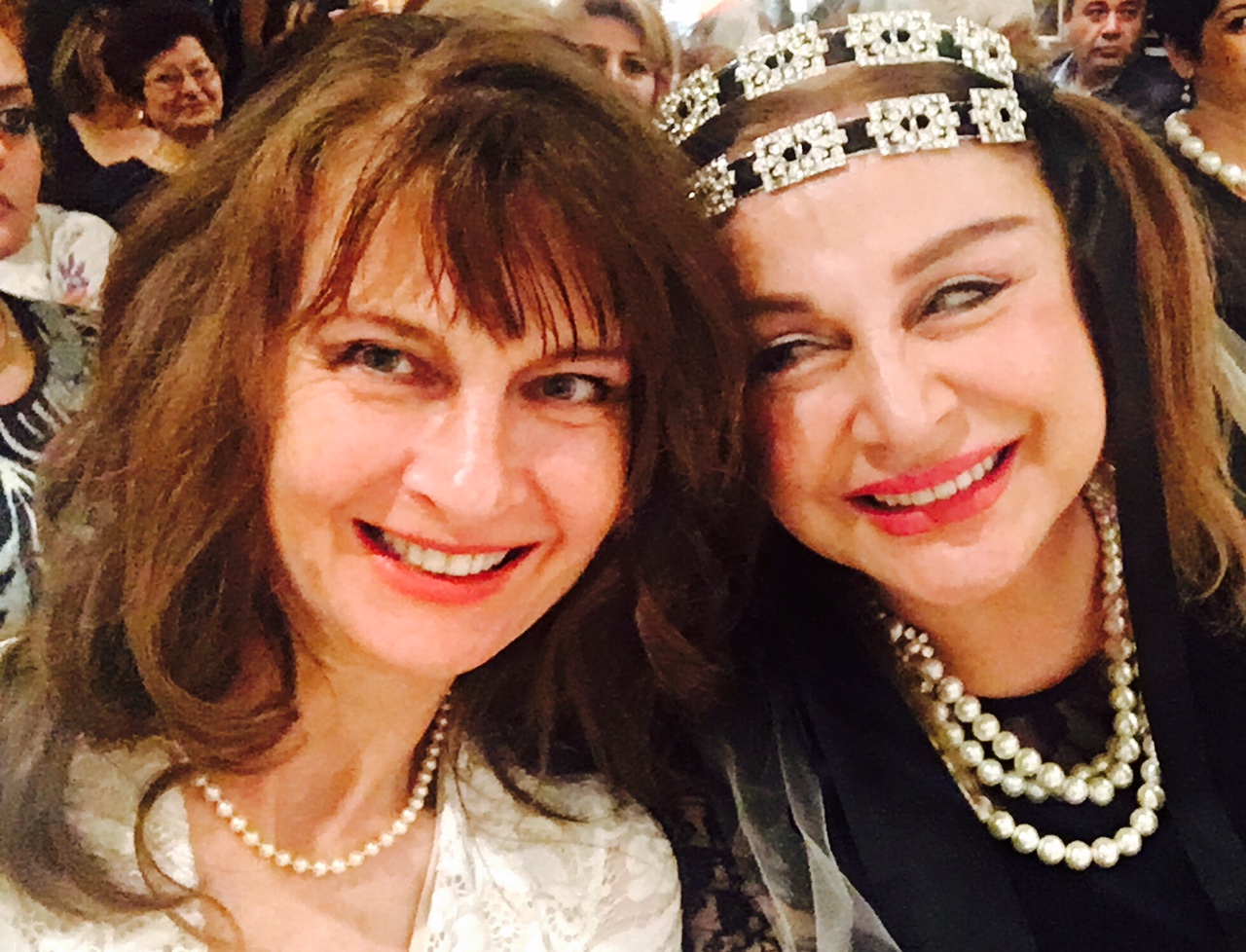 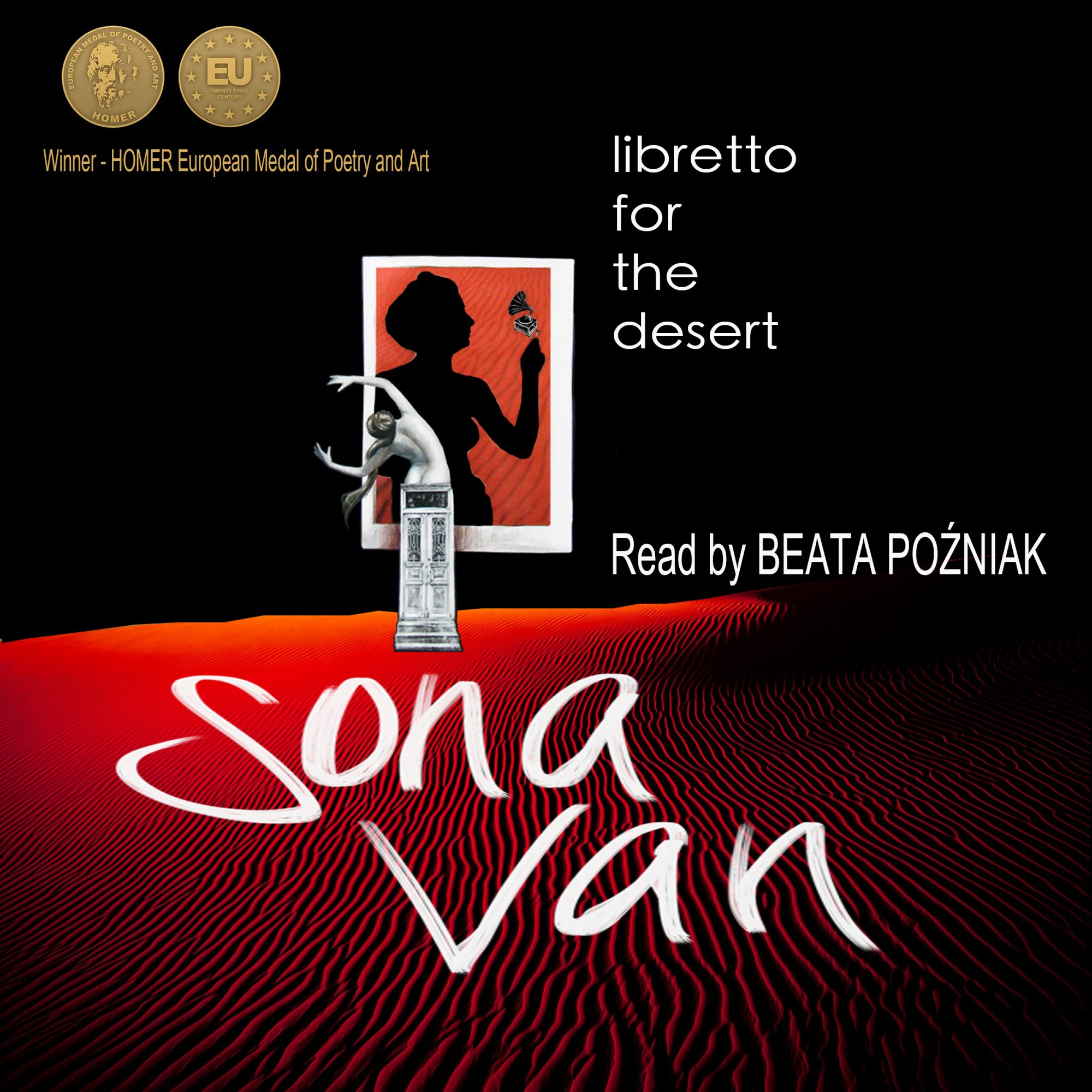