Meet Anjalee Jasmine of Respect All Love in Pasadena 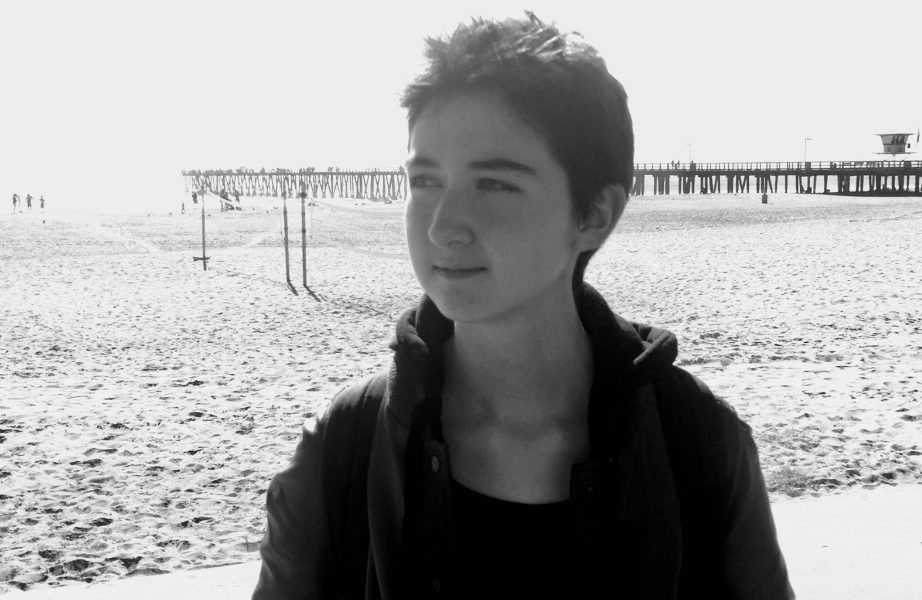 Today we’d like to introduce you to Anjalee Jasmine.

Anjalee, let’s start with your story. We’d love to hear how you got started and how the journey has been so far.
A couple of years ago, on Christmas Day, I was 15 and in the back of my mom’s van with the family, headed to a nice dinner. I smelled our lemonades and felt the heat blowing from inside the car to keep us warm, yet my mind was elsewhere. I am privileged in many ways and have had my own struggles I wouldn’t wish on others. But there is still far worse happening in the world, affecting me or not. Wanting to contribute, I had tried to volunteer at a number of organizations for over three years, but I was always too young. I remember exclaiming to my mom and sister on multiple occasions, “I’m just trying to be a good person and they won’t let me!” We all laughed about it, but it still bothered me.

In the van ride, I started considering it a little differently. I had found no luck trying to help elsewhere, so what could I do on my own? How could I help in my own way? …without a job, a car, or adult age. One of the causes I am passionate about is LGBTQ+ rights, especially since figuring out my sexuality a couple of years prior. I thought of Lilly Singh, one of my role models then and now. She started #GirlLove on social media and has grown it with merch and outside partnering. I thought maybe I could start something of my own, for LGBTQ+ rights and awareness, on Instagram and then grow from there into a nonprofit. This was the start of what is now Respect All Love.

Within a couple of weeks, I picked the name, planned a few posts, and launched the Instagram account. I talked about my own experiences, stories of LGBTQ+ role models, and taught what various terms meant. A few months later, I expanded Respect All Love onto other platforms, including Facebook and Twitter. About a year after starting on Instagram, I moved beyond social media, and was planning a live Respect All Love event in Hollywood! My family and friends knew about Respect All Love and my plans grow it into a nonprofit that holds events and creates change around the world. But it wasn’t until the event was in the making, they saw the vision with me. This first show was called Noise Before Silence and included solo acts of music, dance and comedy. I cast the artists, held rehearsals, directed, produced and also performed in the show. It was held on March 31st, about a week and a half before the LGBTQ+ holiday the Day of Silence, where the show’s name came from. I planned for about three months, saving $20 or less at a time from what my parents gave me for food and gas until I had enough to rent a small theater. The show was a success! About 30-40 people showed up for $10/ticket, we sold food, I got lighting done for free by a student, free graphic design by another, and the best reward of all: The audience and artists enjoyed the experience, gained awareness, supported everyone, and I knew this was something I do now.

Since then, Respect All Love has had another event called Pride Property: What Do We Really Own? At another Hollywood theater and will be hosting a third event this year in 2020. I have met several LGBTQ+ organizations and great people behind them, that I plan to partner with. Plus, I will start production on LGBTQ+ related film projects, speak at schools, and more to positively impact as many people as possible. This is only the beginning. There is a lot in store for myself and Respect All Love. Coming soon near you!

Overall, has it been relatively smooth? If not, what were some of the struggles along the way?
I had been turned down many times for not being of age, which meant I also didn’t have much experience. I am a performer but had never put on my own show before, worked with an organization, nothing. Turned out, I was more likely to get in my own way than other people! I cold-called asking so many theaters, schools, etc. for a location and volunteers. When it finally came that I found my theater, I was waiting for something to go wrong. But if I hadn’t pushed myself to go anyway, tour it alone, sign the contract, I would’ve deeply regretted it. And I would’ve never found out what I was capable of. Often those insecurities come from other people. You have to catch them and separate it from your own mind. I wanted to do it, so I found a way. Turns out, I could do it at my young age with no experience. And now I have some experience to do it better next time. I will still get just as overwhelmed and nervous, but that’s pretty much part of it. It means I care.

Money was also a stress as it often is for anything, at any level. I still didn’t have a job, I just transferred to my 3-year college, living in the dorms off of what my parents could give me each 1-2 weeks. But it was important, so I made sacrifices. I didn’t starve or anything, but I was cautious. I barely got enough to rent the cheapest theater on my list and just in time. It worked perfectly for us, we got a real stage and leveled seating, enough space for the dancer to perform, but it was close.

The things we really care about are worth the challenges and the extra work. They often mean learning discipline, courage, and skills you may have never considered. And I think I’m a better person for it.

Please tell us about Respect All Love.
I am a musician, dancer, filmmaker, and I brought that to Respect All Love because it’s what I know best. We are most known for our shows, with acts including music, dance, poetry, stage combat, and film. The variety is part of our uniqueness. We accept any and all acts, as long as they are quality and supportive of our purpose. Bringing a number of individual artists together for a show, I challenge them to not just work on their pieces but also group some of them together for additional new pieces, created by me, by them, or a combination. We are raising their voices by giving them a platform, and also creating a new voice by blending them beautifully. We are local to LA right now, which is great for our current community but will continue to grow until we are worldwide. The ultimate goal is traveling worldwide, partnering nonprofits, educating, and putting on shows at cirque du soleil – level.

Our events aren’t just ‘We’re here, We’re queer,’ but about all of us in that space together, LGBTQ+ or not, family/friends or not, whatever we are. We focus on the humanity factor, on love and on unity. I want our events to make you emotional, dancing with joy, awakened, and inspired. I want to give you hope. And I think we achieve that each time.

The Respect All Love team is always positive, organized and thoughtful. We love to reach out to the people and encourage everyone to be their best and enjoy. We hope you enjoy what we do and would love for you to be a part of it, whether that is as a supporter, a team member, or a performer. Thank you, thank you, thank you.

What has been the proudest moment of your career so far?
It’s hard to pick a proudest moment, as I feel that after every event, or rather during it. But I suppose the best was that first event, Noise Before Silence. The first of many to come. The day of, in the theater, I had everyone setting up, unloading, I was running around, it was chaos. And then audience members starting coming. People were here to see what I created and for a purpose. I came out after finishing soundcheck to open the doors and greet all the people I knew. Then, right before starting the show, I went into the bathroom to have a moment to myself. I looked in the mirror, smiled, and said (quietly so no one would hear me), “I did it.”

One minute later, I walked out on stage to greet the audience and welcome them to Respect All Love’s first show, Noise Before Silence. I talked about the purpose behind the show, what it’s been like since starting on Instagram, and how thankful I was for each of them showing up. And then, the show began. The first performers walked out on stage, and I watched from the wings. Tears came to my eyes, and I tried not to cry because I had to get back out there soon. I sat watching what I created, realizing my vision became a reality. My heart filled up with love just as my eyes did with happy tears. I was touched. 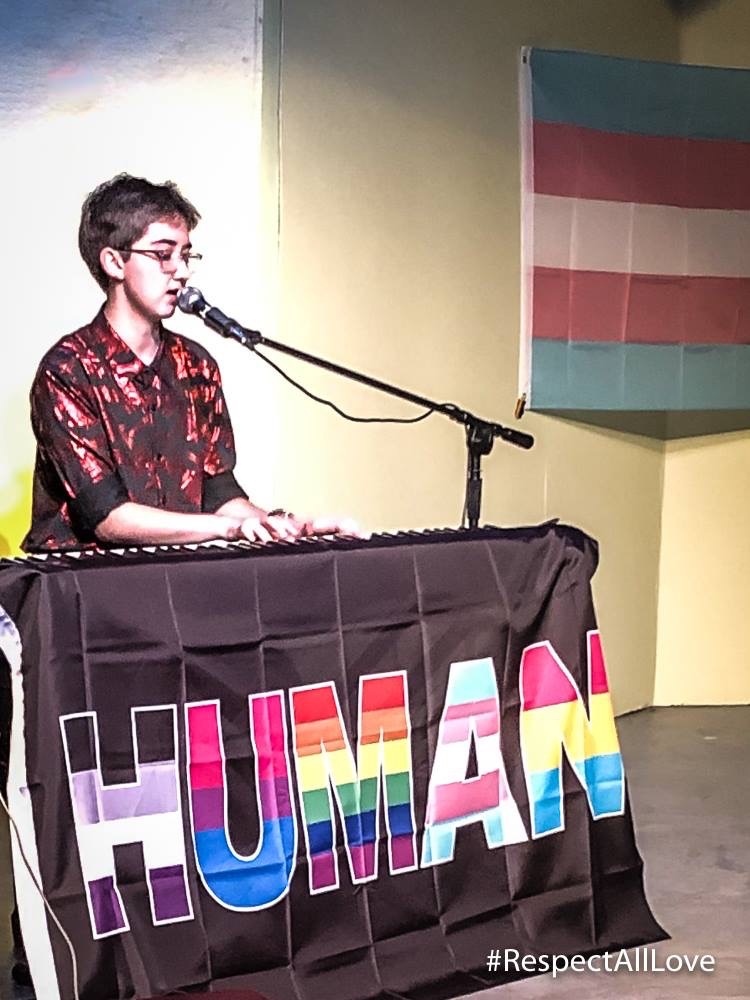 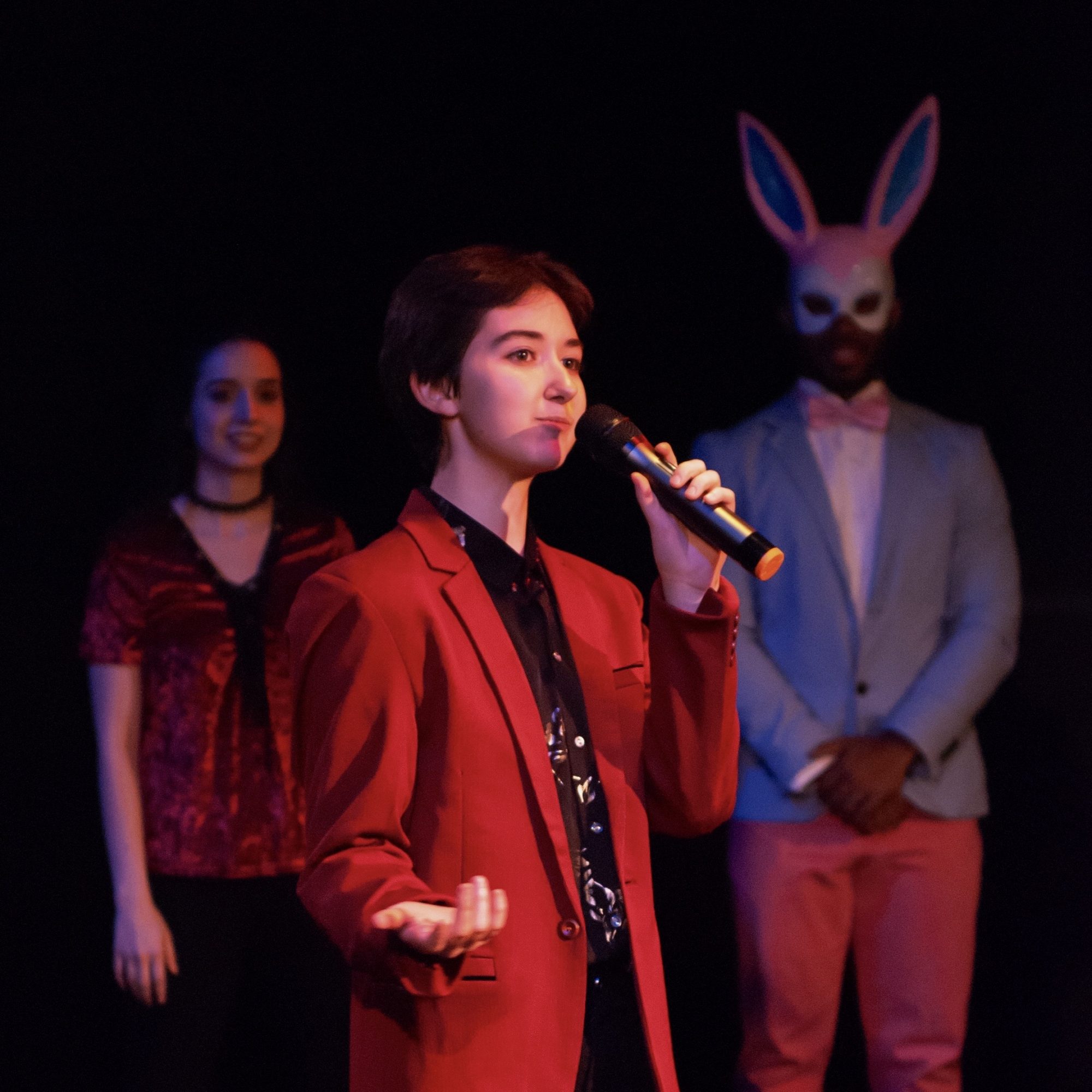 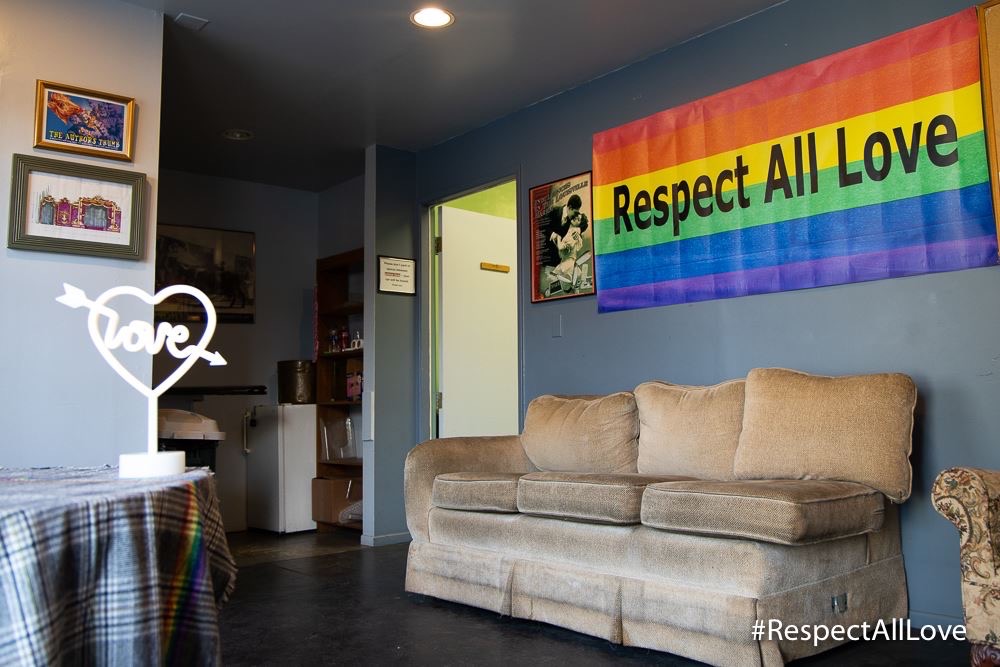 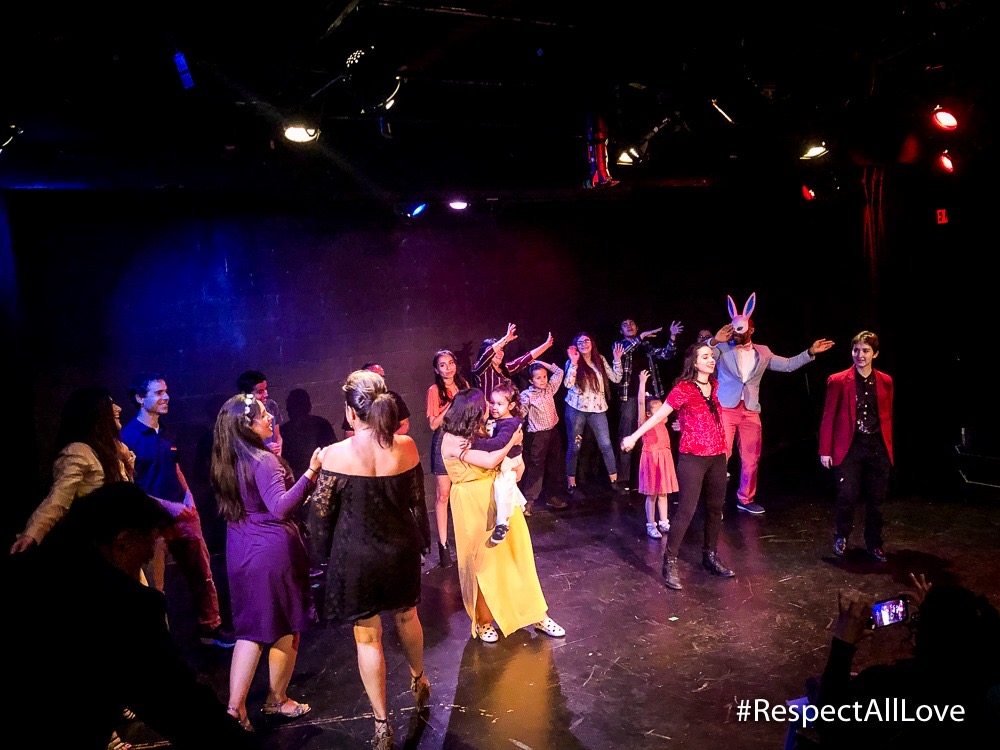 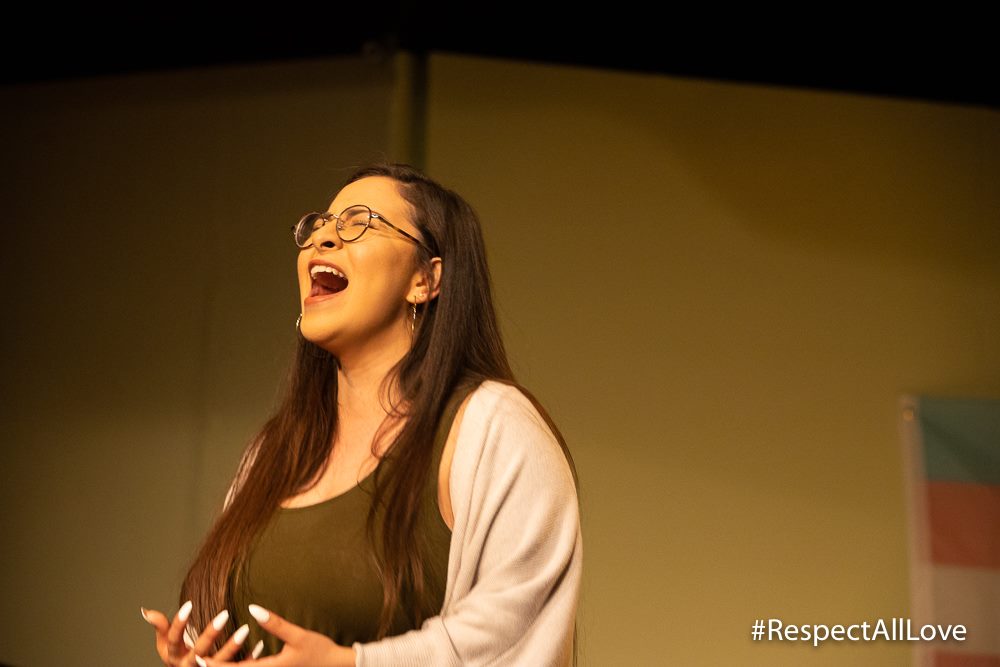 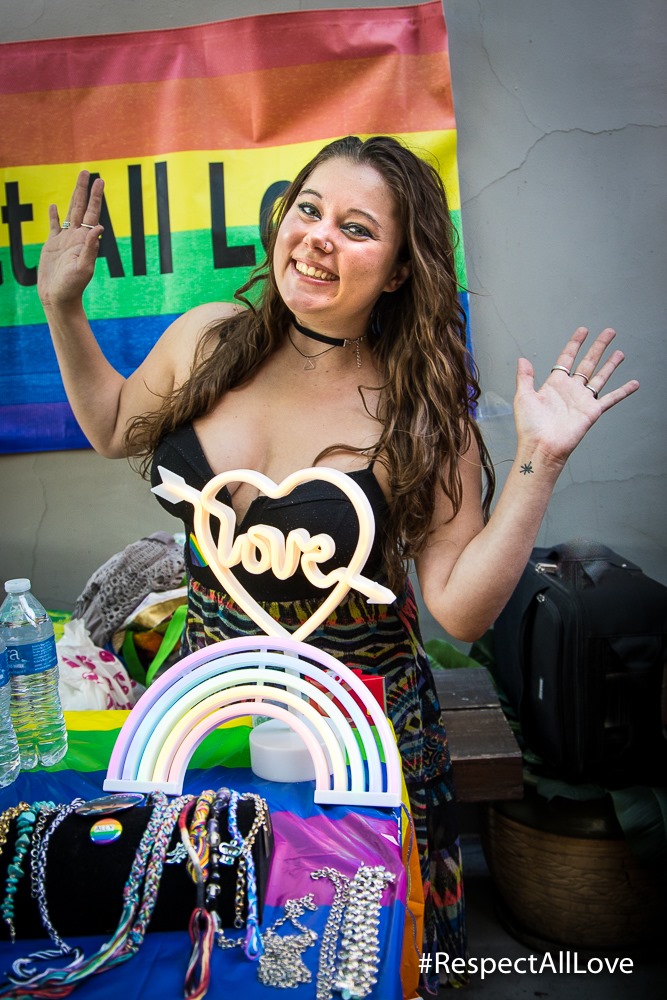 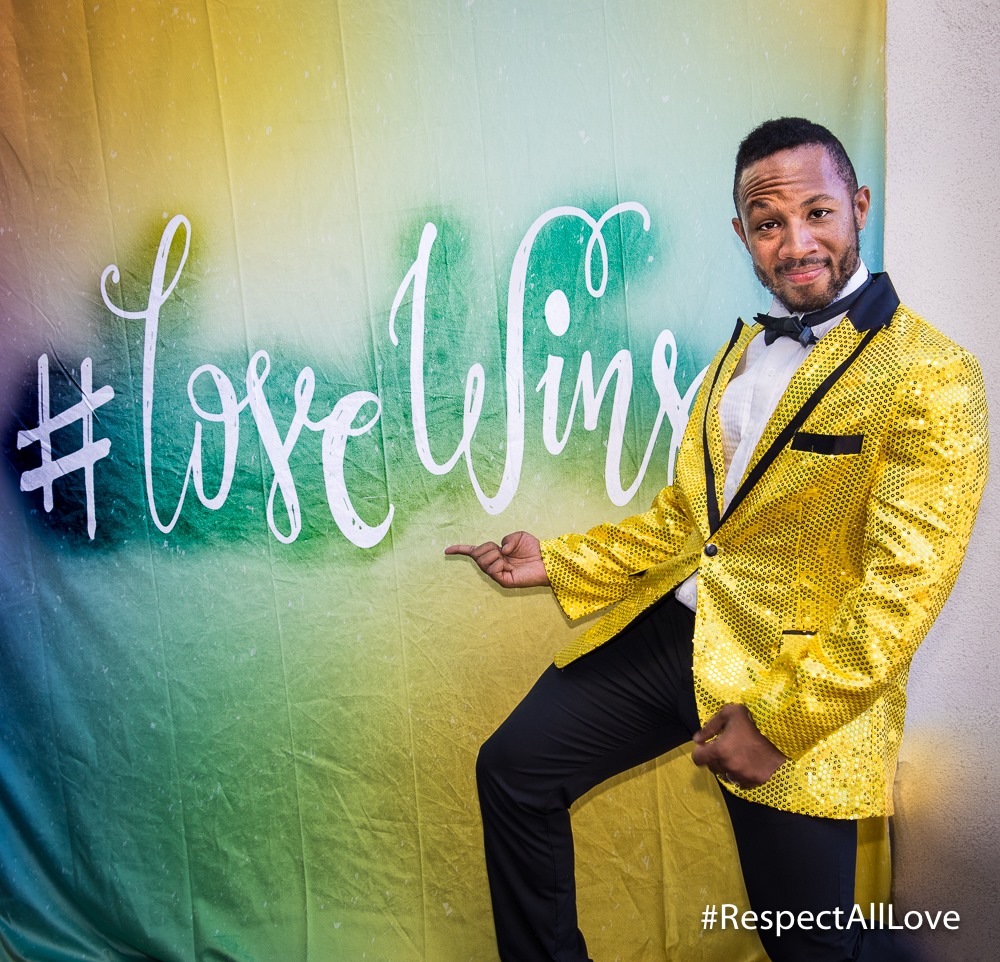 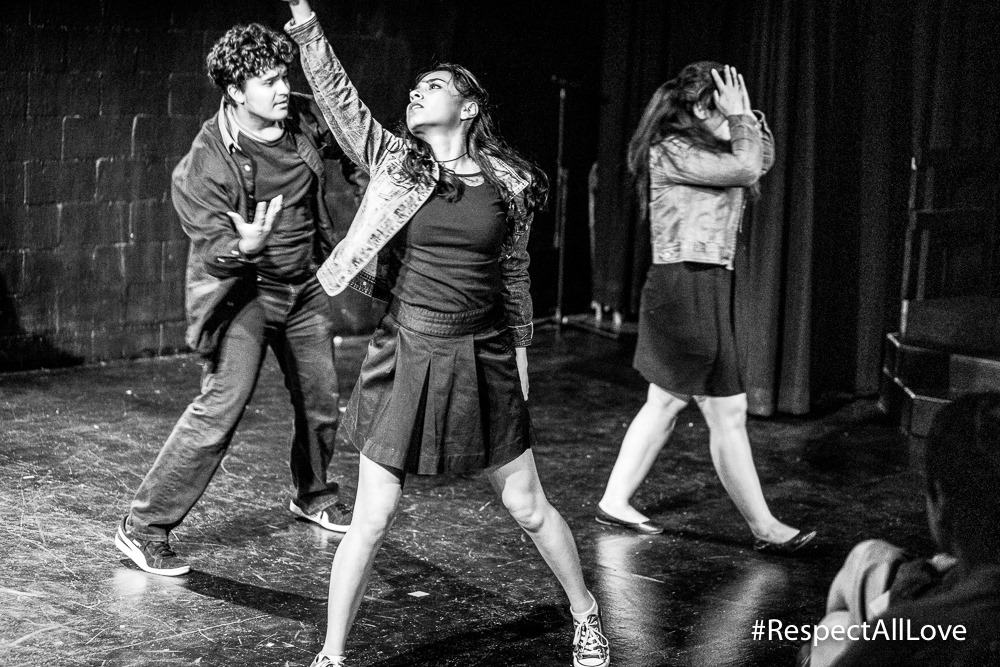