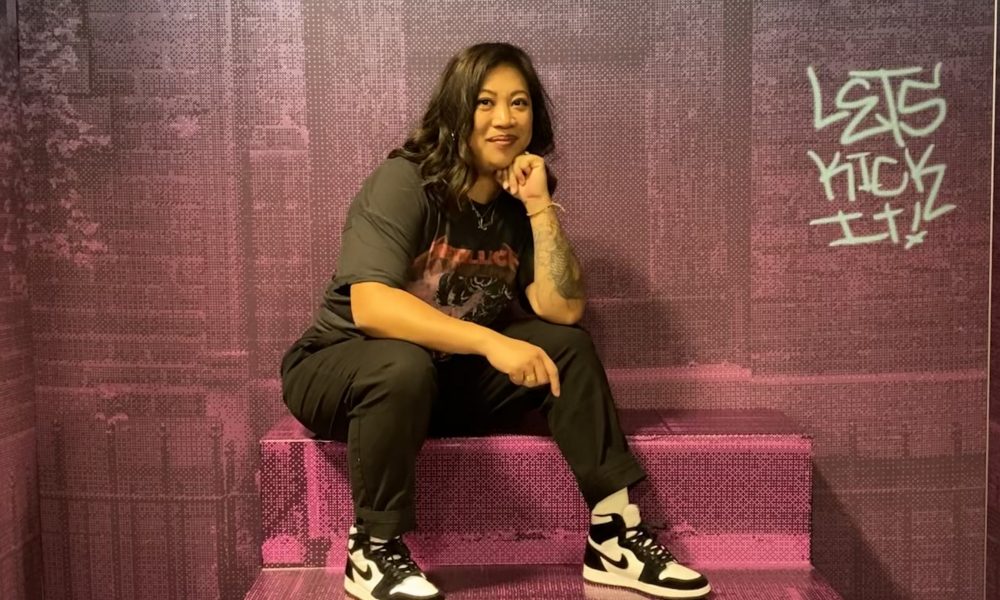 Today we’d like to introduce you to Angela Magdangal.

So, before we jump into specific questions about the business, why don’t you give us some details about you and your story.
Being a Chef and Restaurant Owner was actually a second career choice. For sixteen years, I was an apparel and graphics designer. Like most Filipino-American households, cooking was not considered a career choice being that it was a family-oriented necessity.

In 2016, I was between jobs and I started to lose motivation being an apparel designer. I was always intrigued by the food industry, and I took that time as an opportunity to pursue another career that I was passionate about. Next thing I knew, I was in the Culinary Management bachelor’s program at the Art Institute Hollywood.

While in school, I worked as a food stylist and recipe developer for different food brands and products. It was an easy transition from designing clothes to food layout and recipe videos. Soon after I started working as a prep cook at my favorite Japanese restaurant. It was a small kitchen and team so I worked close with the chef and was able to work multiple stations. I relished in the fast-paced environment and there was so much more I wanted to learn that I ended up cooking for three other French restaurants with well-known chefs in Los Angeles.

In Summer 2019, weeks before I graduated from culinary school, my dad suddenly passed away. In a time that I should be rejoicing, I was mourning and I felt unmotivated again. While taking a leave of absence from work so I could be with my family, I received a call from my friend, Andy. He proposed a business opportunity to run a restaurant concept that was in the works and wanted me as part of the team. At that time, a restaurant was the furthest thing from my mind; I was emotionally numb and thought to myself that I am not a seasoned enough cook to run a restaurant. I couldn’t commit right away.

One night, my dad appeared to me in a dream and he told me to enter a cooking competition. The message he gave me was to go for it, do what makes you happy, have people try your food, and eventually open my dream restaurant. I woke up from that dream inspired and driven to prove to myself that I am smart, hard-working, and a passionate professional cook. Plus, Andy’s proposal was a rare and golden opportunity.

Pinky’s Hot Box opened in September 2019. It’s a fried chicken sandwich restaurant inspired by Nashville hot chicken. Alongside Andy are two other partners, Vernon and Alan, whom are entrepreneurs with their own specialties and together we make a symbiotic relationship. Without their guidance and support, running the restaurant would not be easy. There are everyday challenges and sacrifices that we face, but we make it a point to bring solutions not complaints, and a remind ourselves our goals and intentions.

We’re always bombarded by how great it is to pursue your passion, etc – but we’ve spoken with enough people to know that it’s not always easy. Overall, would you say things have been easy for you?
It has definitely not been a smooth road. Going back to school to get another degree was a financial burden. I found myself working two part-time jobs whilst attending school full-time. My social life became non-existent among my family, friends, and my husband. Luckily they understood and supported my pursuit to fulfill my dreams and gave me all the emotional and mental support I needed to stay on track.

I also felt at a disadvantage being in my late-30s working in a restaurant where the cooks are either veterans or young cooks. I had to work faster and smarter in order to stay ahead. With my lack of years working in a professional kitchen, I feel like I am constantly proving to others and to myself that I am a good cook who is capable of running her own business.

Even at Pinky’s Hot Box, operating a business and managing a staff comes with challenges that I never had to face before. But overcoming them helps me learn, grow, and develop as a leader.

We’d love to hear more about your business.
Pinky’s Hot Box is a hot chicken joint that is inspired by the Nashville hot chicken. We are a fast-casual establishment where customers order at the counter and then a staff member delivers food at their table. We named the restaurant after my family nickname, Pinky, because we wanted to evoke a friendly atmosphere, with a welcoming and informative staff, where diners can relax while withstanding the heat from their hot chicken sandwich. Even the exterior of our building is pink!

Our menu is simple with the OG Sando being our signature item. It is a buttermilk fried chicken breast sandwiched with coleslaw, pickles, comeback sauce, and a butter-toasted brioche bun. We also have an OG Loaded Fries which are all the fixings in the sandwich, piled on a bed of seasoned fries and mac ‘n cheese. Chicken tenders is included on the menu as well.

Customers have five levels of heat to choose from: southern, mild, medium, hot, and blazing! Southern is our non-spicy version. Different doses of cayenne pepper is used throughout all the other levels, but we use a combination of the hottest peppers on earth for hot and blazing. To help mellow out the heat, we offer accoutrements of side dishes: coleslaw, potato salad, mac ‘n cheese, and seasoned french fries. We are a scratch kitchen, meaning we make mostly everything in-house.

What I am most proud of with the company is the team that I have employed. Majority of them do not have a culinary background, but they’re so eager and motivated to learn, and I love that I can pass down my knowledge and experiences from working in a professional kitchen to them. We try to foster an atmosphere of teamwork, friendship, and appreciation for all the contributions the employees make, and as a result, they’re engaged and willing to grow with the company.

What is so great about our company is that we are not bogged down by any rules. We truly listen to customer feedback and are able to make adjustments to give them the best product and hospitality that you normally don’t get. We love to get to know our customers. After all, they’re why we’re here.

What were you like growing up?
My love of cooking stems from my grandma. Being raised by her, I was forced to stay in the kitchen so that she could keep an eye on me. But I didn’t mind. I loved all the aromas that was coming from the kitchen and I always stayed so that I could get the first scoop out of the pot. She would put together all the fillings for lumpia or siopao and I would mix it all together, fill and roll them up in wonton wrappers or dough, and then stuff mass quantities of it in gallon zip lock bags to freeze for consumption later. We’d fry a small batch and I’d get to eat piping hot, crispy lumpia.

One day she was cooking dinuguan, a Filipino savory stew usually made out of pork offal simmered in a gravy of pork blood, garlic, and vinegar. At the time, I did not know this, Filipino kids grew up knowing this dish as “chocolate meat”. So when I read ‘pork blood’ on the container and saw congealed blood inside, I was immediately turned off and have not had dinuguan ever since.

When I stated to experiment cooking other cuisines, my Lola was not impressed. She disregarded my cooking and complained that I don’t cook Filipino food. But my thought was, why cook Filipino food when I’m at home with the master chef of Filipino cuisine there. As I got older and moved away from home, my relationship with my Lola became estranged. She even scoffed at me when she found out that I was going to culinary school. Her attitude just gave me more fuel to succeed.

When I opened Pinky’s Hot Box, my mom wheel-chaired my Lola to the friends & family event. She tried the fried chicken tenders and she LOVED IT! She smiled as she praised me and at that moment, I felt like I won. 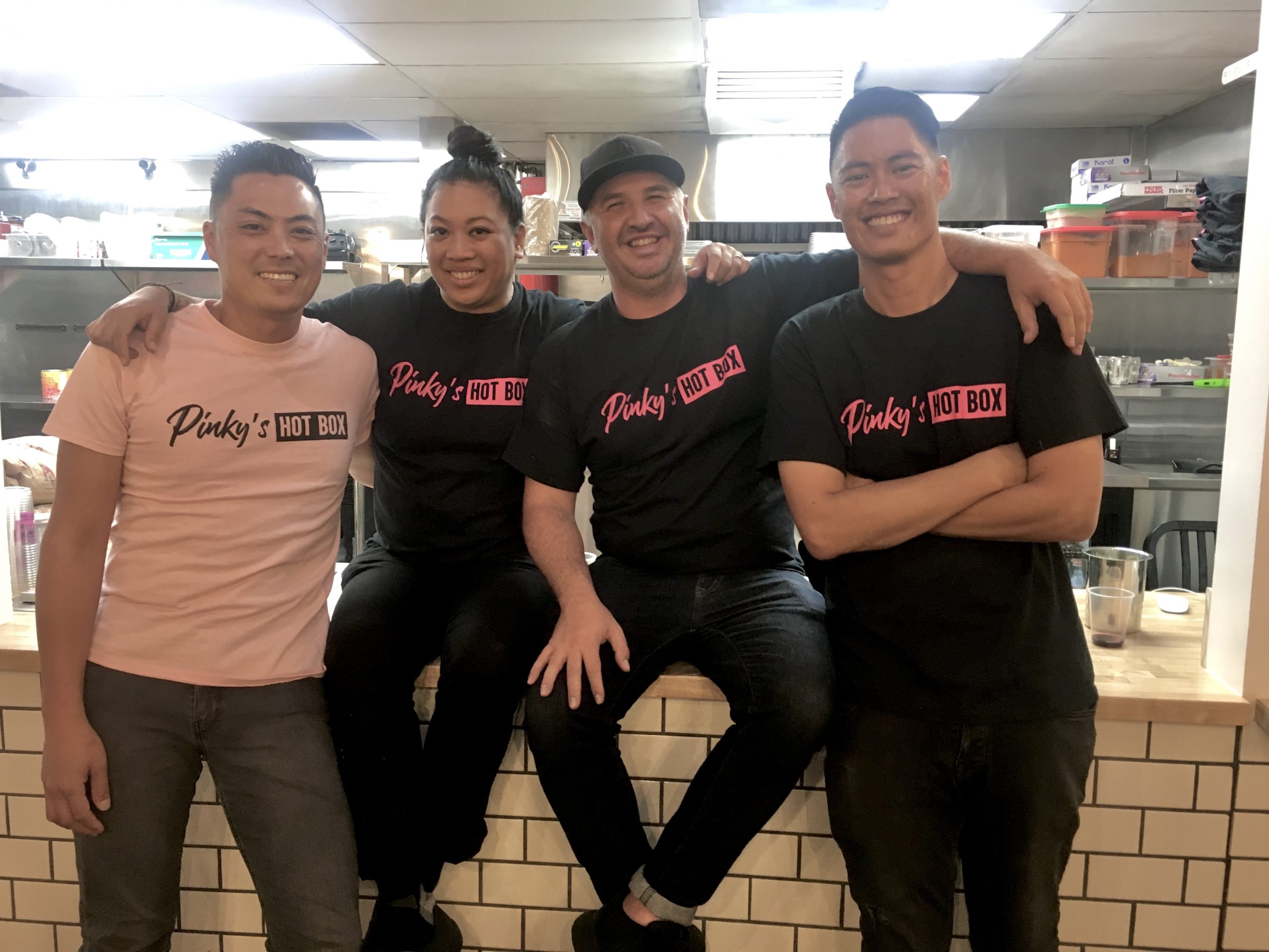 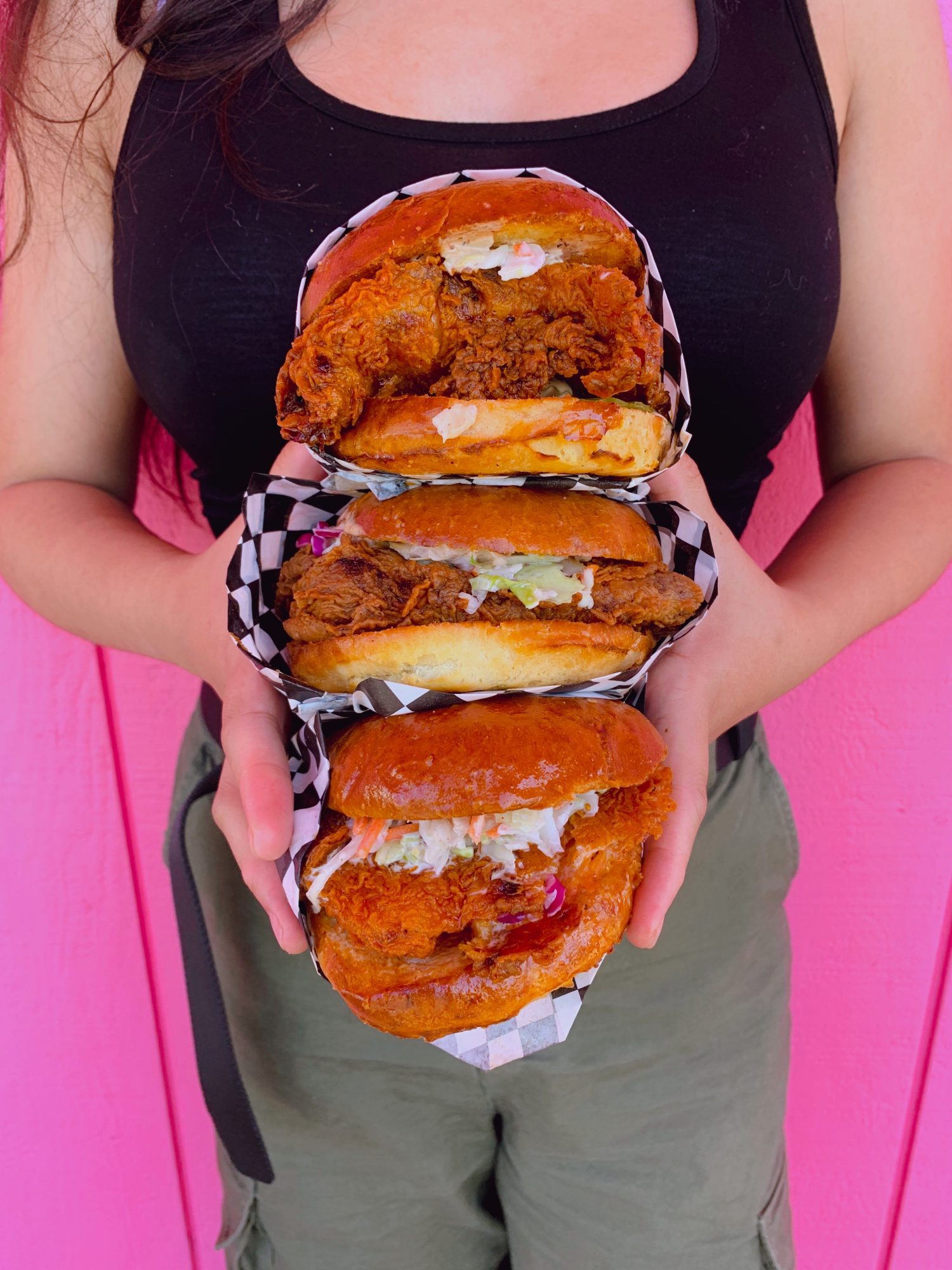 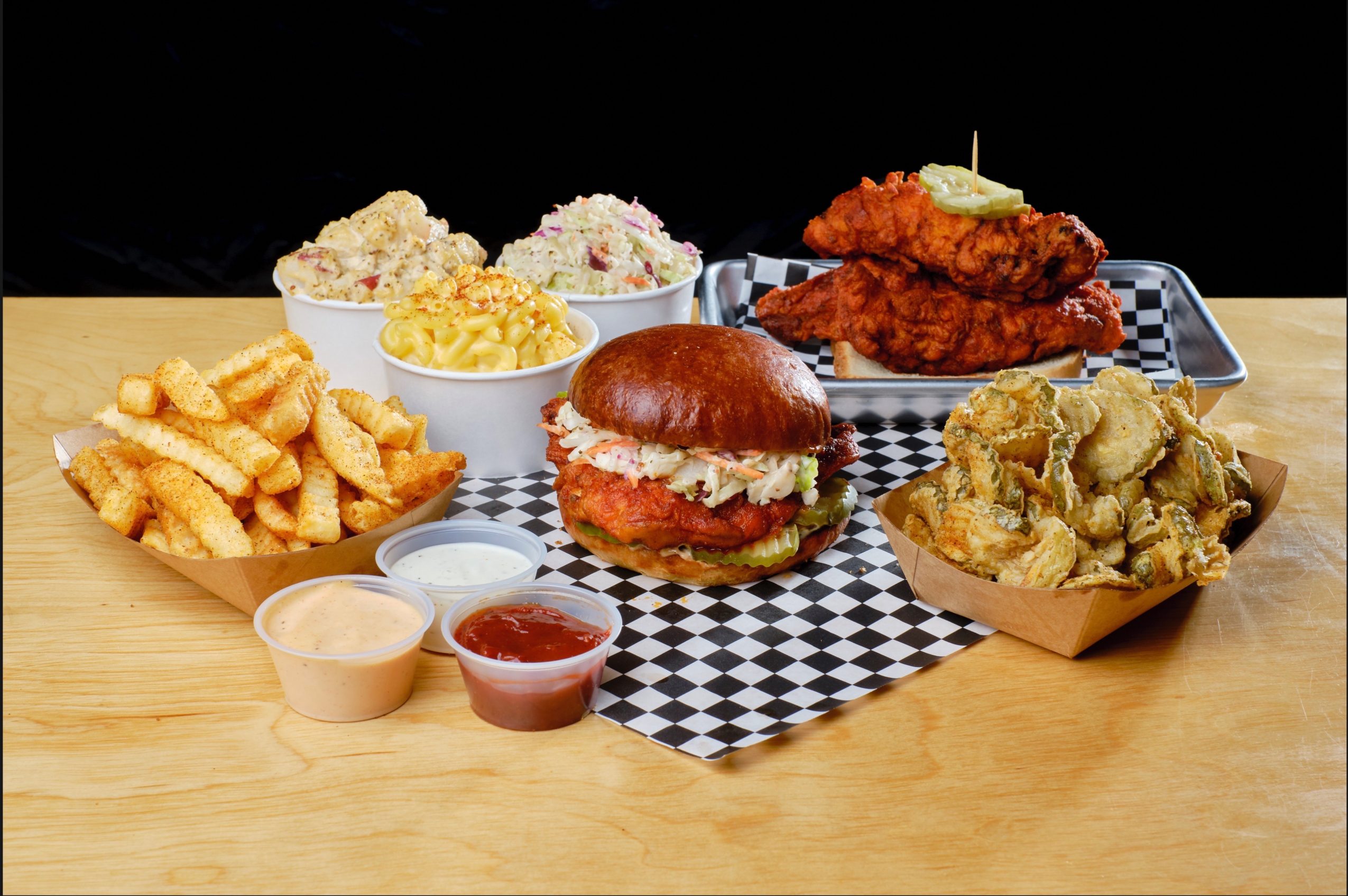 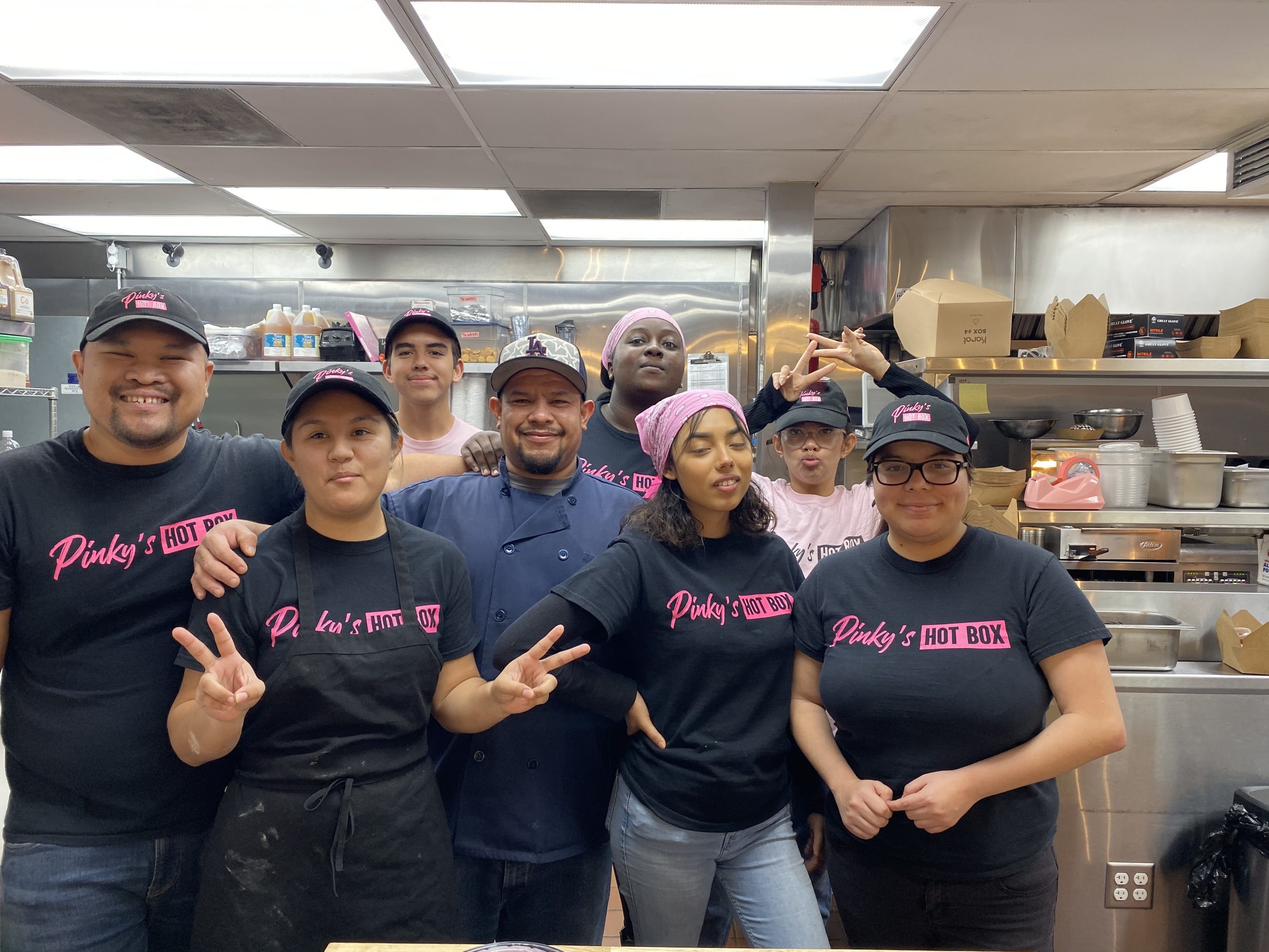 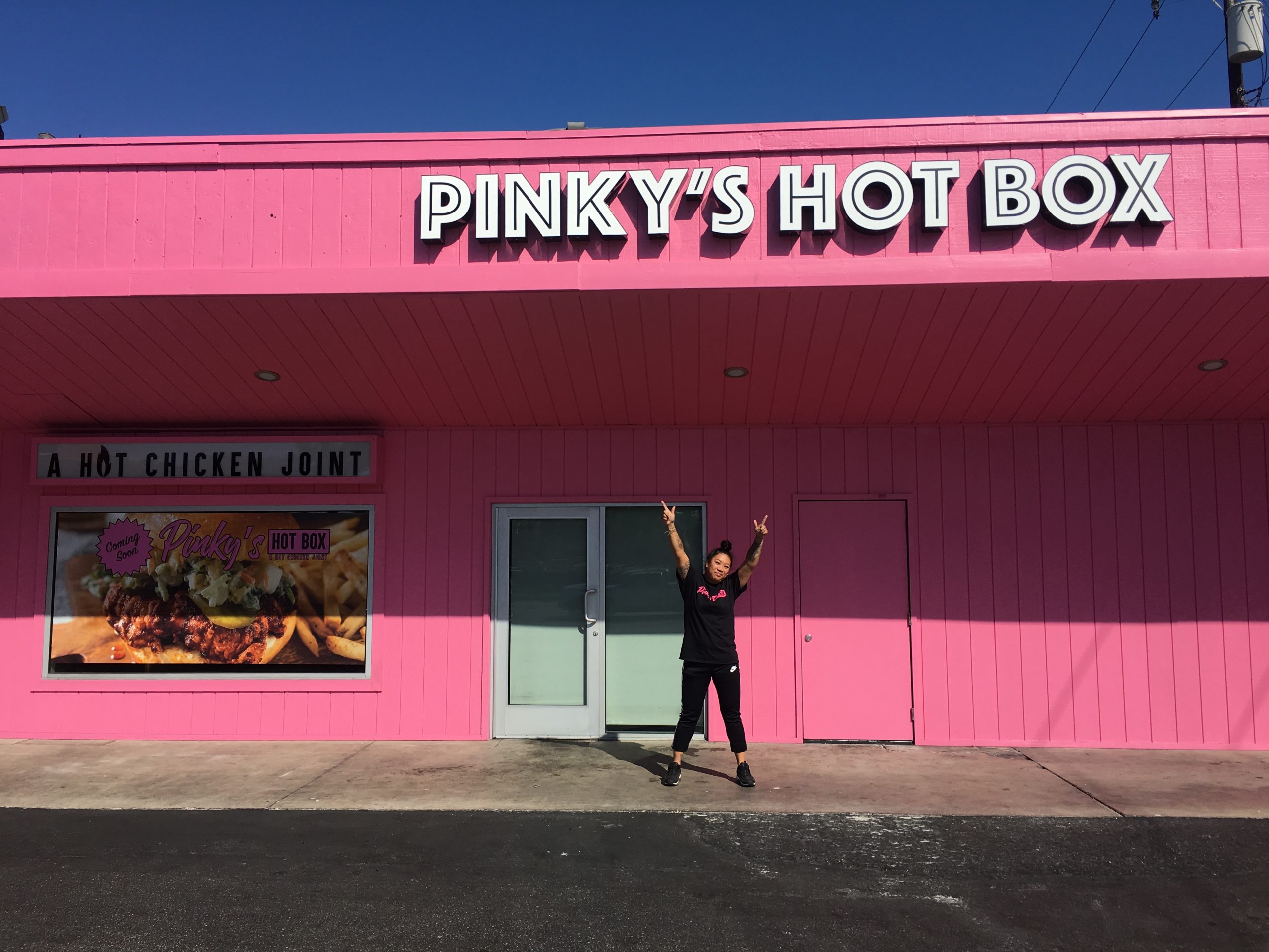 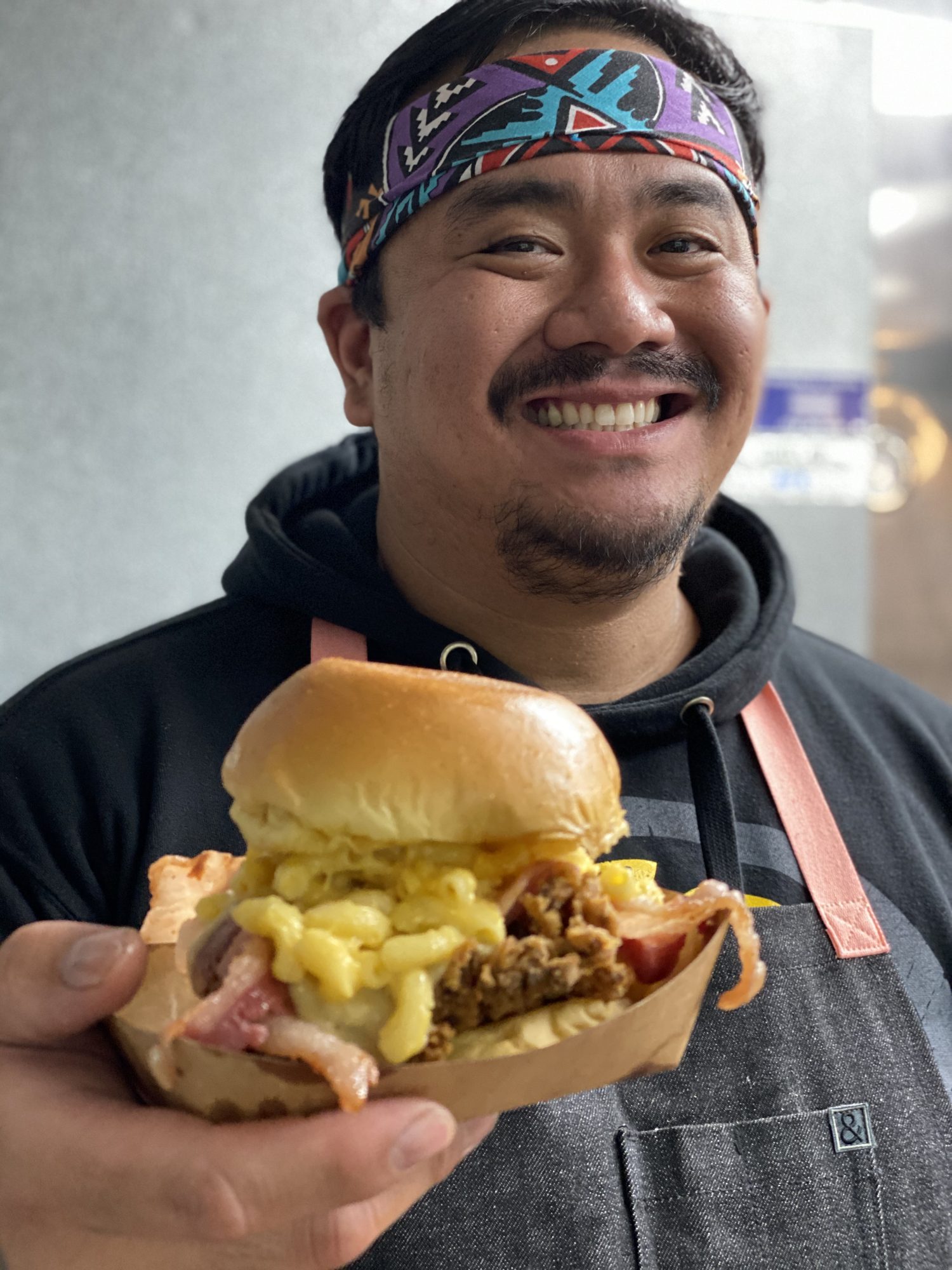