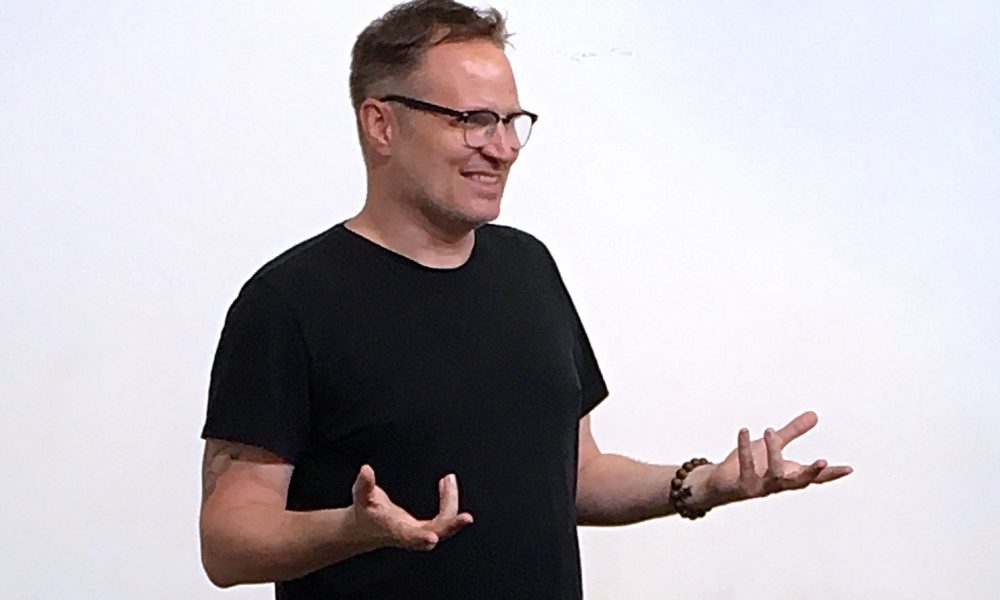 Today we’d like to introduce you to Andrew Wood.

Andrew, can you briefly walk us through your story – how you started and how you got to where you are today.
I did theater enthusiastically as a kid, in high school, and then in college at Duke University. I spent a couple of years after college in Berlin, Germany, where I interned with a theater company and produced and directed a play in English. I attended as much theater as I could in Berlin and elsewhere in Europe. Then I returned to the US, to New York, and was admitted to the directing program at the Yale School of Drama. While there, I studied with and assisted world class acting teachers such as Earle Gister and Evan Yionouis. Upon graduating, I returned to Germany briefly for another internship, and then moved to New York City to pursue a career as a theater director. I assisted directors at companies such as Manhattan Class Company and Mabou Mines, and directed for Syracuse Stage, Emerging Artists, Fordham University, and Clark University. After a brief stint in the exploding internet business, I decided to enter a Ph.D. program in German literature at Stanford University, where I was offered a generous fellowship. While in that program, I began teaching an acting class in San Francisco. The class flourished, and I realized that teaching acting was my true passion. I completed the doctoral program, but continued to teach in San Francisco while doing so. After four years there, I expanded my studio to Los Angeles in 2008. I taught in both cities for two years, and then decided to relocate full time to Los Angeles, and focus full-time on my teaching here. Andrew Wood Acting Studio has been recognized by Backstage as a Top Los Angeles Acting School and as a place for actors to get a solid foundation in classical acting training in Los Angeles. Its alumni have appeared on Curb Your Enthusiasm, The Man in the High Castle, Homeland, Animal Kingdom, and Training Day (the TV show) among other major television shows. In addition, I founded a theater company, Los Angeles, Uranium Madhouse, and have produced and directed four productions for the company to date.

At Andrew Wood Acting Studio, I am dedicated to helping students strive for a high degree of artistic excellence. This involves attracting students who are interested in this goal as well. It’s been an interesting challenge to develop a profile for the business that inspires students to commit to the long-term challenge of developing their skill at their craft, even as they face the immediate pressures of finding representation, booking jobs, and advancing their career.

Also, over the course of teaching a class cycle, students will encounter resistance within themselves, and this will manifest itself in various ways, from avoidance to confrontation. I have had to develop skill in meeting this resistance, and helping students to find their way through it, when they are open to such help.

Andrew Wood Acting Studio – what should we know? What do you guys do best? What sets you apart from the competition?
Andrew Wood Acting Studio offers acting classes, in technique and scene study. The approach taught at Andrew Wood has as its hallmarks the revolutionary insights of Yale School of Drama acting teachers Earle Gister and David Hammond. The approach was synthesized into its current comprehensive and cohesive from by Evan Yionoulis and Mark Brokaw. Yionoulis currently teaches the last year and a half of the acting curriculum at the Yale School of Drama, and Mark Brokaw teaches there as well. In the approach, acting is understood as the process of bringing the actor’s own visceral need for deep connection and significant relationship to bear on a role.

The approach emerges from a solid foundation in the tradition of the great Stanislavsky, but it is contemporary and in some ways revolutionary in the new perspectives it offers on the challenge of fulfilling a role.

The Advanced Workshop is for students who have familiarized themselves with the approach taught at the Studio and have demonstrated their dedication to their work. This class gives such students the opportunity to work with Andrew and with each other in a more concentrated way than in the Essentials class. Students generally begin work on the scenes a month before the class starts. This means that when work is first presented in class, it is in a more developed condition than is possible in the Essentials class. I often partner with Leah Zhang, certified Alexander teacher and MFA actor, for the scene work in the Advanced Workshop. Some Advanced Workshop class cycles focus on contemporary material, others on Shakespeare or Chekhov.

The culture at Andrew Wood Acting Studio emphasizes dedication, commitment, excellence, collegiality, and a love of dramatic writing and the challenge of embodying it. I am proud that this is increasingly recognized among the community of actors in Los Angeles.

What is “success” or “successful” for you?
When I am able to help an actor do work that is visibly an undeniably stronger than when they brought in to class, I feel that I have succeeded. I seek to help actors bring their personal vulnerability to bear on the experience of the character in a way that is immediately and almost mysteriously captivating. Helping someone do this is success for me.

Helping someone to grow in their work on a single role is one thing. But an even more significant hallmark of success to me is seeing the level of work that an actor initially brings into class change. When I see this happen, I know that I have helped someone strengthen not just their understanding but their instincts. Seeing this is always a thrill.

It’s great to see people booking jobs as well, but to me that’s second to seeing someone’s skill at the craft change. When I see that happen, I know I’ve made a difference.