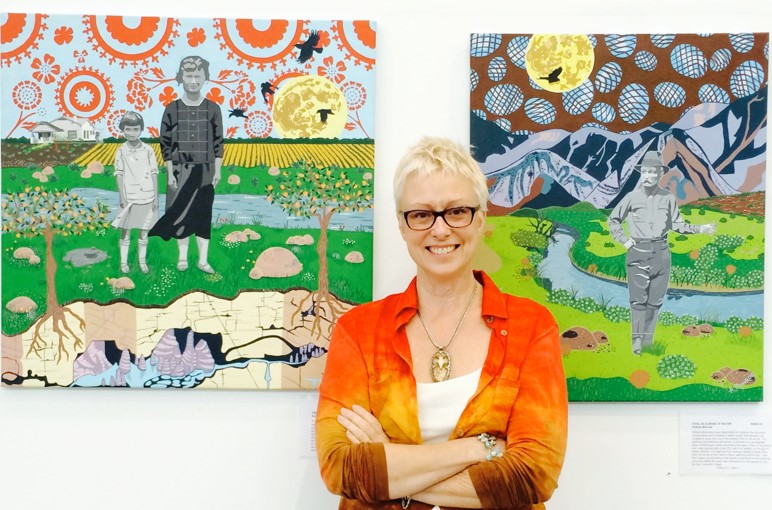 Today we’d like to introduce you to Andrea Monroe.

Thanks for sharing your story with us Andrea. So, let’s start at the beginning and we can move on from there.
My story starts in a suburb of Chicago called Berwyn. Talented as a little girl, my mother enrolled me when I was about eight years old for a semester at the Art Institute of Chicago. I’d travel on the subway with my older sister to that fantastic museum where my classmates and I sketched from room to room. I think what we call pastels today were known as cray-pas and with them, I created a lime green polka dot bug. That drawing won an honorable mention and was exhibited around the world. But alas, my art education ended after that due to lack of funds in the family. I remained creative the rest of my life and worked in less conservative job environments that helped me to flourish in other ways.

I actually didn’t begin painting until I gave birth to my son at the age of forty. Not being in any way a typical Disney-everything mom, I decided to paint his dresser with whimsical sea creatures. Next came his bedframe, then bookends, and a step stool. After that, I painted a small line of children clocks and bookends and began selling them to kids stores and on the web. But painting on canvases didn’t happen until I had a spiritual epiphany.

My early paintings were indeed spiritual and somewhat rooted in my Catholic upbringing. As with the sea creatures, I painted “out of the box.” Jesus had a green face. Mary’s was blue. My “Last Supper” painting was blessed with spiritual leaders in all kinds of colors. I became increasingly aware of shapes and patterns and spent the longest time “dotting” everything in my pictures. When it was time to move on from spiritual images, I began painting with a sense of humor often described as tongue-in-cheek. “I’m not Kissing Your Ass Anymore” had a lot to do with my attitude toward my marriage and a little to do with the intrigue I had about things from my past… like the wax lips on the boy in that painting.

Then divorce entered my world. I basically painted my way through the trauma with symbolism, busyness, and lots of movement. That series is quite personal to me and helped me exercise less restraint in my painting.

My most recent work has centered around a theme called The Harlots. The more I paint, the more I realize how triggered I am by my life experiences. I painted my first Harlot after an ex-boyfriend called me one when he saw what he thought was a provocative photograph of me on Facebook. Yeah, me, a sixty-year-old woman.

Great, so let’s dig a little deeper into the story – has it been an easy path overall and if not, what were the challenges you’ve had to overcome?
My main paycheck comes from work in the TV industry. I’ve been a Costumer for over thirty years. Used to be during my downtime, I’d spend it freaked out about when the next job was coming along. But after I began painting, I used my off time to be creative and daydream about my eventual retirement from the industry to being a full-fledged artist.

Invariably, the biggest struggle is keeping up momentum with my painterly side. Once I’m on a TV show, my creative self is sucked into fourteen–hour days for stretches of months. The paints and brushes are stored away. My next biggest struggle is making money as an artist. How does one put a price on creativity?

Andrea Monroe Art – what should we know? What do you guys do best? What sets you apart from the competition?
My friend refers to me as a star peg that doesn’t fit in any hole. Same can be said about the art I make. When painting the spiritual series, I called it Byzantine Pop. The Divorce series was Symbolism. Now? I don’t know what to call it. The best description that resonated with me was “a kind of Hyper-Realism.” That’ll do. In any event, I just don’t see work like mine anywhere. That can make things tough because there is so much herd mentality out there.

What moment in your career do you look back most fondly on?
I just sold my Harlot painting for the money I wanted for it. No gallery involved. Just me. And I’m tickled pink. 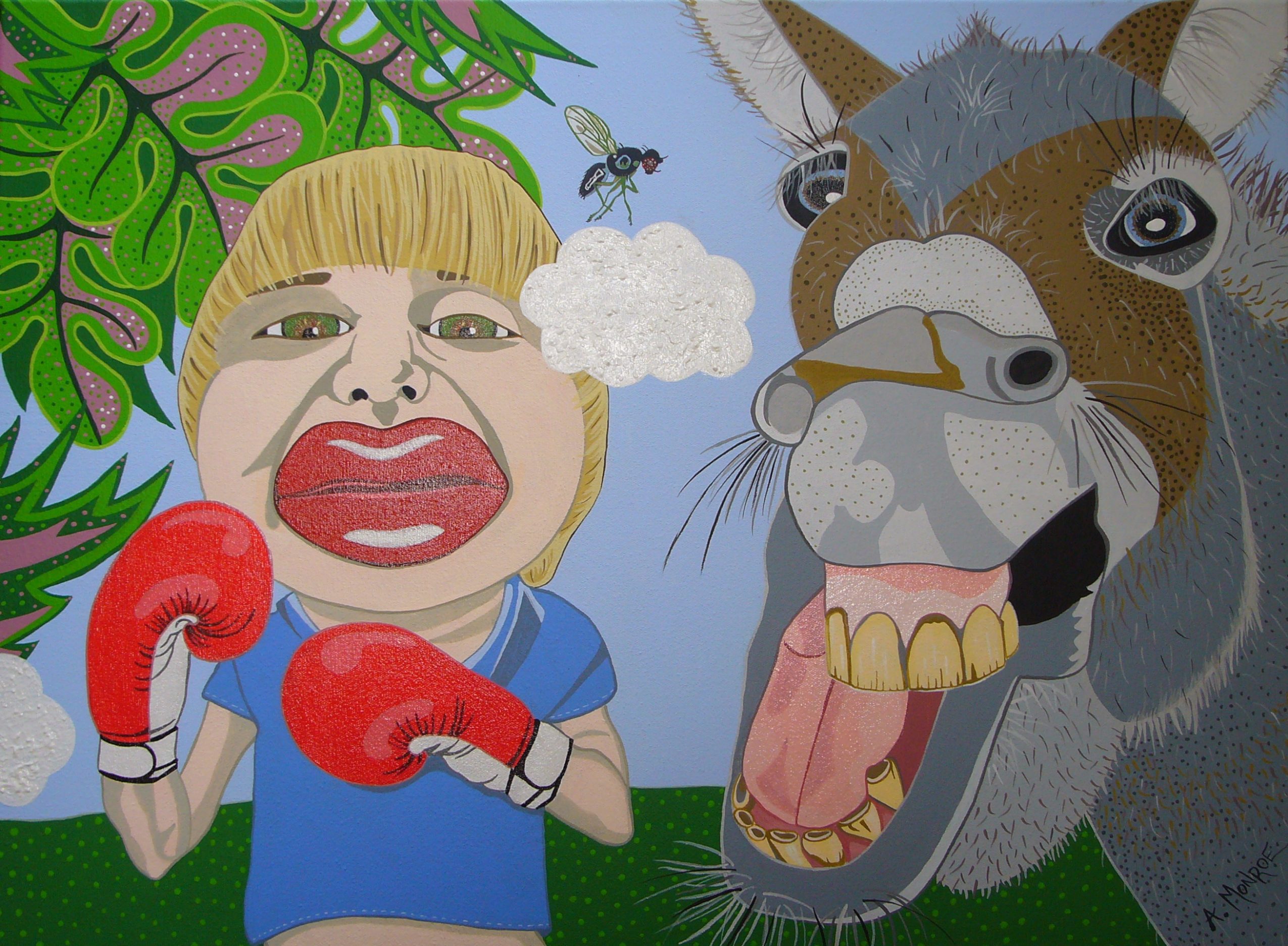 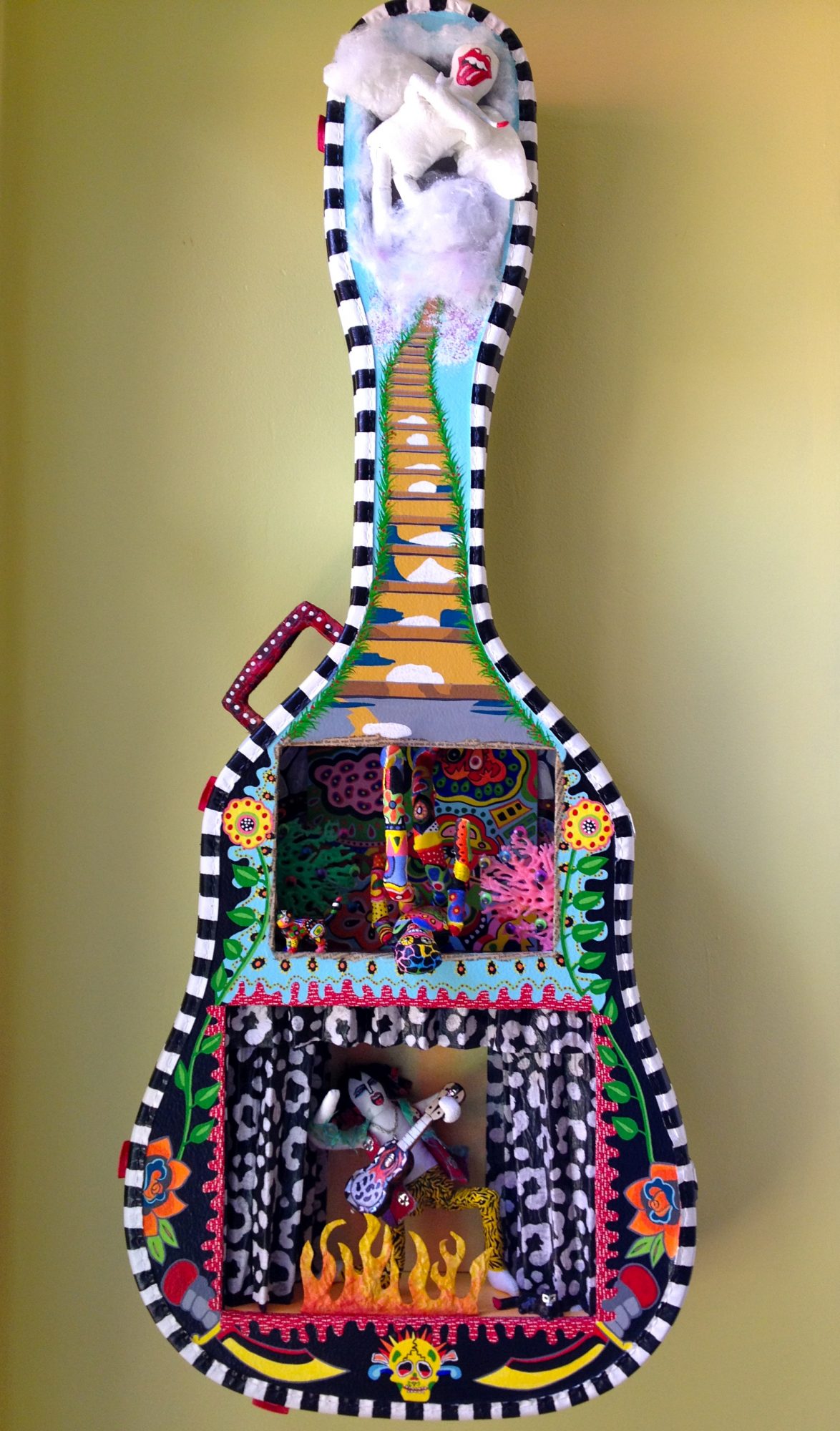 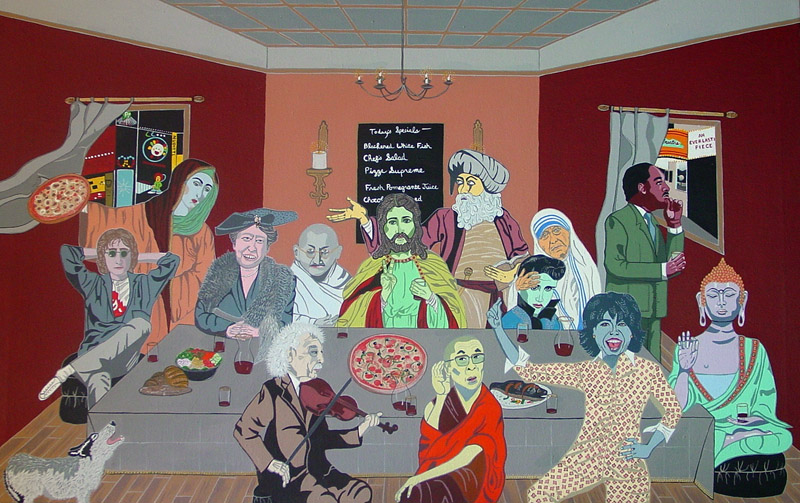 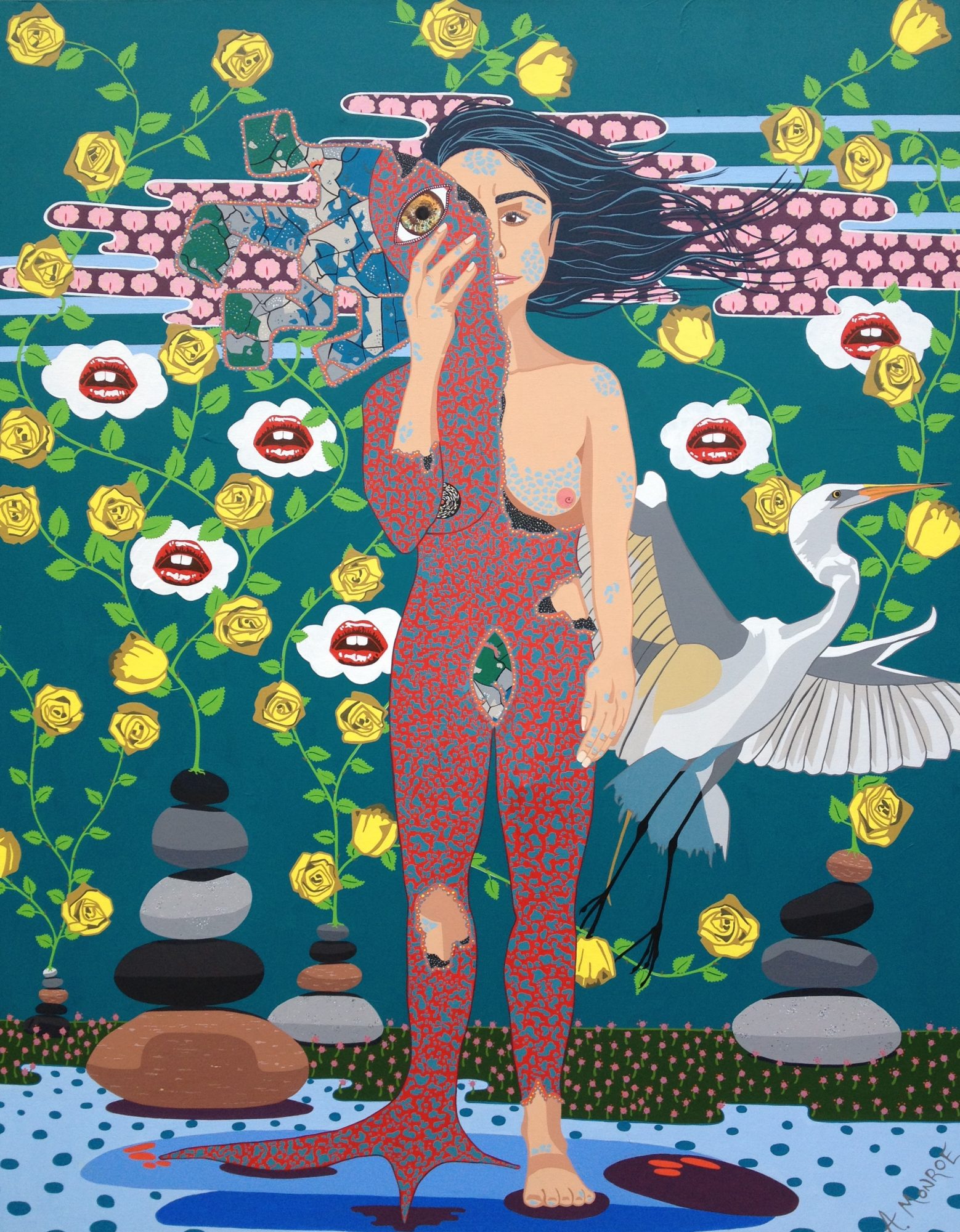 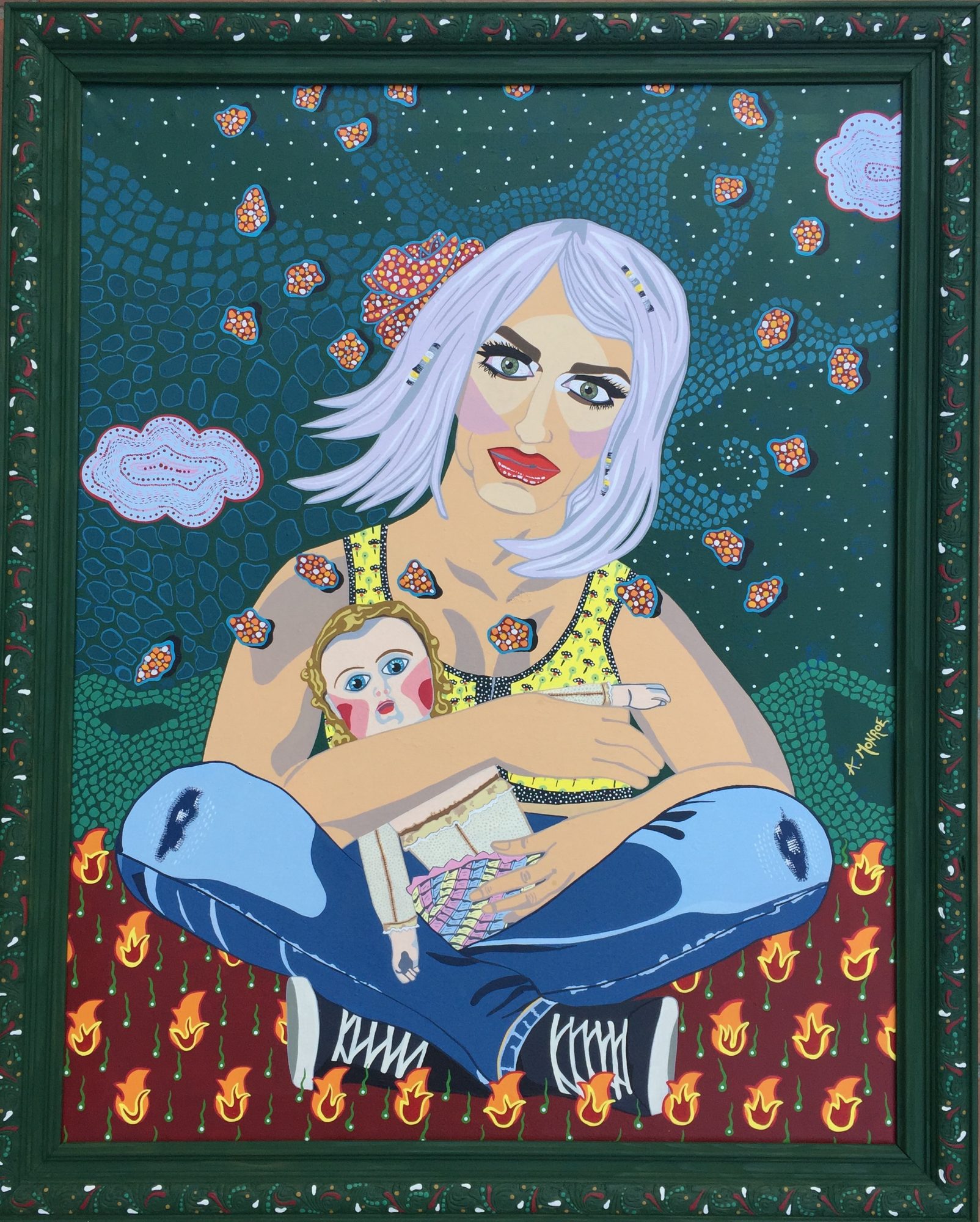 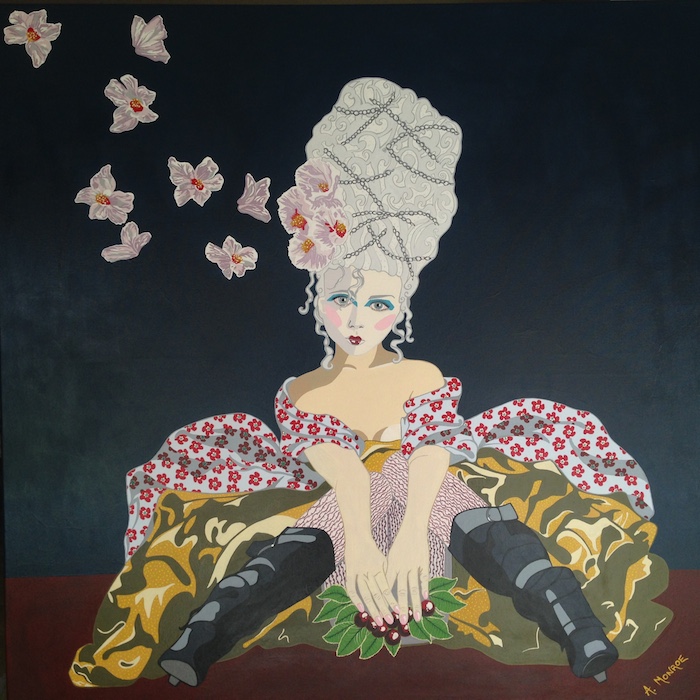