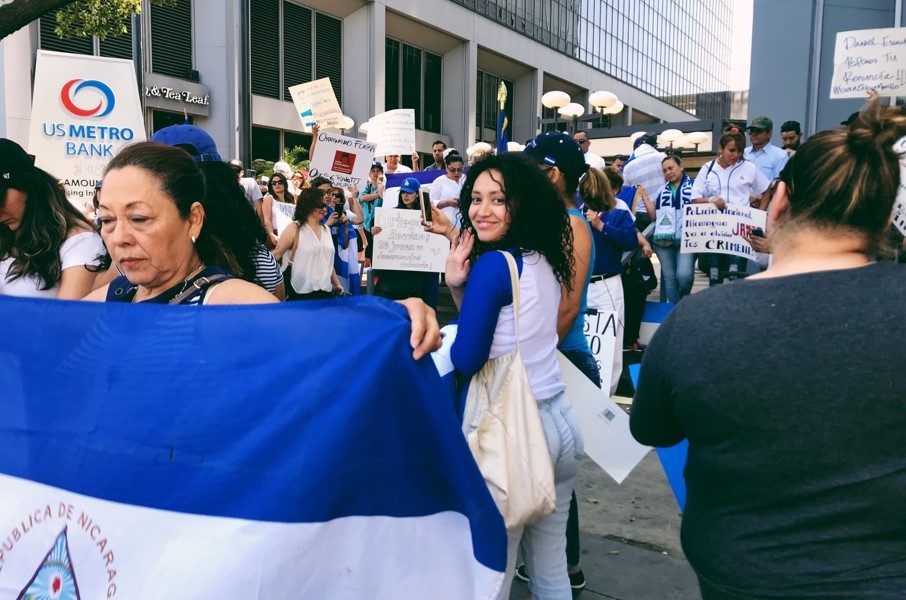 Today we’d like to introduce you to Anais Catalina Gonzalez.

Thanks for sharing your story with us Anais Catalina. So, let’s start at the beginning, and we can move on from there.
I remember on April 18, 2018, I was getting out of my night class out of custom I check my phone, and each notification headlined ” Widespread protest broke out in Nicaragua due to government changes in the social security reforms.” I remember falling asleep that night feeling uncertain. I wake up the next day April 19, 2018, only to see Nicaragua in pain, university students, and civilians were being attacked by paramilitary groups since this day I wake up every day to see Nicaragua in shambles.

My story with Nicaragua begins since I am in my mother’s womb where I first felt the love of a Nicaraguan mother. My Nicaraguan story begins to unfold, when I first traveled from my home of Los Angeles to Nicaragua, I was about one year old, stepping into the country that gave birth to my mother, and I did this for 17 years. Each of these trips worked as a chapter in a story, filled with traditions, culture, people, vibrant youths, and a warm tropical sun. That each time I left, I took Nicaragua with me.

When I woke up on that April 19, 2018, to see the violent aggression towards the Nicaraguan people, I felt torn. This country that I was not born into, but it was part me, was being torn apart right in front of eyes through my phone screen. It was here where I decided that I was not going to be quiet on something that was not right. As the Nicaraguan people rose, I rose with them, and a whole new story is born Voices of Insurrection.

My first story with Voices of Insurrection comes when one Nicaraguan student name “Oso” (name is withheld in order to protect his identity) finds me on #SOSNICARAGUA, and we built a friendship, by bonding over the struggle. Oso tells me his experience, and I tell him about my constant travel to Nicaragua. He shares with me a writing “Generación de Búfalos: Somos Juventud” (Generation of Buffalos: Us the Youth) where he describes the beauty of youth, and their power to change the world, through fresh ideas and innovations.

These words resonate to me because as a young Nicaraguan born in the chaotic city of Los Angeles, I too can make a change. My Nicaraguan story begins in my mother’s womb, it continues with my constant travels, and my story on April 19, 2019, does not end it only grows, by uniting myself in the same struggle as Oso, and all the others Voices of Insurrection that are worth to be told.

Overall, has it been relatively smooth? If not, what were some of the struggles along the way?
Every day I am on my social media informing the public, of the human rights violation in Nicaragua, and I think the biggest struggle is feeling incompetent. At times I think to myself I am doing enough, or are people even listening to me? It is not easy to advocate for Nicaragua when many are not familiar with this country.

In addition, there are people who believe the civic uprising was created by external forces, in order to overthrow the Ortega Murillo Regime, when in reality it was a civic uprising by Nicaraguans, who for almost 11 years were discontent with the injustices concurred by the government.

Alright – so let’s talk business. Tell us about #SosNicaragua: Voices of Insurrection – what should we know?
It’s been ten months since the Nicaraguan civic uprising. Approximately more than 500 have been assassinated, 30,000 Nicaraguans have fled to Costa Rica, there are more than 700 political prisoners, and about 1,000 who have disappeared. In addition there approximately 60 independent journalist who are living in exile due to the death threats by government because of their efforts of reporting the human rights violation in Nicaragua.

In Nicaragua there is no Freedom of expression, a civilian can not use their national flag, or sing their national anthem because you are considered a terrorist. Daily there are abductions of civilians, who are forcefully taken on the charge of committing “terrorist acts.” The political prisoners are beaten, medical attention is not provided, and some do not even see the light of day.

Those who are in exile left their country, their family, their career, their studies, to only find themselves alone crossing borders and living in a country that is not theirs. Thus with all this, is where I come in. I have dedicated myself to advocate daily, by tweeting, by adding pictures on my Instagram story, by reposting videos on Facebook.

As I well attend marches here in Los Angeles, fundraisers, and I have organized panels with two students living in exile. Over these past months, my activism work has led me to engage with Nicaraguans via social media who participated in the civic uprising. With this engagement is how Voices of Insurrection came to be. I wanted to give Nicaraguans a platform where they can share their thoughts, experience, their story.

What sets me apart, perhaps is that I have set my time to actually interact, and listen to what my community has to say, and each day I learned something about them.

Any shoutouts? Who else deserves credit in this story – who has played a meaningful role?
My story can not be told without giving credit to the many people, who support and mentor me. My mother plays the biggest role. She taught me to speak against anything I feel that is unjust, and she has allowed myself to express myself, and to follow my passions.

It was through her where I learned that in order to support to a cause you have to be there, and which why at a young age my mother took me to marches supporting immigration. Plus she always made it clear to me, that in country like the United States where there thousands of people from around the world, I was always going to Nicaraguan.

Apart from my mother I give thanks to Oso and to all the other Nicaraguans who have engaged with me via social media, because they have sacrificed their lives, for a free Nicaragua. My mom and my fellow Nicaraguans are perhaps the reason I have inner bravery in me, to the risk and make a change. 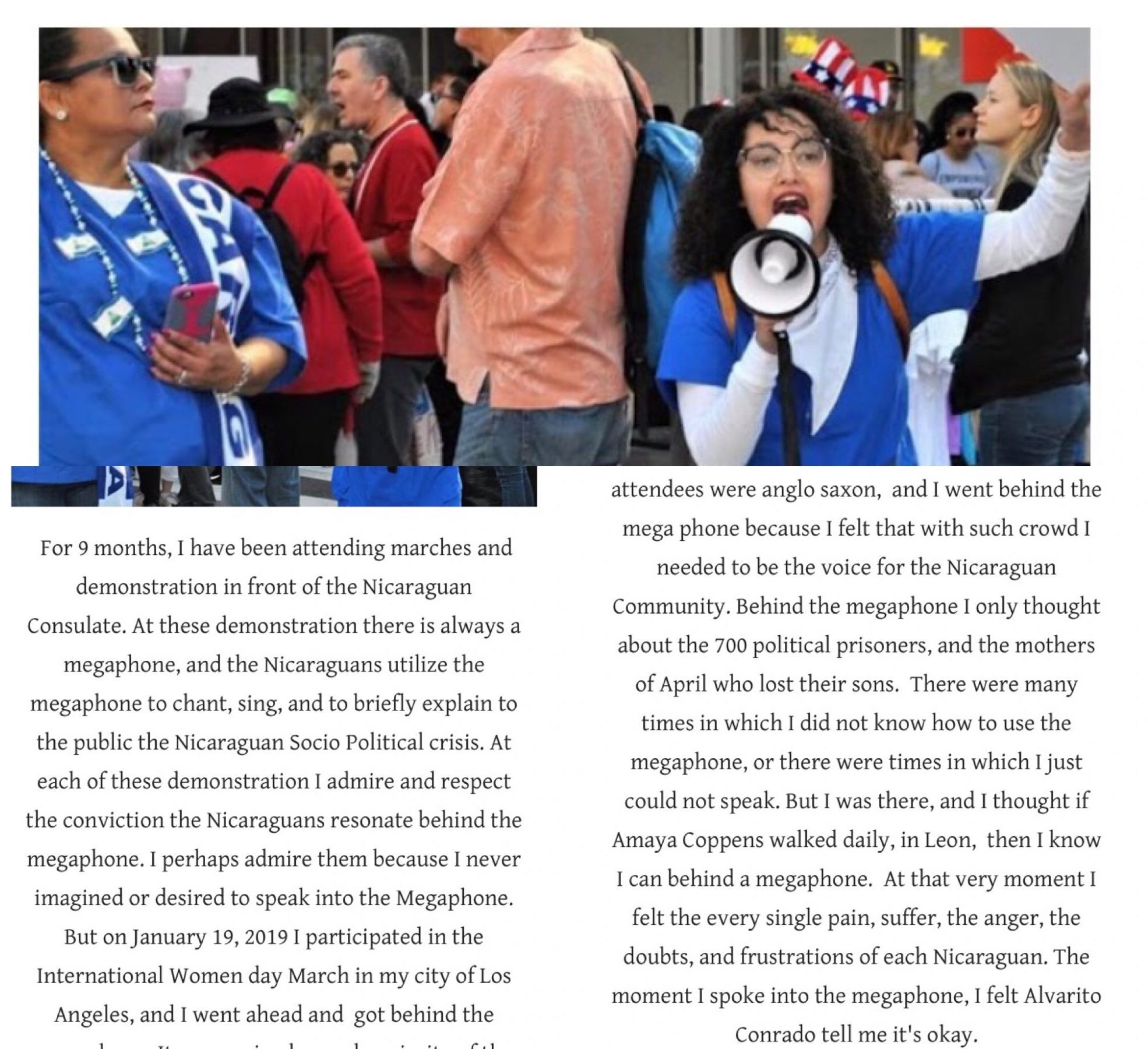 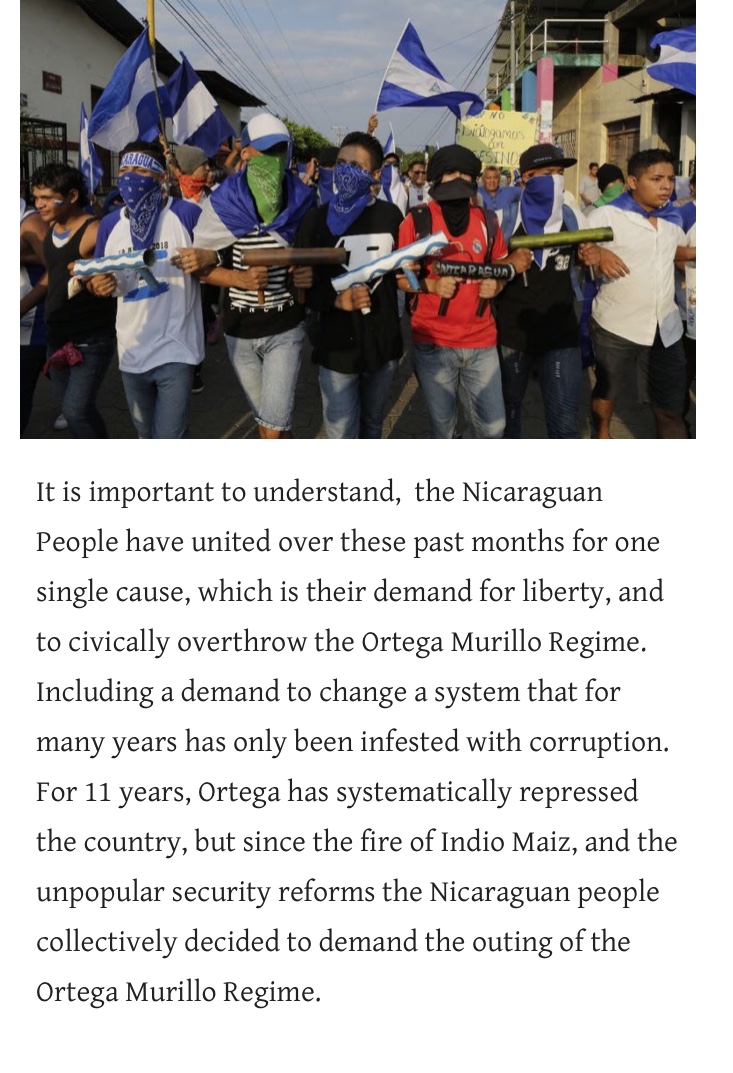 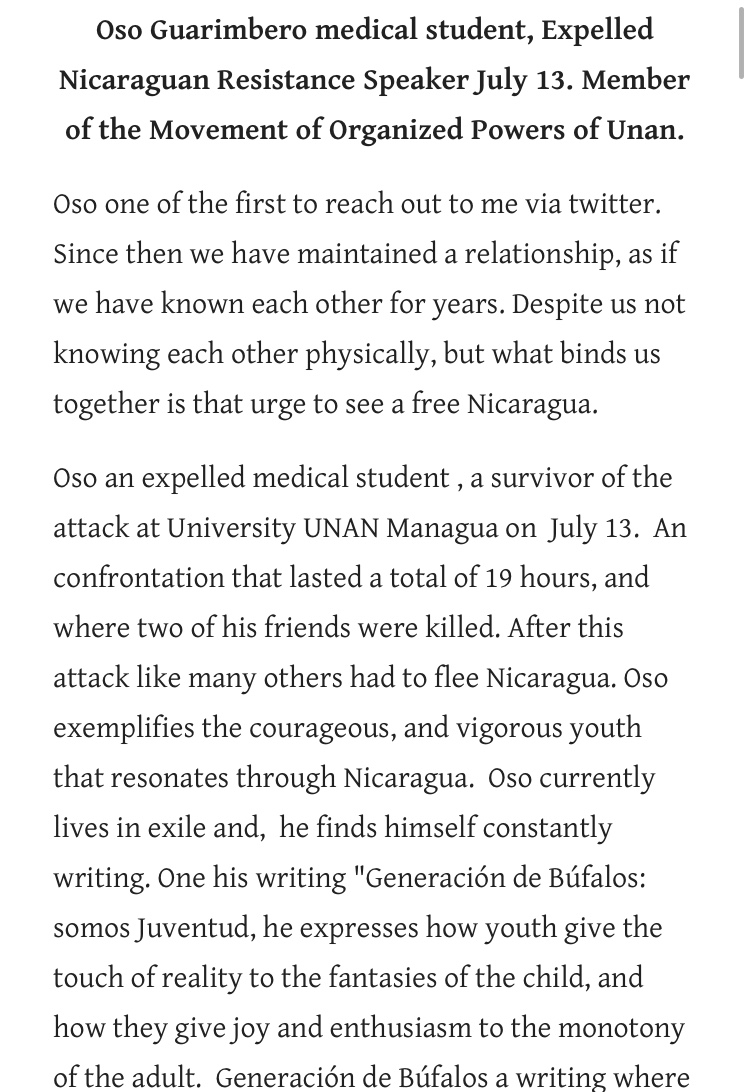 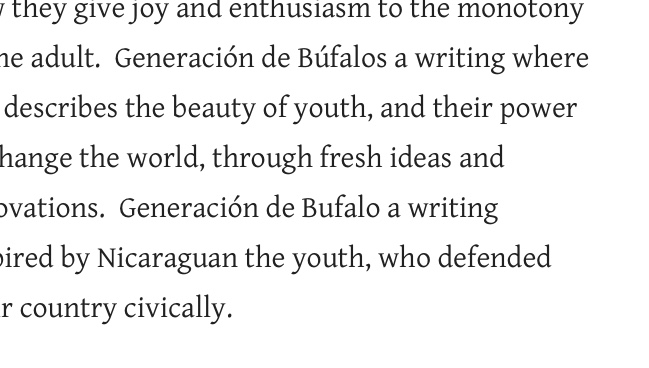 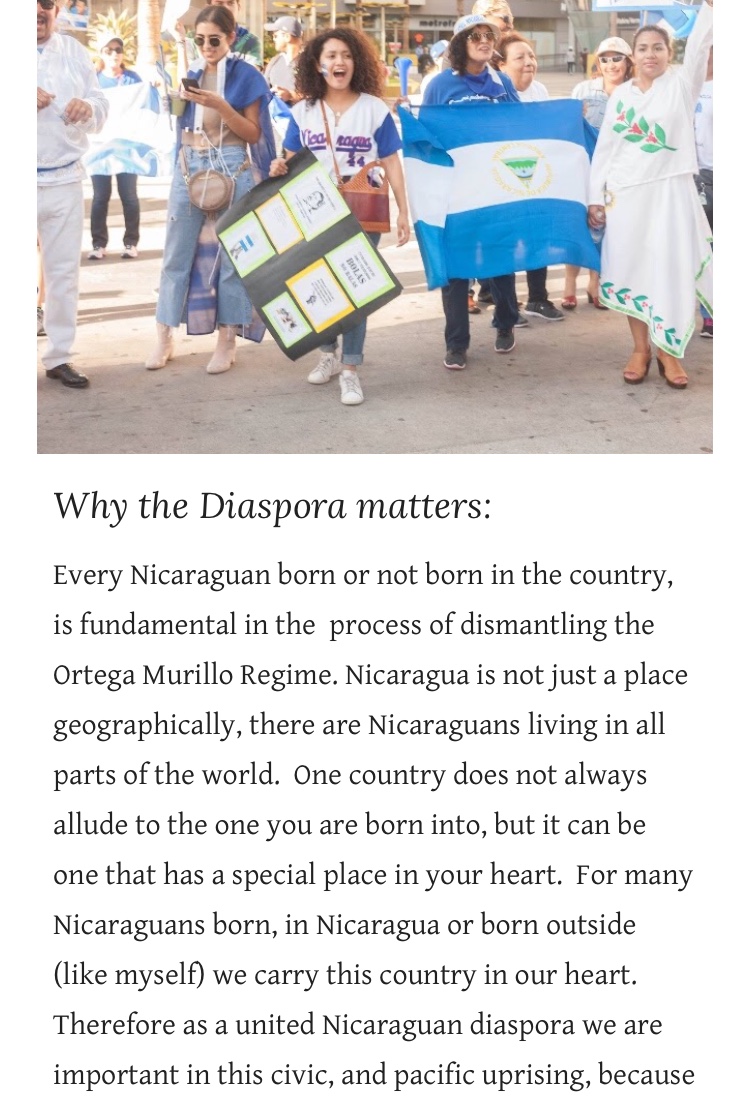 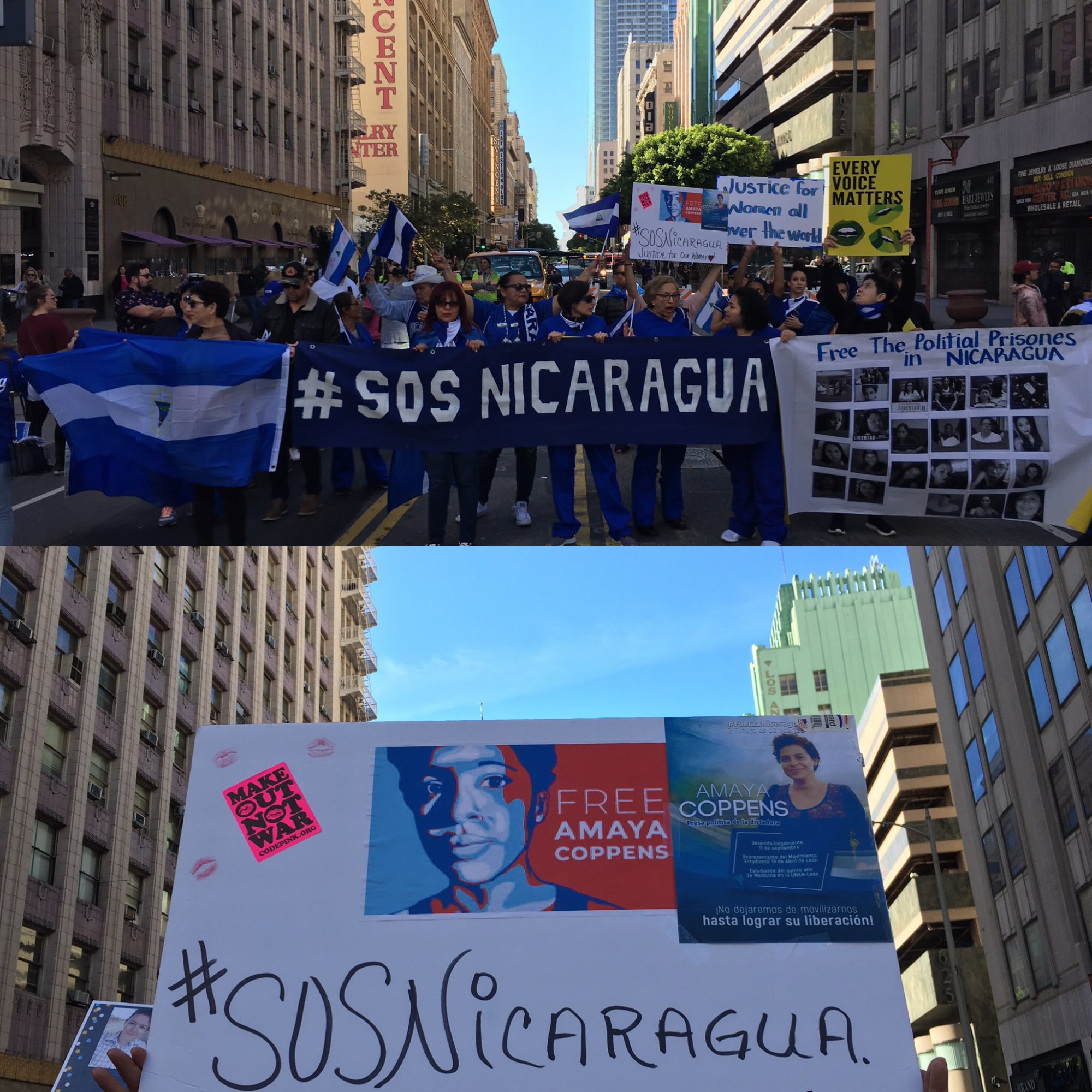 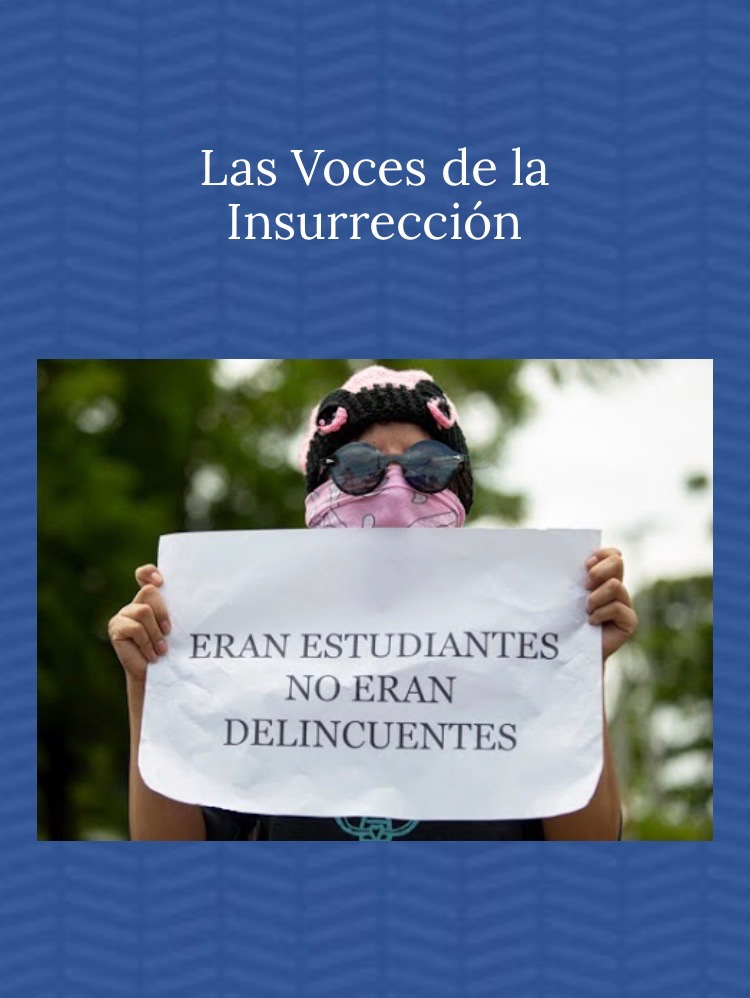 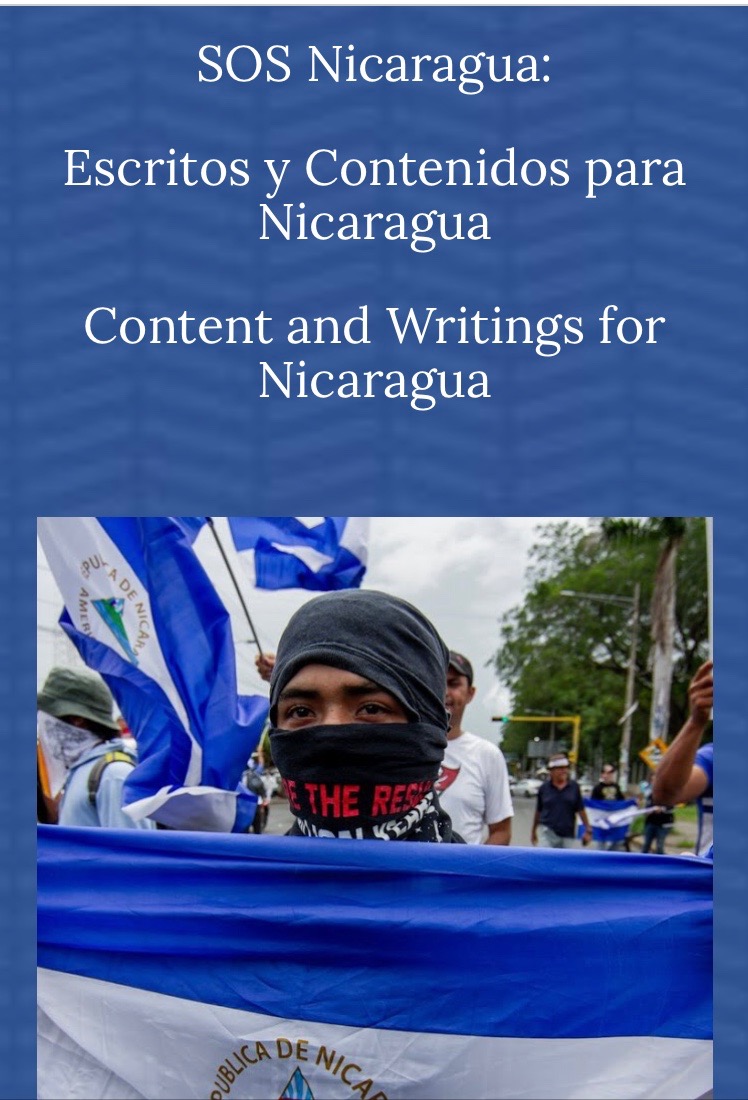