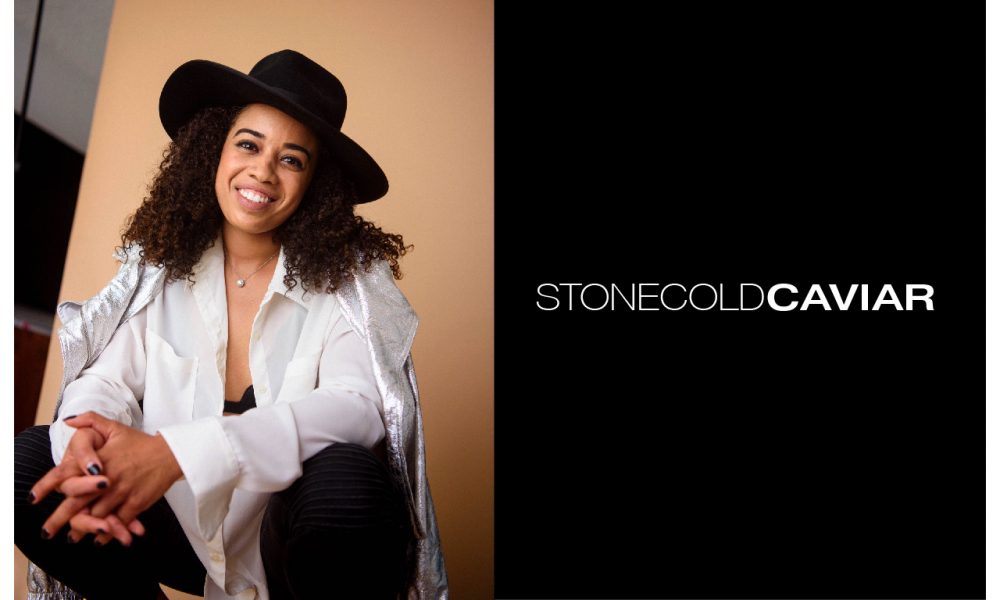 Today we’d like to introduce you to Alyse Stone.

Alyse, let’s start with your story. We’d love to hear how you got started and how the journey has been so far.
My journey as a visual artist starts with a failed disaster relief startup at 21 years old. I successfully competed in an international business competition, turned down big job opportunities, moved to LA, and left engineering school to pursue the venture.

After the startup, I wanted a career path that was unique to my interests as a creative mechanical engineer and was struggling to find it in corporate America. I closed the door and took a step back from the world to figure out what it was I wanted for my career. I was working a number of jobs trying to figure out what was next as I was battling post-startup depression. I took art coursework at UCLA, and for the first time, I felt inspired.

My professor encouraged me to explore my artistic curiosities. I painted and did ceramics when I was younger, but this was different. I engulfed myself in the art world. I studied the work of other artists and the cross-pollination of different mediums as I began to find my voice on the canvas. Fast forward to today: I have completed celebrity commissions for Grammy Award Winning Artists Lionel Richie and Jose Feliciano. I’ve exhibited my work at a museum, a stadium that seats 50,000, and galleries in LA and NYC.

I became a mechanical engineer so that I could have the tools to build and create anything I dreamed of. Picking up a paintbrush freed me to bring my creative fantasies to life. My mechanical engineering background fueled my art by allowing me to build functionally within each framework I painted. I started painting under an alias, Stone Cold Caviar and initially wanted to be completely anonymous. I wanted to see how far I could artistically push myself to take risks.

Stone Cold Caviar was the antithesis of my former life. As a Jackie Robinson scholar in university, I was fortunate enough to be exposed to top corporations and mentorship from affluent business leaders at a young age. Post graduation, I had to navigate what my voice looked like amidst what society “expected” of me.

Ultimately, the disappointment, anger, and sadness of my startup failing resulted in my rebirth. Rage led me to freedom. That freedom led me to the canvas. Acrylics, oils, spray paint, wood, and found objects began to aid my abstraction and visual understanding of the world I lived in. I destroyed the construct of who I had to be in order to achieve success. It was time to break out of society’s cage, and at that moment Stone Cold Caviar was born.

We’re always bombarded by how great it is to pursue your passion, etc. – but we’ve spoken with enough people to know that it’s not always easy. Overall, would you say things have been easy for you?
There have definitely been challenges. When I worked on the Lionel Richie piece, I considered sleeping in the studio because my work hours were nuts. I was driving all over the city, and had an insane commute. The road to where I am today was an uphill battle. I sacrificed and absorbed the opportunity cost like so many people pursuing a big goal or dream.

When you have student debt and bills to pay, it can be hard to rationalize taking a creative risk. My family certainly could not rationalize how I could turn down high paying jobs to take up bartending and pursue my aspirations. Looking back, I can understand why they were concerned, but I was passionate and believed in my abilities to see my vision through. I knew that if I maintained a committed work ethic and followed my gut, I could land on my feet.

So let’s switch gears a bit and go into the Stone Cold Caviar story. Tell us more about the business.
I currently work out of my home studio adjacent to Beverly Hills. I have two different styles of work: mixed media art that uses collage photography, which I have received commissions for, and my abstract pieces that use acrylic, spray paint, oil, and various mixed media. I have found a niche in storytelling for musicians and celebrities.

My first mixed media piece when I started was of the Victoria Secret Model, Chanel Iman. She shared it on her Instagram. Most recently, I’ve worked with Grammy Award Winning Musicians, Lionel Richie, and Jose Feliciano. I work with the client to decide which photograph they’d like to use, and then I work that imagery into my abstract process. With these pieces, I try to capture the essence of the person’s story or personality.

After four years of professionally painting, I am most proud of the work I’ve done with Lionel Richie and Jose Feliciano. I was sitting on a flight coming back from my art opening in NYC and met Helen Murphy, the former CFO of Warner Music Group. She texted later that week and asked me if I could be at Lionel Richie’s house at 7:30 PM and if I could bring some art. The Lionel Richie project opened up my world to the possibilities of where my art could go.

Has luck played a meaningful role in your life and business?
I don’t quite believe in luck. I do believe in being prepared for the chance opportunities that turn up. Meeting the former CFO of Warner Music on my flight did impact the trajectory of my art career. I am grateful and realize how fortunate I’ve been to have amazing opportunities come my way.

But, if I had not been prepared for those encounters, the positive outcomes would not have come to fruition. It is so important to put in the work ahead of time and do everything you can to get prepared and ready for your next step.

How do you, personally define success? What’s your criteria, the markers you’re looking out for, etc.?
Growing up in New York, I was surrounded by a rich history of art, music, and culture. I always admired seeing artists, dancers, musicians, producers, and creative directors (which I didn’t know at the time was a profession) owning their voice and work as they brought their visions to life. I say creativity is a muscle you have to build and train, similar to working out in the gym.

I measure my success based on my overall journey: am I pushing myself artistically; is the work a reflection of my unique voice; am I taking risks that make me uncomfortable? The Jose Feliciano commission was a project that pushed me creatively. It is a project that has meant so much to me as an artist but also as an African-American Latina.

Jose Feliciano was the first musician to stylize the Star Spangled Banner during the 1968 World Series in Detroit. Martin Luther King, Jr. had been assassinated in April of that year, and America was in a turbulent place as a country. Feliciano was the Colin Kaepernick of his time, as he received polarizing reactions for his version of the National Anthem.

His rendition was the first time the Star Spangled Banner made the Pop 100 Charts. He paved the way for others like Carlos Santana, Jennifer Lopez, and Jimi Hendrix, who famously performed the National Anthem in 1969. Hendrix called Feliciano “the greatest guitarist I’ve ever seen.”

Feliciano has been awarded over forty-five Gold and Platinum records, he has won nineteen Grammy nominations, earning nine Grammy Awards, including the LARAS Award for Lifetime Achievement. Jose is successful in my eyes not just because of his iconic work, but because of the message he achieved through his art.

My goal with the Feliciano piece was to try to capture the essence of his story while celebrating the historical moment. The work features a young Jose at his 1971 performance in Amsterdam. There are 51 rusted antique stars on the flag that are painted white. One star pays tribute to Puerto Rico, where Jose was born. The broken red and white lines on the flag reflect the division and tension that still brews in our country.

The bursts of paint and subtle color are a nod to the passion and energy that moved Jose to create the style of National Anthem that we have come to love today. The documentary about Jose Feliciano’s revolutionary accomplishments is slated to debut sometime next year. 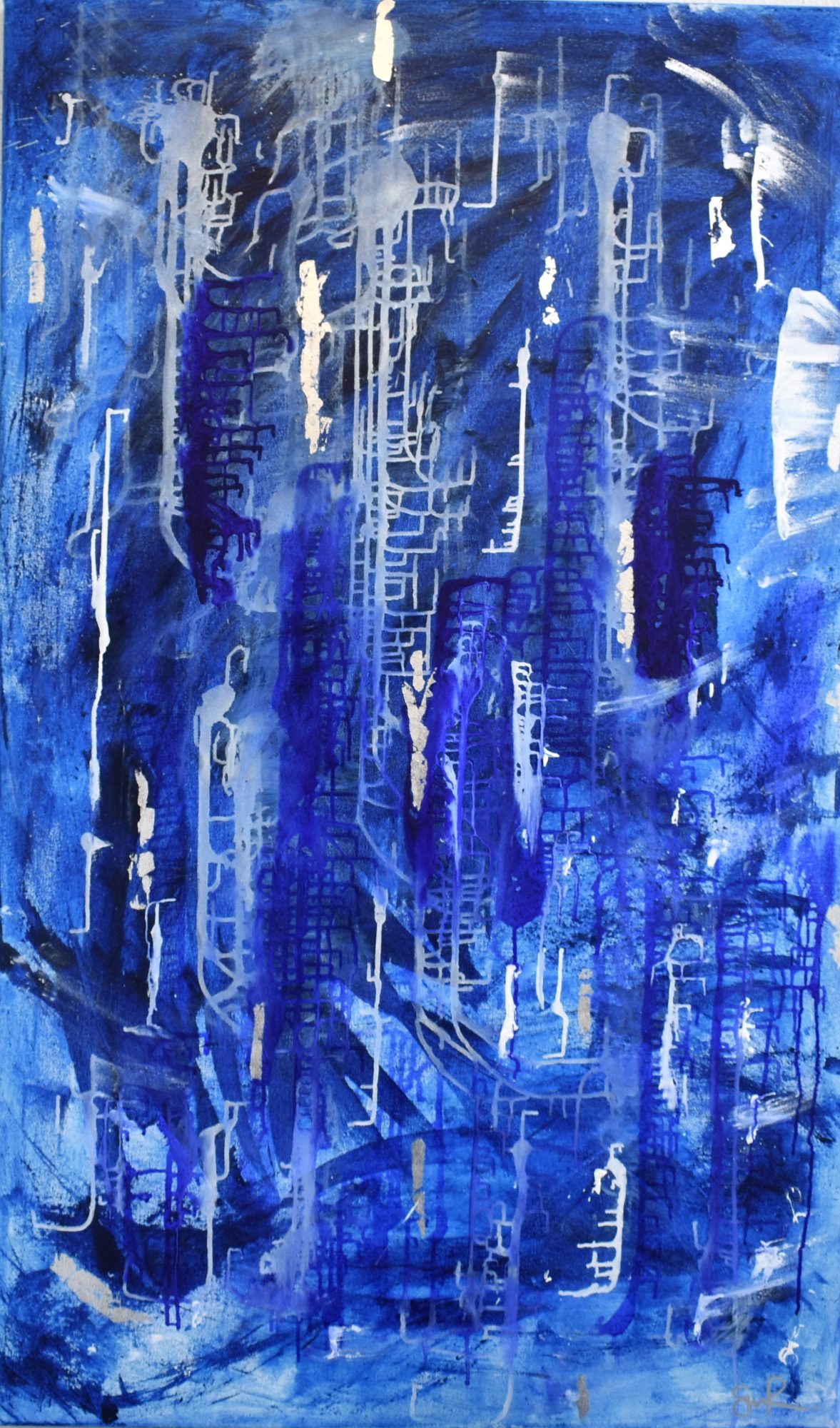 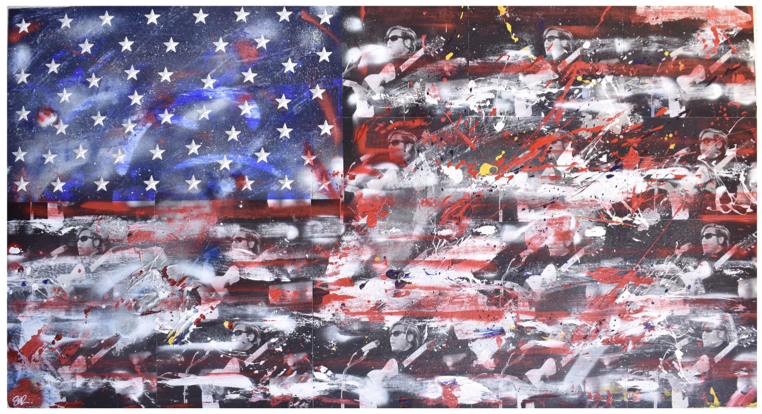 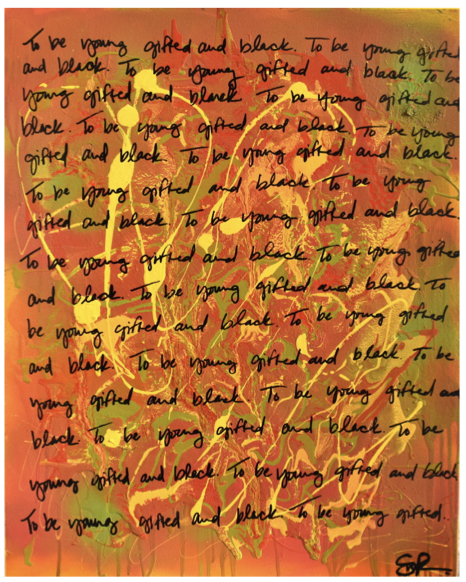 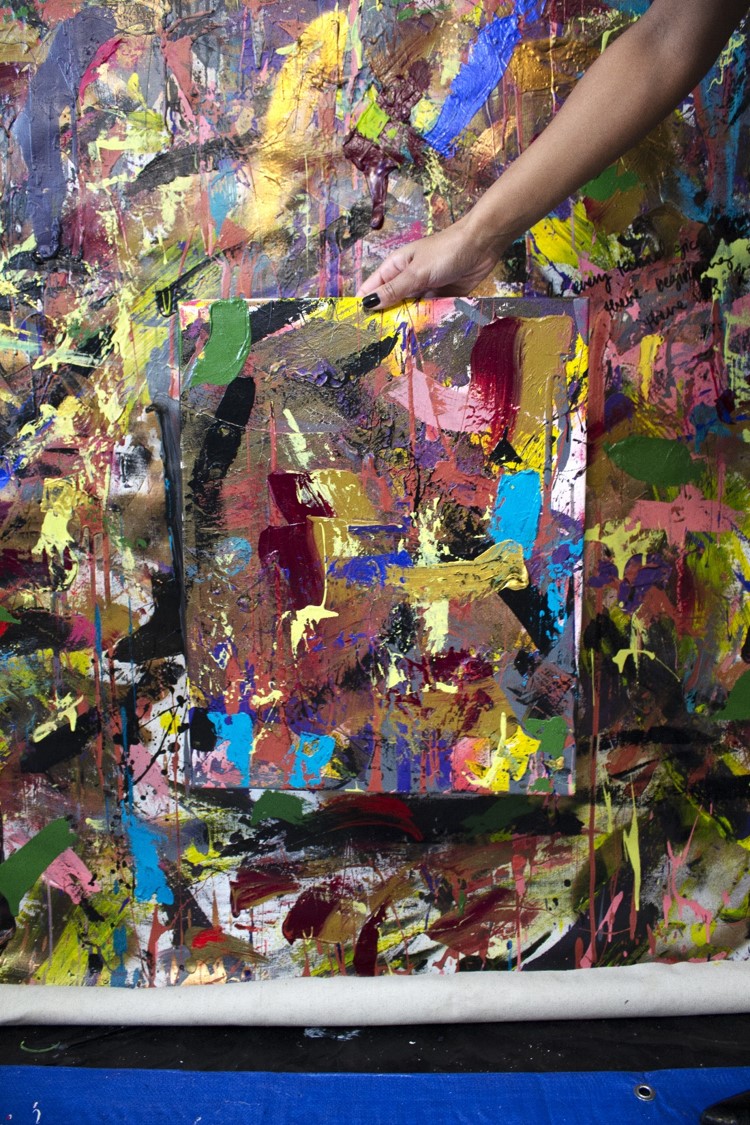 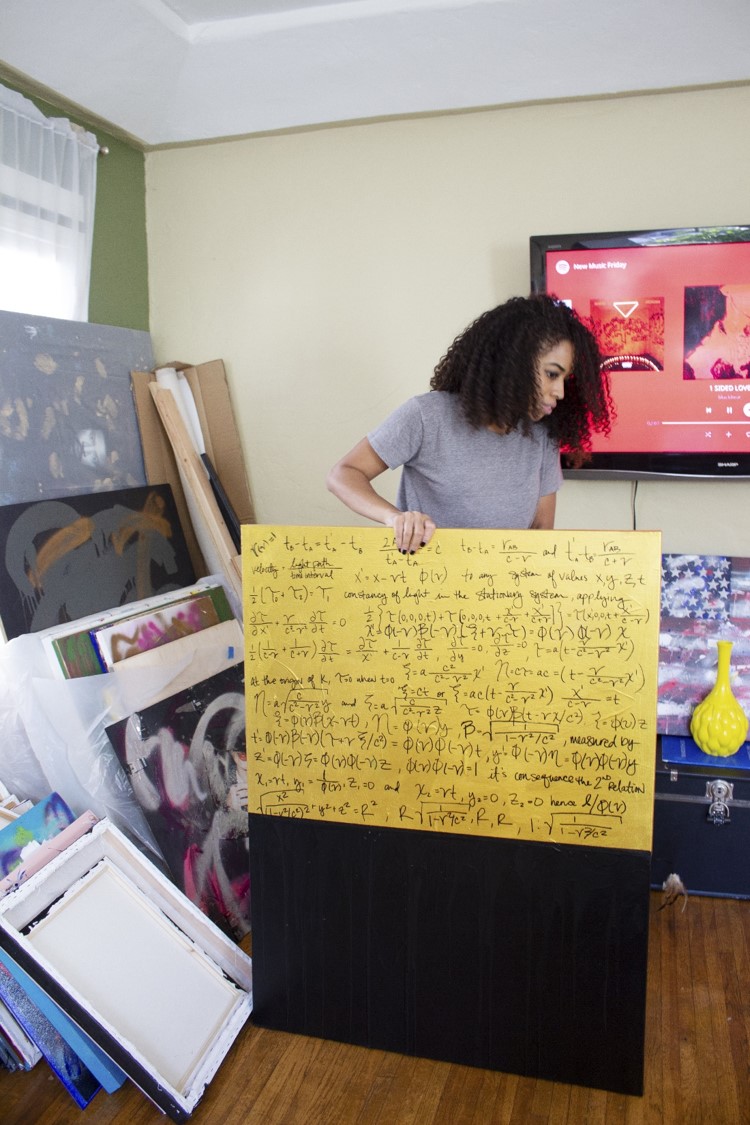 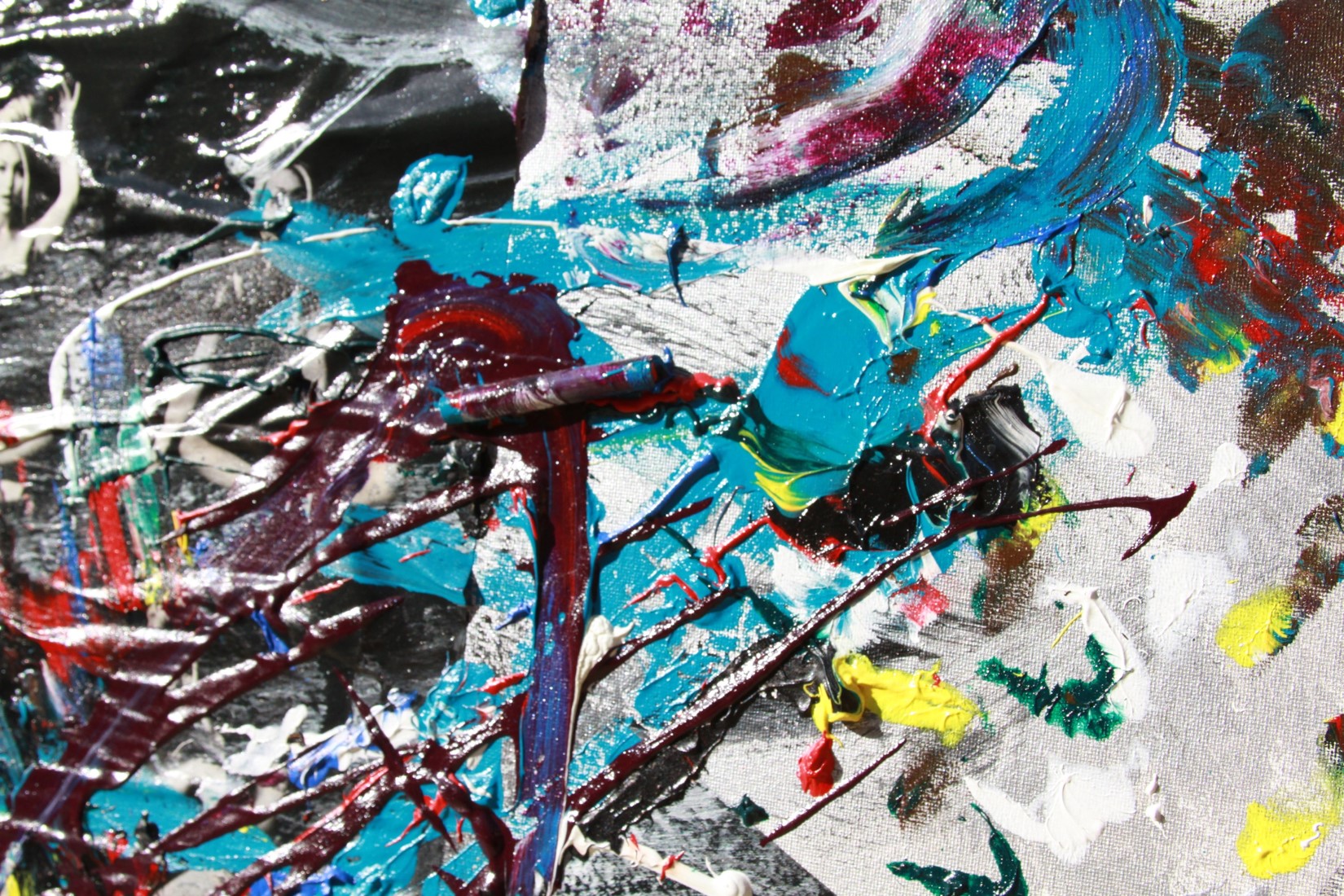 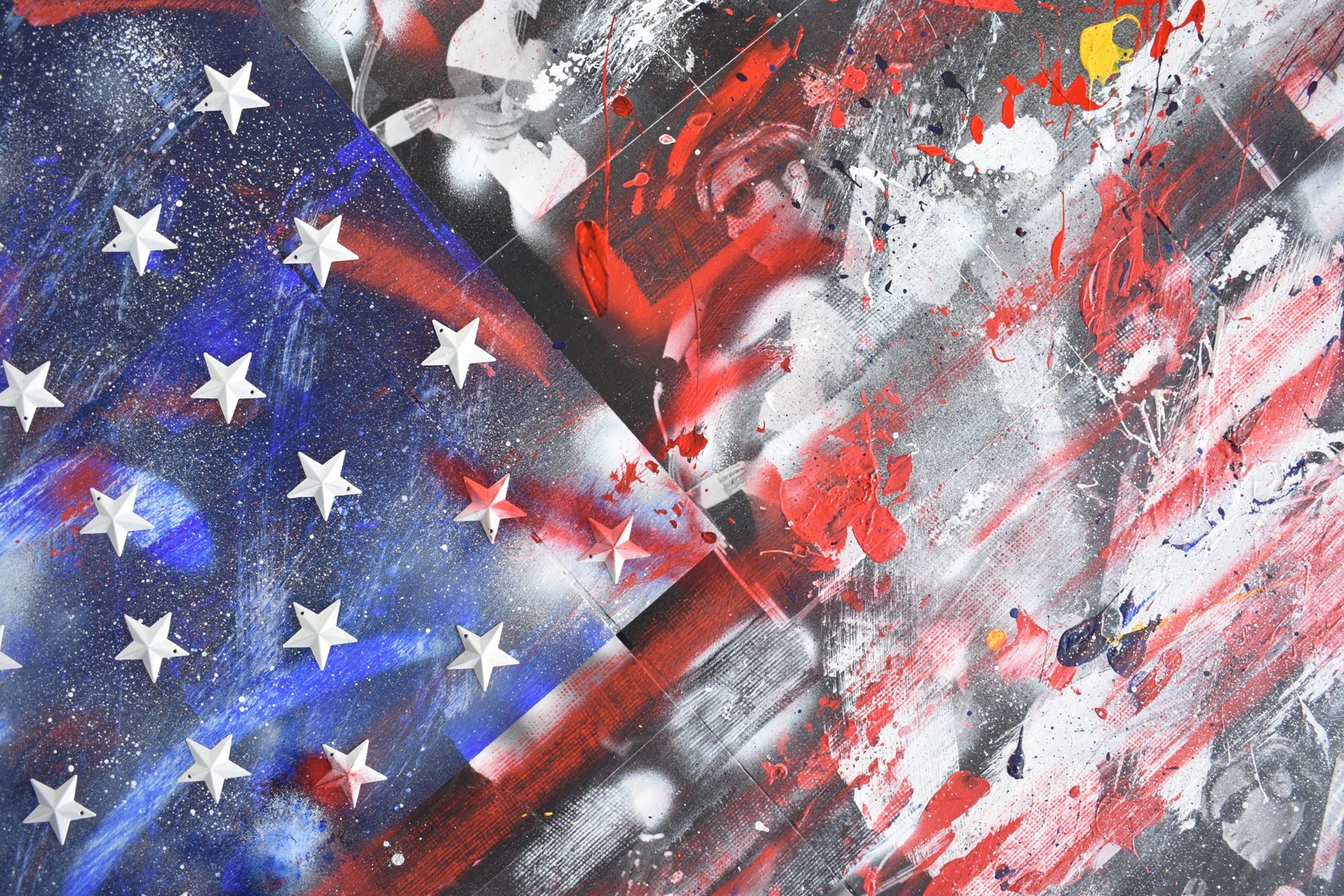