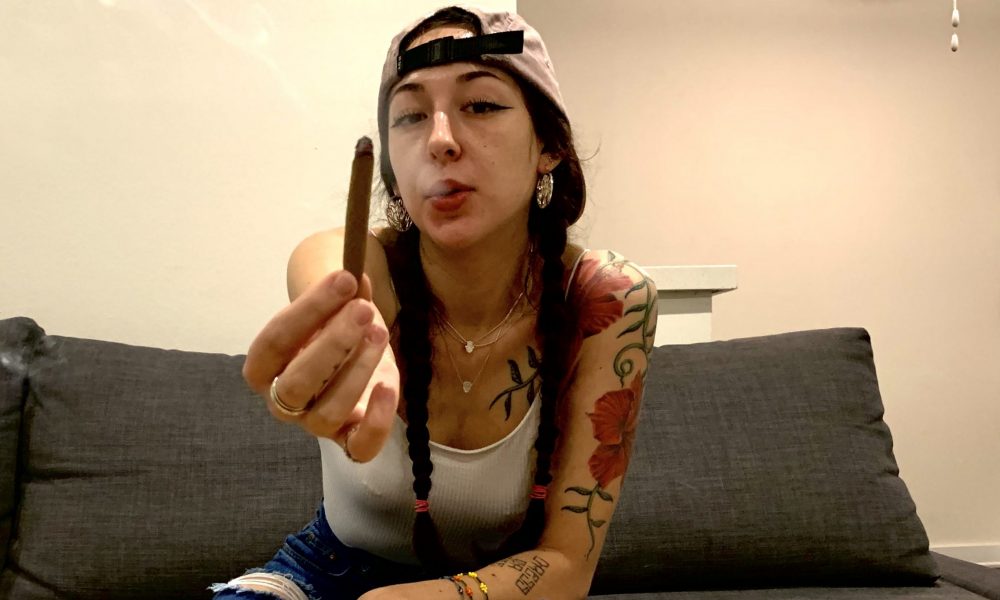 Alli, can you briefly walk us through your story – how you started and how you got to where you are today.
My story starts in northern California; I moved to Santa Rosa around mid-2014 and attended SRJC while working at Lagunitas Brewery in Petaluma. I’ve been sewing since I was nine years old, and really had a passion for it, but wasn’t sure where going down that path could take me. But after I took a clothing construction class, I decided to switch from a business major to a fashion major. After a couple of years, I received a degree and certificate in fashion design, then Lagunitas was basically like, “Hey, we’re opening a taproom in SoCal, you wanna go? We’ll pay for it”. I was considering relocating to either San Francisco or Los Angeles already, to be closer to the streetwear industry, so this felt like a golden opportunity. I said fuck yeah, I packed my shit and moved down here.

Before moving here, I had only visited one time for three or four days so transitioning was kind of weird. I didn’t know anyone, my coworkers were brand new to me, and the only friends I had lived over an hour away with clashing schedules. So basically, I was hella lonely and bored with plenty of time to plot my up-and-coming streetwear brand. After a year, I got laid off, had a quick quarter life crisis, then eventually started selling weed in a shop. During this time, I saved enough cash to buy a new laptop so I could start working on photoshop and graphic designs for my line. (Looking back, getting laid-off was definitely a blessing in disguise.) The plotting continues through the end of the year and then January 2019 GRINDHOUSEWOMEN.com officially went live.

Since that day, I’ve been filling any free time I have with planning photo and video shoots, trying to learn graphic design and video/photo editing, and trying to come up with new cut-n-sew ideas. I’m very thankful to have worked for the breweries and dispensaries I worked for because not only did they literally help get me where I am today, but they have consistently provided me with some of the best people to network and build beautiful friendships with. Most of the models in my photos and videos are former classmates and coworkers who just want to help out.

We’re always bombarded by how great it is to pursue your passion, etc – but we’ve spoken with enough people to know that it’s not always easy. Overall, would you say things have been easy for you?
There are undeniably all kinds of bumps in the road, not everything is as easy as you’d think. I had a printer fuck up an entire batch of T-shirts one time which set me back a good chunk of money. Luckily that’s only happened once so far. From that, I learned to be way more specific when meeting with my now regular printer. You don’t realize how expensive everything is until you’re trying to fund everything out of your own pockets. Every little thing cost money from the sew-in tags to the packaging supplies like tissue paper, weatherproof bags, etc. Plus, the free stickers included with every purchase. Every L is a lesson though, I’d get bored if this shit was easy.

Please tell us about GRINDHOUSE WOMEN.
GRINDHOUSE WOMEN is a women’s streetwear company constantly gaining inspiration from [grindhouse] films and consistently driven by dope girls. We create streetwear specifically for women due to the fact that men’s streetwear has been prominent in the game for a long time and women has been lagging. We’re known for our aggressively feminine attitude and stoner vibe but there’s so much more we have to offer. So far, we’re most proud of the feedback we’ve received on our products. Most of our T-shirts and hoodies are made from combed and ring-spun cotton for a soft, comfortable fit that we hope to build a reputation for. Once or twice a year, we release a T-shirt inspired by one of our favorite classic films, some with a fun little twist to the original story behind it. What sets us apart from the rest is our assertive approach and our distinctive sizing. Our T-shirts come in two main styles “Fitted” and “Ill Fitted”. The “Fitted” style is going to be more fitted to your curves whereas the “Ill Fitted” is going to be a boxy, baggier fit.

What were you like growing up?
Growing up, I was a little weird. I was very girly in my younger days, a lot of cheetah prints, pinks, and high heels, but I was a tomboy at the same time. I’d be outside playing in mud puddles, riding bikes with the boiz, while in my cheetah print tops and high heels. I was hella shy, had high-anxiety, and was always crew oriented. I was rarely down to be alone at recess. I’ve been a video game nerd since the single digits, team PlayStation. My dad put me on to all the good shit like Grand Theft Auto, Call of Duty, Tomb Raider, Crash Bandicoot. I didn’t start getting stylish until I was a little older, but my style was always kind of girly-tomboy. I was a cheerleader throughout high school, but also hung out with the skaters because we had similar styles and all listened to underground Bay music.

Throughout my life, rap and hip-hop have been my main music of choice, and I’ve always had a love for horror movies. Since I can remember, my sister and I would put on a movie, or play a video game, and turn up a good playlist really loud over the TV while we smoked just for the obnoxious entertainment. Today this is the work environment I prefer and can’t get too much done sitting in a quiet room. Hence the name GRINDHOUSE. If my bedroom door is rattling from the bass spilling out of my stereo overlapping the blood curling screams from a horror movie playing, don’t bother me, I’m working. 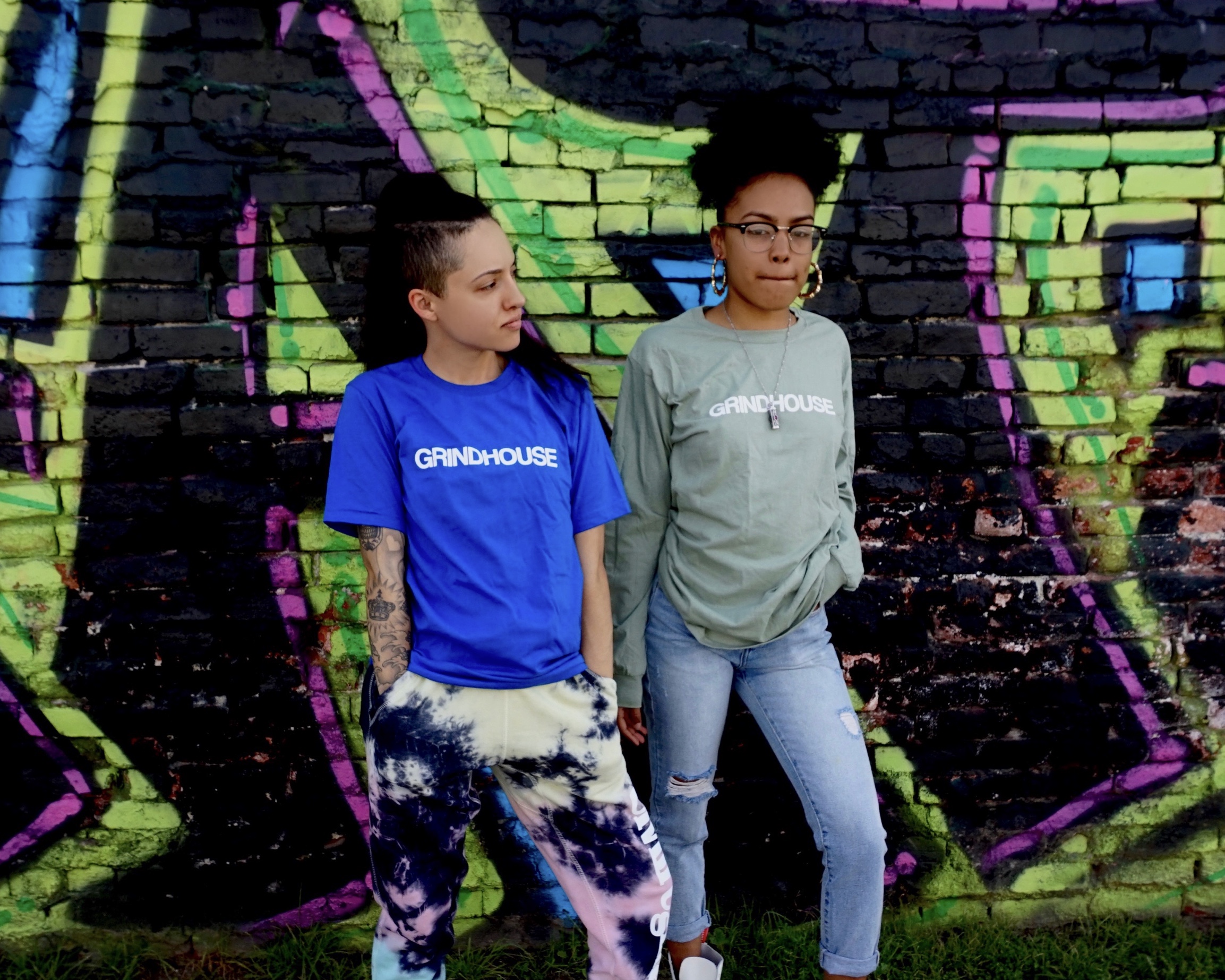 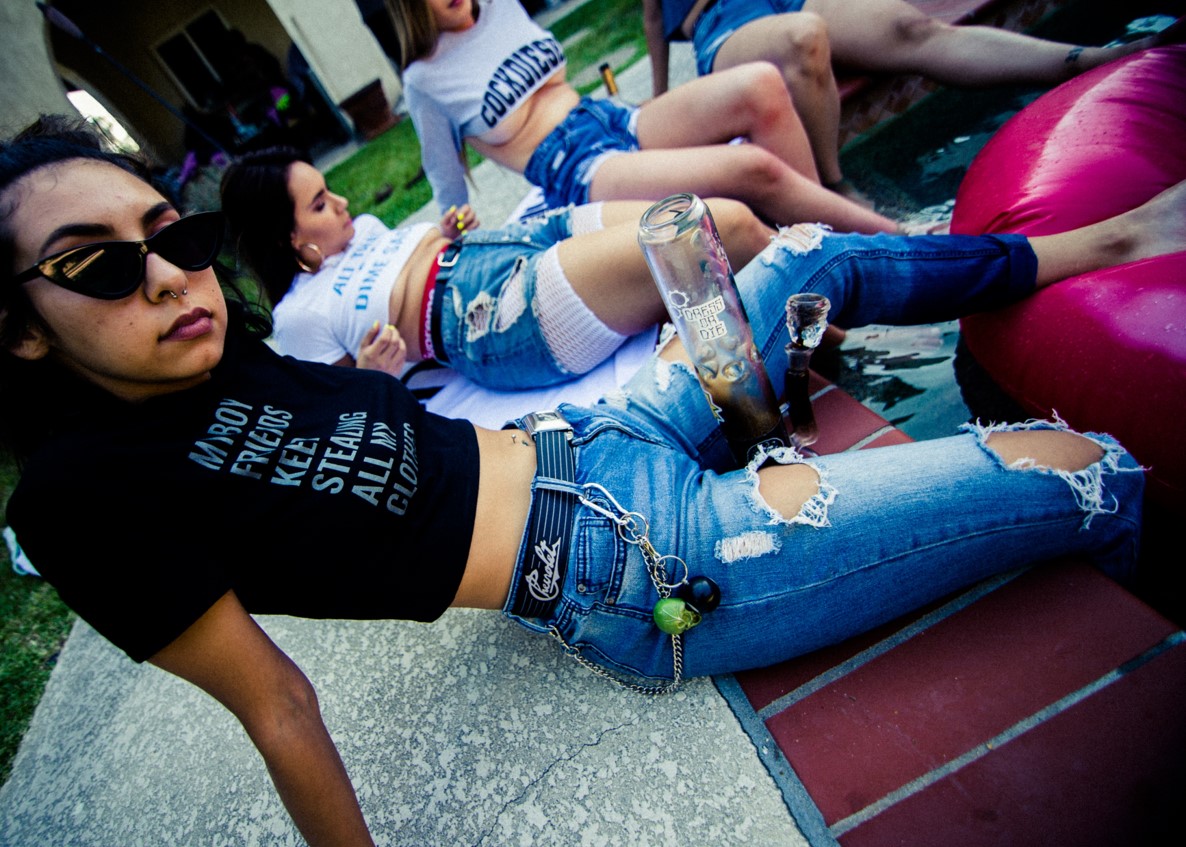 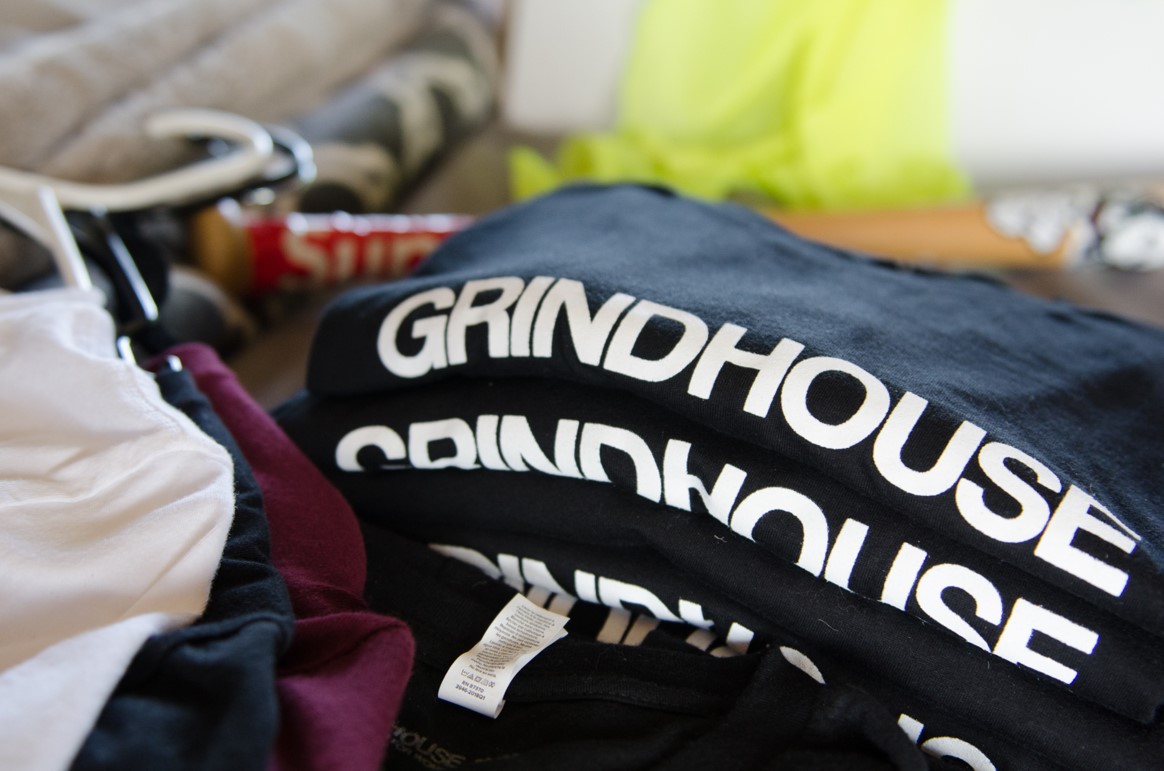 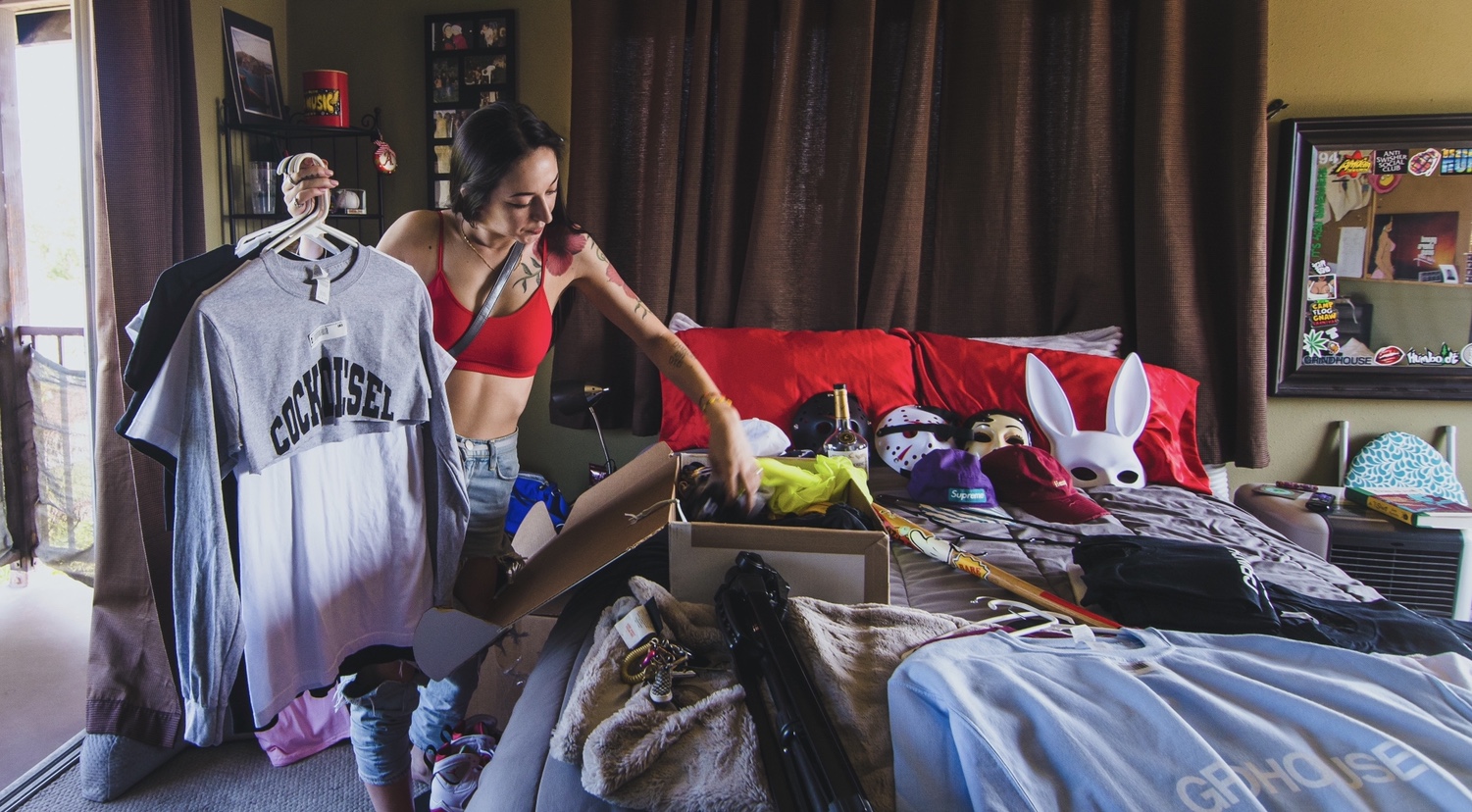 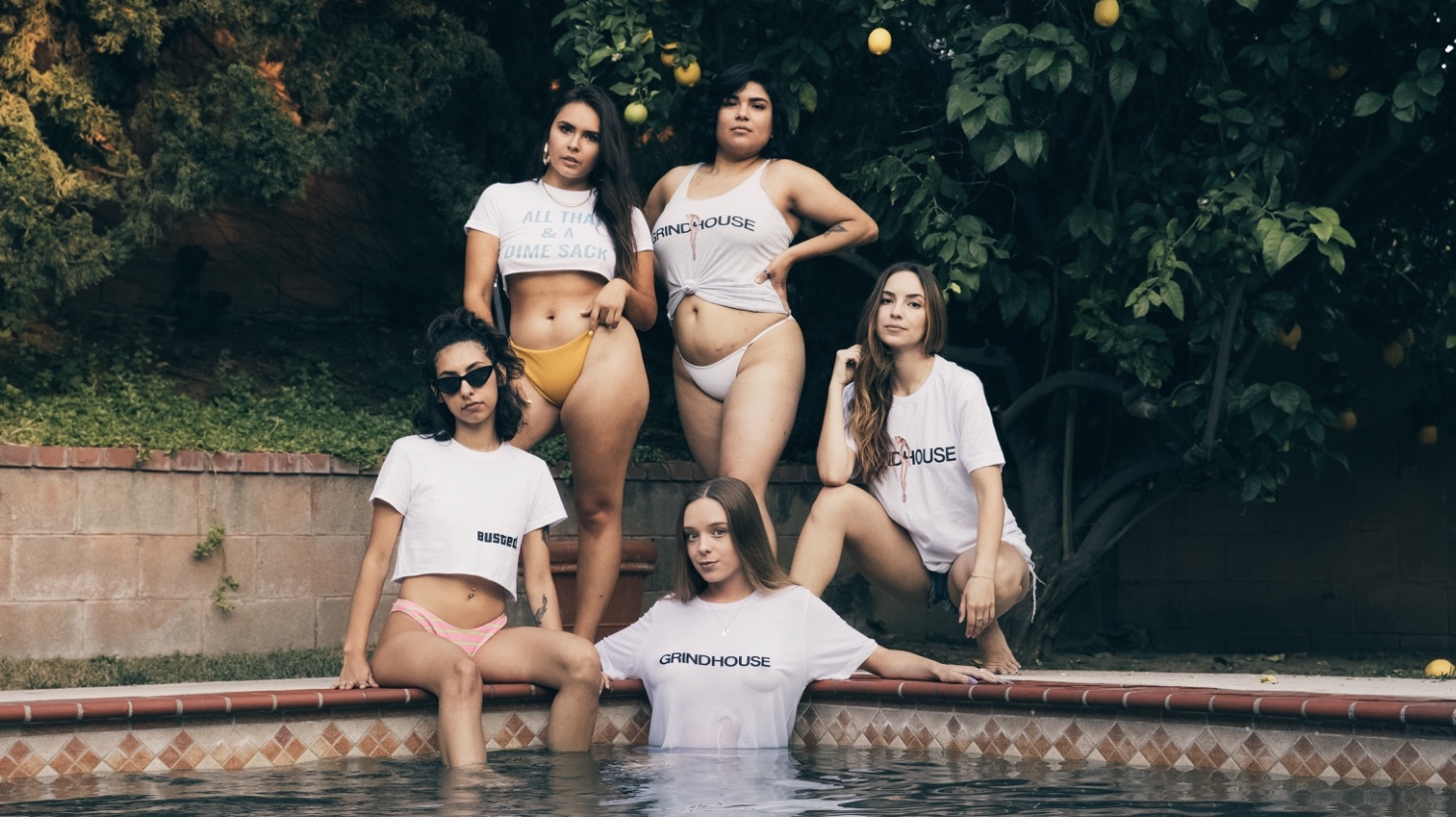 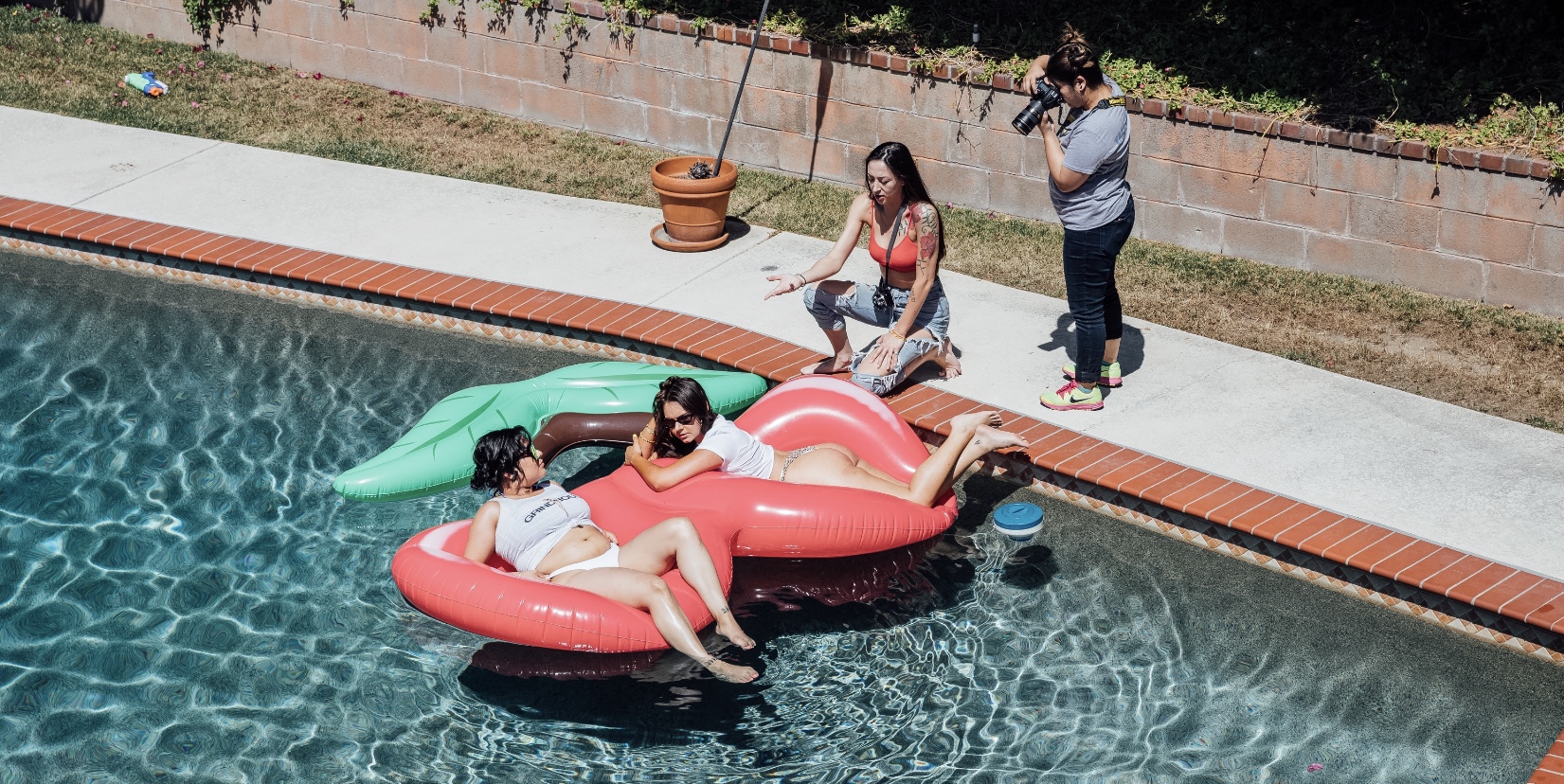 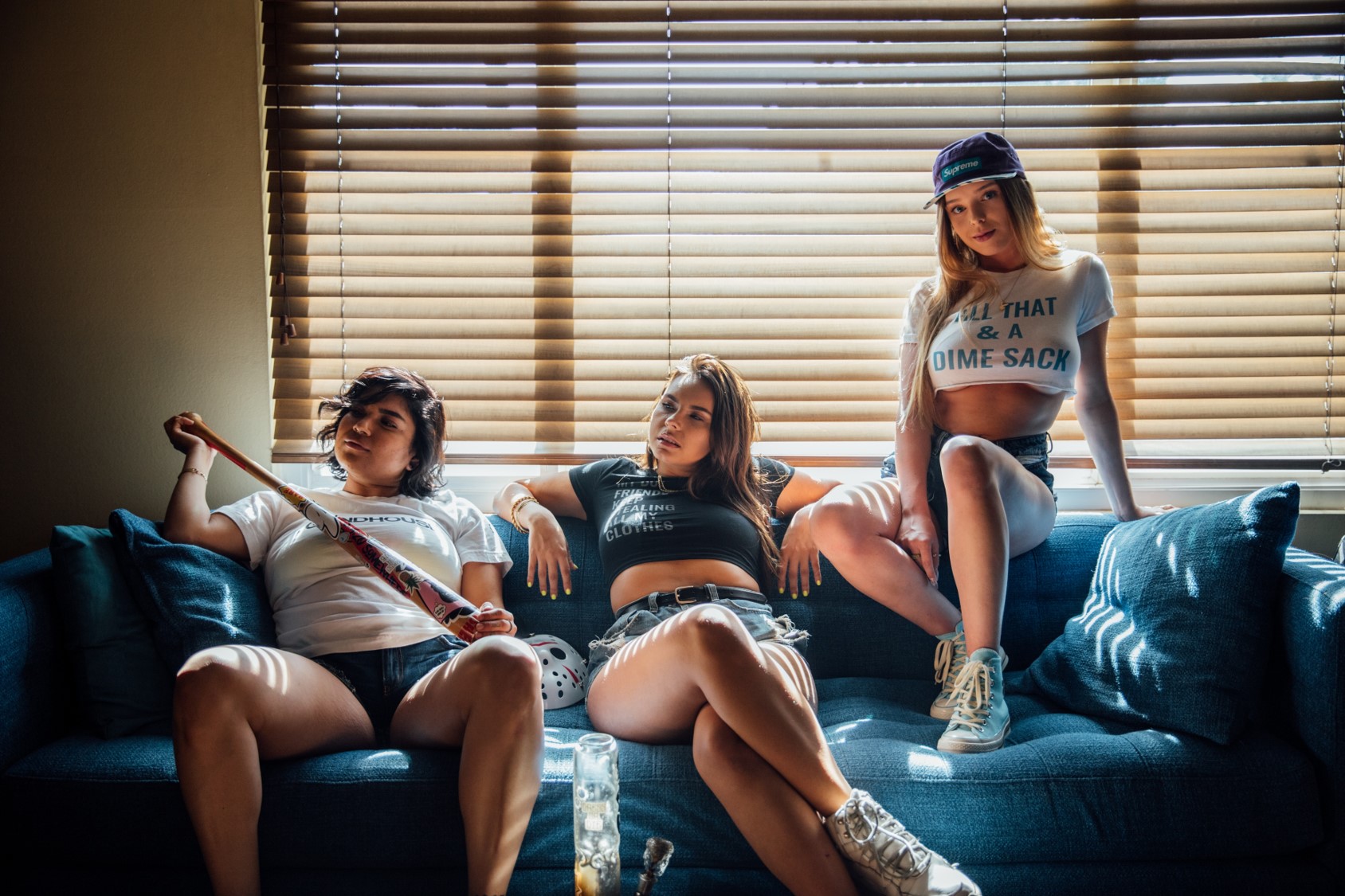