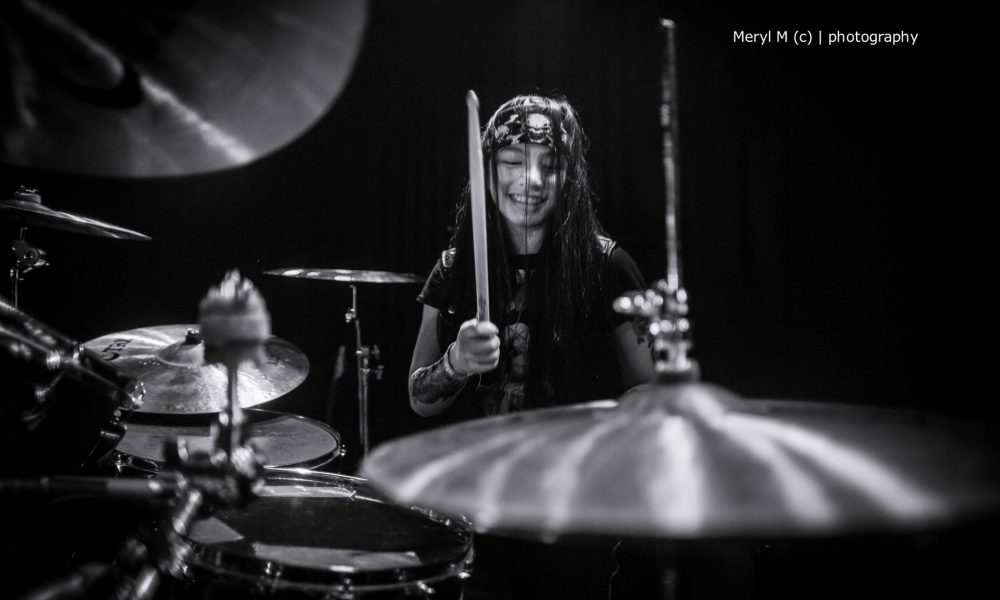 Today we’d like to introduce you to Alexey Poblete.

Alexey, let’s start with your story. We’d love to hear how you got started and how the journey has been so far.
First of all, I am a girl drummer! I grew up listening to classic rock legends such as Led Zeppelin, Rush, Kiss, Deep Purple, Motley Crue, Queen, and much more. I fell in love with drumming when I was five years old after watching a children’s TV show about music. My start is quite a long story. I basically pestered my parents to allow me to become a drummer continuously for more than a year. They always told me that I couldn’t become a drummer because I was young, small and that I was a girl. They tried getting me on violin or piano but my heart stayed with drums. I was nearly seven years old when they finally gave in. However, with that, I had to promise that I would join the local drum competition if they got me a drum set. So, at the age of seven, I joined the drum competition with only six months of learning drums and ended up winning first place.

Since then, I was able to perform on stage alongside Stevie Wonder and Pattie LaBelle when I was eight, and thus branching off to guest for many local bands in Vegas and in L.A. Then, at the age of ten, I competed and was crowned the very first under eighteen champion of the international female drummer competition Hit Like A Girl. Some of my biggest experiences include playing for and being featured in Ellen DeGeneres’ girl empowerment campaign with GAP Kids, touring in the Philippines and around the states, sharing the stage with Arnel Pineda of Journey, performing at the halftime show of the LA Clippers and Golden State Warriors 2018 game at the Staples Center, performing on several news channels including the TODAY Show, and playing at the U.S. Tennis open 2017. I was also given the opportunity to feature in other projects including Apple’s iPhone XS commercial, Disney’s Dream Big Commercial of 2017, Nickelodeon’s “That’s Me” campaign 2018 and many more.

Overall, has it been relatively smooth? If not, what were some of the struggles along the way?
The music business or the entertainment business, in general, is rarely a smooth road to take on. It’s a rough path, in which you can’t exactly see the destination or the end of it. On top of that, there are no signs to guide you where to go. It’s all about instinct and past experience that allows you to make the choice of where to go next. Because I started music at a young age, most of my life is revolved around just that. There are many times where I felt I couldn’t fit in with the outside world because I don’t know what school is like (I’m homeschooled) or how other kids my age act. I couldn’t befriend other kids because they couldn’t understand my lifestyle. So, it was during those times where I felt most out of place, unable to call myself normal because I couldn’t relate to other children my age. I lost a lot of confidence and self-esteem because of that. I felt isolated and stuck, constantly wondering if I was even capable of chasing my dreams. I had that mentality for a while and I still do at times, but besides feeling lost and unsure, I also have times where I get truly frustrated with myself and who I am as a person.

My rather large self-doubt and discouragement is a huge personality trait of mine. I can name all the times I remember beating myself up and doubting my own worth because I never felt good enough. I couldn’t ever watch my own videos because I couldn’t even bear to watch myself. I was never satisfied with my performances or just in general. That way of thinking had applied to almost every other thing I did or was outside of drumming. I was also a shy, quiet kid growing up and for some reason, I was constantly trying to change that. All that being said, I was quite scared and embarrassed about myself for a while. However, I’ve grown to love who I am even when I go through those setbacks. I’ve become grateful for my past struggles because I’ve become who I am today. I feel empowered, proud, and happy when I am on stage performing behind the drums no matter how different I may be or appear to others. Even if I questioned my place in life and what path I was taking, I always stuck with music because I loved it most. Yes, this lifestyle is a tough and large competition but even if it isn’t rainbows and sunshine, music was and is my life and I love it that way.

ALEXEY – what should we know? What do you guys do best? What sets you apart from the competition?
I’m a 15-year-old female drummer, model, and actress! I play all genres but I love playing classic rock and heavy metal. I am currently in three bands based in L.A. and in Vegas. I am the drummer for the Filipino Thrash Metal band Antitrust and an anime cover band called Midnight Shinigami. I am also the touring/ session drummer for teenage pop group Saving Forever.

What is “success” or “successful” for you?
I used to think success, the outcome of one’s effort, came in the form of mansions, fancy cars, and anything flashy. If you ask me now, I believe success is true happiness. Life is supposed to be lived to one’s fullest and satisfaction. When you can look at yourself and feel proud of where you’re at and who you are, I think that’s what the feeling is when I hear the word “success.” That being said, I think that when you’re in a spot in life where you couldn’t ask for anything more, that’s success. 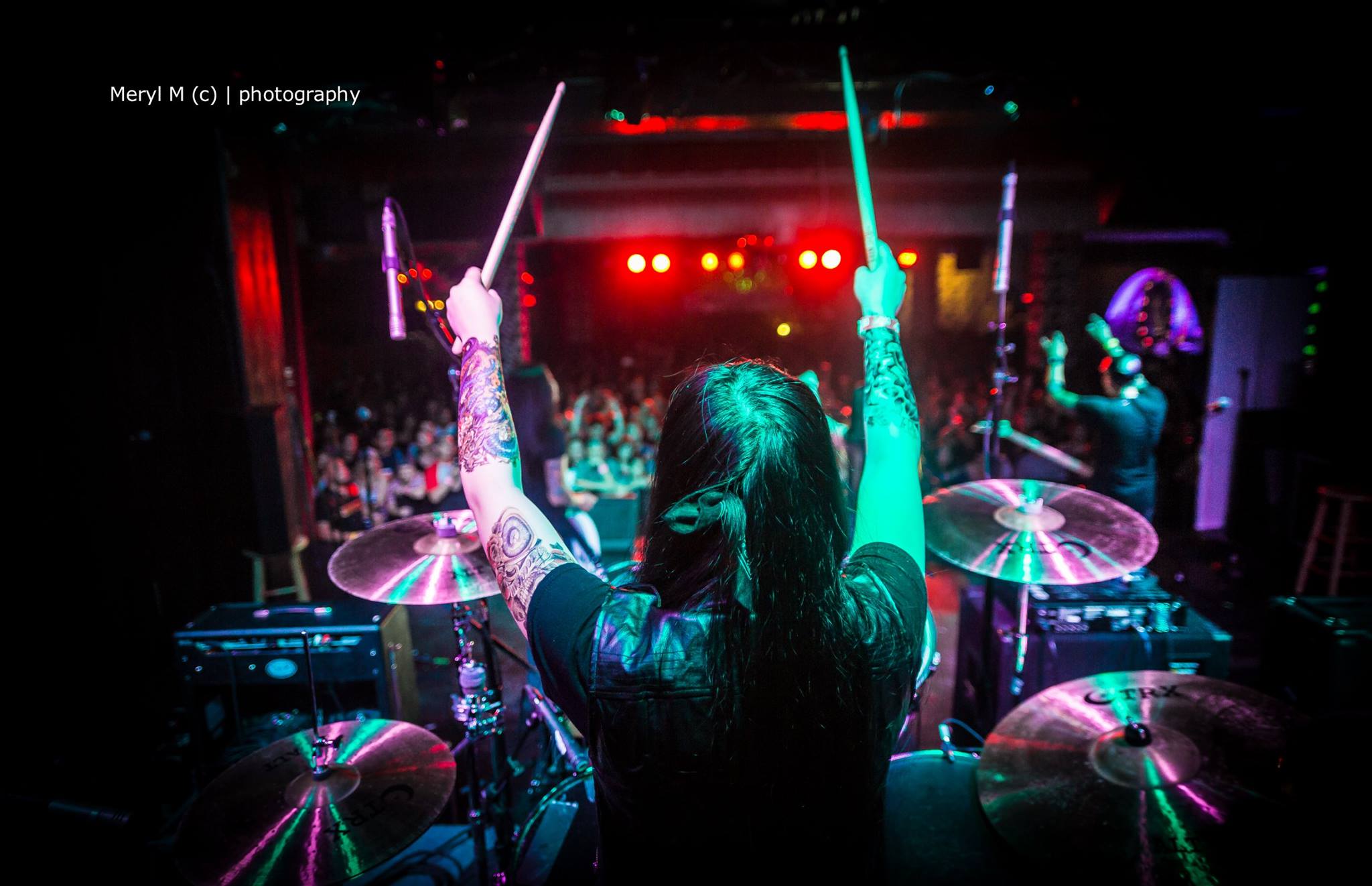 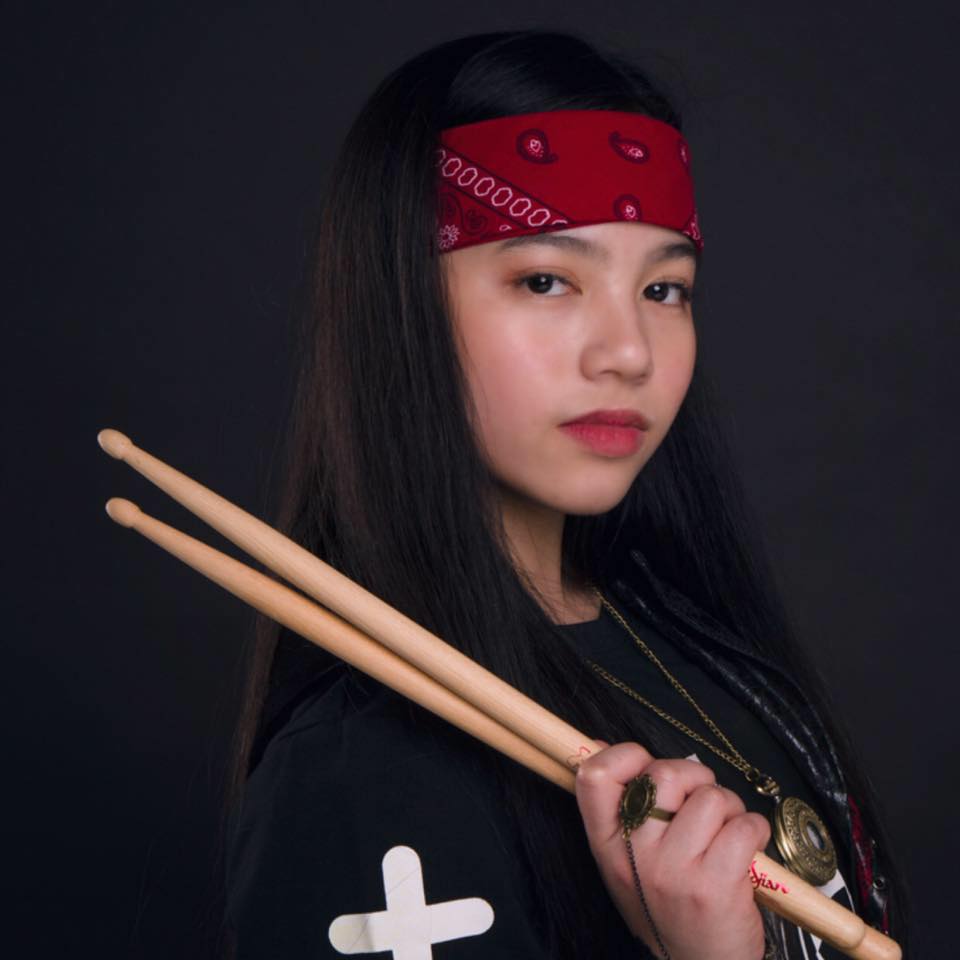 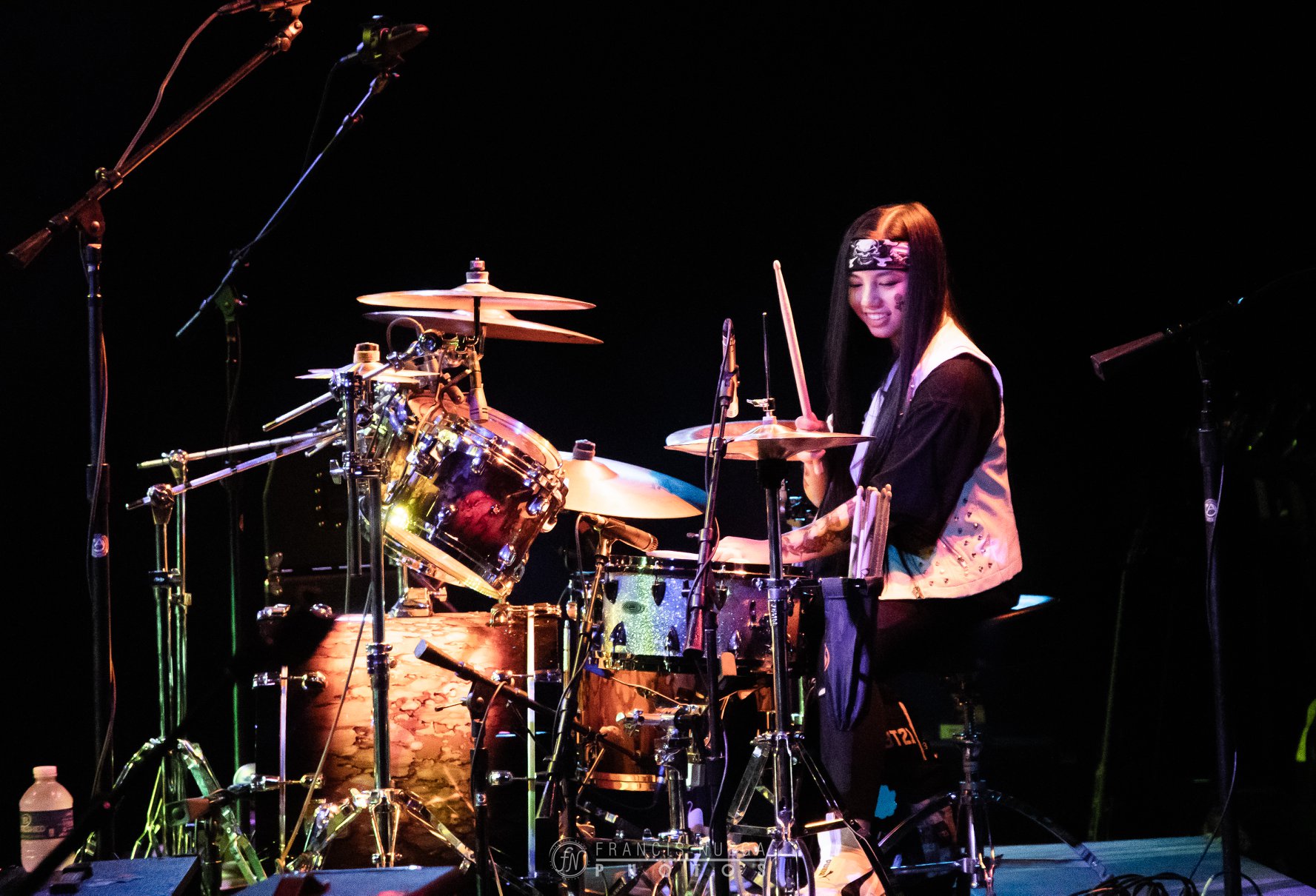 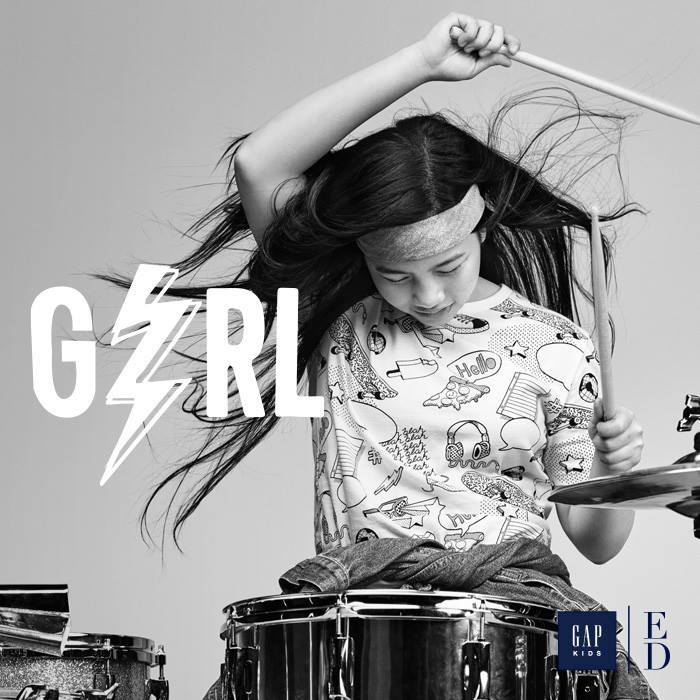 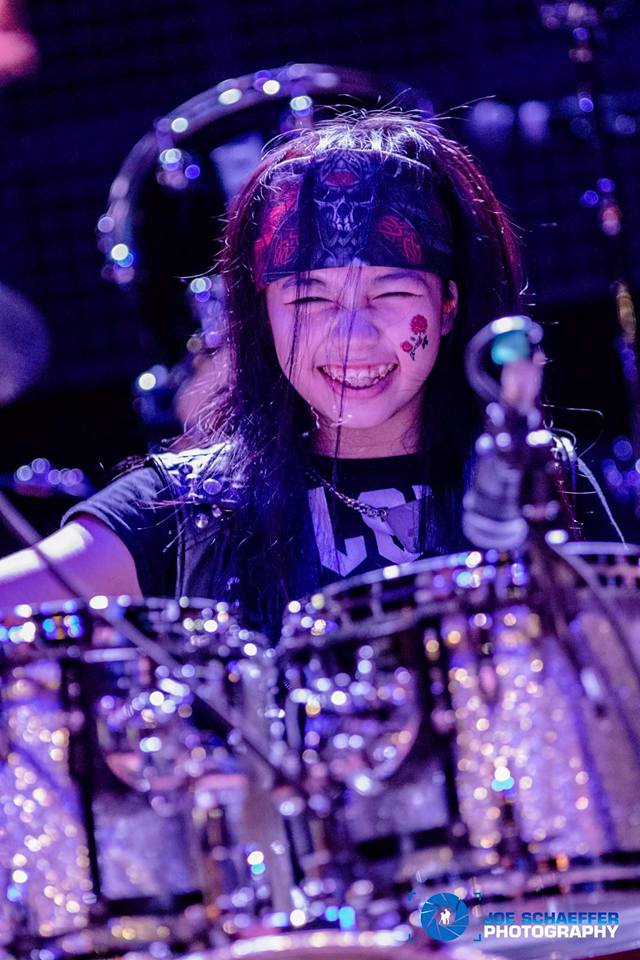 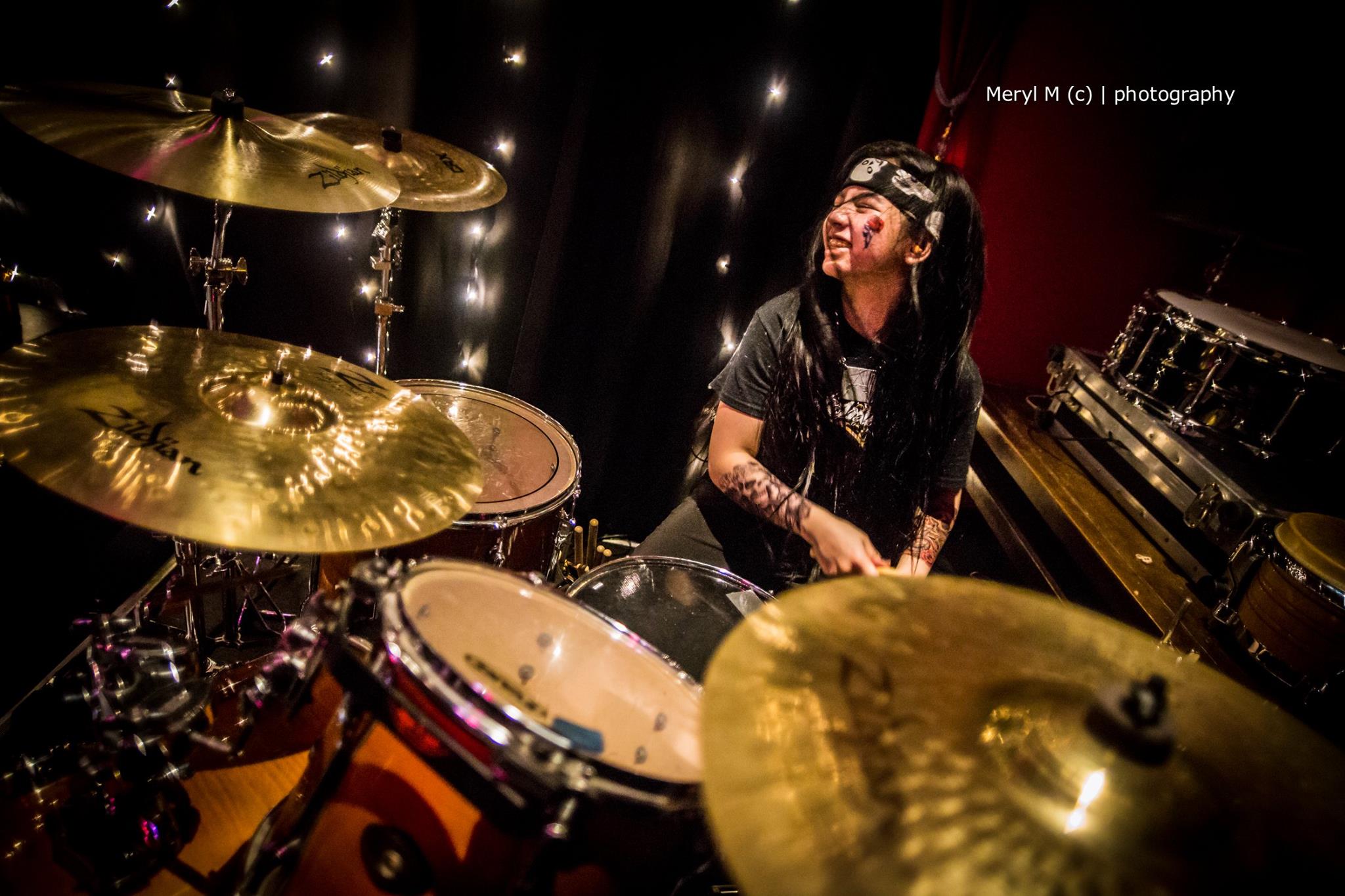